Veteran esports organization Immortals made a double shakeup of their League of Legends team structure last night. They announced on Twitter that the Immortals LCS roster would part ways with both head coach Thomas “Zaboutine” Si-Hassen (pictured) and general manager Keaton Cryer, with immediate effect.

The pair had been with Immortals since the org’s takeover of OpTic Gaming’s LCS spot, back when the league moved to a franchising format in 2018.

During the last split, Immortals finished 8th, narrowly losing a tiebreaker match against Dignitas for the final playoff spot. They started that season fairly well, picking up three back-to-back wins across weeks two and three. However, performances largely fell off from there. Midway through the season, they replaced starting bot lane player Johnny “Altec” Ru with IMT Academy player Apollo “Apollo” Price. This change clearly didn’t have the effect the Immortals coaches wanted, as the team continued to pick up losses. 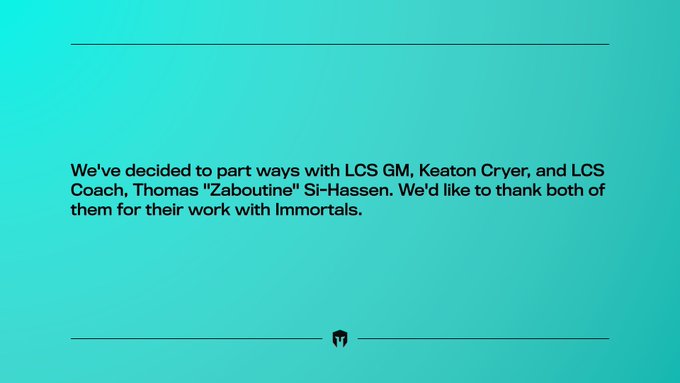 After two weeks of play with the new lineup, Immortals now sit in joint last place with Dignitas. They have an 0-4 record, including a crushing loss against CLG after going seven kills up at 10 minutes.

ESPN has reported that the replacement Immortals head coach will be current assistant coaches Adrien “GotoOne” Picard and Paul “Malaclypse” Decsi. However, this will only be on a short term basis. Ex-Los Angeles Valiant (Overwatch League) general manager Mike Schwartz will take over management of the team temporarily.

People have already speculated on Twitter about the future for Immortals midlaner Jérémy “Eika” Valdenaire after this change. Although none of the team has played particularly well this split, the imported midlaner has seen extra criticism from fans on social media. He has yet to post a positive score in their four games so far.