Last week, Pokémon Sword and Shield started an event where players could battle, but not catch, the Mythical Pokémon Zeraora in max raid battles. If over 1,000,000 unique players defeated Zeraora, everyone would get its shiny version. Players have completed that objective, and now everyone will be able to get it.

Zeraora is a Mythical Pokémon from Gen VII (Pokémon Sun and Moon). It made its first appearance as a Mystery Gift in Pokémon Ultra Sun and Ultra Moon. Zeraora is an Electric-type with a strong physical attack stat, and it has a unique physical Electric-type move called Plasma Fists.

This event is the first time since Gen VII that players could get this creature. Players eagerly responded to the task of defeating it in raids, and over 1.4 million have already taken it down.

How to get it

Shiny Zeraora will be distributed to everyone via the Pokémon Home app starting on June 29. To get it, you need to download the app on mobile to claim a Mystery Gift. In the menu on the mobile app, there is a Mystery Gift section. Zeraora will likely appear in the Gift Box. Make sure to stay tuned for the official release time, as it has not been given yet.

After claiming it, players can use the Nintendo Switch app to move it to Pokémon Sword and Shield or back to Pokémon Home. Zeraora is already compatible with the games, so you can transfer it over immediately. Remember, however, that it is a Mythical creature and is illegal to use in competitive play.

You did it, Trainers! Over a million of you have defeated Zeraora in #PokemonSwordShield! A shiny Zeraora will be arriving to all Trainers in #PokemonHOME on June 29! 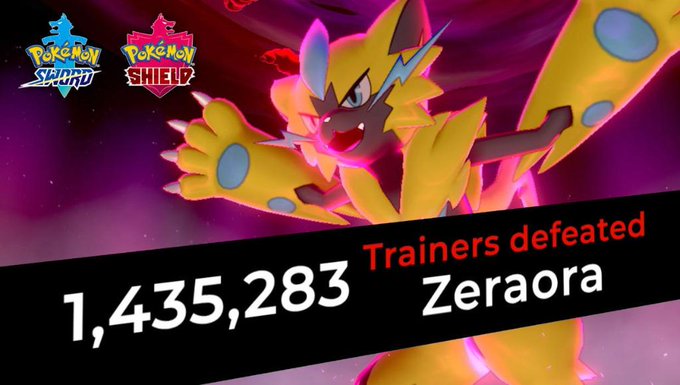 Beating Zeraora in raids is still beneficial for players. For every 100,000 players that beat it after the initial 1,000,000, trainers will receive a piece of Armorite Ore. You can trade this ore for special moves in the Dojo, as well as for watts to the digger on the Isle of Armor. So make sure to beat Zeraora if you haven’t yet!