What are the best classes in Tactics Ogre: Reborn? It's such a simple question. One that we wager many players, new and old, will look into. The reality is that every class functions within parameters that aren't so niche that it ever becomes unusable. This is great news overall, but it makes ranking them rather more difficult than if there were blatantly mediocre jobs to ignore.

Still, there is something of a hierarchy of classes in Tactics Ogre, and we're going to jot down the ones we feel are the cream of the Valerian crop. 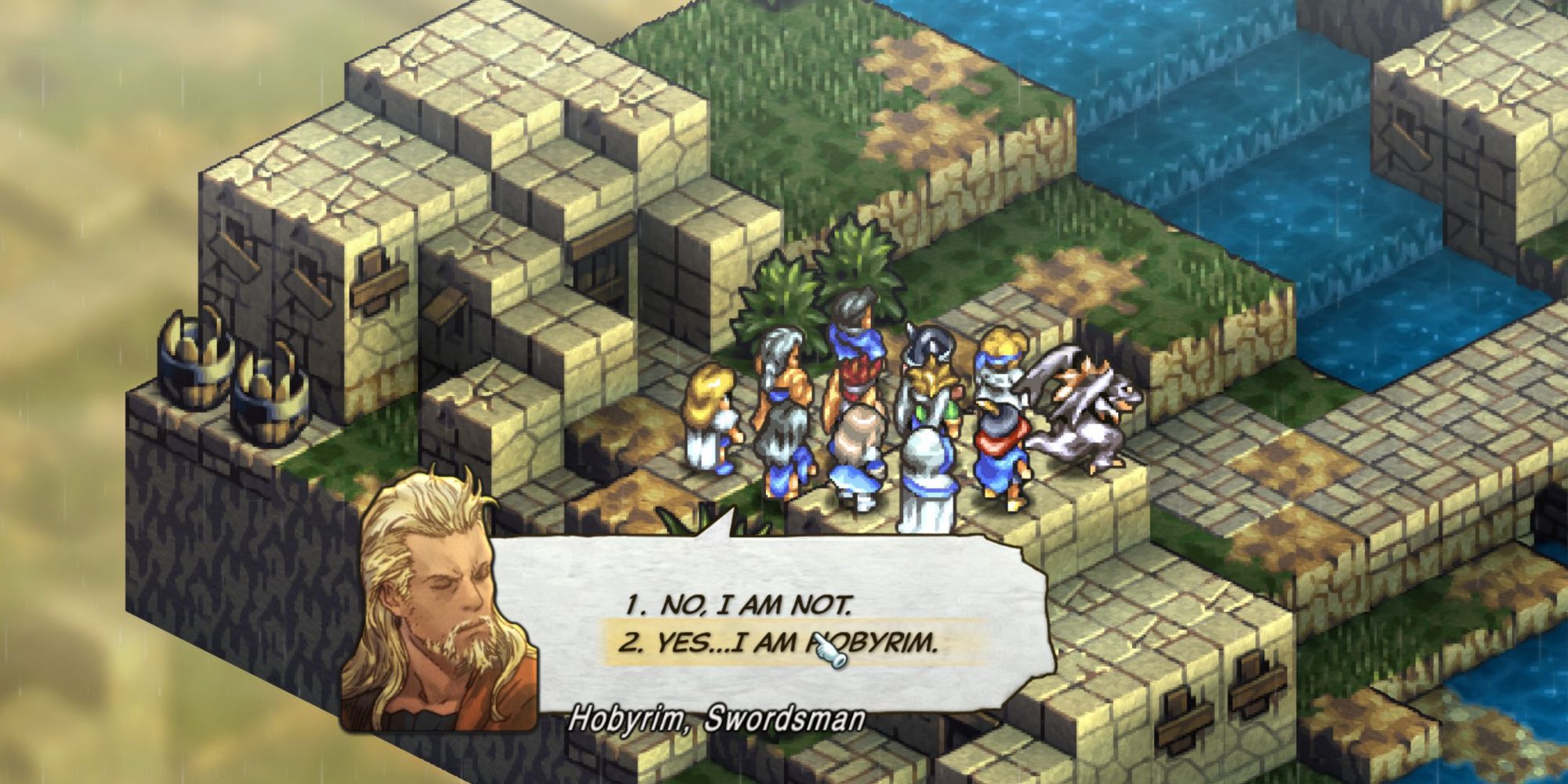 Swordmaster narrowly slashes its way into the list thanks to a strong combination of damage output, utility, and — we're going to say it — coolness. There's not much reason to train one when Hobyrim eventually joins, except if you accidentally get him killed in his recruitment battle, in which case, rude?

These flashy two-handed katana-wielders can support your squad by strengthening every ally within a fairly generous range through Lion Dance. They can also remove debuffs with Shriving Dance and fortify defenses with Bellows Dance.

In the PSP version of Tactics Ogre: Remake, Swordmasters were decidedly less exciting, as their best ability, Preempt, had to be manually initiated. Now that it's a passive skill with a high trigger rate, you can safely presume they will preemptively (heh) counter enemies every time they're struck physically, for a good amount of damage at that. 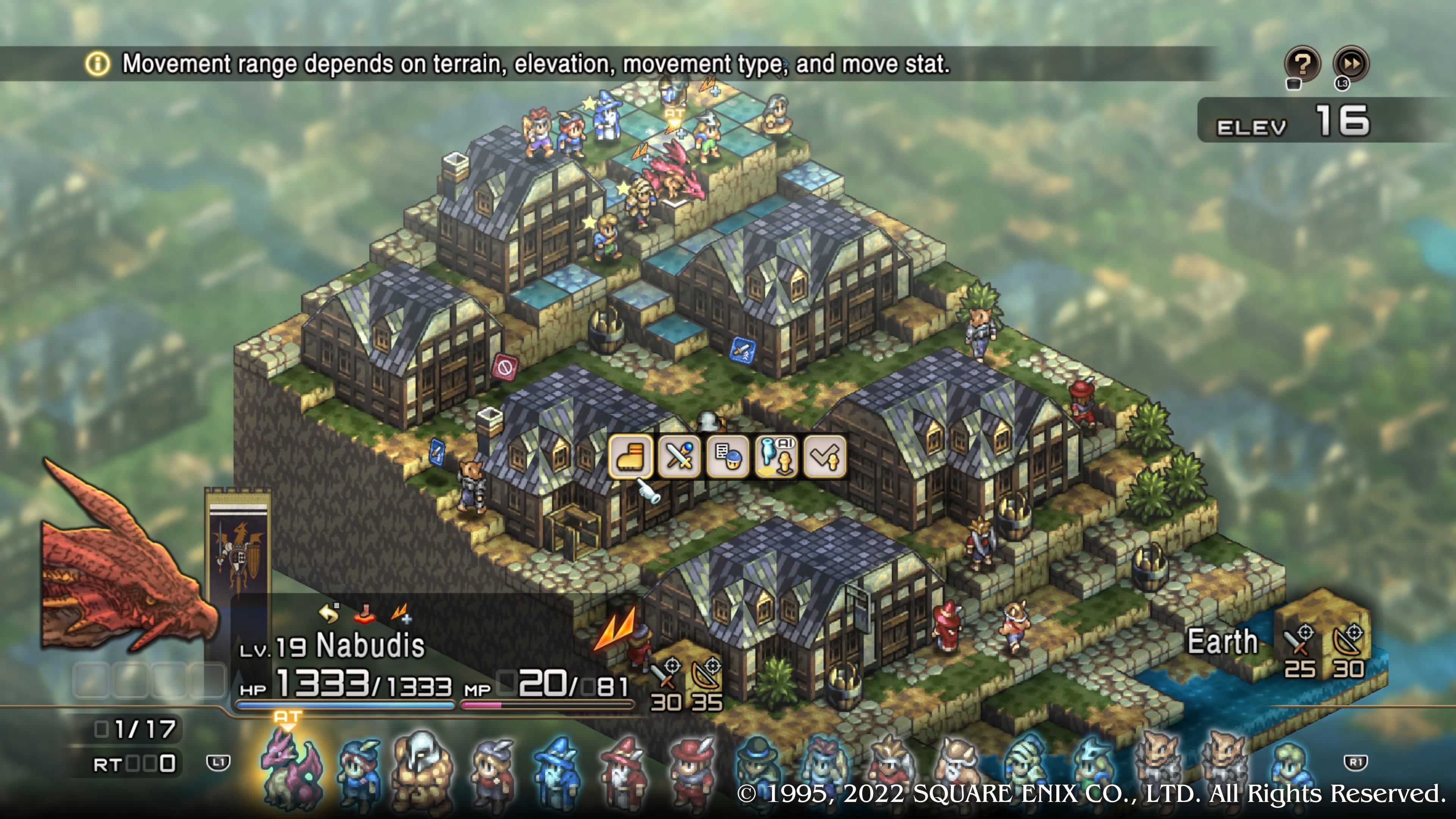 No matter their element, Dragons are terrific when you need a stubborn wall to block and distract several foes in a narrow space or even out in the open. Their wildly high HP makes up for middling defensive stats, and whenever the Dragon Scale passive skill triggers, their defense situation is resolved entirely.

Dragons draw a ton of attention. The enemy AI seems obsessed with taking them out, which takes the melee attacker pressure off many of your other party members. They're also perfectly built to slow the approach of deadly creatures like Golems, Cyclops, and fittingly enough, other Dragons. 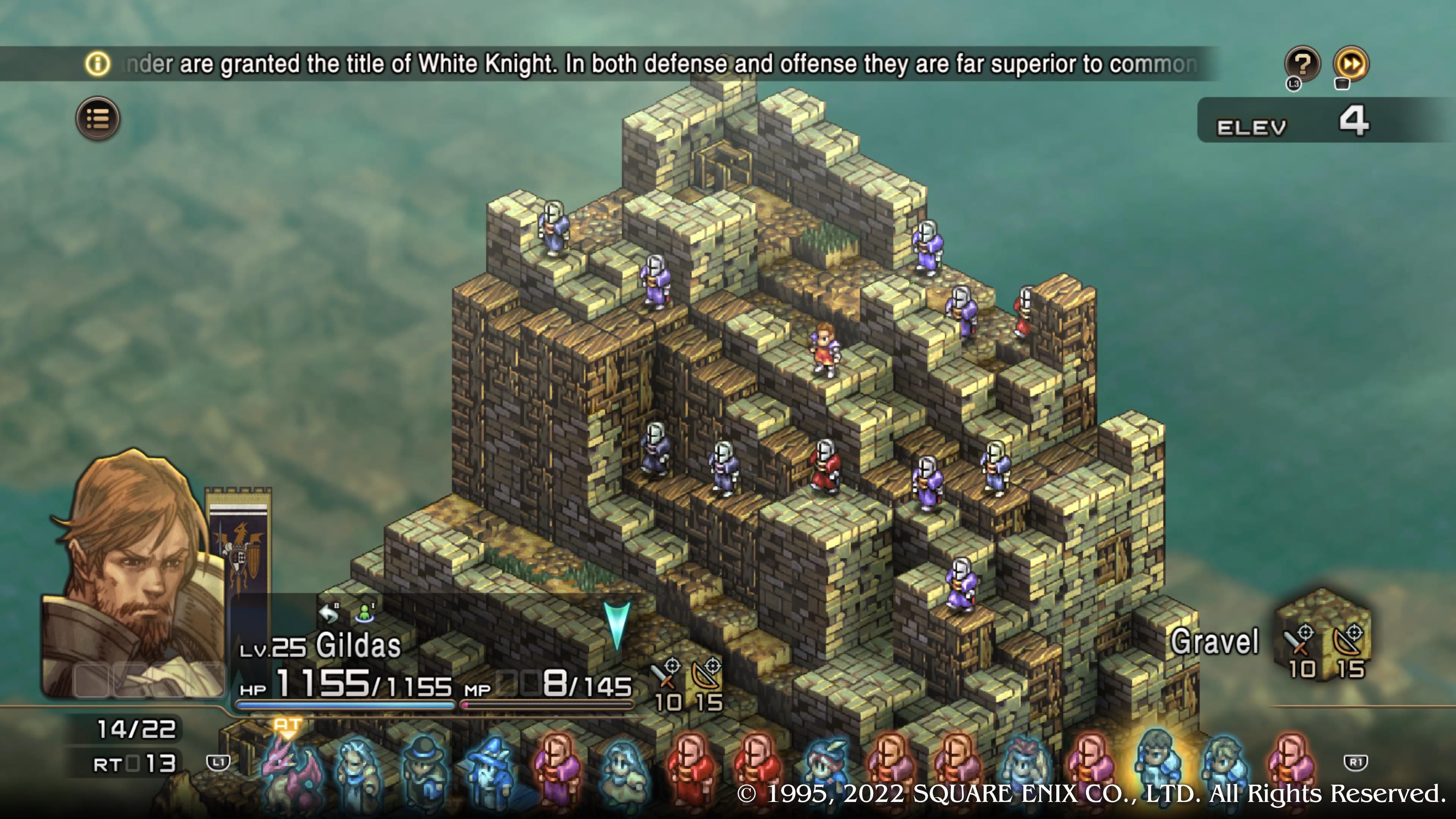 The White Knight is mostly a souped-up Knight. And Knights themselves are a hardy lot, well worth having a pair of them at all times once you've acquired some. White Knights are stronger, with a better overall arsenal of skills. Paralysis Blade grants Stun-Bringer, useful for preventing enemies from taking actions. Velocity Shift reduces the RT of nearby friendlies by 35, significantly hastening them.

They've also got Rampart Shadow, Rampart Aura, and Sanctuary Shadow, all knightly must-haves. So, why did we say they're mostly a souped-up Knight? White Knights lack Phalanx, which means they're technically more fragile than their ordinary underlings. We consider it well worth the trade-off, though, for Tactics Ogre: Reborn's best overall tank. 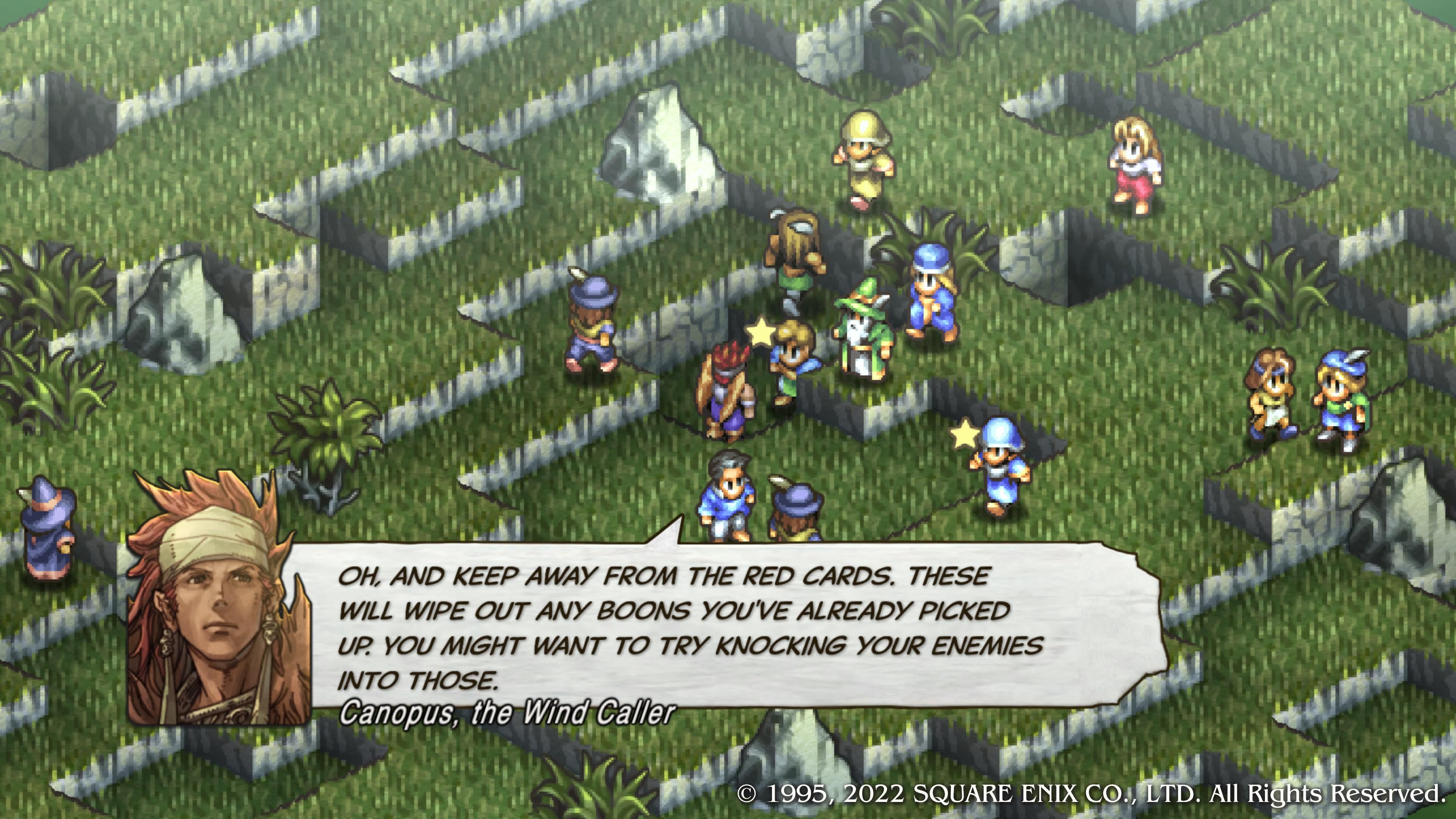 The default class for the charming Canopus, Vartan offers choice that few classes can rival. The ability to equip shortbows and crossbows in one hand and a sturdy axe in the other gives Vartans physical damage output both up close and from afar, and once they've learned each weapon type's Finishing Moves, they're handy for joining the frenzy when you're ready to kill a boss and end a battle.

Vartans have access to missile-style spells as well. Canopus' Intelligence stat isn't the greatest, but Deadshot II can still help in a pinch. Plus, they fly. Flying rules. 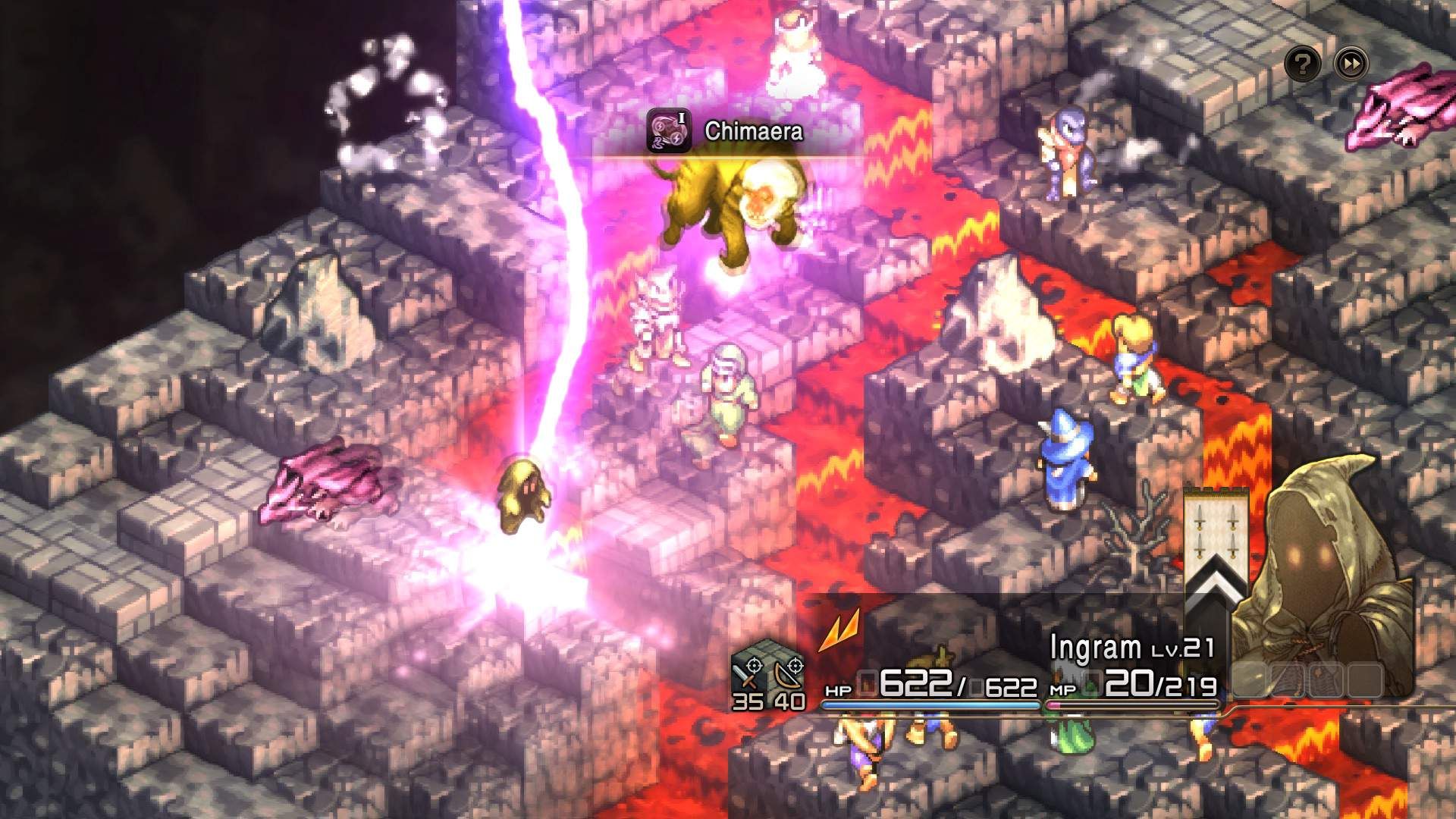 Men are Ninja. Women are Kunoichi. But you could call them Kuninchi for all it matters. The point is they're rad. They can attack twice, which in fairness isn't exclusive to this class. But the ability is practically defined by the Ninja as a rule, and they're naturally more gifted with it than most. Plus, Steelstance can cover them up from being a bit too squishy otherwise.

Ninja fully shine, however, through the use of their Ninjutsu. Many of these are area-of-effect spells with a wide variety of damage types, like Crushing, Slashing, and so on, in conjunction with elemental attributes. Others can buff allies with rare treats like Nimble, Waterwalk, and Nullify. They've also got access to Stun-Bringer and Envenom, just to add insult to significant injury. 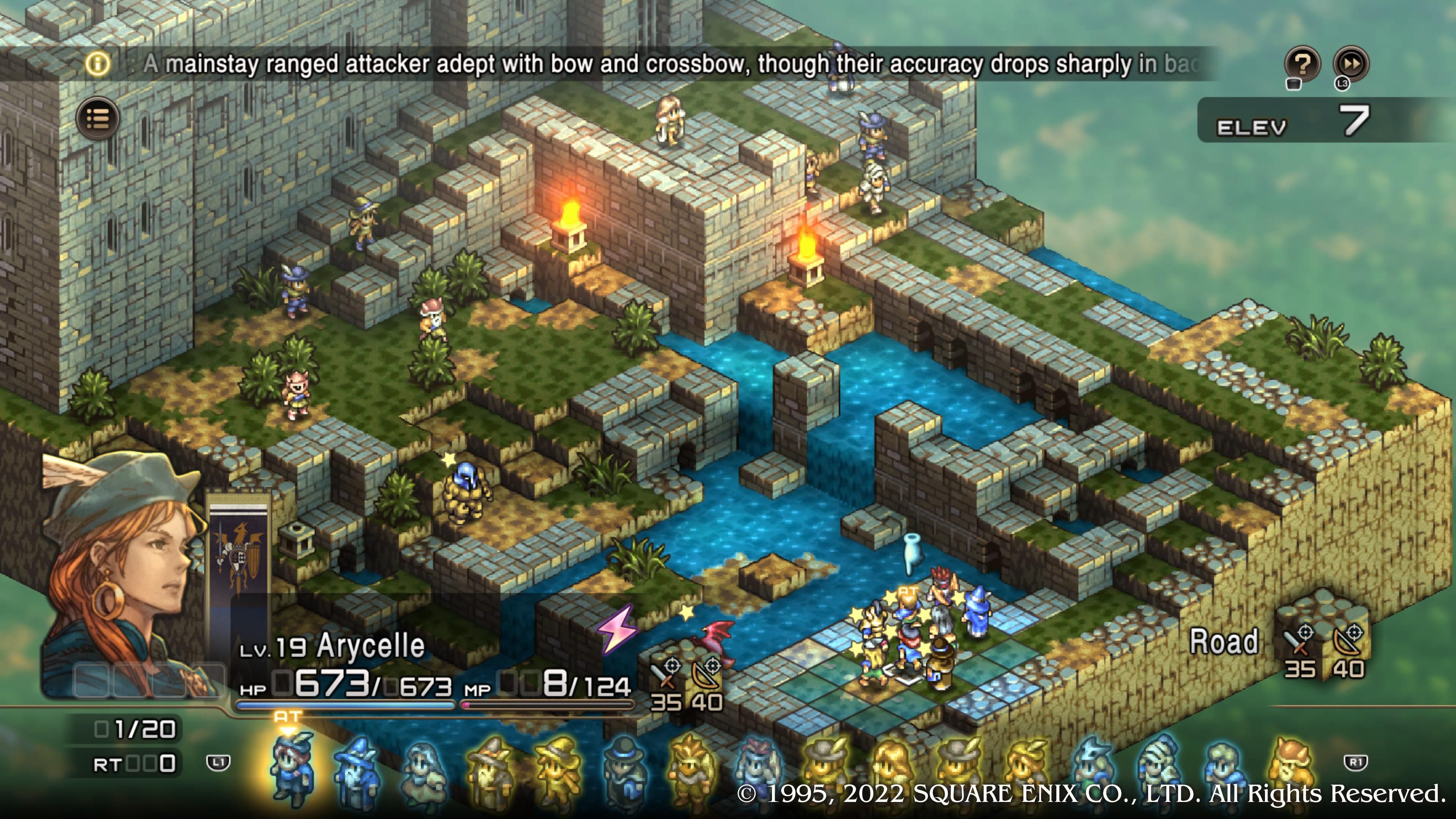 The Archer isn't very good… in Final Fantasy Tactics. Perhaps it's because Yasumi Matsuno and his crew used up all their Archer-boosting energy on the previous game. (Hint: It's this one. It's Tactics Ogre.) With maps this big, and plenty of enemy Archers to hassle you from afar, it's a fight-fire-with-fire scenario in full.

Among Archers, it's Arycelle you'll want as a mainstay. Unique units have better overall stats, after all. Just let her be exactly as she comes pre-packaged; a couple of buff cards into a fight, and the lass will be walloping all but the sturdiest units at a safe enough distance to laugh. They're also rather agile to boot.

Archers aren't the flashiest of classes, so you sort of have to see the hype to buy into it. But once you get into the rhythm with one, you'll suddenly wish you had more. 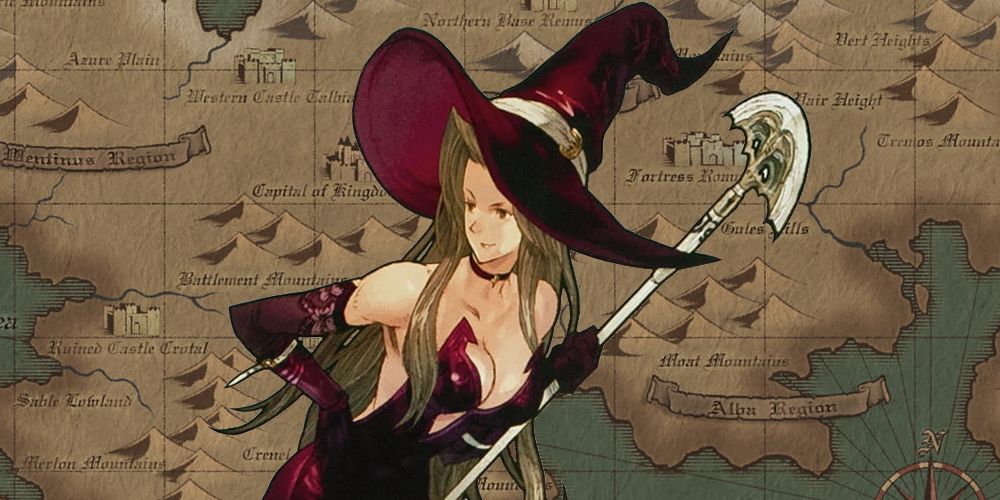 Wicce is exclusive to Deneb, the Ogre Battle icon if ever there were one. Snarky and comical in a series that is commonly anything but, she and her pumpkin obsession stick out like sweet thumbs in a sea of violent, war-stirring middle fingers.

That's great and all. But we're talking about Wicce. Well, let's put it this way. It has the enormous downside of being a colossal pain to get. Recruit Deneb without fulfilling its conditions, and she'll just be a plain ol' Witch. Not that Witches are bad. But Wicces are fantastic. Wicce Deneb is so fantastic, in fact, that we consider her class hands-down one of the best despite the laborious obtainment process.

Maybe we should actually mention why we love Wicce. Remember roughly a minute ago, when you read that White Knights are mostly souped-up Knights? The Wicce is entirely a souped-up Witch, which is, by extension, an entirely souped-up Enchantress. It's like the Blastoise to a Wizard's Squirtle. Better in every single way. 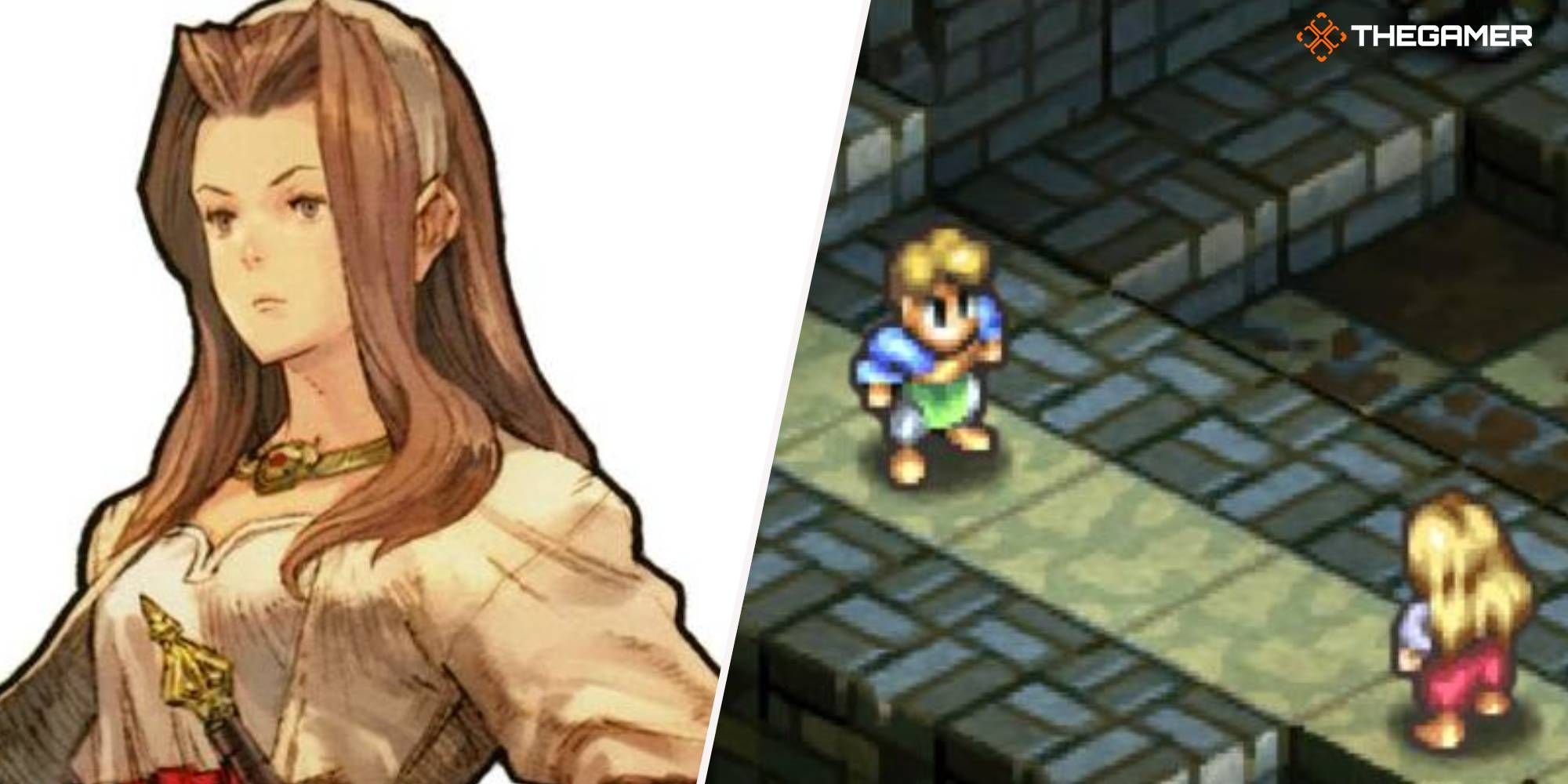 You may notice a distinct lack of Cleric-speak here. Clerics are invaluable. Until they aren't. We're not saying ditch Donnalto entirely, per se. But when healing items entirely eclipse the handiness of all but the multi-target Major Heal (and even then it's arguable), plain old Clerics just aren't cutting it.

Princess, one of Catiua's three potential classes (and for our money, her strongest), combines everything that makes Clerics tick into an all-encompassing wardrobe featuring high damage output, decent defensiveness, sword-wielding, and a veritable smorgasbord of elemental magic (with the stats to back them up, no questions asked). 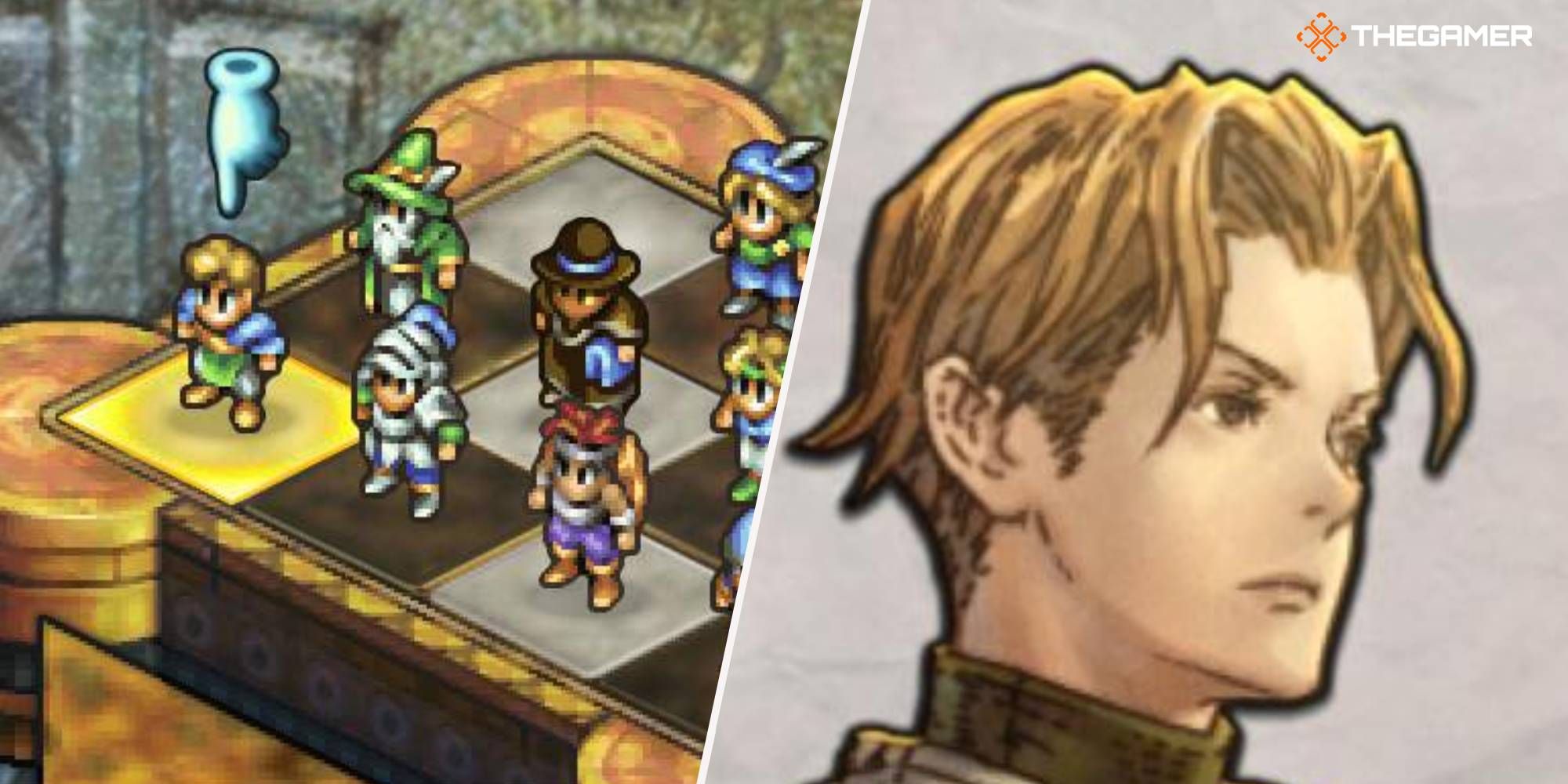 It's lamentable that you can only get the Lord class by missing out on Catiua's Princess class. And a lot of other things, most of which are too spoiler-y for this humble article. The Lord isn't just the most versatile class in Tactics Ogre: Reborn. It wins the award by miles.

If you're familiar with Final Fantasy's Freelancers and/or Onion Knights, you'll know they have access to pretty much everything from other classes. That's the Lord, except with base stats to best every ogre there ever was. The range of options is staggering. There is justification to consider every possible element, though Light likely jives best here.

Immense damage, excellent endurance, Phalanx, Mighty Impact, and more — it's almost scary how good they are. 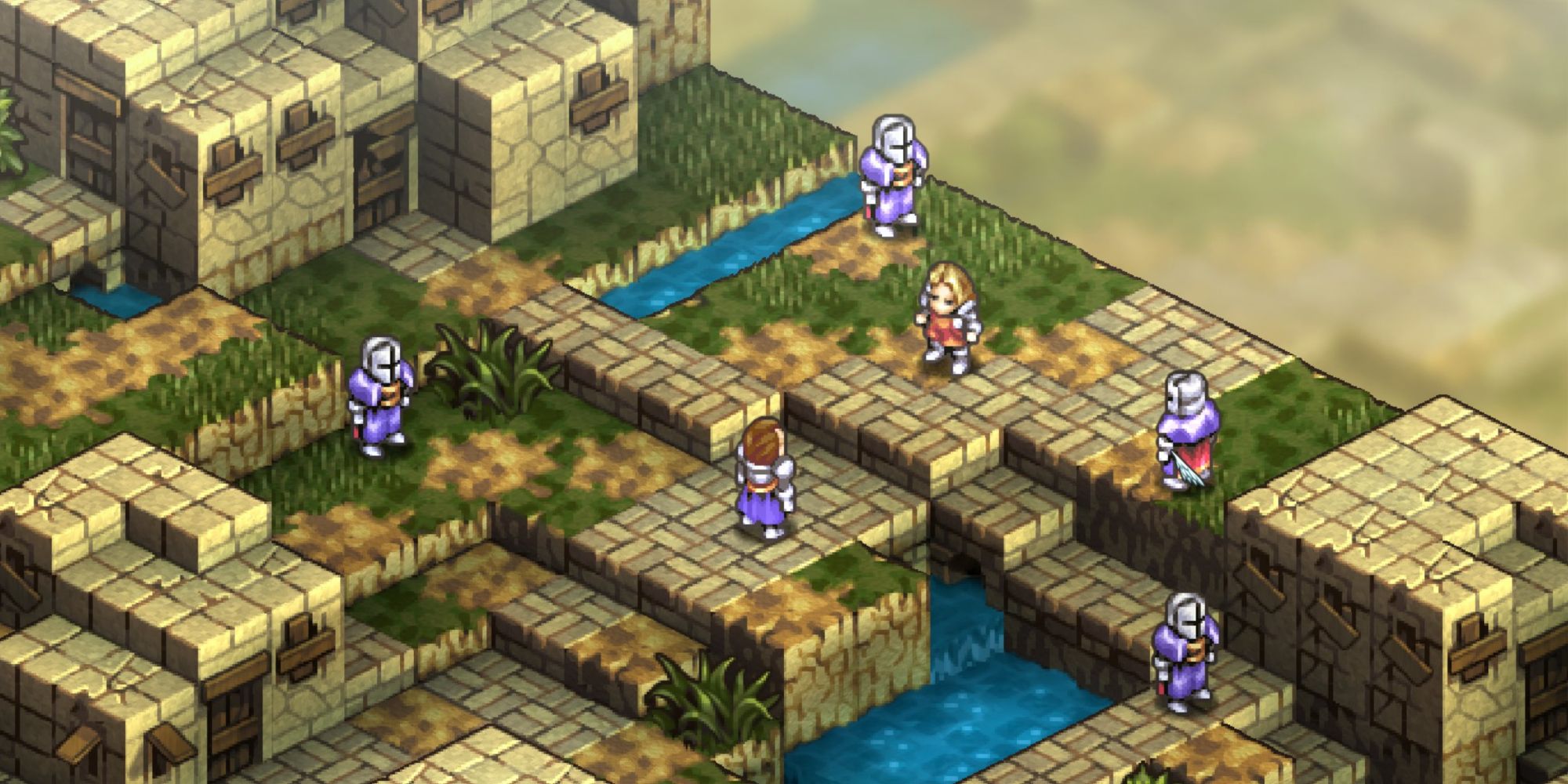 By contrast, it is scary how good Knight Commander is. This class is exclusive to Ozma, who is in turn exclusive to the Lawful route. Those asterisks do add up, but seriously, if you are going Lawful, recruit Ozma. Once you do, dare to deploy her in a training battle. You will never, ever take her off your team.

Knight Commander has most of the Lord's versatility, but with even greater pain potential. It's also lightning-fast. Ozma is the swiftest character in Tactics Ogre: Reborn, meaning her class suits the bill to a tee. With access to Double Attack and a ravaging arrangement of special powers, Knight Commander is without peer. Ozma, you are sublime.