God of War Ragnarok is here, and it proved to be another great entry for this series, which isn't such a surprise, really. Still, Kratos and Atreus end their journey as the game prepares itself for the future, which can lead to wherever the developers can imagine. All that said, this game has a lot stuffed into it, so there's much you can do before you start wishing for more.

That also includes a lot of secrets, from Easter Eggs to interesting information saved for side missions rather than the campaign. Bear in mind this list will contain some spoilers, with one containing a big plot twist. This one will be left at the end of the list, but you've been warned. 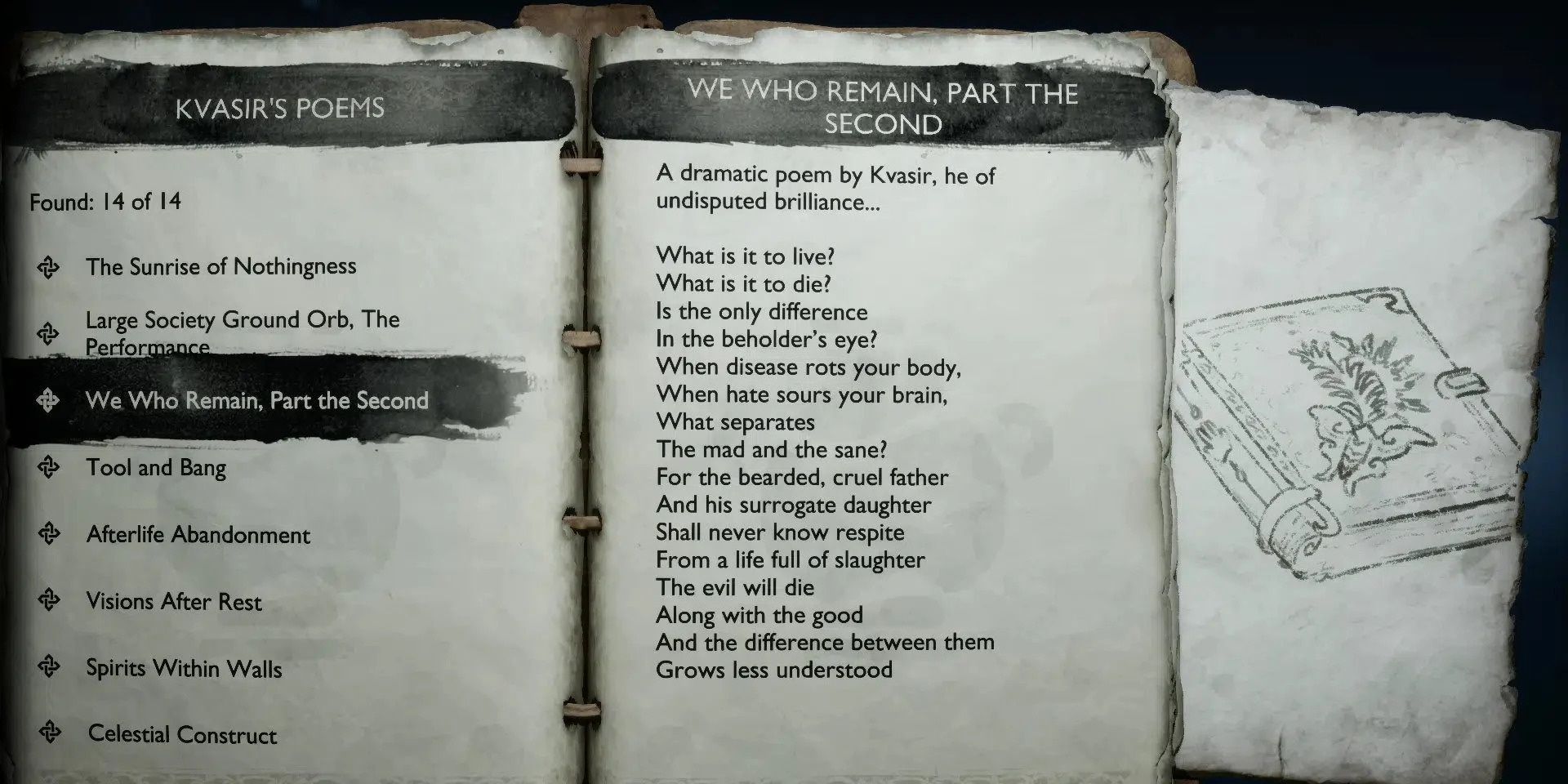 One of the many collectibles in this game are the poems of Kvasir, a Vanir God born of the saliva of all the Aesir and Vanir Gods combined – though that's in the mythology, and the game doesn't explain or show anything of this guy other than the poems. Whenever you collect a poem, you can read it. If you pay close attention to them, you'll see that there's more to them than rhymes.

Each poem talks about a different Sony exclusive IP, from The Last of Us Part 2, Ratchet and Clank: Rift Apart, Bloodborne, Horizon: Forbidden West, among others. They even have one for MLB The Show.

9/10 You Can Get Ratatoskr Angry 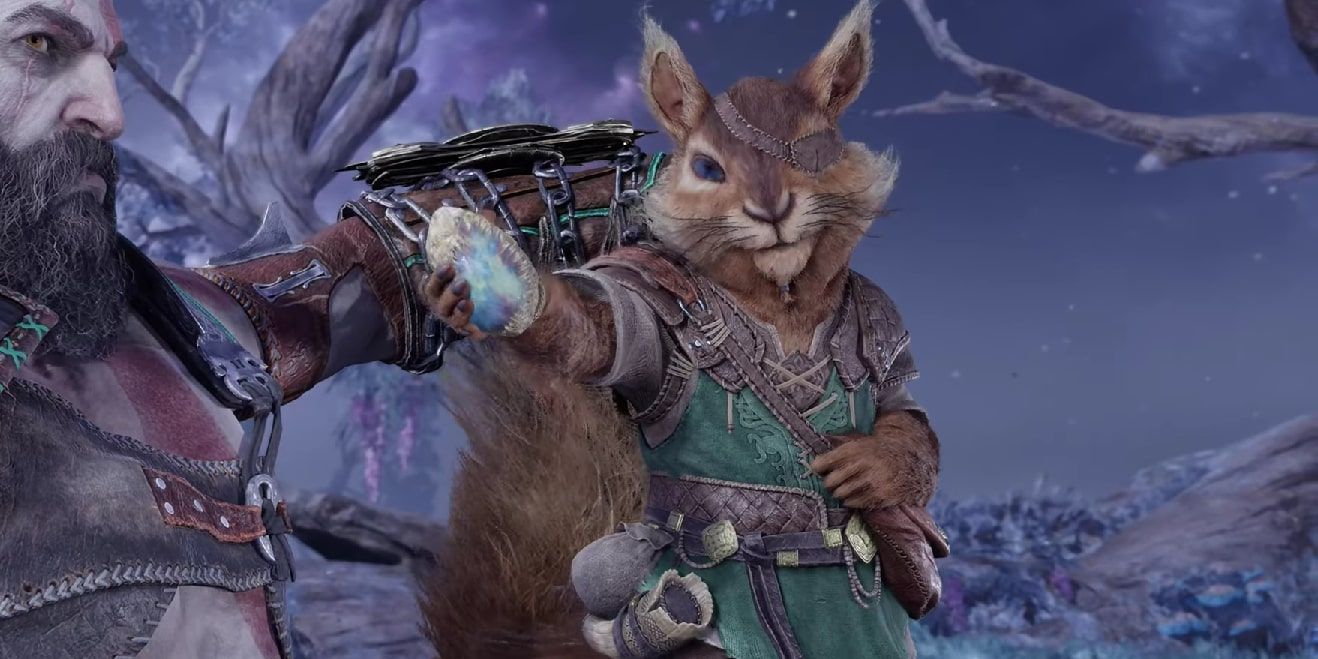 At Sindri's House, you can talk to the 'owner' of Yggdrasil, Ratatoskr. He is quite a fun character to have around, and he also offers some side missions for you to venture through. Since he's a busy, well, man, you have a chime to call him whenever you need to talk to ask or deliver a side mission.

The fun part here is that nothing stops you from hitting the chime over and over, even if he's already there. What's he going to do against the retired God of War? He'll get angry, that's what. If you keep annoying him repeatedly, he'll have many dialogues about it, and he can get quite angry.

8/10 The Other Frozen Lighting In Vanaheim 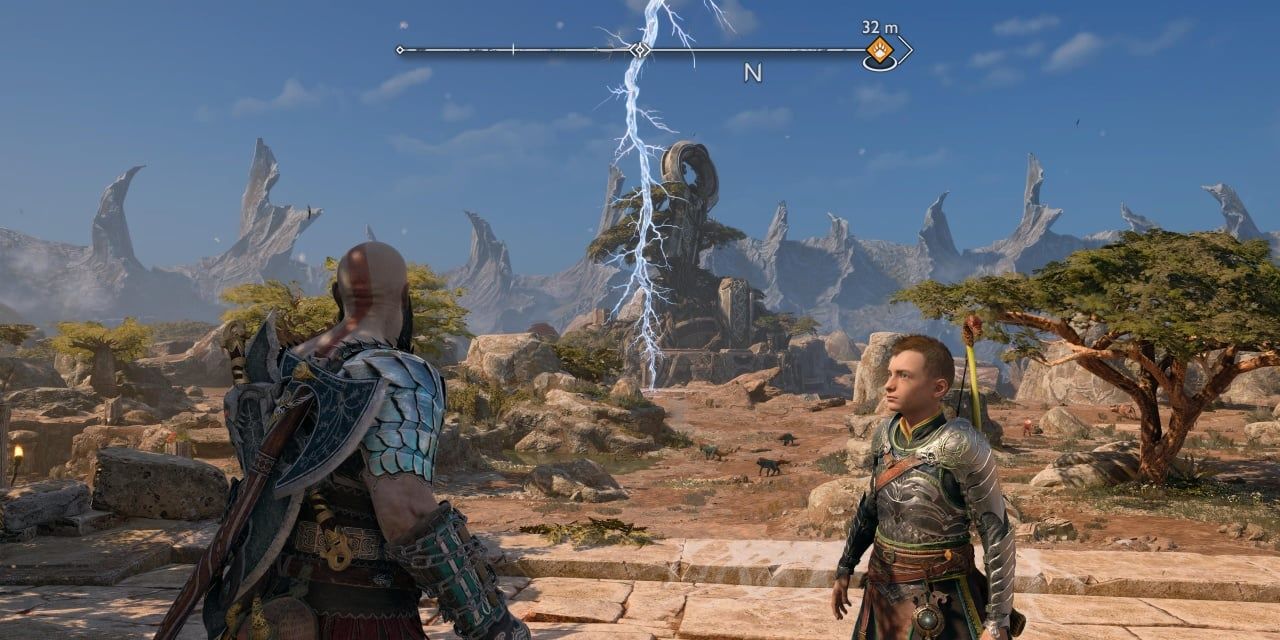 During your first fight with Thor, the collision between Mjölnir and the Leviathan Axe causes a frozen lightning "tree" of sorts. It goes from the ground up to a cloud above, which also appears to be frozen in its place. It's a beautiful detail that shows the power of the axe, as Brok and Sindri state that their idea was to forge a weapon that could stand up to Mjölnir (a job well done). However, when that happens, Thor comments about that being familiar.

If you venture through Vanaheim after beating the game, you'll find another frozen lighting tree over there. We'll save you from the details, as spoiling things are not fun, but you can investigate the area around it and find out where it came from. 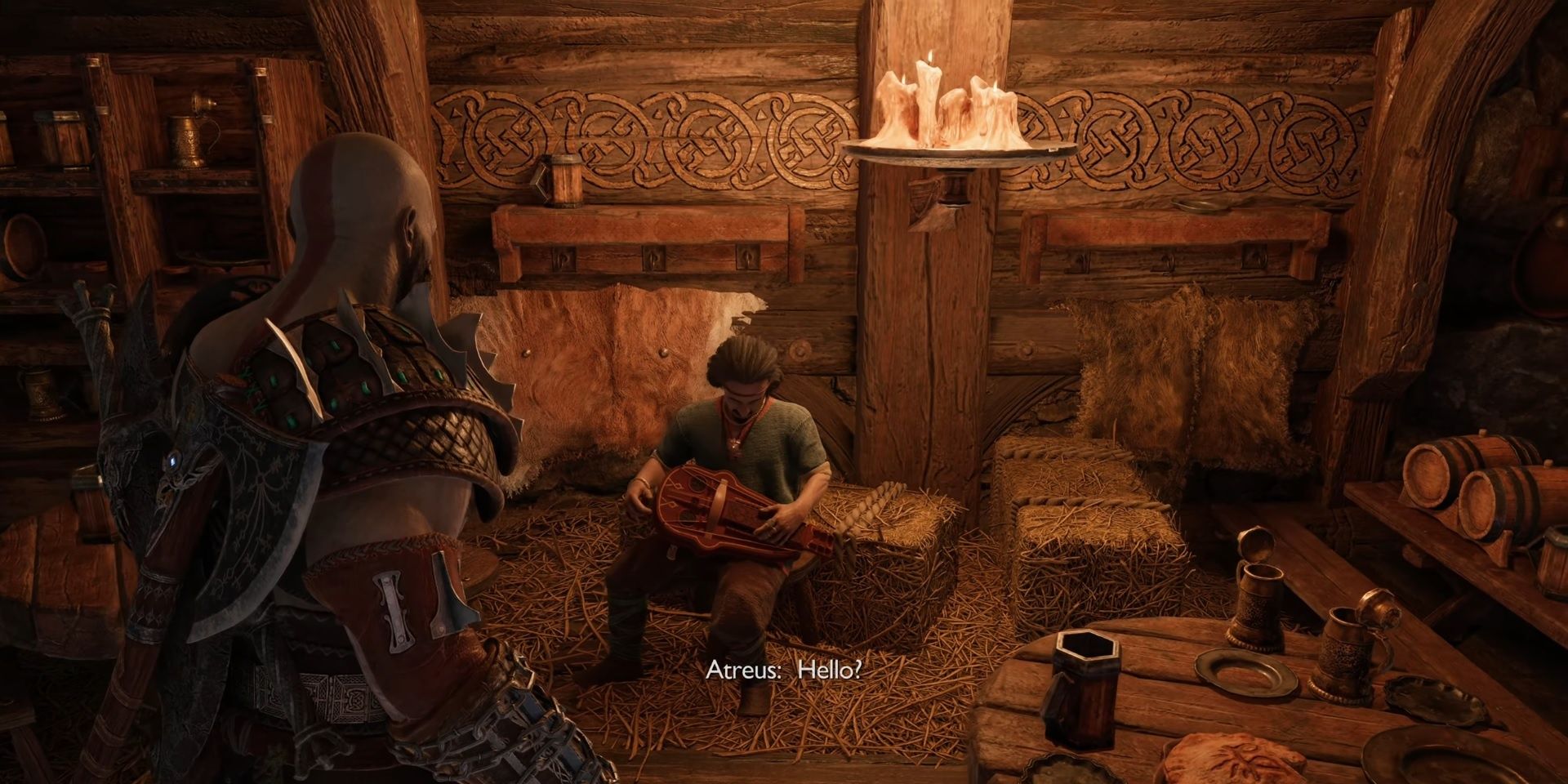 During your adventure in Svartalfheim, the land of the Dwarves, you find many (you guessed it) Dwarves. One of them is a musician called Ræb, or Raeb. He appears playing a song in a tavern, giving you directions for the main mission and being the first character to provide you with a side mission, introducing us to the concept.

But the fun part here is that the character is actually played by Bear McCreary (Ræb, Raeb, Bear, get it?), who is the composer of many movies, series, and games, including this game and the previous God of War. So the game decided to honor him by having him be a musician in the series itself, which is a fun Easter Egg and quite the honor.

6/10 The Boat Captain Is Referenced Once Again 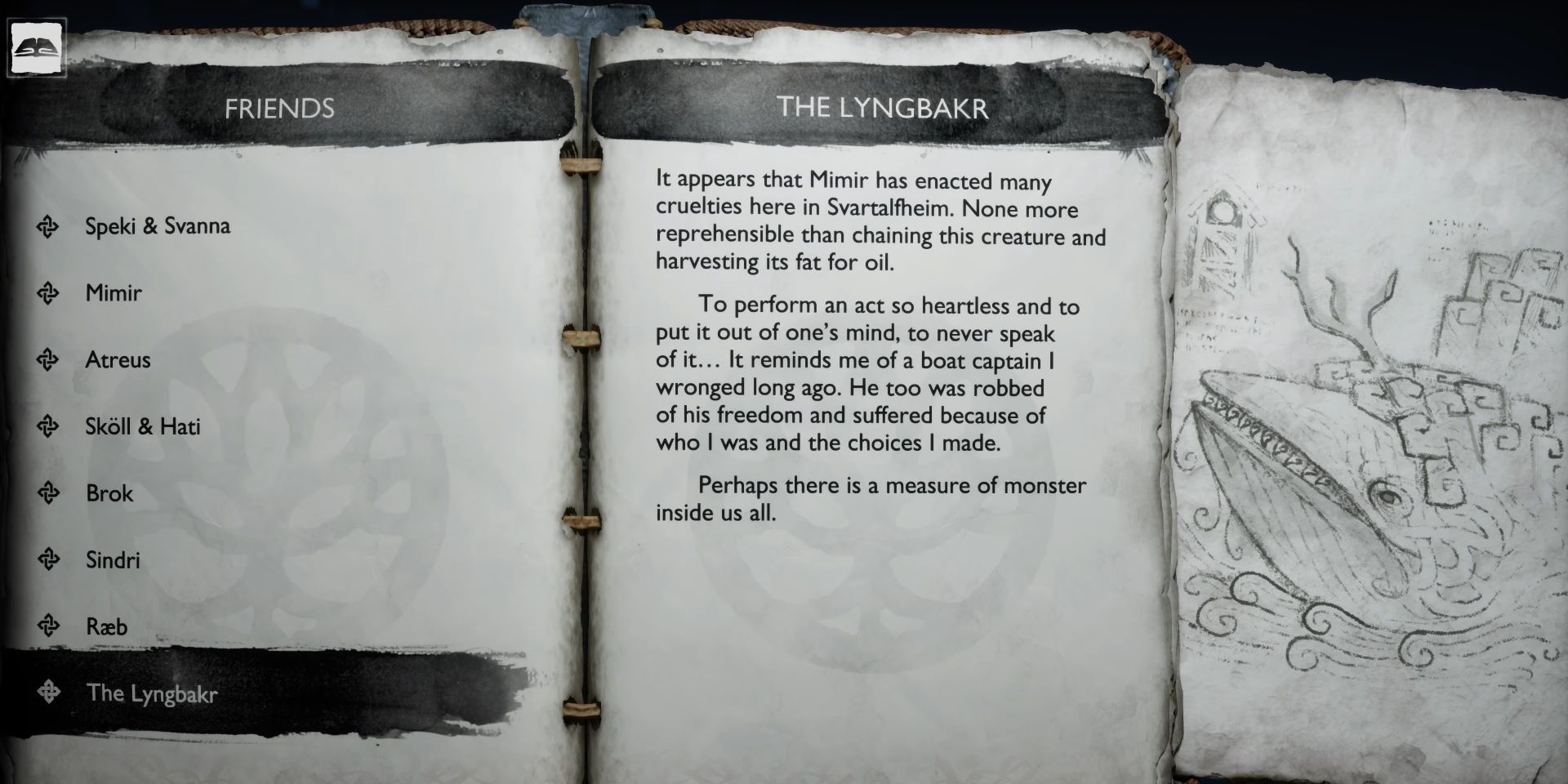 It's a trend that the Boat Captain from the original God of War always manages to get a reference somehow. Killed by Kratos in the first game in a situation where Kratos could've easily saved him, it's yet another thing our favorite God is ashamed of from his past.

During the side mission where you save the Lyngbakr – the whale-like creature in Svartalfheim – The notes Kratos writes on his codex reference "a boat captain I wronged long ago." It's sweet to see Kratos still think about the innocent civilians he's wronged in his life. 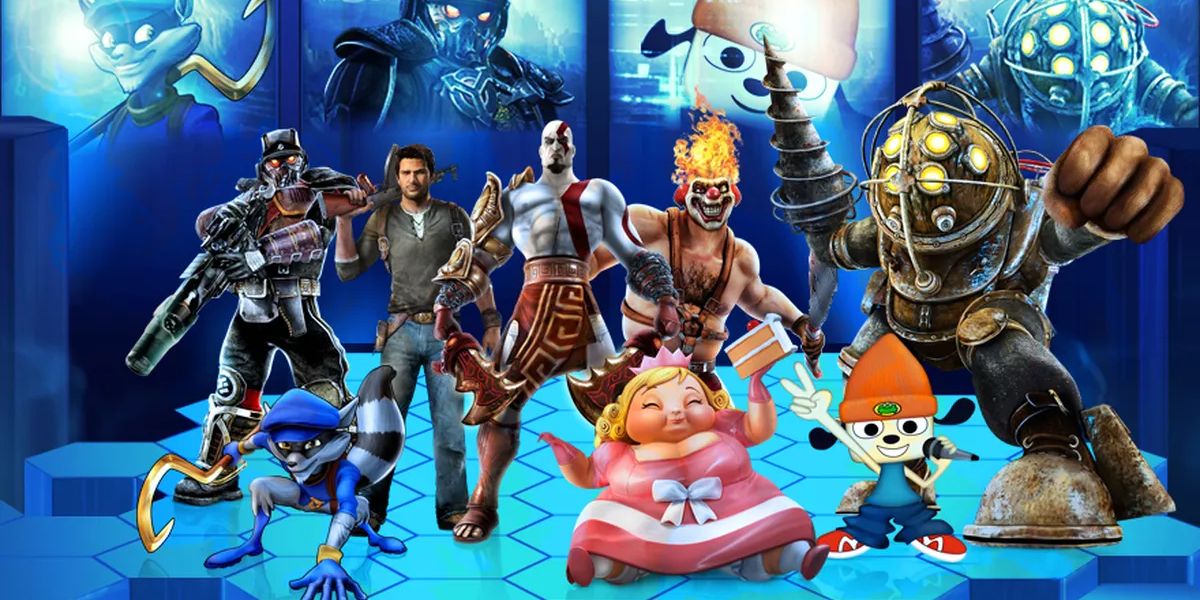 During one of the many boat conversations between the characters, Mimir asks Kratos about him being part of a tournament that featured "beasts, scoundrels, princesses, the undead, automatons, and history's greatest musician." That references Kratos's participation in PlayStation All-Stars. Some fans also linked it to being a Mortal Kombat reference, as he also participated in it, and a lot of these people could be assigned to both games. But the musician part doesn't have a counterpart in Mortal Kombat, and it could be a reference to PaRappa the Rapper.

Beasts could allude to animal characters, such as Ratchet and Sly, scoundrels to the likes of Evil Cole or even Nathan Drake, and princesses are Fat Princess, with maybe Nariko stretched here too, hence the plural. We have Sir Daniel Fortesque as the undead, Clank is an automaton, and Big Daddy and Sackboy could be mistaken as automatons too.

Norse Mythology fans probably know this one already, but in the myths, Loki and Angrboda are married, and two of their children are Fenrir, the giant wolf, and Jörmungandr, the Giant serpent. However, this series is known for taking creative liberties, and, let's be honest, they wouldn't make characters so young to father children already. Hence, the new origins for these two.

All that said, they were 'born' out of Atreus putting souls in different bodies, one of these cases with Angrboda's help. So, in a way, they 'fathered' these children.

3/10 You Can Try To Eavesdrop On Odin And Heimdall 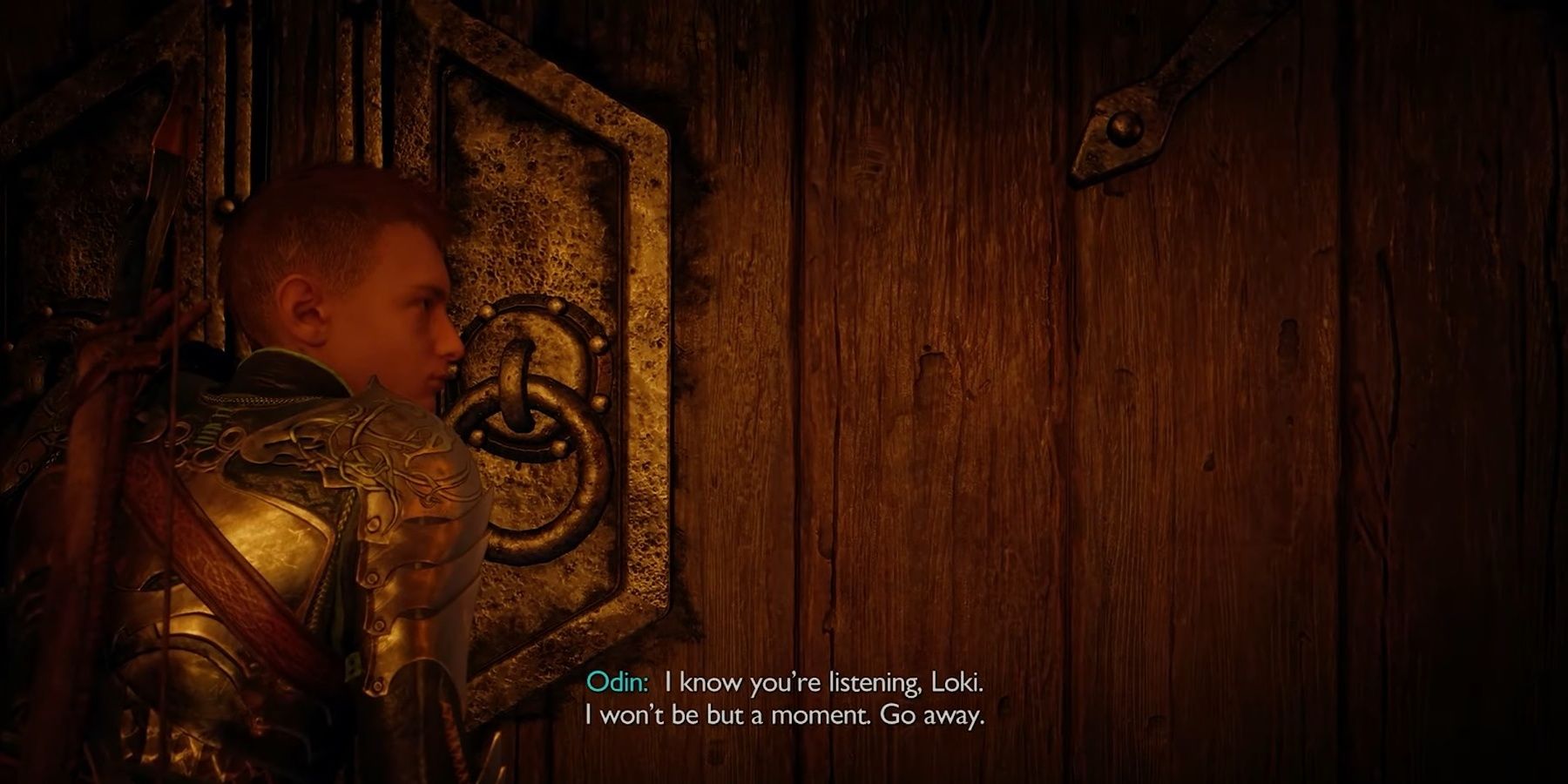 When you're in Asgard as Atreus, you help Odin complete a mask that will allow them to get information on how to stop Ragnarök. It's all fine and good until you screw up and release a powerful creature called Garmr.

As Heimdall and Odin discuss that (among other things) alone, you can try sneaking up by the door and eavesdrop on the conversation. They will notice it, though, and tell you to back off. 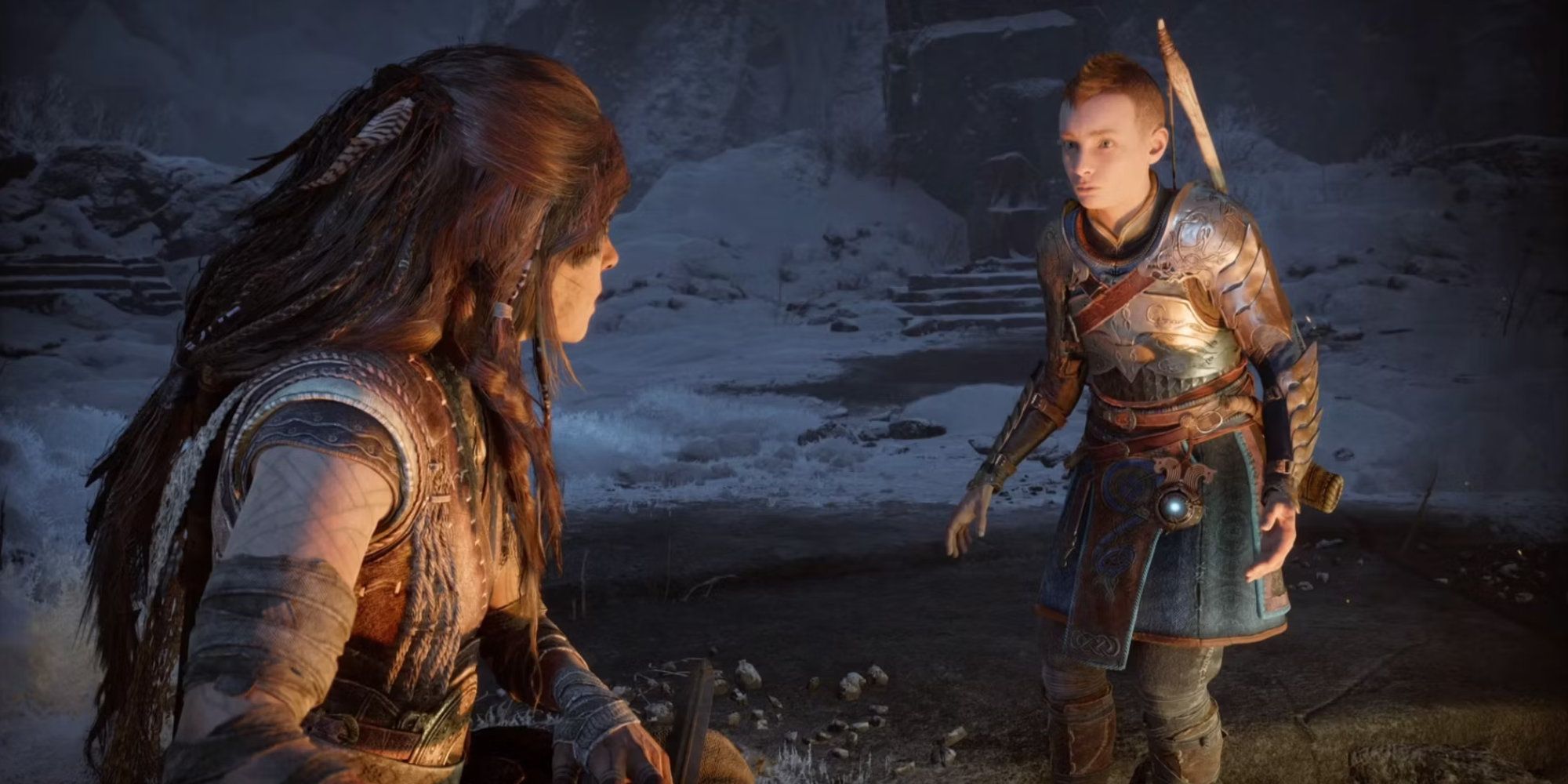 Similar to the previous game, you have the main campaign to do as well as side missions that unlock as you progress through the story. Depending on the type of player you are, you're either going after the side missions as soon as they're unlocked, or you're going to worry about these things once the main story is done.

However, as you complete the game, Atreus and Kratos go their separate ways, and Freya becomes your companion throughout the rest of the game. That means the game itself doesn't know if you're taking Atreus or Freya during some of the side missions. That is why sometimes Atreus or Freya can be a bit quiet, having most of the dialogue be between Kratos and Mimir, and also why the dialogue is written in a way that regardless of what Atreus or Freya says, Mimir and Kratos' answers will be the same. 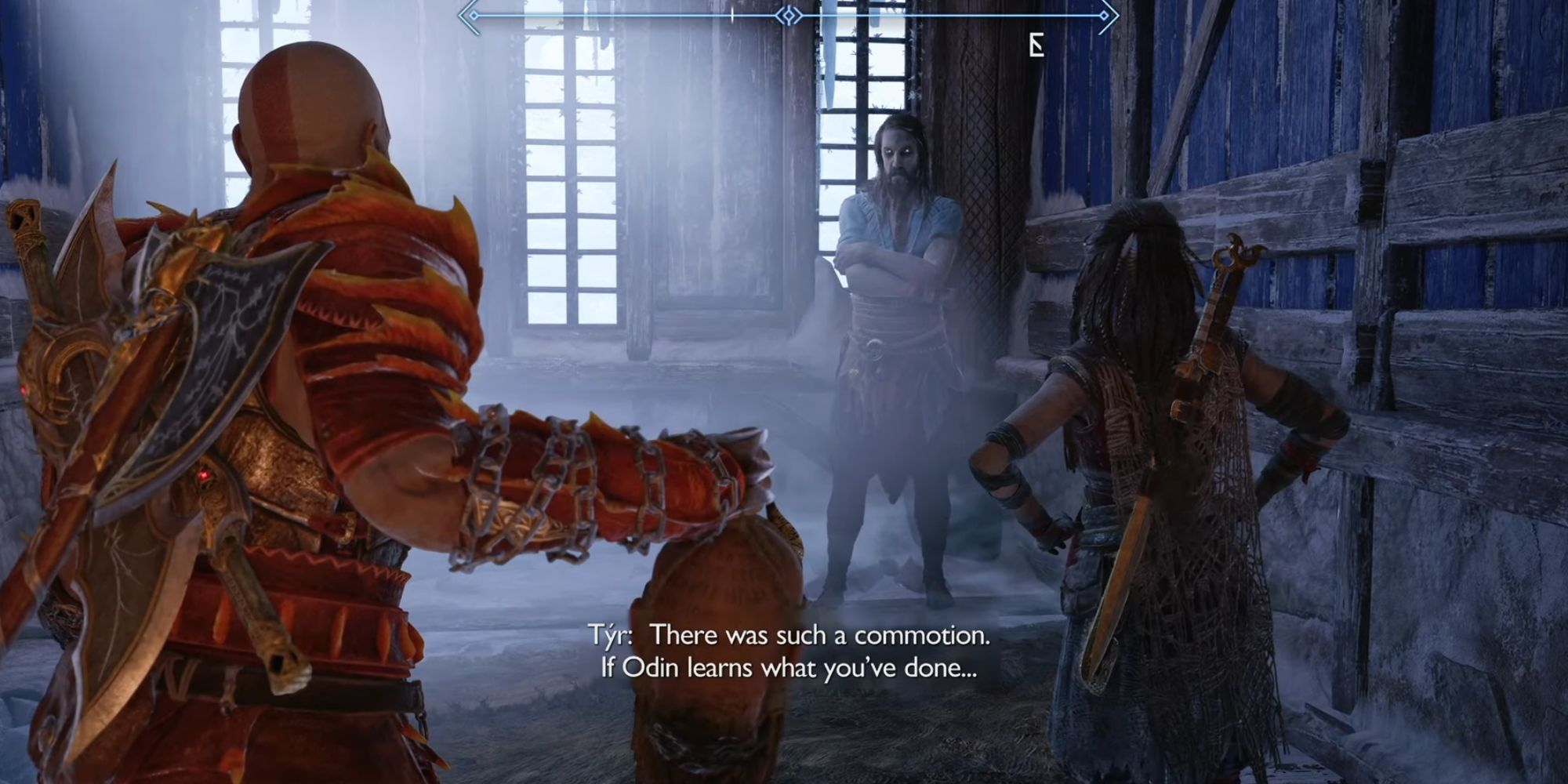 Now for the heavy spoiler mentioned. During the campaign, we find out that the Tyr we've freed was, in fact, Odin in disguise, as he kills Brok and escapes. However, after the end of the game, you can find a secret prison in Niflheim where you find Tyr. For real, this time.

Once he's free, you can find him wandering about throughout the other realms as you update him on a few things and talk to the guy. Still, this only happens after the campaign is over, working as a very extra thing to do, and besides the prison part, there is no side mission to search and find him, so you'd just be doing that for your pleasure.