Splatoon has always been a series about hidden depths. Every game seems to be a simple competitive sport about squid kids shooting ink at each other on the surface, but below that is a veritable iceberg of lore and implications. For those who love to dig deep, there are secrets everywhere.

Splatoon 3, in particular, is bursting with lore tidbits and cool details. It's fitting, given the major implications the game's story has for the overall lore. Still, a few tasty nuggets may have slipped your notice if you didn't opt for thorough exploration and completion of the game's Hero Mode campaign and beyond.

Please be advised that we'll get into some spoilers for Hero Mode. 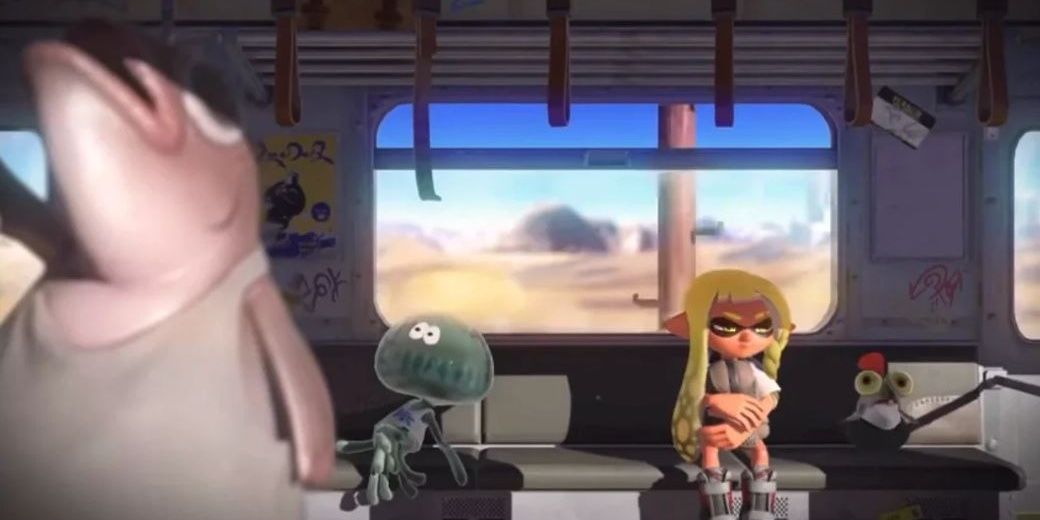 At the very beginning of Splatoon 3, right after you finish the tutorial, you board a train leading into Splatsville proper. This isn't that strange in itself; the Splatlands are a big, generally inhospitable place, so you need long-distance infrastructure. No, the strange thing is who is on that train with you.

On the other side of the cabin, holding onto a handrail, is a large, vaguely humanoid fish person. Now, Splatoon's world is absolutely lousy with anthropomorphized sea critters, but this is the first of this kind we've ever seen. Most creatures like this were confined to the Undersea Metro in Splatoon 2's Octo Expansion, but apparently, these strange fish folk can live where they please, and in the desert no less. 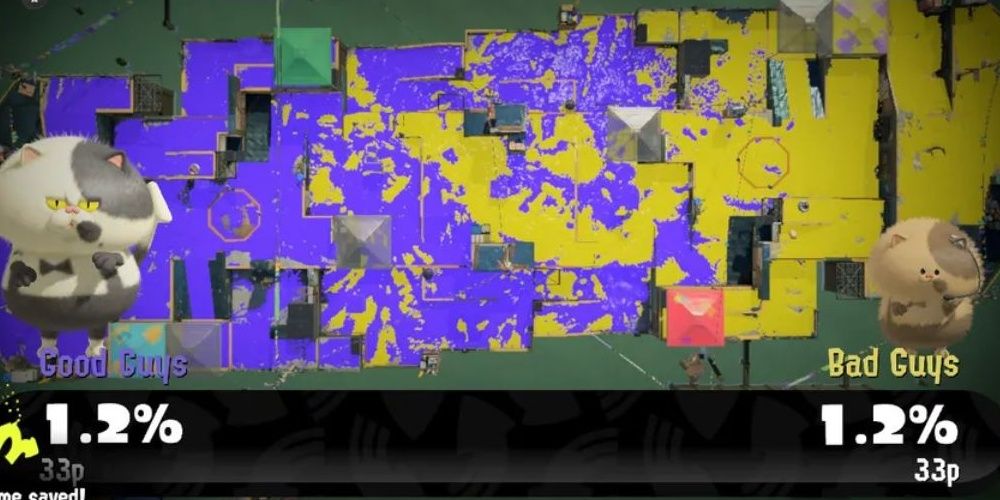 Whenever you finish a match in Splatoon 3, Judd and Li'l Judd appear to do their usual judging thing. Judd looks about the same as before, while Li'l Judd's fur has taken on a darker, more fuzzy texture. The two seem mostly unchanged, at least until after you finish Hero Mode.

After you complete Hero Mode, Li'l Judd is suddenly sporting a small yet distinctive headset microphone whenever he appears to judge a match. The game isn't clear on exactly what this microphone is for, but the predominant theory is that Li'l Judd may have taken over as the unseen voice behind GrizzCo in Mr. Grizz's absence. 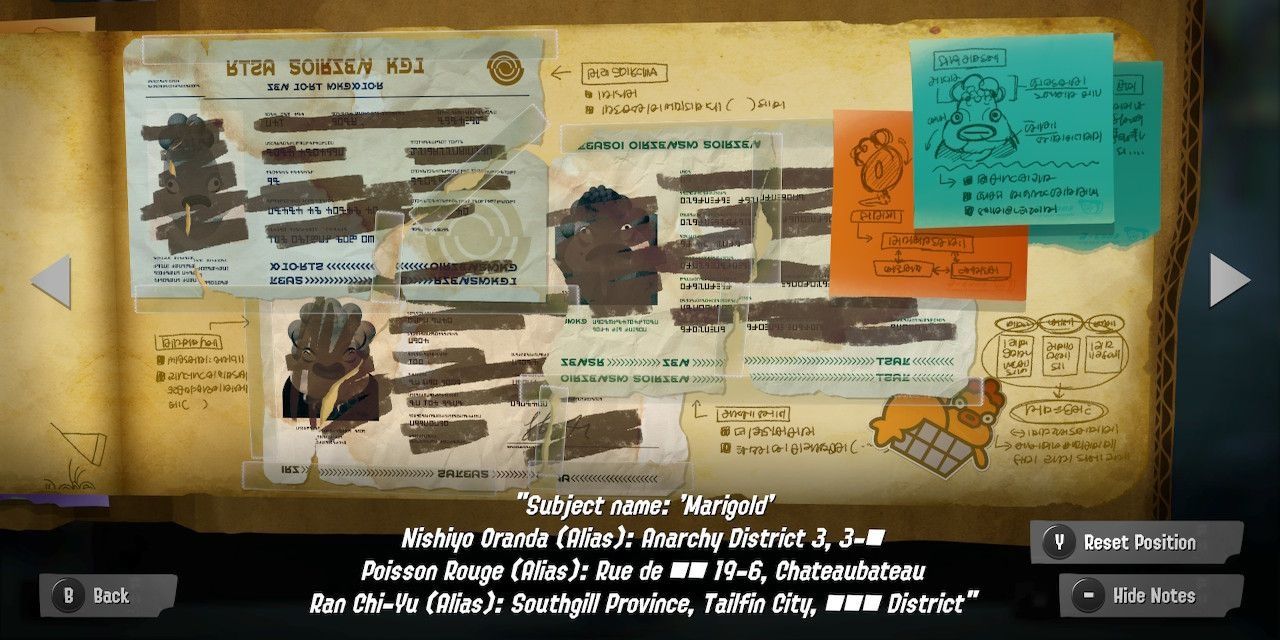 Throughout Splatsville, specifically at the Recon Station, Tableturf Battle Dojo, and Crab-n-Go stand, there are three individuals that look almost identical. Their text boxes don't offer up their names, only identifying the three as "Staff."

If you play Tableturf Battle and use the starter deck, you'll receive a card in their image identifying them as Marigold. But which one is Marigold? Well, according to one of the Sunken Scrolls, all three of them. "Marigold" is apparently an alias that all three of them share, though for what reason is unknown. 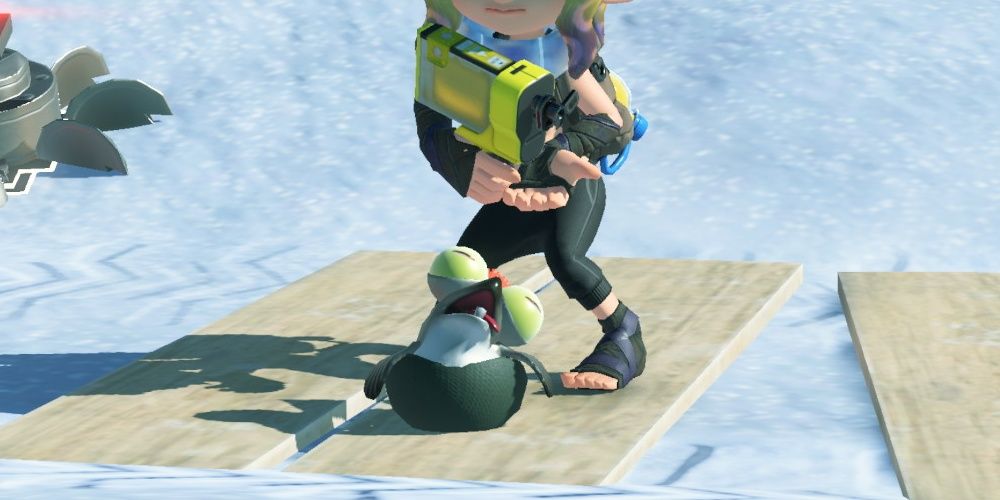 Occasionally, if you stand idle for a little while in the overworld areas of Alterna, your little buddy, Smallfry, may start singing. It's very soft, so you might not notice it if you're not paying attention, but he is gurgling out a little melody.

Interestingly, the melody in question is the infamous Calamari Inkantation, the Squid Sisters' mysterious song known for empowering heroes and undoing brainwashing. Seeing how the Inkantation was what got most Ocotlings to leave the Octarian army, it's possible Smallfry heard it at some point and left his school to join you.

5/9 The Owner Of The Matchmaking Lobby 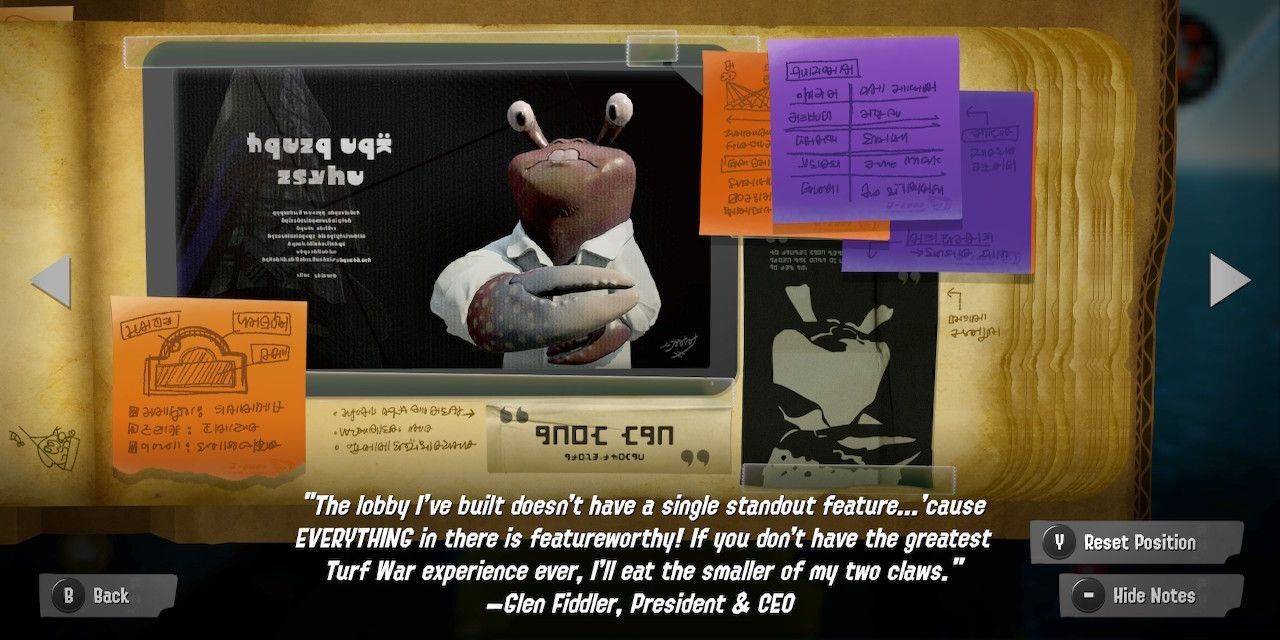 In the first two Splatoon games, the matchmaking lobby wasn't much more than a little neon-colored room where you waited to get into your match. Apparently, someone in this world was dissatisfied with that because, in Splatoon 3, it's a full-on rec center, complete with a practice range and lounge area.

According to the Sunken Scrolls, this overhaul is the work of one Glen Fiddler, President, and CEO of… whatever company made the Lobby. While we never meet Mr. Fiddler in the game proper, he claims in a brief interview that he has absolute confidence in the quality of his Lobby design. He's so confident, in fact, that he'll eat one of his claws if he gets a bad review. 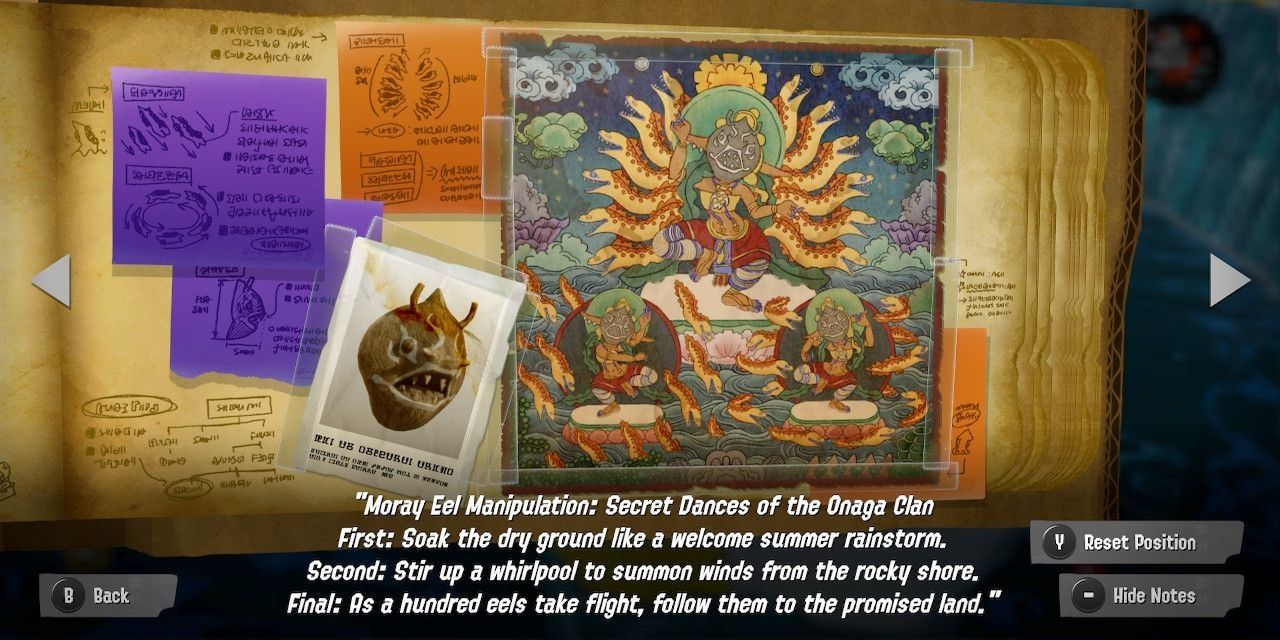 Exceptional Inklings and Ocotolings have been known to exhibit all kinds of incredible skills and abilities, from Agent 3's feats of super strength to Pearl's explosive voice. Deep Cut member Frye is another of these exceptional individuals, commanding a group of gigantic moray eels to battle you in Hero Mode.

According to the Sunken Scrolls, though, this isn't just a neat trick that Frye can do. Rather, this is apparently an ancient technique passed down through a lineage of Inklings known as the "Onaga Clan." By soaking the ground in ink and performing a special dance, these individuals could command the giant eels for the apparent purpose of "following them to the promised land." 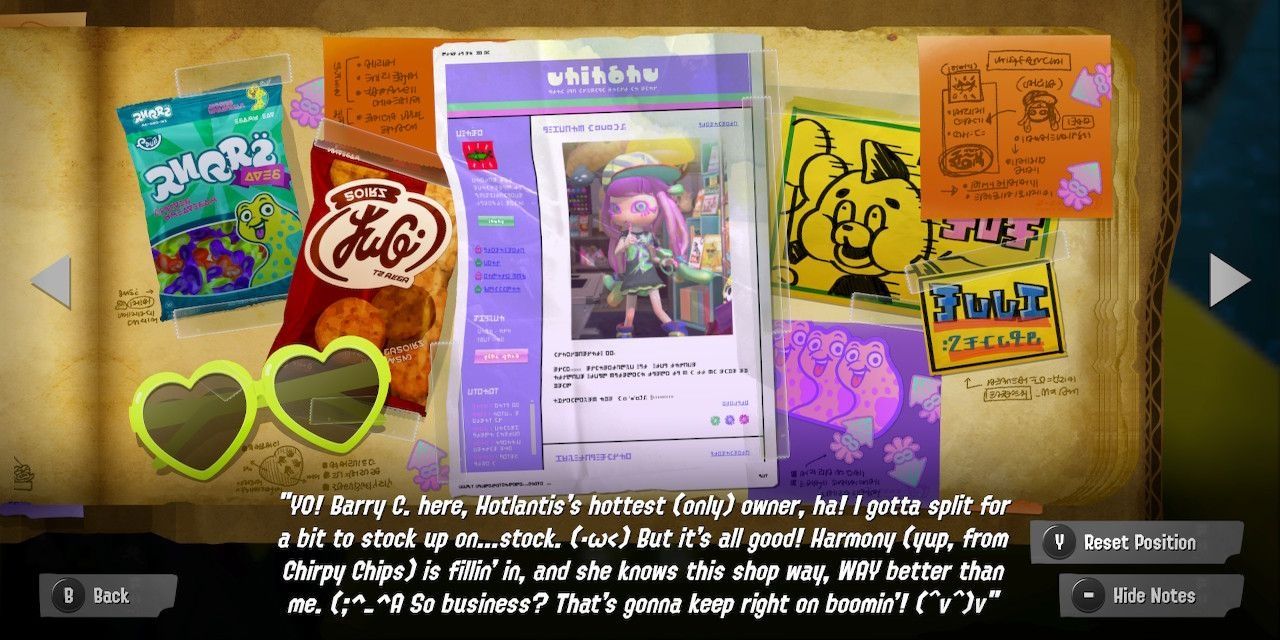 The first time you step into the general store Hotlantis, you're greeted by Harmony, lead singer of techno group Chirpy Chips. What's a famous singer doing working in a general store? Technically nothing, because she doesn't work there.

According to the Sunken Scrolls, Hotlantis is actually owned by an individual named "Barry C.," which, if we were to make an educated guess, is probably short for something like "Barry Cuda." Anyway, Barry leaves the store on a regular basis to regularly secure more random merchandise, leaving Harmony to care of it in his absence.

2/9 The Captain Actually Gets Paid 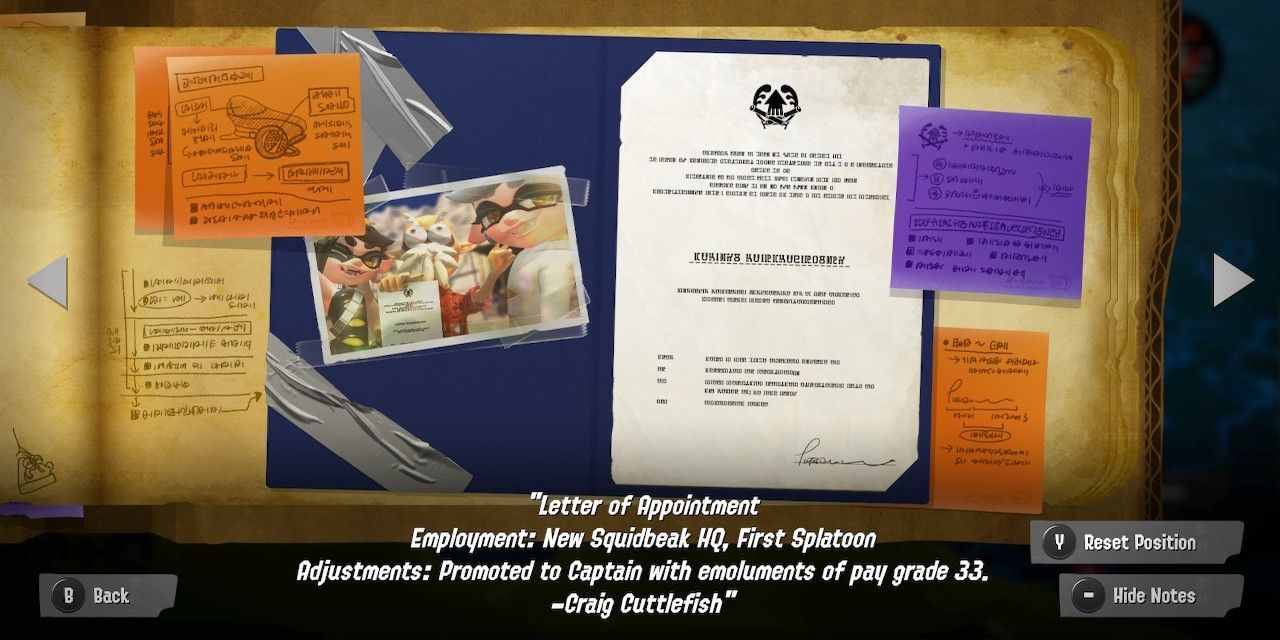 Never, in the history of individuals working for the New Squidbeak Splatoon, have any of them gotten paid. Or, at least, none of the individuals we've played as. Apparently, though, that's just a part of the organization's employment structure. Rookie Agents don't get paid squat, but go above that, and suddenly there's a paycheck in it for you.

According to the Sunken Scrolls, when the former Agent 3 was promoted to Captain of the Splatoon, they also received a pay bump up to salary "grade 33," whatever that means. It makes you wonder if Agent 4 and the new Agent 3 are the only ones who aren't getting any kind of remuneration for their hard work.

1/9 The Reefslider Ends In An Akira Slide 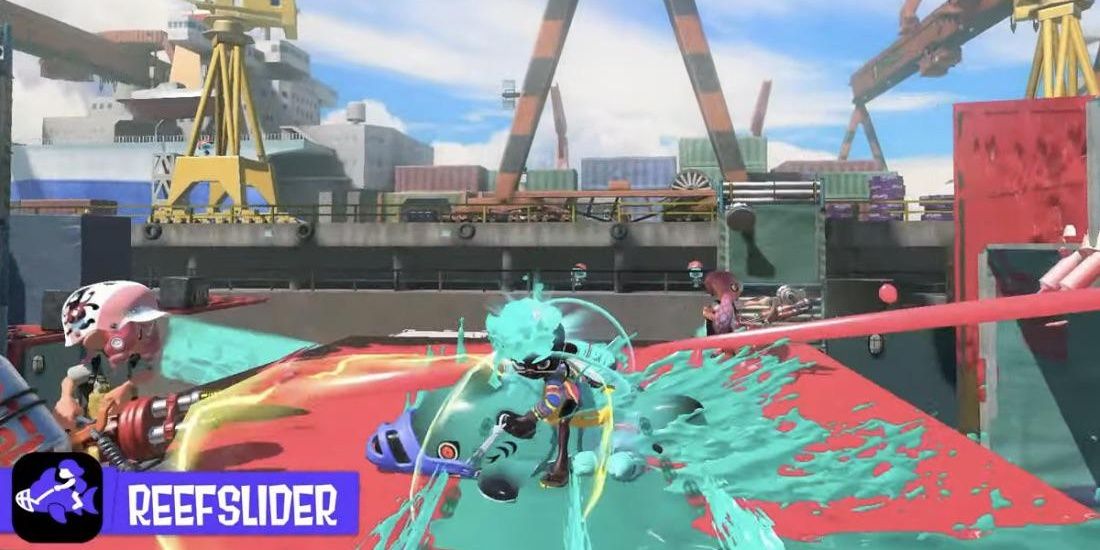 All of the Special Weapons used in Splatoon 3 are pretty flashy in their own right, from the high-flying Inkjet to the tentacle-stretching Zipcaster. The new Reefslider is another addition to this flashy catalog, dashing forward before exploding in a Splashdown-esque burst of ink.

Eagle-eyed anime fans may have noticed, however, that at the tail-end of the Reefslider's brief journey, the rider curves it harshly into a horizontal slide. Yep, it's the infamous "Akira Slide," named after the classic 1988 anime film.