Alice: Madness Returns continues American Mcgee's twisted take on Alice In Wonderland, started in the PC adventure game launched in 2000. In the first game, Alice journeyed through Wonderland and confronted the trauma of the fire that killed her family. Then, after defeating the Red Queen and escaping a catatonic state, Alice got released from Rutledge Asylum, where she was getting treated.

Unfortunately, Alice Lidell's troubles are far from resolved. This new tale reveals that Alice has moved to an orphanage for troubled children. The resident clinician, Dr. Bumby, pushes her to forget all that happened in Wonderland and her childhood traumas. However, a triggering event catapults Alice back, where even more dark evils await. Do you have what it takes to guide Alice through these terrors? Use these tips to help you along the way!

One of Alice's first items you'll come across is a shining toy castle. Interacting with this item recovers a memory of Alice's family. However, these memories take on different forms. Each shape represents a different person or institution from Alice Lidell's life.

Here's a breakdown of what each memory item represents.

While some memories are easy to find, other memories hide in the dark corners of Wonderland. You'll have to use all of your resources and pay close attention to uncover them all.

If you ever wish to revisit specific memories or see which ones you are missing, you can review them all in the Memories section of the Main Menu.

Collect As Much Teeth As You Can To Upgrade Weapons Fast 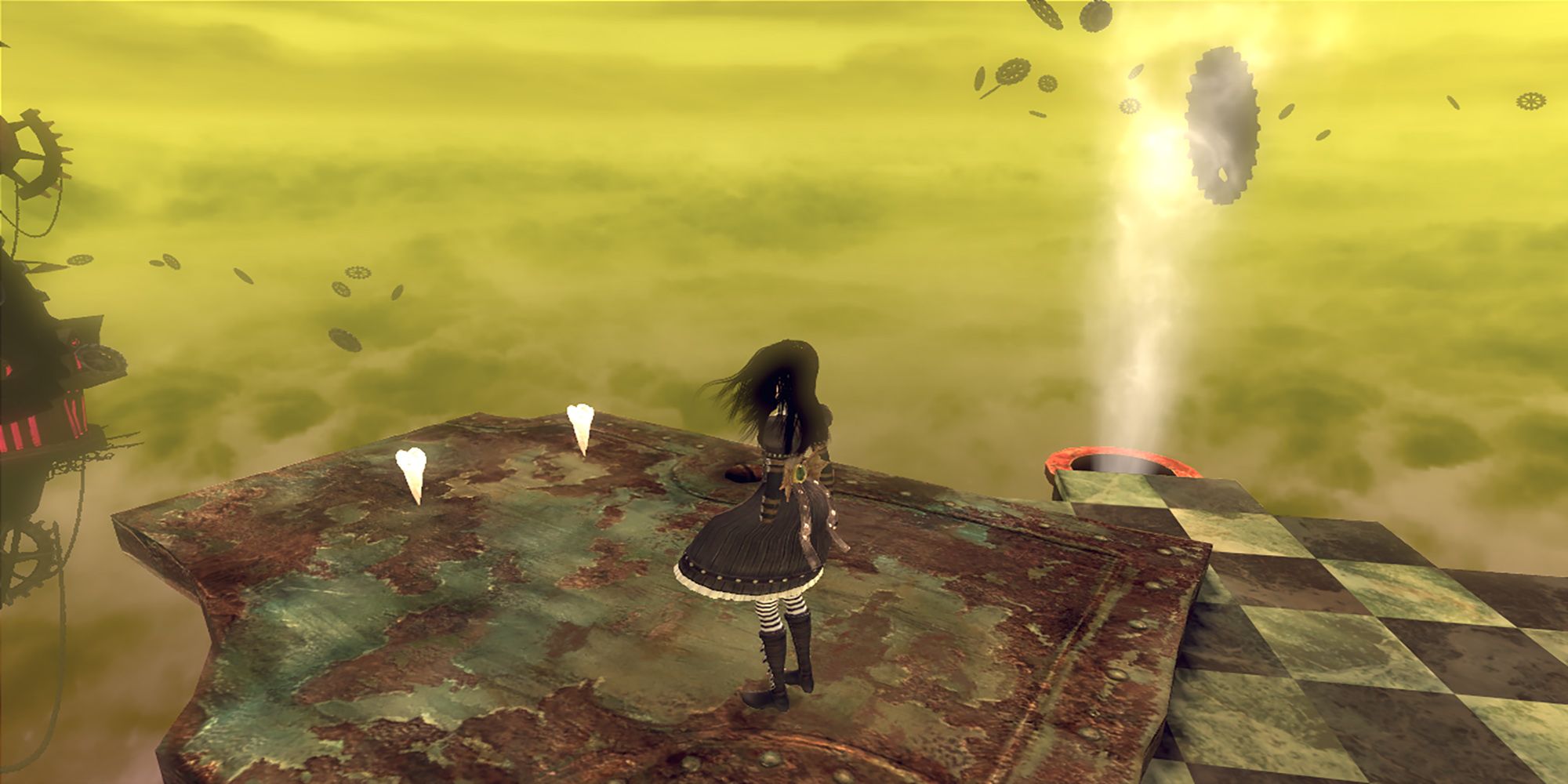 You'll come across random teeth in Wonderland when you begin Alice's story. While you won't understand their significance initially, Hollow Yves (the skull-bow on Alice's dress) will inform you of how they work once you gather enough.

Hollow Yves's instruction will reveal that your pearly whites can get exchanged for weapon upgrades. And believe us, you're going to need weapon upgrades! Enemies become increasingly dangerous in Wonderland, and you'll stand a better chance against them with more powerful weapons.

So, where can you find teeth? There are plenty of places to discover them. Some teeth lie out in the open. Meanwhile, some teeth hide inside breakable objects like boxes, shells, and vases. You can also gain teeth from defeating enemies. Lastly, you can find teeth via hidden pathways revealed by shrink sense or peppered snouts.

Keep An Ear Out, And Pepper Those Snouts 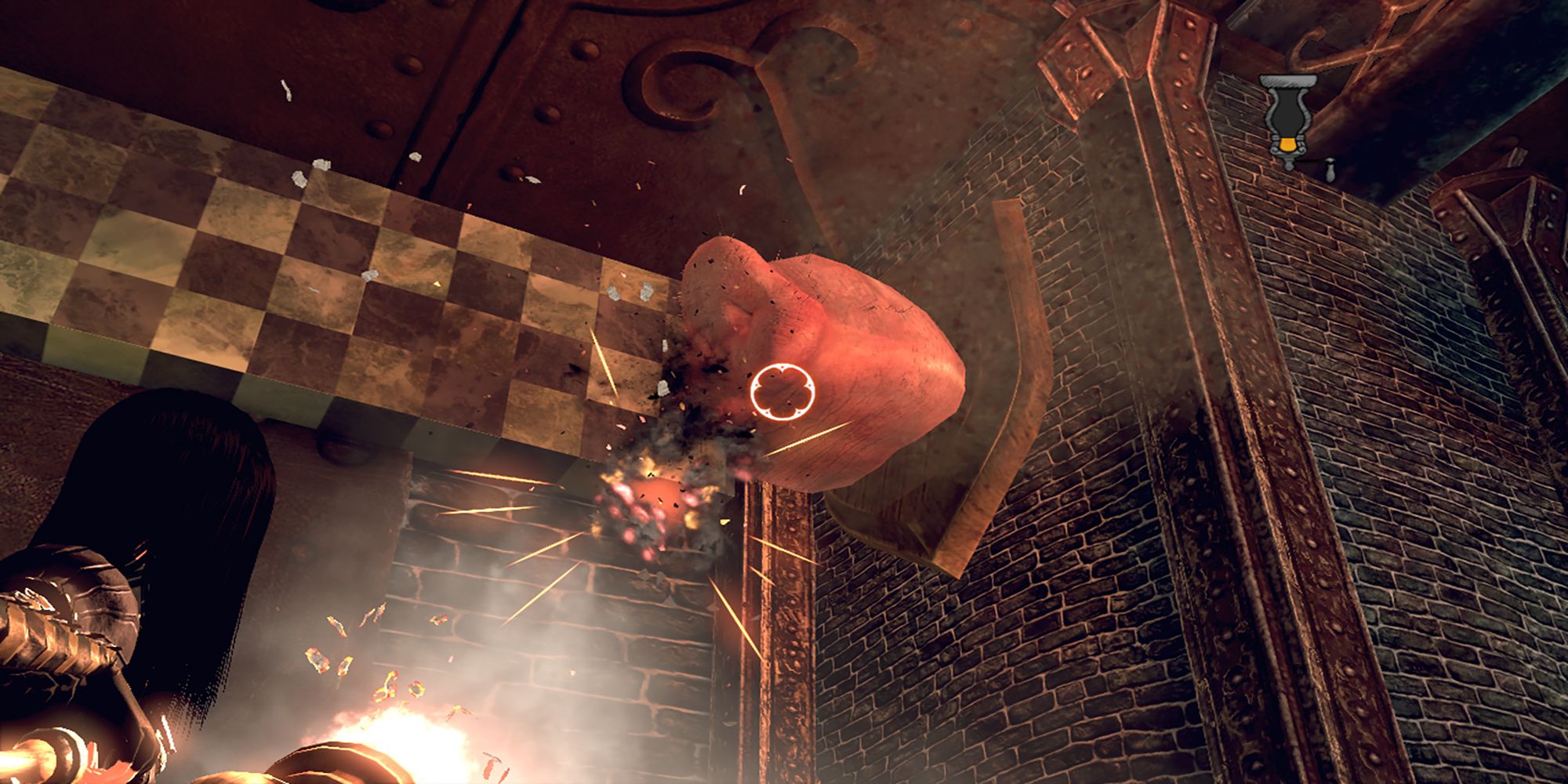 Peppered snouts reveal bountiful rewards and hidden secrets in Wonderland. You'll encounter your first when you run into the Duchess and receive the pepper grinder weapon. Upon receiving the grinder, she'll inform you that she wishes to pepper pig snouts to add to her cooking. (This is a welcome change from the first Alice game when she would rather eat you.)

Peppering snouts are straightforward. You'll know one is nearby when you hear a pig snorting in the area. Sometimes snouts fly in the air. Other times, they are on mounts bolted to walls and platforms.

Once you find a snout, take out your pepper grinder and shoot the pig snout until it sneezes. You cannot lock on to snouts as you would your enemies, so you'll have to keep your aim steady.

After the snout sneezes from the pepper, it will reveal a new pathway that leads to rewards. Sometimes these rewards include new memories, teeth, and roses to replenish your health. Furthermore, peppering snouts rewards baskets from the Duchess that give you additional helpful goodies!

Peppered snouts are always worth the hunt. Still, they sometimes come with unintended consequences. For instance, one of the first snouts you pepper will reveal a swarm of enemies. Therefore, it's vital to stay alert and ready to rumble whenever you pepper a snout, just in case.

Slash Open Objects For Rewards (But Prepare For Enemies) 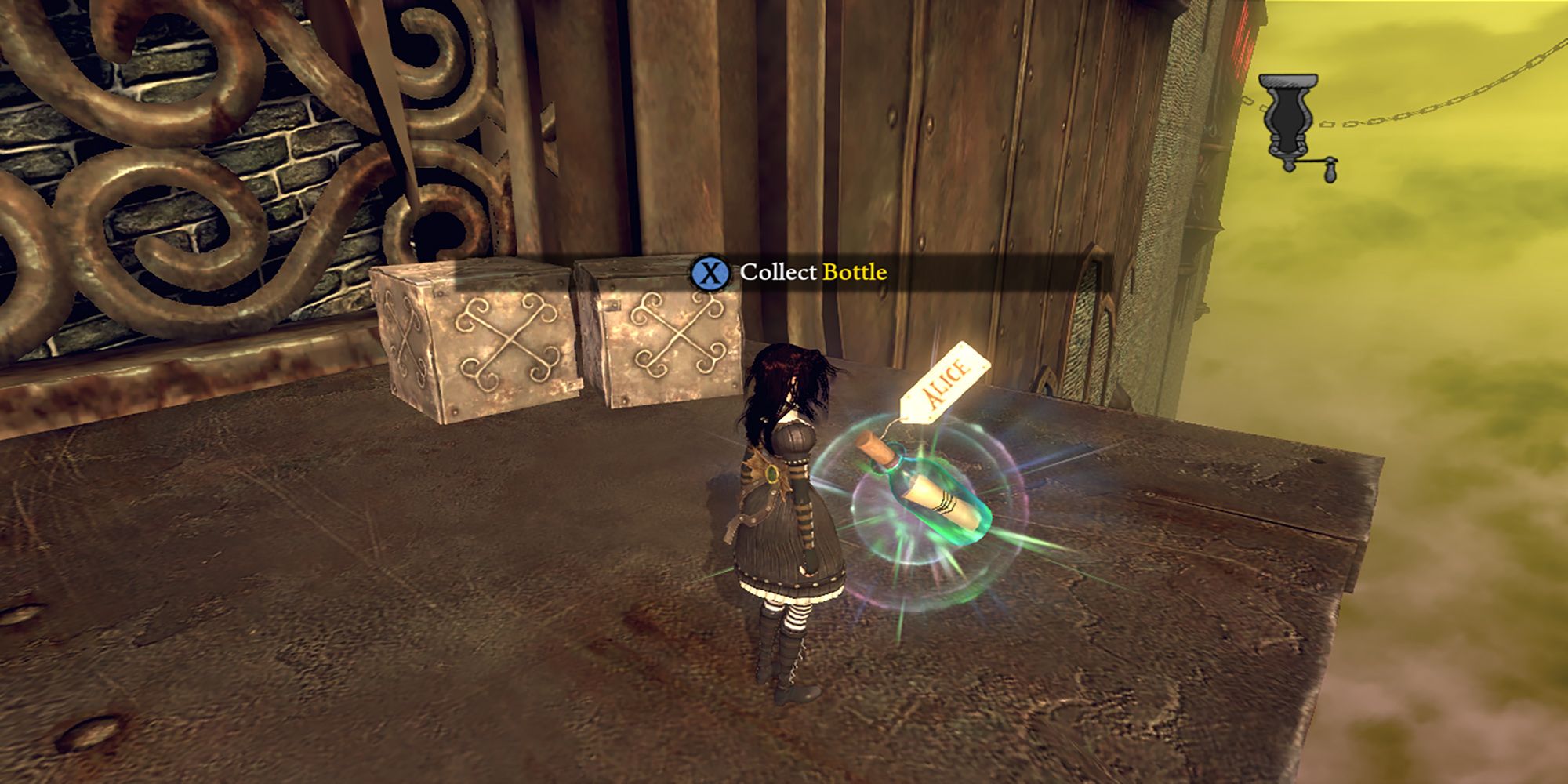 However, we recommend slashing more than once when breaking an object. That's because sometimes breakable objects contain enemies, such as Slithering Ruin. Neglecting this possibility can open you to unnecessary, preventable damage. 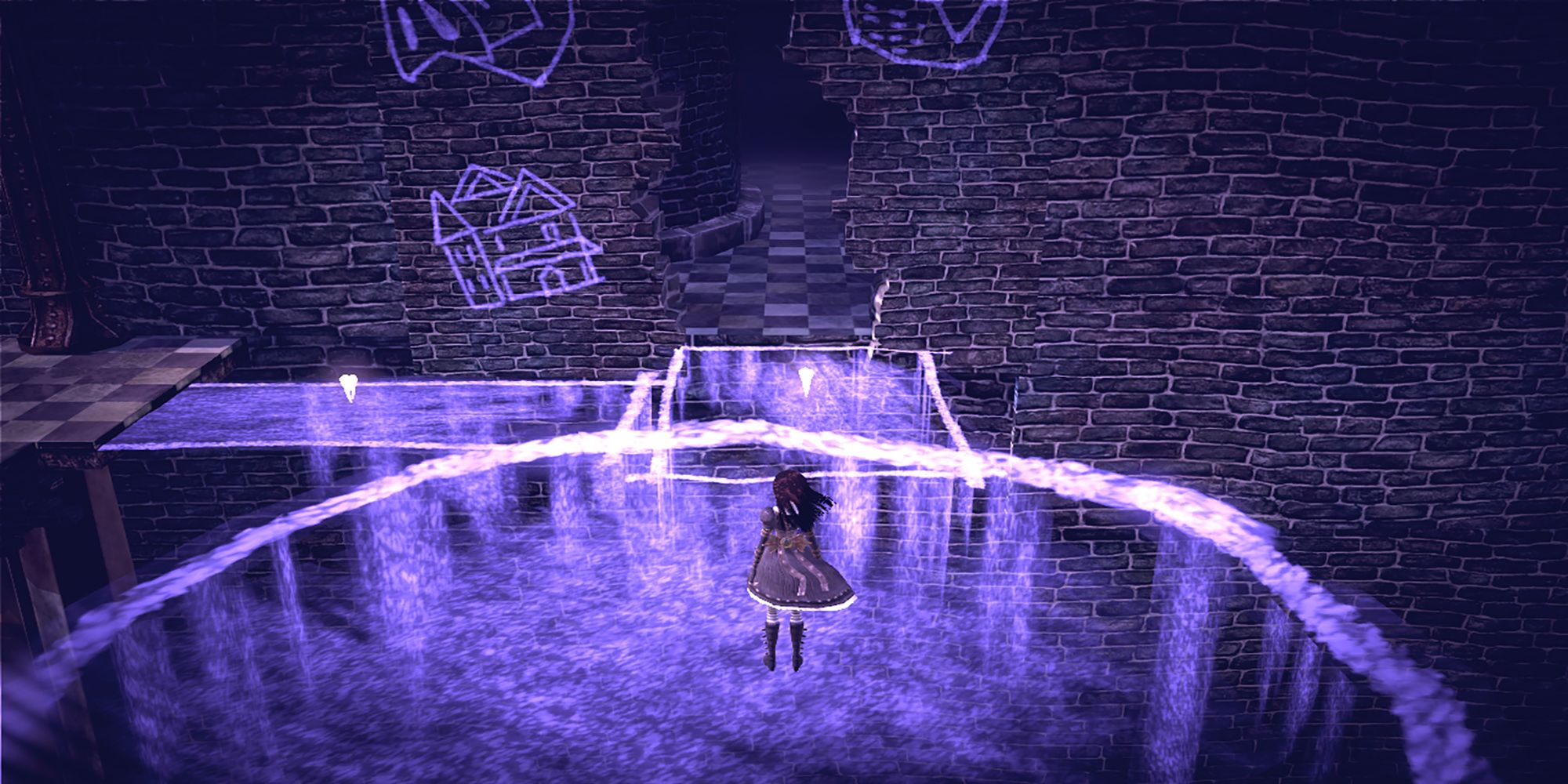 If you're familiar with Alice In Wonderland lore, you know how the "Drink Me" potion works. Eating a cake marked "Eat Me" makes one grow into a giant in the original story. In turn, drinking the potion makes one shrink.

In one of the first scenes in Alice: Return To Madness, Alice douses herself in the shrinking potion. This bath allows her to shrink down in size on command. Alice can travel through keyholes that lead to hidden valuables in her shrunken state. These valuables include memories, teeth, bottles, and roses.

However, another significant advantage of shrinking is a unique sixth sense. This skill called Shrink Sense reveals hidden messages and passageways to Alice.

Shrink Sense is immensely helpful when you get stuck. In some cases, the skill is even necessary. For example, Shrink Sense illuminates platforms and bridges vital to progressing through a level. Furthermore, even when it's unnecessary, passageways revealed by Shrink Sense can help you find more valuables and even hidden pig snouts.

What's more, Shrink Sense can provide clues about upcoming enemies and help you get back on track when you get lost. Therefore, we recommend engaging in Shrink Sense whenever you are in a pickle. 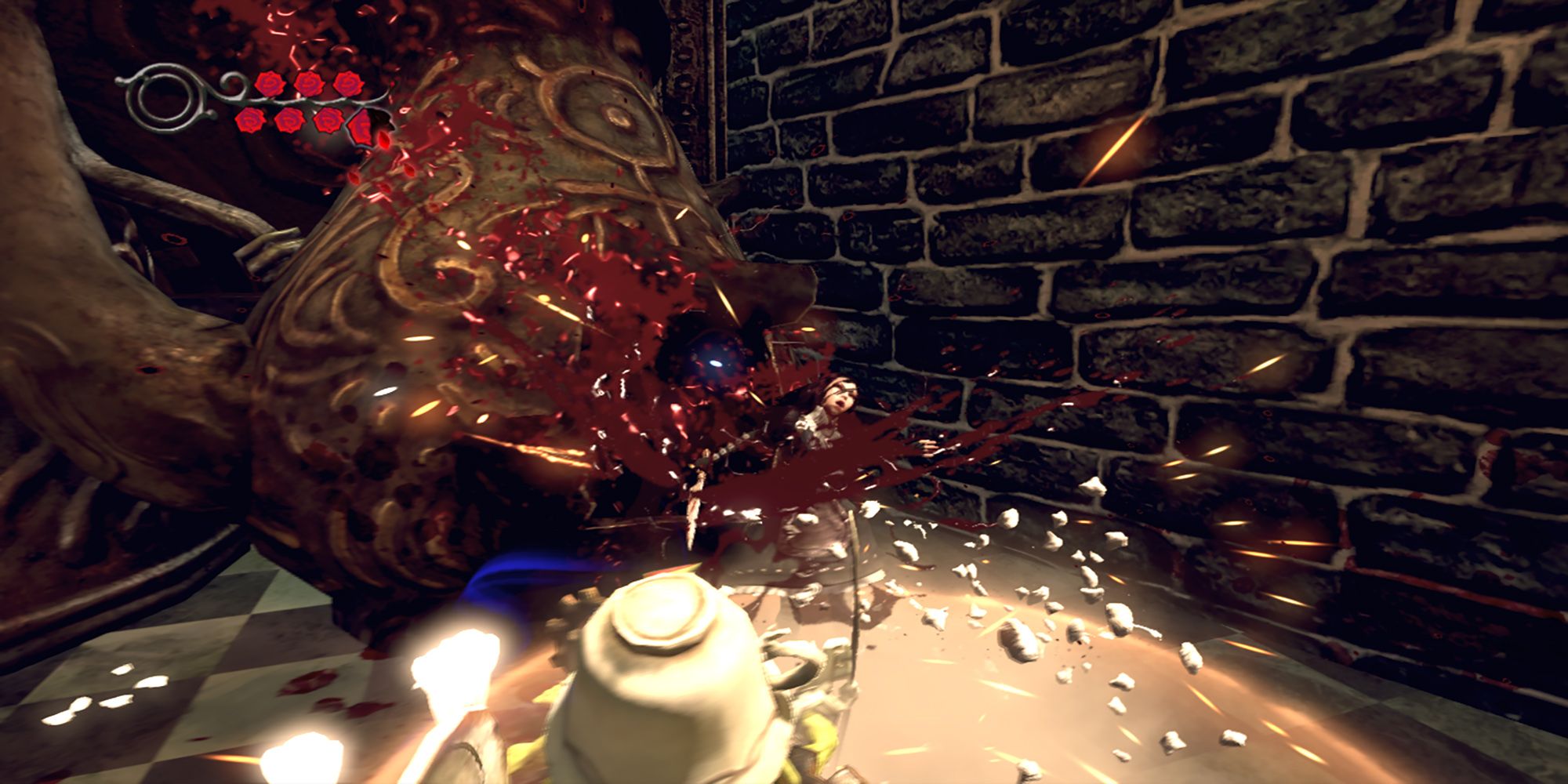 Combat difficulty escalates relatively quickly in Alice: Madness Returns. Furthermore, avoiding damage can become challenging with a character whose only defense is a dodge. Luckily, you'll receive various weapons with different ranges and abilities throughout the campaign. In turn, it's vital to make use of them.

For example, the first weapon you'll equip is the Vorpal Blade, a melee-combat knife. It's an easy weapon and comfortable for those who enjoy close-up fighting. However, this weapon is more effective against some enemies than others. Plus, the enemies you'll face in Alice are often quick and can deplete your health if you are not careful. So, what are your other options?

Enter the pepper grinder. This weapon, bestowed to you by the Duchess, is a long-range weapon similar to a Gatling gun. You can either command the grinder manually or lock it onto opponents as you would the vorpal blade. However, the pepper grinder's only setback is that it overheats quickly, requiring a short cool-down time between fire rounds.

As you can see, both weapons have their drawbacks when used alone. However, if you vary your combat with close-up vorpal blade attacks and ranged pepper grinder attacks, you can make up for each weapon's flaws.

Consider this strategy, for example. First, try shooting enemies with the pepper grinder from far away to ensure a safe approach. Then, slash them with the vorpal blade for some heavy damage. Then, if the enemy gets too aggressive, you can retreat and use the pepper grinder again for cover.