Dungeons are one of my favorite activities in World of Warcraft, and the new Dragonflight expansion has some great ones. Topping the list is The Nokhud Offensive, which incorporates the new dragonriding mechanic to turn the Ohn’ahran Plains zone into one giant battlefield, and The Azure Vault, which has one of the expansion most heart-wrenching storylines.

Dragonflight’s dungeons offer a great variety of mechanics that have been a lot of fun to learn, and every Mythic+ key I’ve upgraded has been an exciting challenge to overcome. All except one, that is. Fuck Ruby Life Pools, all my homies hate Ruby Life Pools.

I’ll be as fair as I possibly can. Ruby Life Pools has gorgeous environments and an excellent flow. Fighting your way through the Infusion Chambers beneath before hitching a ride on a blue dragon as it spirals all the way up to the exposed pools where the primalists are burning the hatcheries is high stakes, cinematic, and memorable. It also avoids a mistake that a lot of dungeons make by giving you a convenient checkpoint so you never have to run very far after a wipe. The first boss, Melidrussa Chillworn, has a balanced suite of mechanics that keeps everyone on their toes without becoming too overwhelming. Those are the only nice things I can say about Ruby Life Pools. Now on to the complaining.

For such a small dungeon, it’s a massive slog. There are only two chambers before Melidrusa and one big ring to circumnavigate before the last two, but it still manages to take just as long as many bigger dungeons like Halls of Infusion and Algeth’ar Academy. The trash packs are dense and particularly annoying, especially when you get to the four Blazebound Destroyers that explode in a massive, insta-kill AoE on death.

The dragon mini-bosses, Thunderhead and Flamegullet, will ambush you out of nowhere and quickly wipe your team if you’re not ready to dodge their flame breath, which in the case of Thunderhead, is wider than you think and very hard to see. All the while, Primalist Cinderwavers are hiding in the bushes casting Cinderbolts on random targets, and the Flamedancers are doing their uninterruptible Flame Dance, which can also one-shot you. It takes half the dungeon’s allotted time just to clear out the upper ring, and it’s annoying the entire time. 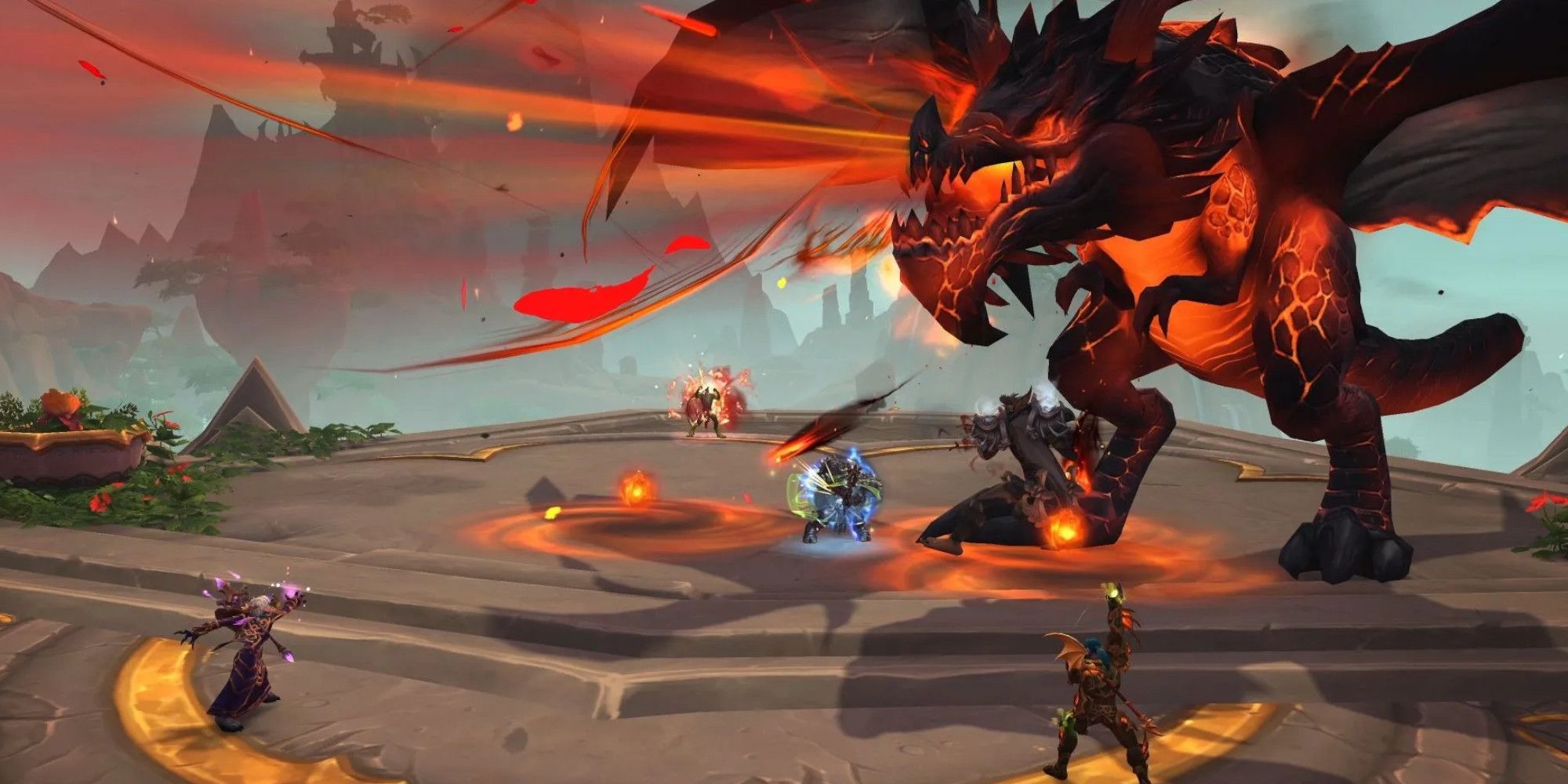 Then you get to the second boss, Kokia Blazehoof, who turns the floor into lava and rolls giant molten meatballs at you. If you’re not careful, the entire battlefield can quickly turn into one big inespecapable lava pit. With a coordinated group and at least one ranged attacker, Kokia isn’t too bad. The ranged player just needs to stand on the edges and wait for the Blazebinding, then everyone needs to turn and kill the Blazebound Firestorm, while interrupting its Roaring Blaze and watching out for Moteln Boulders.

You usually only have to repeat this once or twice, and if you managed to drop the lava pools at a good distance, you can safely avoid the damage and take down Kokia quickly. If you’re just running in a PUG or you’re missing a ranged attacker, on the other hand, then may God have mercy on your soul. This boss is practically designed to punish uncoordinated teams, and if I was just joining random groups to upgrade my keys, I’d ignore Ruby Life Pools 100 percent of the time just because of this boss.

Finally, there’s Kyrakka and Erkhart, which is everything you hate about Kokia, but now the lava pools spawn on everyone, and they move around randomly. Forget coordination, you need a team of mind readers to deal with all of the crap these two send at you. Just dropping the lava pools out of the way is hard enough, but then Erkhart starts blowing them all around the arena with gusts of wind, cutting you off from your teammates and, most importantly, your healer.

Making things even more frustrating is the fact that classes with leap still take damage from the lava pools even when they jump over them. Every time I’ve defeated this boss has felt like pure luck, and I’ve only done it with friends in Discord. I don’t envy anyone trying to PUG this boss, and I’ll probably never try it myself.

Ruby Life Pools is a leveling dungeon, the first one you unlock at level 61, and the dungeon with the fewest bosses in the expansion. There’s an expectation that it will be a shorter, simpler dungeon with fewer mechanics to ease people in, but it’s one of the most punishing dungeons of them all. Thank god Mythic+ keys don’t roll over every week, because I’d probably get stuck with the +5 key I’m holding right now for the rest of the expansion. I’ll stick to a floor that isn’t made of lava, thank you very much.