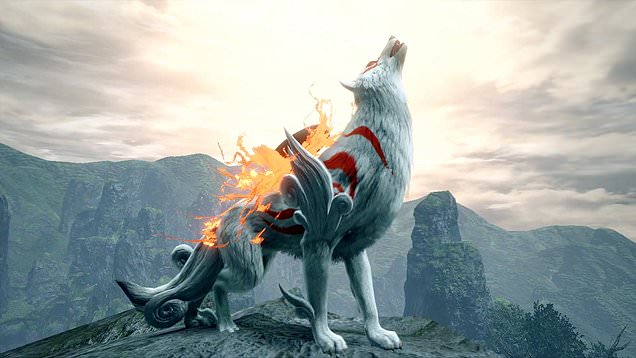 Okami’s goddess wolf protagonist is coming to Monster Hunter Rise very soon, which is the closest fans will get to a new game for now.

Ever since Monster Hunter Rise revealed its palamute dog companions, fans of Capcom classic Okami wanted, nay, expected some kind of cameo from that game’s own wolf protagonist Amaterasu.

Earlier today, Capcom announced that Okami will be the focus of Rise’s second in-house collaboration, following its first crossover with Monster Hunter Stories 2: Wings Of Ruin.

The trailer is guaranteed to elicit nostalgia from fans. Ammy looks surprisingly well (and as adorable as ever) as a somewhat realistic animal. And not only does she still leave trails of flowers and leaves in her wake as she runs, but her companion Issun is coming along for the ride.

And when fighting monsters, you can see her wield a couple of the different weapons she used in Okami, like her reflector and her glaive. And it looks as if unlocking her also nets your hunter a weapon made to resemble a paintbrush, referencing Ammy’s own Celestial Paintbrush and Issun’s job as an artist.

The palamute costume arrives on July 30 and is described as an event quest reward, so you’ll want to make sure you complete said quests as soon as you can.

While it’s nice to see that Capcom hasn’t forgotten about Okami, fans are no doubt still praying for an actual sequel. Aside from the original game (which has seen multiple re-releases and is easily available on modern platforms), there was only ever one other Okami game.

Okamiden released for the Nintendo DS in 2011 and instead focused on Ammy’s son, Chibiterasu. Described as more of a spiritual successor than a sequel, it performed well critically, but Capcom has yet to make any sort of follow-up since.

In 2016, PlatinumGames’ Hideki Kamiya, who directed Okami while he was at Capcom, said that he had ideas for a sequel and even appeared to strongly hint that it was happening.

Then in 2019, Kamiya and Ikumi Nakamura, who also worked on Okami as an artist and once served at PlatinumGames, outright said in a Twitter video that Okami was coming back.

There has been zero follow-up on this since and, even at the time, it wasn’t clear if Kamiya was being serious or if he was trolling his fans again. Considering it’s still a Capcom property, Kamiya making a sequel isn’t as easy as some might like it to be, but hopefully his teases will bare some fruit in the future.

Monster Hunter Rise is available for Nintendo Switch. A PC version is scheduled for early 2022.