Marvel's Midnight Suns is a sprawling tactical RPG that combines deeply strategic card-based battles with a unique life-sim experience. You'll spend just as much time vanquishing foes and saving the world as you will socializing and getting to know your favorite Marvel heroes.

The 60+ hour campaign is filled with a massive variety of tasks to complete and goals to focus on, and it can all be a bit overwhelming early on. If you'd like to make sure you start off on the right foot and put your focus in the right places, this list of tips and advice will help you do just that. 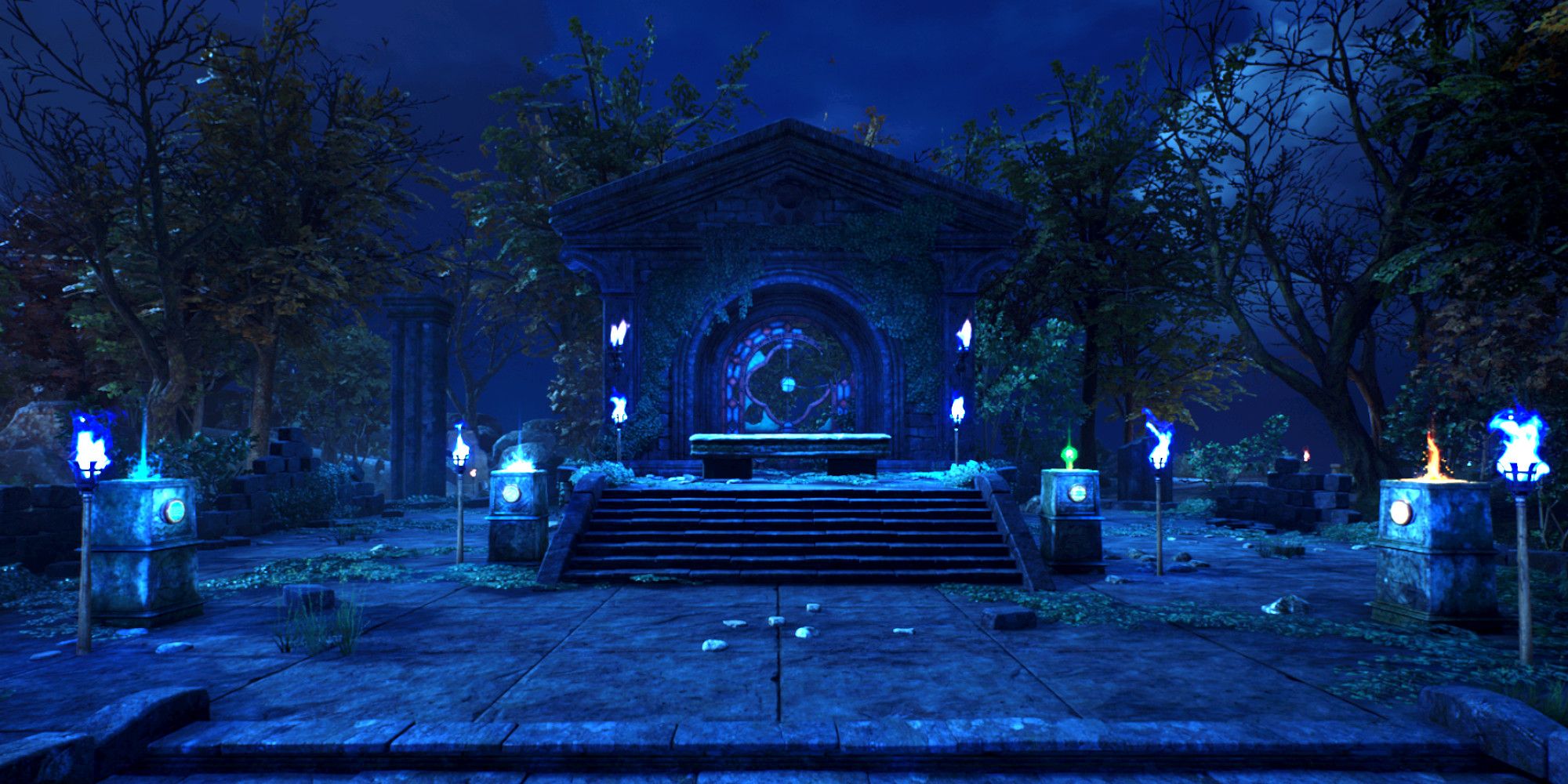 When the tutorial ends, Midnight Suns makes it clear that exploring the grounds outside the Abbey is completely optional and that you're free to venture out at your own pace. While this is true – you can complete the entire campaign without ever stepping foot outside the Abbey – you'll be missing out on a number of significant upgrades and benefits if you don't take the time to scope out the area.

Before every Emo Kids meeting, Magik will give you a shopping list of local herbs to collect. Doing so will increase the quality of the cards you receive after the club meeting, so it's a good idea to track these materials down beforehand.

Exploring the grounds will also give you access to Agatha's Cauldron, which you can use to turn reagents into gifts, tonics, and additional essence for crafting and upgrading your abilities. There are also two Hunter armor sets that can only be unlocked by completing outdoor challenges, and both of them have useful passive abilities that are worth pursuing. 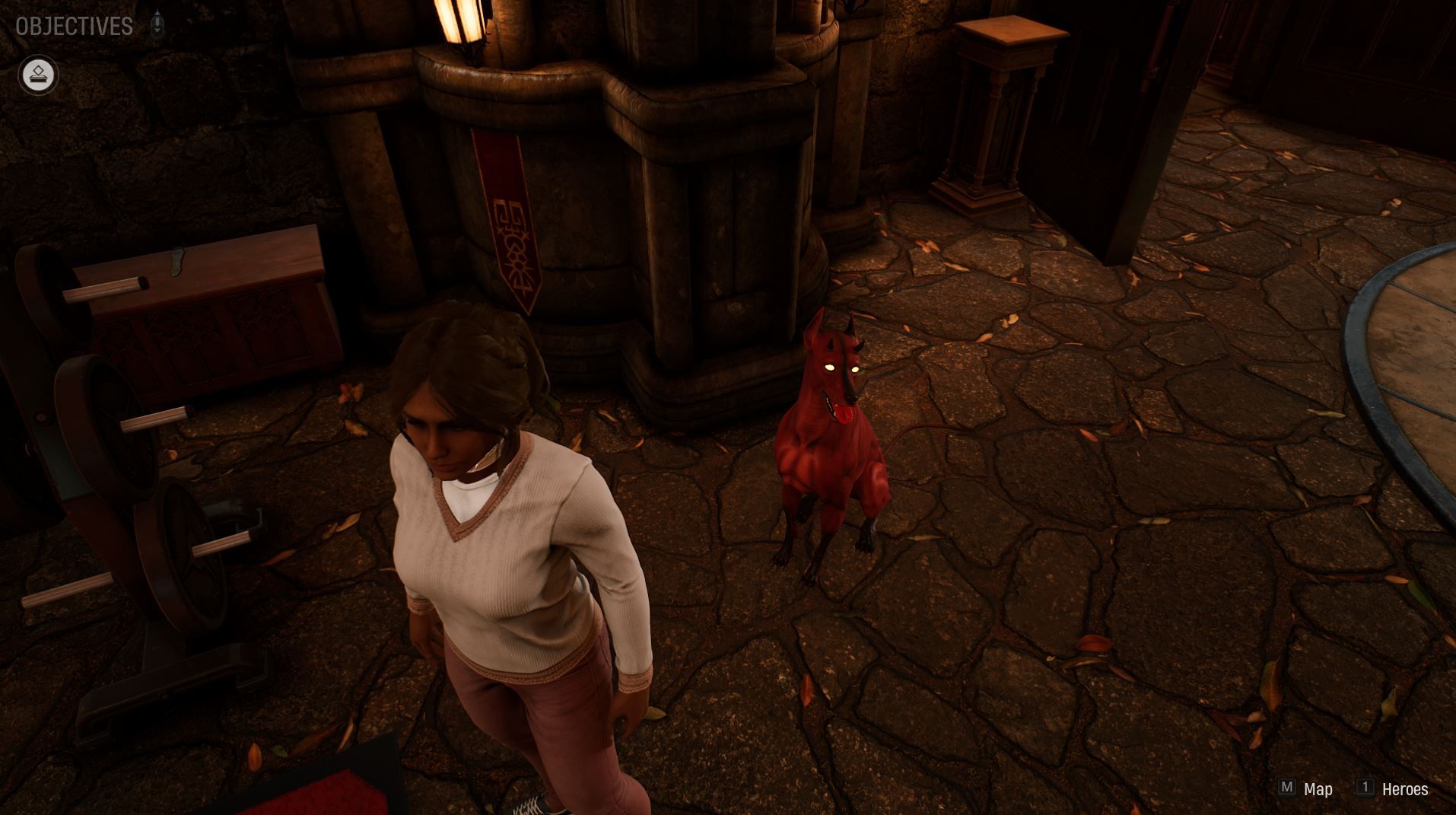 One of the tutorials will tell you how important it is to pet Charlie every day, but it's easy to forget this chore among all the other daily tasks you need to manage. Charlie doesn't level up like the other heroes, and you can't upgrade Charlie's abilities using essence either. The only way to make Charlie stronger is to give her lots of pets.

You won't be able to summon Charlie in battle until you've sufficiently increased your alignment meter, so you may not feel too concerned about leveling her up at first. At four heroic cost, Charlie is one of the most expensive cards to play, and, if she isn't properly leveled, it may not feel worth it. But Charlie can be a lifesaver in tough battles too. Not only is she another body on the board that can tank damage for your team, but her abilities can be incredibly strong, provided you've leveled her up enough.

You're Meant To Adjust Your Difficulty Setting For Each Situation 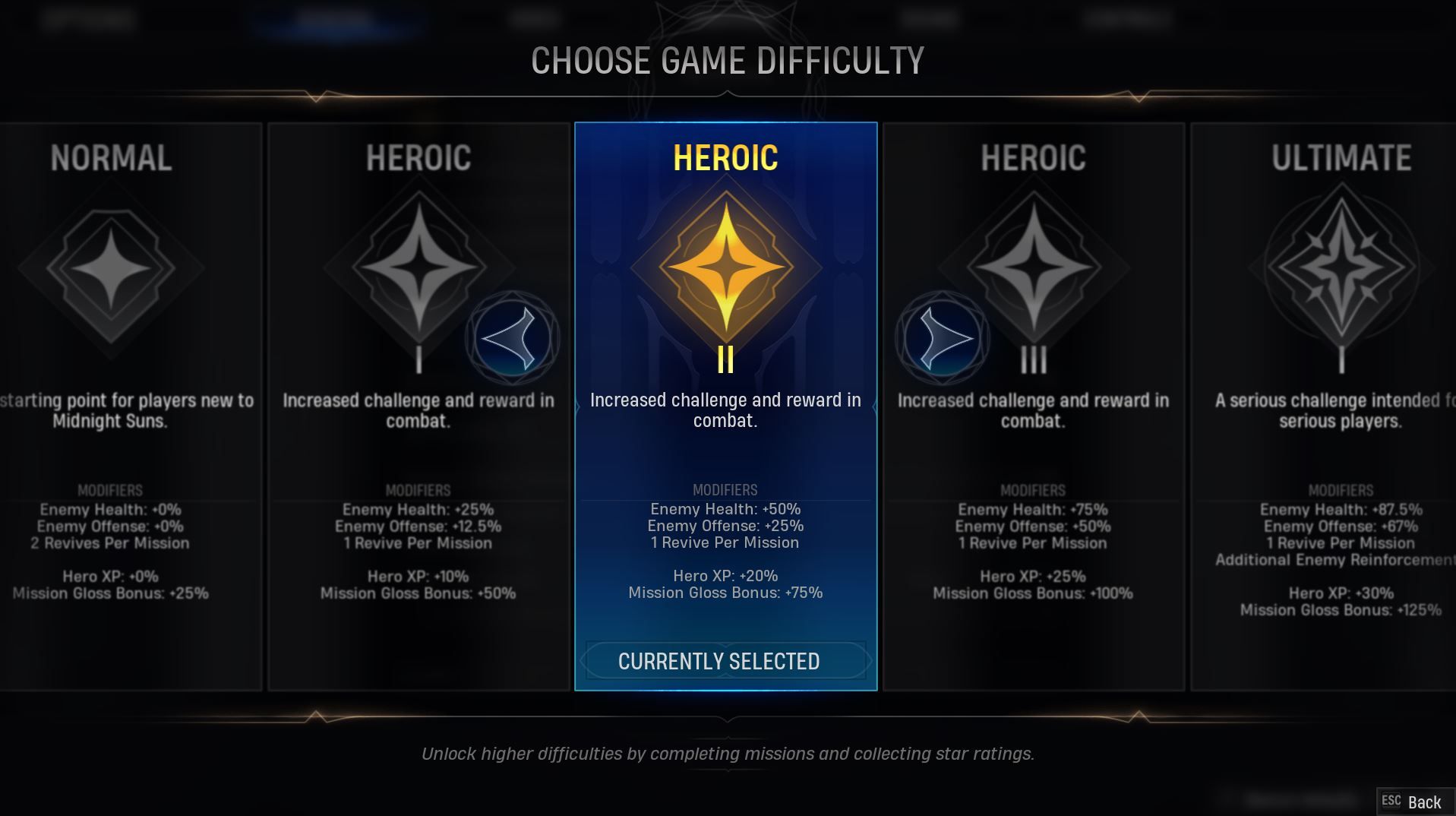 Increasing your difficulty will make enemies stronger, but it will also provide you with additional experience and Gloss, the currency for buying cosmetics. It is wise to increase the difficulty as your team gets stronger, but it is also sometimes necessary to drop it back down when the situation calls for it.

Every mission requires you to use at least one specific hero, and if that isn't a hero you've spent a lot of time training, you may find yourself stuck in an unwinnable situation. Each mission also has its own individual difficulty rating – easy, medium, or hard – and your strongest players might not be fit for every situation.

It's important to adjust your difficulty up and down when you need to. You'll lose a small percentage of experience and Gloss for that one encounter, but it's better than hitting your head against the wall in a mission you're not strong enough to beat.

Pick Three Heroes To Be Your Besties, But Train Everyone 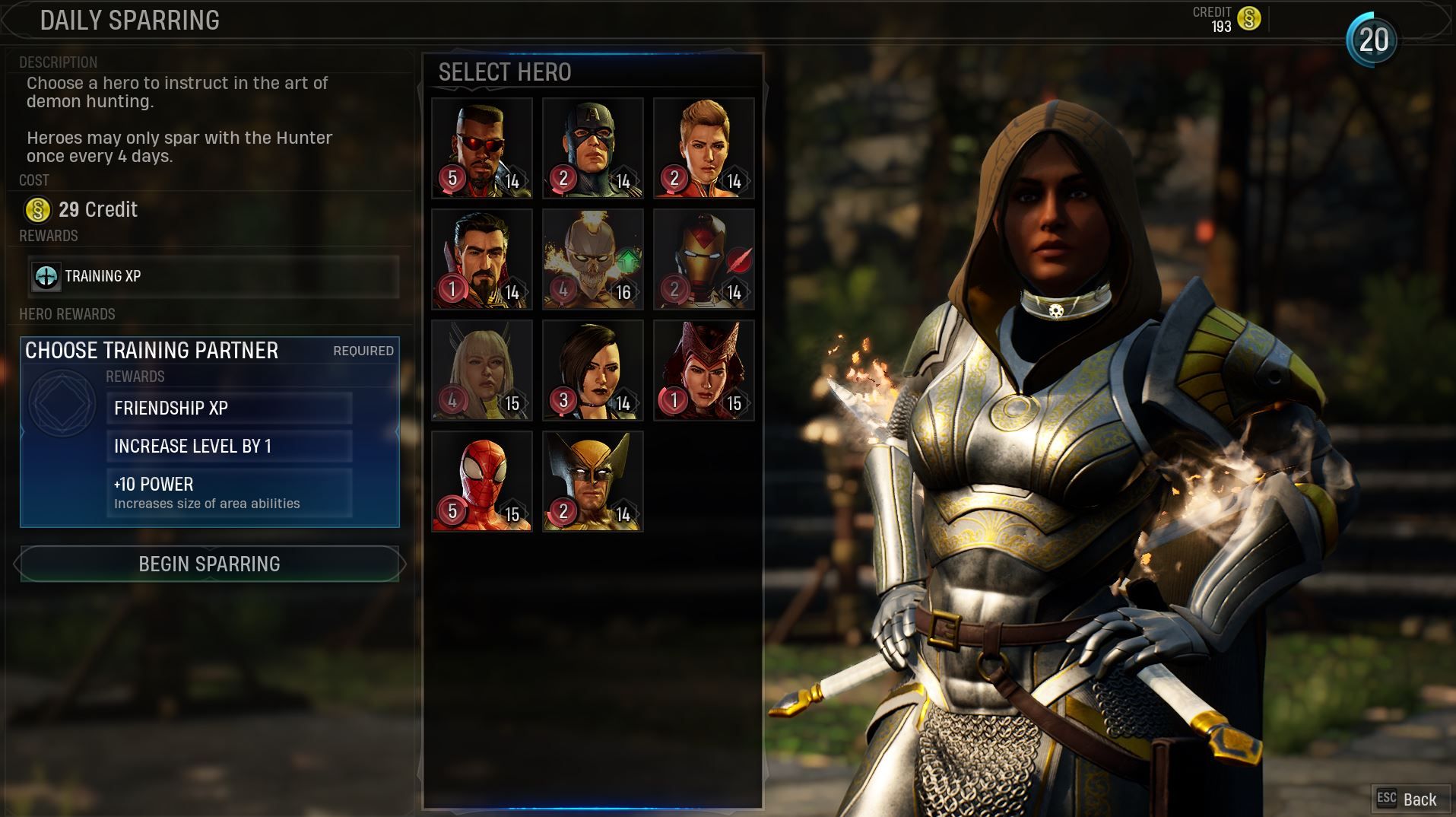 Outside of battles, there's a limitation to how much friendship experience can be earned throughout the campaign. Even if you're perfectly efficient with your gifts, always choose the friendliest dialogue options, and take every opportunity to spend time with your heroes, you probably will still only be able to hit max friendship with three heroes. By the time you've unlocked Wolverine, it's a good idea to decide which two or three you intend to go all the way with and focus on getting them there.

But that doesn't mean you can just ignore the rest of the heroes. In Midnight Suns, there's no such thing as a 'main team'. Every mission requires you to use a specific hero, and, throughout the campaign you'll be required to use all of them multiple times.

To help you keep up, Midnight Suns automatically raises the level of all your heroes whenever The Hunter levels up. Still, you'll want to continuously upgrade abilities and acquire new ones for all your heroes, not just your besties.

Focus On Your Research Requirements 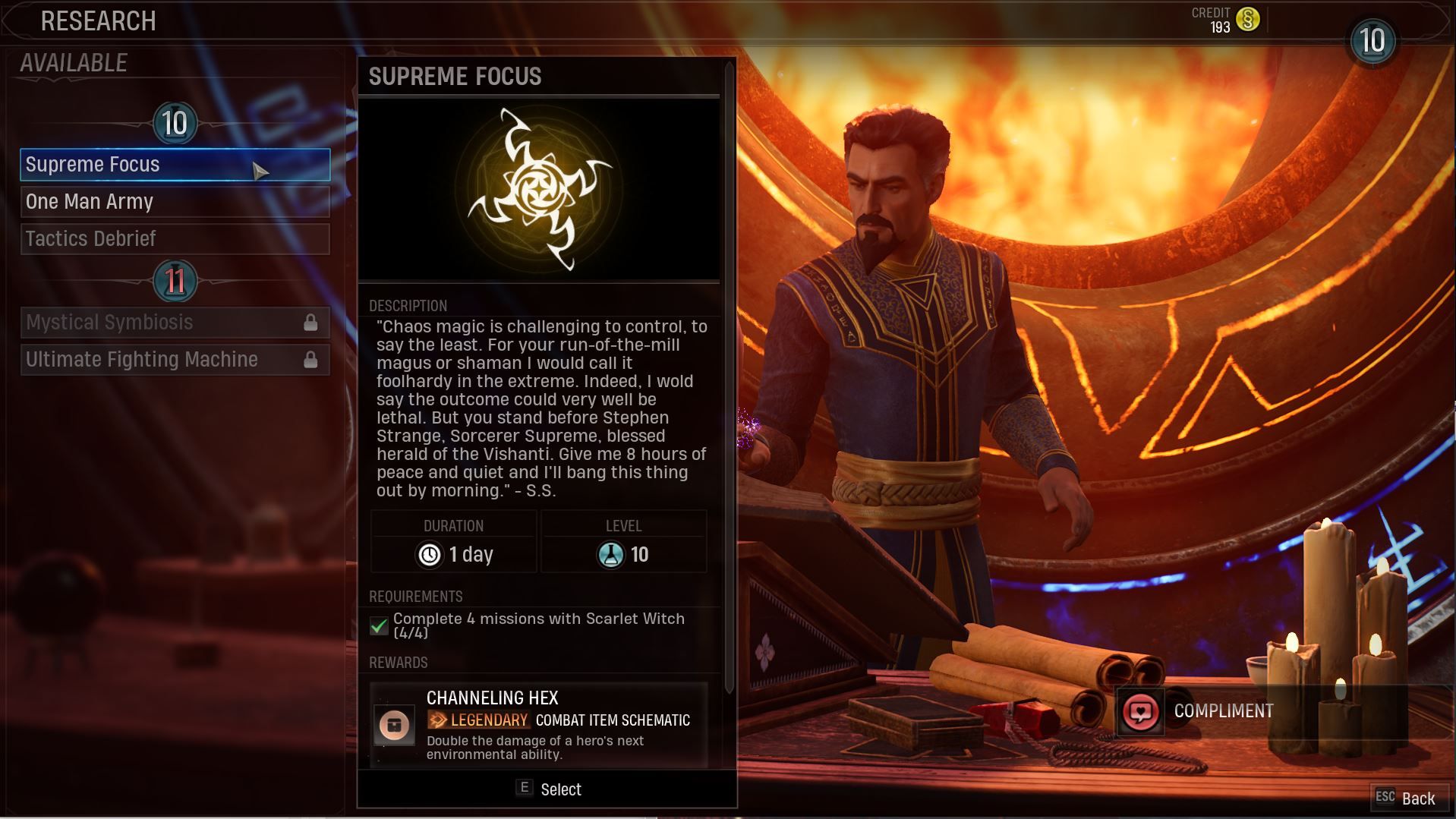 As you collect artifacts and increase your forge ranking, you'll gain access to new research options. These upgrades provide enhancements to The Forge, The Yard, and The War Room which often provide huge advantages in combat. Prioritizing these upgrades, along with ability upgrades in the yard, is your fastest and most direct way to gain power in Midnight Suns.

You can choose one research assignment each day, but only if you've met the necessary requirements. Make sure you're looking ahead each day and trying to accomplish as many of these requirements as possible so that you never have to go a day without doing any research. Many of them require you to use a specific character on a mission, so if you can find missions that also require that same character, you can be efficient about which missions you take, especially if the mission also has resources you're after.

Many Characters Don't Reveal Their Strengths At First 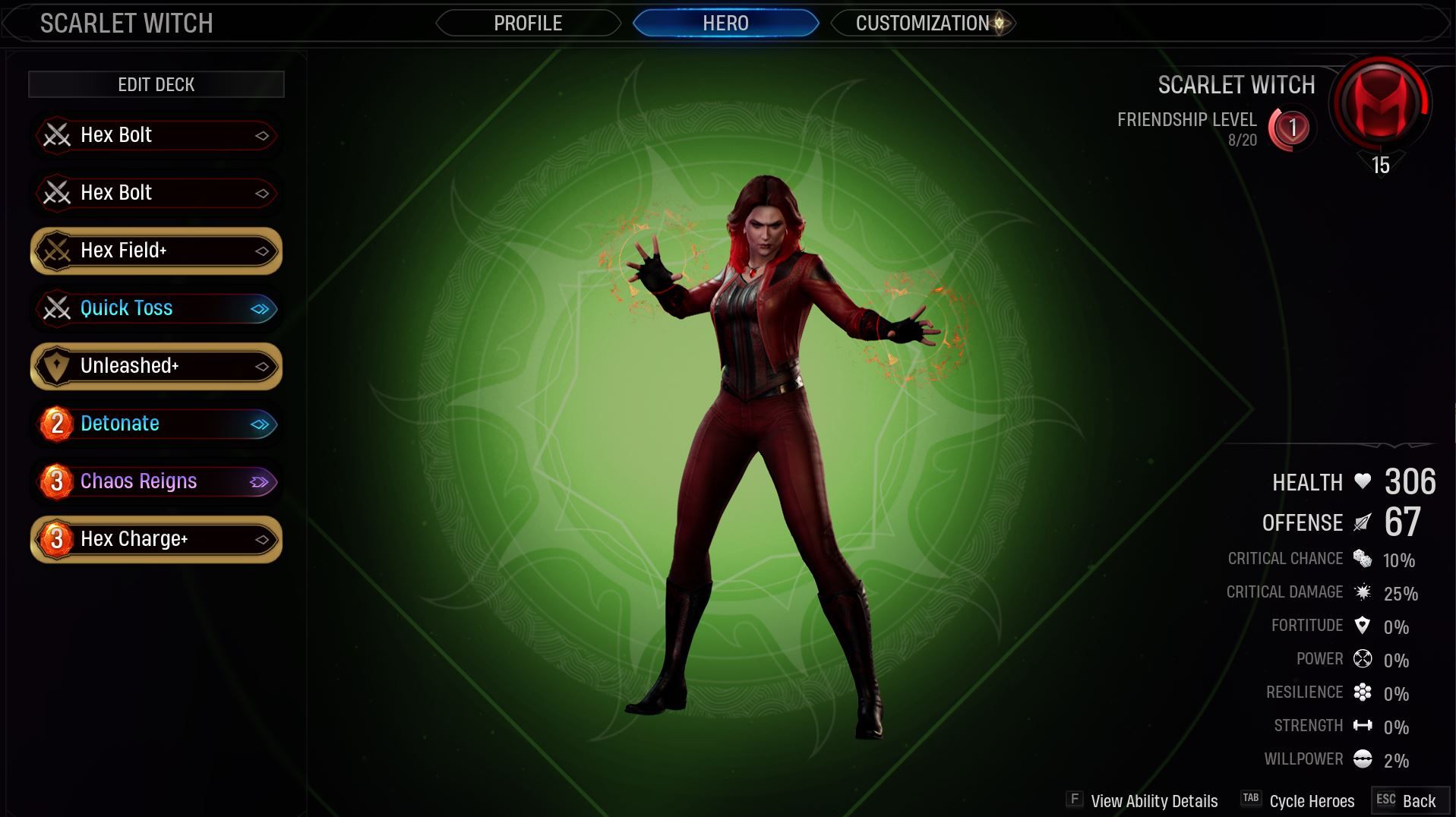 While every hero has their own strengths and weaknesses, some of them present more upfront benefits than others. Blade's ability to make large groups of enemies bleed and steal health back from them is clearly a strong playstyle, but Nico's chaotic buffs and spells can feel like more of a liability than a benefit, at least at first.

Some of the best characters don't show their strengths until you've unlocked their passive abilities through friendship, and earned some of their more powerful cards. Spider-Man really doesn't start to shine until you get some strong environmental and movement synergies, and the late-game characters, Wolverine and Scarlet Witch, start out much weaker than the rest of your team. Give everyone a chance, and you'll eventually discover what makes each of them special.

The Hunter Should Be The Team Fill 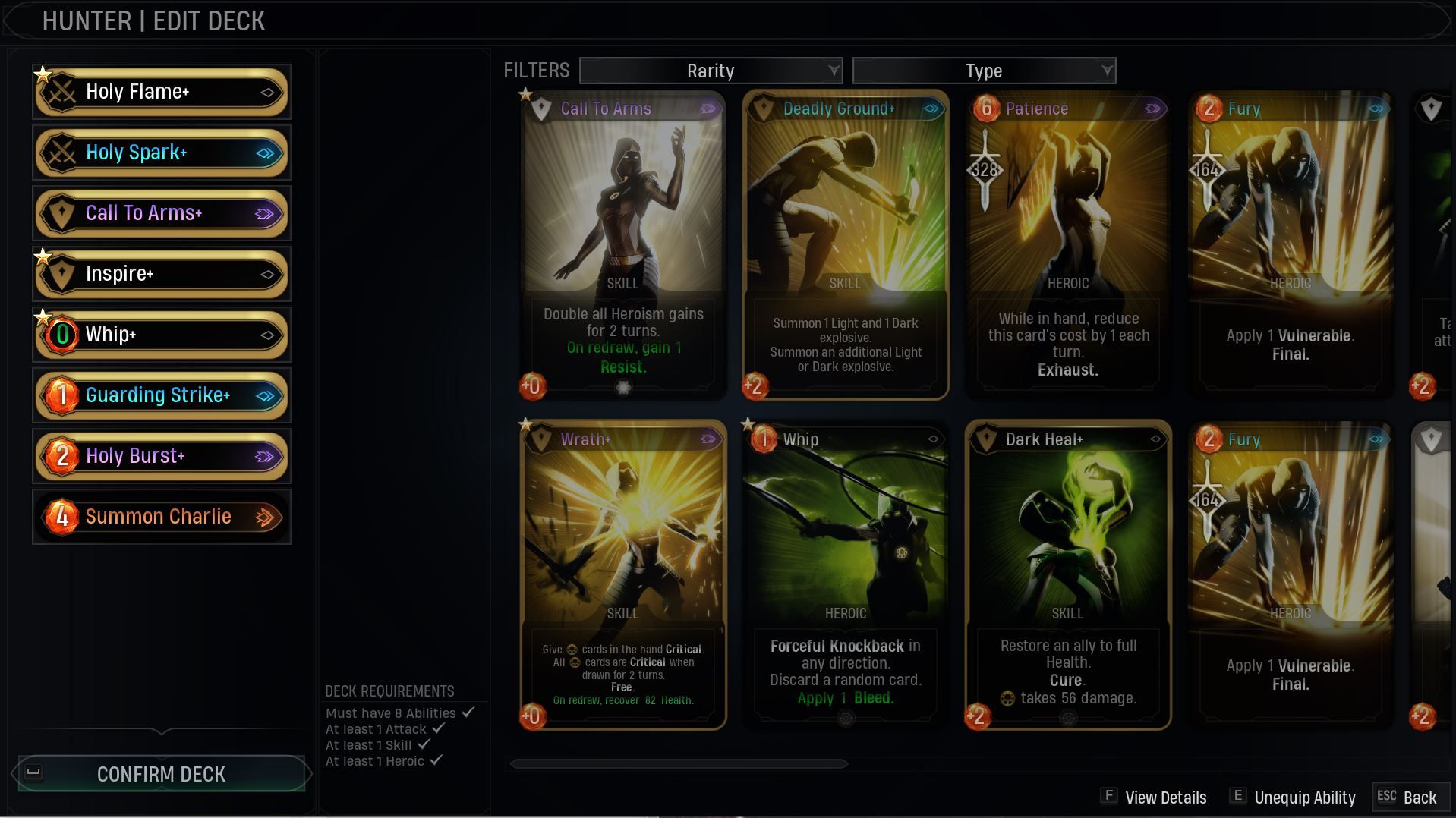 The Hunter is extremely versatile on the battlefield because they have a lot more combat options than all the other heroes. You can build your hunter to be a heal-based supporter, a powerful assassin, a beefy tank, or anything in between. Instead of choosing a path for your Hunter, it's better to have them adapt to the needs of your team.

When running a mission with a strong support character like Dr. Strange, you may find that high-damage cards are more valuable than buff cards. If you've already got a tank like Captain America on your team, you might be better off with an extra healing spell or two to make sure they stay alive.

The Hunter is the one character that can really adjust to every situation, so take advantage of that when preparing for your missions. 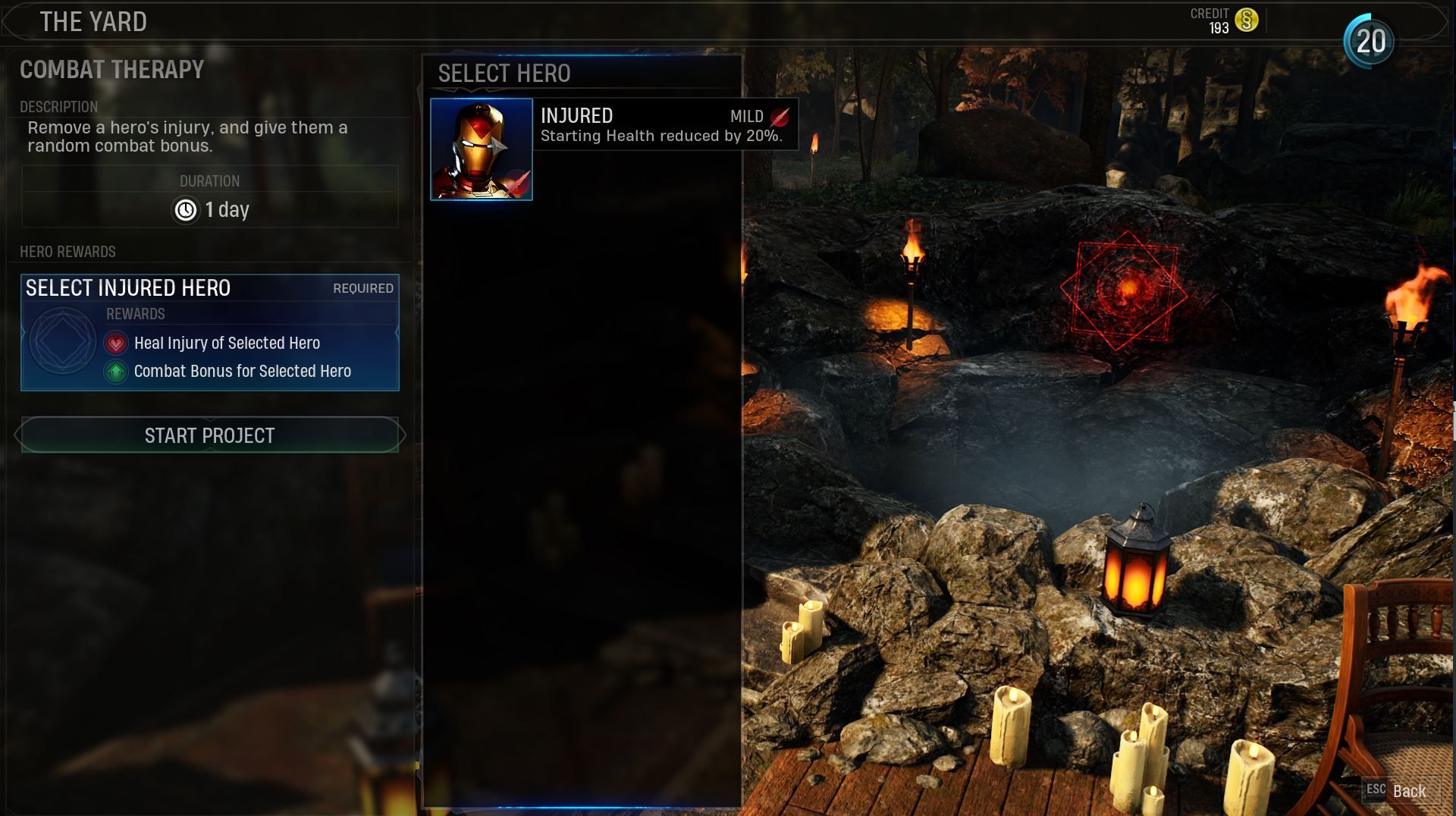 When a hero falls in battle, they'll receive an injury. Injuries range from minor to severe and cause them to take negative effects in their next battle if they aren't given time to heal. Minor injuries may give them simple negative effects, like increased cost of environmental attacks, and you might be tempted just to push through.

It's important to remember that injuries also put injury cards in your deck, which are dead cards that clog up your hand and cause you to waste your valuable redraws.

If you can help it, it's best to leave injured heroes at that Abbey. At the very least, you should pay attention to injuries and make sure you compensate for the negative effects they have. Later on, you'll be able to buy an upgrade for The Yard that turns injuries into powerful bonuses. 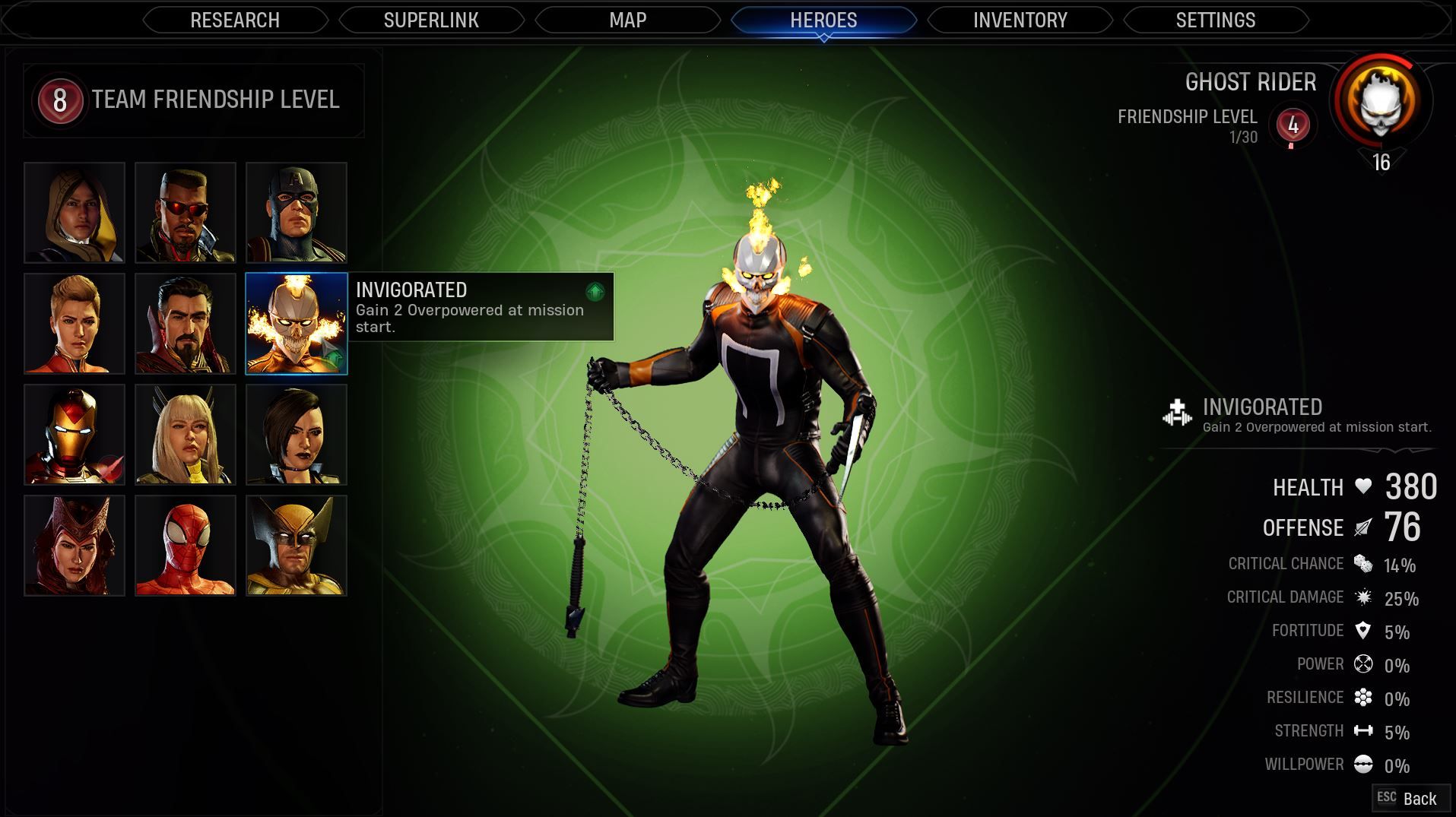 The other side of injuries are combat bonuses, which can be earned in a variety of ways, but most consistently by going to hangouts with your heroes. Combat bonuses typically only affect the first turn of a mission, but they can be hugely advantageous and put you in a winning position right away.

Legendary combat bonuses can even put a powerful combo card in your hand and give you enough heroic points to use them right away.

Consider being judicious with your combat bonuses when you have them. If you're going on an easy mission, you may want to keep your heroes with combat bonuses on the bench. Save your best bonuses for hard missions when they'll do the most good for you.

Synergies Are More Important Than Compositions 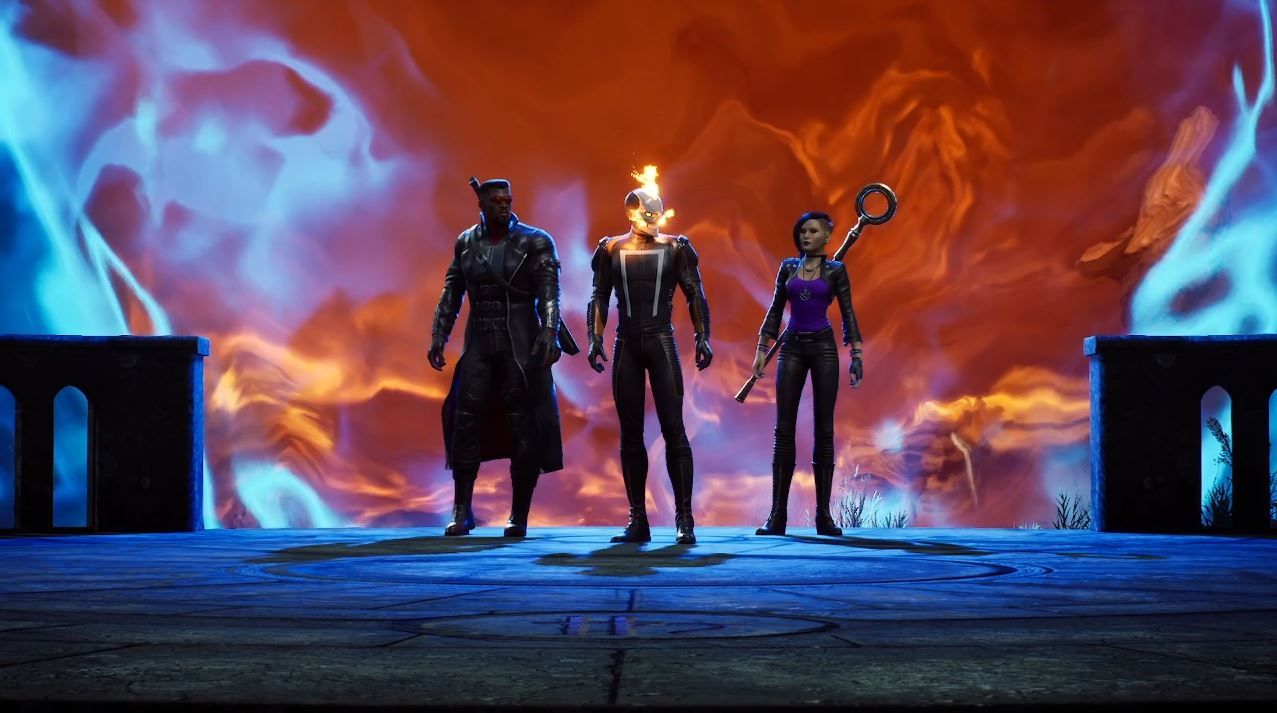 It's tempting to categorize each character into the classic RPG holy trinity of tank, support, and DPS, but there's a lot more nuance to the characters and their roles than you might see at first. Because of the requirements in each mission, you won't often find yourself in a position to build perfectly well-rounded teams. In other words, you won't always have a tank and support on your team. Often, you'll just have to make do with what you have.

Instead of thinking about characters and teams in terms of classes and compositions, start looking for ways that character abilities synergize together. Magik and Ghost Rider are two characters that work especially well together, because Ghost Rider can create open pits to hell, and Magik can use her portals to push enemies into them. Scarlet Witch relies heavily on positioning to be effective, so characters that can give you extra moves, like Spider-Man, are especially effective when paired with her. Look for these kinds of synergies, and you'll have a lot of success on the battlefield.