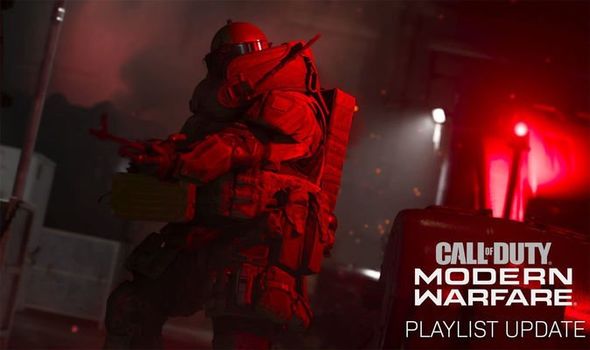 Call of Duty Modern Warfare gamers have plenty of new Season 4 content to check out this week, with COD Warzone getting another big update today. For the next week, Warzone gamers can test out Juggernaut Royale, a new mode which pits teams of trios against each other. As the name suggests, the mode continues to offer Battle Royale rules, while adding in some unique heavy weapon drops.

And it doesn’t sound like it will be a good idea to be caught flying a helicopter near one.

This means hunting down a care package so that you can don the mechanical suit, which comes equipped with a hefty mini-gun.

From what has been shared so far by developers Infinity Ward, the flow of the game is based around eliminating these Juggernaut players.

Every time one is removed from the game, it makes room for another care package to fall from the sky, somewhere on the map.

The official mode description for Warzone adds: “Ready up with a Juggernaut Suit in the Juggernaut Royale mode.

“Find one of the airdropped care packages to become the Juggernaut and use the mini-gun to attack enemies and vehicles.

“Once a Juggernaut is sent to the Gulag, a new Juggernaut care package will drop on the map, so do your best to capture the suit and take on any squad that stands in your way.”

Juggernaut Royale Trios is available to play now in Warzone and will remain an option until July 7.

The normal Call of Duty Warzone Trios mode has not been removed and can still be found under the top Battle Royale menu.

The new Warzone Juggernaut mode is one of the main draws of today’s Playlist update but it isn’t the only change made to the game.

Activision has also confirmed that they will be releasing a new Double XP event across Modern Warfare modes.

Activision has also confirmed the release of new operator Nikto, which is part of a new cosmetic bundle that can be found in the Call of Duty Store.

The official description reads: “First seen at the Crash site in Season One, Nikto is an Allegiance Operator with a checkered past. He’s had dealings with Mr. Z, the one and only Victor Zakhaev, an Al-Qatala benefactor and a major player in the continuing narrative of Modern Warfare.

“As part of the Allegiance Operators in Spetsnaz, Nikto has been part of the problem of in-fighting between the fireteams comprising the joint operations force known as Armistice. While Nikto’s personal motives are unknown, his role as a former FSB deep cover agent and tragic past with Mr. Z suggest he could be a worthwhile ally if he was allowed the possibility of revenge against his former torturer.

“His new bundle is a somewhat battle-hardened edition version of Nikto. He’s experienced first-hand the division in the Armistice and now he’s ready to face any Operator that may turn on him.”