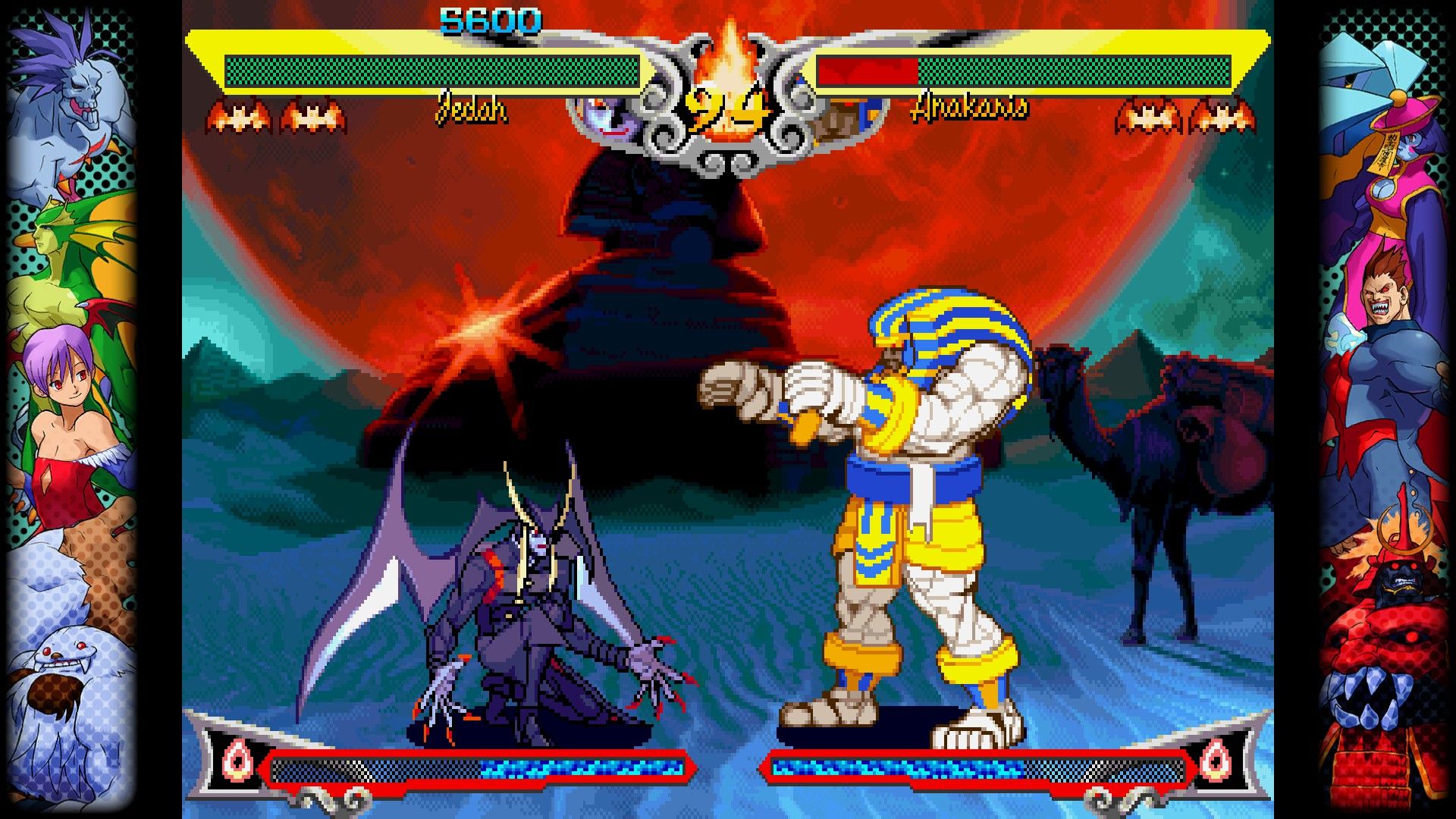 Capcom’s back with a new collection of classic arcade fighting games, this time focusing on non-Street Fighter titles like Darkstalkers.

When you think of 2D fighting games from the 1990s, no doubt your mind goes immediately to Capcom. They started off the decade with the phenomenon that was Street Fighter 2 – the game that made fighting games what they are today – and they continued with not only sequels and spin-offs but a number of other fighting games that, while often similar in style, were their own thing entirely.

Following up on 2018’s successful – albeit barebones – Street Fighter 30th Anniversary Collection comes Capcom Fighting Collection. A total of 10 games are included, the stars of the show being the entire Darkstalkers series (including previously Japanese-only entries Vampire Hunter 2 and Vampire Savior 2) and Red Earth, in its first ever release outside of the arcades.

Rounding out the collection is Hyper Street Fighter 2, Super Gem Fighter Mini Mix, Super Puzzle Fighter 2 Turbo, and the mecha fighting game Cyberbots. There are also training modes and online play for every game – unlike the 30th Anniversary Collection, which limited those features to only four titles.

While the 30th Anniversary Collection was developed by Digital Eclipse, Capcom has opted to develop this one in-house. Sadly, though, they’ve repeated one of the mistakes from the previous collection, in that while these are perfect versions of the arcade classics none of the console editions make an appearance. While that was only a minor annoyance in the previous collection, it’s more unfortunate here as the console version of Darkstalkers 3 is the only one that includes the entire roster of characters.

Darkstalkers: The Night Warriors, the first in the series, was released in 1994 and introduced gameplay elements that would become standard in future Capcom fighting games, including dashes, multiple meters, and EX specials. Featuring a cast of 10 legally distinct versions of the Universal classic movie monsters, Darkstalkers focuses on an evil alien named Pyron invading Earth in an attempt to devour it, and the creatures of the night are the only ones strong enough to stop him.

While the game boasts some gorgeous sprite-work and an interesting concept, like Street Fighter, it never really hit its stride until the second entry. While not as monumental a leap in quality as Street Fighter 2 was over the original, Night Warriors: Darkstalkers Revenge feels like a significant upgrade. It covers the exact same story and characters as the first, making it more of a Street Fighter Alpha 2 to Darkstalkers’ Alpha 1.

Darkstalkers 3 was originally released as Vampire Savior, along with its two previously Japan-exclusive updates: Vampire Hunter 2 and Vampire Savior 2. Vampire Savior continues the Alpha analogy, as it feels like Alpha 3, in that it has the same DNA as the previous two but makes some notable changes, such as health bars carrying over between rounds and the general pace of matches feeling much faster.

The other main attraction in this collection, in Capcom’s eyes, is the first ever home release of 1996’s Red Earth. This is a bit of an oddity as it’s part fighting game, part role-playing game. Red Earth has you fighting through a campaign of eight boss fights. What makes it unique is that with each battle your character levels up. The benefits of doing so range from better defence to adding entirely new moves to your character’s repertoire. There is a versus mode as well, but it’s limited to the four player characters.

Another one of Capcom’s lesser known fighters joins the collection in the form of mecha-fighter Cyberbots. In Cyberbots you play as one of six pilots; however, this choice has no bearing on the game outside of the storyline. The real choice is the 12 selectable mechs. These machines range from humanoid robots like Blodia to tanks like Vise. While Cyberbots has a cool concept, the gameplay doesn’t feel as tight as the other games, making it one of the weaker entries in the collection.

Super Gem Fighter Mini Mix pits chibi versions of various Street Fighter, Darkstalkers, and Red Earth characters against each other, with a focus on comedic elements and controls reminiscent of the simplified control schemes you see as options in modern fighters (including Street Fighter 6). The main feature is the titular gems, which, when collected, power up the character’s special moves. The game is also a love letter to Capcom in general, with sly references to their history and characters beyond just the three main games.

Finally, we have Super Puzzle Fighter 2 Turbo and Hyper Street Fighter 2. Puzzle Fighter has always been one of the greatest multiplayer puzzle games ever made, featuring the same chibi characters from Gem Fighter, but it’s not really a fighting game so it’s a bit of an odd one out here.

Unlike many retro collections, this boasts an in-depth museum mode, featuring the full soundtracks for each of the games. There’s also a litany of promo art, concept art, design documents, and even arcade pamphlets and the move list cards found on the arcade machines themselves. That’s in addition to more typical extras like different borders and screen filters.

Game-specific options like being able to perform specials and supers with single button presses, and selecting secret characters like Akuma in Hyper Street Fighter 2, are also included. The collection has quick save states, but, in a strange move, you can only have one save state over all 10 of the games. So, for example, if you save in Darkstalkers it will remove your save in Cyberbots.

While we’ve not been able to test the online too much over the review period, due to the lack of players, the few matches we have played have been fairly stable – with only the occasional hitch when playing players across the ocean. The online mode has ranked, casual, lobbies, and spectator modes across all 10 games.

While it would’ve been nice to see other 90s Capcom fighters, like Jojo’s Bizarre Adventure and Rival Schools appear, the selection here is still good. Capcom Fighting Collection is an interesting look at some of Capcom’s more esoteric fighters and a worthy follow-up to the Street Fighter 30th Anniversary Collection, even if it does make some of the same mistakes when it comes to console versions.

In Short: A good quality compilation of some of Capcom’s more overlooked fighting games, although there are a few filler titles and some unfortunate omissions.

Cons: Features and characters included in later console releases are missing; there’s no version of Vampire Savior with all characters, which had been present in earlier Darkstalkers collections.