Clubhouse has drawn a big crowd lately, but it still has to introduce a way to monetize its popular social audio sessions. In the meantime, independent startup Clubmarket has figured out a way to do just that.

Clubmarket is setting up a sponsorship marketplace for Clubhouse program creators, cofounder Tomer Dean told VentureBeat in an email. Monetizing Clubhouse has been a popular topic, even inside Clubhouse sessions.

Available only on iOS, Clubhouse has been in beta testing for a year. But it has expanded rapidly in the past few months and received $100 million in funding at a $1 billion valuation in December, with backing from venture firm Andreessen Horowitz. Mobile analyst and insight firm App Annie estimates that Clubhouse has had 12.7 million downloads to date, including 1.3 million since March 1. About 3.7 million of those downloads are in the U.S., followed by 1.8 million in Japan and 735,000 in Germany.

But while the audience is growing fast, Clubhouse doesn’t have ads or charge fees for users. There’s also no way for speakers in the Clubhouse rooms to charge money for their talks.

However, Dean said the door is open for sponsorships. Clubmarket, which is still in development, will give Clubhouse creators access to paid brand sponsorships. The young startup has yet to announce exactly how many creators it will accept initially, but the number will likely be in the thousands, Dean said. 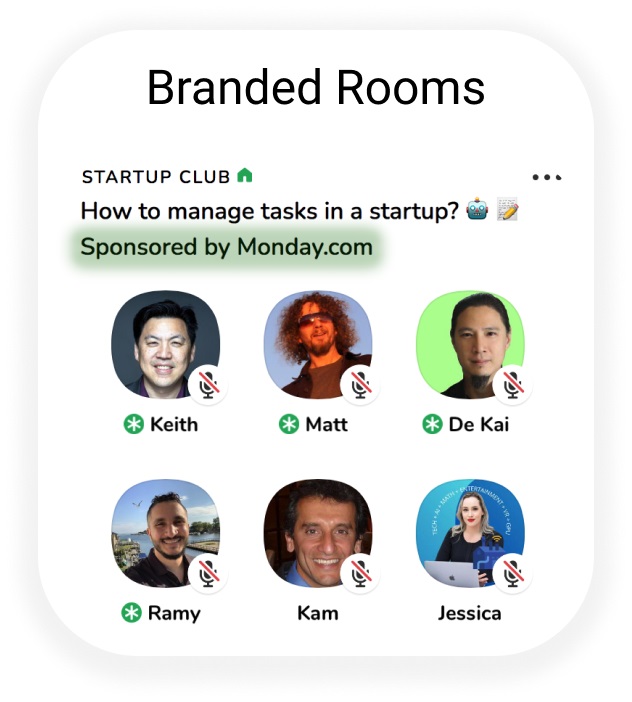 Above: Clubmarket will help speakers get gigs on Clubhouse.

The marketplace will allow brands to sponsor Clubhouse rooms in various ways:

Pricing for the different “gigs” will vary, with every creator charging their own rates. From the Clubmarket website, the estimation tool indicates that a tech-related Clubhouse room with 500 listeners will be able to charge up to $1,000 to $2,000 for a co-branded sponsorship. The “drop-in audio” market is still in infancy, so it’s likely prices will rise as user adoption increases.

The idea for the marketplace came from a Clubhouse panel. Last month, Product Hunt founder Ryan Hoover hosted a community town hall on Clubhouse. While discussing the surge of Clubhouse-related services being launched on Product Hunt, he mentioned a missing gap. He commented that the world would likely see a sponsorship marketplace popping up soon.

One of the listeners in that room, a serial tech founder, got a tingle of excitement. Having previously launched a two-sided marketplace (that closed down), he knew his team could develop something and get it to market in a matter of weeks. The marketplace is currently in the development stages and will begin onboarding initial users in the upcoming weeks.

This week, Clubhouse itself announced its first accelerator program for 20 creators to work with brand sponsors, but the program is not yet available to the general public. Besides Dean, cofounders include Peleg Aran and Nimrod Kramer. The crew have previously founded several venture-backed startups and marketplaces.