The cast and characters are already set for Matt Reeves’ The Batman, which will be returning a handful of popular villains from DC lore, including Catwoman, The Riddler, and The Penguin. One classic villain that isn’t credited to appear is Harvey Dent’s Two-Face, but that hasn’t stopped one fan from imagining who would portray the conflicted district attorney.

The wait for The Batman’s release in March, 2022 will feel as lengthy as the Caped Crusader’s long Halloween. With filming wrapped, Reeves and his crew will now turn to post-production, investing in reshoots and touching up Colin Farrell’s Oswald Cobblepot prosthetics. Paul Dano and Zoë Kravitz will also present fresh renditions of the villains Edward Nashton and Selina Kyle, leaving another primary antagonist to fill a possible sequel. Following on from Aaron Eckhart’s portrayal of Two-Face in Christopher Nolan’s Batman trilogy, one fan artist has put Game of Thrones actor Nikolaj Coster-Waldau in Dent’s suit.

The Instagram illustrator ‘spdrmnkyxxiii’ is known for creating character concept art, and the man we know as Jaime Lannister has no problem flipping Dent’s coin either. The artwork shows Coster-Waldau in a black and white suit, sporting a silver fox look with half of his face bereft of good looks. The actor has yet to enter the DC Universe – or Marvel for that matter – meaning there could be a role waiting for him in the character roster. Fan art like this also aids casting agents by giving them, in this case, an accurate depiction of Coster-Waldau’s Two-Face without the need for imagination. 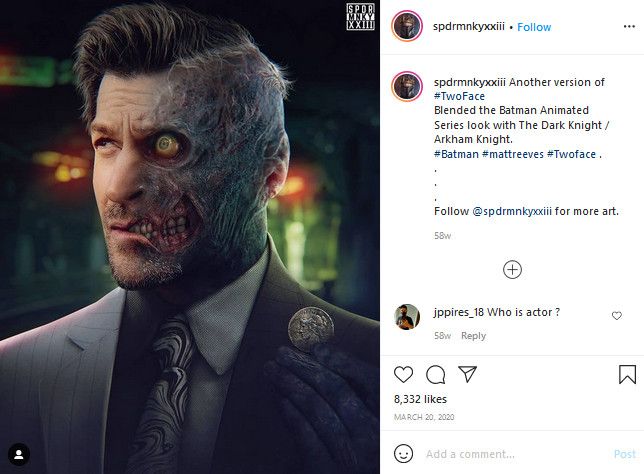 The actor also appeared within the video games community, when a fan created a mock trailer of The Last of Us. Using clips from his other films, Coster-Waldau assumed the role of Joel, complete with a flannel shirt and rugged exterior. The actor was a fan-favorite in the running for HBO’s upcoming adaptation of the Naughty Dog game, but Pedro Pascal became the company’s choice.

Another actor to breathe new life into a well known character is Jeffrey Wright of Westworld fame, who will debut as James Gordon in The Batman. As the DC Universe expands, Wright is expected to become involved with the spin-off prequel show Gotham PD, which will focus on Gordon during the early days of the Gotham City Police Department.