In 1993, I thought Cool Spot was simply a cool spot. A fun, round little guy who loved bouncing on balloons, killing crabs, and doing front flips. I was innocent then. A fool. Years later I learned the truth: that this swaggering, shades-wearing asshole was in fact an anthropomorphisation of the red dot from the 7 Up logo. I was playing a commercial for a soft drink and I didn't even know it. But it's not my fault, because I was playing the PAL version of the game.

In the early 1990s, 7 Up was pitched in the US as 'The Uncola', whatever the hell that means, with Cool Spot as its mascot. He's the archetypal Poochie: a character with 'attitude' designed by overpaid marketing executives to cynically appeal to children and teenagers. It worked, though. Cool Spot was so inexplicably beloved, he somehow survived till 1997 and spawned an empire of merchandise—including a series of wildly successful platforming games. 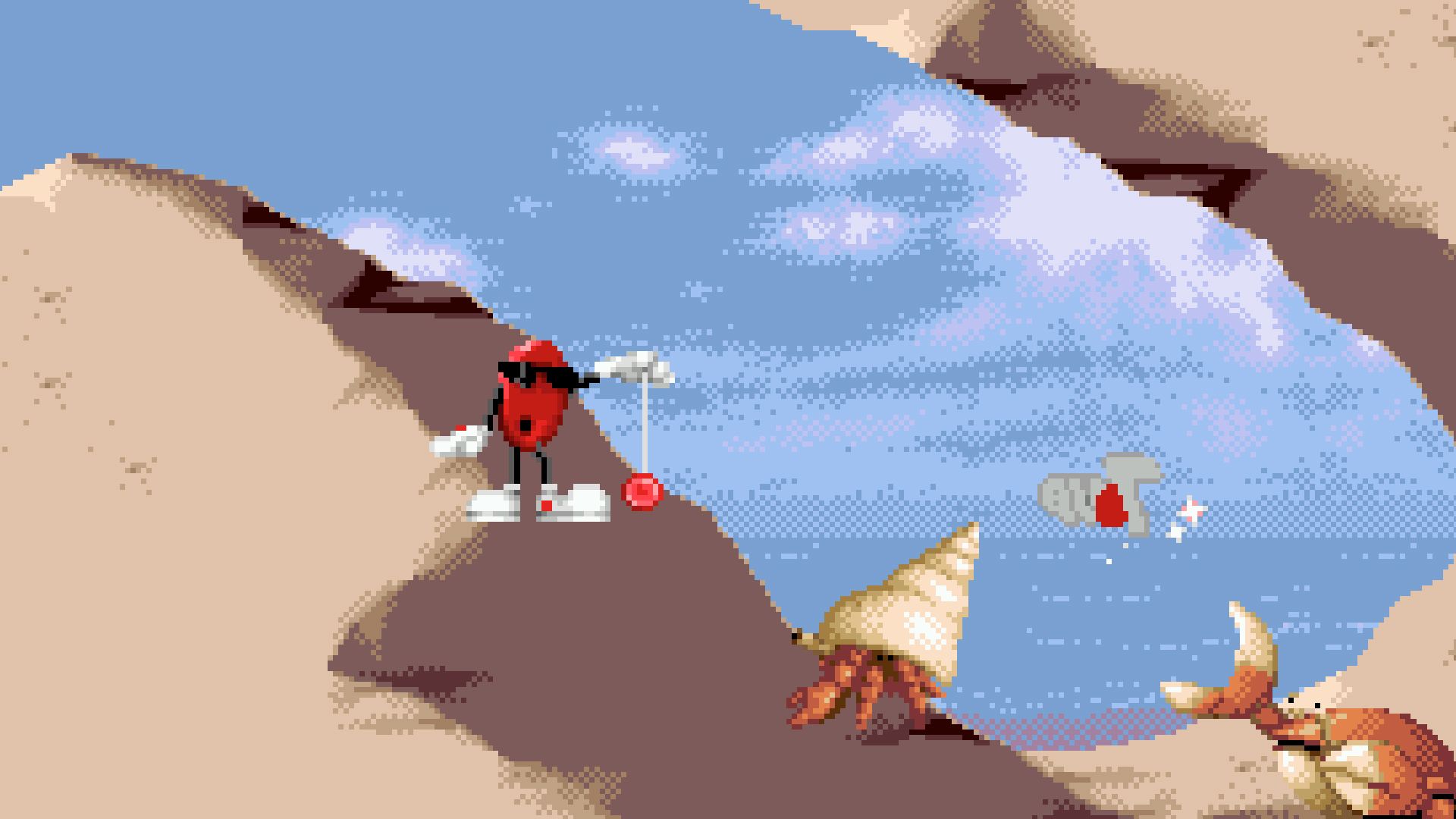 The US versions of Cool Spot open with our hero surfing on a giant bottle of 7 Up. It's highly unsubtle, but makes it obvious from the very beginning that this game is really an elaborate piece of marketing material. However, in Europe the bottle has no label. Add to this the fact that Cool Spot wasn't actually the drink's mascot on this side of the pond—we had that weirdo Fido Dido instead—and it's obvious why we didn't realise we were playing an ad.

Cool Spot was published by Virgin, who replaced all mentions of 7 Up in the PAL release with references to its own brand. In the game you grab letters to spell out a word, which earns you an extra continue. In the US version the word is UNCOLA, a reference to that stupid marketing buzzword, but in the PAL version it's VIRGIN. Some power-ups were also changed, swapping the 7 Up logo out for the Virgin V. A lot of effort went into erasing its existence.

Kids in the UK went wild for Cool Spot, myself included, and I'm still not entirely sure why. It's the most generic of platformers. But it looked good, and sometimes that was enough to make the fickle school playground buzz with excitement. The animation was excellent, the art was vibrant and colourful, and the oversized environments—everyone remembers that giant Walkman wedged into the sand in the beach level—were fun to bounce around in.

But unbeknownst to us, this charming little game about an acrobatic dot was actually just digitised capitalism. Even with the 7 Up logos removed, our collective subconscious was still being subliminally tickled by the deep-seated desire to drink a cold, fizzy, refreshing beverage. The green plastic bottle, the character adapted from the logo, the fact that he shot bubbles out of his hands. The seeds were being planted. Man, this is making me thirsty.

But Cool Spot wasn't the only corporate mascot infiltrating pop culture via the medium of video games. This was rife in the '90s, including Chester Cheetah—the face of dusty snack Cheetos—starring in his own platformer. Domino's mascot The Noid got one too. There was even a Doom clone, Chex Quest, based on the breakfast cereal. Product placement in video games is still a thing, but at least it's generally a touch more subtle these days.

In 1995, Cool Spot appeared in another video game. Spot Goes to Hollywood was an isometric platformer with levels based on various movie genres, and an enhanced version was released a couple of years later for the Sega Saturn and PlayStation. After that he vanished from the face of the Earth, and hasn't been seen since. But with misty-eyed '90s nostalgia at an all-time high, don't be surprised if 7 Up wheels his decaying corpse out at some point.