Cuphead is one of the most challenging games of the last decade. Revered for its unforgiving boss battles and stark skill curve, players are sure to struggle at several points during their playthrough. One mistake can ruin a good run, forcing you to restart from the beginning. It’s an exercise in perseverance only the most determined can overcome.

After defeating the introductory bosses in Inkwell Isle Two, Cuphead can take on tougher enemies like Wally Warbles. Woody Woodpecker may inspire him, but he’s far from friendly. Like Djimmi, this boss takes Cuphead to the skies to fight this feathered fiend. It’ll take a cool head and a solid plan to beat this baddie. This guide should help you cook this bird-brain.

Before heading into the Aviary Action, you’ll want to make sure that Cuphead is equipped with the right tools. Cuphead will have fewer options to choose from for this encounter because it’s an aerial level, but they’re important all the same. Don’t forget to equip the Smoke Bomb ability from the menu. Gaining brief invincibility after shrinking can help preserve health in tight situations. Wally’s boss fight is filled with tough moments that make this ability almost essential. 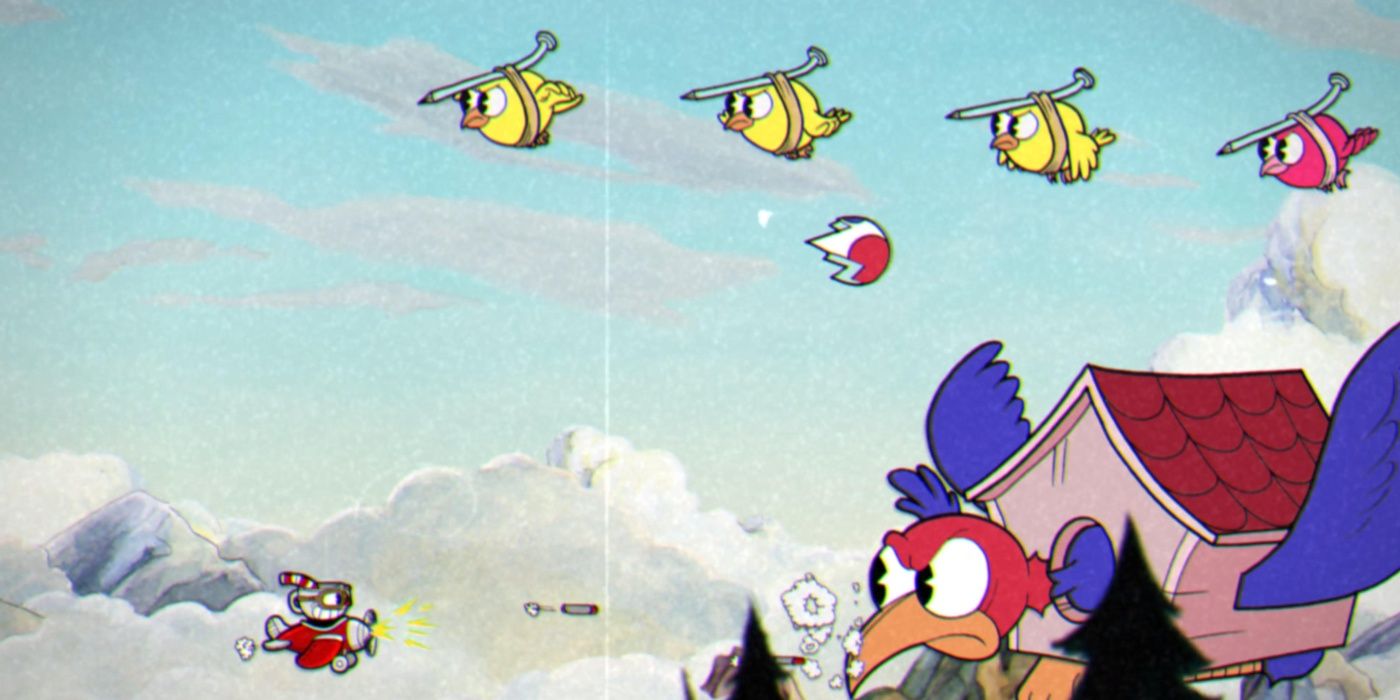 Wally’s boss battle starts with him hiding inside a wooden birdhouse. From this birdhouse, he’ll enact several harrowing attacks. The first move at Wally’s disposal is Scrambled Shots. Wally will spit up an egg that flies to the left side of the screen. Once the egg reaches the level border, it’ll erupt into three separate pieces that rebound back towards Cuphead and Wally. Should Cuphead touch the egg or its fragments, he’ll take damage. Dodge the egg while it’s intact, keeping an eye out for the fragments that spawn after it hits the wall.

Wally Warbles won’t enter this encounter alone, either. Occasionally, a set of four Nail Birds will come flying across the screen. These birds can be avoided or annihilated based on player discretion. Be on the lookout for the pink nail bird that spawns in each set of these minions. Parrying it will help build the EX Gauge, something invaluable for a fight where Cuphead will want to use his super multiple times. Try to keep firing as often as possible, aiming for Wally’s face, as this is where he’ll take damage. 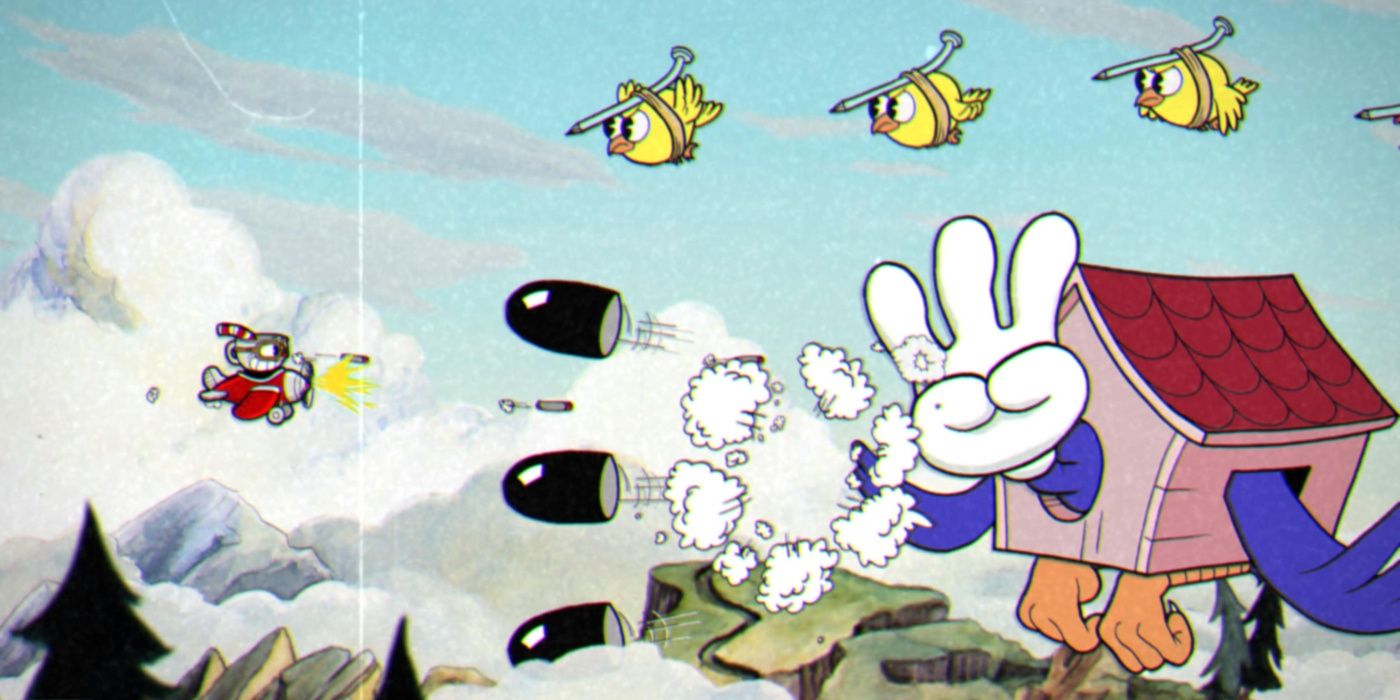 Wally’s second ability is his Trigger Fingers attack. Here, he’ll transform his head into a hand that fires off three bullets after his wrist flicks. Try to fly in between the bullet barrage, shrinking if necessary to avoid taking damage. While keeping an eye out for the Nail Birds, do your best to unload into Wally with Cuphead’s primary fire mode. The bombs will come in handy later in the fight, but they’re not useful in this phase. 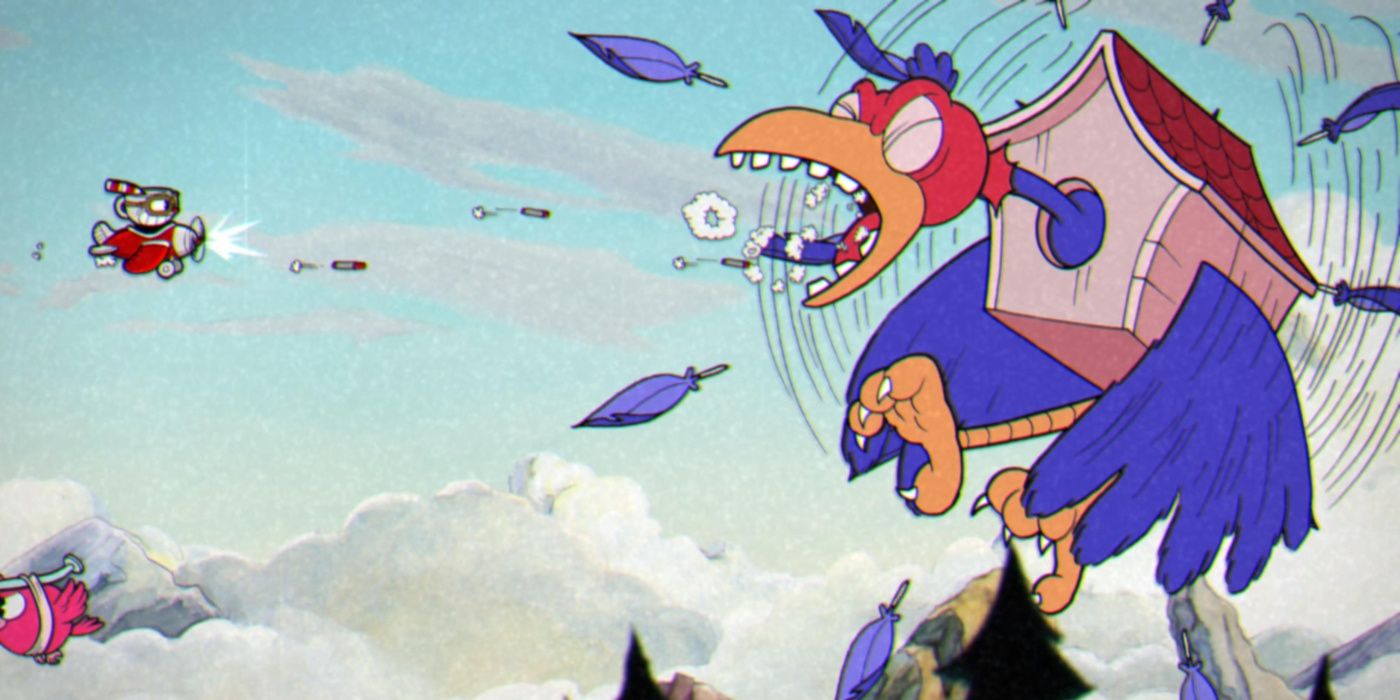 After Cuphead has done enough damage to Wally, the boss will pitch a fit and initiate Phase Two. Here, Wally will use his Feather Flap attack to shoot feathers out in all directions. Cuphead will need to keep attacking Wally while carefully weaving through each of these projectiles. Use the plane’s primary fire mode, only shrinking in emergencies. (Trying to fire in Cuphead’s smaller mode drastically reduces his range and damage.)

Wally will tire after some time and take a brief break before resuming his temper tantrum. If you’ve got enough energy for a super, feel free to use it here if you’re worried about taking damage to expedite the encounter.

Eventually, Wally will fall from his birdhouse, slinking away, making room for a new foe in the following phase: his son, Willy Warbles. 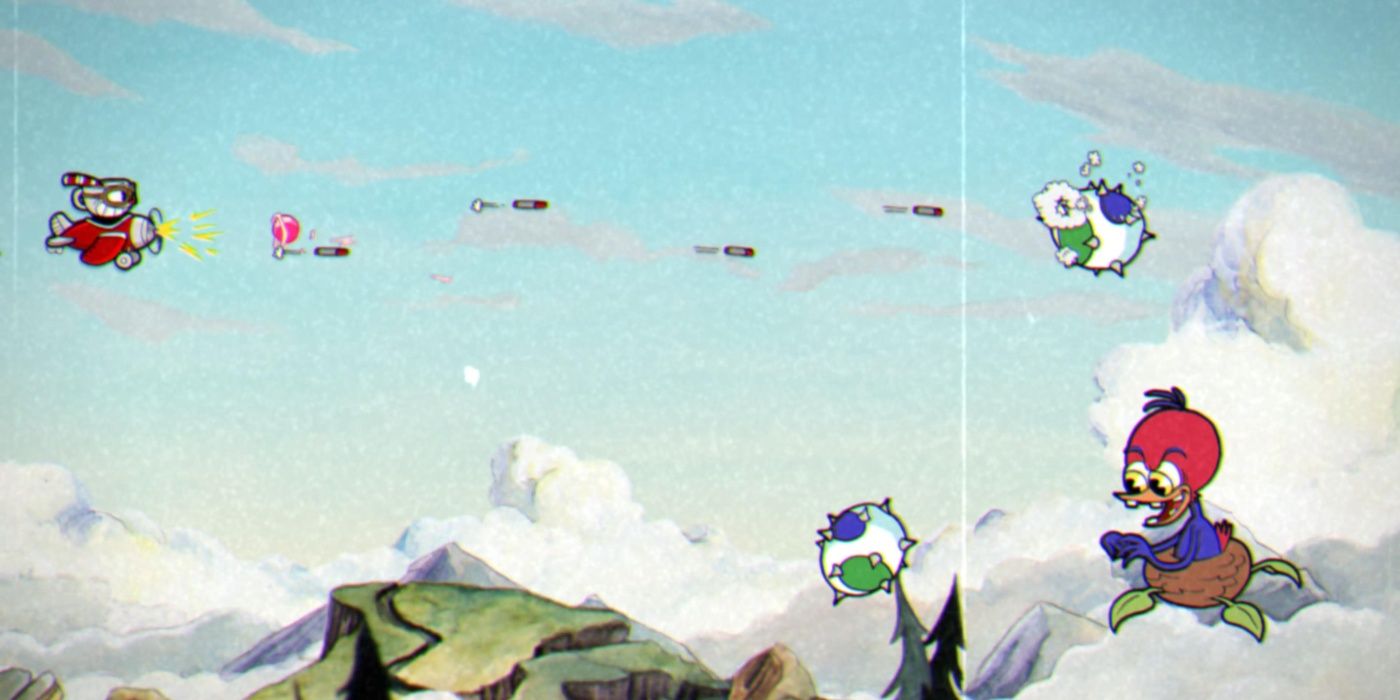 Wally’s son, Willy, is a smaller and far more mobile boss. Unlike his father, Willy will fly around the entirety of the stage quickly, protected by his Ommulon Orbirders. These spiked egg shields will rotate around Willy at first from a distance but will eventually encroach on him as time moves on. This moving shield will alternate over time, leaving Willy open when the eggs branch out (as shown in the above image). Try to take advantage of this opening, unloading Cuphead’s primary fire into Willy when the eggs aren’t defending him. Just be prepared for him to chase Cuphead down in any portion of the map.

On top of his shields and improved movement, Willy also sports a Raygun Blast ability. This weapon will fire pink bullets that Cuphead can parry. When you see him pull out his raygun, be ready to deflect the attack and absorb some energy for the EX Gauge. If you’ve saved your Super until now, use it at the start of this phase to deal damage early and make room for extra EX energy via raygun parries. Keep firing until you see Willy start to cry, as this is the cue for Wally’s Final Phase. 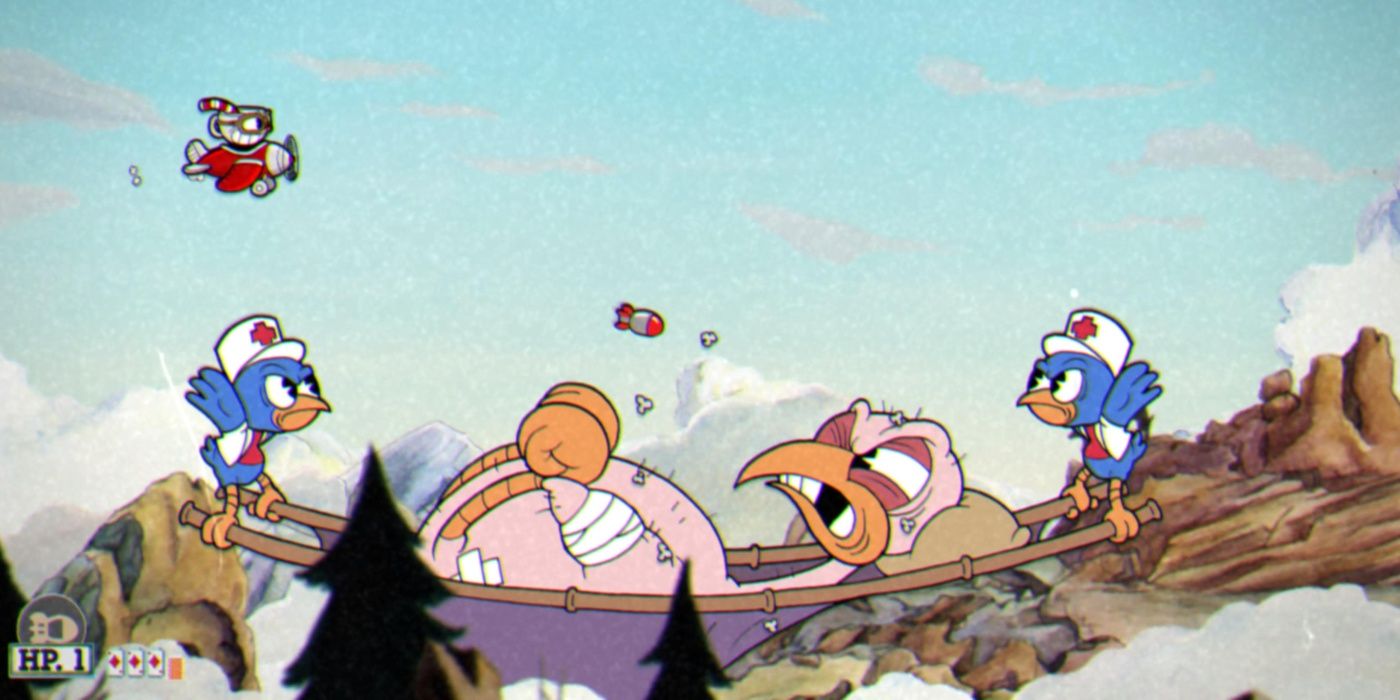 An injured Wally will return to the field after his son is defeated. Unlike his previous forms, he’ll be stationed below Cuphead in a position where primary plane fire can’t reach. This is where the bombs come in handy. Swap over to the bombs and hit the bird from above.

While you’re focusing fire on the aviary enemy, watch out for his handful of new moves. First, he’ll use his Heart Attack to spit his heart out directly above his head. Once it’s out, it’ll shoot three separate bullets to the right. If you’re worried about being hit, shrink down to evade these bullets, but swap back as soon as possible. Cuphead’s bomb attack is your best bet at taking this bird down quickly.

Wally will also shoot mounds of garbage out of his face at Cuphead with his Trash Talk. This move will turn his head into a garbage can that unleashes boots, apple cores, and fish skeletons. Try to weave through the refuse, shrinking when necessary. Don’t forget that your secondary fire can use an EX move of its own for a single card, one that will dish out substantial damage. Hold button used for supers when Cuphead is shy of five cards to enact this ability.

The nurse birds will spew pills via Pillapse at Cuphead from below, so don’t fly directly above them. They’ll break into two separate pieces in midair, darting off to the side, so keep an eye on them. Some of these pills will be pink and can be parried, so don’t miss the chance at an EX Gauge boost when they spawn. Keep attacking until Wally is knocked out. Grab his soul contract, and you’ve completed this boss encounter.

Next: Cuphead: How To Beat Beppi The Clown

Tai Hofmann is a gaming guide writer for TheGamer and list writer for GameRant. You can find him on Twitter @MI2_PICKLES