Cuphead: The Delicious Last Course was the black sheep of the Tribeca Games Selection. For one thing, it’s not actually a game, just a DLC pack for an existing one. It’s also not particularly narrative driven – some cups sold their souls, now they fight bees and ships, don’t worry about it – or unique in the way the other games here are. Only A Plague Tale (which was unavailable remotely) and Oxenfree 2 are even a sequel, and it comes with a whole new cast and narrative. Cuphead: The Delicious Last Course is a DLC for Cuphead. It is good. That’s sort of it.

The art style is charming, even with the unspoken racial connotations of channeling the aesthetic of ‘30s animation, and the play is as zippy as ever. I played against one of the game’s bosses as part of the demo, and in the 25 minutes I had with it, got to within about six hits of victory. For a new boss, that I met cold, having not played Cuphead in about a year, I’m happy with that. Especially since, as a journalist, it’s a well known fact that I’m terrible at all video games.

The boss in question was Snow Cult Scuffle. It’s hard to empirically decide where it fits in with the other bosses, especially after so long away, but I can say with confidence that this is one of, if not the, most varied boss across Cuphead’s roster. If this is what the DLC has in store consistently, it will be a very popular step up for a game that was already a runaway hit with fans. 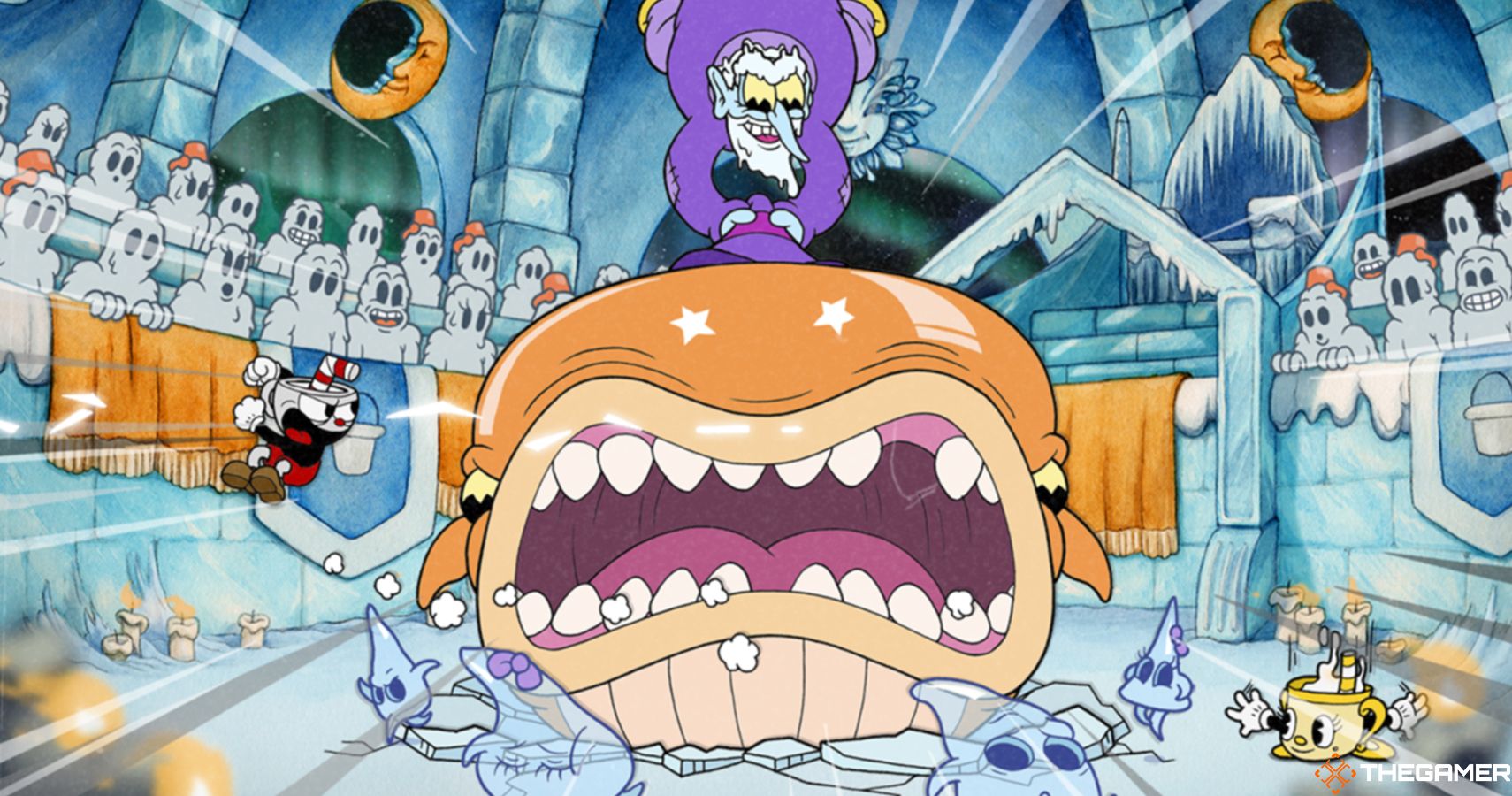 There were three stages to the fight, all of which had similarities to existing bosses, but never all at once. Of course, all Cuphead bosses are multi-stage affairs that change as they go, but none to my mind are so distinct from each other. The first stage sees you facing a wizard who flies above you, dropping projectiles and leaving hazards on the floor – it’s most similar to stages in The Root Pack or Sally Stageplay, falling in between for difficulty. The second stage, in my experience the easiest, is a snowball yeti who sometimes becomes a fridge. He rolls across the screen, sets traps on the ground, and throws things out at you – some of which boomerang back from offscreen. It’s the most typical Cuphead boss, kind of like Werner Werman, Baroness Von Bon Bon, or Ribby and Croaks.

The third stage is the toughest, but part of that is the pressure it brings, and the lack of lives you’ll likely have left. I never made it with more than a single one to spare. It raises you off screen on snowy platforms, with the boss shooting projectiles at you while you jump around in a circle. It’s like the last stage of Grimm Matchstick, though maybe not quite as difficult. The only boss that comes close in terms of the different skills it asks of you is Beppi The Clown, and even he doesn’t quite have Snow Cult Scuffle’s variety. 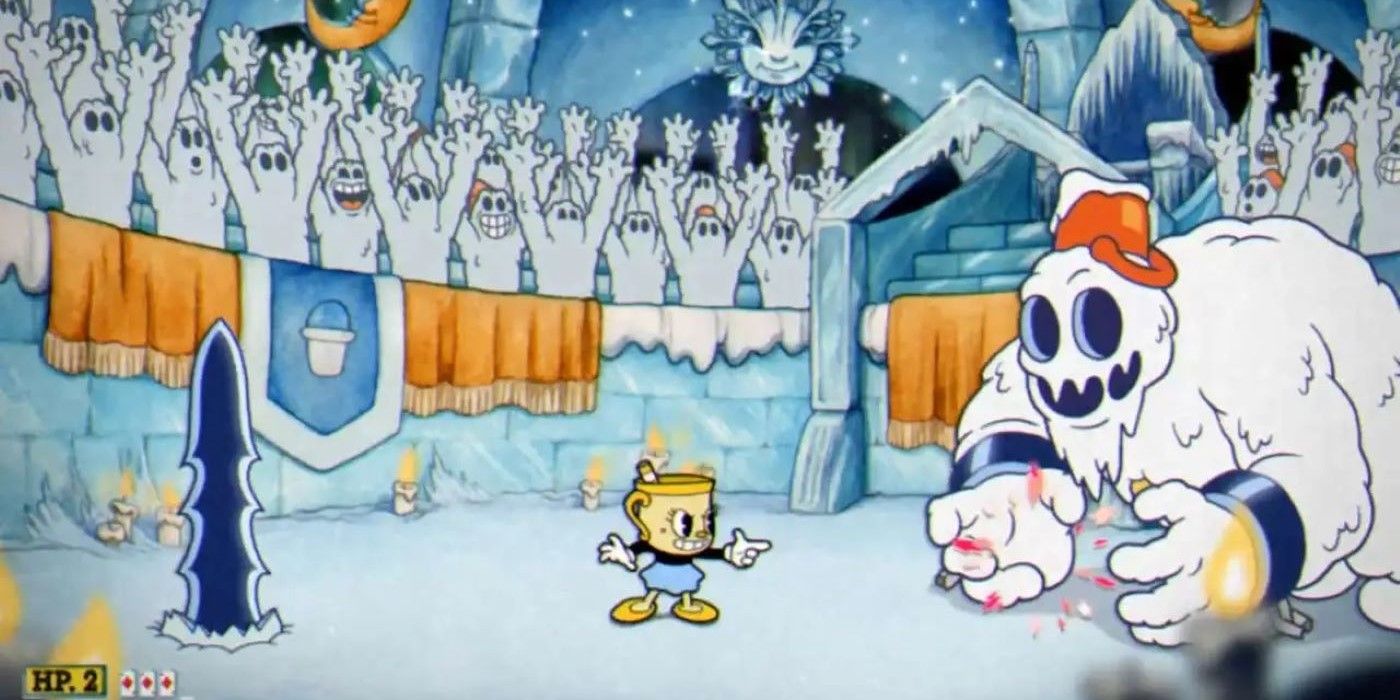 In the base game, you could play as the titular Cuphead or his very own Luigi in Mugman. This time around, Ms. Chalice is added, who I suppose is Peach in this metaphor. She can be played in the base game too once the DLC is picked up, so you won’t feel short-changed. But as the characters have no real personality, it’s difficult to see what she adds to the game. It’s not impactful enough to feel like female representation, but also avoids coming off as desperate and insulting. It’s the same Malibu Stacy, but now she has a new hat.

A nice hat, mind. Ms. Chalice had two attacks in this demo, a three pronged lightning attack and a green bullet storm that automatically seeks out the closest target. While I fell just short of absolute victory, these green bullets saved me from sending an embarrassing email to PR asking to be sent footage of a better player so I might see all of the available stages. These attacks, I’m told in a supporting email, are unique to Ms. Chalice, but I’m not sure how that works with other power-ups. We also don’t start as Ms. Chalice, but Mugman, then as the announcer says ‘it’s a good day for a swell battle’, or other, less iconic phrases, Ms. Chalice inhabits Mugman’s body and transforms him. Presumably the full game – excuse me, full DLC – has some explanation for why exactly that is.

The Delicious Last Course is a DLC for Cuphead. It is good. That’s sort of it.