Scorn is marketing itself as a rich experience that rises above traditional fare in the shooter genre. It isn’t about burly men and giant explosions, but instead places a morbid focus on grotesque imagery and slow-burning horror designed to unsettle more than thrill.

One of the most recent gameplay trailers has a narrator claim that while Scorn has organic firearms and enemies you will need to dispatch with them throughout the campaign, it is not a shooter. While that’s technically true as it isn’t quite a traditional shooter, it has more than enough hallmarks to call the genre home. Saying otherwise isn’t only a bit needlessly pedantic, it also undermines what the game manages to achieve by holding it up as some artsy fartsy bullshit.

Scorn isn’t especially long, and will clock in at roughly eight hours for the majority of players. It is tightly paced, environmentally distinct, and wants to keep ushering you forward in spite of the temptation to stop and stare at each new grotesque discovery. You don’t even come across a gun until the second hour, and even then you get a gross prodding machine that stabs enemies with a sharp implement instead of blowing them to pieces with a projectile. It feels terrible to use, and requires multiple hits to take out even the most basic of creatures. I tended to swerve conflict altogether if I could, but tight corridors and attacks that are impossible to avoid meant I often had no choice, sacrificing large chunks of health until they dropped dead before me. 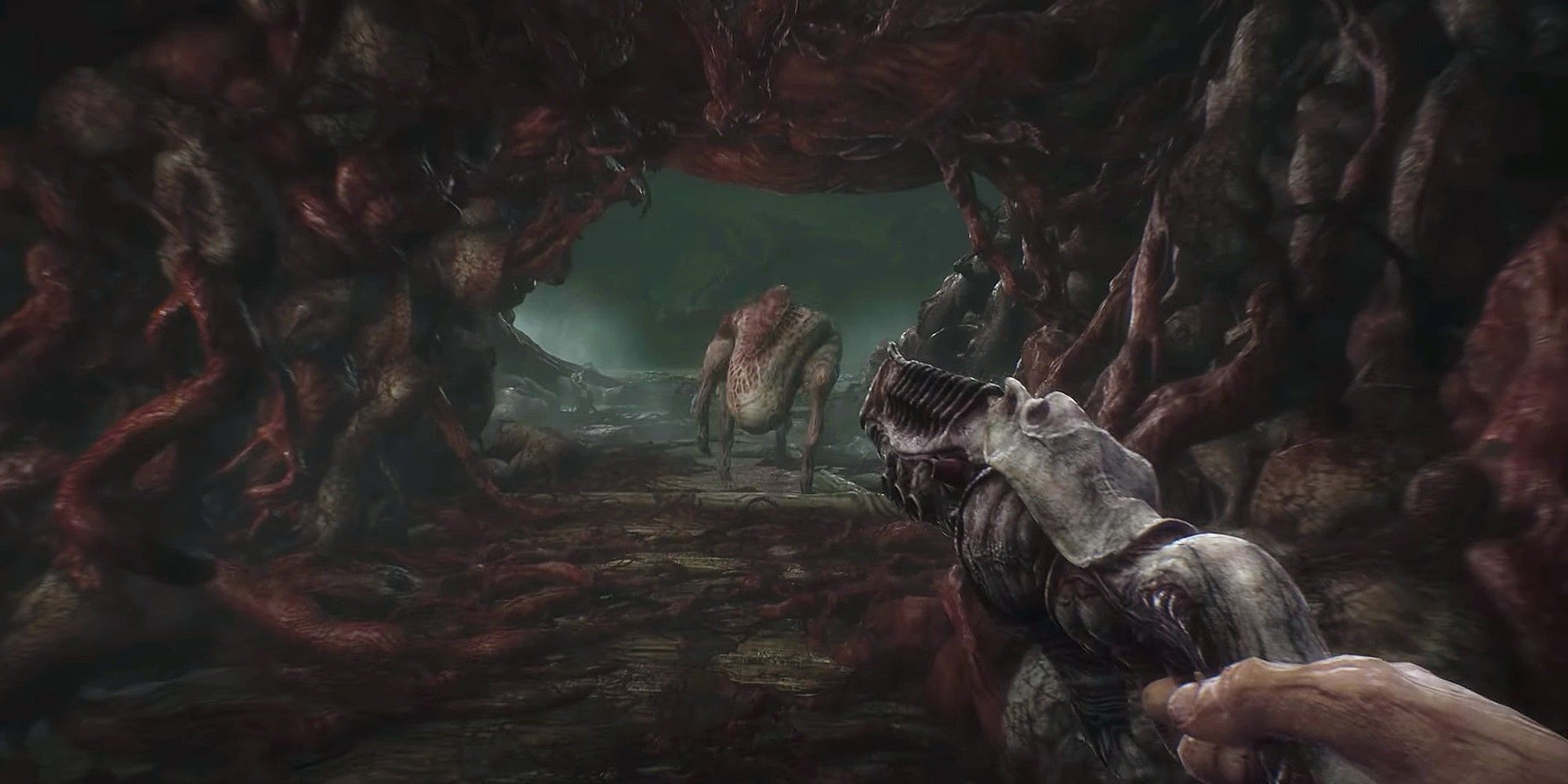 Later levels give you a rifle and a shotgun, or at least parallels these weapons with the conventions we’ve come to expect from them. There are even gross machines conveniently positioned before combat encounters, like the game is almost telling you to stock up before moving forward because shit is about to get real. Fighting was the only recourse, and when that ends up being the case, I have to call it a shooter. Most of your time isn’t spent taking potshots at weird alien parasites, but enough of it is that it tends to get a bit annoying.

Scorn is at its weakest whenever it seeks to gamify itself. It boasts a rich narrative dripping with atmosphere, and its brilliance comes from stumbling across environmental storytelling of your own accord, almost gasping aloud as your mind tries desperately to figure out what brought this place to its knees. When a gun is placed in your hands, and you’re forced to go through the same level again and again in search of a solution, or stare at a weird machine for minutes on end in a bout of trial and error, the mystique of its world is washed away and replaced with frustration. Moments like this are rather rare, but don’t try and hide away its shooter inspirations in your marketing when the finished product more than leans into them.

It takes away from what it does so well, and there’s nothing wrong with a narrative-driven first-person experience like this indulging in a bit of gunplay and keeping its vision intact. It feels like Scorn wants to treat combat as a dirty word, despite the fact it is a present and often core part of the moment-to-moment gameplay. Many enemies will cower in fear of your presence, or you can sprint around them and avoid a scrap altogether, but sometimes that just isn’t possible. We also have the means to fight back, so our agency as a passerby in this universe looking for a means of escape is morphed into a twisted power fantasy.