Games often allude to the real world in many ways – the examples that will immediately come to mind are probably Grand Theft Auto, Fallout, Spec Ops: The Line, or Papers, Please. These games are satirical to their core, offering direct parallels to real-world events and situations, and forcing you to rethink your views on those topics by offering new perspectives. Some people still come out of them thinking, “I love killing prostitutes,” or, “cool nuclear apocalypse!” but applying a little critical thinking goes a long way.

Other games are incidentally satirical, or show events that are easily relatable to many modern situations. It’s easy for many people to relate to tales of oppression, power struggles that have a knock-on effect on the ordinary masses, and the other hurdles that game characters have to overcome. After all, the developers who make games will use their own experiences or the current political climate to influence their stories, and they want players to be able to relate to them, whether they’re about aliens or dragons or plain old modern day humans.

That’s where Dragon Age comes in. I’ve been playing the series for the first time, and I’m really enjoying these BioWare RPGs. From backstabbing friends who deserved better to forgotten deadly sins, the depth of the writing is quickly catapulting it to being one of my favourite game series. While the persecution of Mages, refugees from Ferelden, and ostracisation of Qunari are comparable to many real-life situations, they don’t seem like specific parallels to real-life events. The real satire in the series came when I met Captain Jeven in Dragon Age 2. 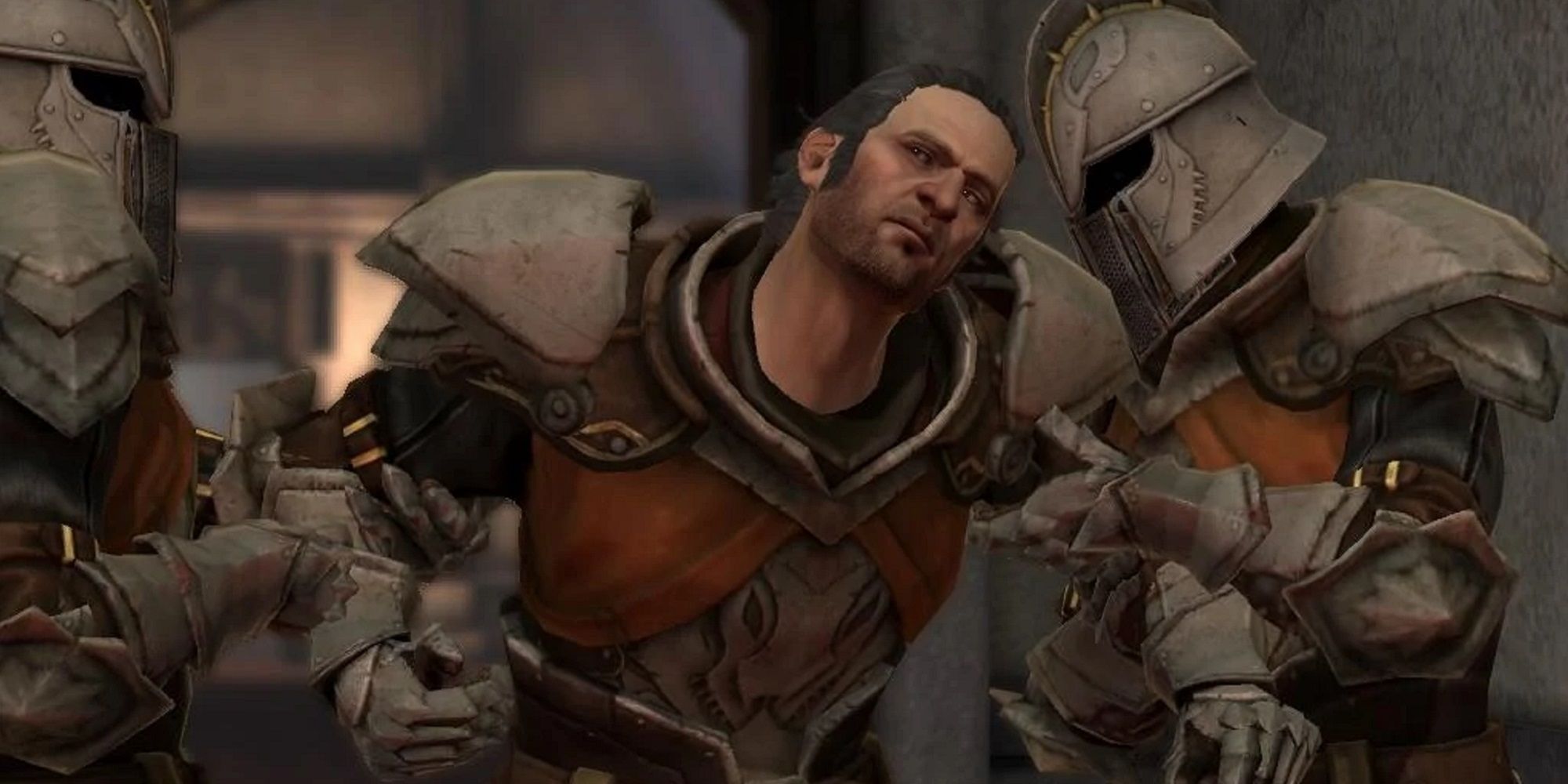 Jeven is the Captain of the Kirkwall City Guard, at least until Hawke and Aveline find out he’s in the pocket of Big Coterie, one of Kirkwall’s organised crime gangs. You oust him from his position as a part of Aveline’s companion missions, stopping him from leaking key city account information to the gang in the process. He’s not happy about being arrested, but you’re more than justified in your actions, and Aveline takes his place as Captain.

While you can point fingers at the likes of Donald Trump, Boris Johnson, and Cressida Dick, corrupt politicians and law enforcement officials are no rare thing. However, it’s later in the game that Jeven’s actions become more erratic, and are a strangely prescient satire of modern day grifter culture from a game released more than a decade ago.

During the Favor and Fault mission, you encounter Jeven again. He’s reinvented himself as an insurgent, a man holding truth to power in a city overrun by villainous Ferelden refugees, yourself among them. It’s a tale as old as time, and I could reel off names of real-life men who reinvent themselves after being ‘canceled’, a term that is often synonymous with ‘facing the repercussions for your abhorrent actions’. Just this week alone Andrew Tate was banned from Facebook and TikTok for misogynistic rants and comments. In my playthrough, none of the guards had aligned themselves with Jeven, but he can turn the tide against Aveline with his racist rants, too. 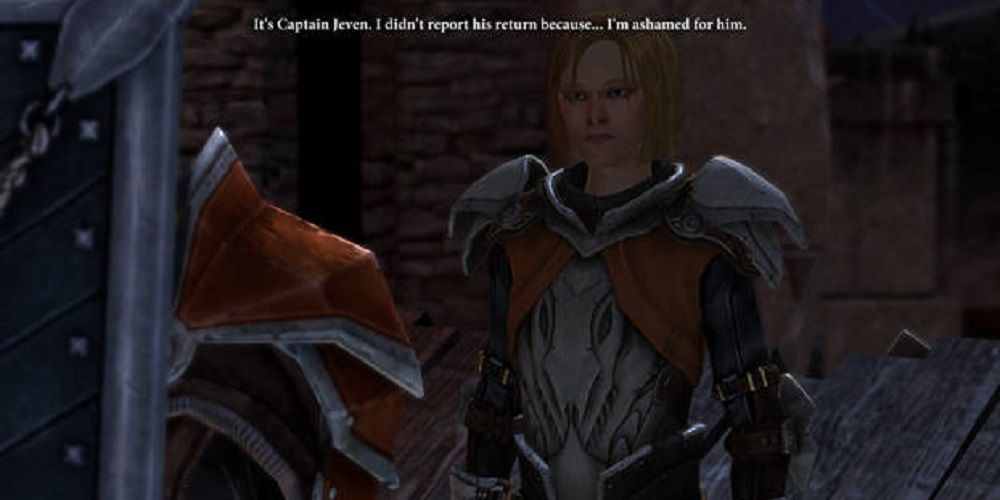 Jeven is a man out for himself. He wants revenge on you and Aveline for the loss of his cushty captain job, and quickly turns to racism and a ‘cancel culture’ rhetoric in order to get some ordinary folks onside. Despite this, his fighting party is mostly made up of mercenaries, people who he’s paid to be by his side. Not even the ordinary people of Kirkwall believe his ravings – and a lot of them already resent the Ferelden refugees flooding into their city to escape the Blight. He’s practically touting the tired old racist mantra that Fereldens are coming over to Kirkwall and taking our bloody jobs, just in a more olde timey manner.

After his ploys to unseat Aveline through forged complaints fall through, Jeven turns to violence. Much like the right-wing grifters who plague the real world, he drags his misguided followers into the fray and then leaves them to do the fighting for him. It could be coincidence, but his Assassin abilities make him physically disappear from the battlefield as soon as Hawke, Aveline, and company charge into the fray in Darktown. I’m not knocking any Rogue enjoyers among us, but this is a prime example of the cowardly tactics employed by these grifter types. Kick up a fuss and spread misinformation to build a following, and then take off the moment shit hits the fan. All he needed was a line proclaiming he’s been cancelled and he’d be the perfect representation of a reactionary YouTuber who got suspended from Twitter for saying slurs in 2022.

It feels like grifter culture is a recent phenomenon, but these people have always been there. Whether they’re politicians like Nigel Farage or people who position themselves as regular working class joes, you can bet your bottom dollar they won’t be on the front line in the same way they urge their supporters to be. Jeven escapes from the fray and leaves his mercenaries to die, before coming at you with vicious backstabs when he has nowhere else to run. Part of this is just utilising the Assassin skillset, but you can’t deny there are parallels there, coincidental as they may be. 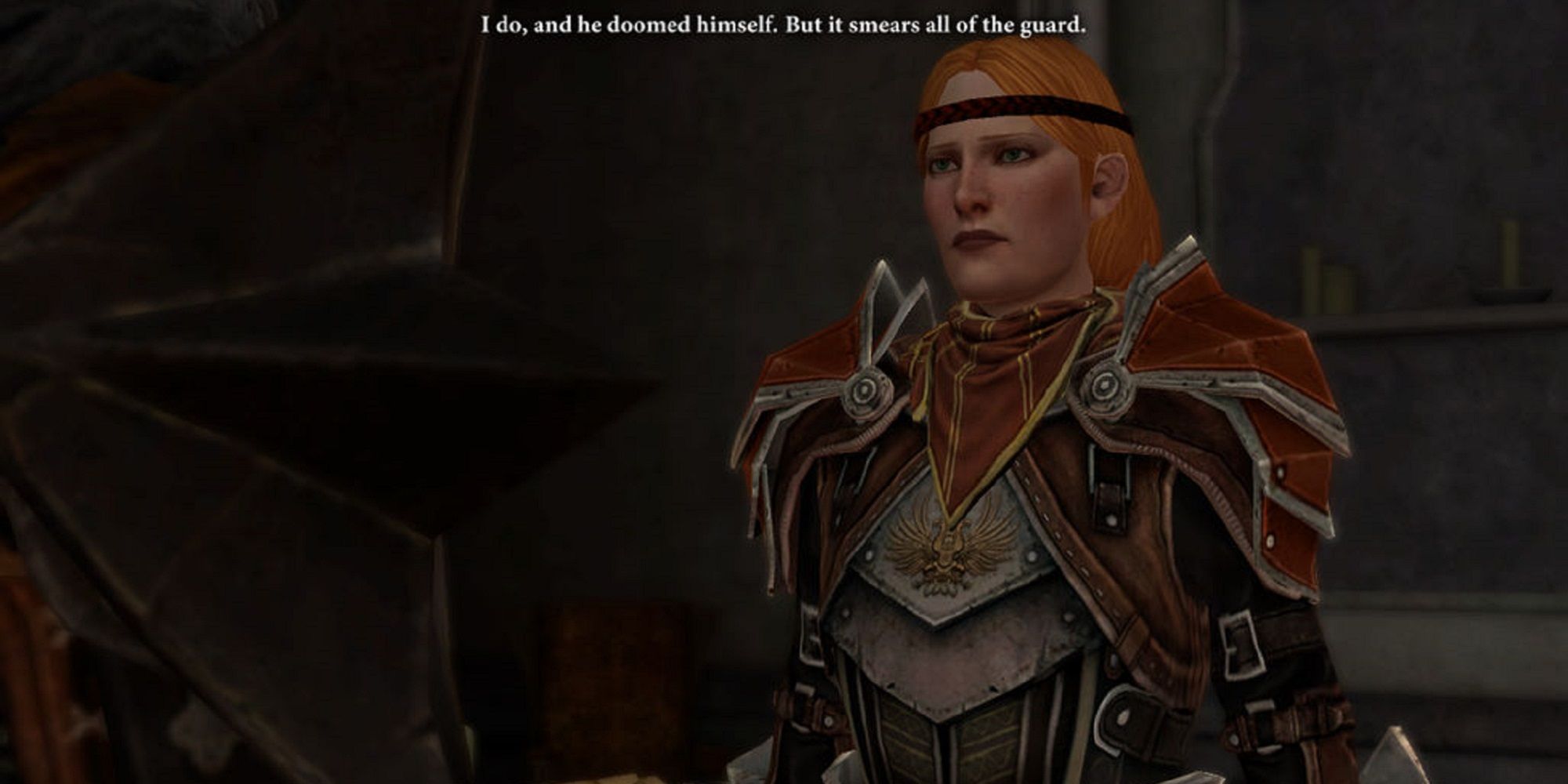 Is BioWare some kind of modern prophet, predicting the rise of racist grifters? Unfortunately not. They’ve always been around, they’ve just been emboldened by right-wing governments progressively leaning further and further to the right, and pushed towards our eyeballs by social media algorithms that reward any interaction, positive or negative. But Jeven’s character arc has such clear parallels to the modern day because the writers captured a small portion of the population with precision.

The characters are what makes Dragon Age so timeless. I mostly remember party members who I spent the most time with and built relationships with, but NPCs like Jeven, Hespith, and Connor stick with you too. With Jeven in particular, BioWare captured a specific kind of man that persists in today’s society, and let us kick his racist arse.