This is an early-game quest you get by speaking to Dodger near the bar inside the Bazaar. You're tasked with finding an unreliable supplier in the great city. Completing side quests like this will help you memorize locations better.

The world in Dying Light 2 is vast yet many buildings end up looking the same. This can cause confusion when you're traveling on your own in search of extra loot. Side quests will familiarize you with specific locations and may lead you to important items like Inhibitors. 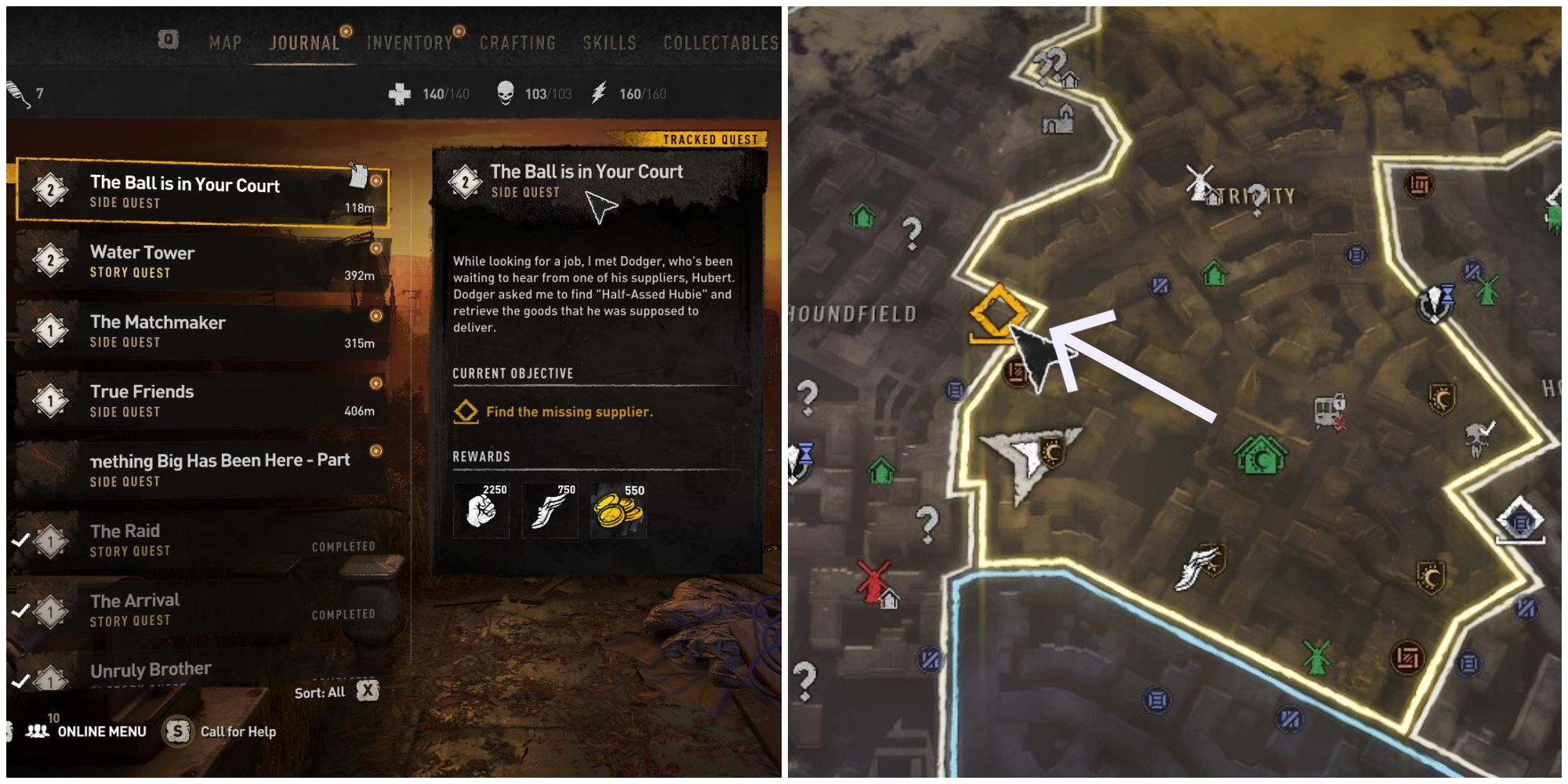 Hubert's location is directly North-West of the Bazaar. In broad daylight, you should have no problem arriving at your destination. The problem arises when you try to get inside the building. As with plenty of other quests, it can be hard to figure out how to enter buildings the right way. 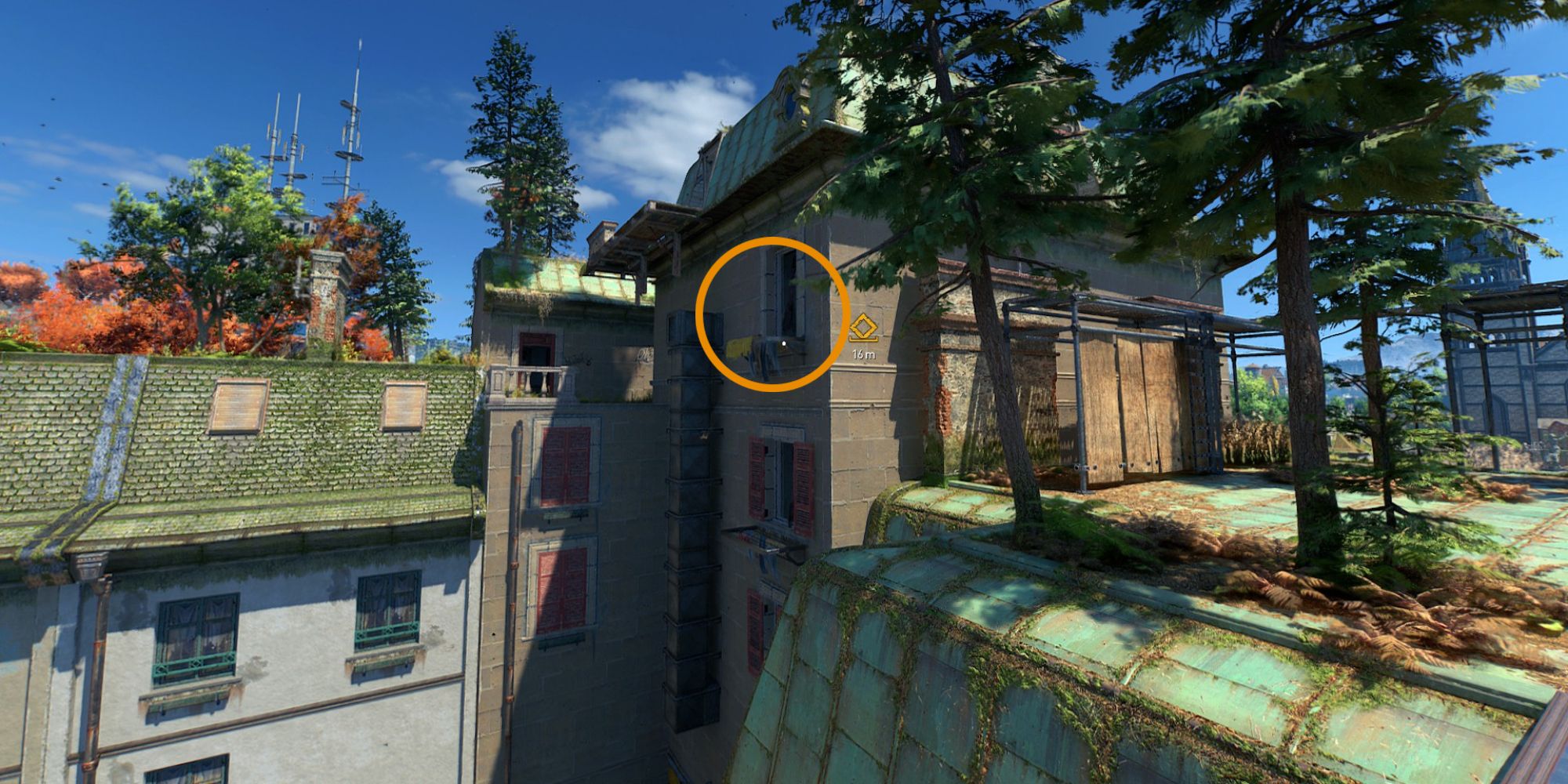 There are around three different openings here. Firstly, there is a side entrance that leads to a bunch of zombies inside a room. On the side of the building are two windows you can jump into. The lower window will lead to the inside of the building and zombies. The highest window, with a yellow cloth hanging from it, will lead to Hubert. Crouch and enter through a hole in the wall to your left to enter Hubert's safe base. There will be a yellow pipe you can climb up, leading you to a UV light safe zone in the wall.

You can try to traverse through the zombie-ridden building and eventually find another path to Hubert, but this is the easiest and safest way. 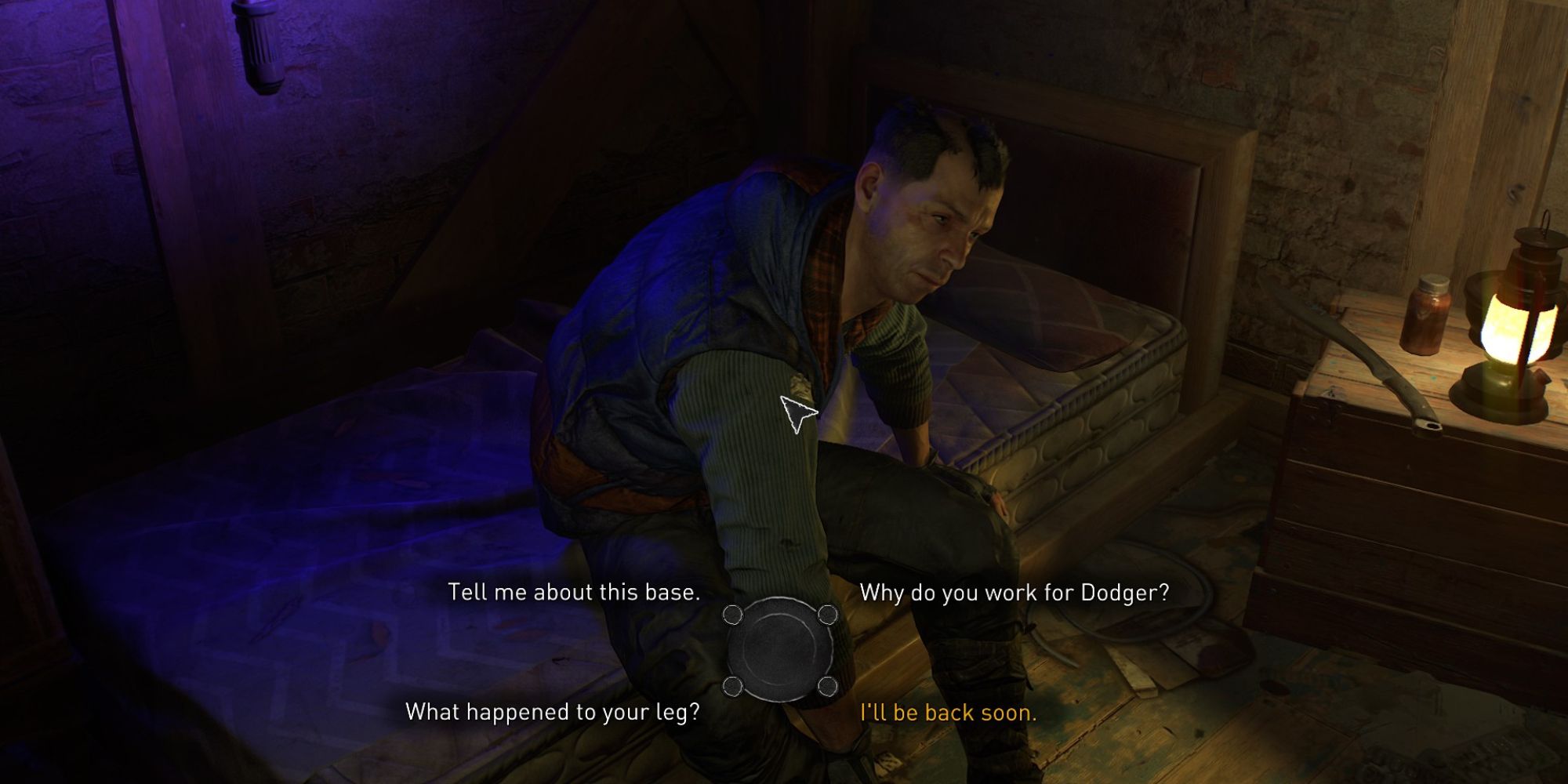 You can ask Hubert multiple questions to get an understanding of what his situation is. If he's really innocent in all this or if he's a thief trying to scam Dodger. No matter what dialogue option you choose here, you must go and retrieve the supplies for Hubert and Dodger. 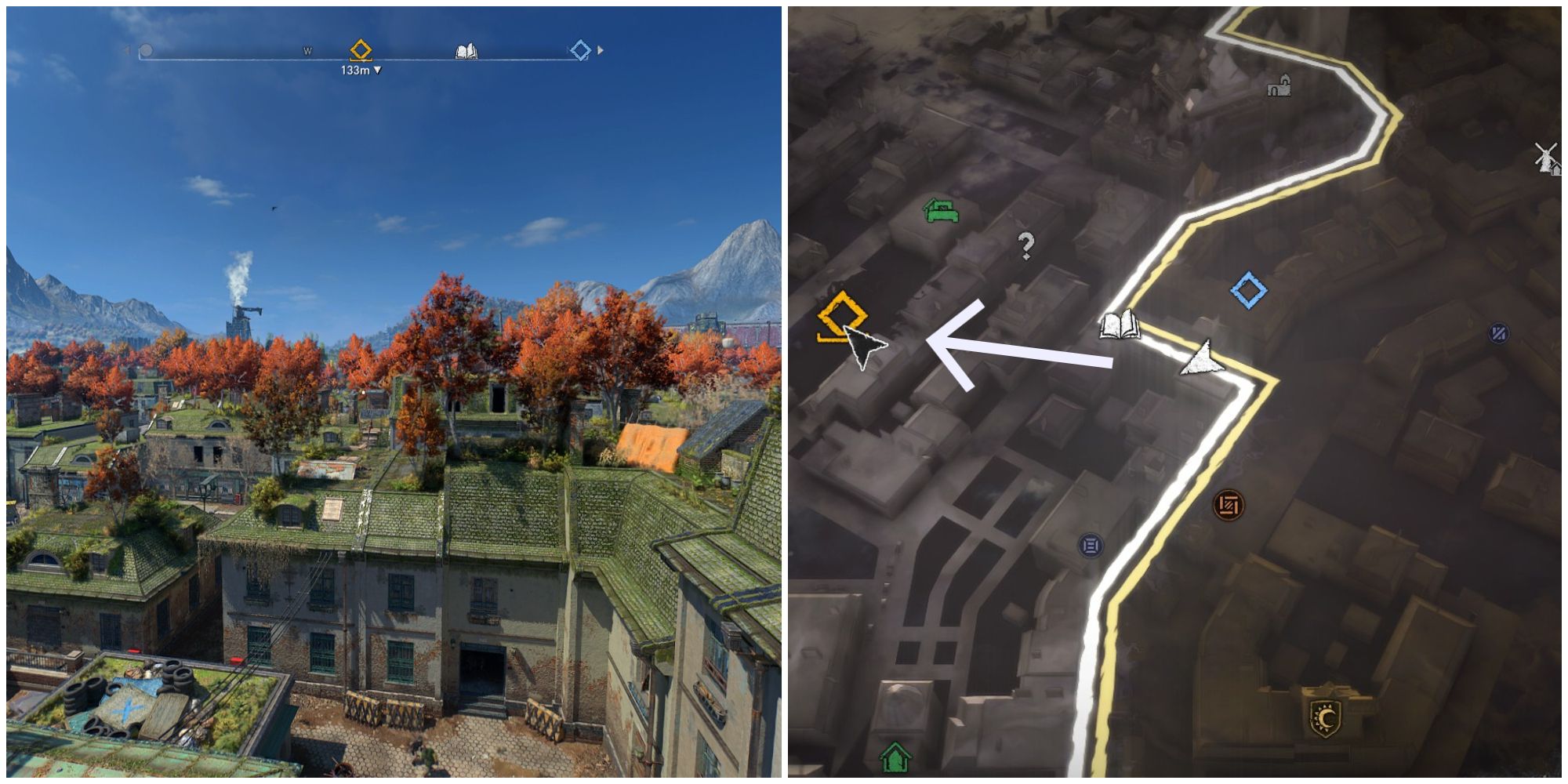 By exiting through the window, your next objective is in the direction you're facing. You can easily follow the rooftops here to reach the car park. 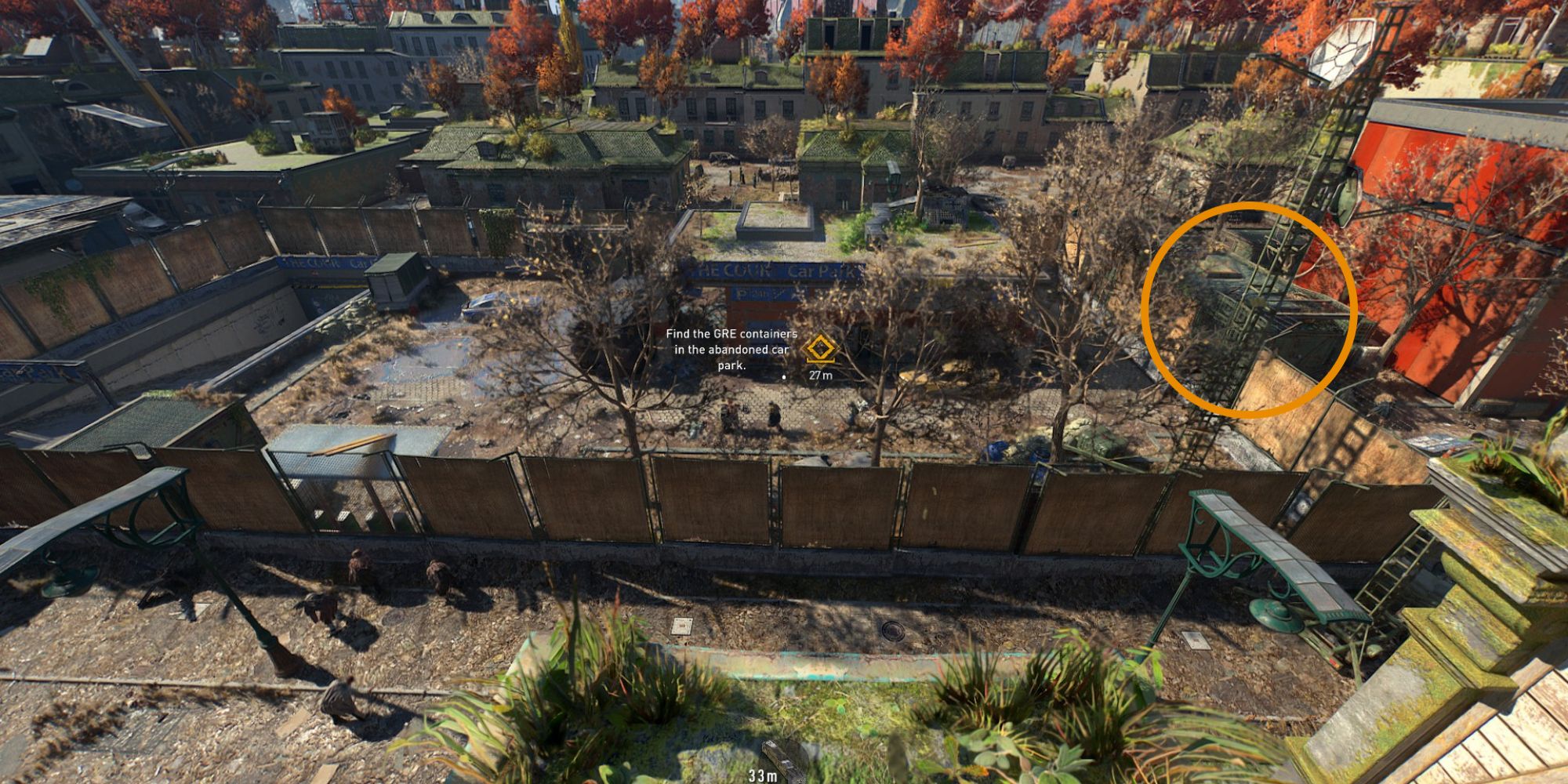 Before entering the area, notice that there is a military container to the right of the car park, against the fence to the right. There is an Inhibitor and a medium lockpick chest inside. Simply jump on top of the cargo and open the small door to jump inside. Now enter the car park. There will be around four level two zombies in front of the doors, but nothing you can't handle. 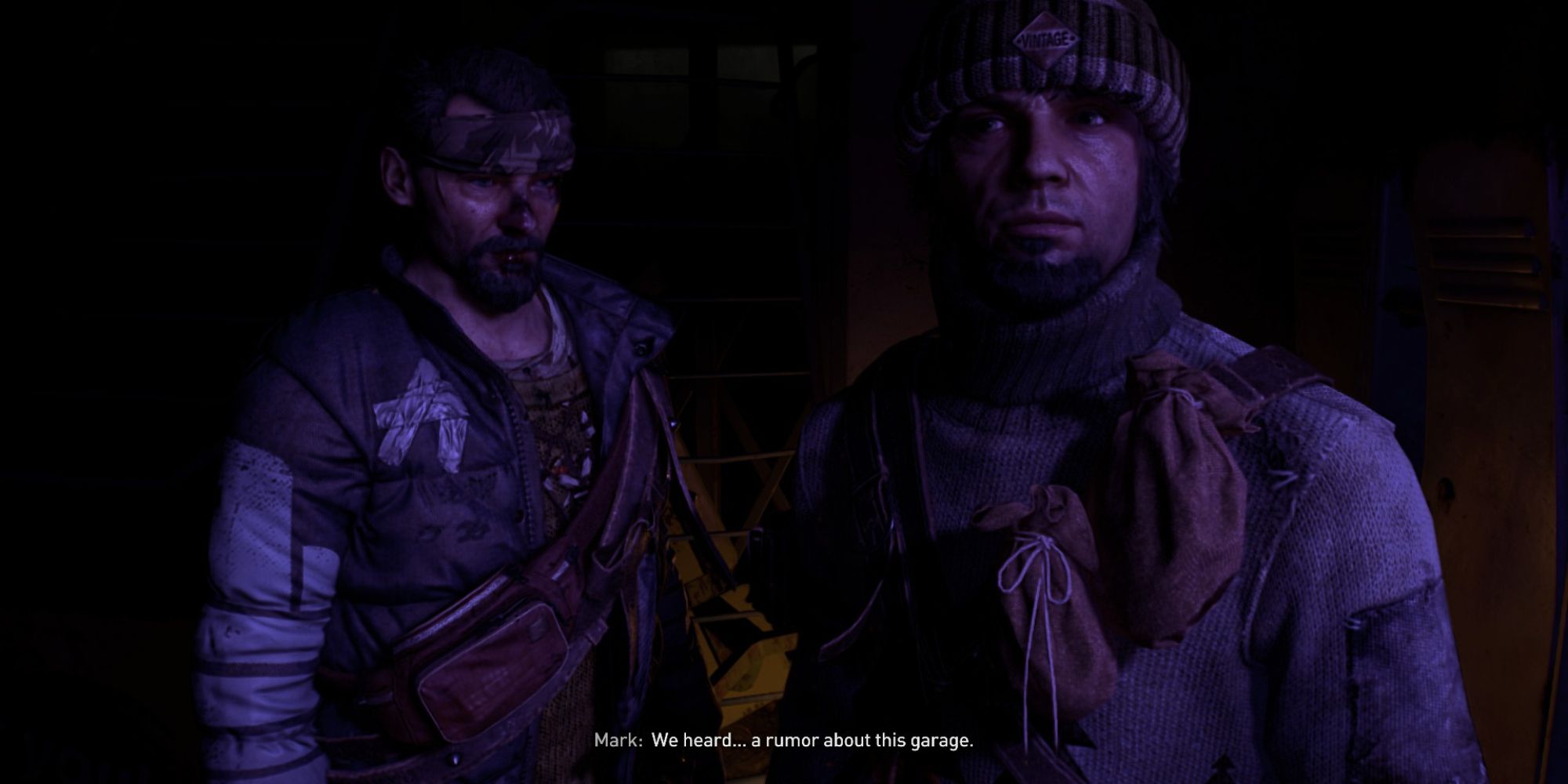 You'll bump into some guys near UV lights that will warn you about the dangers deeper inside the building. Continue past them. There's an empty elevator shaft you must go down. Jump onto the yellow ladder to get down safely. 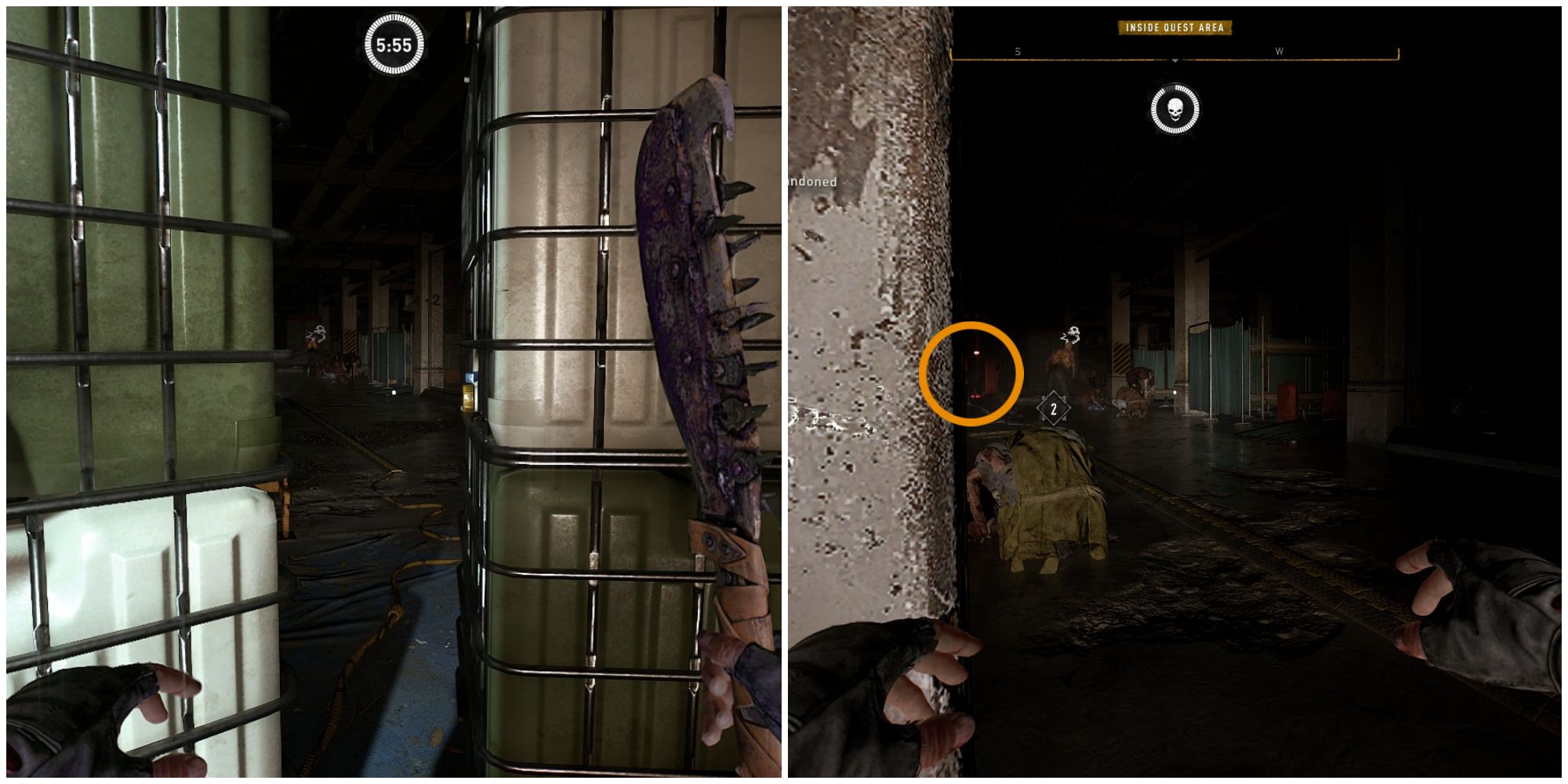 Next, follow the general path until you get to some green and white boxes that you can slither through. There are Howlers and other zombies afoot. Your goal is to make it to the doorway that has a red light above it. You can either make a run for it, take your time, or kill the zombies one by one.

Even if a crouching zombie's back is to you, the closer you are to one, the higher its awareness will become until it notices you. Howlers constantly patrol and act as alarms, making traversing through tight areas even harder.

There is a cement block next to a crouching zombie, just before the door and Howler. You can hide behind this block and decide your next move. For example, you can wait for the Howler to walk back to the doorway and then sneak attack the zombie in front of you. Then, return to the cement block. You can then wait for the Howler to come to you and then turn back around, so you can sneak attack him.

With the Howler gone this way, your nerves can dissipate as you slowly deal with the lesser zombies in the area. Again, it's possible to simply run past them all and into the doorway. Past the doorway is some turns leading to a staircase. Running fast enough, they won't be able to catch you and will quickly lose you.

Inside The Car Park 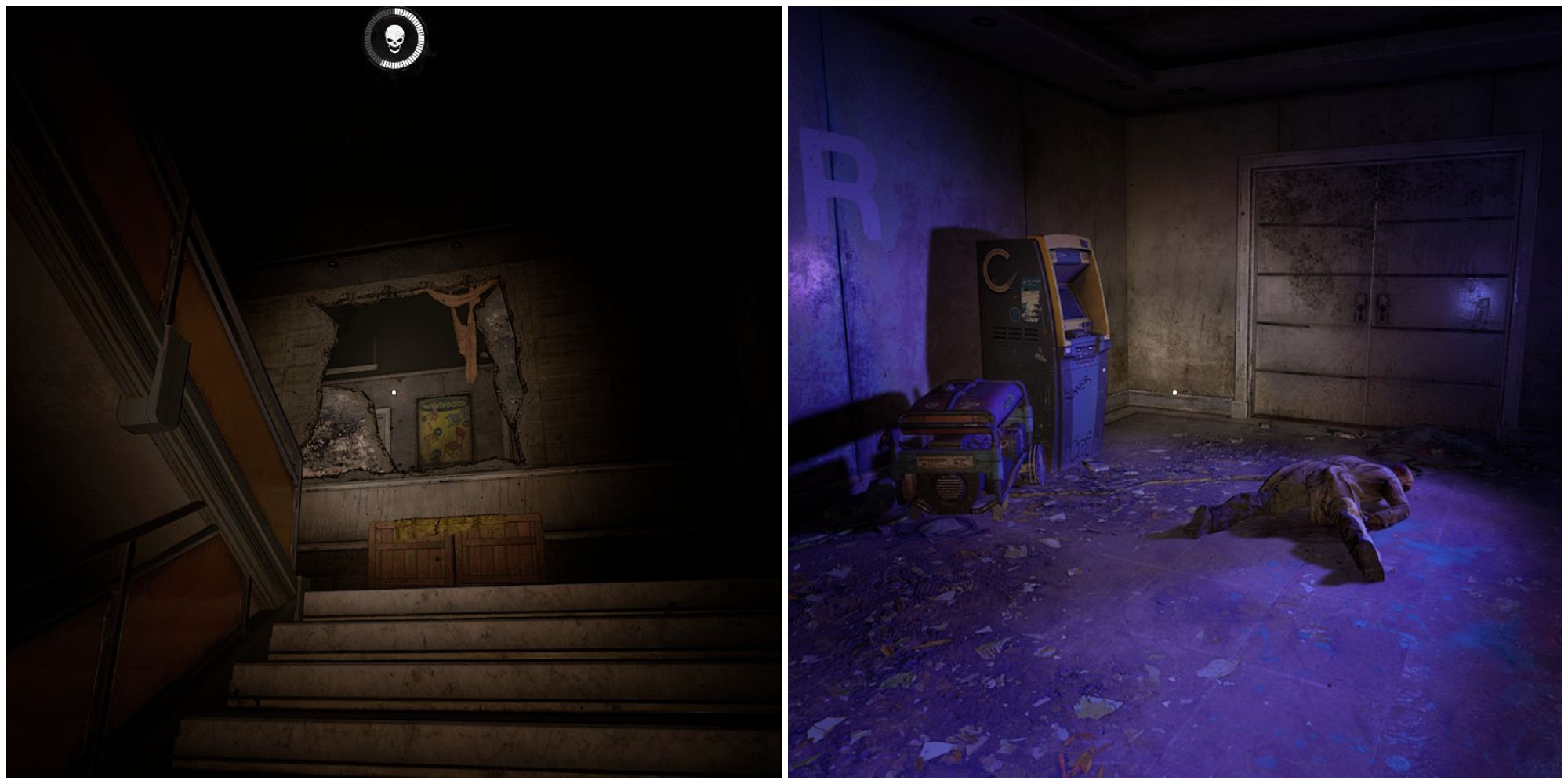 Up the stairs, you'll have to jump through the huge hole in the wall. There is no walking up the rest of the stairs. The hole leads to a bathroom and a long hall to the right. At the end of this hall is a set of doors you can enter. You'll find a generator against the wall that you can interact with and startup.

This provides you with a safe zone full of UV light. Here, you're safe from zombies if some start to chase you, and you can think about what to do next.

There's only one way out, and it's through some doors to the left of where you entered. There will be a yellow car in front of you and many zombies. 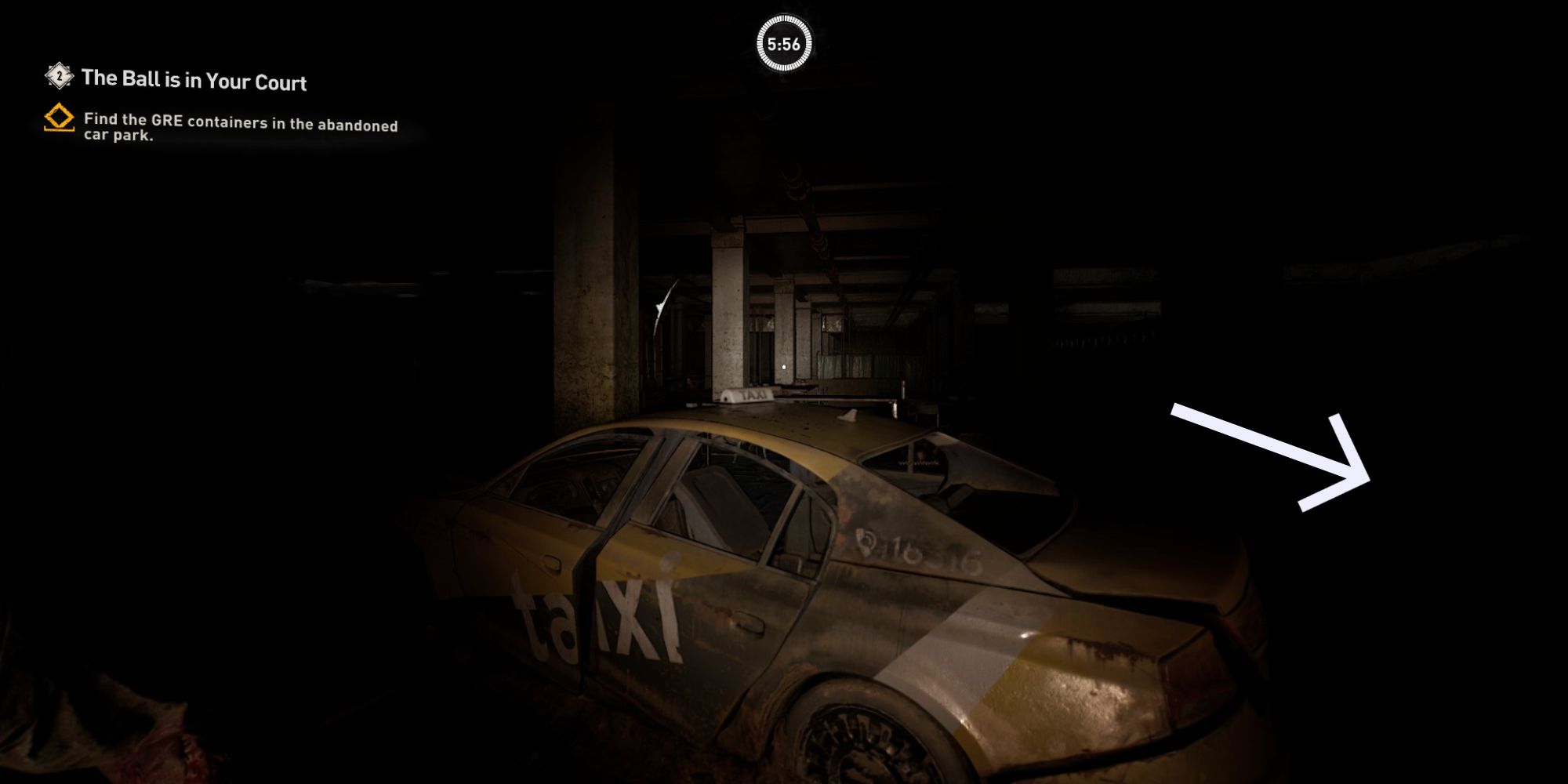 It's very hard to see anything in this area. You can try to sneak around here; there are some minor loot and an easy lockpick chest. What you actually have to do, though, is jump down from this floor level.

To your right is a balcony. You're on the second floor. Below you are plenty of zombies but also a fenced-off area with a generator and the GRE containers you need. You can run for your life here since it's in complete darkness anyway.

If you've crafted throwable UV lights, try throwing them off the ledge to the right of the cars instead.

Without a light source, you're going to have to trust simply running forward until you meet the fence. Again, from leaving your generator and entering the next area, turn right and jump off the ledge. Sprint straight until you bump into fencing. Either follow the fence to the left to find the opening or find any way to jump over the fence.

In the center of this area is a generator you can start. You'll be safe from the zombies here. 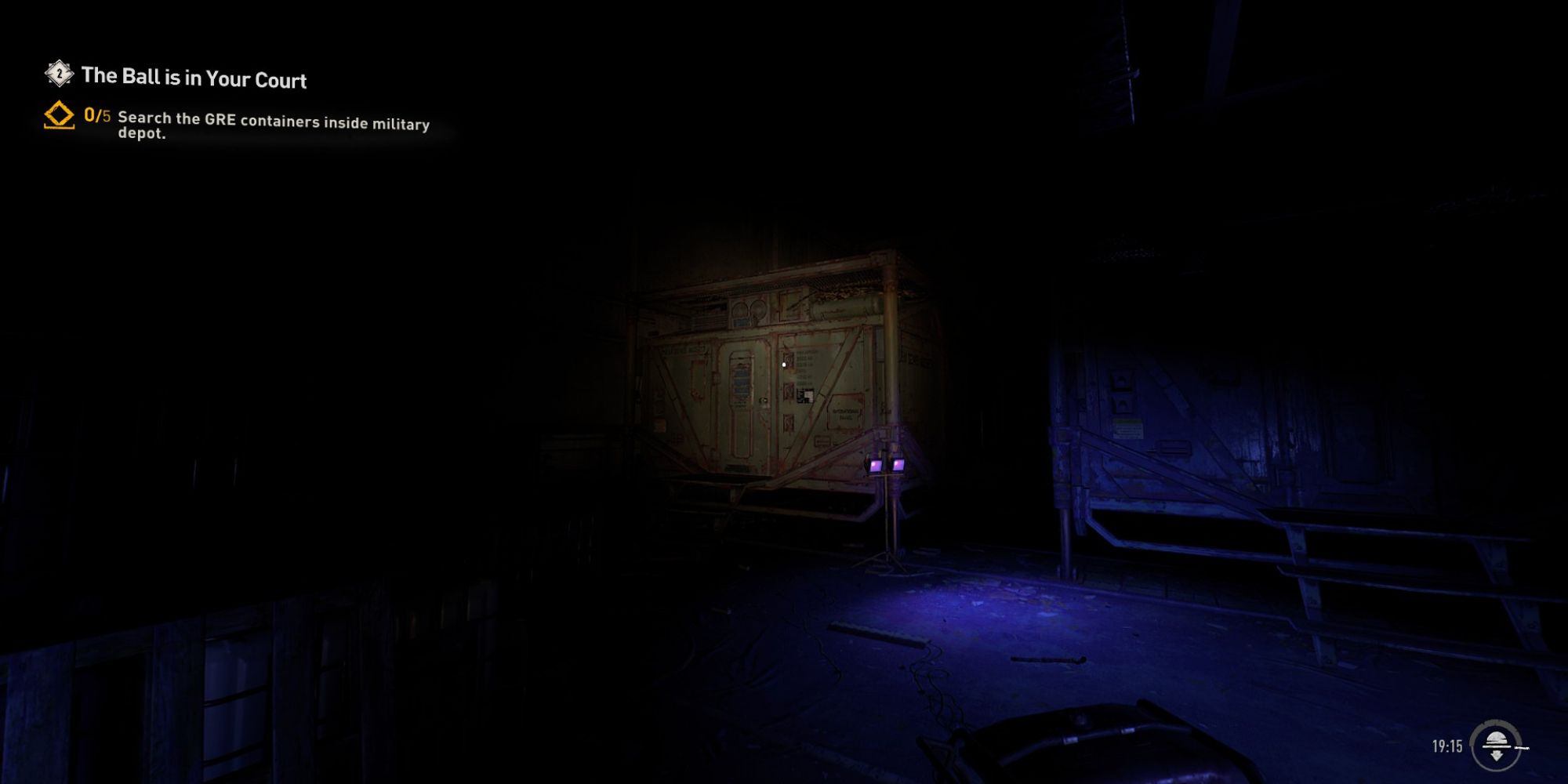 There are two military cargo holders in front of the generator here. You can enter the first one on the left with your key. There will be some loot in here, but most importantly make sure to pick up important loot that classifies as GRE containers for the quest. 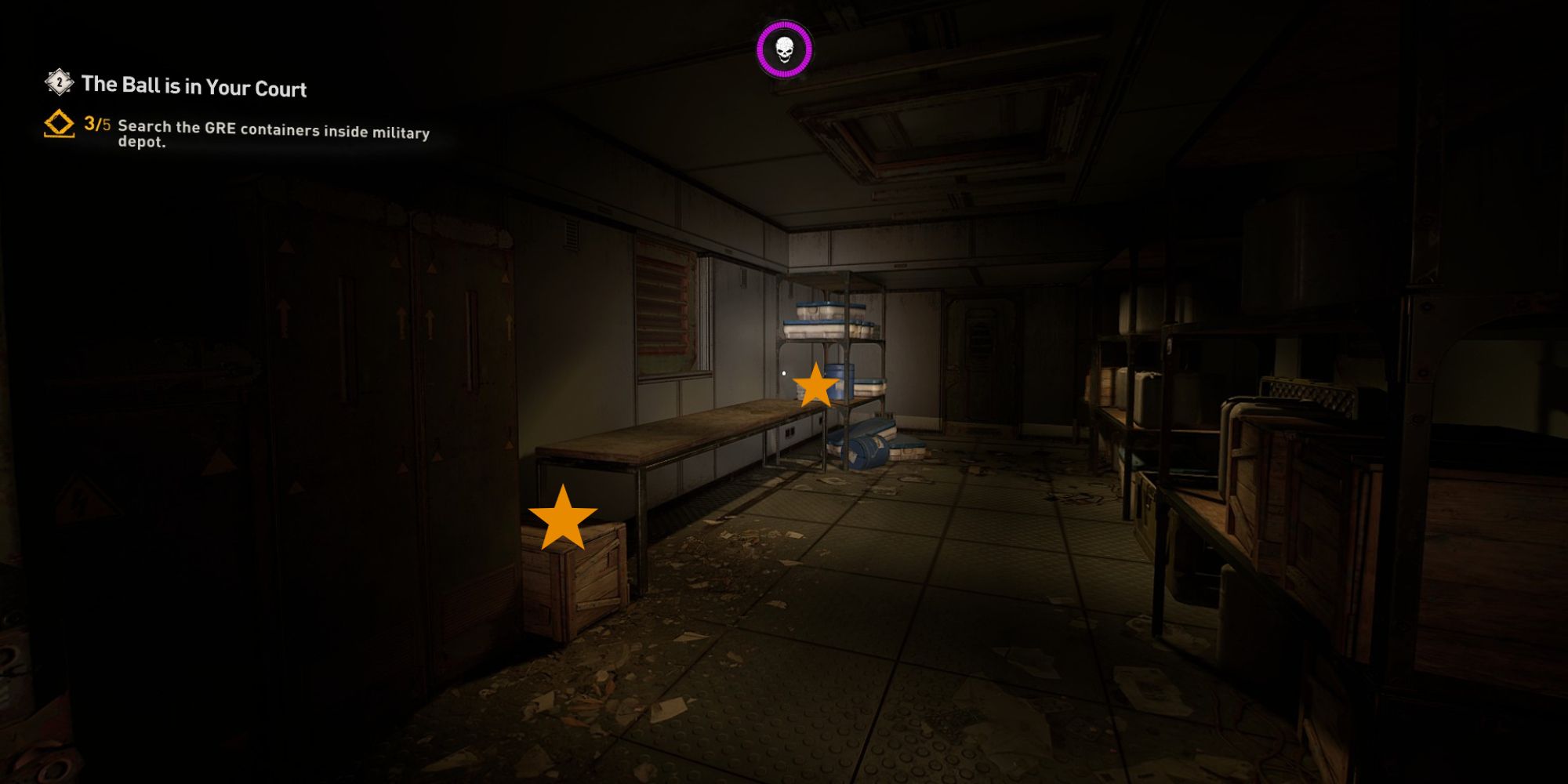 The GRE loot will be sitting next to the table as you enter and in a box on the shelf at the other end of the table. See the photo above for the location. There will also be a hard lockpick in this room as well as loot on the table and in the lockers. 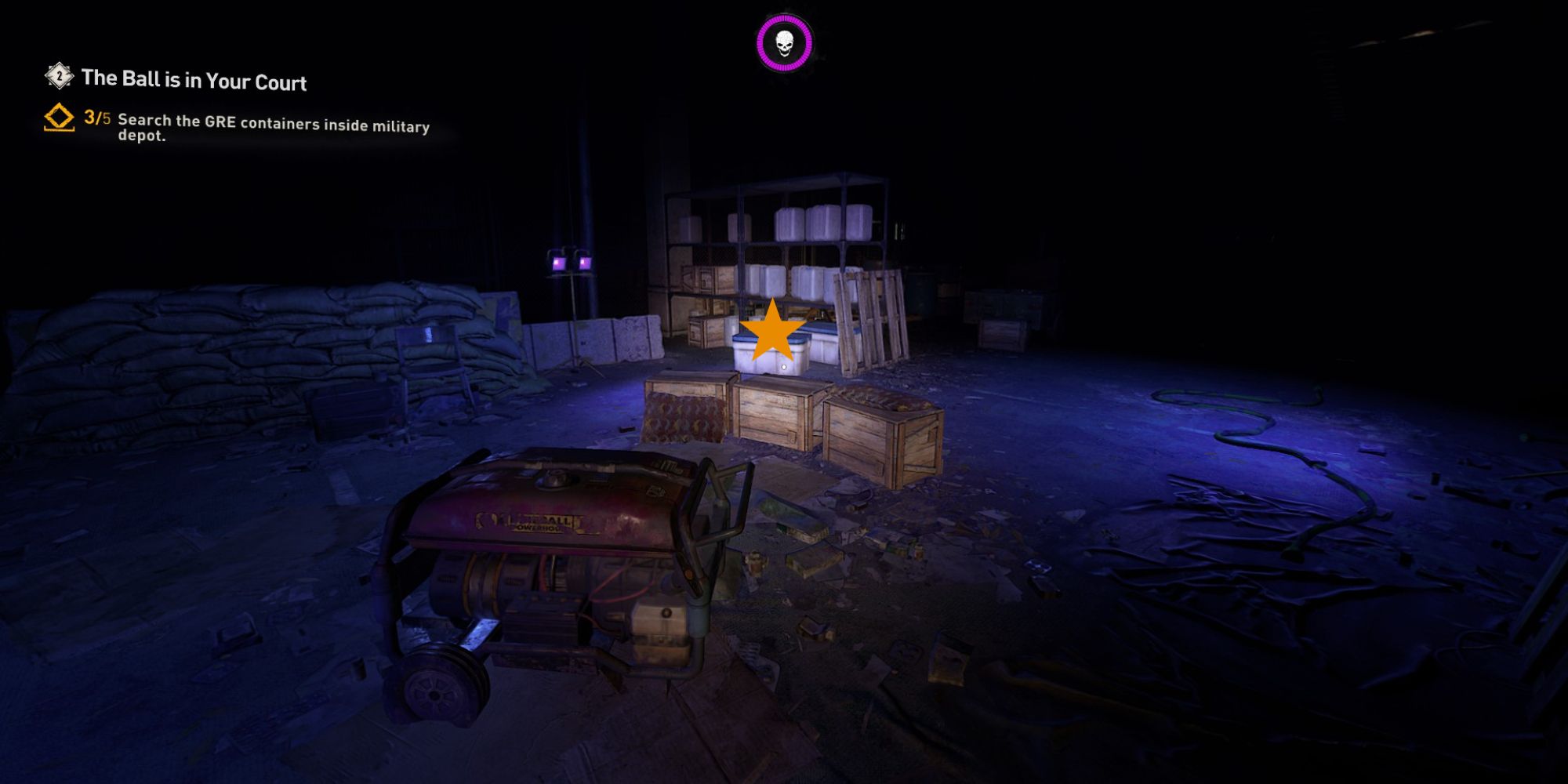 Exit the container. In front of the UV light generator is another box that counts as GRE container loot for the quest. It will be on top of the blue and white box in front of the shelves. 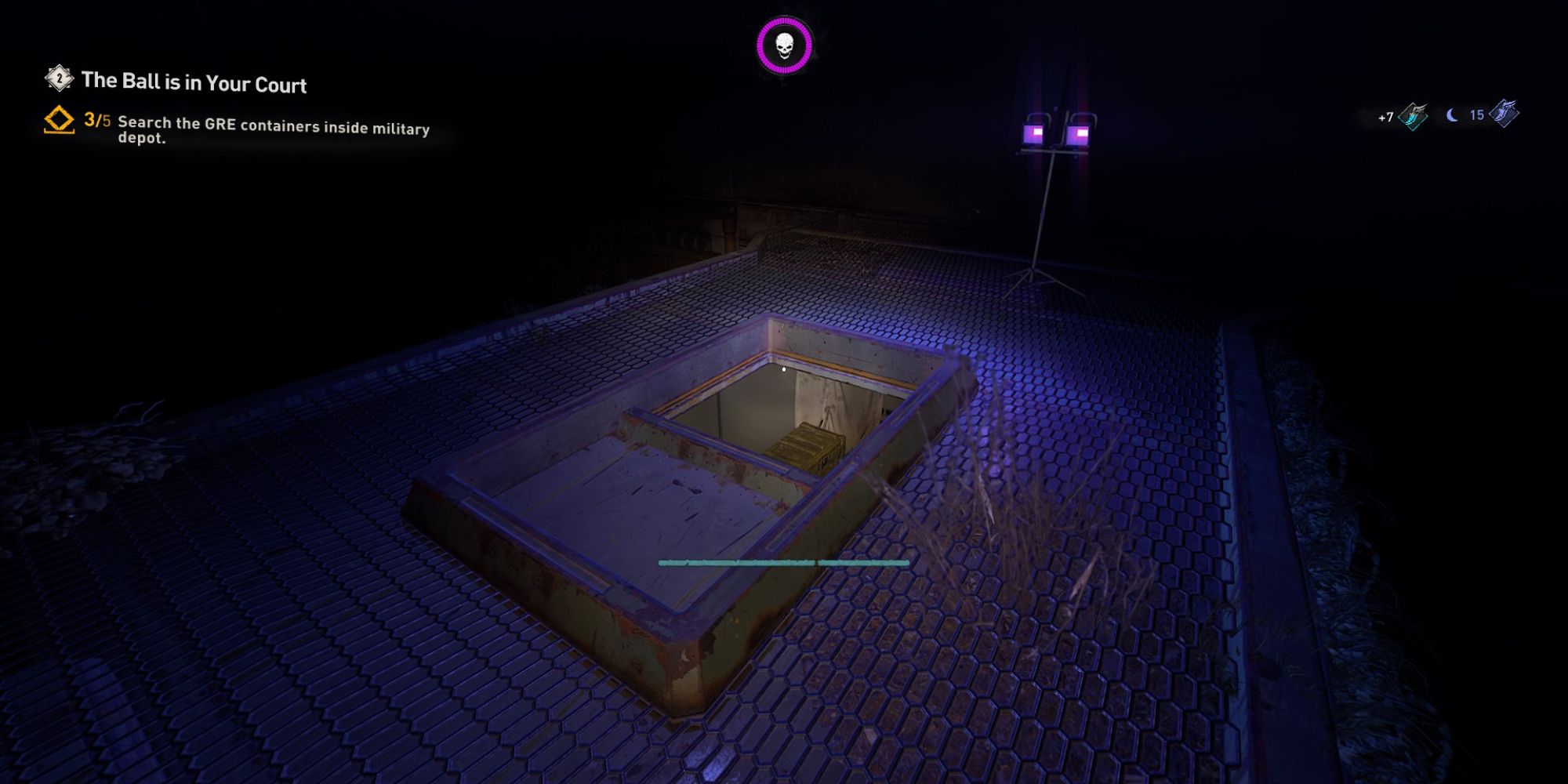 The last piece of quest loot is in the second GRE container. You can't enter it from the front door. Instead, jump on top of the container and enter through the roof. Inside will be an easy lockpick chest that counts for the quest. Everything else in the room is not needed for the quest. You should now have everything you need. 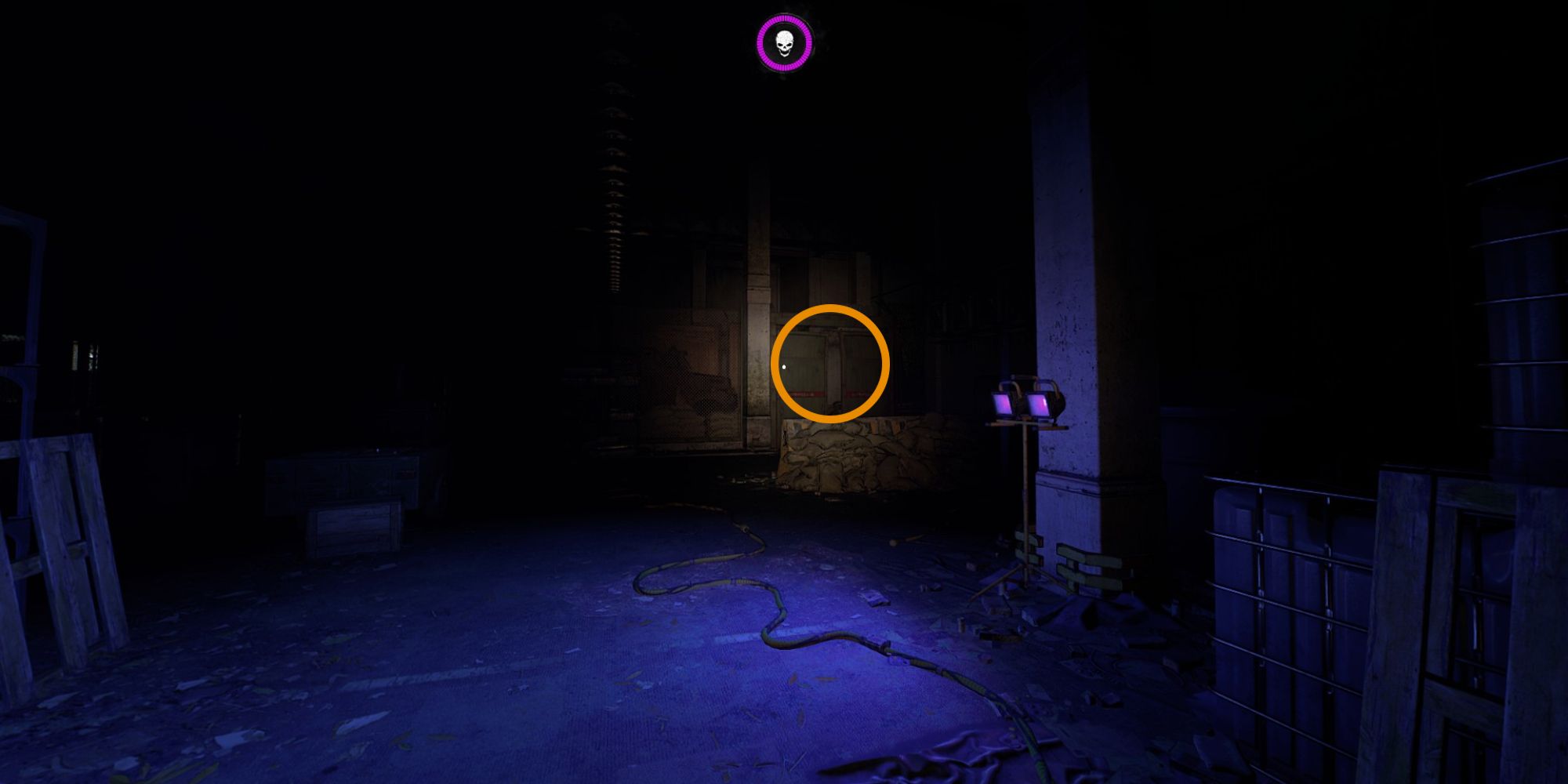 To exit this area, turn back to the generator. Notice that there are large doors at the other end of this fenced-in location (see photo above). You can exit through here. Either head left and move the wood blocking your path back to the beginning, or jump on and over the truck in front of you.

You'll be back to the green and white boxes. Squeeze through them and go back up the elevator shaft 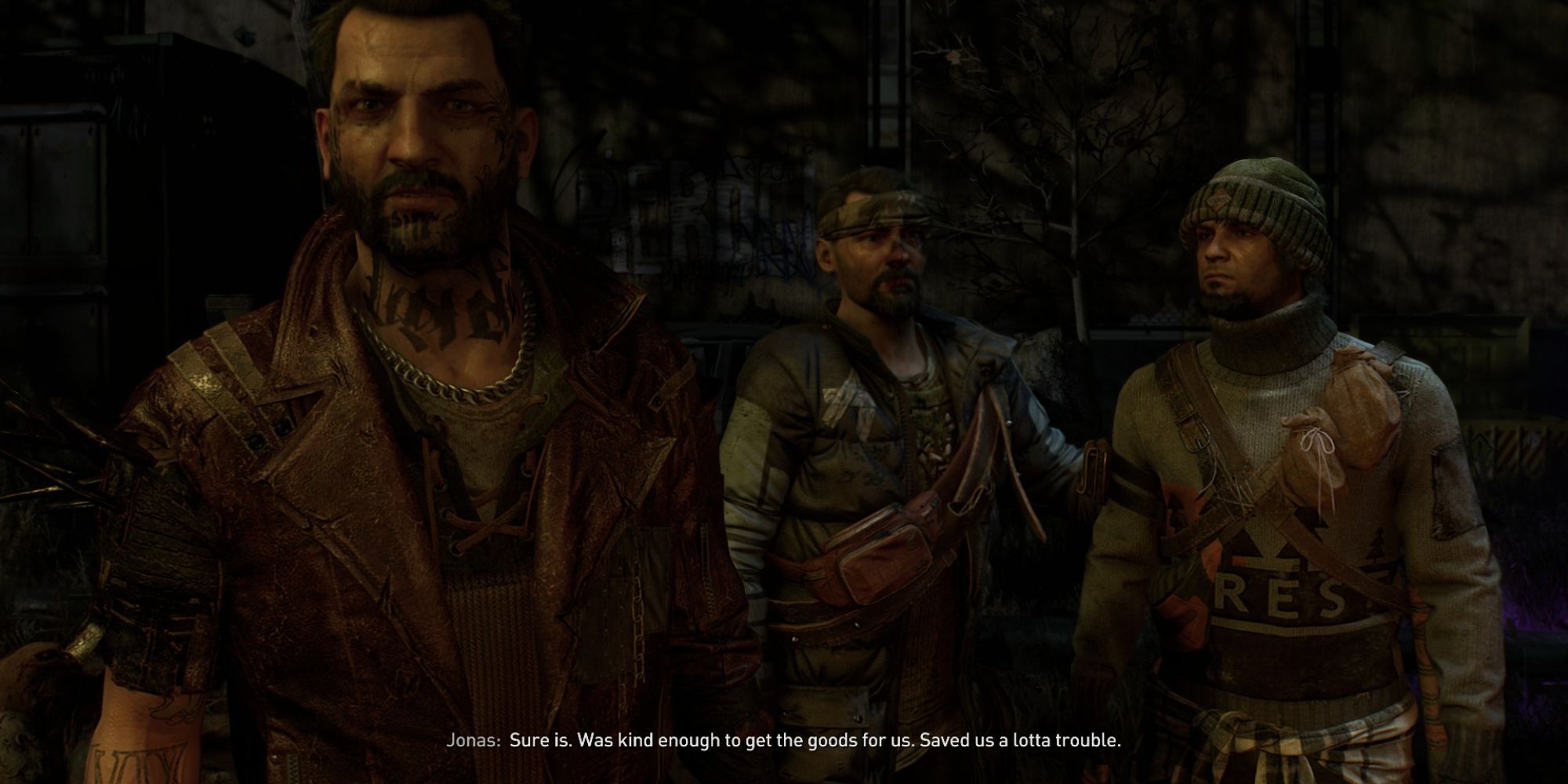 Upon exiting the car park you'll be met with some foul characters. The two guys you saw before and a tougher-looking guy. They meant to fool you and deal with Hubert. No matter what you say to them, they will become aggressive and try to kill you. They won't want to split the goods.

There will be around five of them versus yourself. Try to craft AOE items like Molotovs and grenades, if you can. There are a lot of places to jump up onto or hide behind if you need a breather while fighting them.

After defeating the enemies, you must return to Hubert and update him on the situation. He admits that he planned to keep the loot for himself. He will feel guilty about what he planned to do and change his mind, telling you to just give the loot to Dodger as intended. There's no other way for this exchange to go. Return to the Bazaar to find Dodger.

Update Dodger At The Bazaar 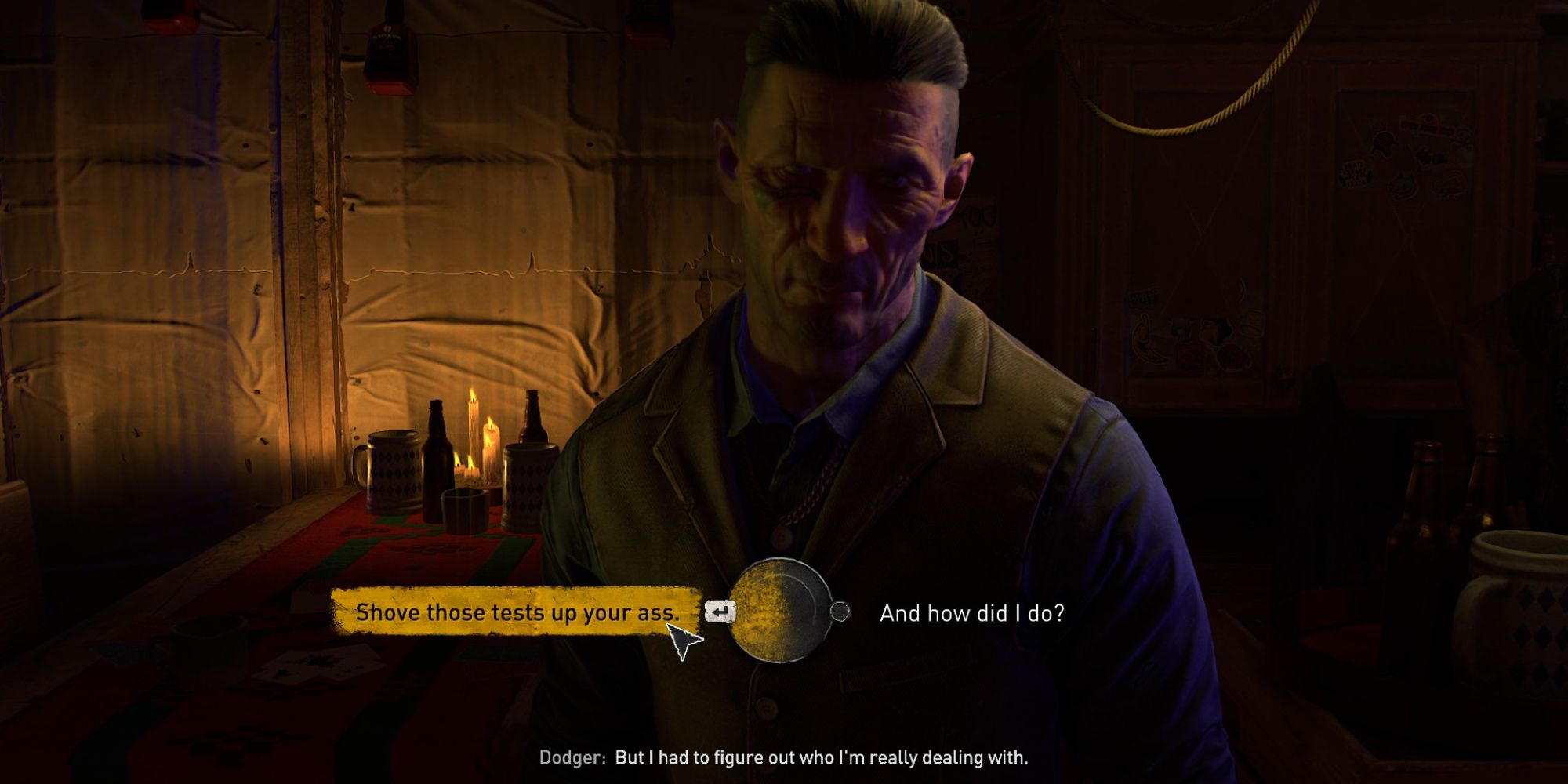 Dodger will be near the bar. Start a dialogue with him to give him everything you've found.

You can choose to rat Hubert out, but either way, you'll be surprised to learn that the men who tried to jump you at the car park work for Dodger. The outcome becomes the same. Aiden is upset at them and Dodger declares business is business. Aiden ends up detesting working for Dodger and you get your quest rewards.