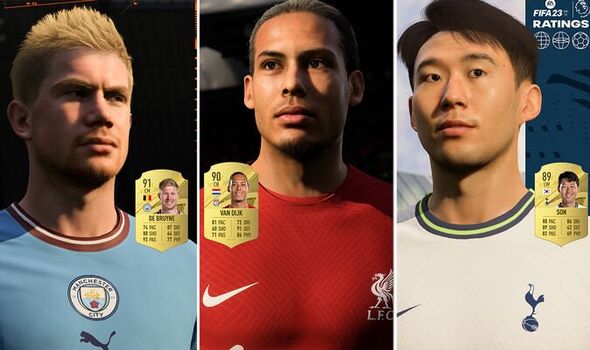 As we close in on the release of FIFA 23, EA Sports has revealed the top 25 Premier League players based on in-game ratings. Unsuprisingly, Manchester City, Liverpool and Chelsea players dominate the list, although Manchester United and Tottenham Hotspur also make an appearance or two. At the very top of the list is Manchester City’s midfield maestro Kevin De Bruyne, who scores 91 overall in FIFA 23.

FIFA 23 is the final EA footie game to have the FIFA name on it, and it’s going to bow out in style with a jam-packed release that features crossplay, two World Cup modes, women’s club football for the first time and much more. If you want to pre-order FIFA 23 ahead of its September release GAME has the PlayStation, Xbox and Switch versions up for early ordering

De Bruyne is followed by a Liverpool double-header of Mo Salah and Virgil van Dijk, both with scores of 90.

Cristiano Ronaldo also has an overall rating of 90, and narrowly beats out Heung Min Son and teammate Casemiro with scores of 89.

Remarkably, there’s no room for players from other top teams like Arsenal, Brighton, Leeds and Brentford, despite the current league positions.

Every FIFA video game ranked: The best and worst rated FIFA releases may surprise you

You can see the full Premier League top 25 players in FIFA 23 below.