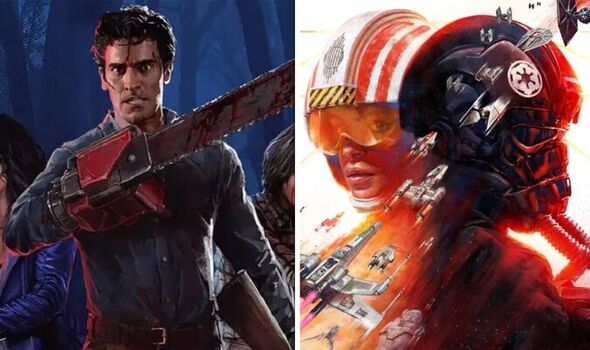 In its bid to take down Steam as the number one gaming platform on PC, Epic Games is giving fans multiple titles to download for free. The latest Epic Games giveaway is headlined by multiplayer horror release The Evil Dead. That’s in addition to adventure role-playing game Dark Deity and a special cheerleader pack of in-game items for Rumbleverse. The games and items are available to download and keep from now until 4pm GMT on November 24.

All you need to do is visit the Epic Games Store, login or create an Epic account and click to redeem the titles.

Once you’ve set up your Epic account, you can take advantage of future weekly giveaways, including next week’s offering of Star Wars Squadrons.

The critically-acclaimed Star Wars aerial battle sim will be free for one week only from 4pm next Thursday.

It’s likely to launch alongside Epic’s Black Friday sale, which will include discounts on hundreds of games.

As for this week’s free games, The Evil Dead is sure to please fans of Dead by Daylight and Friday the 13th: Video Game.

Teams will need to explore the map, complete missions and defeat enemies in order to seal away the forces of evil and win the day.

It features characters and locations from the original Evil Dead trilogy, as well as the Starz TV spinoff.

Dark Deity, on the other hand, is a strategy role-playing game with an old school visual style and emphasis on narrative.

Epic explains more: “A world on its last strand of hope brought to its knees by a Calamity centuries ago that tore down its mighty civilisations.

“Lead a team of four students in the Brookstead Military Academy, who are shut down on the mysterious orders of King Varic.

“The ruler of the Kingdom of Delia is preparing to break a millennium-old treaty and Brookstead students make for fine cannon fodder… However, these four soldiers are destined for more than just acting as unwilling meat for another grinder.”