When the bombs fell, it cleared everything away: communities, governments, and even whole economic systems. The world of Fallout: New Vegas turned to barter with bottle caps, a relic of the old world used to define currency and perhaps to remind people of a world where such items were so common they were virtually valueless.

New Vegas, with its sprawling strip filled with casinos and free markets, is perhaps the closest the world of Fallout has to a commercial heartland, so it makes sense that it would be the place where capitalism regains its footing. And if you want to become a post-apocalyptic robber baron, then might I suggest the Mojave Stock Exchange mod from hman101, now "with more features, more stocks, and an addon for Tale of Two Wastelands."

The mod adds a stock exchange to the Mojave. This means you'll be able to view, purchase, and sell stocks of local businesses, including the Crimson Caravan Company, Gun Runners, Mojave Express, Happy Trails Caravan Company, the Water Merchants, and more. Completing quests or murdering certain NPCs can cause the stock prices to rise or fall, but unlike the original Mojave Stock Exchange mod, those prices won't immediately change following player actions. Instead, they'll rise or fall a certain amount day by day, with the player to see their upward or downward trajectories via brokerage terminals and financial reports sent to their Pip-Boy. 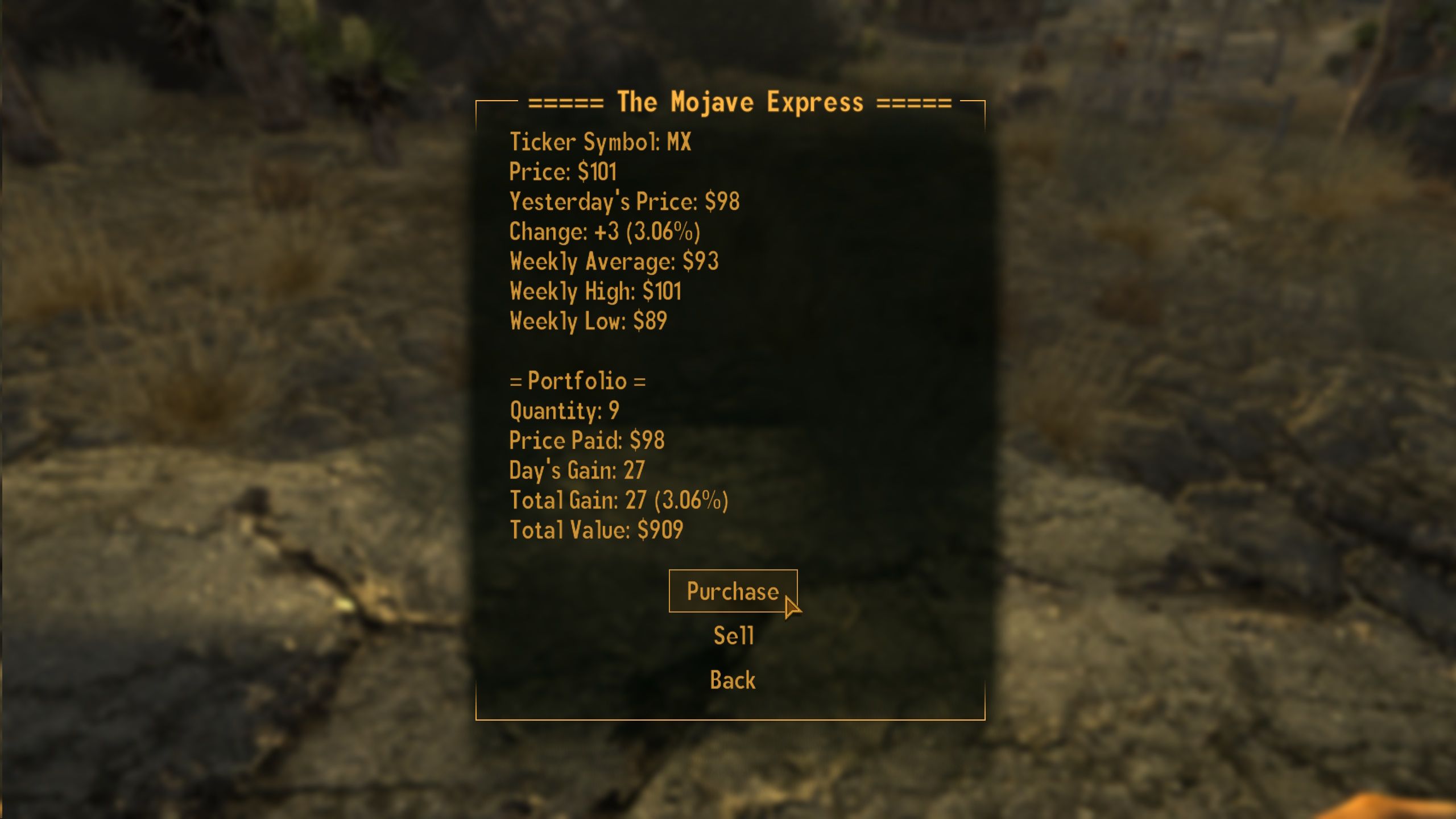 Buying and selling stocks works the same as any other item in the game. Purchases can be made through brokerage terminals scattered throughout the wasteland or through your Pip-Boy, with prices fluctuating daily. The idea would be to buy stocks at a lower price to sell them later at a higher price–perhaps after completing a quest that helps out the company from which you've purchased stock. In the real world, this sort of market manipulation is illegal, but apparently, it's just fine in New Vegas.

You can customize the mod so stocks are only purchasable at brokerage firms, to make brokerage firms charge fees, and to allow your barter skill to affect the prices you buy and sell stocks. There's also an add-on for Tale of Two Wastelands, the popular mod that combines both Fallout 3 and Fallout: New Vegas into one game.

Head on over to Nexus Mods to download the Mojave Stock Exchange and start your journey to becoming the Warren Buffet of the post-apocalypse.