Skyrim, Elden Ring, and Diablo all have pretty fun dungeons, at least to start with. You go in, slaughter a bunch of unfortunate bystanders (read: sleeping draugr and skeletons minding their own business), nick the loot, and leave. Usually, that’s all there is to it, but sometimes there’s a bigger reason to wake the dead with an axe to the cranium – this one has a dragon priest, this one has a fancy spell, and this one has an old tome that Deckard Cain needs – but they often look the exact same and share the same puzzles with limited complexity. It gets boring fast, but Fallout finds a way to turn copy-and-paste dungeon design to its advantage.

Fallout’s Vaults are all designed by Vault-Tec for the very immediate future of nuclear war, giving everyone a chance to hide when the bombs start dropping, granted they win the lottery. Given they’re all designed by the same company, they all look exactly the same with very similar layouts. We’re introduced to this idea right off the bat in three of the main games. The original begins in a pretty ordinary vault that needs new parts, so we’re sent into the wasteland to find them, and the third game sees us growing up in a vault from being a baby to a young adult, only leaving because our dad runs out. These are normal, habitable spaces, acting almost like underground cities instead of dungeons.

But then we find the ones out in the wild. They’re overrun with Fiends, Super Mutants, zombified plant people, and Mirelurks. They’re no longer safe havens, but the depths of the underground, ripe with loot, puzzles, and maze-like designs: they’re dungeons to a tee. But what keeps them interesting despite being so formulaic is that each and every vault is brought to life with its own unique backstory. Vault-Tec didn’t just design each one as a nuclear shelter for the lucky few, but as twisted experiments to push humanity to its limits, and that distorts the sterile and pristine well-lit hallways into unique terrors. 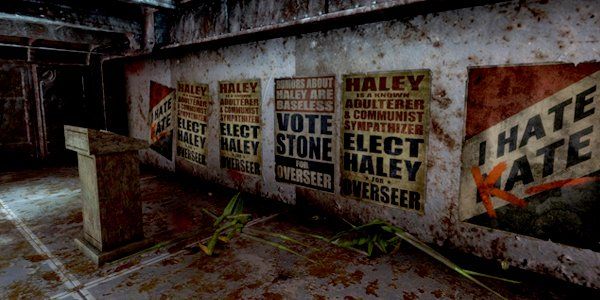 In Fallout 3, the world outside our vault constantly reminds us how much better off we were before. But then we come across Vault 87. Here, Vault-Tec was testing a forced evolutionary virus on its population unwittingly, contorting its helpless inhabitants into the giant hulking Super Mutants who stomp through the dingy, barely-lit corridors, now wielding rebars and other makeshift weapons. At low levels, they’re incredibly difficult to take down, especially if there’s more than one, so exploring this vault while avoiding groups of Super Mutants is chilling. And what makes it more chilling is that we know these were once people who had escaped the harsh life of the wasteland, not unlike Amata, Vikki, and Edwin – they’re even still wearing their vault uniforms, now ripped and stretched across their grotesque bodies.

That’s not all that’s damaged. The walls are cracked and riddled with holes, dirtied by years of neglect, while mannequins linger in hallways illuminated by emergency backup red lights. It has the same general layout and aesthetic as the vault we called home, but these tiny tweaks brought about by a tragic backstory make it feel completely different and far more unnerving. The medical station where our dad would have worked to help other vault-dwellers is now home to mutated abominations, experimented on by the Super Mutants, while the Overseer’s office is filled with debris and rubble. Complemented by scratchy, guttural music and the clashing metal of machinery, the warmth of humanity of the vault is stripped away in every regard. 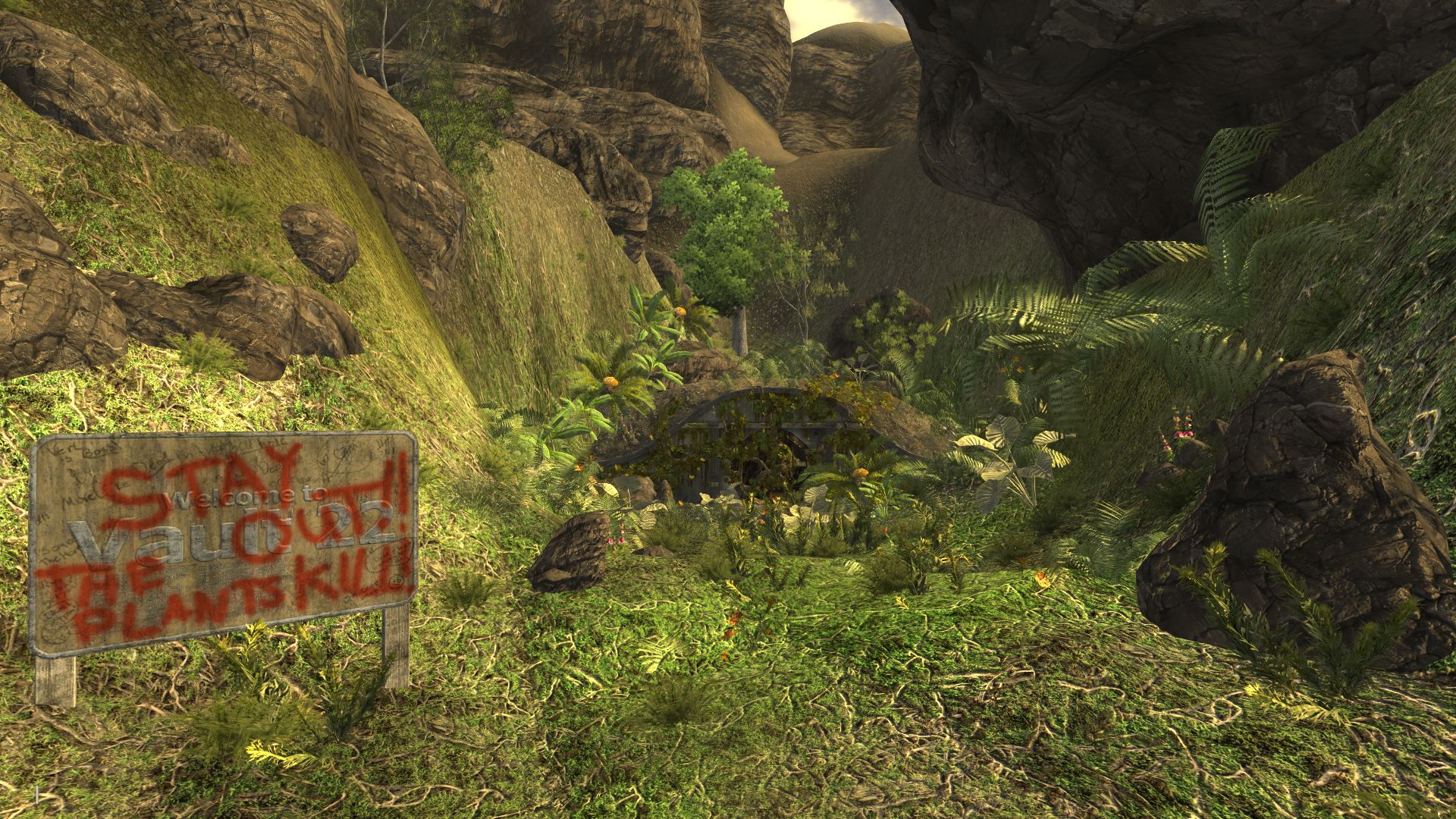 There’s also Vault 22. The exteriors are normally caverns that lead to big circular metal doors, but here, it’s outside, accompanied by an unusually lively environment rich with fauna, trees, and plants. Rather than the cold and desolate welcome we normally get, we’re invited into what now looks like the Shire. However, the story is just as unnerving as Vault 87’s – this vault was testing genetically modified crops and flora, inadvertently turning its population into green-tinted Spore Carriers. They’re hunched over, scurrying about like mindless animals, defending a vault they don’t remember the purpose of. We venture in like any other dungeon, but it has been overtaken by nature. Moss, flowers, grass, and other greenery have flooded its interior, making it beautifully bleak, and unnerving in a way that is so distinctly different to the body horror of the Super Mutants.

At their core, vaults are no different to Skyrim’s one million Nordic burial graves filled with the same picture-matching puzzles, but Fallout uses this repetitive, same-y nature to, ironically, keep things fresh. The shared familiarity across vaults highlights their tragedy, and delving into them becomes an exciting chance to unpack our morbid curiosity, rather than another eye-rolling “here we go again” moment. I want to see what horrors Vault-Tec conjured up, so I’m actively seeking out each vault with excitement to see what makes this one different. Maybe I’ll find pre-war tech capable of bringing life back to the ruins, or maybe I’ll stumble onto a vault where the door never shut properly, turning everyone who thought they’d escaped the bombs into undying ghouls. It’s a roll of the dice every time, and Vault-Tec always wins.