That sudden dopamine rush. That powerful moment of personal satisfaction. All across the modern gaming world, there's nothing quite like the feeling we get from unlocking a dubiously difficult achievement.

But collecting achievements just for the sake of it can grow old over time. That's why Square Enix has ensured that all our exploits are dutifully recognized. Final Fantasy 14 incorporates an achievement rewards system that keeps fans coming back for increasingly arduous endeavors.

Some of the game's coolest mounts, minions, accessories, and more belong to this coveted category of must-haves. But which ones number among the best of the bunch? The pinnacle of pride, the most glamorous of get-ups, the MMO equivalent of driving a fancy sports car into a fast-food drive-through and just knowing everybody's staring at you?

With so many to choose from, narrowing it all down is a tall order — but if we don't, who will?

Magitek Avenger A-1 Identification Key ("Out Of Hiding") 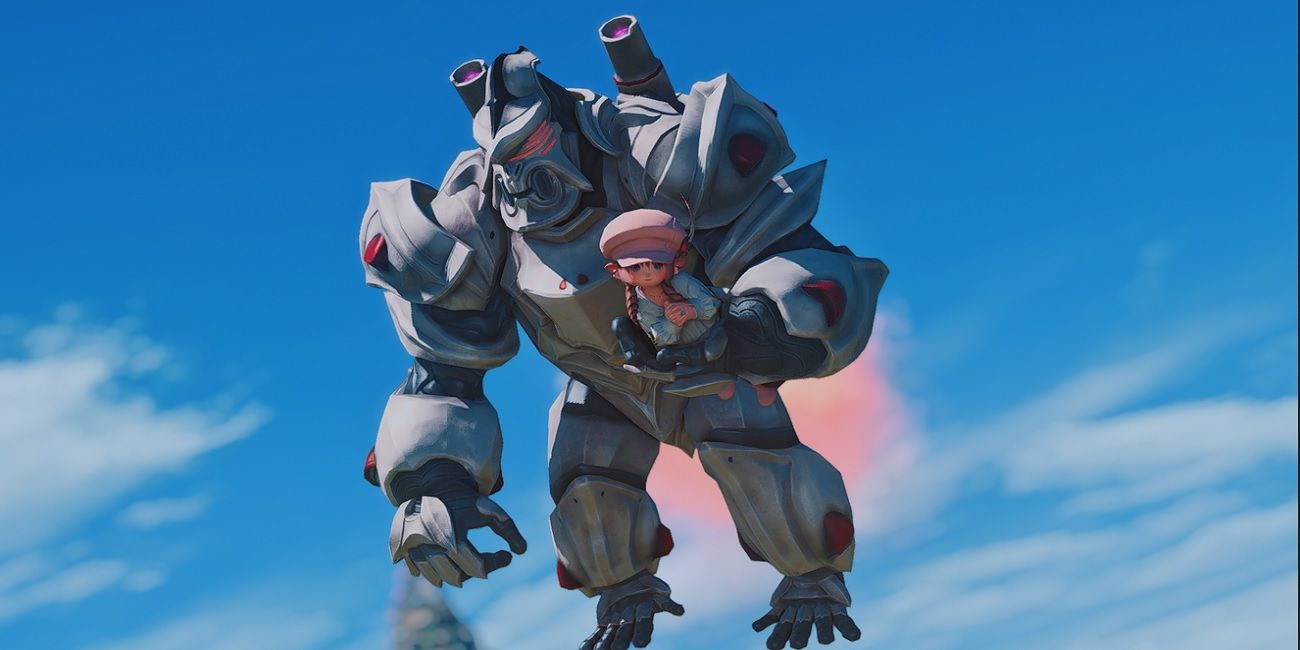 FF14's PvP scene isn't its most popular angle, but don't confuse "somewhat niche" for "it's dead, Jim." Indeed, diehard defenders of player-versus-player action can be found daily. And thank goodness for that, because the Rival Wings mode in particular sports some rather savvy treasure.

The Magitek Avenger A-1 isn't exactly an easy grab. The Out Of Hiding achievement asks a lot out of folks. Winning 100 matches in the Hidden Gorge campaign necessitates, well, playing a bare minimum of 100 matches. Probably a whole lot more than that.

But look at this thing. It's carrying a Lalafell in its hand. Remarkably, it will carry denizens of any other race just the same, no matter the size. The Magitek Avenger A-1 mount comes across as exactly the sort of Xenogears crossover Square Enix seriously needs to get on with already.

Related:Final Fantasy 14: Shadowbringers – Where To Find All Aether Currents In The Tempest

Kupo Crown ("Let Luck Be A Moogle I") 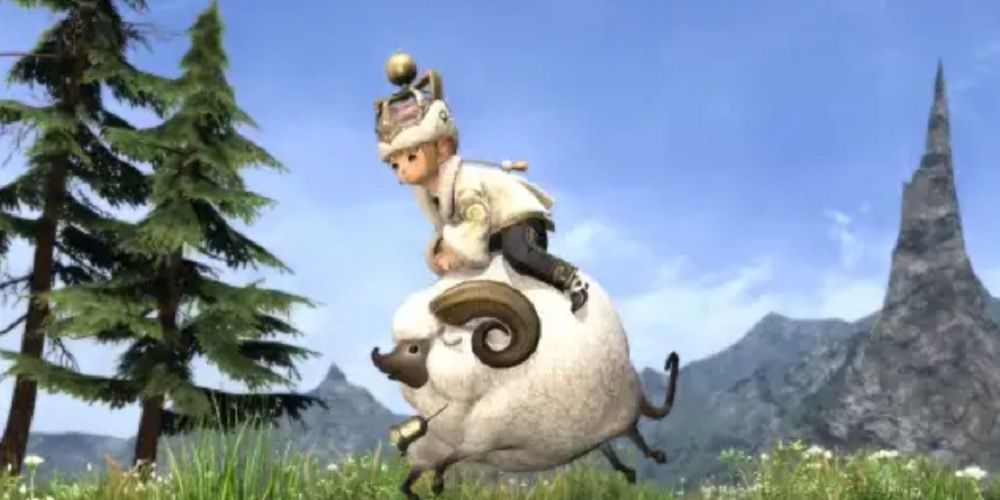 Fans fell in love with the city of Ishgard when it was finally introduced in Heavensward. The story, the characters, the tremendous sense of scale — it's all quite spectacular. For years, folks wished for more from these snow-capped cathedrals and towering tenements, so when the Ishgardian Restoration quests were introduced there was much rejoicing.

One of the quirkier aspects of this multifaceted crafting-and-gathering enterprise is Kupo of Fortune, a chance-based mini-game that players can enjoy over and over again by collecting stamps from their reconstruction efforts. Several achievements are tied to Kupo of Fortune, including Let Luck Be A Moogle I.

To earn this, you'll need to nab first prize five times. This shouldn't take too long. The Kupo Crown is arguably the best reward of the bunch; none can dispute your royalty among Moogles when you wear this, and that's a pretty impressive feat considering Moogles aren't a playable race.

And no, that albino karakul mount is not included. But wouldn't that be sweet? 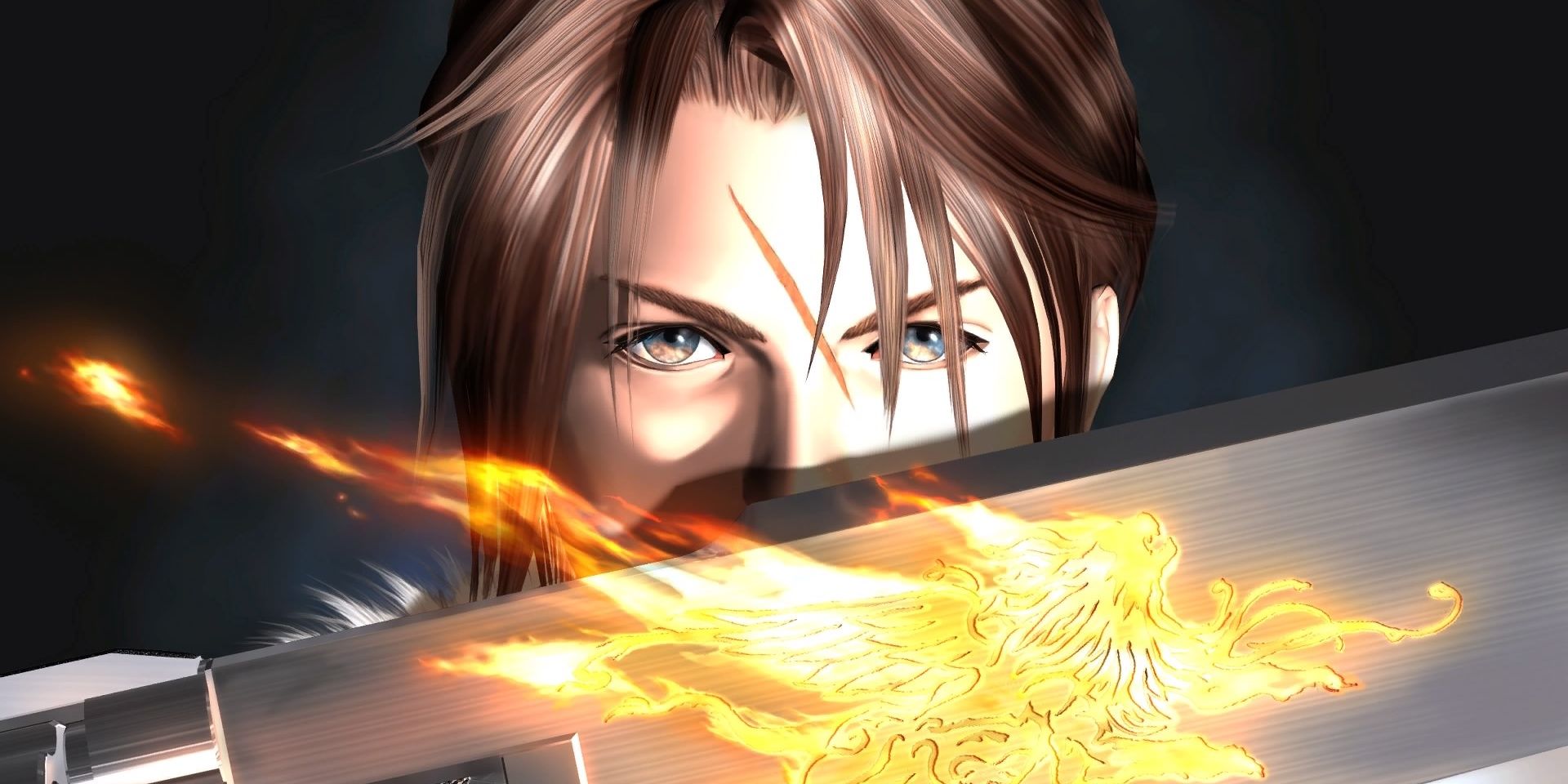 Perhaps it's slightly dishonest of us to include a legendary piece of official artwork rather than a shot of the Triple Triad card itself, but Squall Leonhart has always been too cool to play by the rules.

Triple Triad players in Final Fantasy 14 will want to build their decks as quickly as possible. There's no shortage of challenging rules like "Same" and "Plus" that will test one's resolve on their journey toward collecting every card in the game. The Squall Leonhart Card has excellent stats, with its pair of aces pointed down and to the left. It's a real threat when timed just right in a heated match.

Best of all, it's a cinch to acquire. Triple Team II requires players to defeat 30 unique NPCs in Triple Triad. With so many people in Eorzea and beyond itching to get their butts kicked, it won't be long before everyone's favorite brooding protagonist is saying "whatever" to the tune of "Shuffle or Boogie."

Astrope Whistle ("I Hope Mentor Will Notice Me VI") 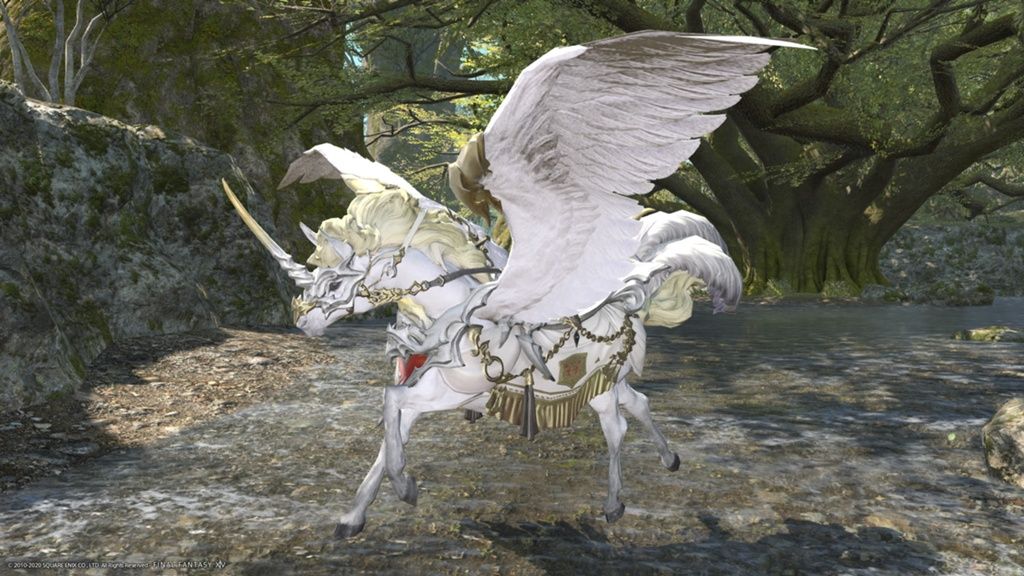 All the way on the other end of the difficulty spectrum is the Astrope Whistle which summons (naturally) a majestic Astrope mount. It's a two-seater. And it's beautiful. Look at it. That's a unicorn. An actual unicorn.

It stands to reason, then, that acquiring one is appropriately as rare as seeing a unicorn in real life. Well, almost. I Hope Mentor Will Notice Me VI is the sixth and last achievement tied to assisting other players in the role of PvE Mentor. First, you've got to qualify for that role, and it's a steep climb. Acquiring 1,500 commendations is probably the hardest of the bunch. Remember, this is all about proving your mettle as someone who can be relied upon to get newer folks out of a real pinch.

Mentors must then complete a whopping 2,000 duties via Duty Roulette: Mentor. Essentially, Naoki Yoshida and his talented team of professional sadists are saying that only the most skilled and battle-hardened Warriors of Light of them all will ever have a chance to ride a unicorn. Rude, if reasonable.

Related:Final Fantasy 14: Everything You Need To Know About Materia 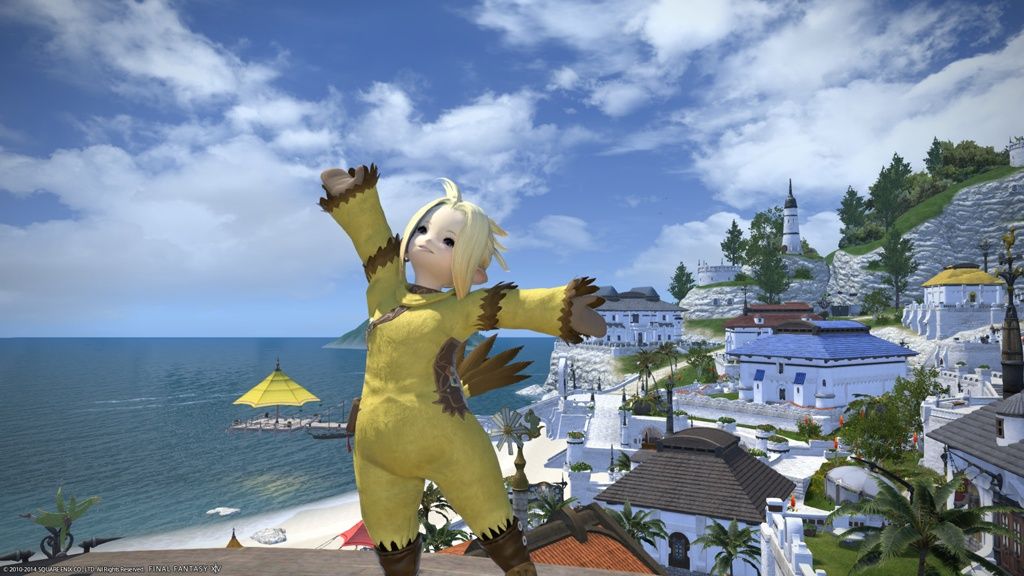 Don't neglect your Chocobo. It's mean. But more to the point, it's counterproductive. Take them along in fights and they'll gradually rank up, gaining access to a wider suite of abilities that are handy when you're in a party and downright invaluable if you're exploring the world all on your lonesome.

Get your Chocobo to Rank 10 and you'll earn Bosom Buddies III, awarding you this magnificent Chocobo Suit. That's all there is to it, but you should totally give Jonathas a visit in Gridania so you can purchase a Fat Chocobo Head to complete the look. You don't have to. But you should.

Octopus Traveler Title ("What Did Octopodes Do To You?") 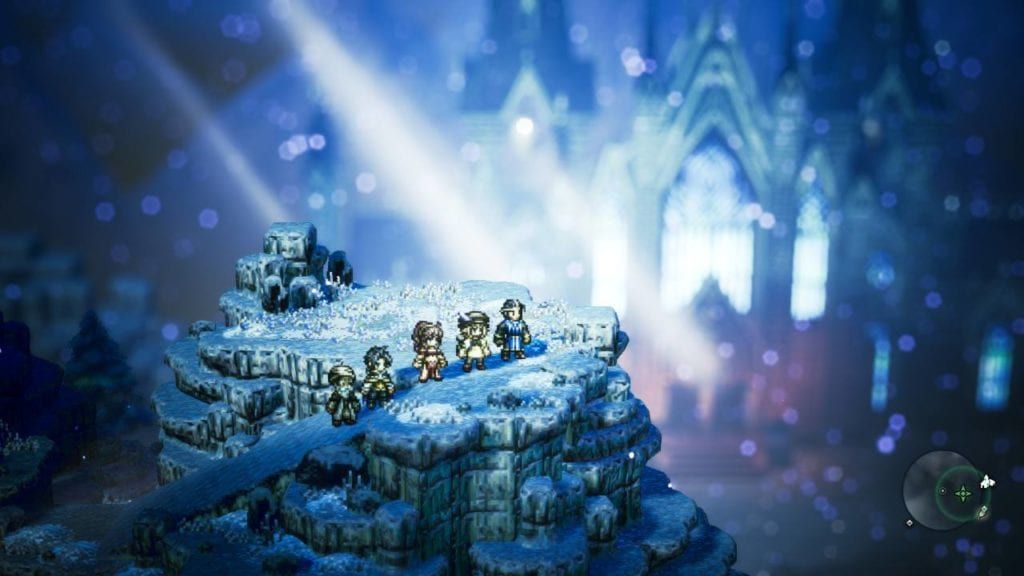 Octopath Traveler is a charming 2018 JRPG with breathtaking sprite-based graphics and a compelling battle system. If you're unfamiliar, be sure to stare in awe at the above screenshot.

What does any of this have to do with Final Fantasy 14? Two words: Octopus Traveler. Fans of this very different video game will want to fetch this rare title as soon as possible by earning the "Octopus Travelers" bonus during an ocean fishing voyage.

Ocean fishing was introduced in Patch 5.2, sending up to 24 players aboard the fair ship Endeavor in search of adventure on the high seas. It's all about what you reel in; to get the Octopus Travelers bonus, your party will need to haul 150 or more octopodes in a single expedition.

Gloria Ignition Key ("You Are What You Eat IV") 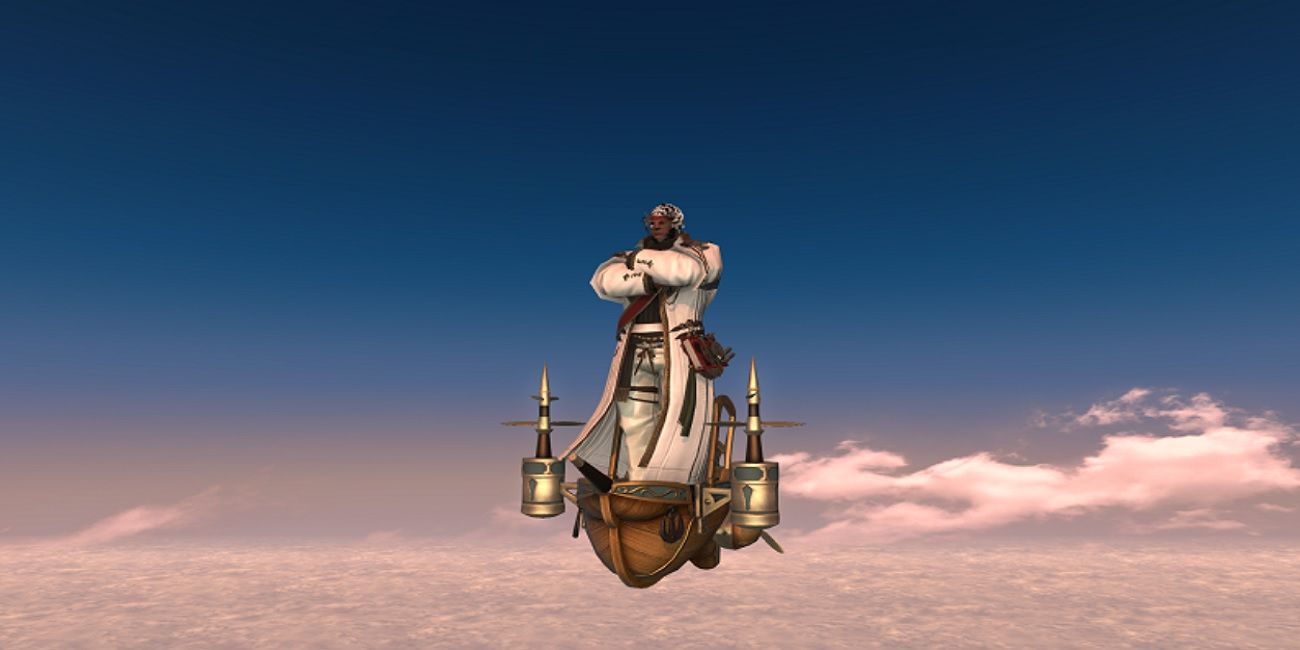 Airships come in all shapes and sizes. Mastermind engineers like Cid Garlond have seen to that for decades. Some can host massive crews. Others are perfect one-seaters. The Gloria-class airship, obtainable via the Gloria Ignition Key, is even smaller. All the better to cross one's arms proudly as they take to the skies in style.

The Gloria-class airship has that air of old-school Final Fantasy that FF14 just loves to toss at fans like morsels of nostalgic goodness. But it's also cute. That cuteness belies the manner in which it's acquired; You Are What You Eat IV demands that players win 200 matches in the Feast PvP mode.

Everything about the Feast is grizzled and dangerous. You're wolves. Feasting on wolf pups. As in, newer players who dare to get their hands dirty in the arena. Only the toughest survive. It's all fanciful nonsense, of course; no one actually dies in there. But nor does it insinuate the most adorable prizes are right around the corner. 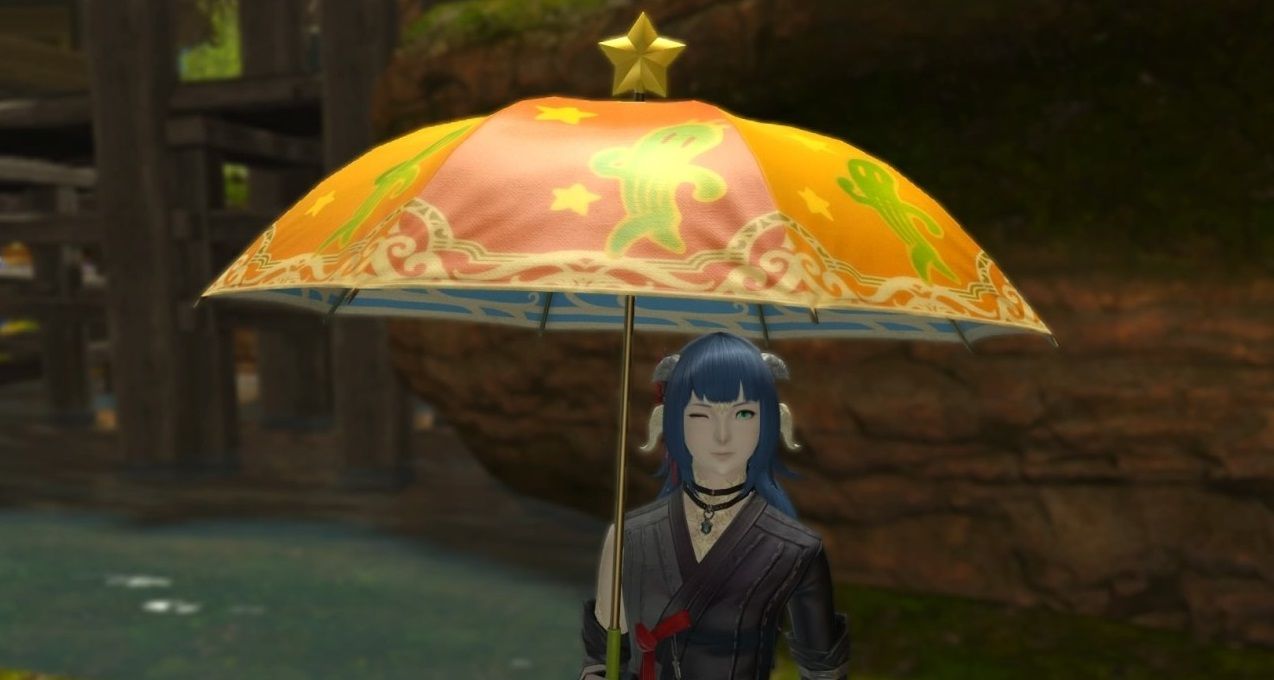 The people of Kugane love to strut around all day long with fashionable parasols over their heads. It's a sign of sophistication that marks Hingashi as a paradise of civilized discourse. Or something.

There are all sorts of parasols available in Final Fantasy 14, but brush them all aside in favor of the Gold Parasaucer and you'll show those stuffy Kugane citizens what it's like to travel in expensive style. Sure, it's got Cactuars all over it in kind of a tacky arrangement, but it's gold. Toss on your finest robe, strap a katana to your back, and even the Sekiseigumi won't mess with you.

The Open to Victory III achievement tasks players with winning 150 open tournament matches of Triple Triad at the Gold Saucer. This is time-consuming, to be sure; but it's really not that difficult in the long run, especially since open tournaments are seldom packed with real-life opponents. Usually, there are at least a handful of NPCs, and they're easier to goad into defeat than us flesh-and-blood types.