It’s 1999. I’m eight years old with the reading comprehension skills of a toddler and my favorite leading ladies are still Princess Zelda and Peach. Every RPG’s story has to be explained to me by my older cousin because I can’t sit still long, and lengthy paragraphs of texts don’t hold my attention. I’m playing Final Fantasy 8, I meet the spunky Rinoa Heartilly, and something just clicks. The daughter of Galbadia’s military commander is complicated, messy, and screws up more than she succeeds – but it’s why I love her.

At first pass, Rinoa is neither really talented nor useful. She’s got an idea in her head, but getting from point A to point B seems like an exercise in futility. I didn’t really understand her at first. But every time I played, I found a new reason to fawn over her with the wisdom of age that doesn’t really come at eight-years-old. Rinoa often needed ‘saving,’ much like my beloved Peach or Zelda, but Rinoa was neither afraid of nor chained down by her vulnerability.

Meeting Rinoa at the SeeD ballroom dance is a cute, fleeting interaction where I already began admiring her for her bravery, but it’s the journey to Timber that reveals her character. Rinoa Heartilly is 17 years-old, a rebel freedom fighter, and painfully empathetic mess seeking to protect civilians from the Galbadian government. Her father is the military commander of said government, but she’s long dropped his name in favor of her mother’s maiden title, Heartilly.

Rinoa is accompanied by a ragtag group of companions known as The Forest Owls, all working towards the same goal of liberating Timber. My first inklings of “oh no, she’s a mess” kicked in somewhere around her presentation using toy trains, where she explains how she plans to kidnap a dictator while simultaneously fawning over a crush on a troubled mercenary called Seifer. Rinoa is desperately working against a system far bigger than her little group of rebels, straining to go beyond her constraints, but it isn’t enough. Rinoa’s best actually doesn’t even come close to getting the job done – she fails and ultimately winds up fighting the dictator’s body double, who also happens to be a terrifying monster.

Our protagonist, Squall, and his SeeD unit pick up on this, too. Rinoa is an untrained, seemingly sheltered young woman acting on bad information. SeeD members are a group of soldiers that have spent years in a military academy, and they’re less than impressed with Rinoa’s impulsiveness. Rinoa’s overreactions stir up trouble, but again, she’s got her mind set on a goal, and even without a fool-proof plan, she knows what’s important. Inaction isn’t an option for Final Fantasy 8’s heroine, which keeps leading her down this messy path, but Rinoa’s refusal to quit continues to be a catalyst for change in the story.

Anyway, operation liberate Timber is a disaster; the SeeD mercenaries can’t seem to see their own misgivings and scold Rinoa. Squall and Quistis in particular are offended by the boldness that accompanies her inexperience – but that’s just where her charm comes in. Rinoa doesn’t need lectures on wrong from right – while Squall and Quistis are the types to debate the risks of pursuing a worthy cause, Rinoa jumps into action. She may come out no better for it, but she’s going to try.

This carries through to the party’s journey to Deling City. The hired hands working for Balamb Garden meet with General Caraway, Rinoa’s father, and he reveals his plans to assassinate the Sorceress Edea and put an end to all of this political turmoil. Rinoa’s dismissal from the conversation here is always painful for me to watch. Final Fantasy 8 is full of touching moments, but there’s something about how everyone in the room dismisses her need to help that sends my stomach into knots. It makes me anxious, it makes me hurt for her, and above all else, I just want to see her succeed. But yet again, Rinoa tries and misses the mark.

I look at Rinoa and figure she’s the type to cry when she’s angry. I do it too. She gets frustrated, and she can’t articulate herself well, but she also can’t stop the words from coming. Tucked away in General Caraway’s elaborate mansion, it’s Rinoa versus her friends and her father. No one believes she’s of use, and the brief spat between her and Quistis here will always be one of my favorite moments in Final Fantasy 8.

To her excitement, Rinoa comes up with a plan (and it’s a bad one) to put the Odine Bangle on Edea to suppress her powers. She doesn’t really know how she’s gonna do it, but she’s gonna do it. Quistis is furious at the suggestion, seeing the ten million ways this can go wrong. She doesn’t let Rinoa explain herself and finally snaps, “This isn’t a father-daughter quarrel. This isn’t a game.” Quistis is confident Rinoa is a naive child with a poor understanding of the world around her. And that’s when my heart breaks for her. When Rinoa crumbles to the floor, all alone and left out of the plan, I end up crying for her every time.

As I went from little girl to young woman, I think that feeling became too familiar, and I loved Rinoa’s resilience through that arc, even when she couldn’t get it together. There’s an overwhelming anxiousness that comes with trying to overcome your inexperience, your meekness, your fear of rejection and failure. It’s worse when the outcome is bad, and the people who underestimated you are smug in your mistakes, but Rinoa’s commitment to continuing her fight despite those mistakes is comforting. 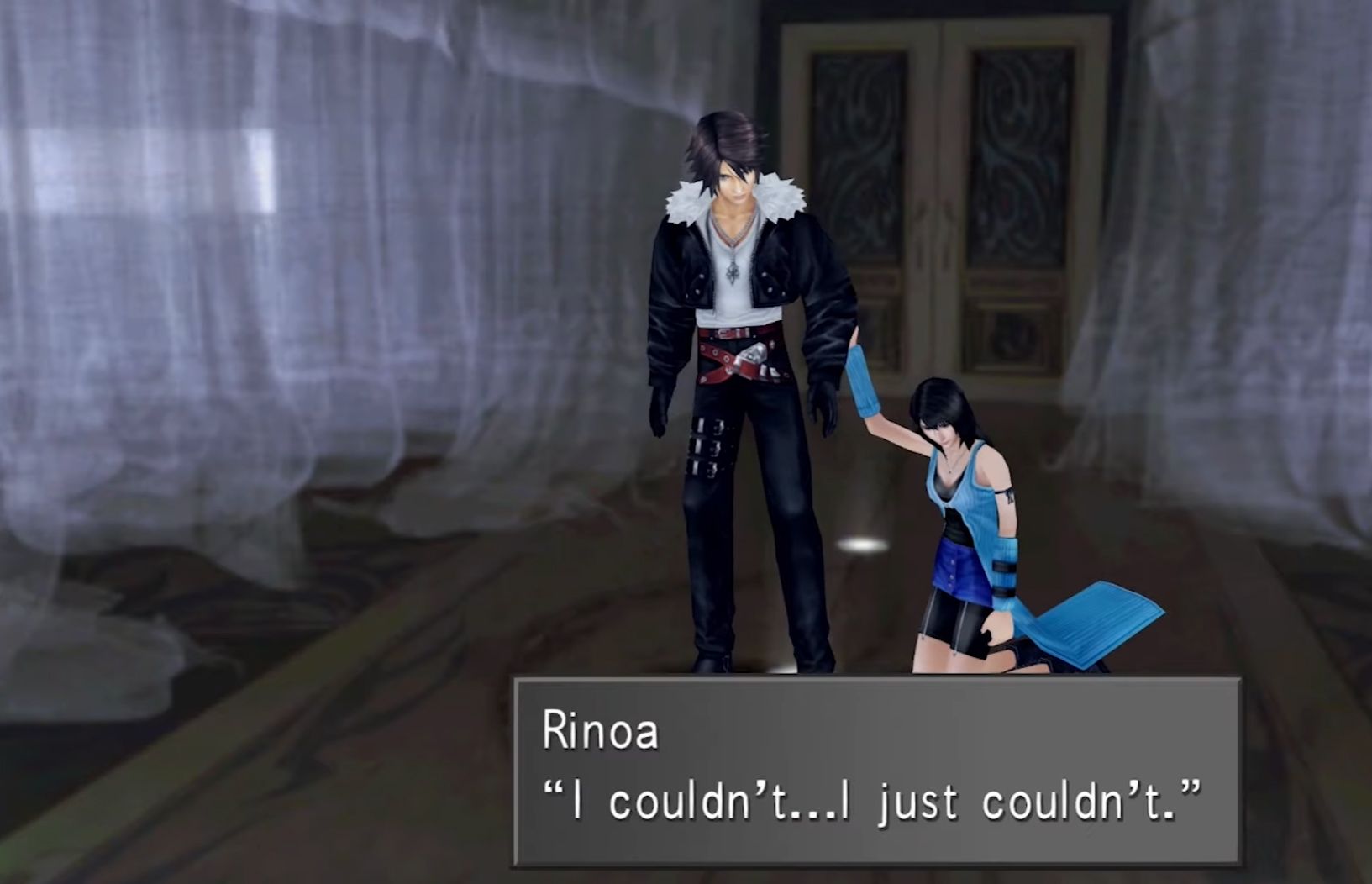 Ultimately, in the Sorceress assassination plot, Rinoa screws up again because she can’t just sit back and has to be saved – but I’ve never interpreted it as the damsaling her detractors have. Again and again, both in her personal relationships and in her duties to the causes she commits herself to, Rinoa makes a mess throughout Final Fantasy 8. She does need her moody boyfriend, Squall. She needs her friends; she needs her dog; she needs all of Balamb Garden. Like so many of us, Rinoa is constantly stumbling, and she can’t tackle some of the harder moments alone.

There are plenty of examples of when Rinoa’s character isn’t done the justice she deserves through the game’s writing, but Rinoa’s personal failures aren’t a weakness of her characterization – they’re a strength. And I have always loved that wide-eyed, head-strong princess of The Forest Owls for her ability to maintain relentless optimism in the face of failure.

Next: Forget “He” Or “She” – Godzilla Is A Gender-Neutral Icon