Serving as the primary launching pad for the primary conflict in Fire Emblem Engage, the appropriately named Hostilities chapter sees you engage in your first real encounter. But don't expect Engage to go easy on you here. There is lots of room for you to over-extend and have this fight blow up in your face.

We will guide you through this encounter, and show you how you can claim victory while defeating the hordes of Pegasus Knights threatening to put Alear right back to sleep. We'll also help you navigate the post-battle sections, and make sure you collect all the valuables waiting for you once the sword swinging has subsided. 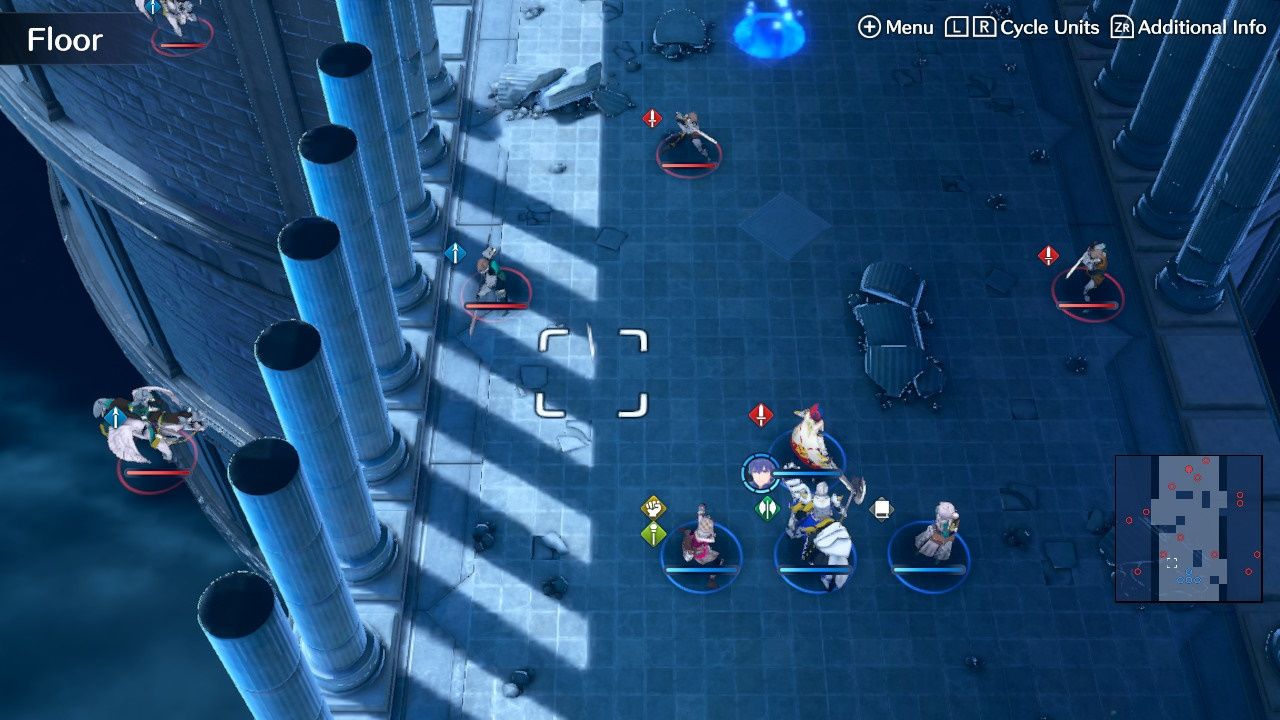 Once you see all the enemy troops you are going to have to contend with, you may think that this battle is pretty brutal. There are five Pegasus Knights (two on the left side of the bridge, and three on the right), three swordsmen (two starting on your side of the bridge and one positioned at the end of it), an axe-wielder (who will be right in front of you at the beginning of the battle), and at the far end of the bridge is an archer, and the boss: Abyme. Abyme is a buffed-up axe-wielder who is heavily armored. Her armor prevents her from being broken by a sword attack. For all intents and purposes, this is the first real battle in the game. But let us let you in on a secret… don’t worry about being outnumbered, as backup is on the way (but we'll get into that a little later. 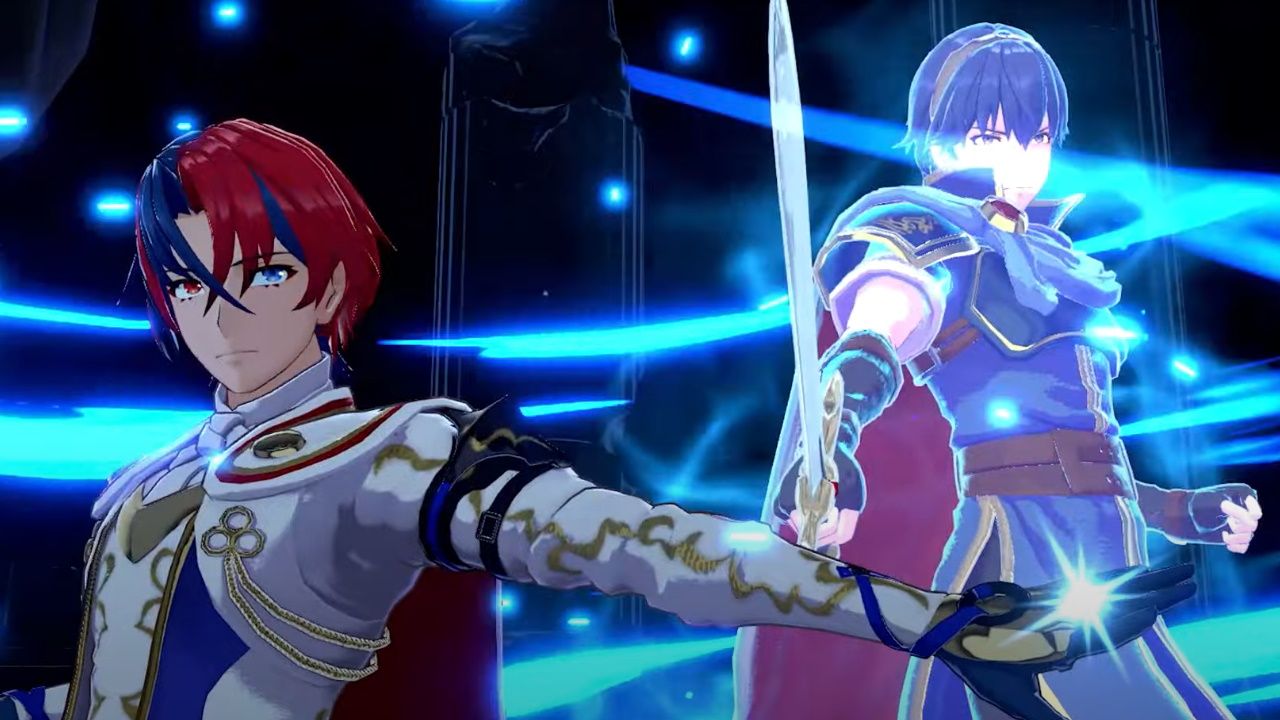 To start things off, you are going to want to be a little more conservative in this battle, as there are a number of Pegasus Knights that can close the distance, and they are all equipped with spears. This means that Alear will be at a clear disadvantage when fighting them. So, don’t move him too far forward. Keep him on the left side of the map (the axe-wielder should be his first target). Also, make sure you enter into his engage form. You will be able to stand in the pool in the middle of the screen to recharge your meter, so you may as well get the boost to your evasion. You need to shield him from these winged horrors!

Speaking of the winged horrors, the Pegasus Knights start the battle on the outside of the bridge. They can enter the bridge on the right, but the pillars are blocking them from entering the bridge where your troops are on the left. The entrance on that side is further down the bridge.

Alear isn't the only unit you want to keep safe. Clanne isn’t exactly a tank. So, be damn sure you are keeping an eye on how many troops are in range of him. For the first round of this fight, move him to the left side of the bridge. You want to be as close to the center as possible, but without being in range of any enemies. He won't be able to hit anyone during this turn, but ideally, after the Pegasus Knights come in from the right he will be positioned perfectly to deal heavy damage to one of them. As for the other three, Alear should break the Axe-wielder, then Vander should follow-up with his own attack and finish him off. Framme can either hang back with Clanne, or backup the other two with a Chain Guard. 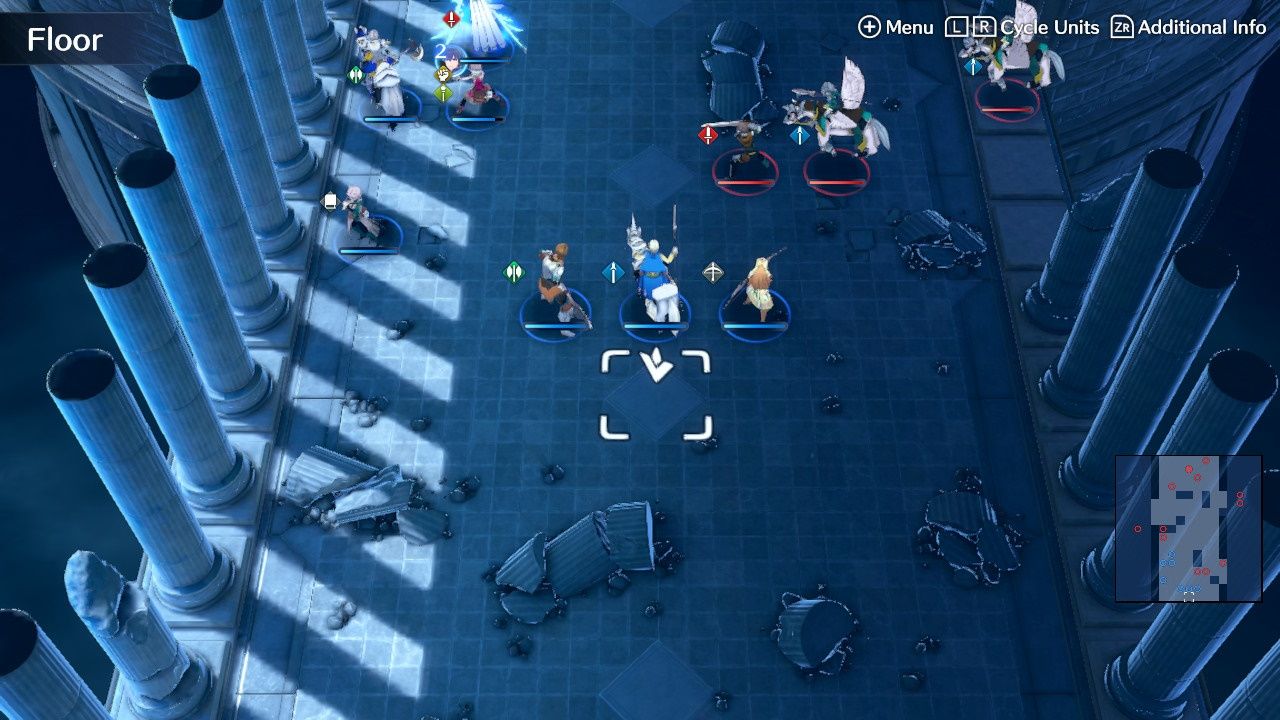 Once everyone has moved, you will have both Swordsmen on your butts, as well as a couple of Pegasus Knights on your right, and three more further down the bridge. Thankfully, you will now be joined by Boucheron, Etie, and Alfred. Let us be clear here, Etie is the hero of this battle. She will absolutely destroy every Pegasus Knight she hits with her bow. Even on hard mode, it will only take Etie a single shot to kill them. So, have her take out the Pegasus Knight further to the right (you want to leave the one closer to Clanne for him to deal with). Then, have Alfred engage one of the Swordsmen who will, at this point, have attacked Vander and Alear. Finally, move Boucheron down to soften up the other Pegasus Knight, and finish them off with Clanne. 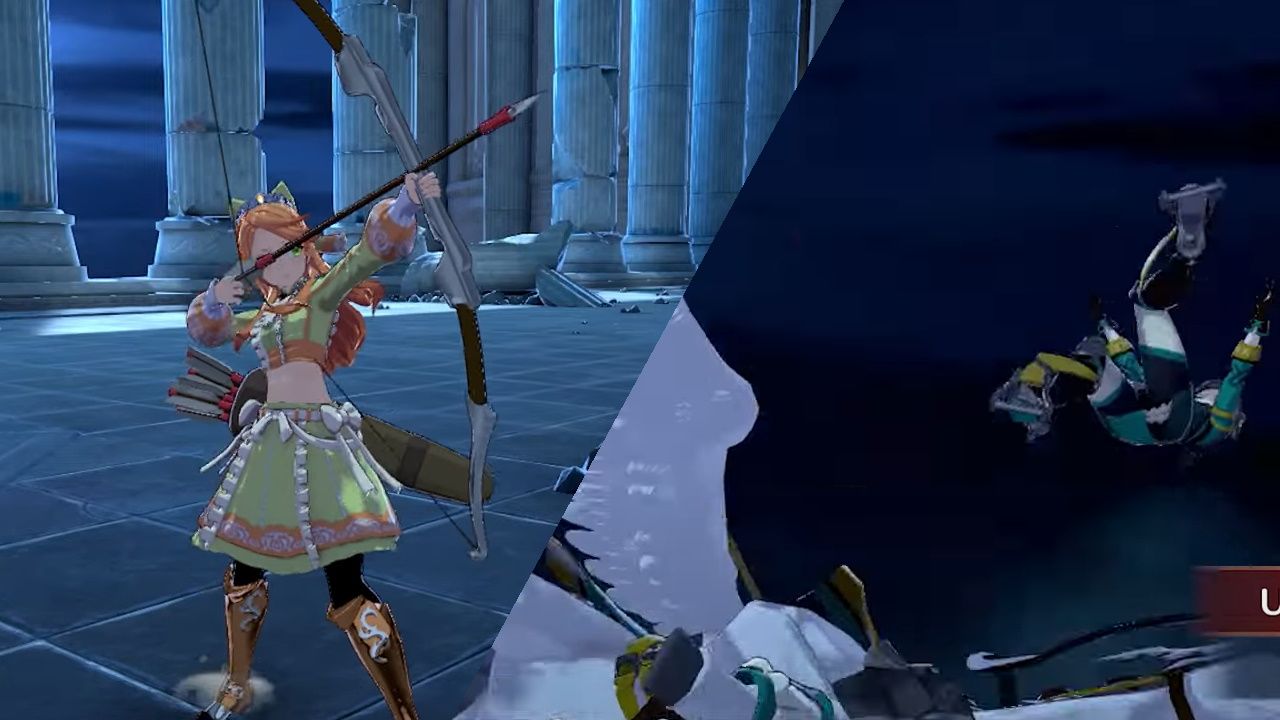 From here on out, just push forward while taking advantage of your opponents' weaknesses. So, Etie will be in charge of taking out Pegasus Knights, Alfred will fight the Swordsmen, Clanne will deal ranged damage from afar, and Framme will provide healing. As for Vander, he is tough enough to fight anyone without being in too much trouble, even the Swordsmen. So, just put him on clean-up duty. 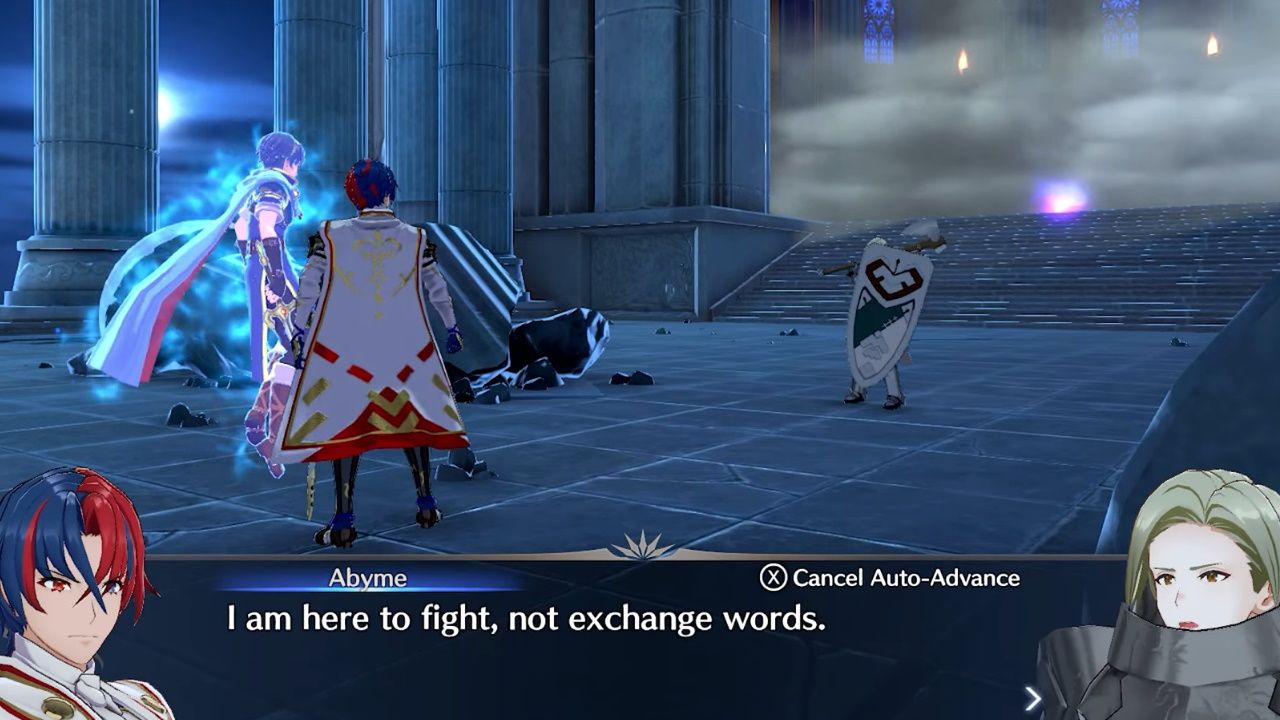 Once you have finished off most of the troops, and made your way to the end of the bridge, you will need to deal with Abyme and an Archer. Send Vander out to get the Archer, as they are the farthest away. As for Abyme, she is this battle's defacto boss. However, beyond being resilient, and hitting a little harder, she doesn't really do anything particularly special. Just make sure you have everyone in range of her fully healed, and keep Clanne, Framme, and Alfred out her range. She hits too hard to have any of them mix it up with her. Activate the engage mode with Alear if you aren't already in it, and hit her with the rapier. Then, lay into her with Boucheron, and Vander (though you may be off killing the archer). Finally, finish her off with Etie who hits her for huge damage.

The most important element here is to make sure you don't leave anyone extra vulnerable when fighting Abyme. She hits too hard to make that mistake here. Pay attention to those red lines, people. 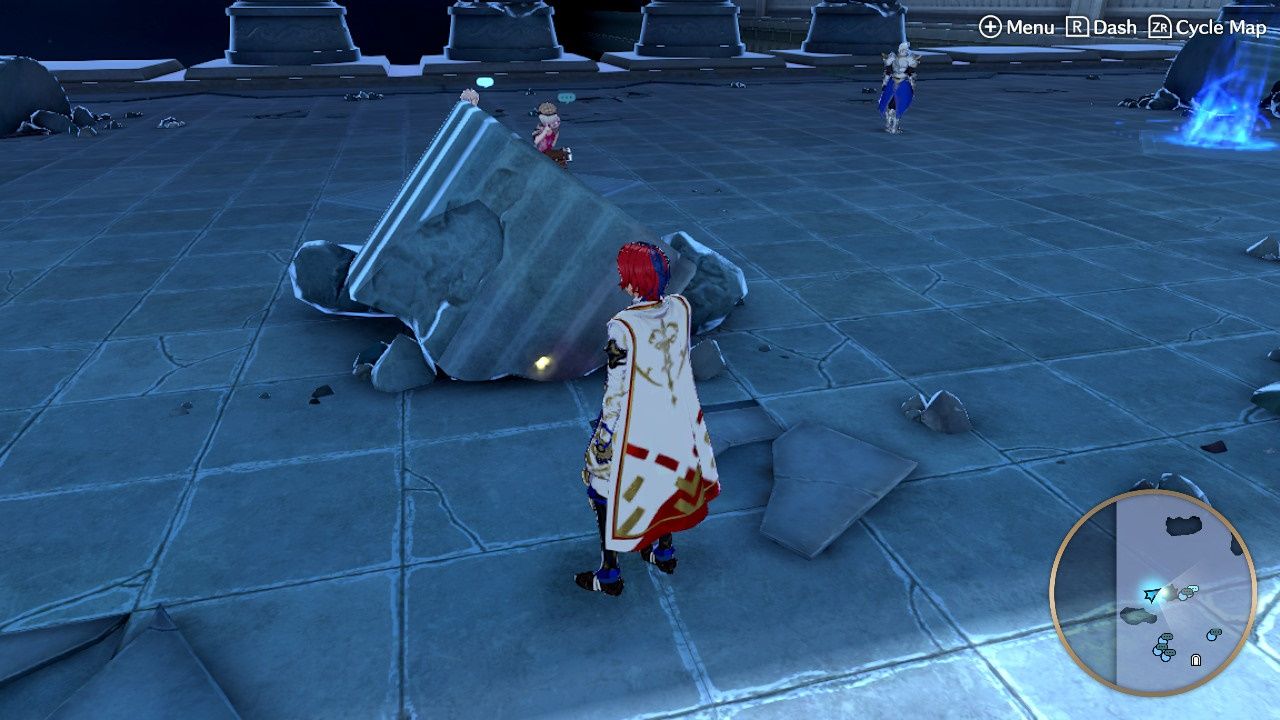 Once you are finished the battle, and have watched the cutscenes that follow it, you will be able to explore the battlefield. Make sure to talk to everyone. If you fought alongside them, you will have built up support points. Certain characters will now provide with Bond Fragments, which are an extremely valuable currency of sorts. You are going to need as much of this stuff as you can get. After talking to everyone, look for glowing yellow spots on the mini-map. There are resources here to claim. You will be able to pickup 50 more Bond Fragments, and 20 Iron Ingots. Once you have finished off here, go to the glowing column in the center of the map to leave. 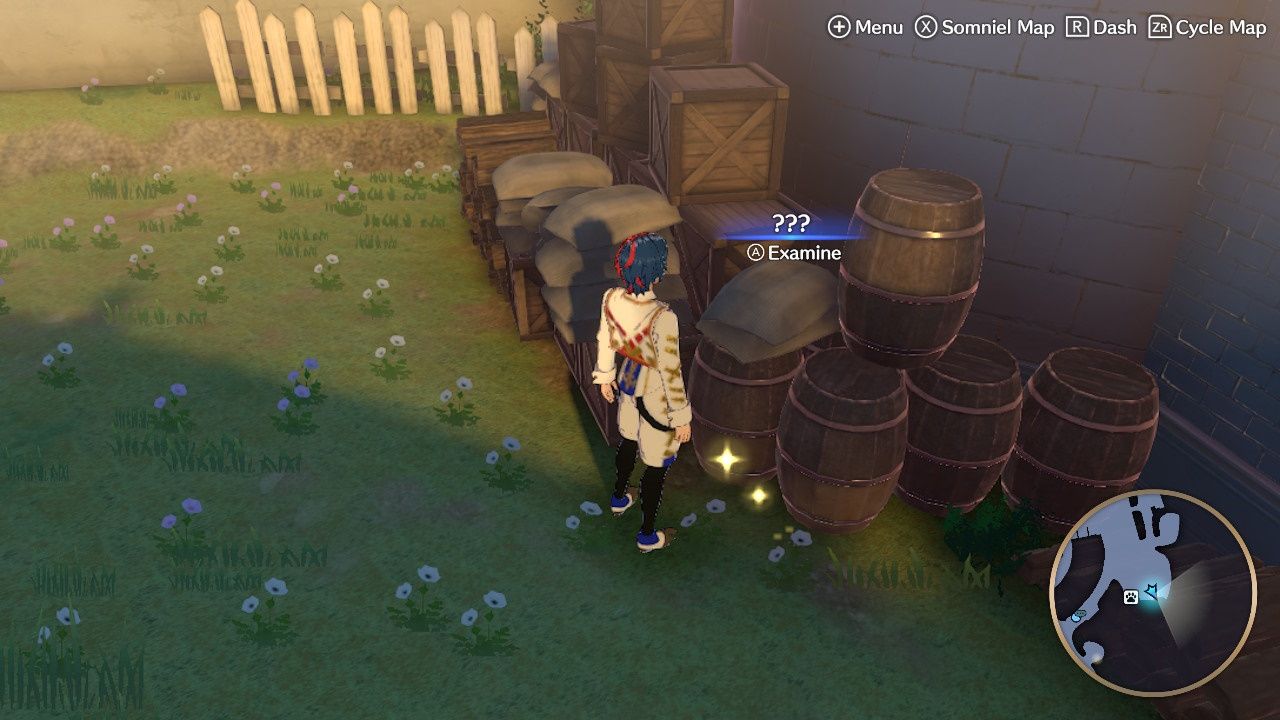 In the stables, you may find Horse Manure and milk. There are apples, grapes and oranges in the orchard. You can find a Pretty Pebble beside the fountain near the orchard. There are nuts on the stone walkway above the orchard (they are sitting in front of some boxes and sacks), and there are more nuts in the garden beside this spot. Make sure to go to the grotto; there are 150 bond fragments lying around here. There is also wheat flour on the second level of the grotto. All of these items may reappear when you return to Somniel. Some seem more consistent than others. So make sure to do your round every time you return to base. As you donate more money, more of these items will be generated.

The Pretty Pebble is a gift. Make sure to always grab it, as it will advance your relationships with characters. The Horse Manure is also a gift… we aren't sure how effective it is, but it is certainly fun to give to people and doesn't seem to hurt relationships. 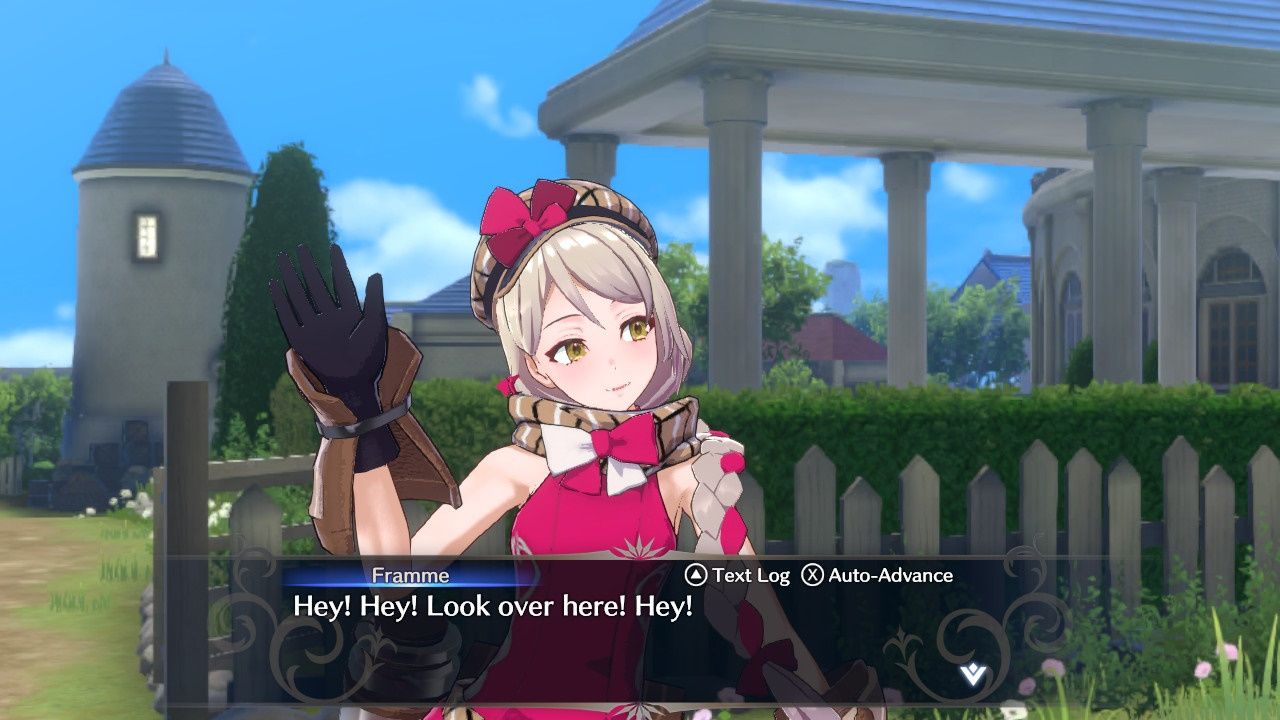 While back at Somniel, you can also talk to your units. This is where you can advance your relationships. If you go to the map screen, you will see that some characters have speech bubbles above their head. A green speech bubble means that you are close to advancing a level with them (a present may just put you over the top), a gold speech bubble means you are ready to view a cutscene and advance your relationship. Framme will be the first character you can improve your social rank with.

However, while Somniel will eventually have a ton of things for you to engage with, almost all of it is unavilable at this point. So, once you have collected everything, and talked to everyone, it will be time to hit the road and start the next chapter.