I scrabble around the wreckage of what used to be my vehicle to try to find some food. My hunger is so bad that I’m having physical reactions now, my stomach cramping as I haven’t eaten anything in hours, probably days. Even then it was probably radiated or diseased or something else rotten. The climate here is fucked, for want of a better term, and dust storms rage around me as I carry a dying battery across a rickety bridge. No, this isn’t winter in the UK, this is sci-fi survival game Forever Skies.

Developer Far From Home has created an unforgiving experience, which befits the climate apocalypse it is trying to portray, but can be quite frustrating to get the hang of. I died within the first five minutes of the demo multiple times in a row. Most of the time it was my fault, other times I couldn’t work out where to go (there are hidden stairs), and sometimes it was bugs. I crossed the bridge, I collected some scrap, I read some information about the world on a tablet, I died. Rinse, repeat.

Finally I found those bloody stairs and progressed a little further. There are no hints in Forever Skies, not even for journalists. When I eventually chewed on some disgusting peppers and gulped down a couple of pints of filthy rainwater, I was somewhat quenched – albeit at the expense of my health. As with many survival games, Forever Skies is mostly about keeping on top of your various health bars – here it’s health, stamina, hunger, and thirst. The longer you stay out in the corrosive atmosphere, the more susceptible you are to its potent illnesses. The more contaminated liquid you drink, the faster your health decays. You know the drill. Eventually, though, you find an airship. Now you’ve got the simple task of repairing it. 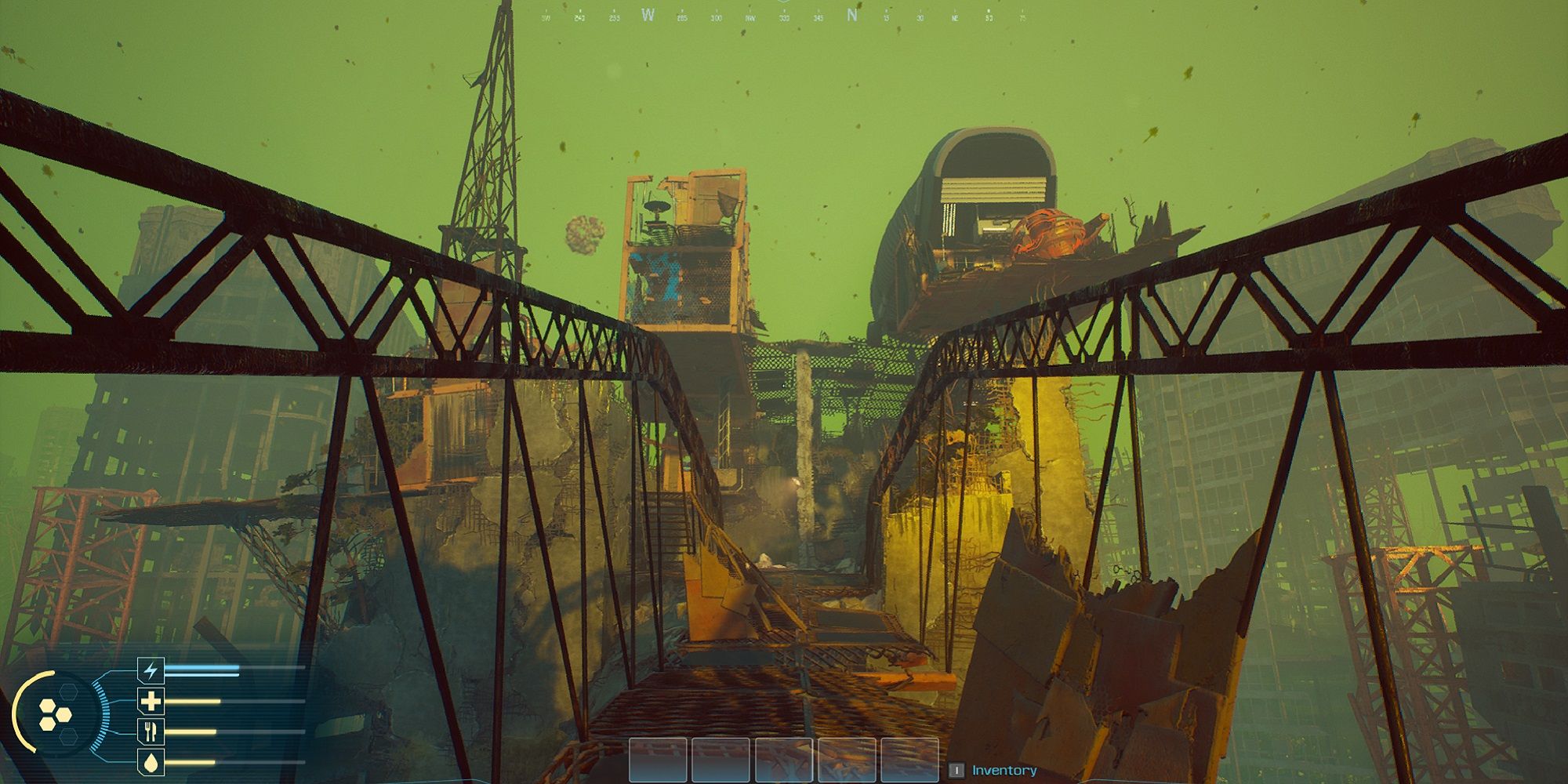 This is again unintuitive. The Fabricator you need to make water purifiers, airship engines, cookers, and fishing rods is well signposted, dead ahead of you, but you can’t place it anywhere. I thought it was a bug at first, as my character died from hunger after minutes of trying to find a flat surface to place the equipment. On my second attempt, though, I realised you could open the airship’s doors and place the equipment inside. That one’s on me.

Once you’ve worked out this kind of thing, the whole game opens up. Far From Home told me that there will be some kind of introduction in the final game, but suggested it would be more of a storytelling device than a tutorial. But I didn’t actually mind the frustration. It was annoying at the time – obviously – but fits the unforgiving world that Forever Skies is trying to create. 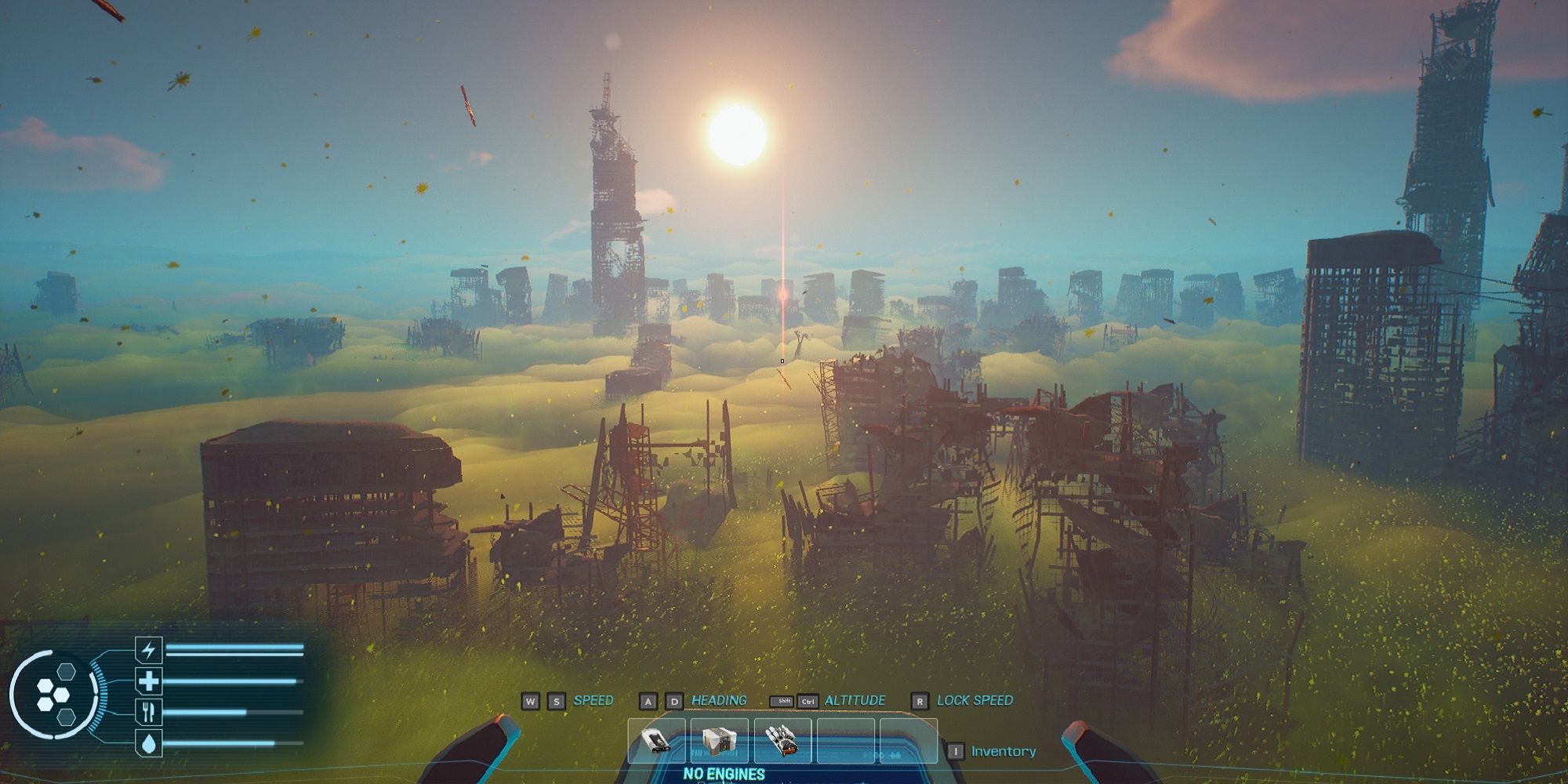 Once you’ve repaired your airship, things get a lot easier, a lot faster. You can harvest scrap materials faster, which means you can catch more food and purify water with your new machinery. Your health bars are suddenly above the halfway point – in the green – instead of teetering on the edge of starvation at all times. The demo only gives you 20 minutes to explore once you’ve repaired your airship, which quickly disappears when you’re in a constant cycle of catching and preparing food, collecting and purifying water, and constantly harvesting more materials from the world around you as you sail through the tempestuous skies. The cycle quickly becomes natural, though, and if you’re into survival games you’ll quickly get into the satisfying swing here.

That’s what Forever Skies ultimately comes down to. If you like this genre, you’ll probably enjoy it. There is next to no direction, no map markers or hints other than the scrawled notes left by those who perished on this unforgiving planet before you. The whole world opens up when you get your airship, but where do you go? 20 minutes wasn’t enough to explore properly and storms prevented me from going in one direction, but if you want an authentic experience of surviving on a post-apocalyptic Earth, this might just be the game for you. 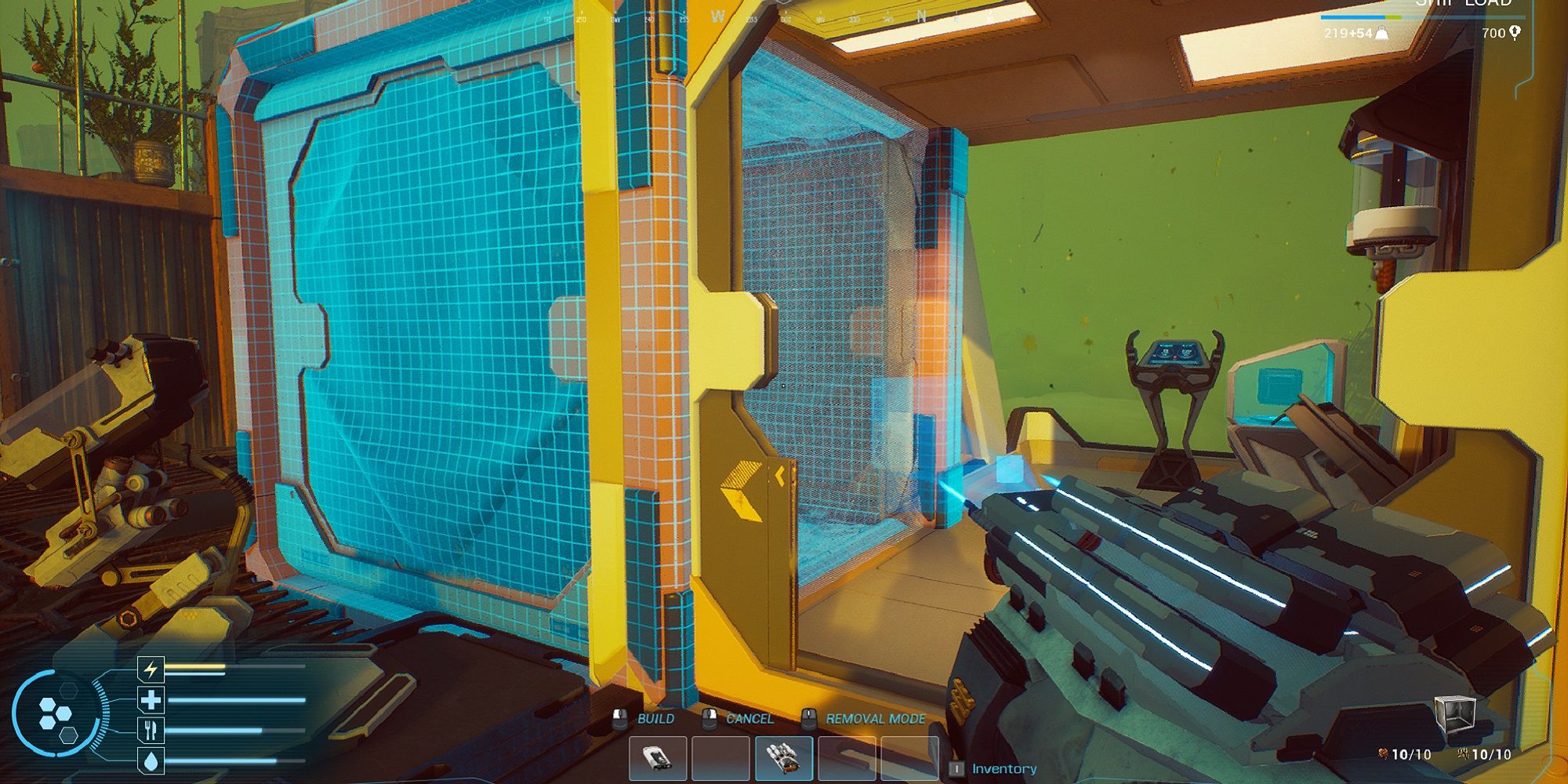 Forever Skies is pretty buggy, but it is a beta so you can cut it some slack. However, on occasion the respawn button didn’t work so I had to quit out of the game when I died, at which point it respawned me with a slither of hydration that meant I died instantly time and time again. There isn’t any way to change your mouse sensitivity – it’s very sensitive by default – and some inputs simply do not work on controller. As I say, it’s in beta, but the bugs were so jarring that they impacted my initial experience and it would be remiss not to mention them.

I did forget about the bugs once I’d figured things out and was deep into the survival loop though. I’d love to spend more time exploring the procedurally generated skies, upwards as well as outwards, but that’s what the full game is for. Forever Skies’ sci-fi world is compelling, if a little close to home, and I can see myself getting lost in the ship customisation and machinery optimisation aspects when I’m not too busy eating moths or drinking soiled water. The full game promises co-op, combat, and a host of more dangerous viruses, and I could see it becoming a post-apocalyptic, PvE version of Sea of Thieves as you and a friend struggle to manage an airship together. The preview beta shows good ideas and plenty of promise, but I think your enjoyment of Forever Skies will ultimately come down to whether you like survival sims and managing health bars or not.

Forever Skies will release on Steam this year.