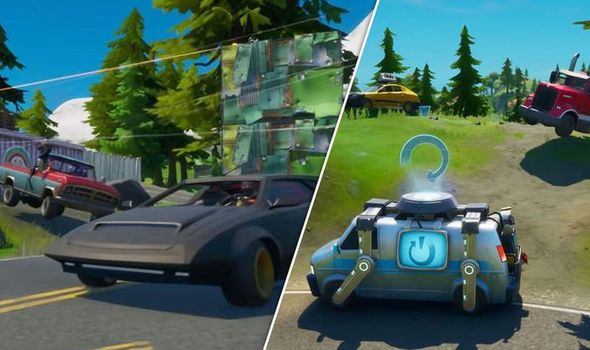 That’s because a leaked challenge for week 6 of the season 3 Battle Pass looked specific to the new vehicles heading to Battle Royale.

The Fortnite challenge in question was gas up a vehicle at Catty Corner, and the leak made fans wonder if cars would launch alongside the latest challenges.

Unfortunately that rumoured release date came and went without a Fortnite cars launch, with Epic Games later confirming the feature had been delayed slightly.

On Thursday July 23, the day Fortnite cars had been expected to launch, the game’s official Twitter posted: “Fender bender? #NoSweat.

“Run out of gas? That’s not covered.

“Our lawyers are currently sweating the policy details and fixing typos like ‘otter coverage’ instead of auto coverage.

“Due to this, many vehicles got taken for inspection.

So, it looks like the Fortnite cars feature will be launching in August – and we could have a good idea of when it will be rolled out.

The next Fortnite patch is Fortnite update 13.40 which should be launching on either Tuesday August 4 or Wednesday August 5.

Given Epic teased that the Fortnite cars feature was “a few weeks” away this sounds like the most probable release date.

Fans were first teased about the arrival of cars in Fortnite when the season 3 Battle Pass launched last month.

The Battle Pass trailer that dropped in June showed some of the vehicles that will be heading to Fortnite as it promised “new ways to get around”.

Among the Fortnite cars shown were a sports car, a pickup truck, a taxi and a lorry.

When Fortnite season 3 launched large swathes of the map were flooded, which didn’t make for ideal driving conditions.

And Epic teased that one the water levels reduced on the island the Fortnite cars feature would be deployed.

On the season 3 launch day they said: “As time goes on and water recedes even more locations will be uncovered.

If the Fortnite cars feature does arrive in update 13.40 then it will be dropping in what could be one of the last major Fortnite season 3 patches.

Fortnite season 4 is scheduled to launch at the end of August, so 13.40 might be the final update before we move into the next season.

Related posts:
eSports
Number One CS:GO Team Vitality Reportedly Looks To Add Sixth Player
Dignitas CSGO moves Fifflaren to VP of Esports, vENdetta to head coach, Friberg to in-game leader
MPL-PH Season 6 week 6: Omega follow up big win, Aura & ONIC add victories on day two
Rocket League POI possibly coming to Fortnite soon – Daily Esports
Call of Duty: Black Ops Cold War's Zombies mode could be revealed on Sept. 28
Recent Posts
This website uses cookies to improve your user experience and to provide you with advertisements that are relevant to your interests. By continuing to browse the site you are agreeing to our use of cookies.Ok