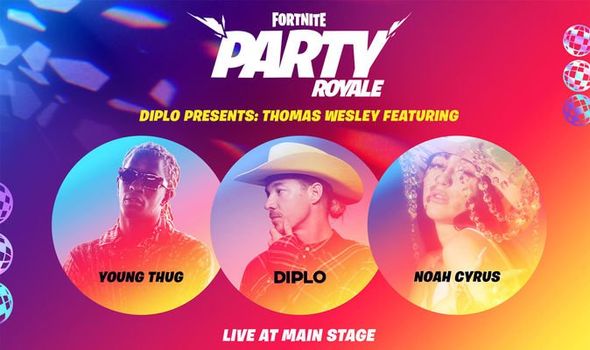 Epic Games has confirmed the dates and times for the next Fortnite Party Royale event.

As revealed earlier today, players will be able to drop into the mode to watch the latest performance planned for June 2020.

This will be headlined by Diplo, who will be premiering his latest album, Diplo Presents: Thomas Wesley.

But the good news is that even if you can’t make the first show, it will be rebroadcast by Epic Games later on.

The next Fortnite Party Royale event has been scheduled for Thursday, June 25, 2020, across all platforms.

This means that however you play Fortnite Battle Royale, you will have no problem tuning in.

As mentioned above, this week’s show will feature Diplo, as well as special guests Young Thug and Noah Cyrus.

The Fortnite event time has been set for 9pm ET, or 2am GMT on June 25, if you live in the UK.

Gamers will be able to catch the show as long as they arrive in Party Royale mode before it ends.

Epic Games has also confirmed that the rebroadcast of the event will be happening on Monday, June 29, 2020 at 9am PT, 5pm GMT.

Anyone planning on attending the next Fortnite Party Royale have also been told that they can dress up for the occasion.

This means being able to grab outfits like Deadfire, Desperado, Rio Grande, Frontier, Rustler, and Nightlife.

Emotes will also be available, including the Knee Slapper Emote, and more in the Item Shop starting Wednesday, June 24, at 8pm ET.

More details regarding the upcoming Fortnite event can be found below, courtesy of Epic Games:

Diplo returns as part of his Party Royale DJ residency to the Main Stage with the LIVE Fortnite premiere of his latest album, Diplo Presents: Thomas Wesley.

The music and dancing start at 9 PM ET/6 PM PT, but if you’re fashionably late, that’s okay! You can still catch the rest of the live show as long as you join before it ends. Be sure to check fortnite.com/partyroyale for local showtimes.

PLAY IT ON REPEAT

If you miss the Diplo show, catch a rebroadcast of the full premiere on Monday, June 29, at 12 PM ET/9 AM PT. The show will once again be happening at the Main Stage, and just like the first airing, you can still join in during the show.

To celebrate the album premiere, we’re bringing back some of your favourites Outfits like Deadfire, Desperado, Rio Grande, Frontier, Rustler, and Nightlife, the Knee Slapper Emote, and more in the Item Shop starting Wednesday, June 24, at 8 PM ET (the day before the show). Gear up for the show if you like suiting up to the music!

If this is your first rodeo in Party Royale, you may be wondering how to get to the mode. To get there, simply go to Battle Royale and select the Party Royale playlist.