Fortnite remains a complete anomaly. It is both the most creatively bankrupt and undeniably innovative game in the world, and has been for several years. Its early success was possible because Epic Games was in the right place at the right time to rip off PUBG’s battle royale formula and make it available to a much larger audience across multiple platforms.

It had the cartoonish aesthetic, simplified gunplay, and finger on the pulse of culture that nobody else was paying attention to, and thus it became the front runner. Nothing has really come close to achieving the same level of prominence in the zeitgeist, even as the game pilfers from the likes of Among Us, Apex Legends, and so many other competitors to create modes and mechanics that quickly become the centre of conversation. That outlook hasn’t changed, and we’ve almost become complacent to how easily it gets away with everything.

Paradise debuted this past weekend, a new season which will run until December as we progress through Fortnite’s narrative and unlock new cosmetics across the battle pass. Highlights this time around include Brie Larson, Gwen Stacy, new original characters and something I can only describe as a Jesse Pinkman catboy. There is a staggering amount of variety on offer as usual, and we’re bound to see more crossovers as part of surprise events and reveals in the coming weeks. As usual, I’m on board, but the real highlight this time around is a new mechanic that transforms Fortnite into some form of bootleg Splatoon.

A mysterious liquid known as Chrome has started to take over the island. It has corrupted the environment and threatens to swallow up everything it touches, but that also means it has some valuable applications in combat when used in the right ways. New weapons found in chests across the map make use of this new phenomenon, while scientists have also fashioned them into strange grenades that imbue the user with temporary powers that disobey the laws of Fortnite-physics which we’ve grown so accustomed to. Chrome Splash – as the items are called – are in plentiful supply and add a whole new dimension to gunfights.

Use one, and you gain the ability to sink into the ground itself, becoming a liquified metal demon that can move at astonishing speeds to sneak up on enemies or run away from a sudden skirmish in order to heal up and prepare for the next fight. It’s Splatoon, and even moves similarly to Inklings swimming about in their own paint. A clear marker is shown on the ground so you aren’t completely invisible, while springing forth from the ether to deliver a surprise shotgun blast is similarly satisfying to wiping an enemy team in the colourful Nintendo shooter. It is utterly shameless, but nobody seems to care all that much. 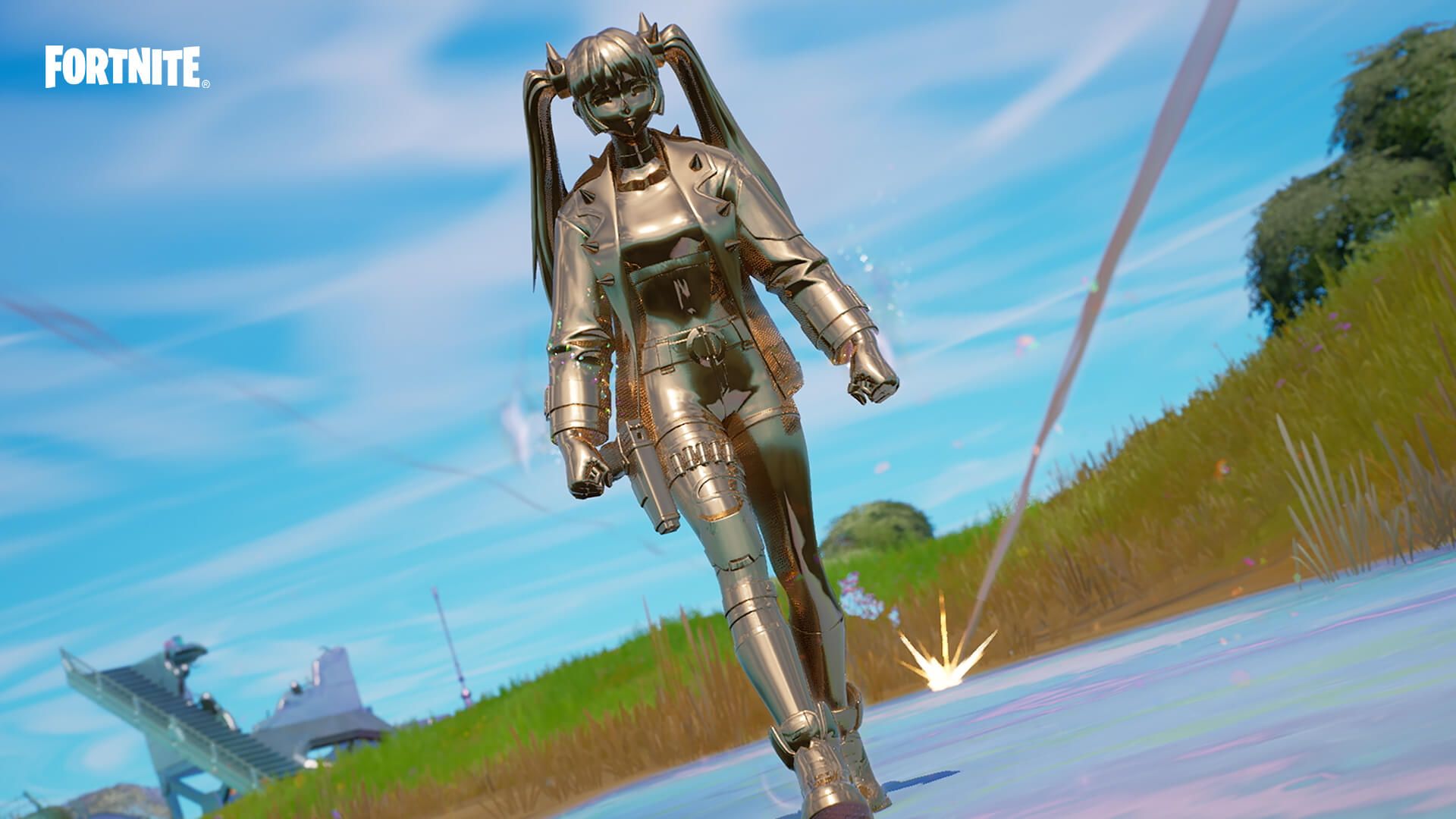 I play on No Build – because building is for losers – so combat in Fortnite is often a case of positioning, accuracy, and response time. You land more shots and start laying into someone with a lower vantage point and chances are you’ll emerge victorious. Chrome changes all of that in such a fascinating way, and much like the recent Dragon Ball Z crossover, it recontextualizes how we’ve come to play after all this time. My usual tactics are defunct because the moment I’m spotted some fool could throw down a Chrome Splash and noodle his way up to me. Next thing I know we're throwing down and I’m up against the wall begging for mercy. I’ve been on the other side of this conundrum too, and can still remember the fear on Ariana Grande’s face as I blew her brains out with a shotgun in Tilted Towers.

Fortnite is a simplistic game on the surface. You jump out of the Battle Bus, gather loot, and do your best to survive amidst everyone else. That alone is fun, and made rewarding thanks to the generous progression system, but Epic Games is always looking to keep things fresh. In this case, that means stealing from another shooter that is always staying fresh on the Nintendo Switch. It doesn’t care about the obvious comparisons, and is big enough to shake them off regardless of how blatant they are. Besides, we’re all having fun and nobody is getting hurt, so who am I to complain? If you need me I’ll be getting soaked in the chrome.