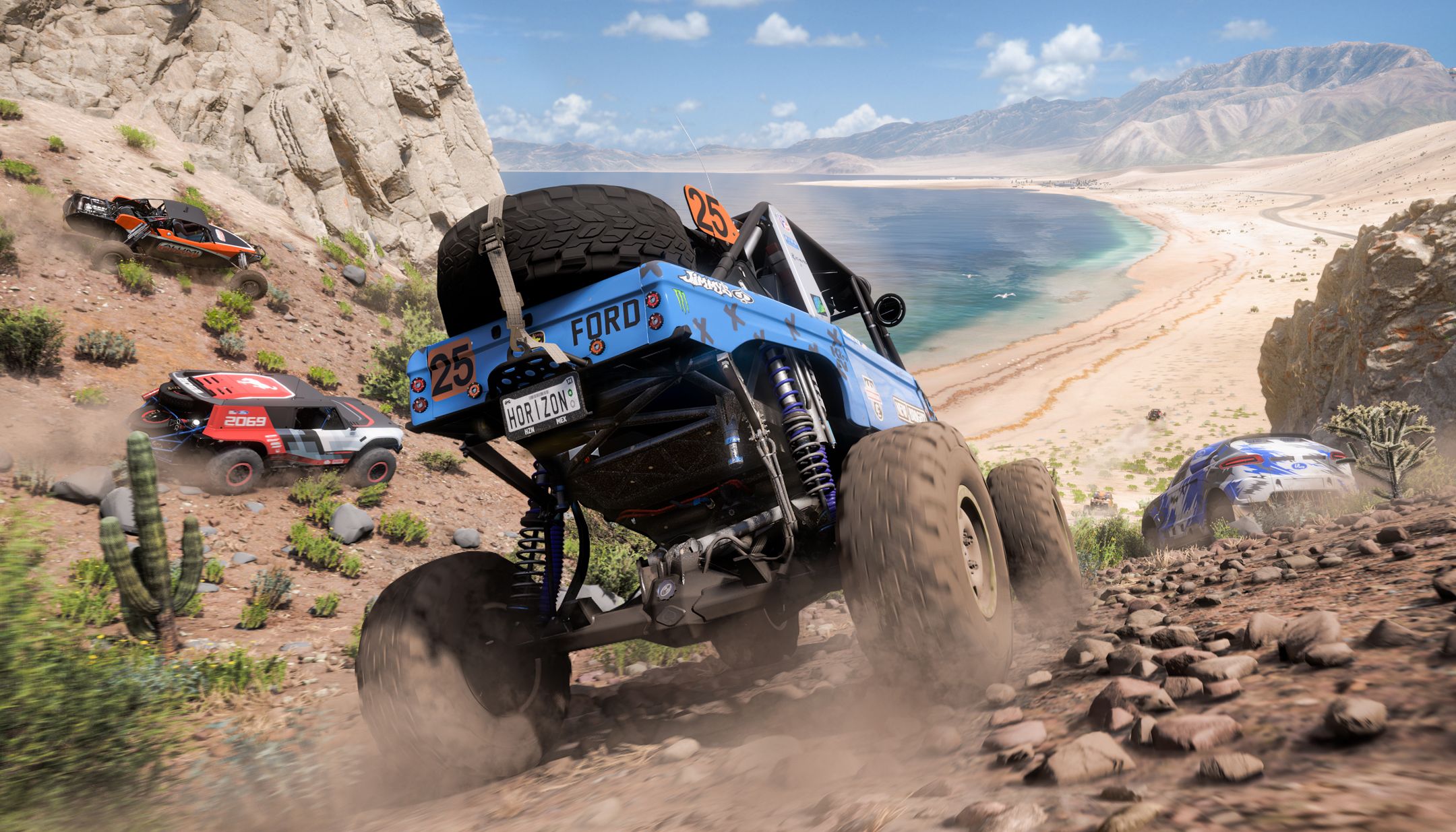 The Wednesday Inbox imagines an Aliens inspired follow-up to Alien Isolation, as one reader enjoys going back to Quake.

New Horizon
I’m really hoping that Halo Infinite’s release date is going to be announced on today because otherwise that’s got to mean a 2022 delay. Since there’s nothing to talk about for that though what I would like to say is that those eight minutes of Forza Horizon 5 were amazing.

I’m not even that big into racing games – and will be much more interested when this tech is used in other kinds of games – and yet the realism of the graphics and the quality of the open world was amazingly impressive.

I’m not really sure what’s considered to be the best graphics at the moment, I guess it becomes difficult during the transition to a new generation. But I guess maybe Ratchet & Clank: Rift Apart? I can tell you I found Forza Horizon 5 much more impressive than that and I could actually see it being a bigger selling point than Halo this year, whether it comes out or not.
Korey

Very excited
I had to write in because I’m beyond excited, I’ve just managed to order a PlayStation 5 from Very this morning.

I’ve been messed about quite a bit trying to get one of these consoles and I’m very happy to be joining the next gen at last.

I’ve ordered Ratchet & Clank, Returnal, Sackboy, and Demon’s Souls with the console, so those should keep me happy for a good while. Hopefully this is a sign that more retailers will be getting stock more regularly than they have been, because apparently Very had them in stock for a good while before they sold out according to the Stock Informer website.

I’m really hoping that the scalpers get stuck with stock that they can’t sell because they have made it much harder for real gamers to get one of the new consoles.
Mitchell

I was a bit down on it seeing it was ‘just’ a slight upgrade in resolution, etc., not a full blown upgrade.

Tried it anyway, just to say I have, and maybe play a couple of levels for old times sake. Ha! As suspected, first couple of levels and man… it’s aged, eh? Still, was a good game back then and it deserves to be kept relevant I suppose.

So… Why on Earth can I not put it down then?

I’ve had an absolute blast with it, running through the original campaign and then onto the add-ons. Both original packs are great so far.

The fast-paced combat and tactics are reminding me most of – oddly enough – Doom 2016/Eternal! There’s a feel, the pace, the mechanics, are very, very similar. For such an old game that’s a heck of an accomplishment.

Showed my kids the deathmatch and… we had such a laugh running round with rocket launchers, despite their initial scrunched faces at the look of it.

Great game, even today. I’d be well up for a full-on update with today’s tech used to the full.
Pugmartin

Streets Fighter
Reading the letter yesterday about beat ‘em-ups and what can be made of them and their characters, got me thinking about something I’ve been wanting to see for a long time now. It is a Street Fighter roaming beat ‘em-up. The idea is you play Ryu and you roam the world as he does in all his story arcs, kind of like the tale of souls and swords from Soulcaliber but with actual locations to explore – towns, cities, and the surrounding countryside.

People to meet, quests to pick up, all involving a fight, on a 2D plane, like an actual Street Fighter fight. You could have new sets of moves, old characters to meet and battle, kinda like a mini-boss. You’re exploring India, you know you’re going to come up against Dhalsim at some point, or North America for Ken and Guile. I want to meet old martial arts masters or ex-military men who can train up your fireballs or Dragon Punch, I want to Hadouken a cliff side until it cracks in two or Shoryuken a waterfall until I part the waters and all the beavers scatter!

I want to Hurricane Kick opponents into bikes and boxes for extra damage, I want to meet and beat Blanka in a rain forest and then have a coffee with him while we recover our health and have a little chitchat. Ohh, Inbox magic.
big boy bent

Infinite compromises
Unless it’s confirmed otherwise on Wednesday I think it’s pretty obvious Halo Infinite has been delayed. Whether that’s because they just don’t have enough time or something is fundamentally wrong with the story campaign I don’t know but at the moment I’d be more worried if it was coming out this year as I can only imagine the amount of compromises, including bugs, that would be needed for that to happen.

If they can get the multiplayer out this year then fine, that’s something at least. I’d go with that and just make sure that each of the other components are perfect. We do not need a Halo that’s either broken or flat out bad. We’ve had both in recent years and it did not do the franchise any good at all.

Apart from anything else, I cannot see 343 surviving this if things go bad. They’re bad enough as a second rate Bungie, let alone a third rate one.
Iceman

Game over, man
Nice review of Aliens: Fireteam Elite, which was just as bland and pointless as I was expecting. I agree with you also that, much as I love it, Aliens just isn’t relevant anymore. Like you said, why have a game with just aliens in it, even if there are minor variations, when you could make up your own that had much bigger differences between enemies? There’s just no point for a publisher, especially as they have to pay for the licence before they even start anything.

The only genre I can see it working with is a survival horror, which Alien Isolation proved can still work. That game had its problems but it was scary, which the xenomorph hasn’t been in films since, well… Aliens.

You could make a sequel that was more action-packed and it would still be frightening. Just turn the lights off and limit the ammo and you’re golden. Rebellion’s Aliens Versus Predator, for example, was really scary and that was a straight shooter. I don’t see anyone giving it a chance anymore though. This one only got made because 20th Century Fox were doing it themselves and they basically don’t exist anymore.
Mahoney

OG bug hunt
Seeing the Aliens: Fireteam Elite review, and hearing about a Marvel XCOM spin-off game, I wonder why we aren’t looking forward to an XCOM style Aliens game.

It would seem the perfect crucible for the depth, exploration, and tension.

Perhaps this would be too close to Space Hulk for Games Workshop to be happy with.
Matt Kirk

GC: Considering how much of Warhammer 40,000 is inspired by Aliens, that’d be rich.

Re-Enter The Matrix
Came across a rumour – well a theory really, since there’s no proof – that Monolith Productions, are working on a new Matrix game. They’re the guys that did the Shadow Of Mordor games and they haven’t announced or done anything now for four years. The only clue as to what they’re doing is a job ad that says ‘open world sci-fi game’.

Now, that could be anything but add in the fact that there’s a new Matrix movie coming out soon and WB almost only ever make games based on IP they own? I think it sounds pretty likely. And if it’s not it should be.

We never did get a decent Matrix game, despite all the hype at the time, and I’d love to see a modern interpretation of it. Bullet time has become a video game cliche purely down to that movie so it would be only fair to give something back and make a good movie. Open world sounds good to me, especially if you can fly or magic cars up out of nowhere and the like.

To be honest I was never clear on the logic behind what Neo could and couldn’t do in the films but I sure did like the action and would like to see it emulated in a game.
Fester

Inbox also-rans
So are Bungie just not making a Destiny 3? I guess because it’s a game as a service title they just figure they can have it go on forever? To be honest, it just feels too complicated to jump into now but I’d be interested if they started afresh with a new one.
Blue

GC: Bungie have plans for expansions that go into 2023, so it’s not happening any time soon.

Cloud gaming on Xbox One is pretty cool, no doubt. But I have to say that the service at the moment, or at least last time I tried it on my phone, was pretty bad with a lot of lag. I don’t know what fps it was, but it seemed to be in the minus numbers at some points.
Crispen

This week’s Hot Topic
The subject for this weekend’s Inbox was suggested by reader Simon Ashworth, who asks what video game reviews have you disagreed with the most over the years?

It can be one of ours, or from another source, but which one sticks out to you as being either too harsh or too lenient? What score would you have given the game in question and what elements do you think the review was wrong about and why?

In general, how accurate do you find the reviews you read to be and how important are they to your decision to purchase or play a game? What’s the best example of a review putting you onto a game you didn’t think you’d like or helping you avoid a game you later found out was no good?