Genshin Impact's Hangout Events give us precious extra time to spend with its lovable cast of four-star characters. Experiencing snippets of their day-to-day lives, small wishes, and troubles; it's entirely in our hands how the mini-journeys we take alongside them go. So we get to act chummy, be stand-offish, be a fantastic friend or even choose to be a horrible one, that leads our companions straight into trouble. All this through diverging dialogue-branched options.

From hilly cliffs, to grassy plains or city streets; in a myriad of situations graced with humor, touched by tragedy, and swept by the more guile arts of subterfuge and decorum, Hangouts are uniquely enjoyable with achievements, small amusements and rewards to walk away with. Still, we've taken the time to rank them out on which of our Hangouts brought the warmth and depth and fuzziness we were looking to experience in our newly-formed friendships the most.

12 The Deaconess And Knight – Barbara 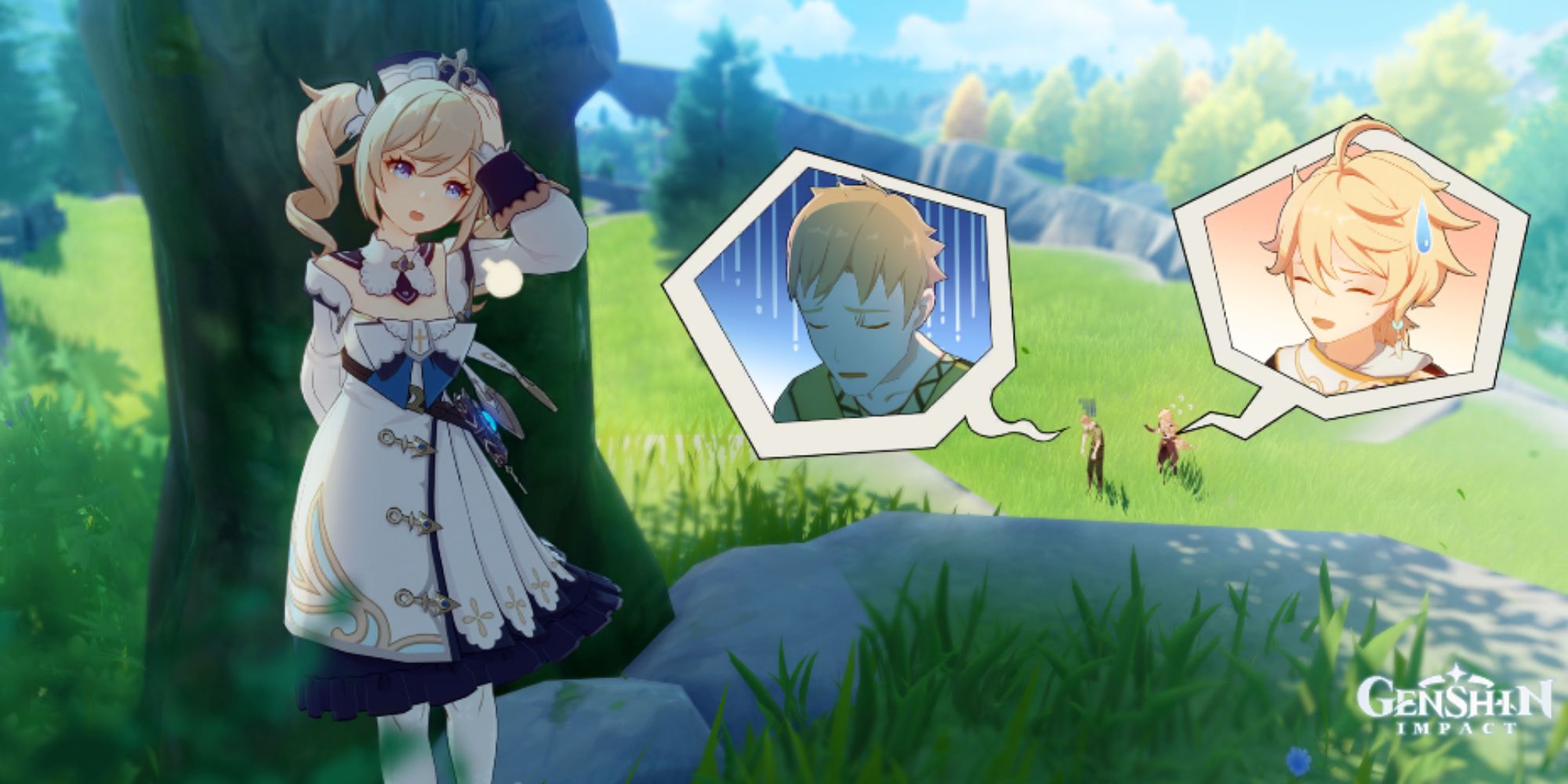 Barbara, who heals others, is in dire need of some healing and rescue herself. We hear about her fan-club here-and-there throughout the game, but here in her Hangout, we really get the chance to see just how fanatic the ones who love her so much can be. It's up to us to appease her worries and give her a well-deserved break. Unfortunately, getting to that treasured break is hard.

While the day is easy-going, and mostly spent running small errands, deterring her fan-club, ingredient-hunting and fending off Treasure Hoarders – it's far, far too easy to say something wrong to her and end the Hangout immediately. Compared to the other character events where there is more freedom to explore the dialogue options and take different routes in the story, in Barbara's if you try and suggest something different from her plans, you'll either lose hearts or fail. 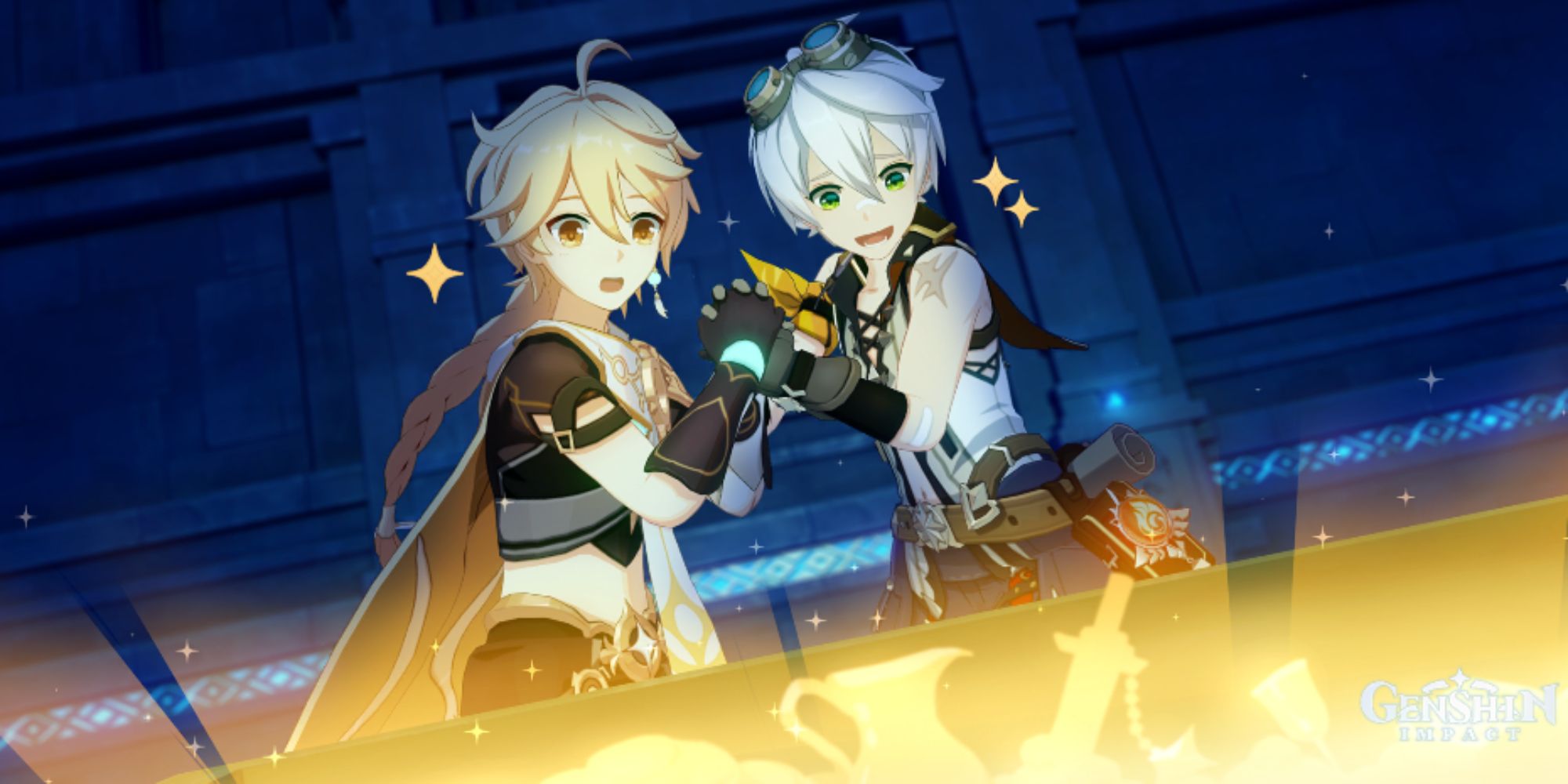 Bennett is a sweetheart and we love him. His Hangout only gives us more chances to see how earnest and optimistic he is, as we accompany him on the path to great fortune or worse misfortunes. On the day of small journeying, we witness his mishaps first-hand and catch glimpses of his insecurities and loneliness, and it makes us want to cheer him up.

But through all the trouble, his adventurous spirit and never-give-up attitude are infectious, bringing the best of feelings. The only downside is that his event is one of the simplest and shortest of them all, with the routes to endings straightforward, and easy to achieve. It leaves us wanting so much more. 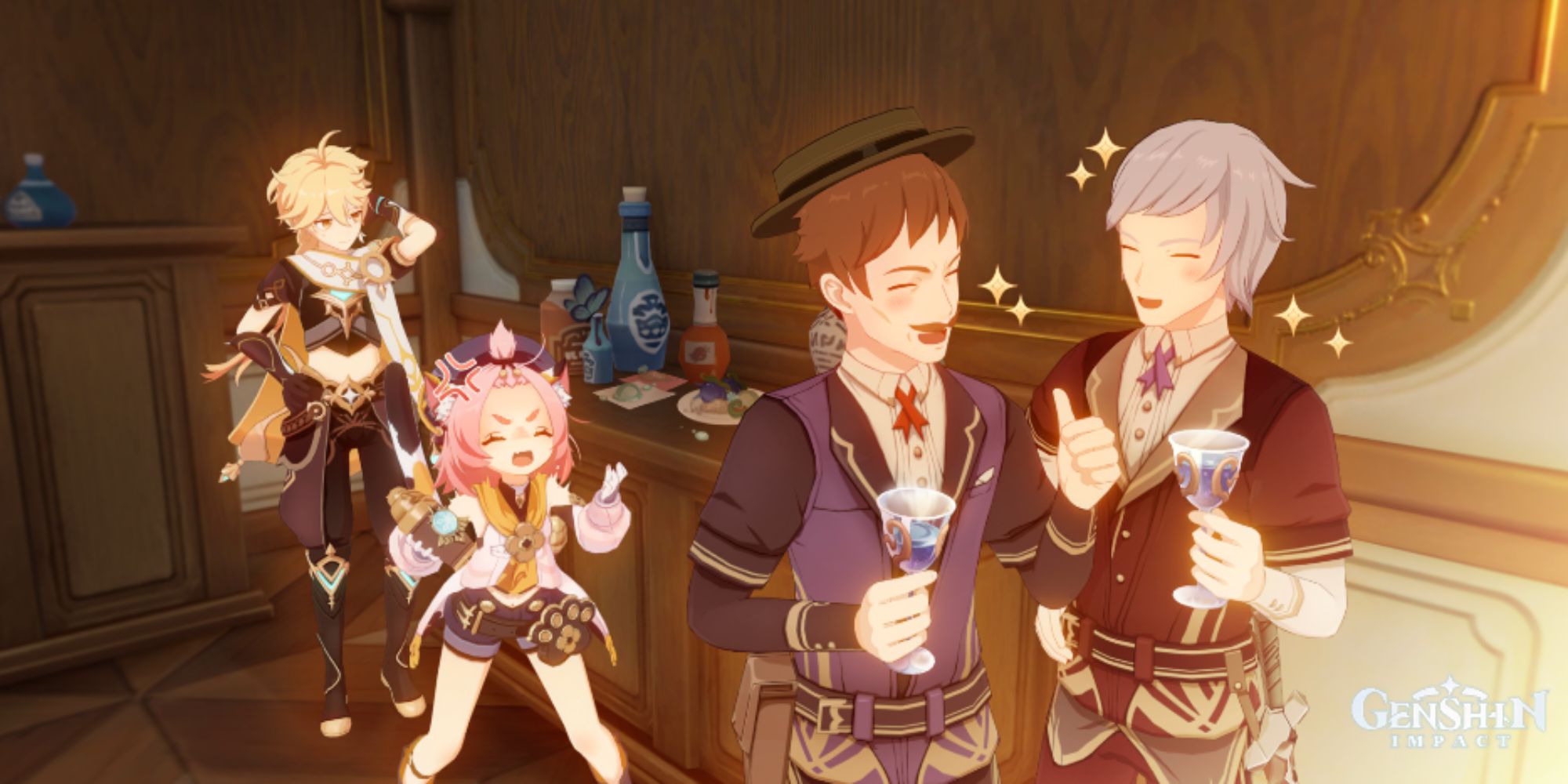 Diona's plans for the downfall of Diluc's wine industry are always in motion and in her Hangout, it's no different. Cat-hunting, drink-mixing and a little rescuing – we follow her attempts to deter us and others from the path of alcohol-indulgence. The hijinks at the Dawn Winery truly steal the show.

One of her endings is tricky to get, but just like Bennett's, the rest of her branches tend to follow a linear route with little deviation and next-to-no errors you could make that'd have you starting over. All-in-all, a wholesome event full of familial and friendly feels with a fun character we really don't get to see much of! 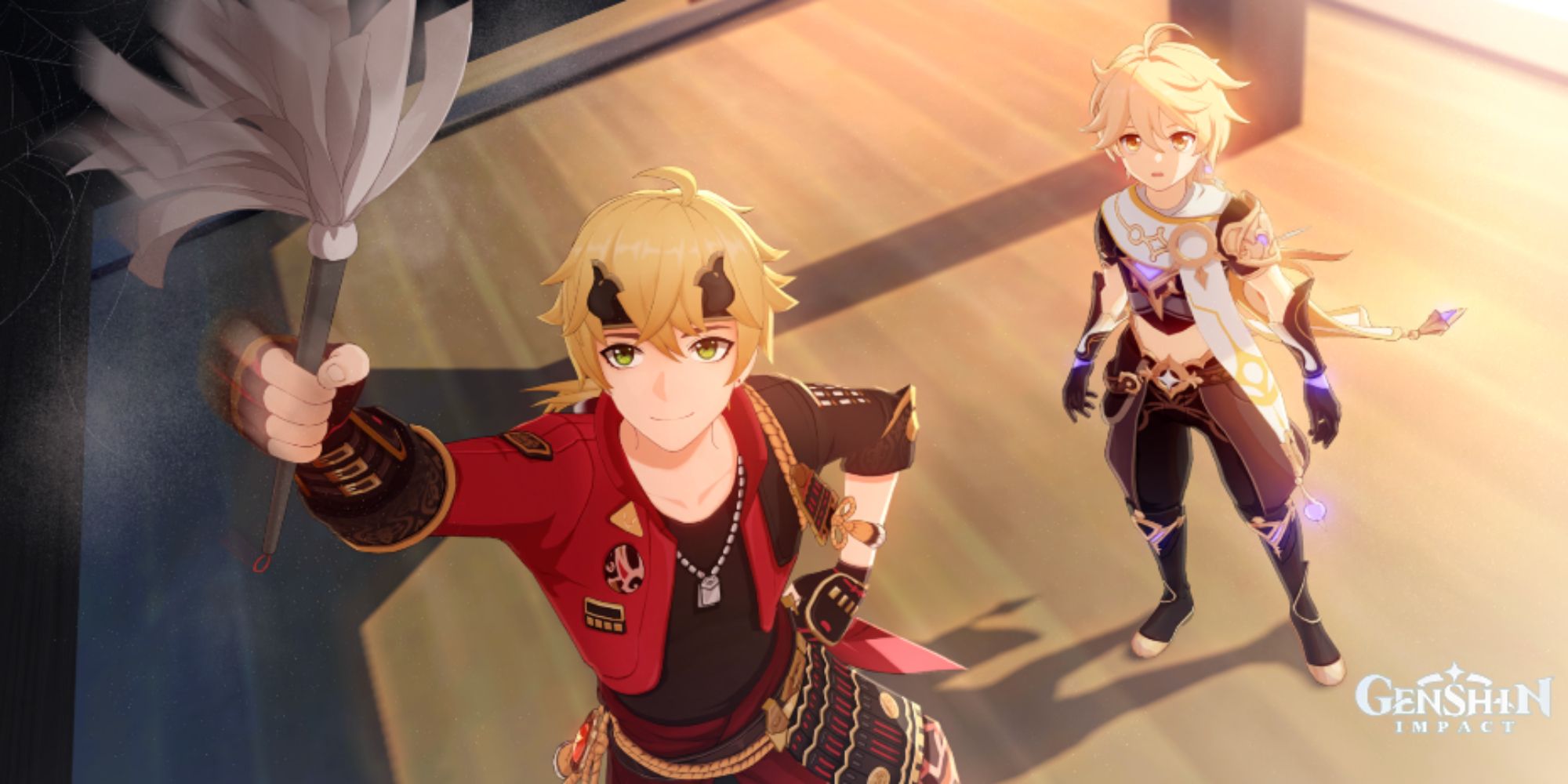 Thoma is a real, true housekeeper of the Kamisato Clan and an extraordinarily capable member of the Yashiro Commission. Now hanging out with him might not be full of wildly humorous antics or harrowing adventure, as he's a pretty chill fellow, but we are graced with the gloriousness of his cooking and mentoring skills, his love for animals, and his level-headed problem-solving.

There are no complications in the dialogue that make his endings hard to reach, only mixed feelings and a sense of indignation as we attempt to live as he lives, paying no mind to the judgmental people who talk about him behind his back. It's a wonderfully great Hangout that fleshes out his character.

8 Captain Of The Crux – Beidou 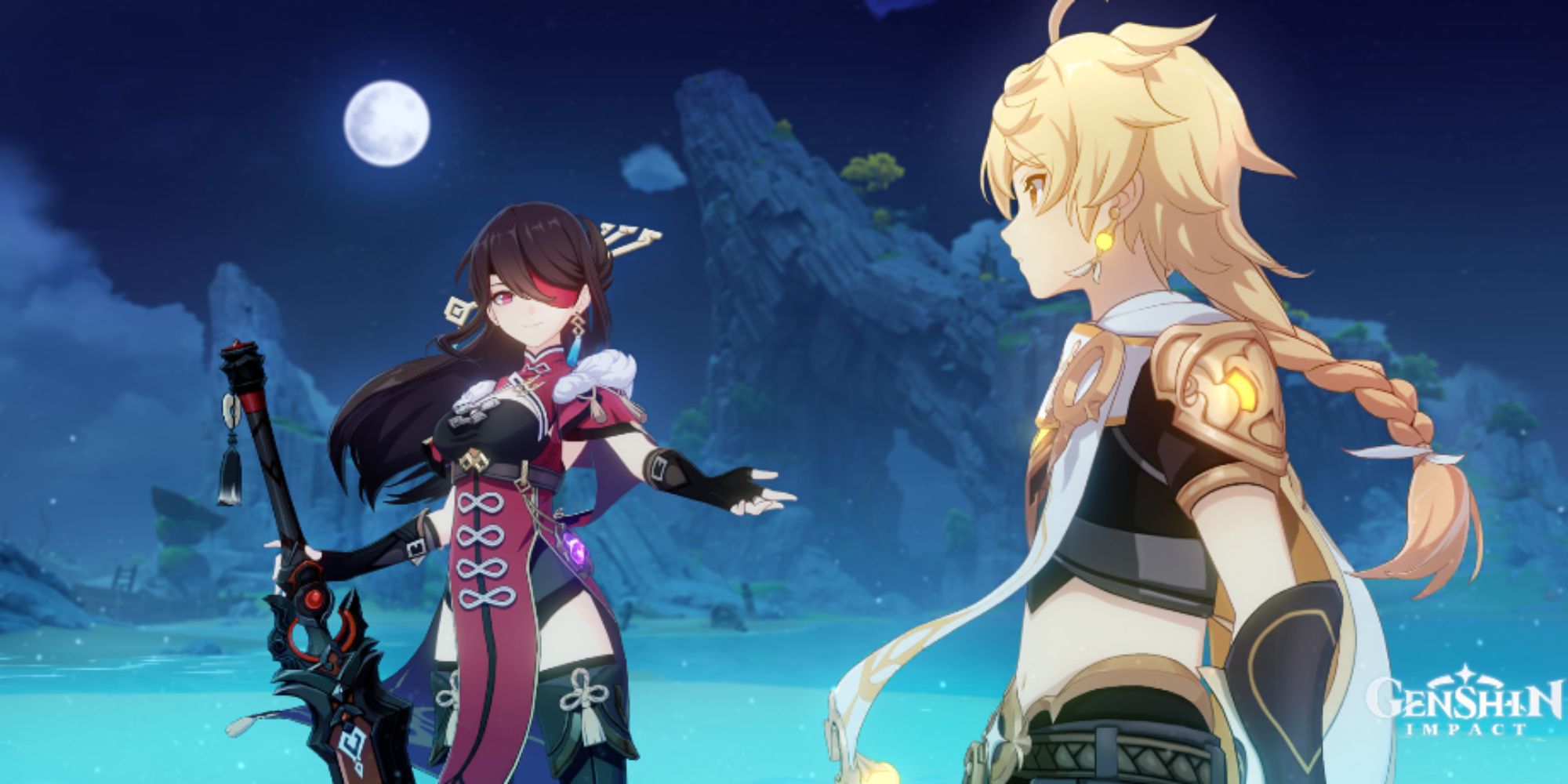 Beidou is respectable, amazing with one of the most stressful Hangouts there is. She enlists us in treasure-hunting, conflict resolution, and shows of the inner-workings of her business operations while teaching us what it takes to be crew member of The Alcor.

Her event is interactive and engaging, with multiple achievements and 'feel-good' moments. But our reputation precedes us, and her expectations of us are high. In an instant, we'll lose hearts for performing subpar in the myriad of small tests she presents. And disappointing her is somehow much worse than being faced with an immediate fail. 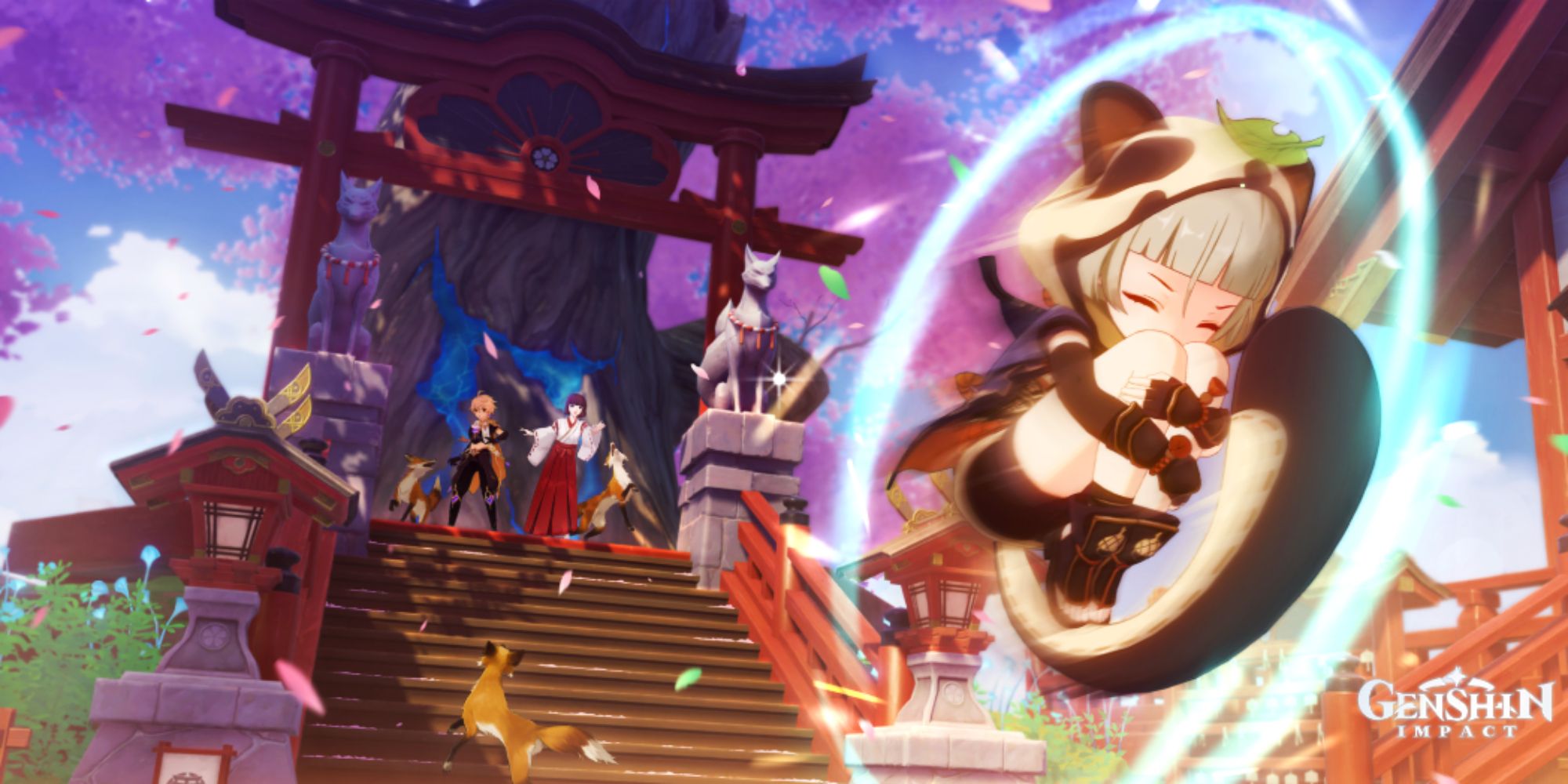 It's always nice to see a blossoming sibling dynamic unfold between characters. Helping Sayu settle her conflicted feelings over her departed sensei, keeping her hidden from Kano the Shrine Maiden, joining her in her ninjustu training, scouting out the perfect spot to nap – we get to do a lot of hanging out with someone sent to assassinate us.

Battles, obstacle courses and sneaking around aside, what's particularly neat about this Hangout, is the fact that the story and all their endings comes full-circle, regardless of your choices, to explain the mysterious order from the Yashiro Commission that wanted to see you dead. 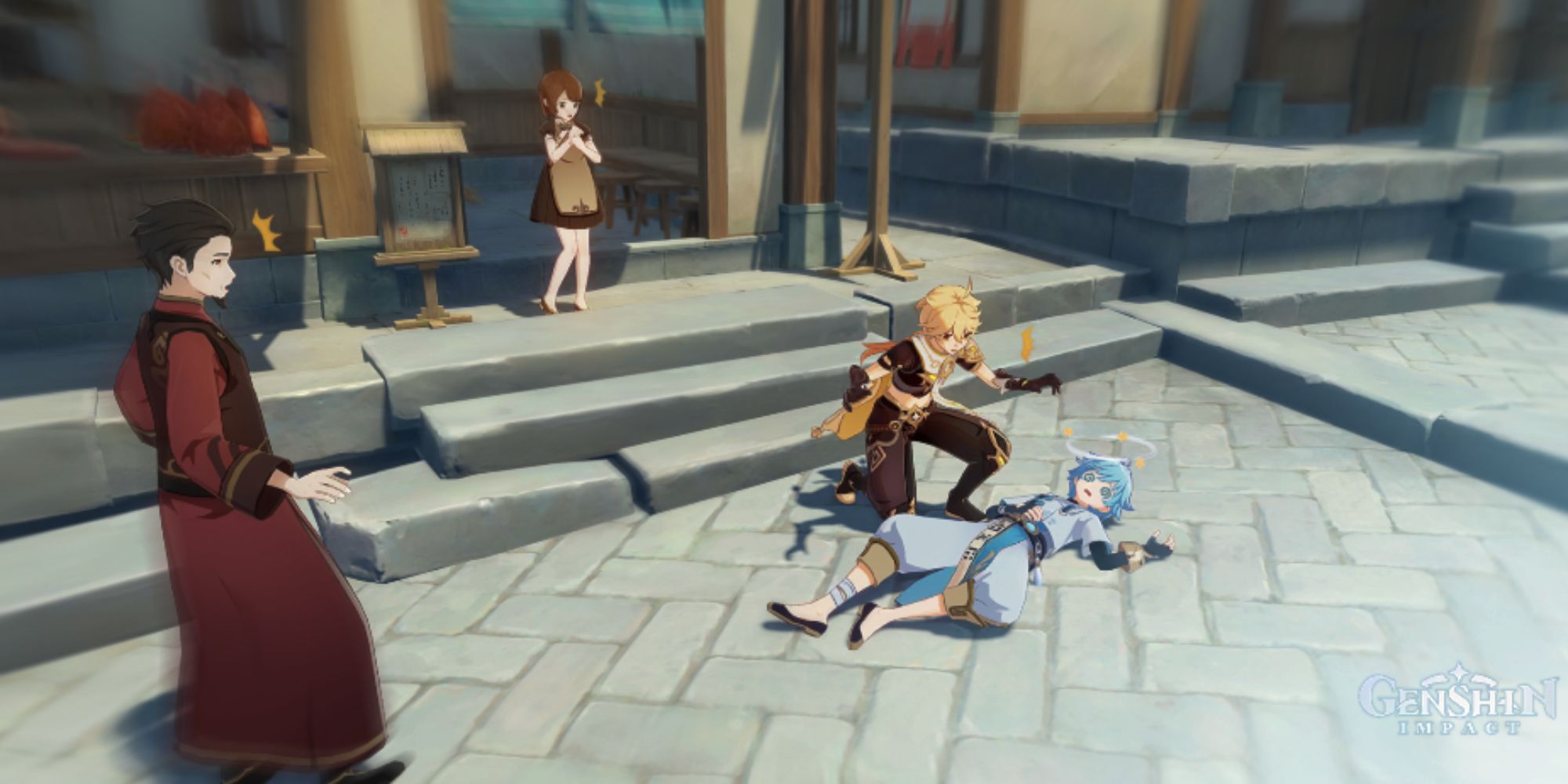 Time spent with Chongyun is time full of lighthearted shenanigans, small misfortunes and endless hide-and-seek, whether between him and evil spirits, employees trying to do their jobs, or children who've fallen in love with the fascinating kind of person he is. It's a Hangout full of mischievous fun, and lets us have a lot of liberty in the path options.

However, it has one of the largest amounts of branches with numerous ones leading to the same exact ending, notably in the Test of Courage route. The experience of listening to the same dialogue again and again, takes away some of the enjoyment as you try repeatedly to get the missing endings you need. Although that dedicated effort is, sadly but hilariously, almost an exact mirror to Chongyun and his own attempts to find the evil spirits he can't see. 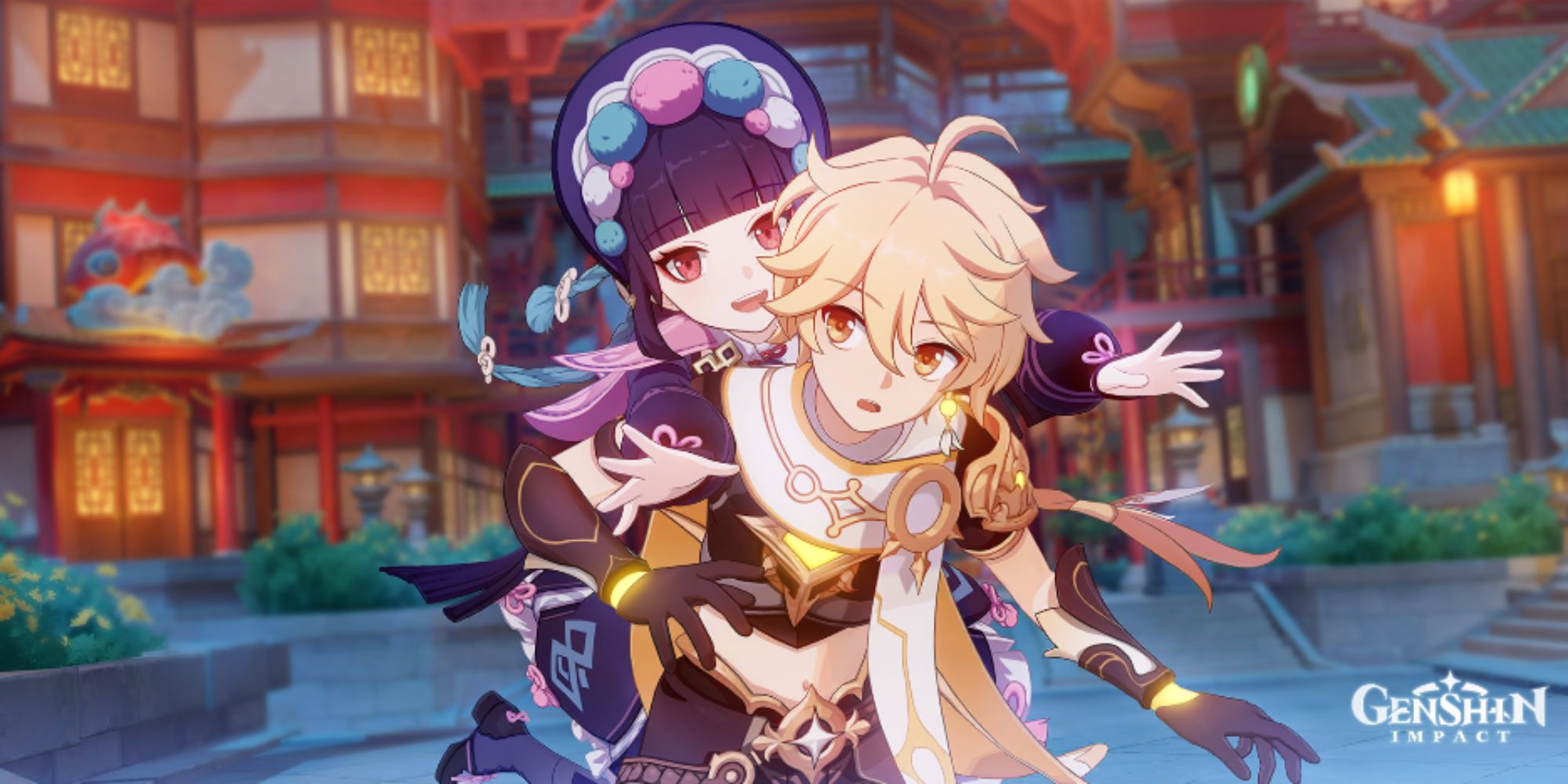 Yun Jin is fierce on-stage and adorable off it, and the choices we get to make allow us to embrace both sides of her personality. A nice outing in Chihua Rock, experimental hot-pot game with drinks, attempts to sleuth after scandal-seeking tabloids and chances to put our nonexistent singing and acting talents to the test, are just a few of the routes available.

With dialogue paths varied and challenges to tackle to unlock certain endings, we wind up with a total sense of satisfaction once we've accomplished the objectives set out for us – and can't help but be drawn in by Yun Jin.

4 All The Riches – Ningguang 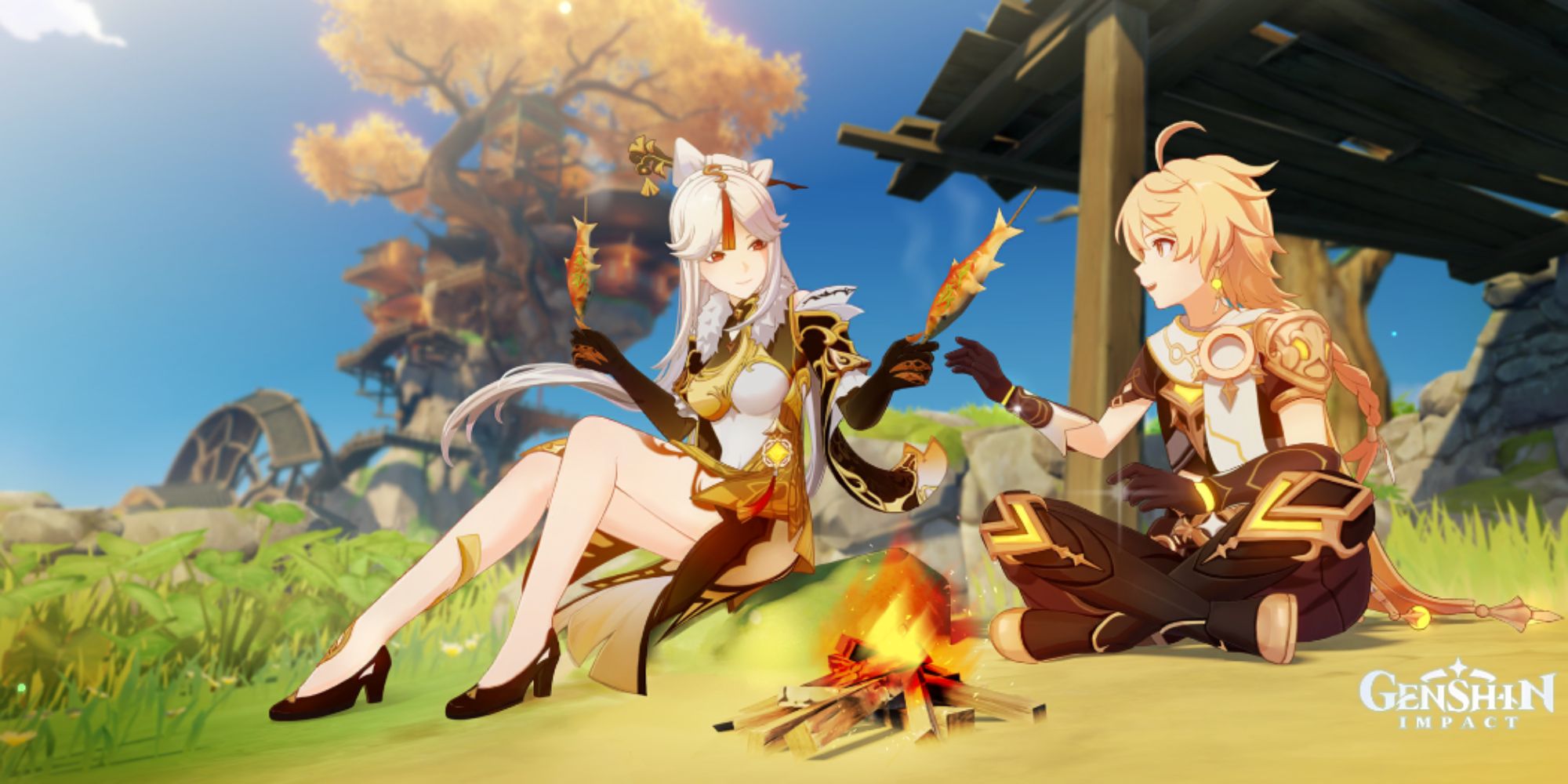 Filling in for Ningguang's secretaries feels daunting at first, but the Tianquan of the Liyue Qixing is incredibly fun once you get to know her. And get to know her, you do, in your adventure as her temporary staff. Her Time Off Path see you both chasing creatures in the dirt for treasure, Ningguang fishing, cooking you a meal, and taking-it-easy. Very down-to-earth, and casual. Her Rigorous Schedule Path showcases her brilliance in economics, investments and clever outmaneuvering of those with less-than-honest intentions.

Two extremely different sides of her are shown, but neither feel out of place, both feel just right, and it's all done with neat nods to events in the main lore and game festivals of the past that occurred, keeping character consistency while developing it, and seamlessly weaving in storyline plot.

3 What Kind Of Knight – Noelle 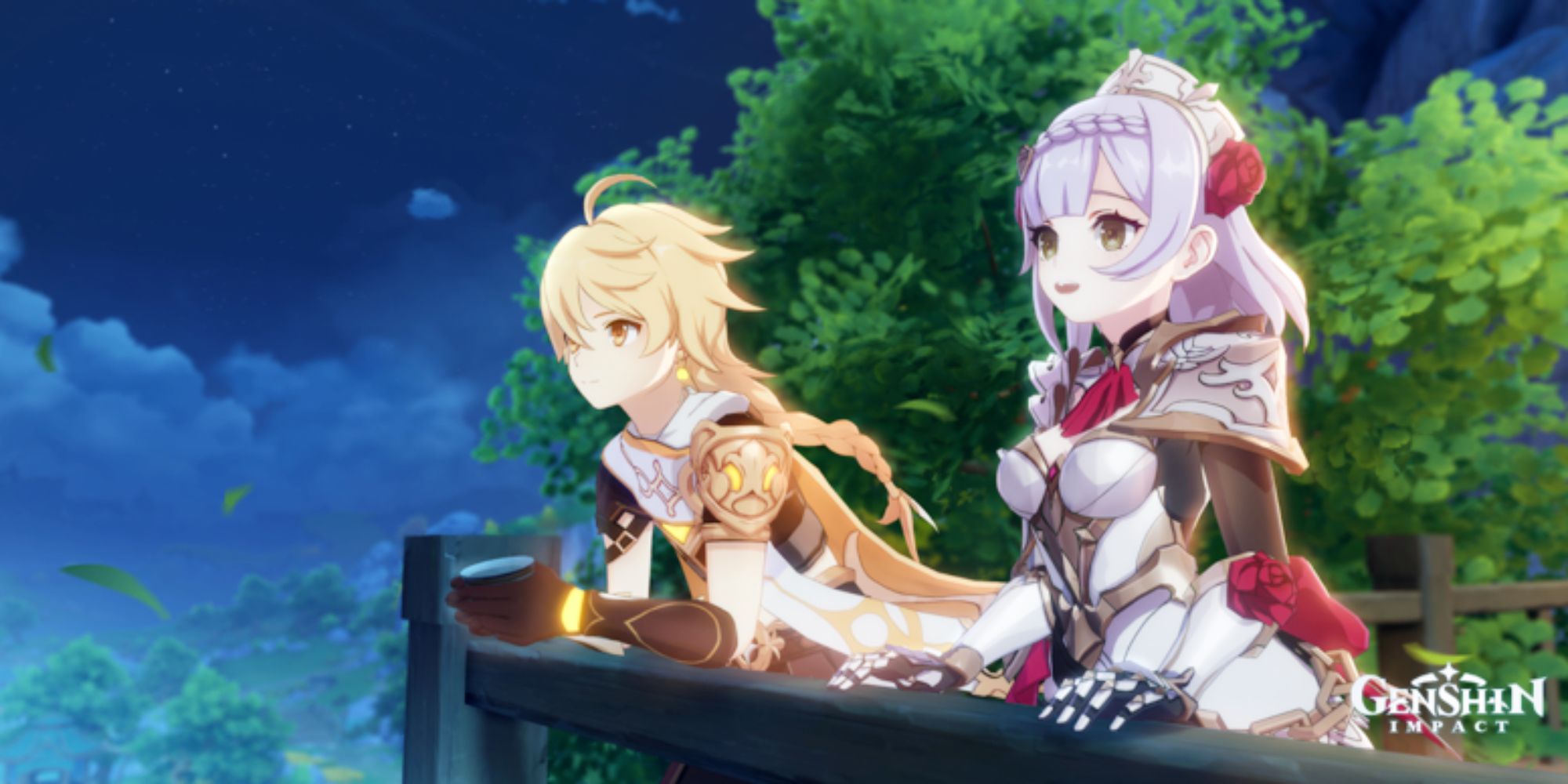 Her first Hangout showed us how invaluable Noelle is to the citizens of Mondstadt. Her second one shows us how invaluable she is – period. Borders and boundaries between nations, status or struggle mean nothing to one with a heart so openly loving as hers, and it's made even more apparent here. Getting to sight-see in Liyue, studying for the Adventurers' Guild Exam, fighting off Ruin Guards, downing drinks and listening to tales – it's a well-rounded series of paths that feels as if we really are there at Noelle's side as a friend – and perhaps as something more.

Rather than the shenanigans her first tale imparted about her dedication and uncertainties, her second has more of a focus on her dreams and what kind of place she'll hold within the Knight Order, and as an individual in general, in the world around her. It brings comfortable warmth, natural companionship and bright hope, leaving very, very good feelings behind when it's done. 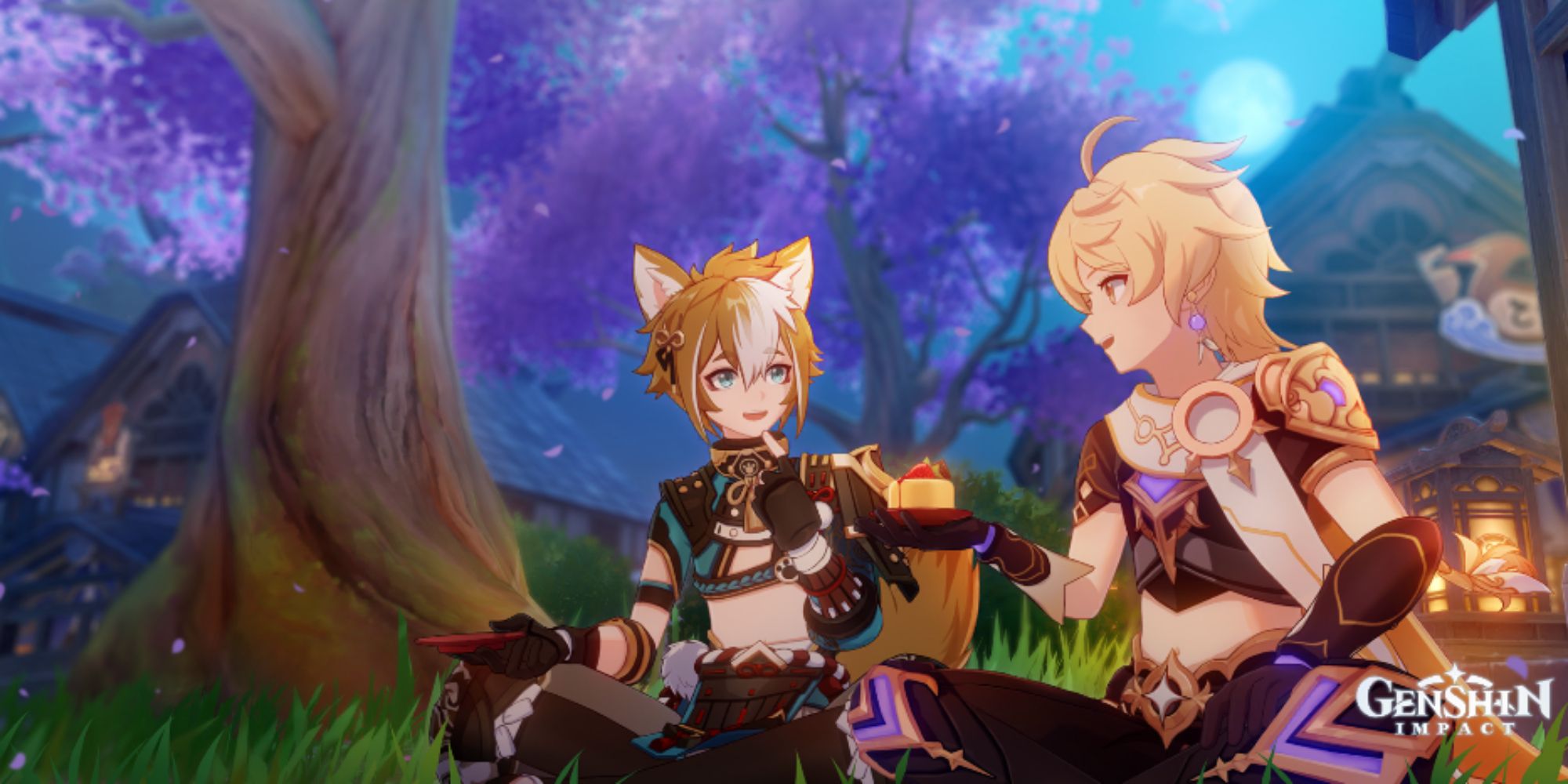 Gorou's Hangout is touching, humorous, well-rounded, and belied by traces of deep dedication, love and remorse, with valuable lessons on comradery, understanding others and learning to let things go. Overcoming his terror of Yae Miko is the driving force behind the sort of day that unfolds, and in the attempts to rectify his own weaknesses or expose her own, we get to see the many lovable facets of the Watatsumi Army General himself.

We also get closure of a kind to several important events that happened in the main storyline, like the Vision Hunt Decree and War. It's easily-digestible content, with high replay-ability, and vastly-differing, yet wholesome endings, that aren't hard to achieve, making the overall experience with him feel gratifyingly nostalgic. 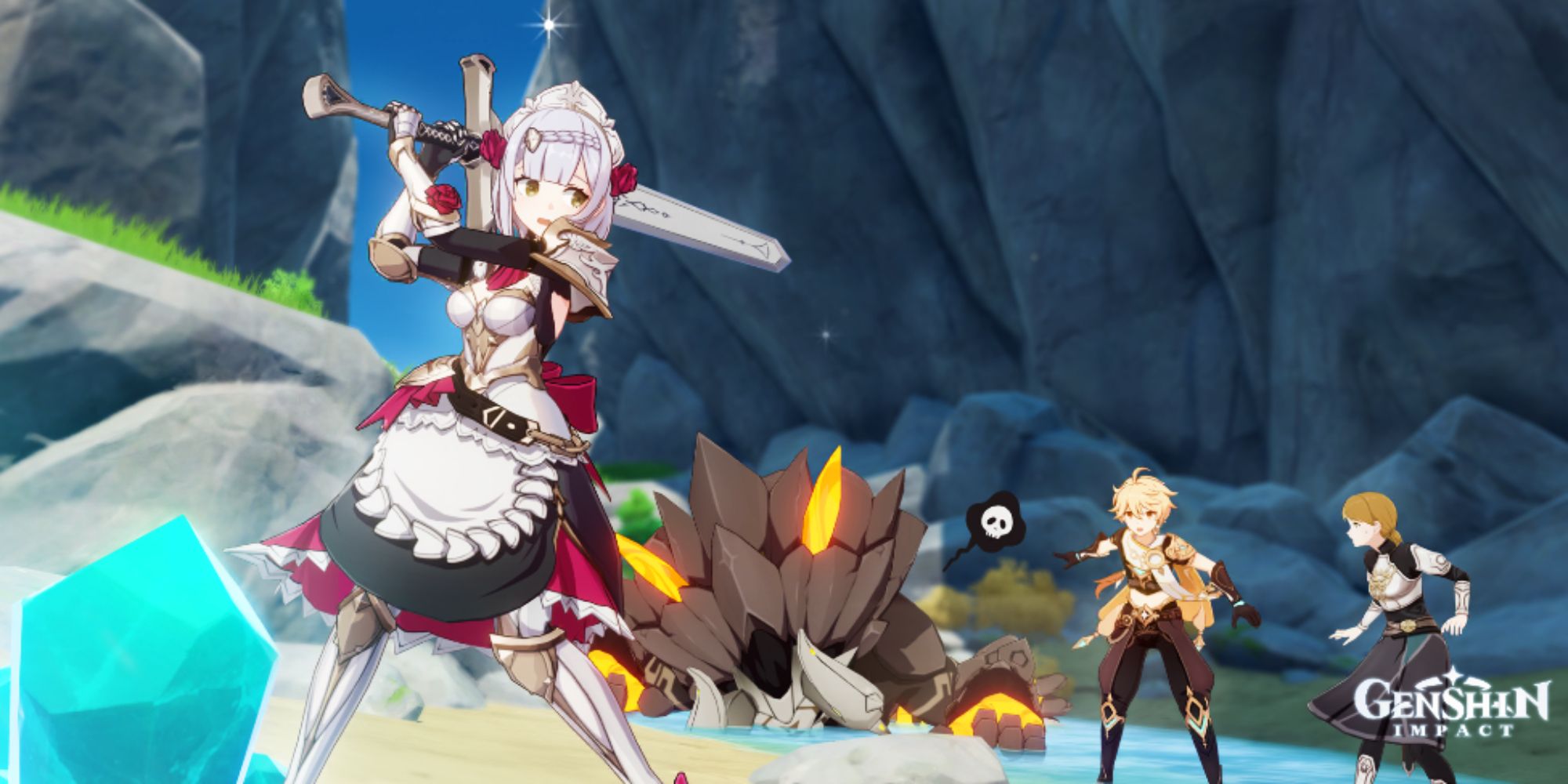 Hanging out with Noelle has to be one of the most consistently, satisfying experiences in Teyvat there is. The maid of the Knights of Favonius does it all and we end up tagging along with her and bearing witness to her great feats of earnestness and strength.

It's the first look we get at Noelle's phenomenal potential to become a Knight ourselves. From love advice, to mining, rescuing, and giving unfortunate 'visitors' hospitable tours around the city, the time spent with her is wholly heartfelt, comedic, and enjoyable.

Endearing characters like Noelle might not play a big role in the Archon Quests or overarching storyline of the game as much as our golden, five-stars often do, but the importance of their existence to others around them is shown fantastically through these events – and reminds us, once again, just how big and diverse the world of Teyvat is.