The world of Genshin Impact is ruled by seven elements and their Archons. These elemental Gods rule over seven different nations that make Teyvat, and there are a ton of vision holders that can manipulate an element based on their vision. These people are known as playable characters in the game.

Nilou is a five-star sword-wielding character who uses a Hydro vision. The Traveler met her for the first time during the Archon quest line of Sumeru, and people were able to witness her beautiful Dance of Subzeruz. She's one of the most detailed characters created by Hoyoverse. 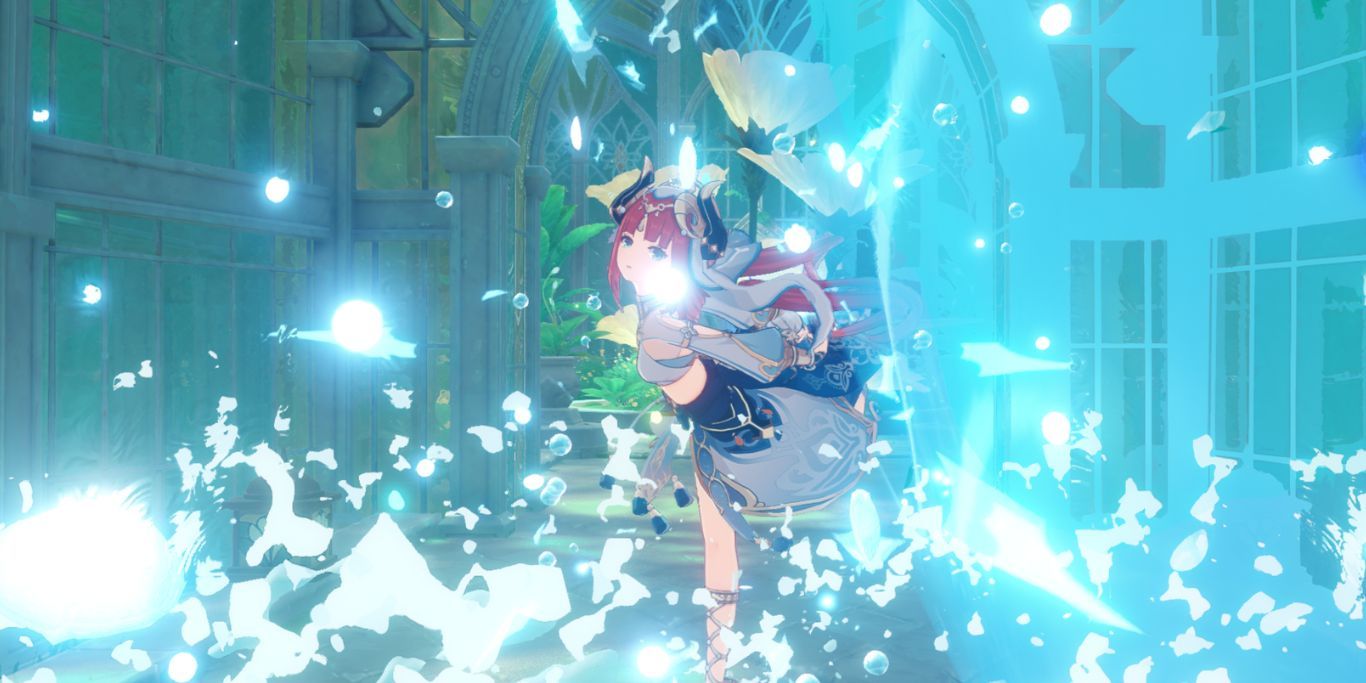 For the amount of detail contained in Nilou's kit, it is surprisingly easy to understand. Her main source of damage is intended to be from different Hydro reactions, especially Bloom. Here are two of her passives that make this obvious:

If you have a character of any other element in the party, or if the requirements for Court of Dancing Petals aren't met, both of these passives become completely useless. This is the detail that makes Nilou niche yet powerful in a certain scenario.

Bountiful Cores created when Nilou is in the party explode almost instantly, and they have a larger area of effect. With this build, her main damage output will be these cores, and you'll be surprised by the amount of damage they can deal at quite a fast pace.

The key of Khaj-Nisut is her signature weapon, and it fits this build perfectly because of the following effects:

Elemental Mastery is the stat that determines how much damage will be dealt by your elemental reactions. With her passive and this weapon, you can get over 500 EM extra in an ideal scenario, increasing the Bountiful Core's damage massively.

Since this is a limited weapon and most of the free-to-play or low-spending players won't have access to it, Iron Sting can be a good replacement for it. This weapon gives up to 165 Elemental Mastery as a secondary stat and also increases your DMG whenever you hit an enemy with Elemental DMG.

As for the artifact set, the four-piece Gilded Dreams is the only choice for this build. Ideally, you'll have two Hydro and two Dendro characters in a team with Nilou, and this set will give you around 180 extra Elemental Mastery for this team composition.

While it makes two of her passives useless, the Vaporize potential from Nilou's constant Hydro application cannot be ignored. She can have the Hydro element applied to enemies near her almost all the time, making it a viable option to put her with Yoimiya, Hu Tao, Diluc, or Yanfei.

For this reaction, you can also use Freedom-Sworn as the weapon and Noblesse Oblige as the artifact set. These will buff the ATK of your Pyro character who will trigger Vaporize with the help of Nilou. 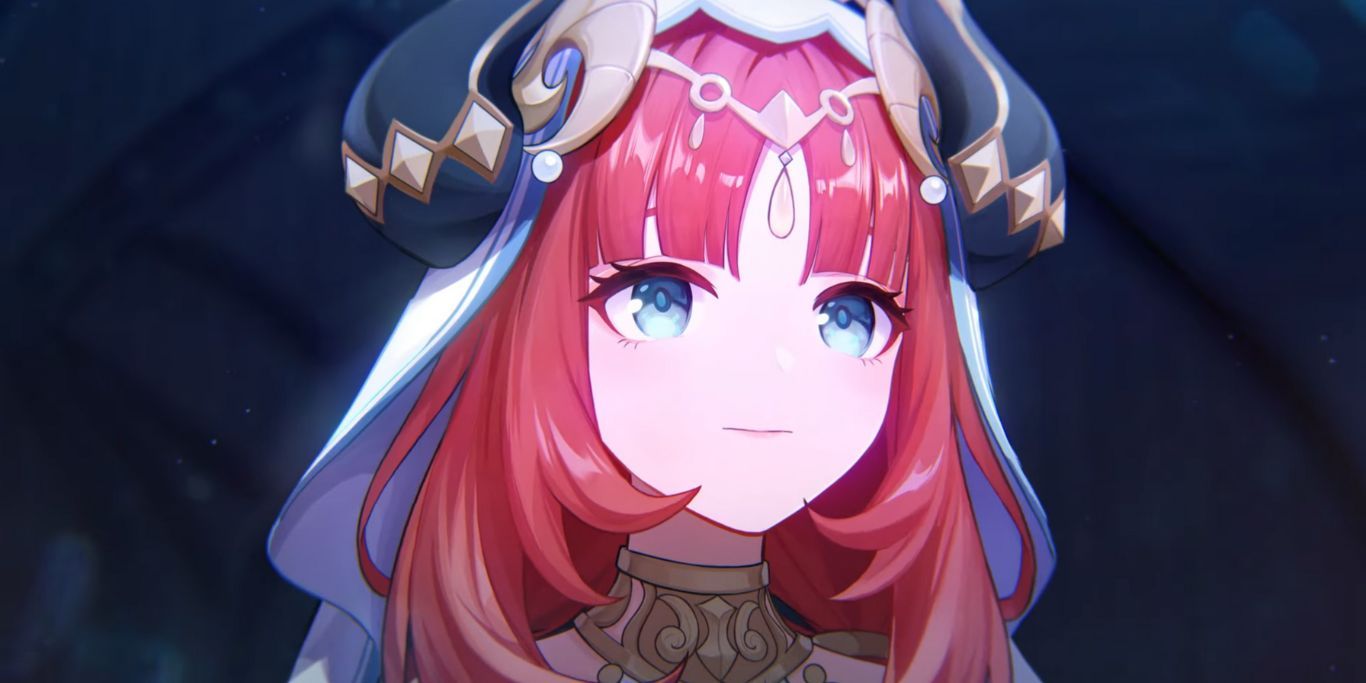 Nilou's lore, personality, and kit are one of the most detailed out of all the characters in Genshin Impact. Due to this, there may be a lot of people who don't want to put her in the back line as a supporting character and use her as the main damage dealer instead.

While it's not her intended style, the broad weapon and artifact choices in the game make it possible. There are two instances of Nilou's Elemental Skill, and you can infuse her weapon with Hydro in one of them. This will be the main damage output when you're using this build.

Your third dance during her Elemental Skill will determine which instance takes place. If you press the Elemental Skill button as the third dance, you'll get a flower around the active character that will deal regular Hydro damage.

On the other hand, performing a basic attack as the third dance infuses her weapon with Hydro for around eight seconds. The first two dances don't matter, but you should always use normal attacks for them because they have higher damage.

Here are the reasons for all the weapons mentioned above to be decent on her with this build:

Once you've decided on your weapon, it's time for the artifact set. Unfortunately, there's no four-set piece that suits this play style completely on Nilou, so the best one to go for is a two-piece Heart of Depth and two-piece Tenacity of the Millelith for extra Hydro DMG Bonus and HP Percent.

You can also use the four-set piece for Shimenawa's Reminiscence if you want her to deal higher damage on her Elemental Skill, but you won't be able to use her Burst. This makes Mistsplitter Reforged a less viable option for the build. 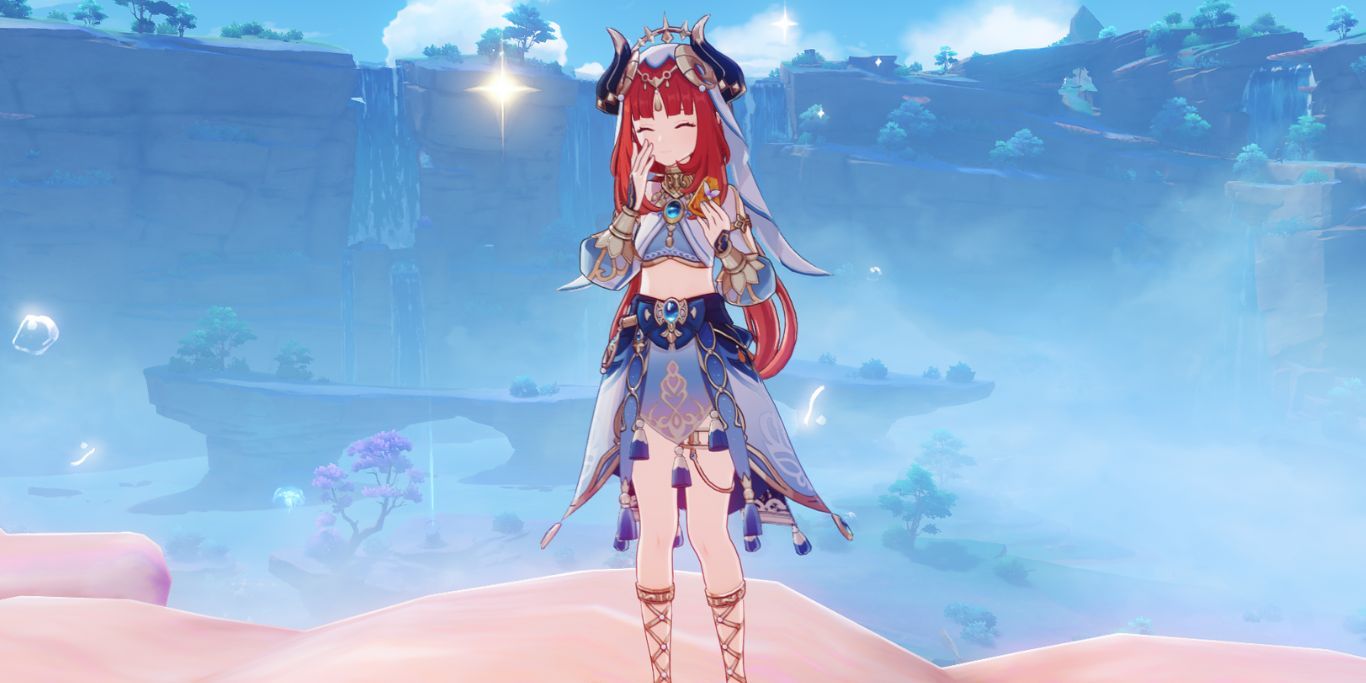 From talking about not using her Burst, to using it all the time. Nilou can easily have up to 50,000 HP once you have her built. Her Elemental Burst scales on her HP, and it has quite a high number in both of its damage instances. This build is not the most efficient, but her Burst has a beautiful animation that makes it worth it.

Both the weapons and the Emblem of Severed Fate artifact set make it easier to get her Burst back. Furthermore, the artifact set also gives you a higher Elemental Burst DMG based on your Energy Recharge.

Nilou's Elemental Burst costs 70 Energy, and you'll easily be able to get it back through her Elemental Skill if you're using this build. It's recommended to use a Pyro applicator like Xiangling before using your Burst, so you can get extra damage with Reverse-Vaporize. 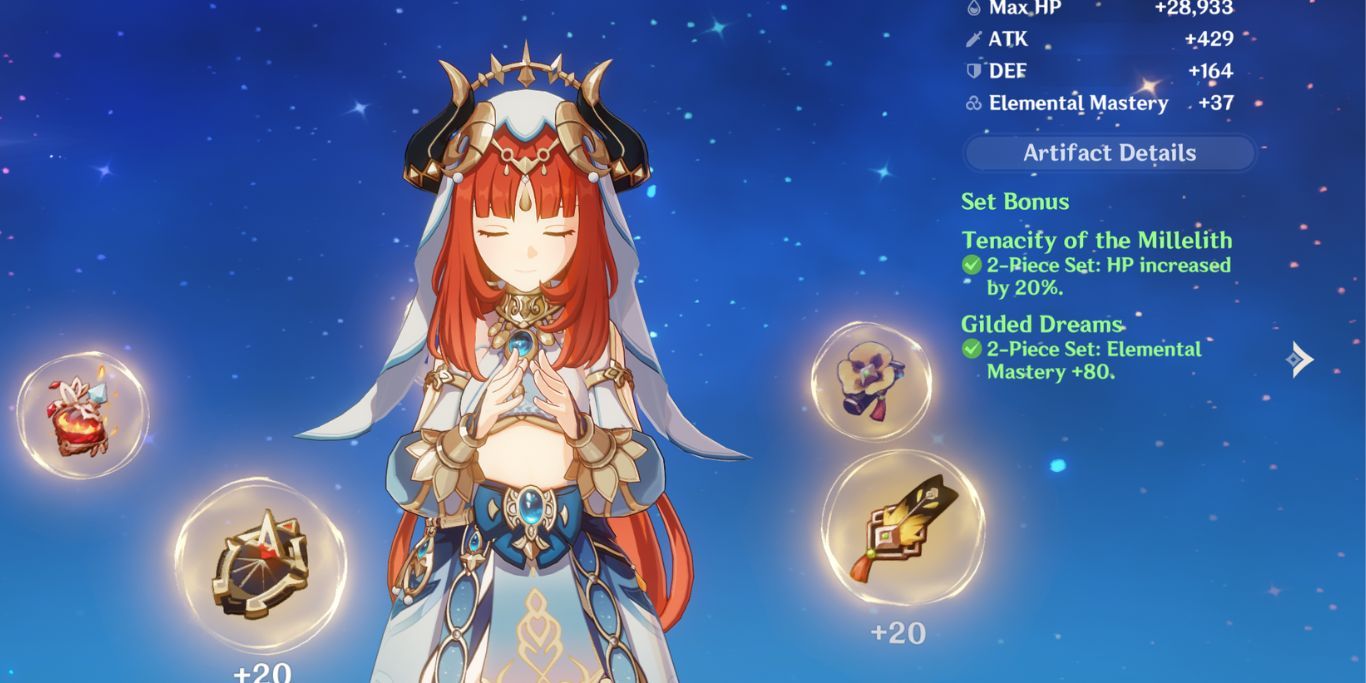 No matter which build you're using, Nilou's artifact stat priority remains the same. This is because you'll get most of the Elemental Mastery or Energy Recharge in the respective builds through the weapon and the set bonus itself. Here are all the stats you should be looking for in your artifacts:

If you're going for the main DPS build without her sixth constellation and the five-star weapons mentioned, you can also try replacing your circlet's main stat with Crit Rate or Crit DMG. 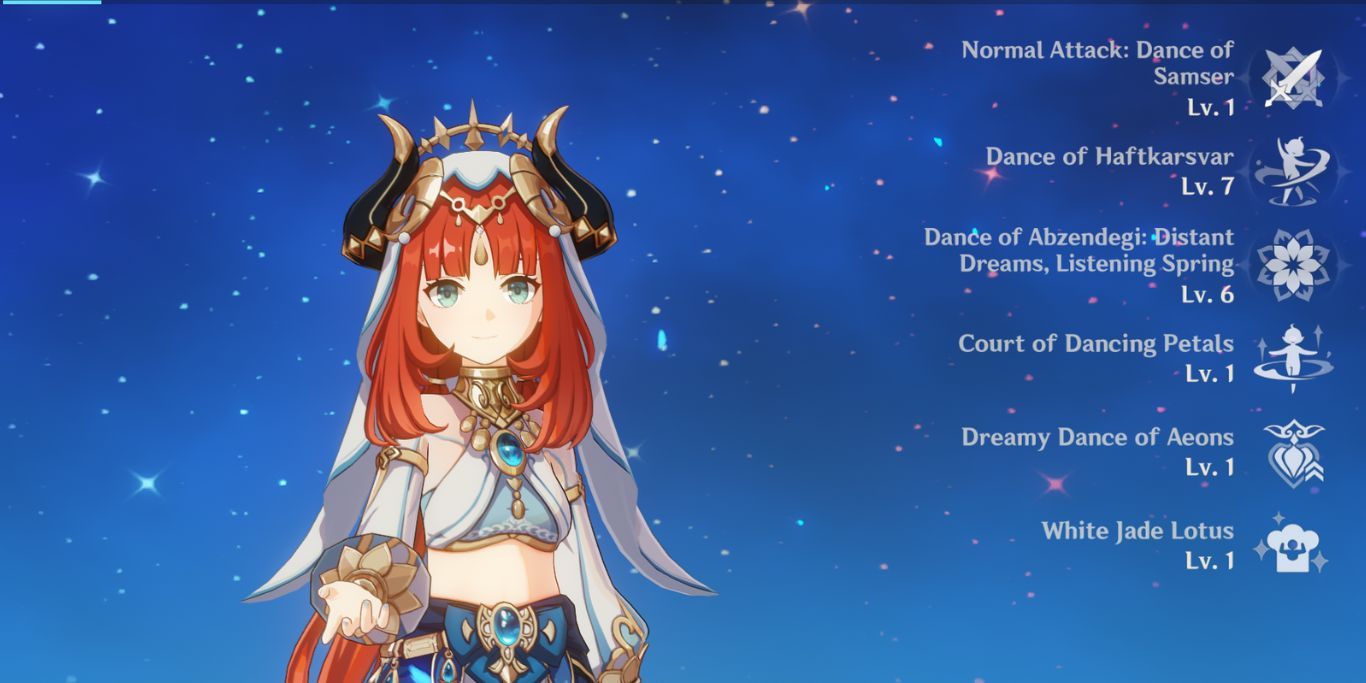 For most builds, you'll be looking to upgrade Nilou's Elemental Skill first. This is because it deals the most damage out of all her talents, especially if you use the basic attack instance. After that, you can upgrade her Elemental Burst to your desired level.

It is useless to level up Nilou's Normal Attack talent for quite a few reasons: 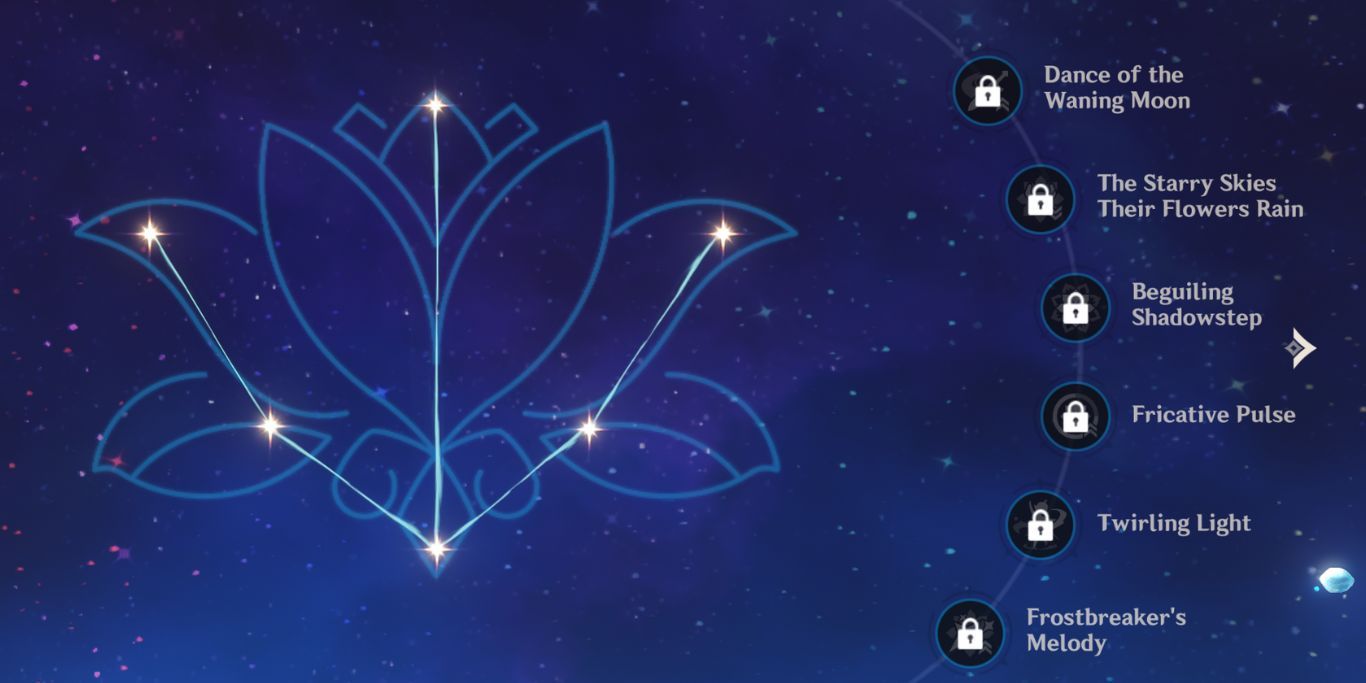 Just like every character, Nilou has a set of six constellations, and here's what they do: