Yaoyao is Genshin Impact's first Dendro healer. Naturally, her healing scales off of HP. Having her in your roster opens up a lot more possibilities for Dendro teams than ever before. Her best role is as a support since she doesn't do much damage by herself. But having healing and Dendro reactions wrapped into one character saves you a slot in your team.

Whether you play her as a support or something else, you have a lot of options to choose from in terms of weapons. What weapon you give her determines what she'll prioritize between healing, attack power, and reactions. 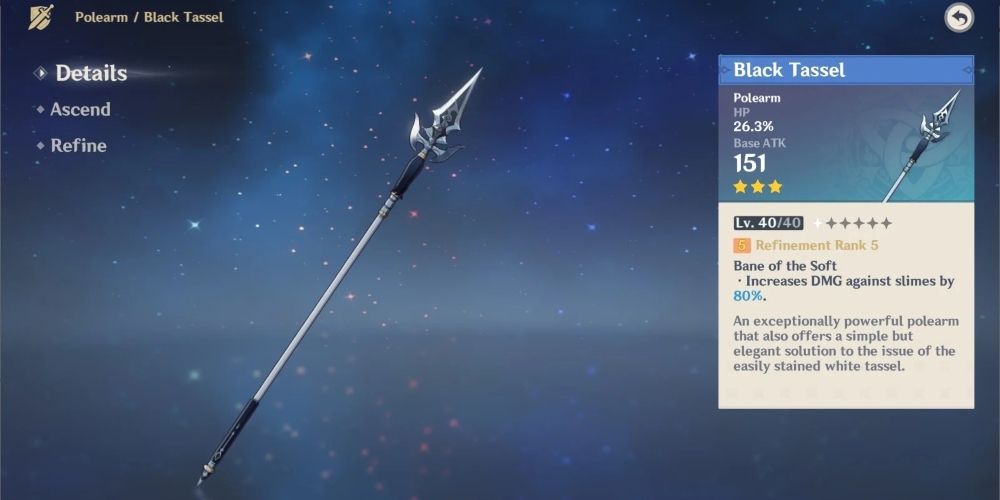 Black Tassel is the only polearm that has HP as a main stat. Being a three-star, it's a cheap option for boosting Yaoyao's healing. If you don't have good HP artifacts, you can use Energy Recharge ones instead and have her wield Black Tassel. It gives her an extra 10.2 to 46.9 percent increase in HP, depending on its level.

The only downside is that its passive isn't terribly useful, as it just increases DMG against slimes by 40 to 80 percent, depending on its refinement rank. You'll probably have at least one DPS on your team who can wipe out slimes quicker than Yaoyao can. Still, the weapon can be worth it for its main stat alone if you want her to heal more. 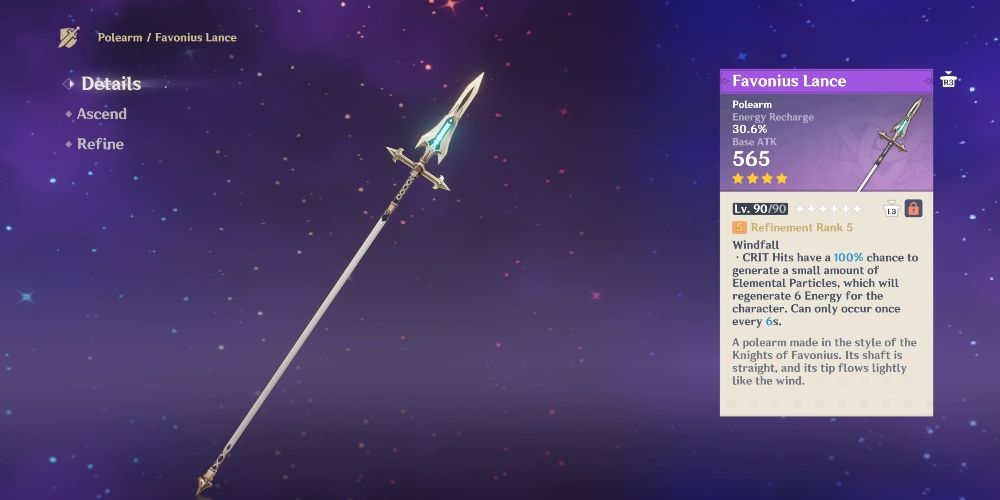 The best of Yaoyao's healing comes from her Elemental Burst. Unlike her Elemental Skill, it heals the whole team, making it super useful in a pinch. To be able to rely on it properly, you'll need a good amount of Energy Recharge, which is why the Favonius Lance is a good option for her. It gives her a six to 30.6 percent increase in Energy Recharge, depending on its level.

Its passive gives a 60 to 100 percent chance of generating energy particles when Yaoyao gets a critical hit in. However, the good news is that doesn't mean you need to focus on her CRIT Rate too much. Her Elemental Skill and Burst have her cute little companion hitting enemies for her, so you can take advantage of the passive even when you're just running around. 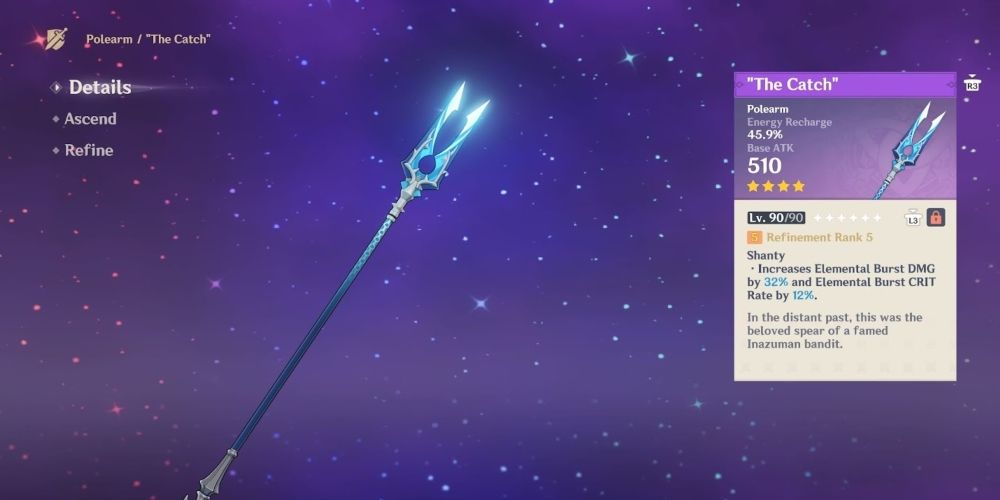 If you're okay with fishing, The Catch is a great free polearm in general, and Yaoyao could definitely utilize it well. It gives a 10 to 45.9 percent Energy Recharge depending on its level, which covers most of Yaoyao's Energy Recharge needs. Its passive also gives her Elemental Burst a damage boost, increasing its DMG by 16 to 32 percent and CRIT Rate by six to 12 percent depending on its refinement rank.

The only caveat to using The Catch on Yaoyao is that you can only have one of it, and it's usually better used on characters who are more DPS-focused in their Elemental Bursts, like Xiangling or Raiden Shogun. But if you really like using Yaoyao, it could be worth it. 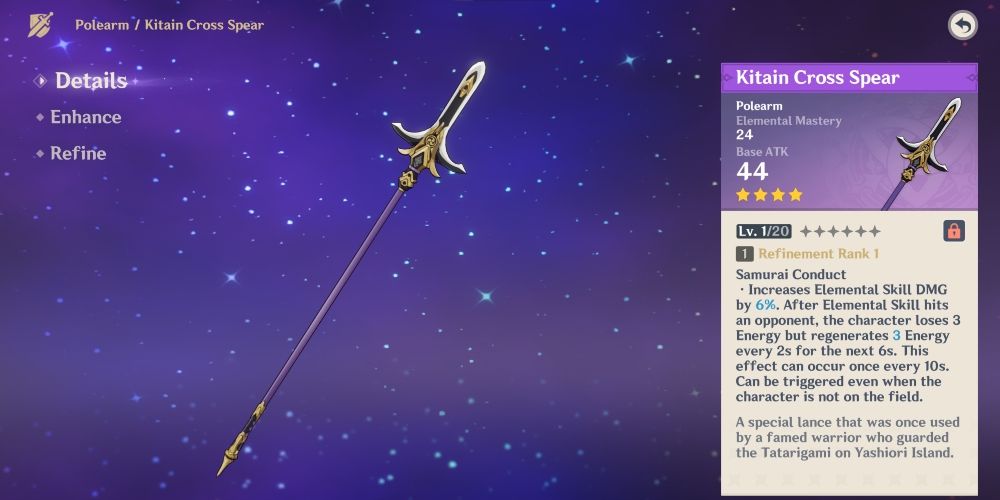 If you're looking for a forgeable option for Yaoyao, the Kitain Cross Spear is a good all-rounder. It gives 24 to 110 points of Elemental Mastery depending on its level, which is very useful for stronger elemental reactions. Plus, its passive helps with Energy Recharge. When her Elemental Skill hits an opponent, she'll regenerate three to five energy every six seconds, depending on the weapon's refinement rank.

She doesn't have to be on the field for the effect to occur, so you can quickly switch her out after throwing out her Elemental Skill. All these things combined make Kitain Cross Spear an awesome free option for Yaoyao. 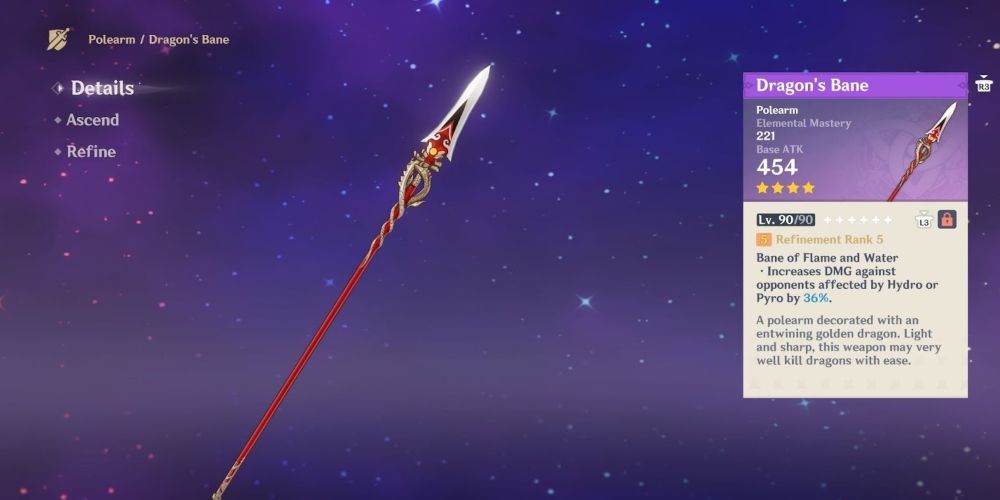 This is because its passive increases DMG against enemies affected by Hydro or Pyro by 20 to 36 percent, depending on its refinement rank. Any Dendro-based elemental reactions will benefit from Dragon's Bane, but especially ones involving Hydro or Pyro.

1 Staff Of The Scarlet Sands – Five-Star 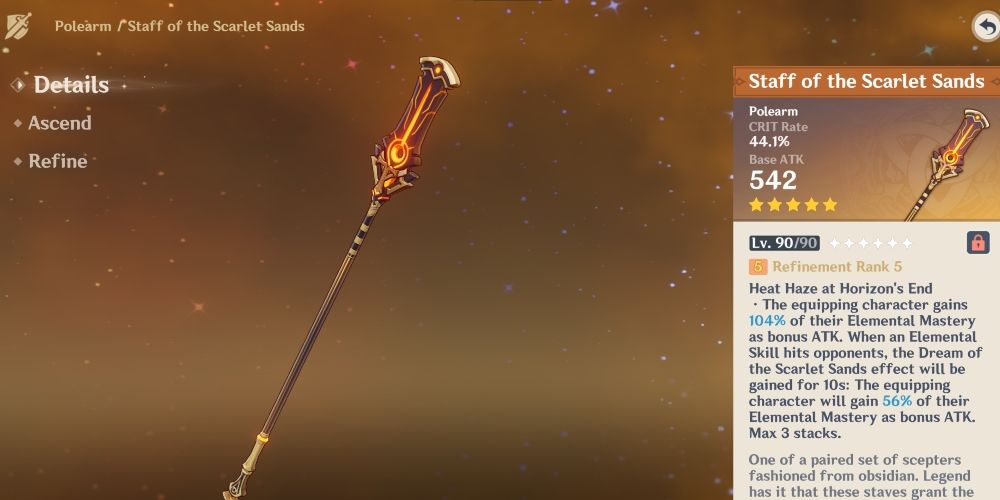 Sure, Yaoyao's best role is as a support. But that doesn't mean it's her only possible role. That's the beauty of Genshin Impact. If you want to use her as more of a DPS, she'll benefit a lot from the Staff of Scarlet Sands. It's technically Cyno's signature weapon, but she uses it pretty well too.