Before me is a pond full of fish and a rather unfortunate man face down in the water. The objective pops up on the screen, declaring that I must ‘Save Steve’, so I do my goatly duty and fling myself into the water, lick that half-submerged fellow, and drag him out with the sheer strength of my tongue. Objective complete? No. Steve was a fish, it turns out.

This is the kind of humour you can expect — and will undoubtedly fall in love with — when it comes to Goat Simulator 3. The name itself should have given that away. 3? Where was 2? There wasn’t one. Think Dad joke-level humour and puns, combine that with pop culture references galore and the ridiculous hilarity that ensues from being an unstoppable goat in a sandbox city, and that’s what you’re signing up for.

At the very start, you trundle in on the back of a cart with a farmer commenting on how long it took you to wake up. You can choose to skip this exchange, but if you don’t, it drags on to the point where the farmer even comments on the “too long intro” himself, but what better way to start the game than with a Skyrim parody? One of the things I love about the game is that it manages to pay homage to and poke fun at some of the biggest games, game development, and itself. 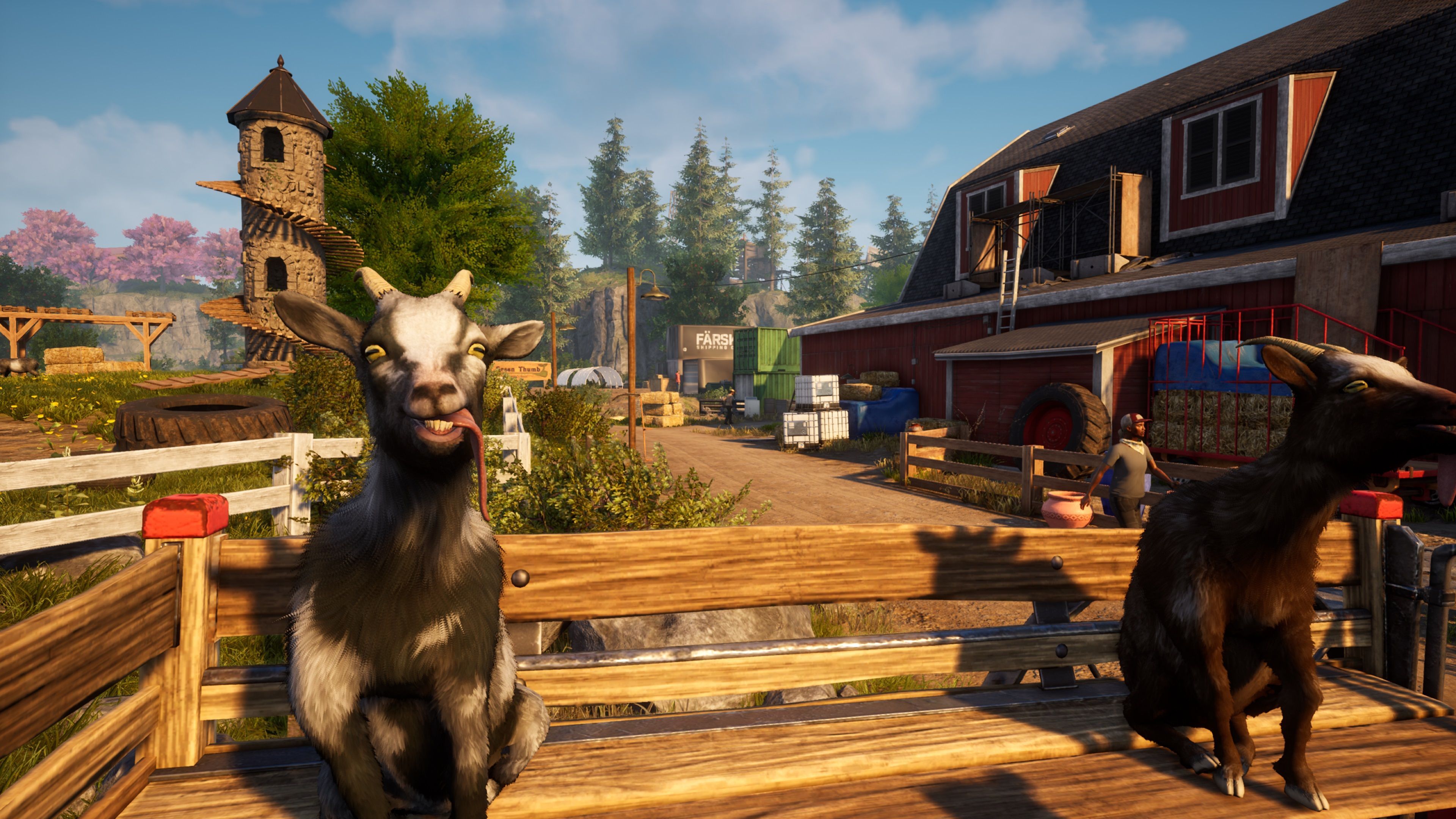 Goat Simulator 3 is so jam-packed full of jokes and easter eggs, that you can easily miss out on so many while playing. Little details can be found everywhere. The most common is finding out that the civilian you just headbutted or laser-beamed into oblivion has a name that references a celebrity. Other easter eggs can only be found by those who truly go out of their way to explore. If you break into certain houses, you’ll find the TV playing the sitcom Co-living with a Goat, which stars Chandler Bang. One of my favourites was the P.T. parody that saw you looping through a horror corridor in Quiet Hill.

Exploration is essential in San Angora. Discovering little secrets, stumbling on objectives to puzzle out, or finding new items for your wardrobe is all part of the fun. Some unlockables are pretty straightforward, while others require more legwork, such as blasting yourself from a canon into the dam to destroy it. This then drains the area that hides the secret city of Atlantico, where you can go and claim the Shark Fin accessory. Though not every accessory you unlock is worth the trouble you’ll go to in order to get it, half the fun is figuring out the solution.

Kicking and licking all over the place has never been so easily enjoyable. Goat Simulator 3 includes a range of improvements and new features that crank the goat mayhem up to 11. A proper map with all the trimmings, such as waypoints, marked quests, and minigames, makes it easy to navigate and find your bearings. You’ll uncover the fog of war from the map by synchronising Goat Towers, which are doubly important as you’ll also need them to access the Goat Castle. 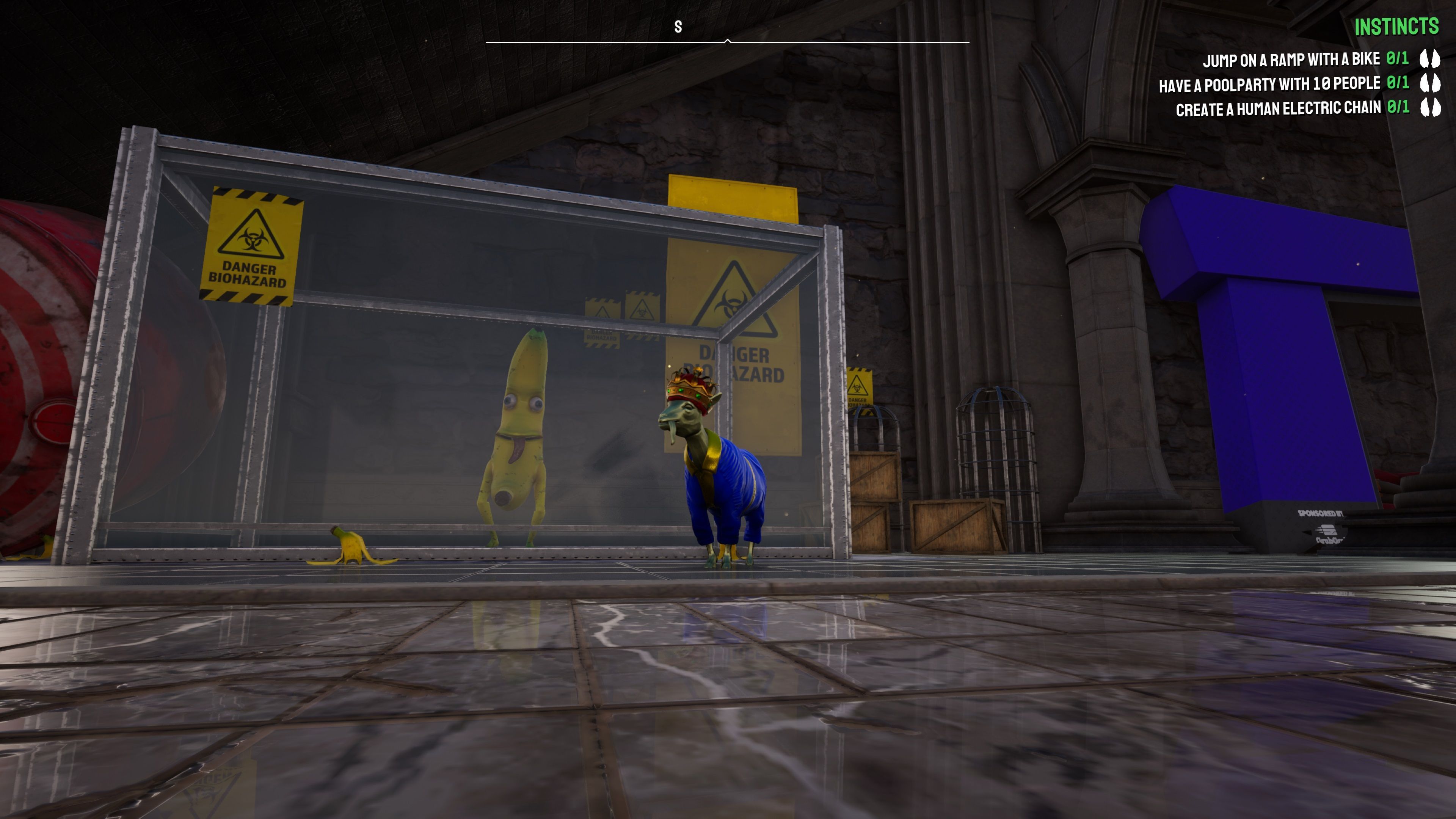 The castle starts as a crumbling, crusty waste of space, but as you complete quests and upgrade it, it becomes a shiny base of operations that features little keepsakes of your shenanigans around town. Remember that square-shaped whale called Billy you freed? There’s a little plush of him in your castle. That abominana banana man you unlocked? He’s dancing away in a box in the castle too. Even Steve the fish is there. The castle is also where you unlock the true ending of the game. An ending in a sandbox game? It’s simply unherd of. The ending is so perfectly, hilariously Goat Sim that I don’t want to ruin even one little bit of it.

Aside from a wider area to run wild in, collectible trinkets now tinkle when they’re nearby, making them a little easier to find. Only a smidge, though. You’ll still be hunting them for hours. More importantly, you can now hijack cars GTA-style and drive around San Angora, running down pedestrians or crashing into things as your black little goat heart sees fit. It’s very similar to how you could use cars in the Payday DLC map for Goat Simulator, with the added benefit of special vehicles to cause further havoc, such as tow trucks to yank buildings off their foundations, or a truck that fires energy drinks at people.

But let’s move on to the star of the game, Pilgor. In addition to the shiny glow-up that comes from the benefit of some nice new graphics, customisation has been greatly improved. Mutators are a thing of the past, and now you have a whole wardrobe that lets you equip different items to your goat’s head, body, back, and feet, as well as picking out your horns, fur, and body… because as Goat Sim fans know, you’re not always a goat necessarily. From outrageous costumes such as a Big Brother backpack that looks like the Eye of Sauron to a boring band tee, you can dress your goat in just about anything. 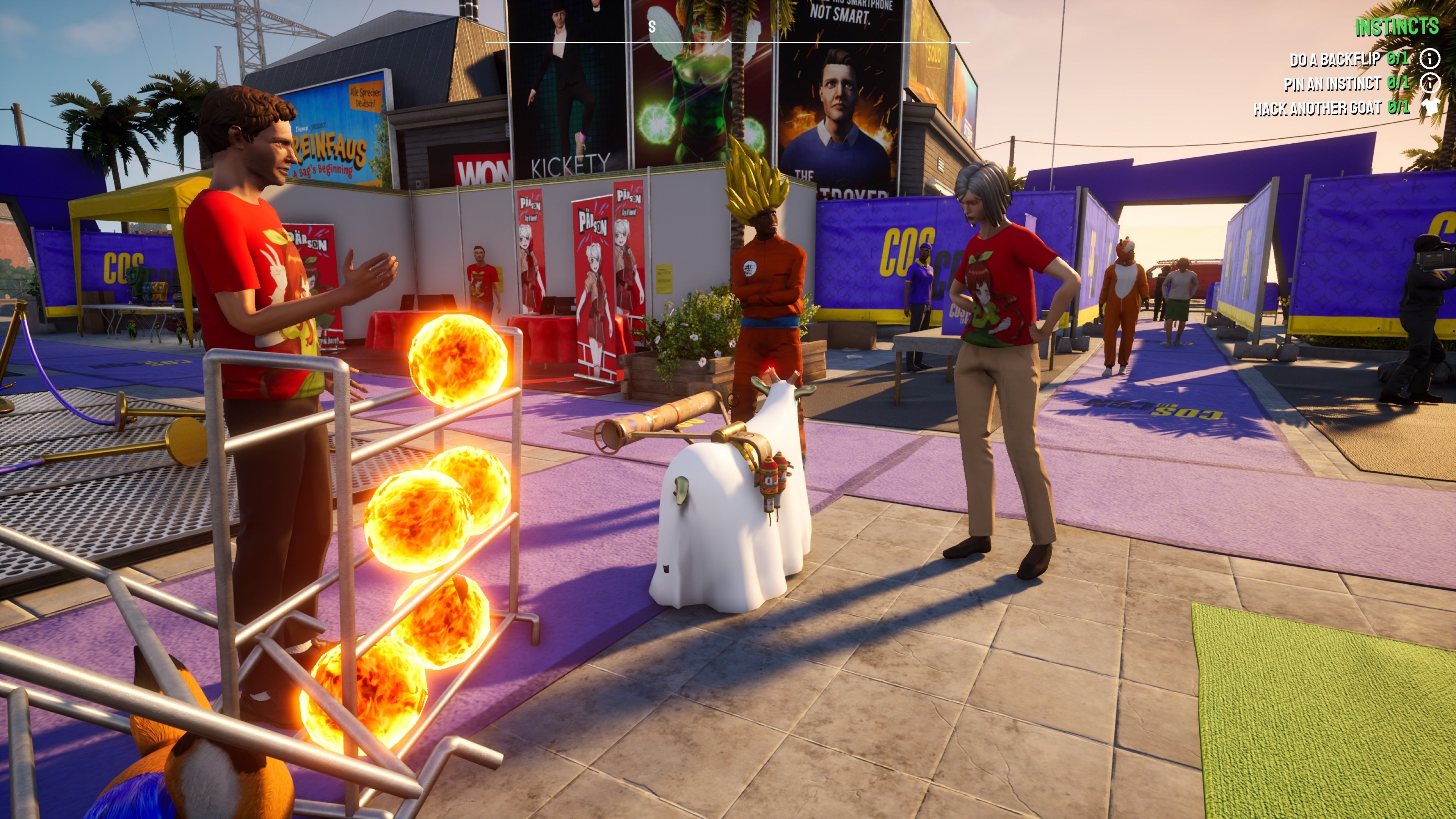 It wouldn’t be Goat Simulator without a trip. Sure, there is a weirdly psychedelic adventure with Hobo the Grey, but I meant a trip as in a group of goats — the multiplayer. My son turned our household into a Goat Sim fanclub years ago, and it’s now one of our favourite go-to's when gaming together. If you think for one moment he let me play this alone while I reviewed it, you are sadly mistaken. Besides, I needed a goat buddy to try out all the new minigames.

Sure, we had races in the last game, but they’ve got nothing on these. The Floor is Lava, King of the Hill, Car Derby, you name it — Goat Simulator 3 has got it. My favourite is the Splatoon-esque Headsplat, where you race to see who can cover their surroundings in the most paint. Exploring San Angora is more fun in co-op, too, as we worked together to solve objectives, headbutt each other into the ocean, or simply became menaces to society until the police threw handcuffs on us. No, really.

I’m not overly a fan of split screen as seeing what your fellow player is doing at all times isn’t always ideal, especially when playing Prop Hunt, aka hide and seek, but one of you is an item you licked. Could you be the item that is in the centre of your split screen? My kid doesn’t mind split screen at all, so I think it’s just me being spoiled and wanting my own space. In any case, Goat Simulator 3 will have up to four-player online co-op, so I will be kicking my son onto his own console at launch. 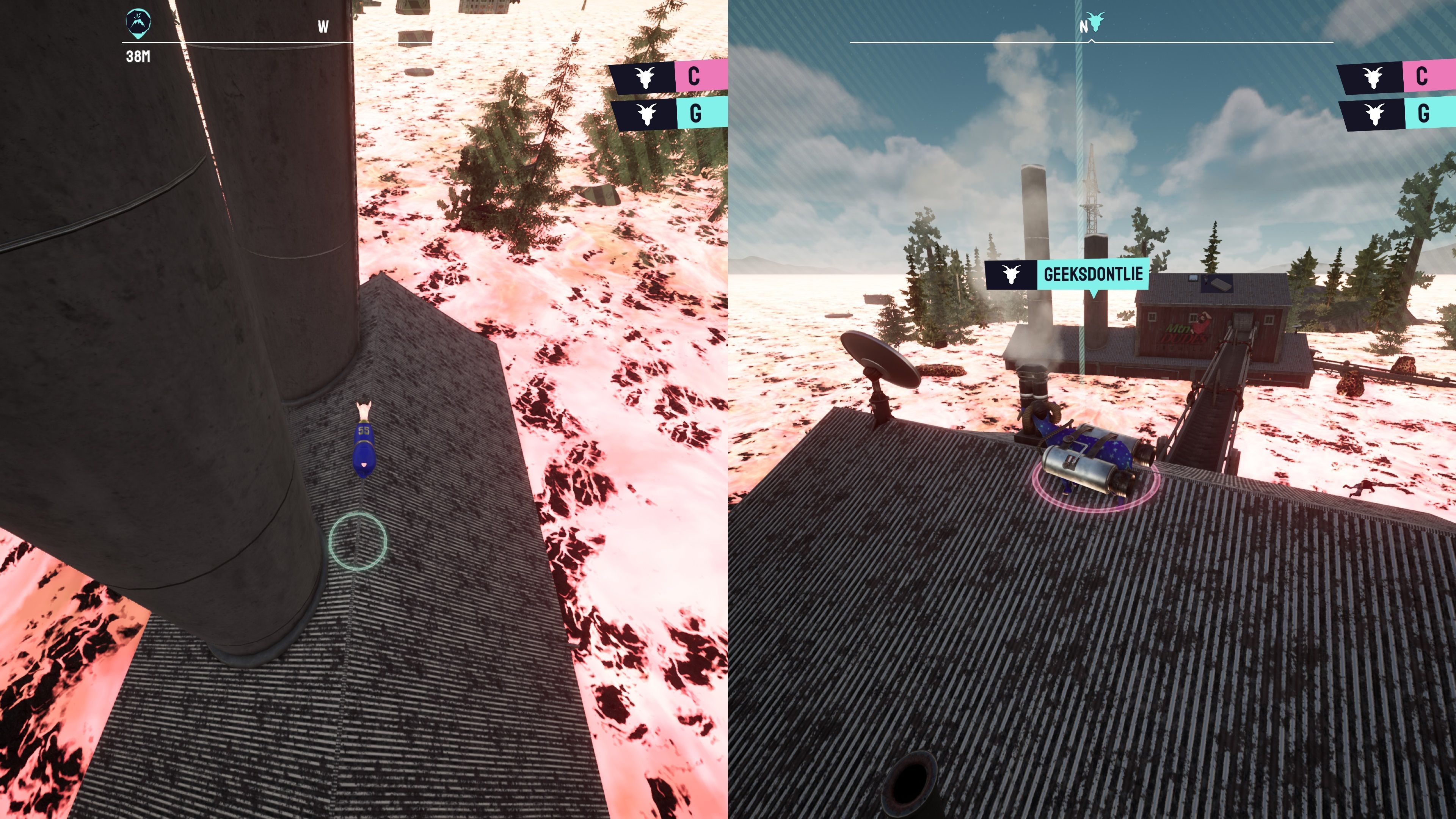 There were a few little glitches or moments of the game hanging on a frame. Nothing game-breaking enough to ruin my enjoyment, but there were a couple of times when it required exiting out and reloading to get the bug to bugger off. Most noticeably, when upgrading the Goat Castle's final level and removing the last chain, no matter how many times I pressed the button to do so, it just wouldn’t complete. Talk about anti-climactic. A quick on-and-off again solved the issue, and the ending was worth the short wait.

Goat Simulator 3 raises the baaa-r on every level (I can’t help myself, I’ve been playing it for too long and the goat puns have taken over). Everything is bigger and better. A larger open world, more customisation, more to unlock and do, we’ve finally got online multiplayer with fun minigames, and there’s just more overall general goaty goodness. Though you might encounter the odd glitch or two, it doesn’t detract from the gameplay, and you’ll brush it off as easily as your ragdoll goat getting back to its feet after crash-landing from the top of a never-ending beanstalk. Even if you’ve never been tempted by it before, I can’t emphasise enough how strangely satisfying it is to unleash hell in goat form on an unsuspecting city.

Score 4/5. An Xbox Series X|S review code was provided by the publisher.