The Doomsday Heist in GTA Online is basically three heists crammed in one, making it easily the longest and most complex heist to complete. Act one is all about the setup, making it vital for the rest of the acts to go smoothly. The potential payout for completing such a difficult series of missions can easily make up for it in the end, and our guide will show you how you and your crew can walk away with as much cash as possible.

Act one of the Doomsday Heist in GTA Online, subtitled The Data Breaches, is made up of three prep missions, three setups and one finale before you are allowed to move on to act two. Being the first part of a much larger heist, the missions in this act are going to be the easiest of the bunch, so you and your crew can still come away with a ton of cash in a short amount of time if you know what to expect.

Once you’ve recruited your elite team, at least one of you must purchase, or already have, a Facility and be the CEO. Once you do you can begin the Doomsday Heist and access the mission planning board. You have three prep missions and three setup missions that they unlock, and you will have to return to your facility between each mission to begin the next. 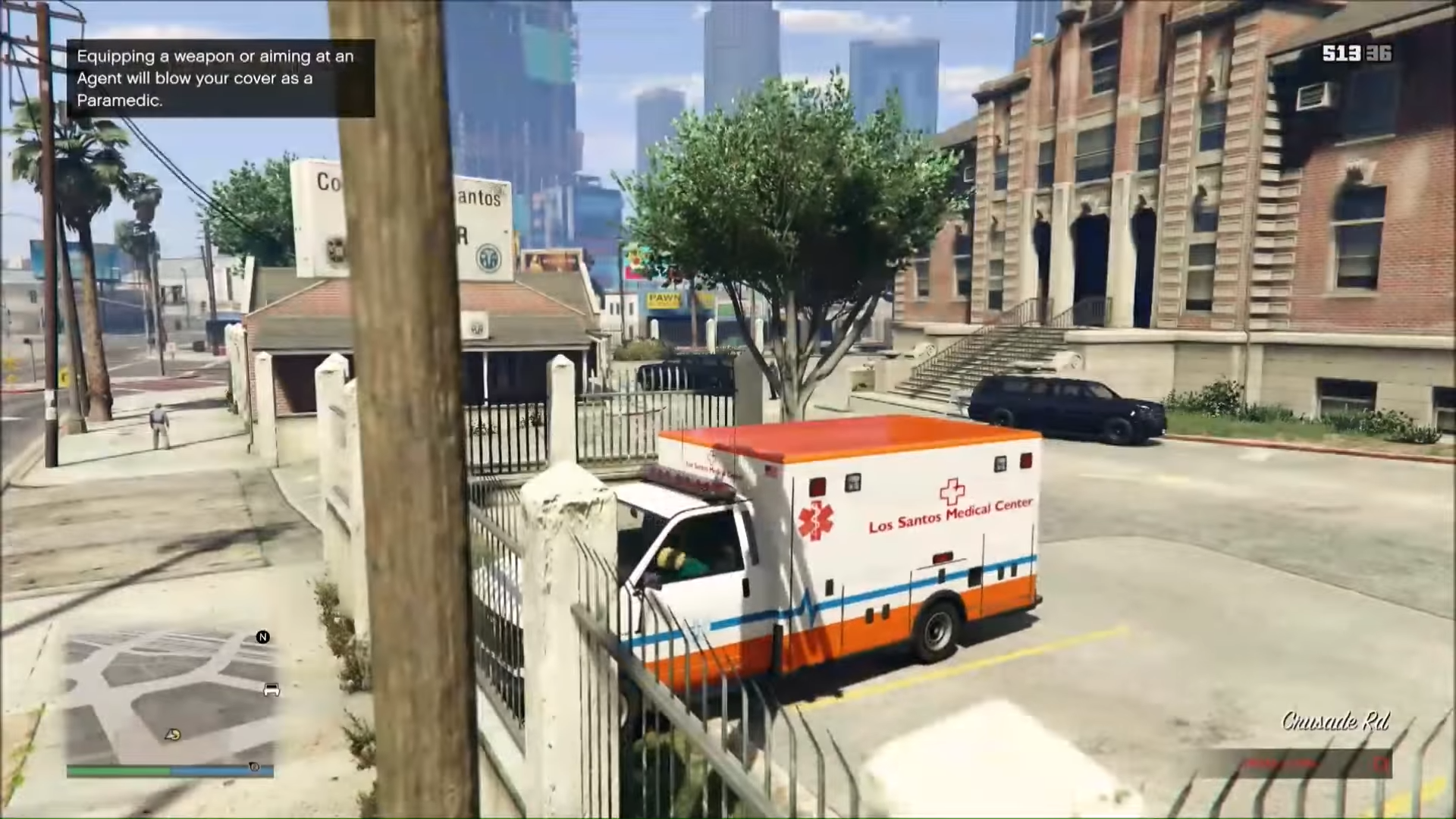 Your first prep mission objective is to steal an ambulance holding paramedic equipment. This ambulance will be marked on your map, but guarded by some police. There’s no way around fighting them, so take them out quickly and send one of your crew to drive the ambulance back to your facility. Everyone else should be ready to protect the driver because any other players in the lobby will be notified of what you’re doing and might decide to mess up your plans. The driver will also have to lose the cops before they can complete the mission, so they should call Lester as soon as they have a chance.

Completing that first prep mission unlocks this setup where your team will be split into two. One has to retrieve an killed agent’s data from a morgue while the second is tasked with getting back their stolen helicopter. 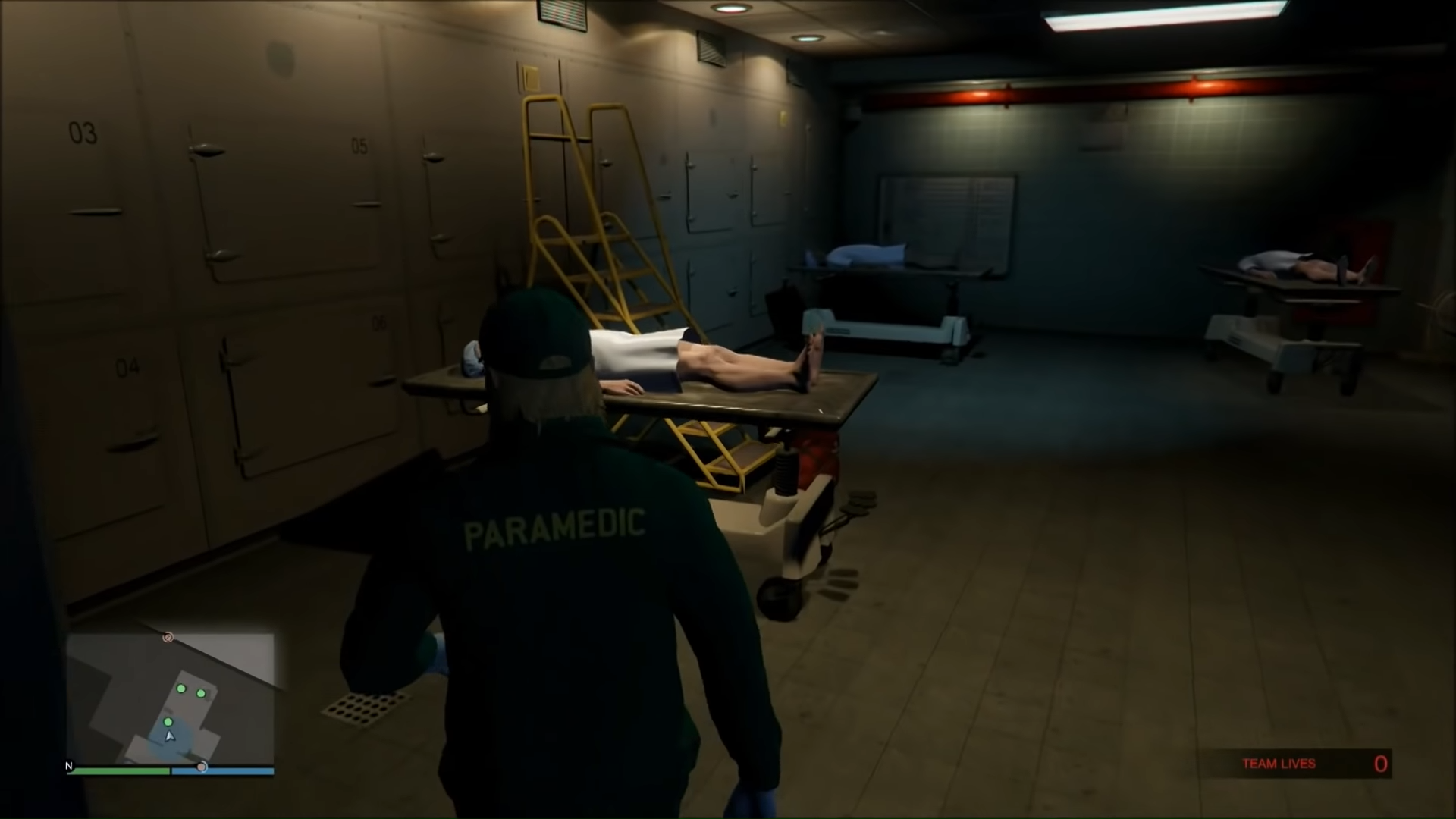 Team one, dressed as paramedics, will drive over to the morgue in your new ambulance and need to get in and out without blowing your cover. Once inside and passed the desk, take a right to find the cold storage room a little further in on the right. You will find three potential bodies to check out, so split up and interact with them until you find the agent.

Your next objective is to head to the upper floors, so go back the way you came and find the fire exit door to begin going up. Take the door to the left of the lift you come to and up some more stairs and straight ahead to a room with some police officers you will be forced to take out. Try and stay stealthy if possible. From that room head through another door on the right and use the laptop to start downloading the data. Once complete you will have to fight your way out to get picked up by team two in the helicopter. 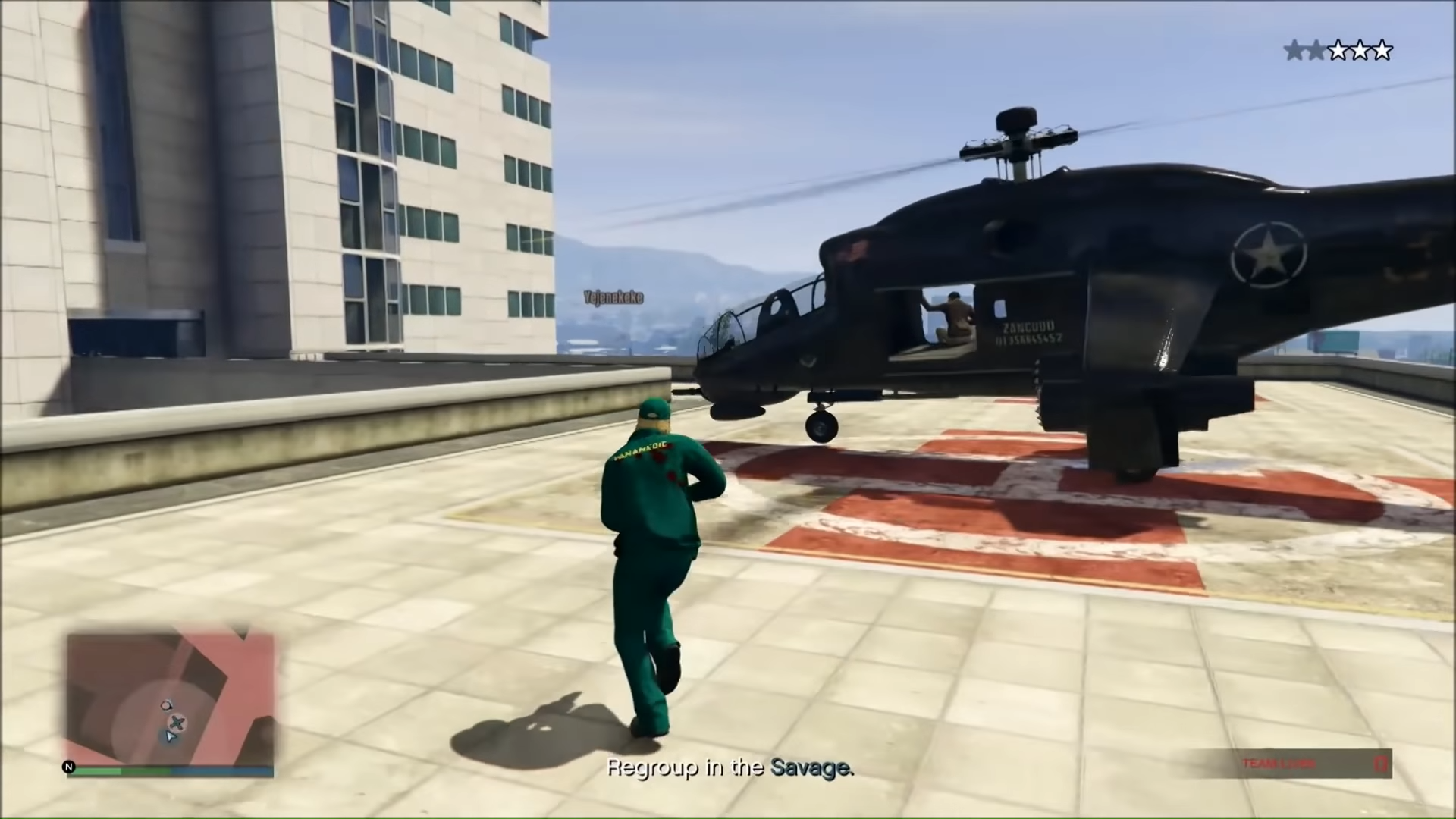 Team two, obviously, is in charge of getting said helicopter and retrieving team one. Start off by getting to La Mesa and waiting for the savage. Get in and follow the chopper to El Burro Heights where you will need to take out a ton of guards and pick up a briefcase. After that you just need to take the chopper, pick up team one, and lose the cops. 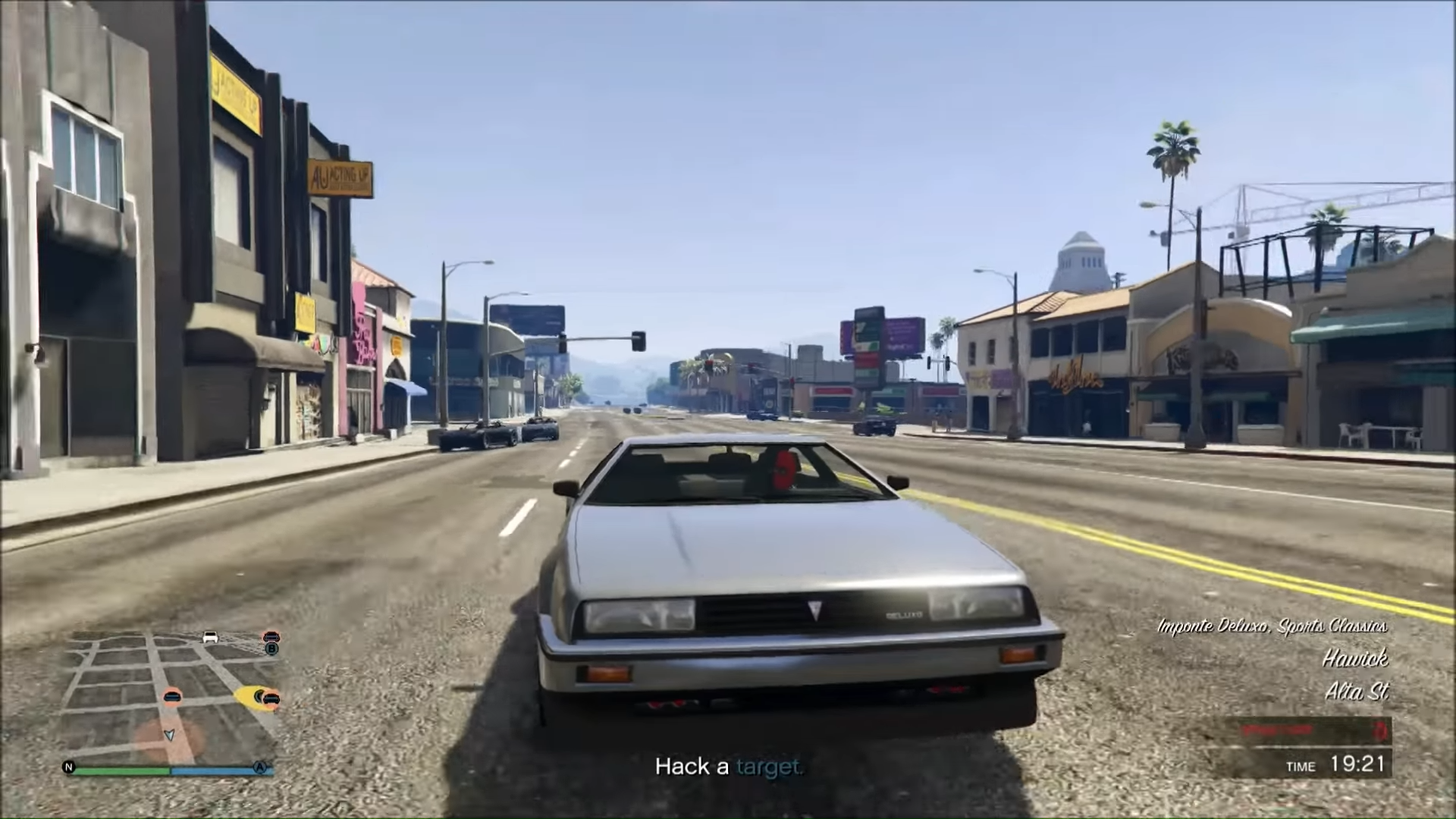 This prep is about as straight forward as they come in GTA Online. Follow a waypoint, kill some guards to get a key, use it to open a garage and steal four Deluxos. You will need to make a stop on the way back at an LS Customs to repaint the cars, but otherwise is a nice quick and easy prep.

Now that you’ve got your Deluxos you need to use them to hack four target vehicles as they’re moving. You can all split up to take a different target to get the mission done faster, just make sure you stay at a safe distance behind the trucks you’re hacking to the men inside can’t shoot at you. If any of your Deluxos are destroyed you will have to restart, so be careful. Once the hack is complete, blow up the truck. 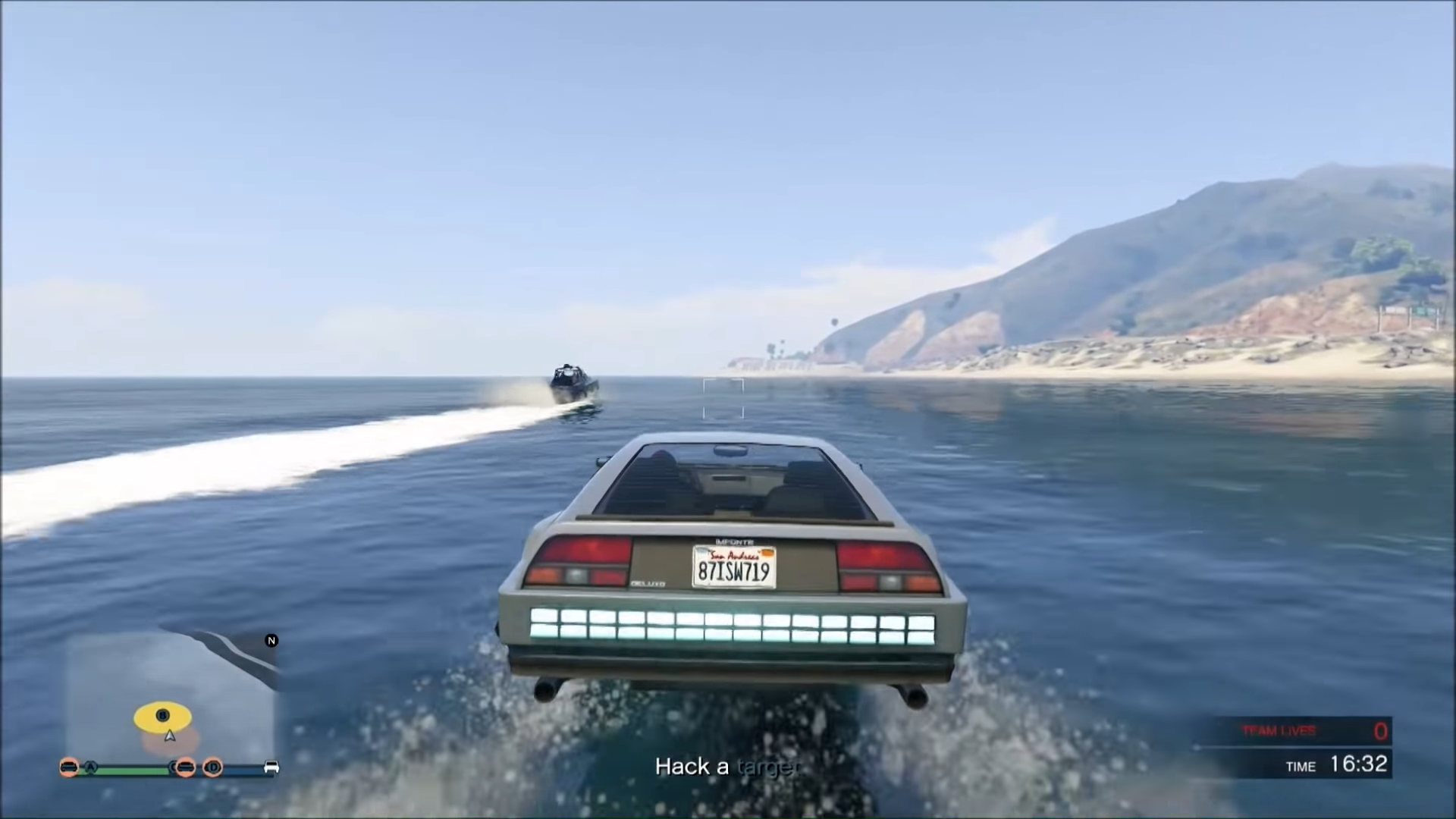 A new set of targets will pop up once the first four are hacked and destroyed, this time boats instead of trucks. Go into hover mode and repeat the same process as before to hack the boats.

The last objective is at the LSIA airport where you need to hack a Jumbo Jet. Take off after it and have one person maintain hacking distance while the other three keep an eye out for helicopters coming in to attack. Use your lock-on missiles to take them out before they can even get close, and then do the same to the jet once you have the data. 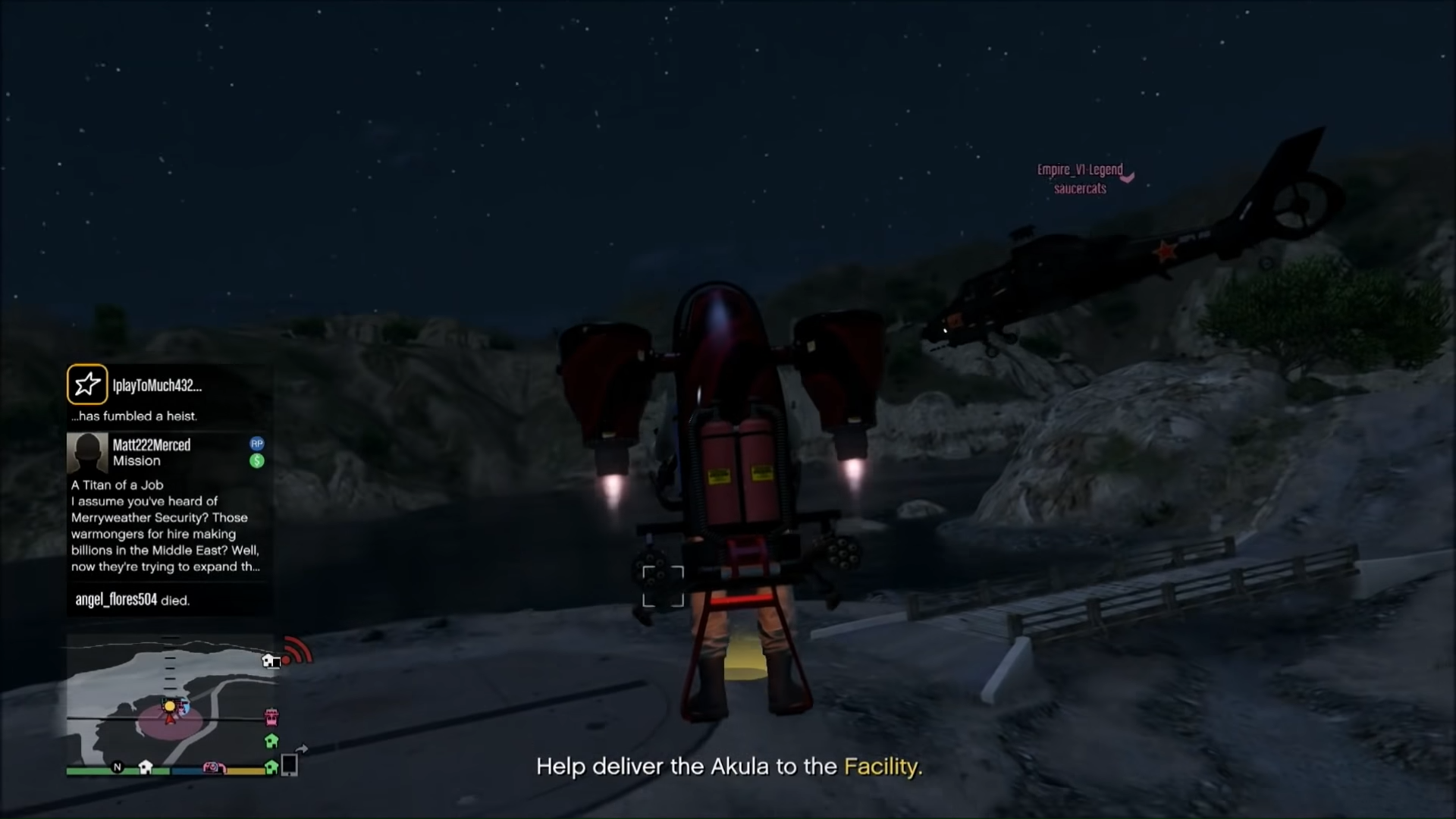 This is another easy one on paper, but can be dangerous. You’ll be sent to Fort Zancudo to hack a computer in the control tower to get the location of the Akula helicopter. Your best bet is to rush in and go right for the elevators to safely get to the top of the tower. You’ll only have nine minutes from that point on, so immediately interact with the phones to start downloading the data.

If you were still undetected, you won’t be anymore. Hold any attackers off here until the download is done and then make a mad dash back down to head for the Akula’s location. Steal a vehicle, preferably armored, and plow through the fences to escape as fast as possible. Once out of the base, it’s a quick trip to the airport where just a few guards stand between you and the Akula. Get it back to base to complete this prep.

Your final objective of act one is to sneak into the N.O.O.S.E facility and steal data without getting caught. Staying in stealth is somewhat finicky in GTA Online, so move slow and make sure everyone activates stealth as well. Use silenced pistols to shoot the cameras when you arrive, as well as for the guards at the back doors. You’ll need to wait a moment for the head of security to kill him and get inside. 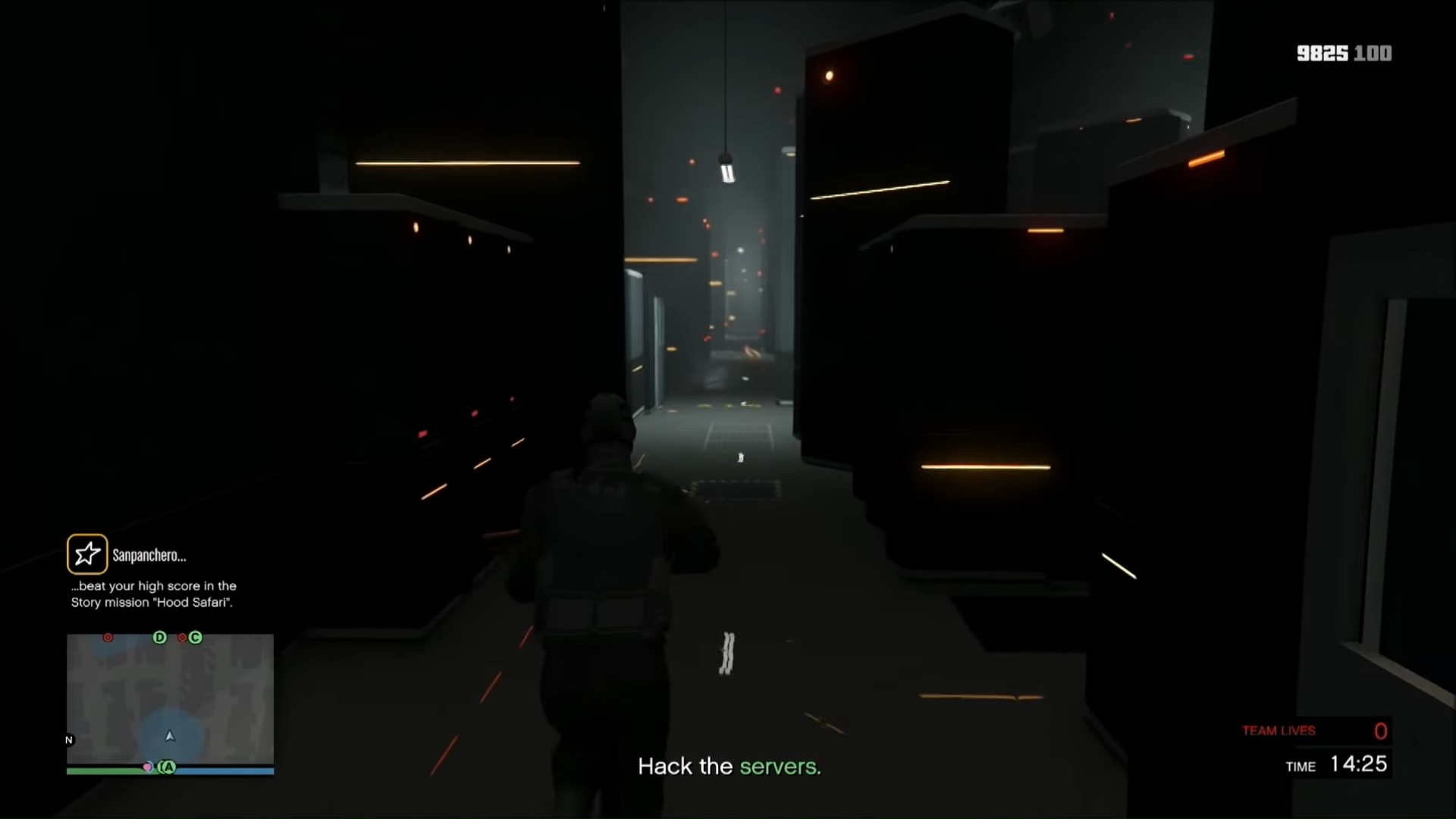 Sneak in, taking shots only when no other guard will see, and slowly make your way down to the server room. Take your time and kill every guard down there before hacking the three marked targets. Cover each other as more guards will start to come, and head into the elevator as soon as all the hacks are complete. Jump back in your Akula and get out of there. 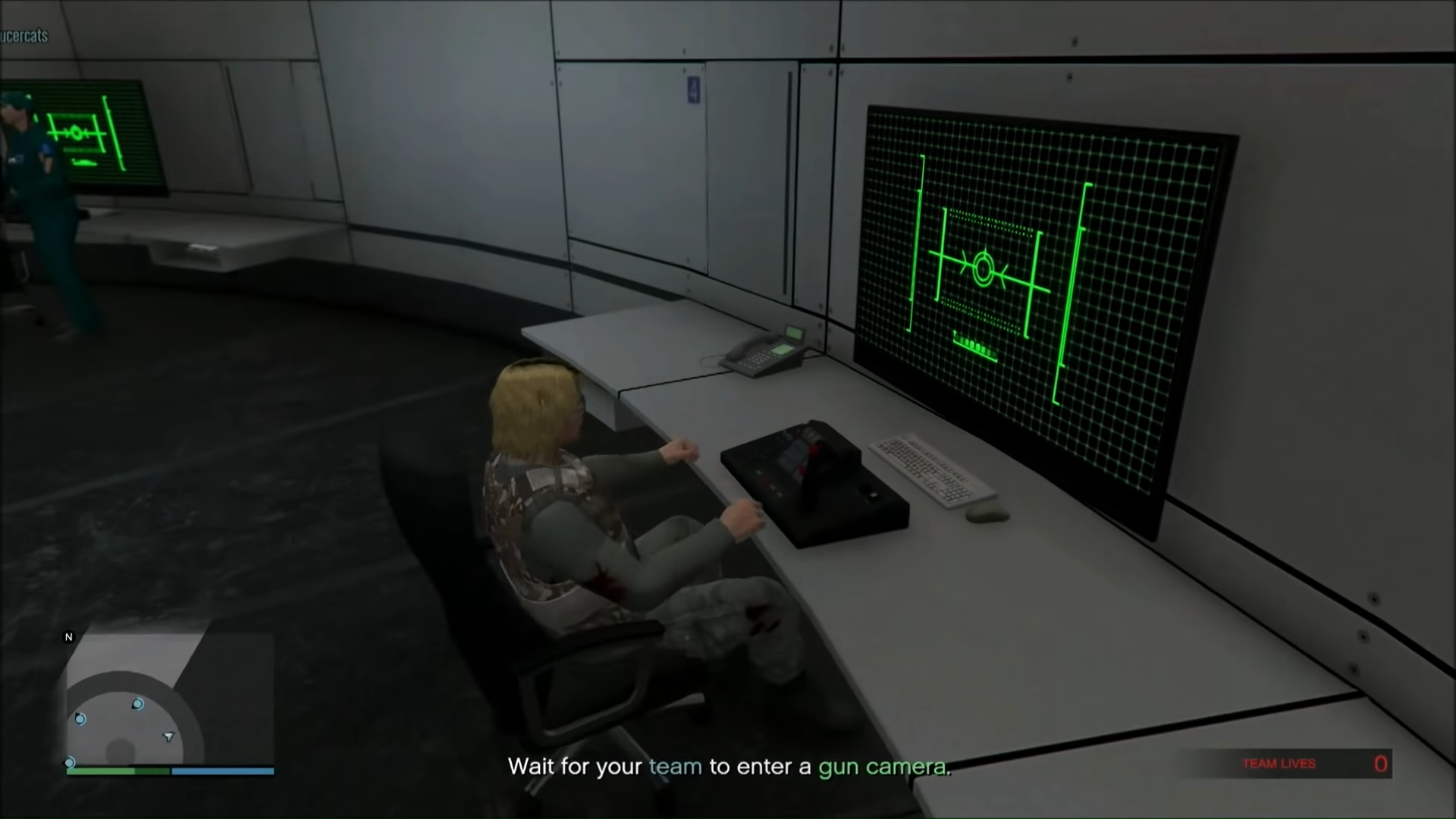 After all the setup and preps are done, you can now launch act one’s finale. Each member of the team will get a role, so choose who will be responsible for what carefully. As a whole, you will be going to the IAA Base to infiltrate and kill their hackers. There are a lot of guards here, so come well armored and with plenty of ammo. Storm the base, killing everyone inside to reach the War Room. This is where your roles will start to come into play as you all take different posts on gun cameras. The mission will end once your team as taken out all the enemy reinforcements that arrived back outside, a cutscene will trigger, and you will unlock act two of the Doomsday Heist back at your facility.