Sonic's cameo in Chip 'N Dale: Rescue Rangers has been popular, but has also raised some eyebrows in the fanbase. In recent years, Sega has notoriously been quite particular about how its mascot is depicted on screen, giving writers guidelines on what he can and can't do. It, therefore, seems strange that they were okay with him being depicted as the ugly creature we see in the new film.

But this renewed interest in the rules around Sonic the Hedgehog has brought in newcomers who can't quite believe what they're hearing and has resurfaced discussion on some of the things Sonic can and cannot do under Sega's rule. Is Sonic really not allowed to cry? Can he seriously never get a girlfriend? Some fans are adamant that this is the case, and aren't happy that Chip 'N Dale got a pass to show a very different Sonic when the comic book writers apparently have to stick to strict rules. However, as it happens, it's actually a bit more complicated than that.

Claims that Sega bans Sonic from crying have been circulating since the 2010s, and it's not without merit. The most popular example of Sonic having his emotions censored comes from these iconic panels, where our hero mourns the loss of his children. In the original draft, he seems to react quite appropriately to the situation, but in the final version he just looks mildly annoyed. 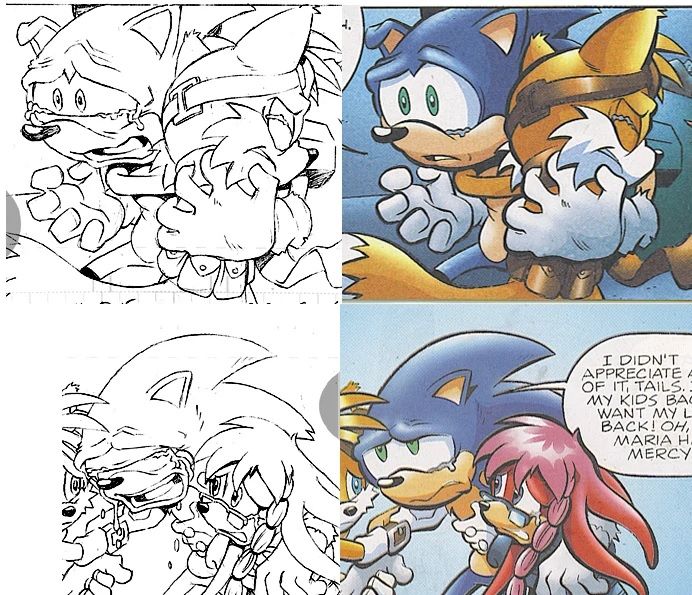 Controversial comic writer Ken Penders often gets the blame for these mandates being put in place. When Penders left Archie Comics, a lawsuit ensued. In the end, Archie agreed to stop using every character he created for the Sonic comics – making it necessary to reboot the canon in the process. The story goes then that Sega seized the opportunity to slap a bunch of other rules on the team too.

This, however, doesn't totally track. See the example above? That's from 2006 – and takes place in the original, pre-reboot canon. So, if these mandates do exist, they've actually been around in some form for a while. Not just since the 2013 reboot. Penders is off the hook this time.

So, what proof do we have that Sonic is legally not allowed to cry, outside of that one panel? This is also pretty hard to nail down. A list detailing everything in the supposed mandate that often gets shared around isn't totally legitimate. However, it's not too far from the truth, for reasons we'll get to in a bit.

According to fans, Sega's rules state that Sonic can't "show excessive emotion", or even lose against the bad guys. All Sonic characters are also apparently barred from hooking up with one another, get new family members, or be killed off. This is likely why fans believe these rules are new – Sonic did have a girlfriend in the past, Sally, but they were split up in the reboot. In the games, he's been single since his brief flirt with Princess Elise.

Keeping up? Good, because I'm going to throw another curveball at you – there's no primary source for this mandate. At least not one I can find. There's a screengrab of the rules from an old blog post, apparently made by comic writer Ian Flynn, but it's been claimed that the author's name was edited and wasn't him at all.

But wait, there's more. While Flynn has dismissed that there's a solid mandate he has to follow, he has strongly suggested that the rules he has to follow aren't that far off. When a fan mistook him as the one behind the "can't cry" rule, Flynn responded, "I don't make the rules. At all. Sega makes the rules for how their property is utilized". So he didn't deny that "can't cry" is one of the rules. 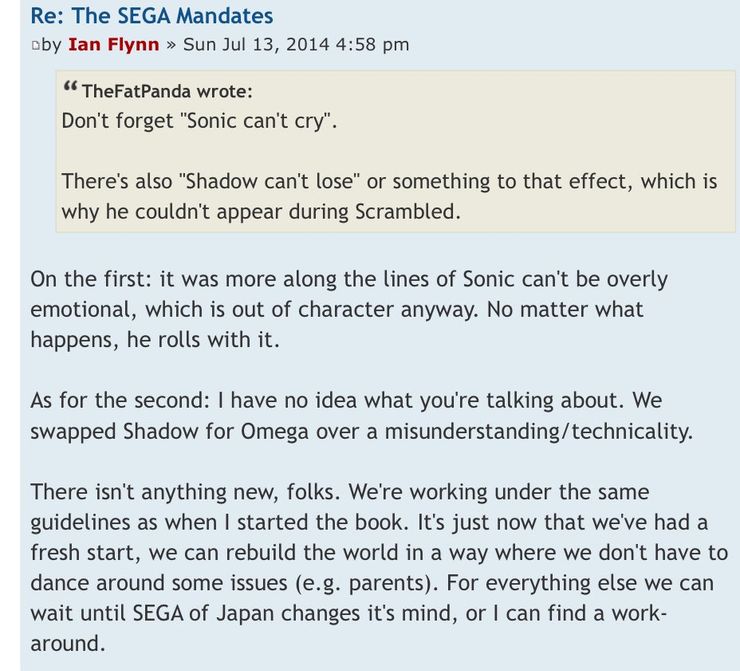 On the existence of a supposed mandate, he also commented, "If they're looking for an itemized list on corporate letterhead, no, that doesn't exist. Never said there was. It's rules and guidelines handed down thru approvals that change with the brand's direction over time. What is ok today may not be tomorrow & visa versa."

Flynn's claims that these rules aren't set in stone seem very likely. Both Sonic and Knuckles have been given family members in the recent Sonic movies. Still no tears though.

So there we have it. There is no stone tablet in Sega HQ that says "Sonic can't cry", but there are guidelines that say he has to keep his emotions in check. These rules can be bent, as we saw in Chip 'N Dale, but it looks like Sega isn't in any rush to let Sonic get all teary. The Blue Blur might get to have some fun in his cameos, but in the main series, he's likely to stay exactly the same for years to come.