Though it blends numerous elements together into one cohesive package, Arcade Spirits: The New Challengers is, at its core, an interactive visual novel. You'll spend most of your time with the game chatting with its eclectic cast of characters and watching dramatic scenes unfold that will test the solidarity of Team Good Clean Fun.

Naturally, you'll need a way to chart Seeker's progress befriending their motley new crew of GCF pals. That's where the tried-and-true RPG morality system comes into play, this time in the form of a five-trait personality system that categorizes every conversation option, so you can know ahead of time the sort of tone you'll be establishing with your replies.

Let's gab about this five-pack of fun and mayhem, as Domino would say. 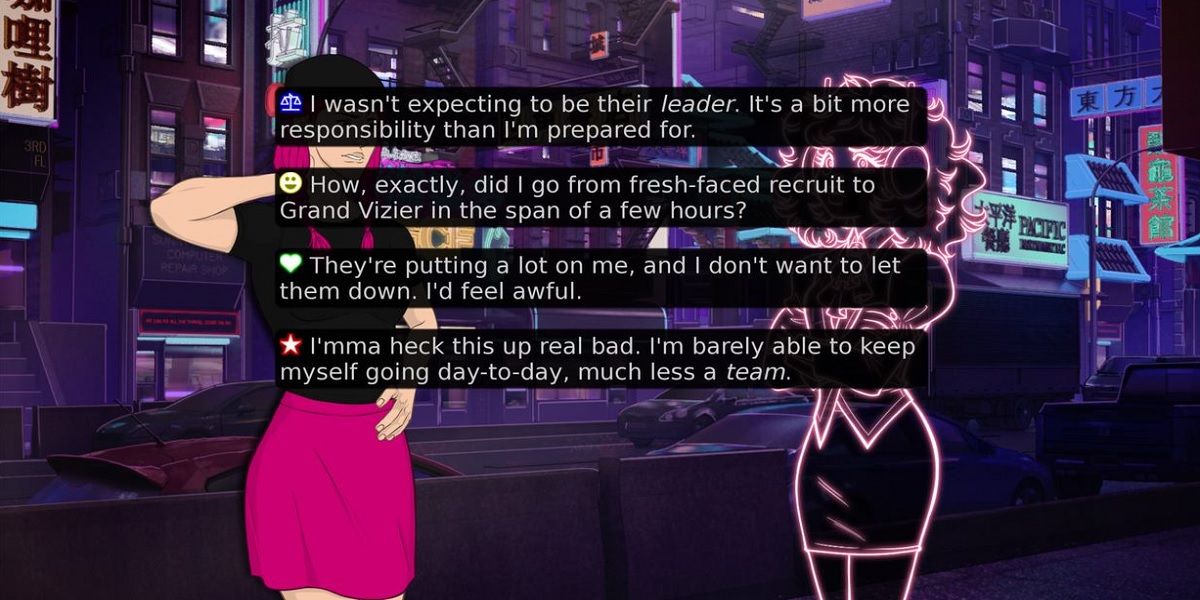 Here's a pretty common scenario. A character — Iris, in this case — says something that prompts you, the player, to say something back. That's visual novels 101, of course, but not every VN attaches cute little emoji-like icons to reinforce your understanding of each prospective response.

You'll note that there are only four choices here rather than the full five. The justice scale represents Steady. The red-outlined star is for Gutsy. Kindly is denoted by the green-outlined heart. Quirky's the yellow smiling face. What about Flexible, then? Flexible options are given the icon of a small white cuddly creature. Definitely gives off the vibe of an unofficial mascot.

Flexible isn't always available, as you can see above. Especially during tenser scenes, Flexible might be skipped entirely. This is because selecting this tone is kind of a have-your-cake-and-eat-it-too scenario in which you're unlikely to fully offend anybody but just as unlikely to genuinely impress them. The game itself describes Flexible as a good move if you're stuck on an otherwise-challenging decision.

How Each Trait Affects Gameplay 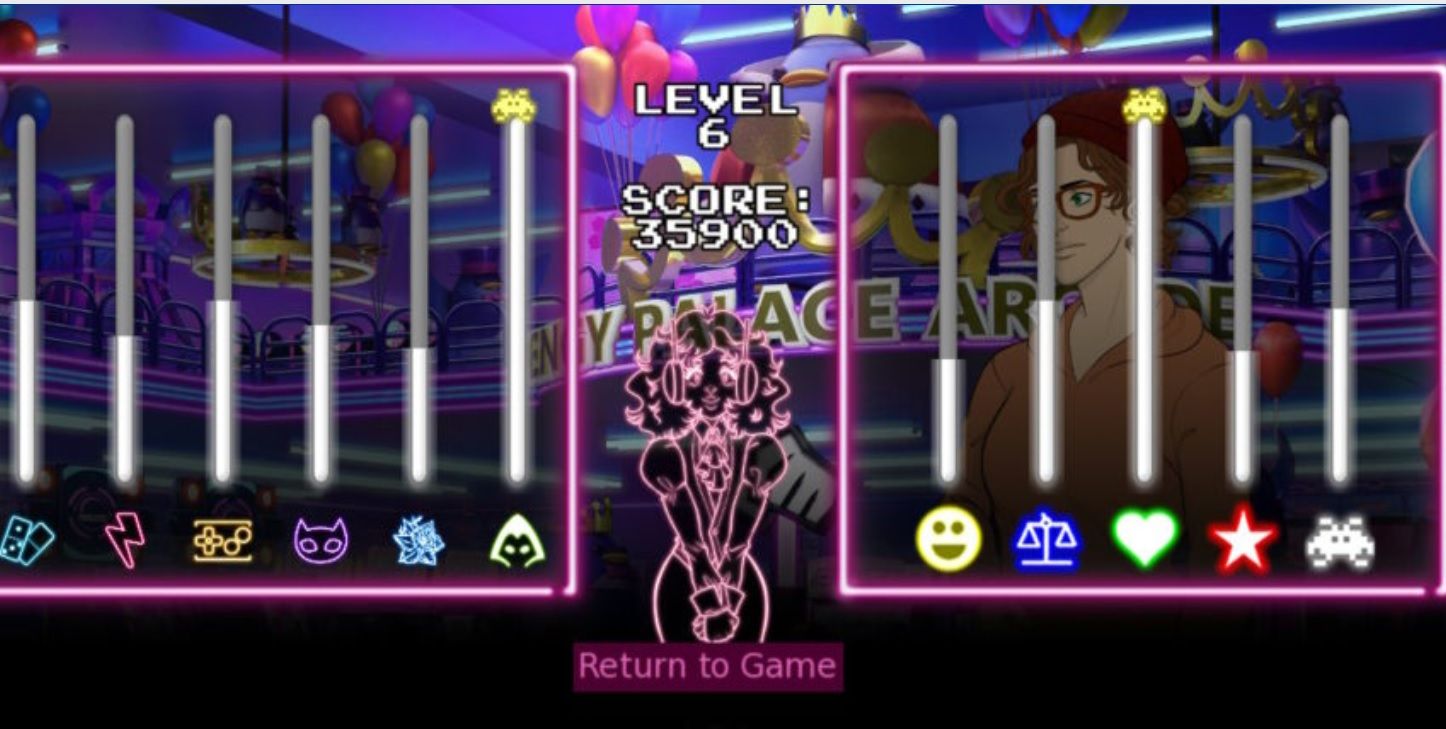 There we go. Now we see all five. In order from left to right: Quirky, Steady, Kindly, Gutsy, and Flexible. You'll seldom want to run with Flexible unless it's truly your best bet because it's pretty much never going to prompt the strongest reaction from anyone. Flexible is Arcade Spirits great neutralizer, something that will never truly captivate the listener(s) but nor will it offend.

The more you select a particular trait in conversations, the more likely Iris (and thus the game itself) will view Seeker through that lens. You can check your progress with each measurement in the form of the vertical bars seen above. But wait, what about all those bars on the left? Those six icons represent the other members of GCF, and thus, all of your close companions.

Now we're arriving at the heart of the matter, the real reason to mind the five-trait personality system in Arcade Spirits: The New Challengers. Tapping into a trait like Kindly will cause a character like Grace to like you more than if you had stuck with Gutsy instead. On the other hand, Gutsy is going to get Zapper swooning all over you. Your overall likeability across the board will be reflective of the responses you've made, and thus the positioning of each trait in this graph every chapter. 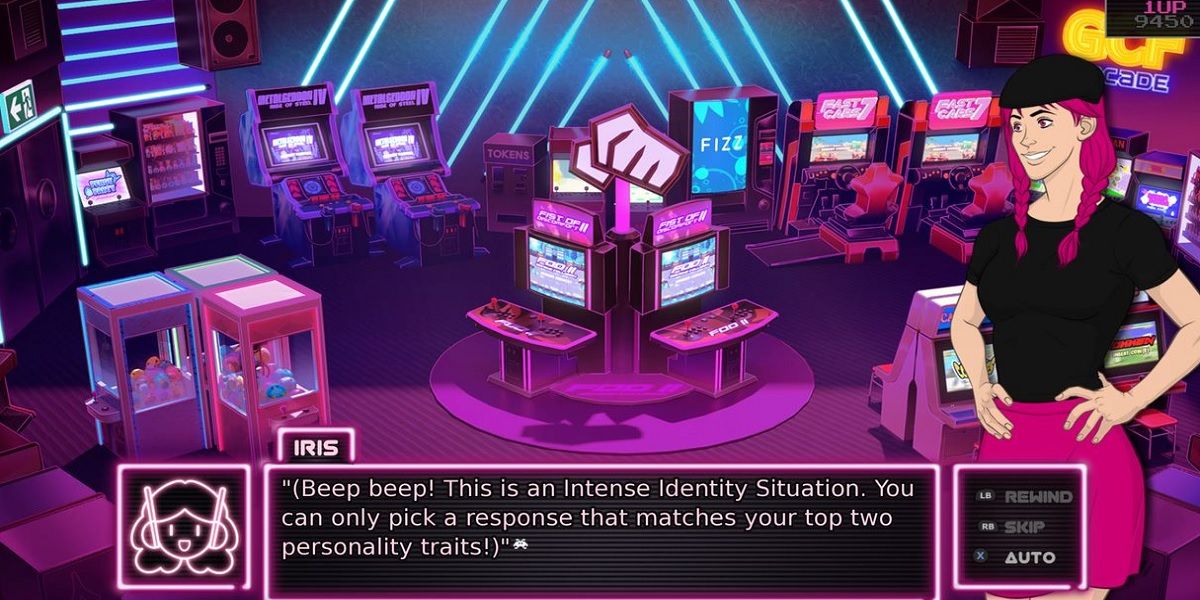 Last but most assuredly not least, Intense Identity Situations occur when the game tasks you with making a sizable narrative decision. The magnitude of an outcome reshapes the story considerably. In a twist, you're only ever able to choose from two of either Steady, Gutsy, Kindly, and Quirky.

The pair of options available to you will reflect the personality traits you've focused on the most up to that point, meaning that Seeker is realizing the culmination of a potentially life-changing thought process.

Once again, the Flexible trait is left in the dust for Intense Identity Situations, signifying its limited usefulness. These moments are about taking a stand, and Seeker will only believably be able to do so by tapping into their foremost abilities. Whether that means being smug, sarcastic, serious-minded, or simply saccharine is up to you.