Storytellers use weather for all kinds of thematic reasons – your English teacher called it ‘pathetic fallacy’. Rain, in particular, can be used to represent lots of different ideals. Rain can be cleansing. The Shawshank Redeption’s final scene famously depicts Andy Dufresne bathing in a storm to wash away his guilt and trauma. In Blade Runner, the rain that falls on Roy Batty as he utters his final words symbolize his despair and hopelessness. Rain can also foreshadow danger, as in the idiom ‘a storm is coming’. Though not as celebrated as The Shawshank Redemption or Blade Runner, Uncharted 4’s At Sea chapter features an incredible rain sequence too. It’s one of the best uses of weather as a narrative device I’ve seen, and a rare example of compelling storytelling that could only work in a video game.

When the chapter begins, Nathan and Sam have just escaped from Rafe and his Shoreline goons in Madagascar. To their surprise, the crew returns to their safehouse to find Nathan’s wife Elena, who tracked him down after suspecting he was lying to her about the treasure hunt. The couple fights, and Elena ends up leaving with Sully in tow. Instead of trying to make amends with his wife and his best friend, Nathan chooses to avoid his own problem and focus on Sam’s. The next morning, two head off alone to a chain of nearby islands in search of the secret pirate city Libertalia.

It’s easy to forget your troubles while hunting for priceless pirate treasure, especially with scenery like this. The archipelago is one of the most scenic locales in all of Uncharted 4, and not coincidentally, it’s also the most peaceful. Since Nathan and Sam managed to leave Rafe empty handed in Madagascar, there’s no enemies to worry about on these remote islands. As you drive your boat around exploring the caves and cliffs of the islands and listening to the gentle waves slap against the shore, and enjoying the bright blue sky on a beautiful day, the rest of the world feels so far away. It isn’t until Nate temporarily loses sight of Sam that his anxiety spikes and he’s briefly reminded of Elena and Sully. Adventuring is an escape for him, and he’s managed to escape to the most beautiful place in the world.

After following some pirate clues, the brothers find a pathway into the heart of the bigger island. Deep between the bluffs, they discover yet another clue directing them ever-closer to Avery’s treasure. When they resurface moments later, they realize the weather is starting to change. The once blue sky is now overcast and gray as thick storm clouds start to roll in, and the beautiful, idyllic archipelago begins to take on a more sinister vibe. Knowing how quickly tropical storms move, Nathan and Sam agree that they need to finish their investigation quickly and get off the island.

When you get back down to the boat, there’s a considerable amount of chop in the water. Suddenly your island escape has turned into a desperate race against the clock as you search for the next clue. When you reach the statue of Avery you’re looking for, the winds are picking up and the distant sound of thunder is starting to boom. Just as Nathan figures out their next move – the nearby Turtle Island where Libertalia is hidden – he also discovers that Shoreline thugs have picked up the trail. As he watches them swarm in along the horizon, it’s almost as though the storm itself is carrying them in.

We already know what happens next, because we saw it at the very start of the game. Nathan and Sam try to fight off Shoreline as they race towards Turtle Island but the storm makes it impossible to keep their ship upright. They’re shipwrecked and separated, and Nathan wakes up bruised, beaten, and alone. Their island escape from reality came crashing back down on them, literally and figuratively.

The foreshadowing at the start of the game gives us extra context when the weather starts to turn so that we know just how much danger Nathan and Sam are in, but the sequence works just as well without it. Our fear reaction to heavy storms is primal, baked into our genetic memory from a time when a sudden downpour might just kill you. The way the storm builds gradually yet quickly is so well done here because it inspires a primitive sense of dread. Even if you didn’t play the intro, you know that very bad things are about to happen. 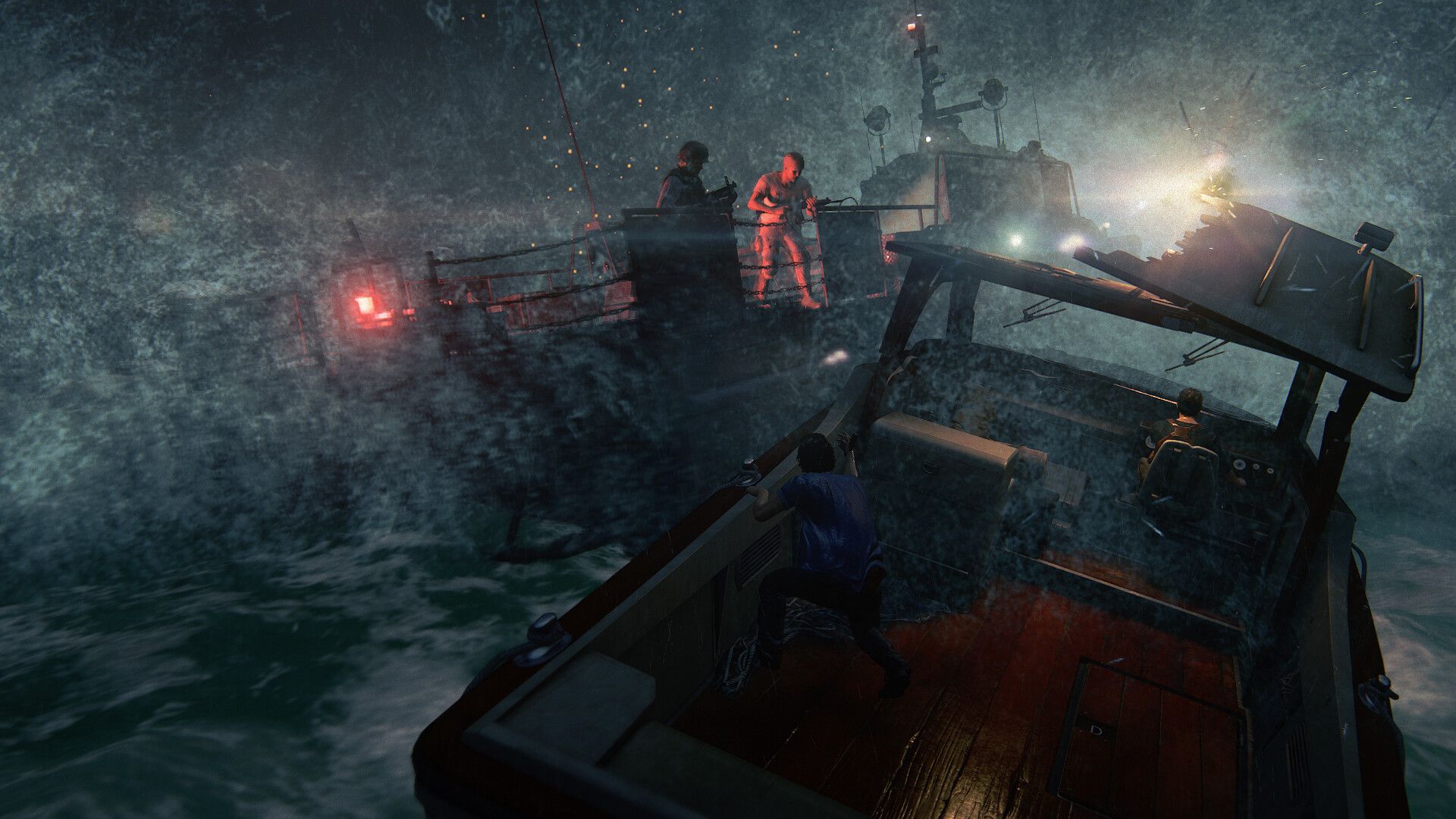 The contrast – that sudden feeling of reality crashing down upon you – is what makes At Sea such an iconic chapter. The archipelago itself is a stand-in for all the beautiful and exotic places Nathan has escaped to in order to avoid the challenges of a normal life, and the storm comes, as storms inevitably do, to force him back to reality. Naughty Dog has used inclement weather to represent hardship in The Last of Us series too, but never as poignantly as this.