Graphics card packaging is so boring these days. It's usually just a photo of the GPU itself on a dark background, which is deeply unexciting. But in the '90s and early-to-mid ‘00s, the art on graphics card boxes was absolutely unhinged. For reasons I'll never truly understand, manufacturers used wizards, weird little goblins, aliens, amphibians in mech suits, and other poorly rendered oddities to sell their graphics cards. Here are some particularly wild examples of this brilliantly chaotic aesthetic. This is how you get people excited about an expensive chunk of silicon. 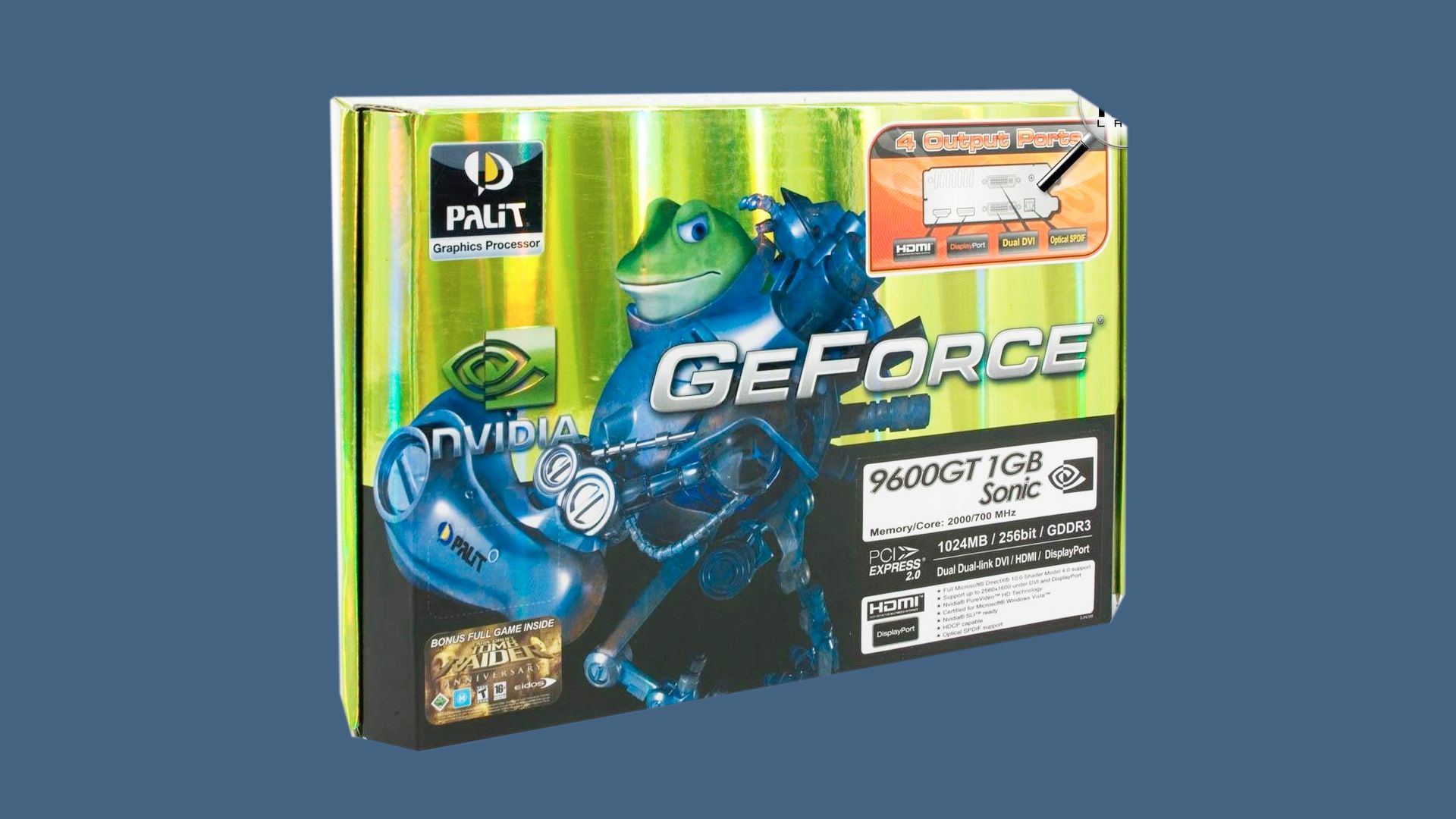 I don't know what inspired the marketing team at Palit to choose a frog wearing a mechanical exoskeleton as a company mascot, but I'm glad they did. Look at this little guy. Incredible. This GPU came bundled with a free copy of Tomb Raider: Anniversary, so they probably could have put Lara on the box. But nah: mecha frog. I know which I prefer. 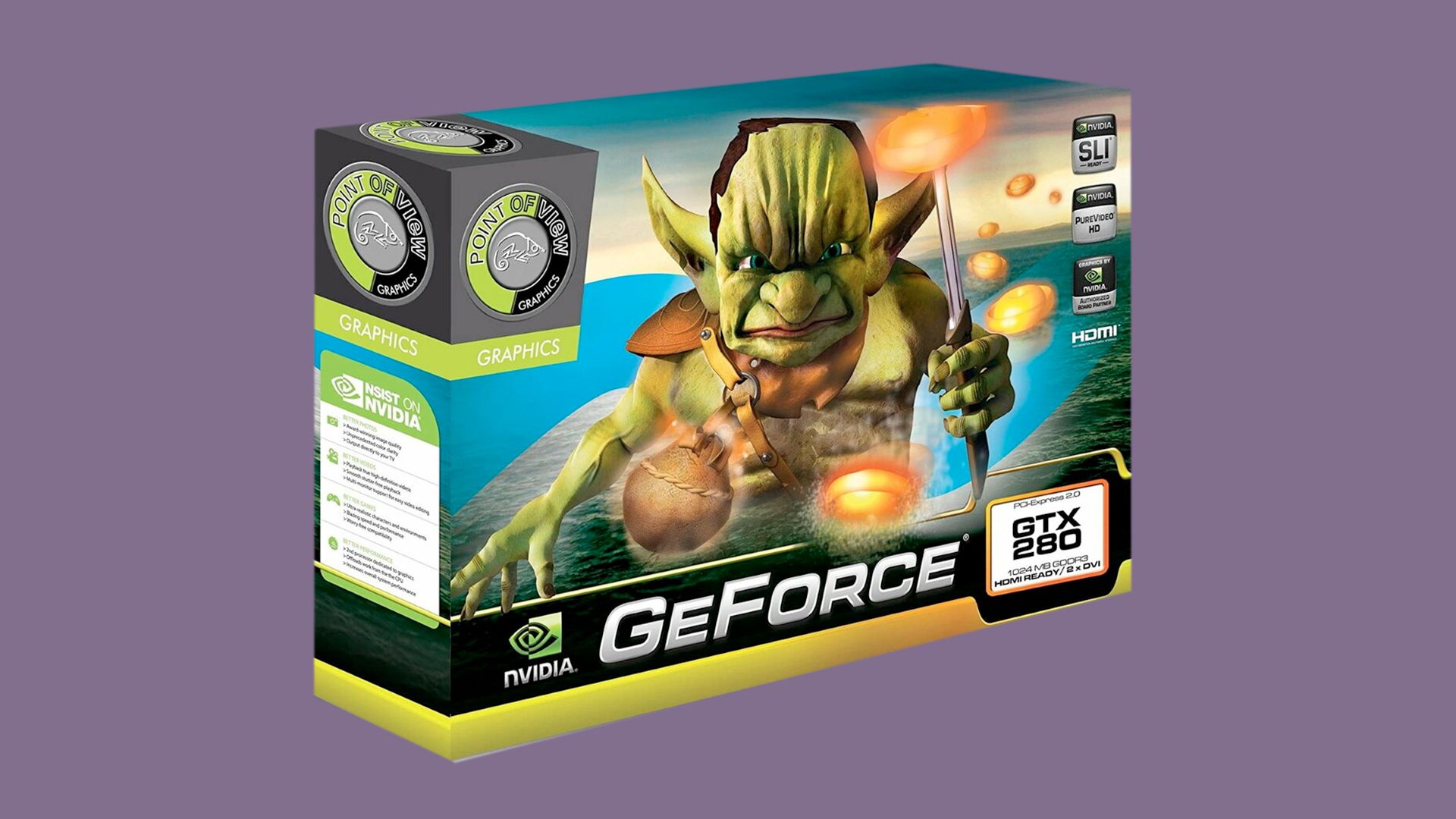 Now we're talking. Compare this to the soulless GPU packaging of today and you can see why the ‘00s were such a golden era for this stuff. What does a gross little goblin brandishing a knife have to do with cutting edge computer graphics? Nothing, but who cares. Put it on the box anyway, and have him emerging from a lake for some reason. Just do it. 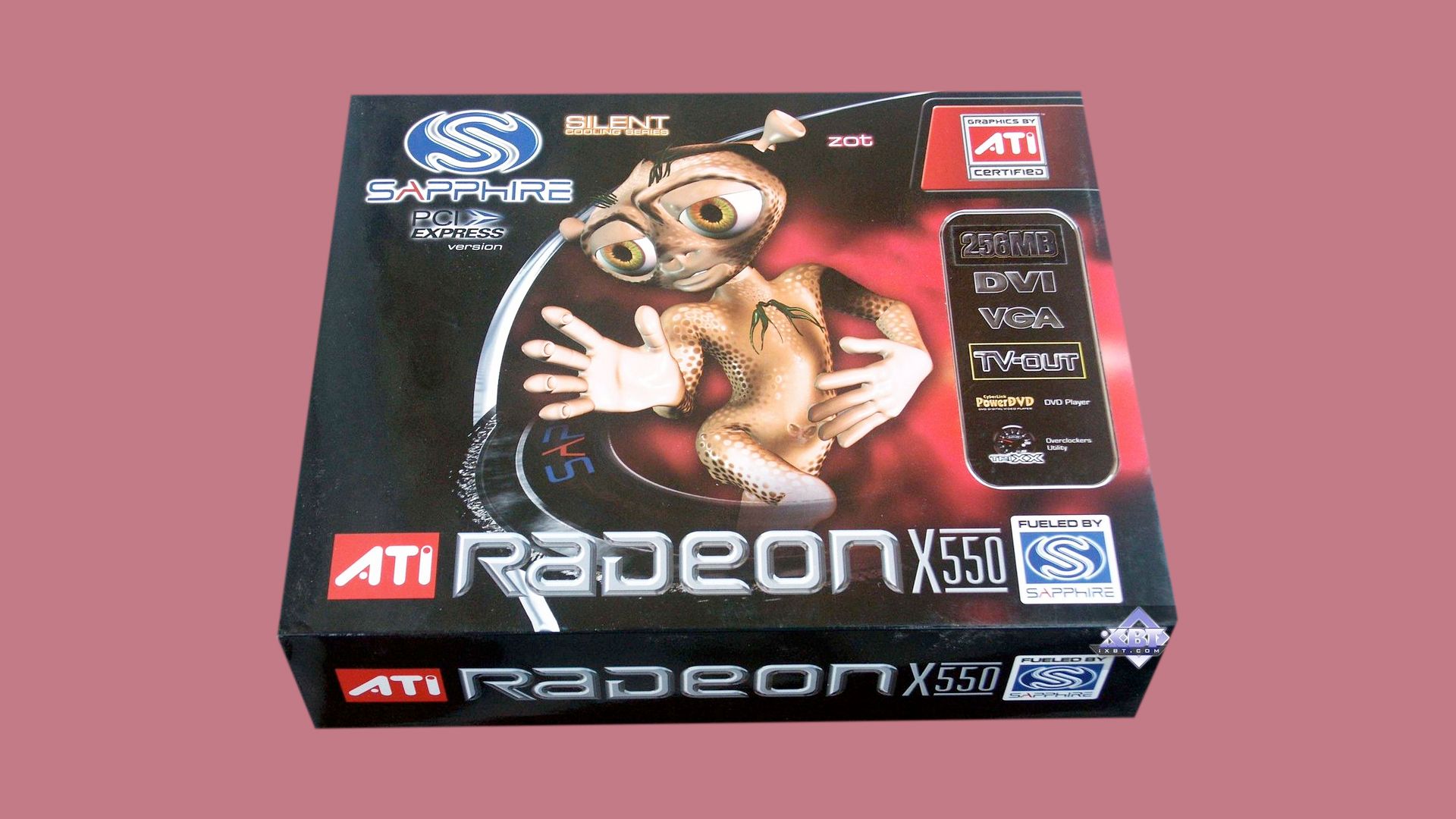 Woah. WOAH. What the fuck is this? Sapphire looked at what the other GPU designers were doing and thought, screw that: we'll invent our own little freak. This thing is like the result of an unholy union between ET and Shrek. That's weird enough, but why is it striking such a seductive pose? I don't wanna know what's behind that daintily raised leg. 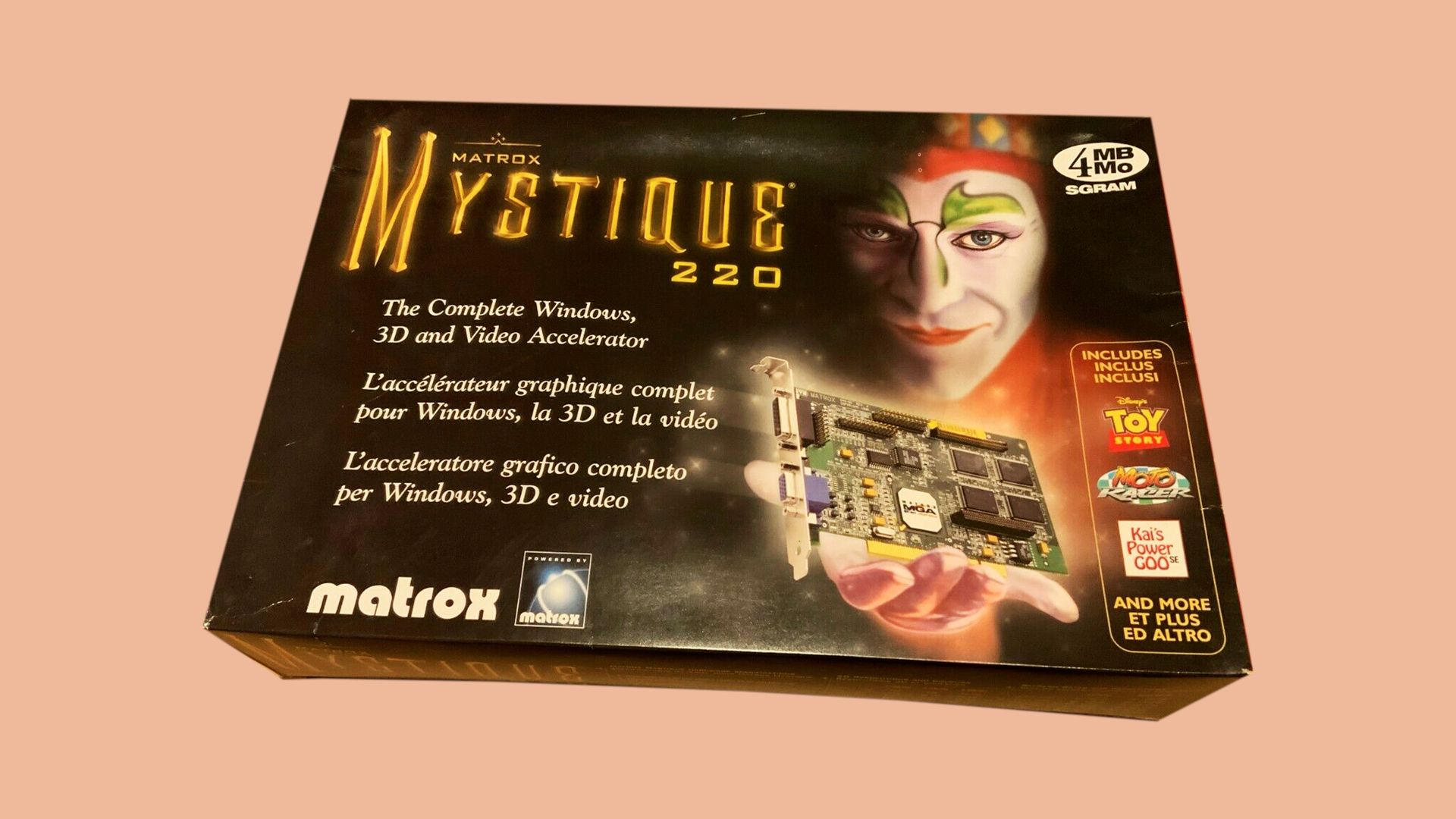 Back to the '90s now. This is a 3D accelerator, not strictly a GPU, but let's not get bogged down in details. Look at him. I don't know why Matrox thought the packaging for this product should be so sinister and unsettling, but here we are. Who is this eerie harlequin and why is he emerging from the shadows to offer me a 3D card? Stop. I don't want it. 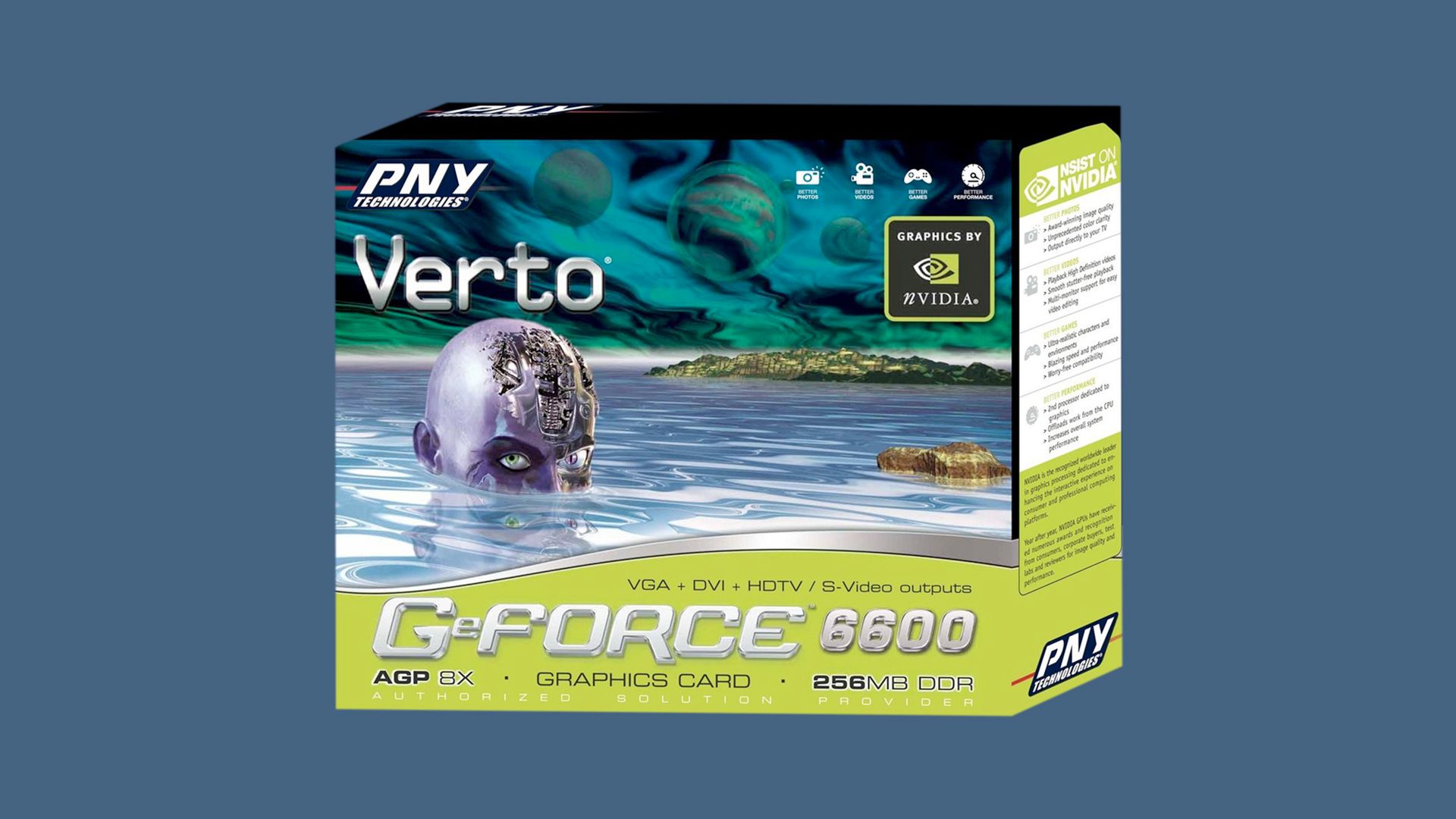 Wow. Lots going on here. We've got a cyborg submerged in the ocean, looking suggestively at the camera. We've got a weird alien sky with three moons, which would be a gravitational nightmare. Then we've got a distant island, which is presumably where our metal friend is swimming to. What does it all mean? I'd bet my house on: literally nothing. 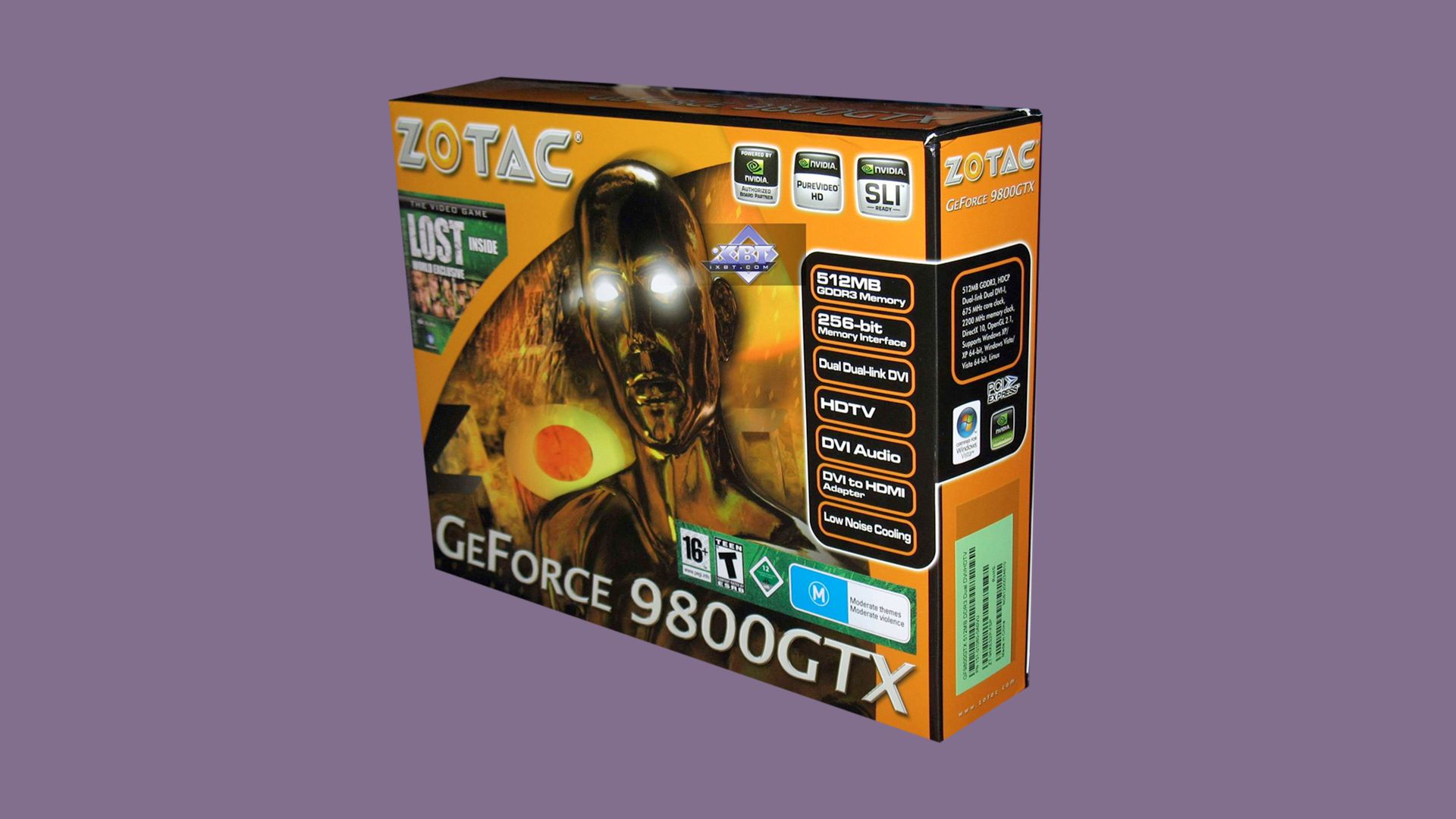 A lot of these are from 2008. That seems to be the year this aesthetic peaked. Granted, Zotac's effort here isn't as bizarre as some of the others featured in this article. But a shiny, scowling man made of liquid metal with scarily glowing eyes is still pretty freaky. A key aspect of these boxes is that they have absolutely no relevance to the GPU contained within. 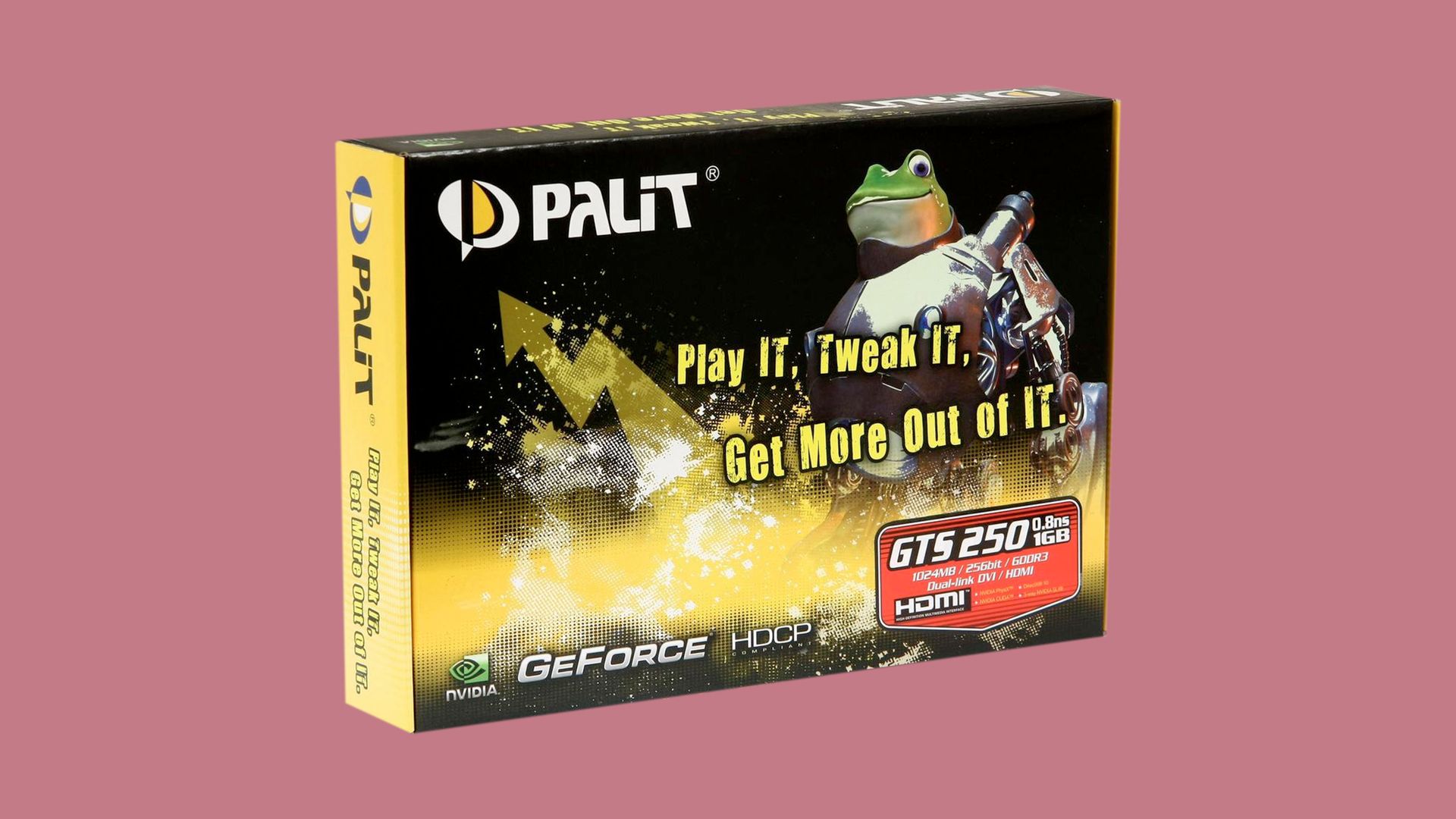 MECHA FROG IS BACK. I know I already talked about this guy, but I had to give a special mention to this packaging for the typography. In the early-to-mid ‘00s, this kind of 'distressed' text was all the rage. The graphic designers of the era bloody loved taking a bit of text, alternating the point size for no reason, and adding a layer of grime to it. 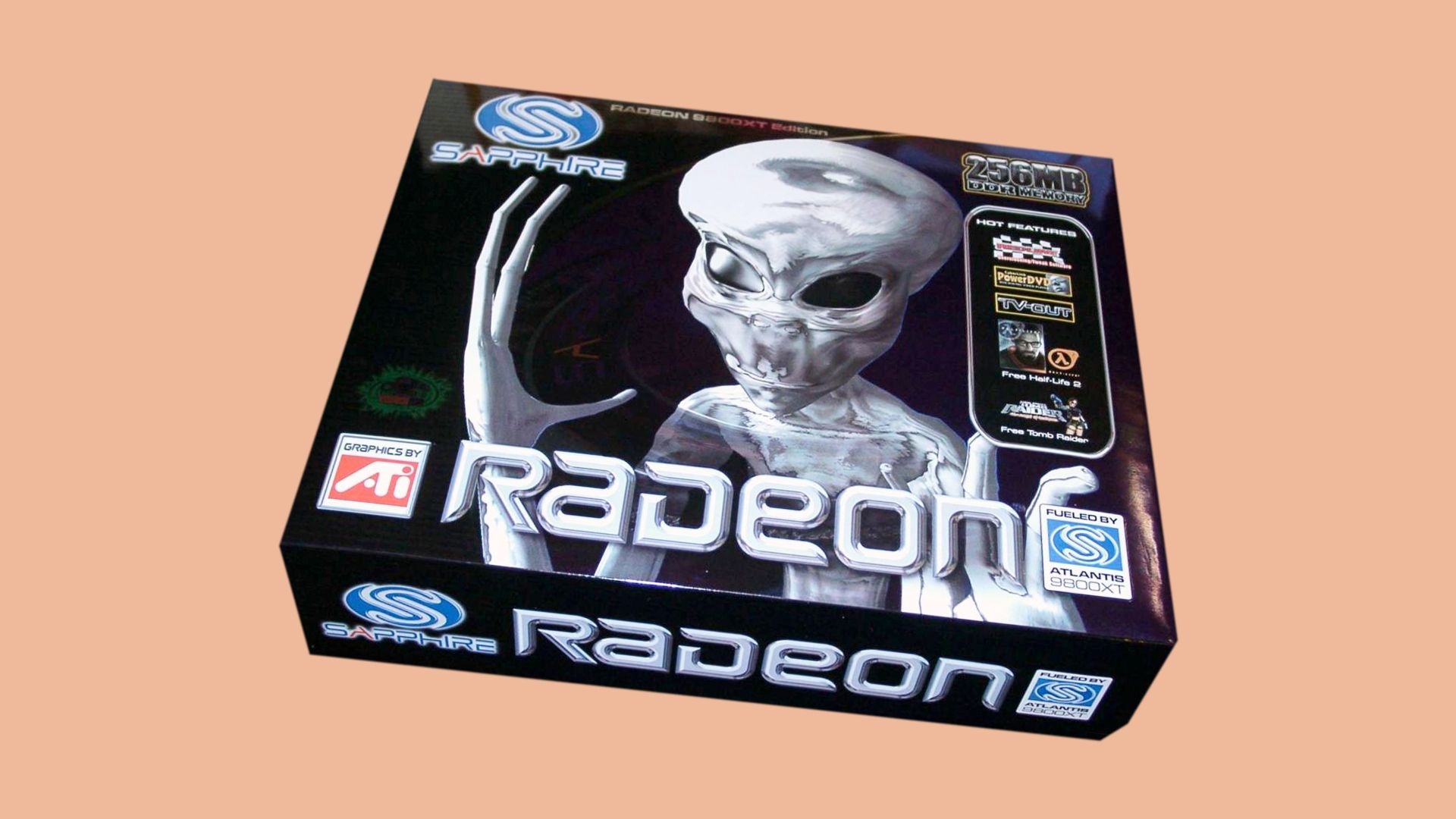 When this GPU launched in 2003, The X-Files had just ended and wouldn't return until that 2008 movie where they cast beloved Scottish comedian Billy Connolly as a paedophile. However, Sapphire's designers clearly still had aliens on the brain and designed this wonderful thing. I unironically love it, so there'll be no withering put-down here. Sorry. 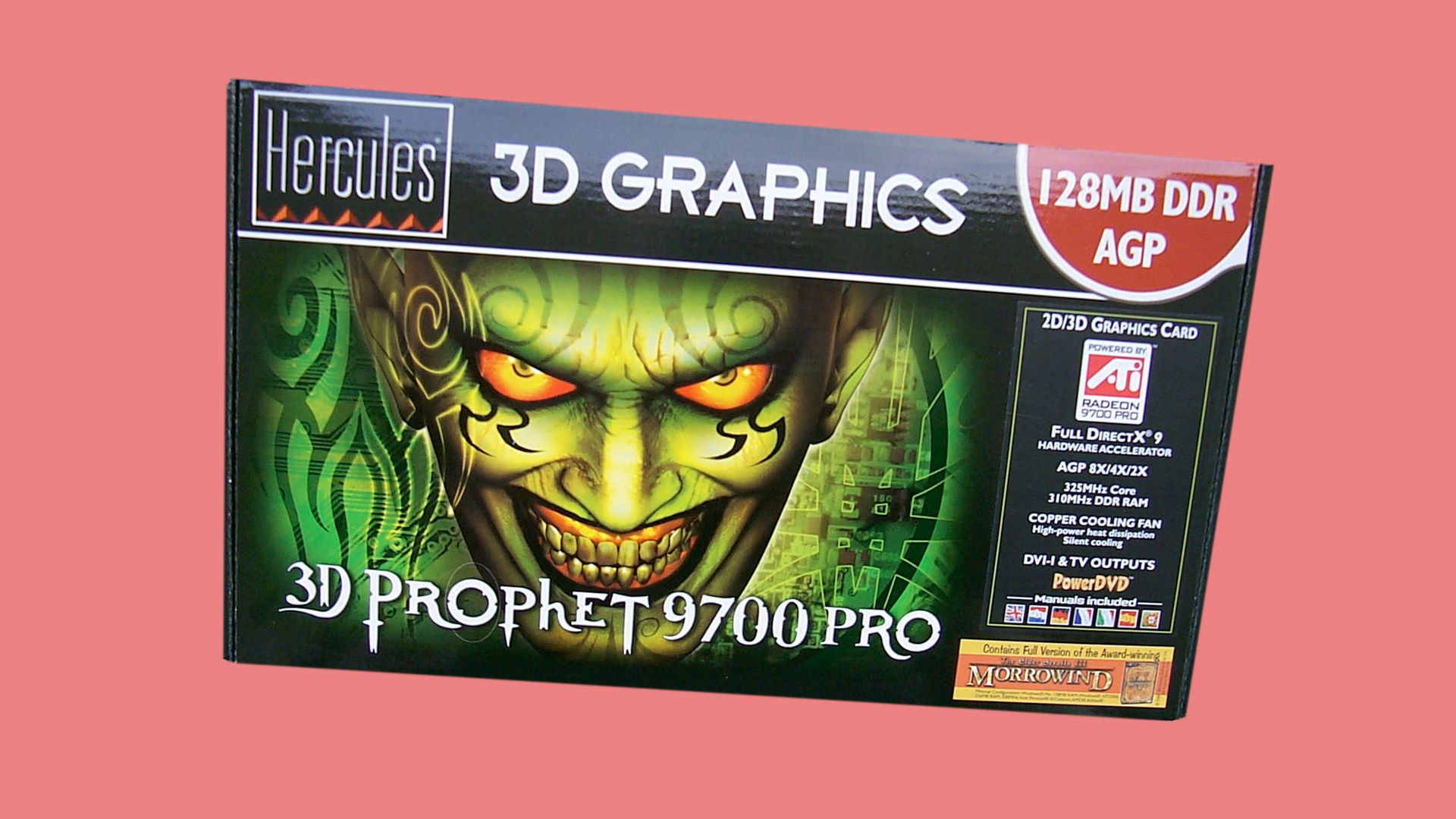 When Jared Leto was preparing to play the Joker, he reportedly saw this image and was so disturbed by it that he rushed to the Suicide Squad set and instructed the make-up team to replicate it. The rest is history. As if this utterly twisted and Jokerfied packaging wasn't 2003 enough, the designers went and added a bunch of tribal tattoos to it as well. 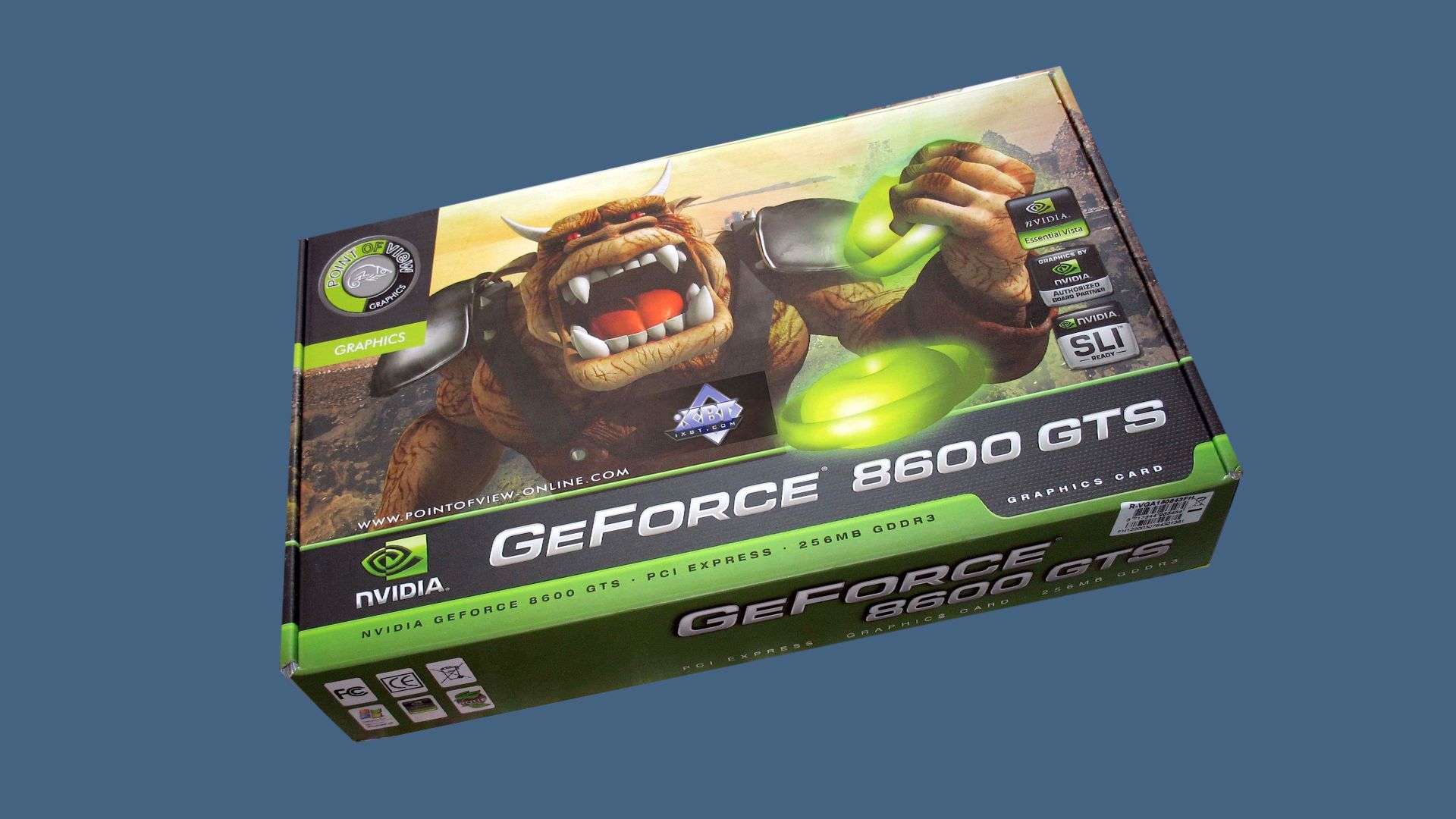 Here's another gem from Point of View, the oddly named company responsible for the knife-wielding goblin we featured earlier. I'm not sure what this snarling, armoured fantasy beast is supposed to be exactly, but I appreciate PoV picking a theme and sticking with it. But why, I wonder, is he grasping a piece of glowing radioactive tortellini? 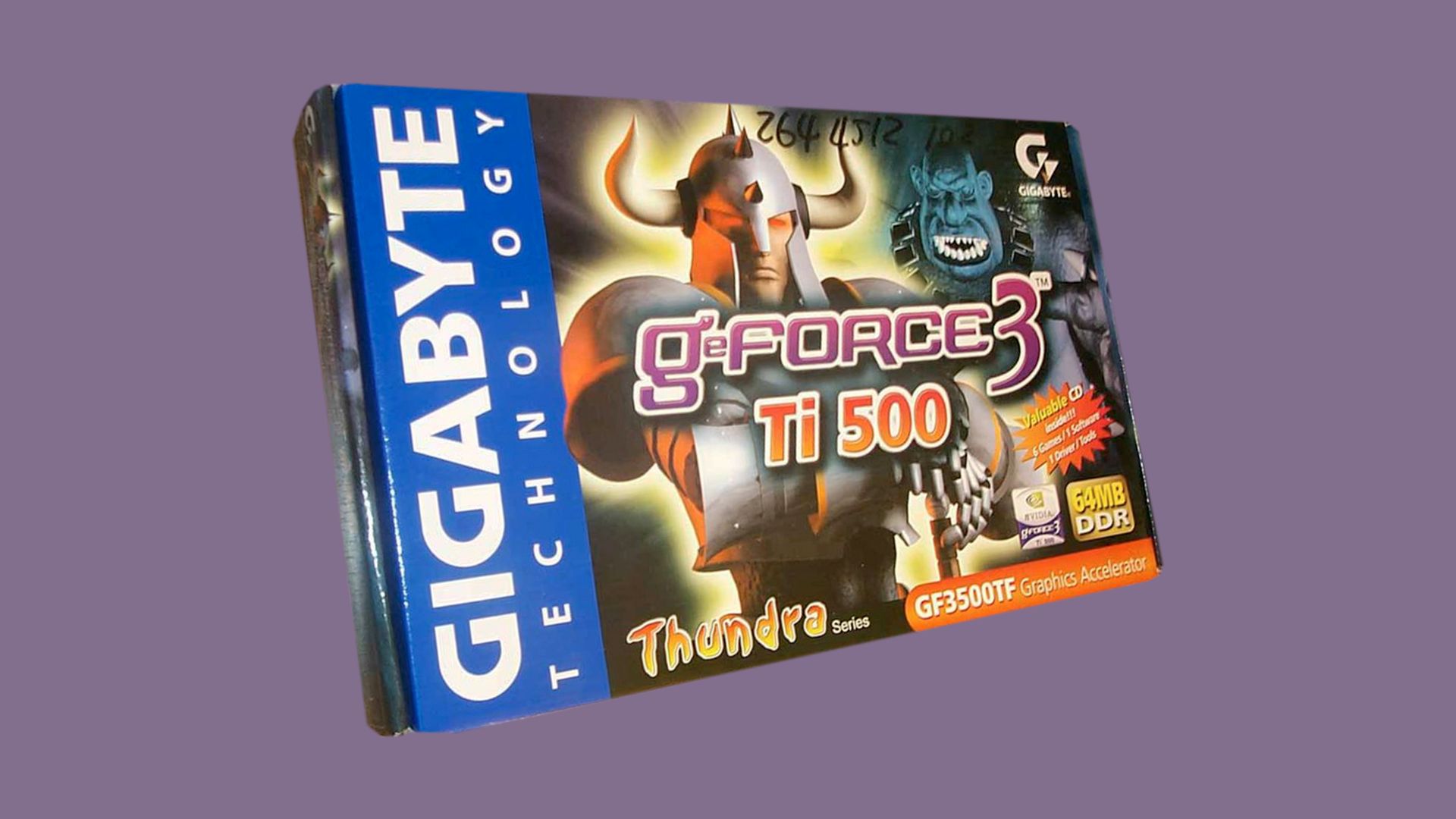 This one is worth featuring for the extremely extra name alone. GIGABYTE GEFORCE 3 TI 500 THUNDRA. That is how you name a piece of PC hardware. As for the art, well, it doesn't quite stack up to the power of the name. Even for a GPU box render this is poor. I don't know who's worse: the bored-looking knight or the ogre lurking over his shoulder. 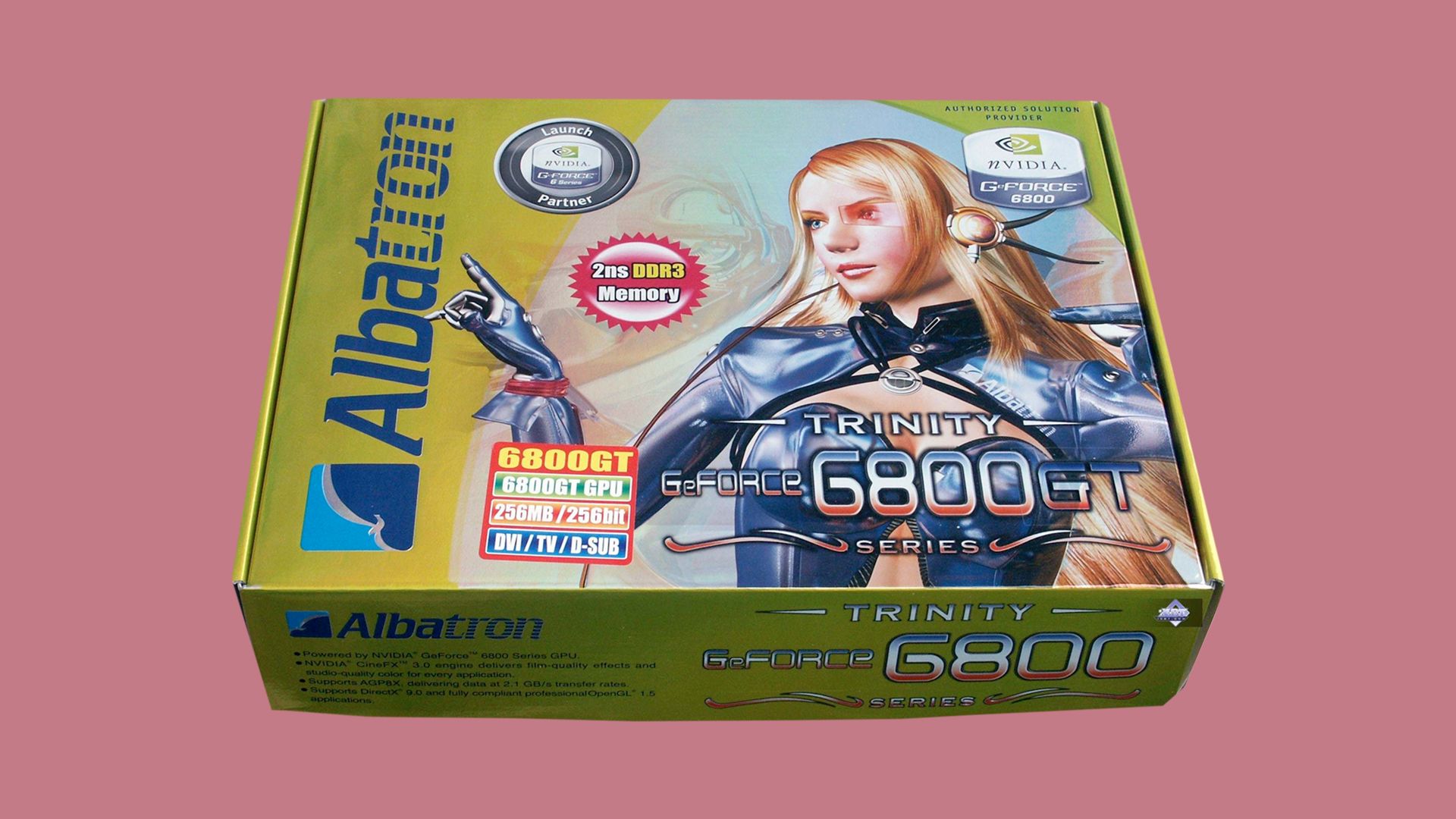 This is quite tame compared to some of the others, but I've included it because it's a perfect example of a common GPU packaging archetype: the cyber woman. You wouldn't believe how many manufacturers stuck a render of a usually blonde, usually busty woman on their packaging with a holographic eye visor. It was even a cliché in 2004. 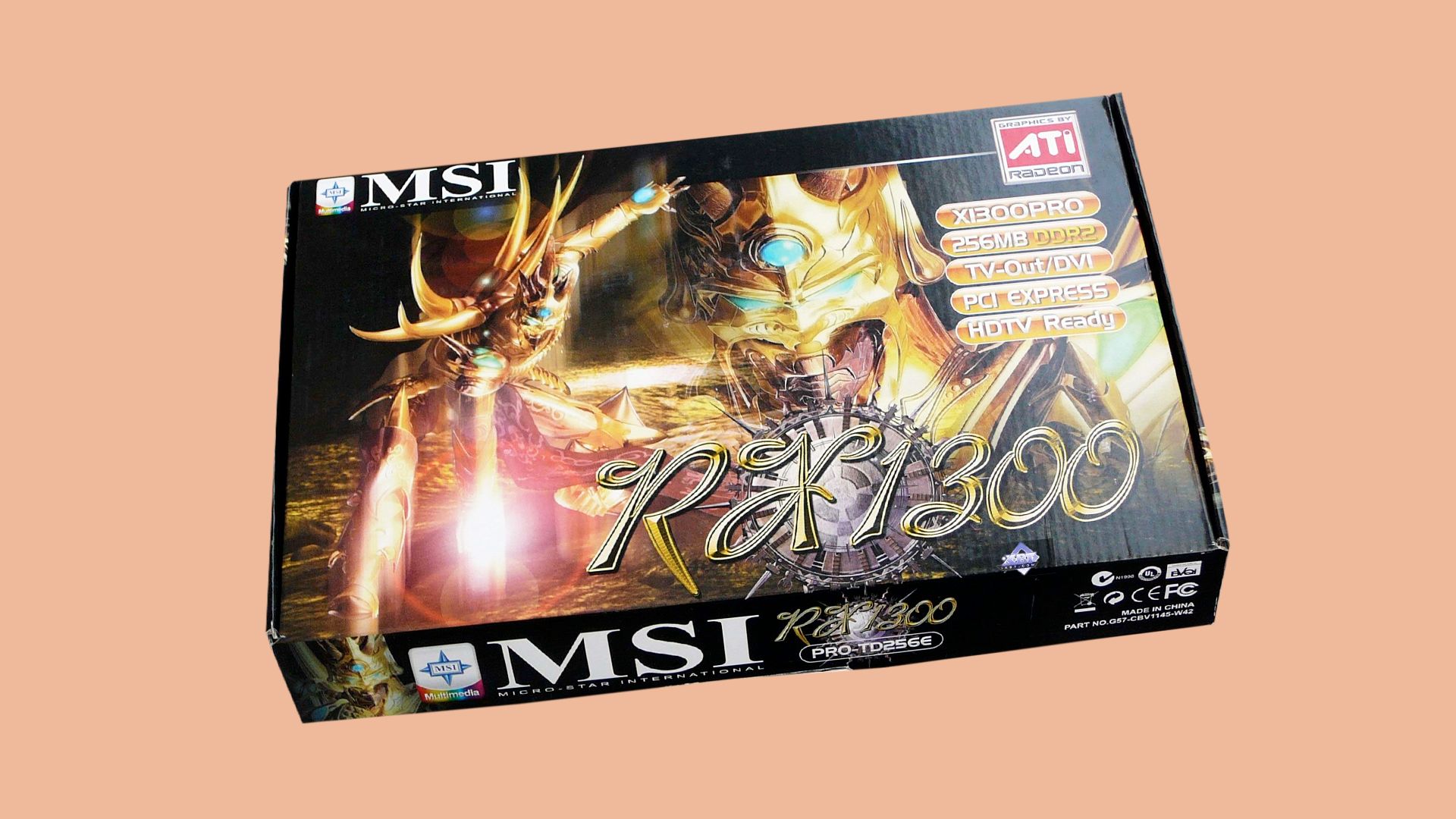 See this right here? This is a mess. There's a certain charm, an endearing kitsch, to the design of most of the boxes featured here. But this is just nightmarish. I don't even know what the render is supposed to be. It looks like an insect made of gold shitting out a lens flare. The typography is just as baffling, to the point where it's actually illegible. Awful. 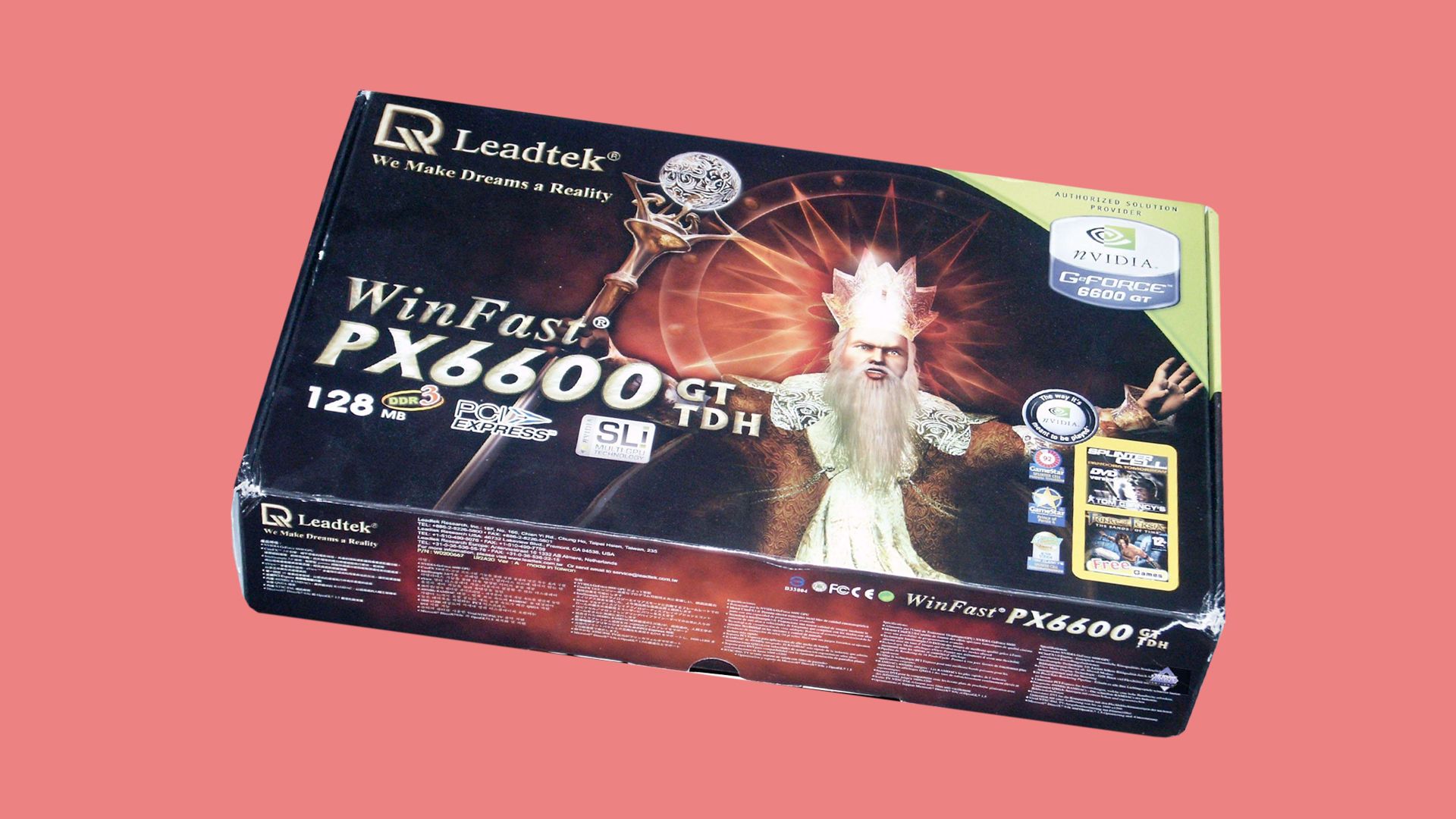 Hell yeah. It's Graphics Card Gandalf, here to help you get a decent frame rate on Splinter Cell: Chaos Theory, Battlefield 2, or whatever hot new game from 2005 you're trying to run. Credit where credit's due: Leadtek was the only GPU manufacturer to stick a glowing wizard on the box, and for that it deserves our respect. This packaging just exudes power. 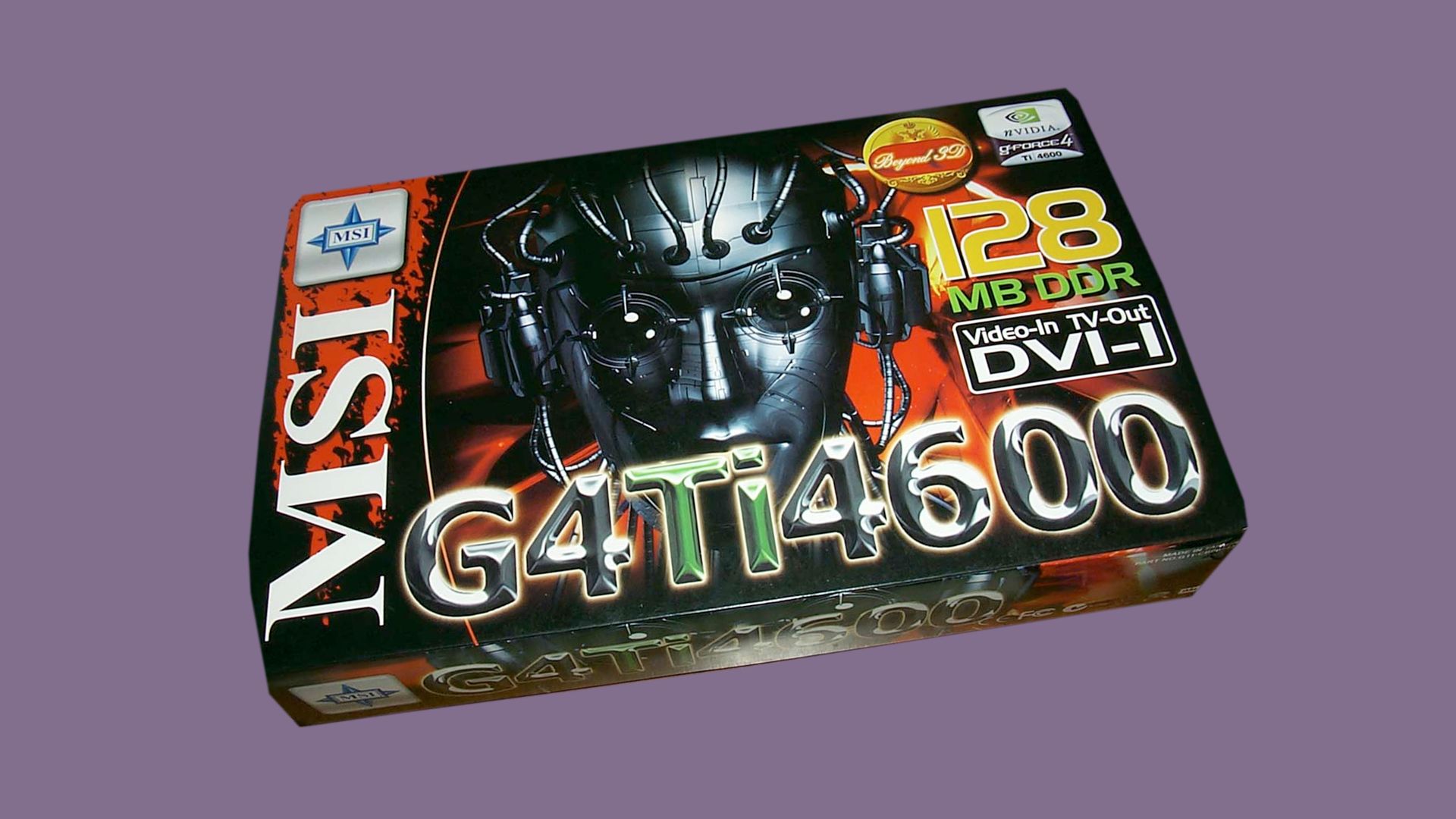 "What effects should I put on this text?" "All of them." This packaging is such a perfect relic of early 2000s graphic design. It's magnificent. The weird cyborg render. The stacks of text shoved into every available inch of empty space. The metallic, heavily embossed typography. It's objectively bad, but because of pure, blinkered nostalgia, I love it. 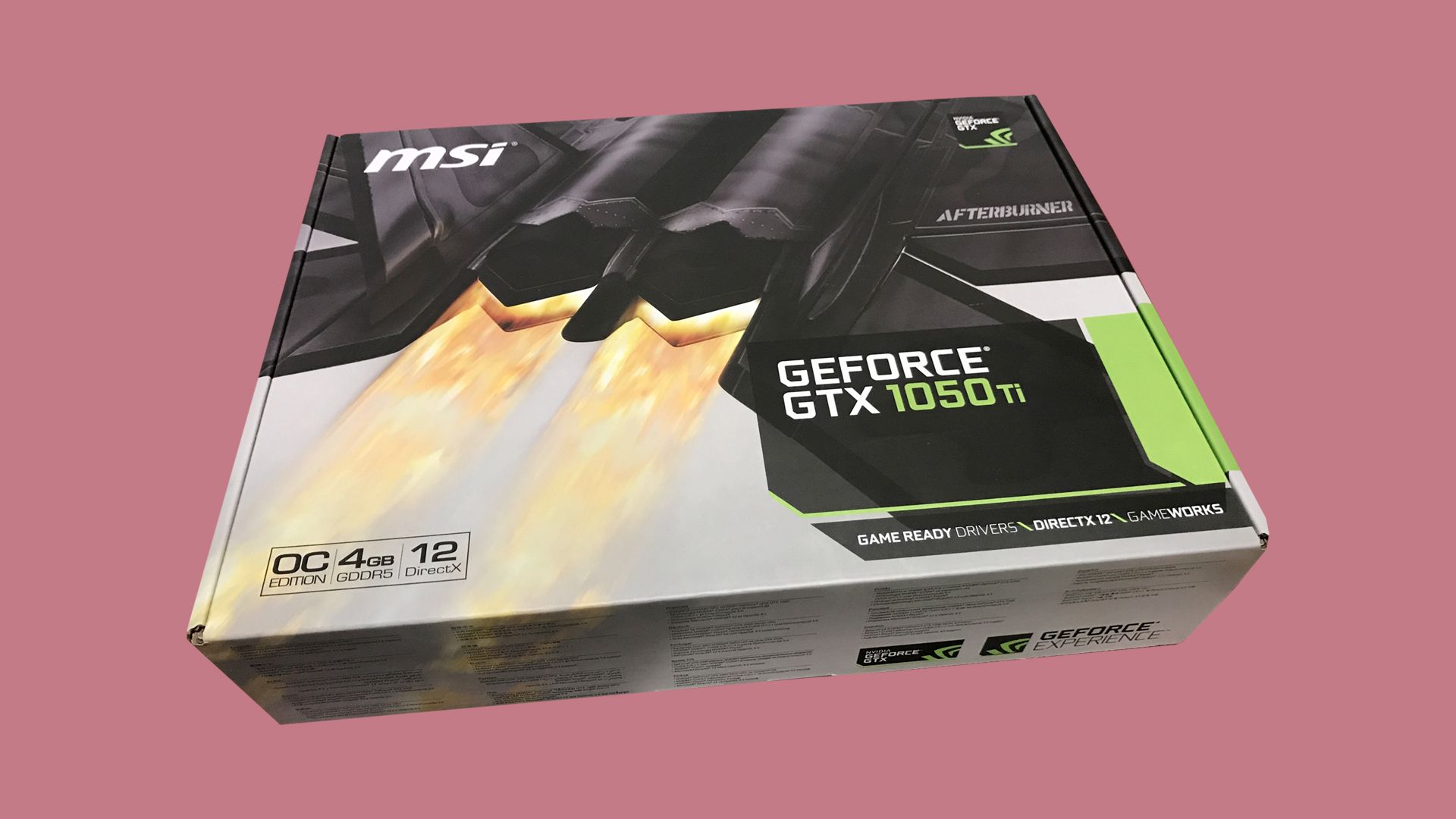 This one isn't even that old. While it's definitely more tasteful than some of the other monstrosities we've looked at here, it has a real mid-’00s energy. I'm not sure why. I think it's because the quality of the render isn't that good, and the image itself is quite corny. It's better than most modern GPU boxes, but sorely lacking a strange little 3D goblin.