“Knockout City’s aesthetics are designed to be loud and expressive with a ton of attitude,” says game director Jeremy Russo. “That gave us extreme amounts of flexibility to fully represent a wide variety of identities and cultures within the game. Because so much is built around style and showing off, players can be super proud to represent those identities and cultures. Together with our unique approach to our customisation system, we truly wanted to allow players to be who they wanted to be and shout it from the rooftops.”

Knockout City isn’t like a lot of other multiplayer games out there right now—you aren’t given a list of pre-written and designed characters but rather a character creator, letting you embrace your own sense of self. Any cosmetic goes with any body type, any hairstyle, and any skin tone, letting you be you. And that intrinsic tie to the loud and bombastic punk flair has made Knockout City a queer haven, something the devs have consciously woven into the design.

“The Knockout City team is diverse and passionate about these topics,” Russo tells me. “For most of these cosmetics, we source ideas and feedback from the queer community within the studio to ensure they are authentic, representative, and aspirational. Sometimes, we’ve also contracted members of our community to create special assets, and that’s something we’d like to continue doing in the future. We think this approach is especially important when our own team members aren’t members of the community the asset is representing. We want to get it right, and often the best person to judge that is a member of the community itself.” 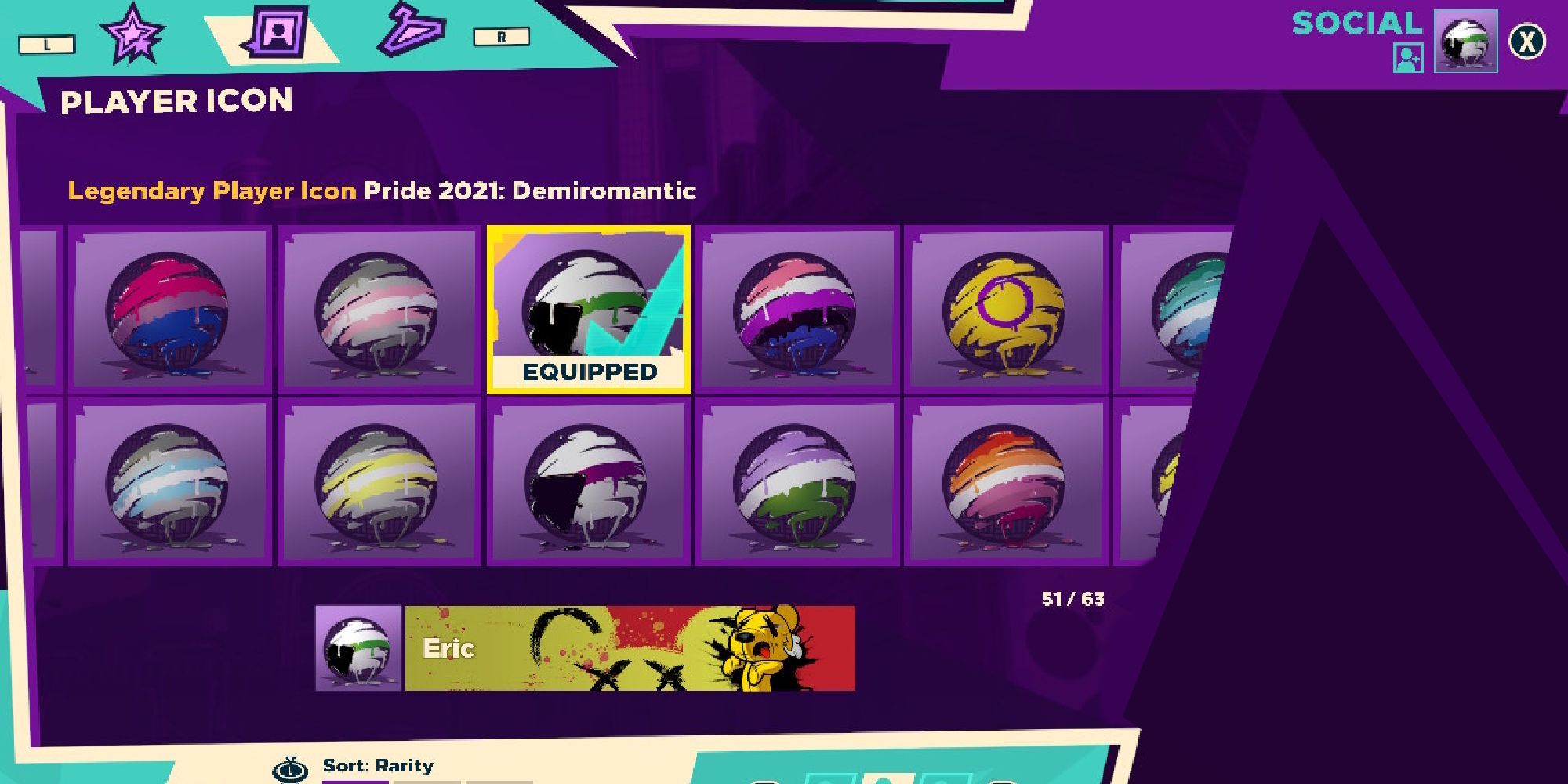 Toxicity in games is at an all-time high. Log into a Valorant lobby and you’ll likely hear bigotry and slurs over voice chat, and the same goes for League of Legends, Counter-Strike, and so many other games. It’s a dangerous world to navigate, but developer Velan Studios wanted to break that mould and let the players shape the community, using badges and other cosmetics to proudly build up a more inclusive game—bigots aren’t welcome here.

“Seeing yourself represented in a game can be both welcoming and aspirational,” Russo says. “A game like Knockout City letting you be who you want to be and express yourself the way you want to be represented, communicate that you are welcome in this world. Welcome to be who you want to be, no matter who you are. This is also communicated to the rest of the community who is welcome in the game. It’s impossible for a player to dive in and not realise what it stands for from an inclusivity perspective. I feel a great swell of pride for players when I go into a match and realise most have equipped a Pride icon, or a Black History Month icon. We have given the players the tools to show what kind of community they want this to be, and they have done just that.”

Community manager Lynn Richter echoed this sentiment, talking about designing the icons that players use to represent themselves and their beliefs: “When we created these icons, we set out to make sure that every person who wanted to represent themselves in our game had an opportunity to do so. Many of us in the studio know what it’s like to play a game where you don’t identify with the main character and you lack the ability to customise them to fit your personality and we didn’t want that to be the case in our game. We have a wide range of identities here in our studio, so it was important to us that we represented each of them in their own unique way. So often, you’re forced to choose an identity that’s ‘close enough’ but not quite right, so we made 21 icons ranging from bisexual to deminonbinary available to everyone, for free.

“Since we released the Pride Icons, we’ve seen new faces in our community stopping by to say how much they appreciate the ability to accurately represent themselves with the Pride Icon that they identify with. I find joy knowing that people were empowered to not only customise their character to fit their style but also got to equip their chosen icon to identify themselves exactly the way they want to be seen.”

But it’s much more than just flags and logos—representation is baked into how you can design your character, in what you choose to wear. “When creating the cosmetics and customisation systems for Knockout City, we had two main goals—expression and personalisation,” Russo tells me. “Expression is important for a competitive game as it allows players to celebrate their successes and show off. This is why we have so many over-the-top intros and victory poses, KO effects, taunts, ultimate holograms, etc., but we also felt personalisation was important too, especially for a game like Knockout City where you are seeing yourself in third-person at all times, as well as seeing your opponents as you square off face-to-face, throwing and catching dodgeballs with each other. Having your identity, or even your alternate identity, represented on-screen during those moments can be really meaningful.”

Mixing that idea of expression and personalisation with game design was a challenge that Velan Studios was more than willing to tackle. “With the cosmetic and customisation system, we tried to strike a balance between giving you the ability to represent as wide a variety of people as possible with a simple system that wouldn’t bog down your time,” Russo says. “Basically, we wanted to combine some of the benefits of the systems that let you unlock entire character skins (allows for over-the-top designs, and is fast for players to customise), the benefits of the systems that let you customise every aspect of a character (extreme personalisation, can truly represent yourself or your alter ego). The result is the system we have in Knockout City where you can unlock wild outfits hand-crafted by our talented artists, but can apply that to dozens of faces, hairstyles, skin colours, and many other smaller details.

“You won’t get lost for hours adjusting your cheekbone height or nostril size, but in a matter of minutes, you can construct a highly unique character representing any race, gender, or style you want. The biggest achievement here we are most proud of is how we allow any cosmetic choice to go with any other cosmetic choice you want. You can represent yourself the way you want to be represented.”