There’s a TV on in your house at the beginning of High on Life. On it is a surrealist ad for a nonsensical product called This™ – the kind of Interdimensional cable commercial Rick and Morty would briefly gawk at before flipping channels. When it ends, a weird little guy named Kenny appears and introduces a movie, Cryptkeeper-style. It’s 1994’s Tammy and the T-Rex starring Denise Richards and a then-unknown Paul Walker. Just like RoboCop, Walker is a high school football player that gets mauled by a lion and has his brain transplanted into a robot dinosaur. Alright, maybe not just like RoboCop. Baffled, I watch for about five minutes before I look back at Justin Roiland and Squanch Games EP Matty Studivan – who have been watching me watch TV for the first half of my play session – to ask if this is a real movie. “Ya,” Roiland says. “You can watch the entire thing in the game. It’s insane.” At this point I’m not sure if he’s referring to movie itself or the fact that the studio licensed multiple full-length feature films for the sake of a very stupid, very missable joke.

I already love High on Life. The thing you don’t get from the trailers and clips they’ve shown so far is just how fully realized the world is. The jokes and dialogue are just one piece of a whole that creates a world so bizarre and absurd you can’t help but let your guard down and just enjoy the ride. Squanch Games has created an M-rated amusement park here, and its crass, self-referential humor is not only fitting, it's totally enjoyable. As our own Rhiannon Bevan wrote in her Gamescom preview, “Out of context on Twitter, these lines might make you roll your eyes, but the stupid world you’re immersed in makes it hard not to smile.”

Fans of Trover Saves The Universe, Squanch Games’ previous, VR-focused title, will recognize High on Life as an evolution for the studio. It uses the same style of meta humor to interrogate the video game tropes and conventions we all take for granted, while presenting as a more robust, fully-featured experience. This is clearly the studio’s swing at a triple-A style of first-person shooter, and while some may accuse Roiland of resting on his laurels, no one thinks about toilet humor as deeply as he does.

Take the Gatlians for example, the sentient race of gun-shaped aliens that serve as your arsenal in High on Life. Many of the Gatlians, like Creature (voiced by I Think You Should Leave’s Tim Robinson) have exposed genitals – leaky buttholes and, in one piece of concept art, hairy, udder-like breasts. Buttholes are funny, as I’m sure we can all agree, but Roiland isn’t just slapping anuses onto monsters to get a laugh. 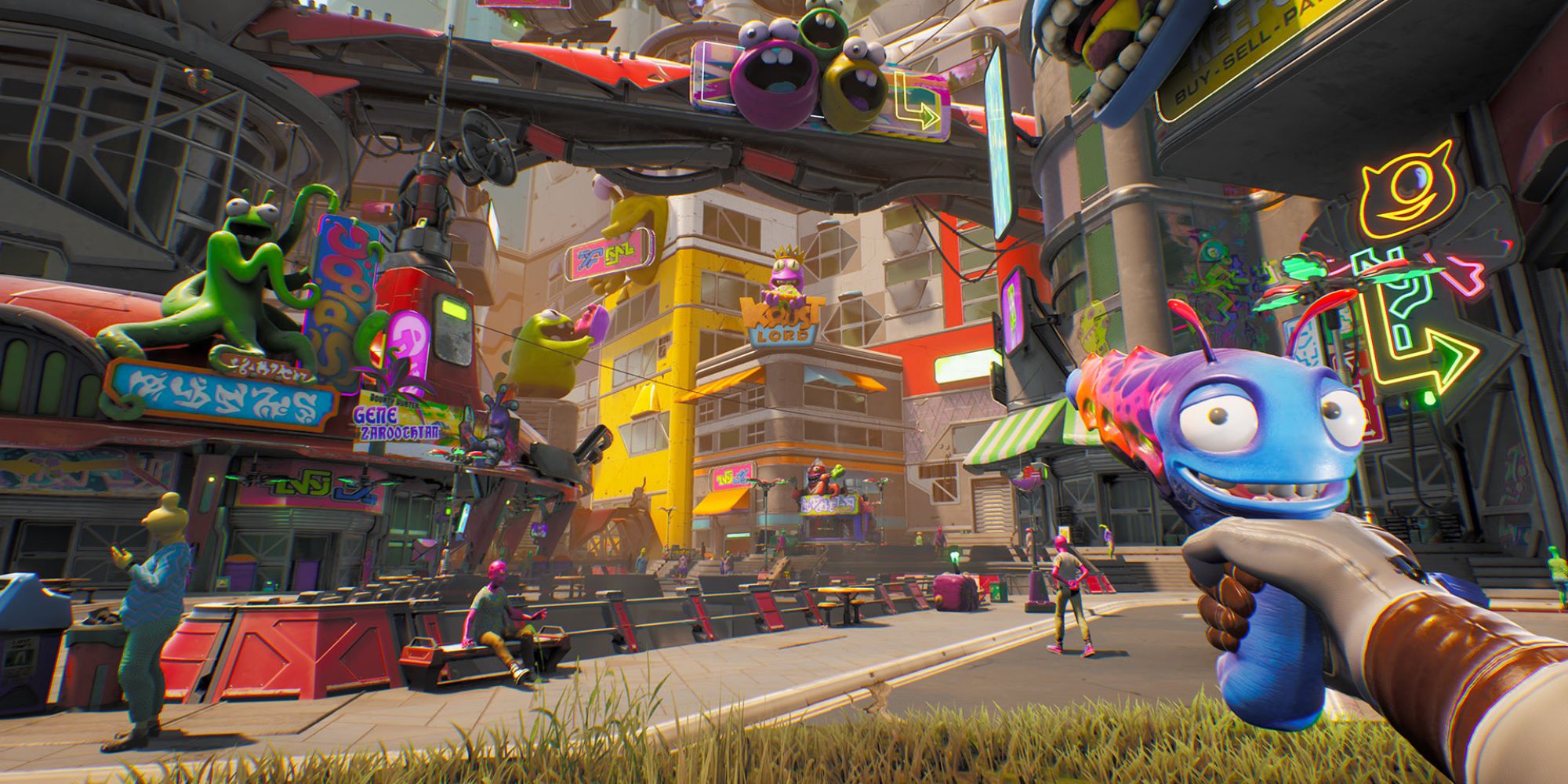 “For me with aliens – and this is what I think about across all my stuff – my perspective is that this thing evolved in a specific way, and we can’t judge that,” Roiland says. “On Earth there’s literally a snake that looks exactly like a dick. You would 100 per cent think it was a dick if someone showed you a photo of it.” Roiland has the entire history of the Gatlian race worked out. Details of their home planet, the way they evolved to be the dominant species, even other creatures that exist there and how they fit into the biological hierarchy. He described the slug-like way they move around, inching across the ground with their gun barrels behind them. “We even did some test animations to see how it looks and feels. It’s pretty cool. It works and when you see it makes sense.” There’s a lot that goes into the making of a talking gun with a butthole.

As we talk, Roiland goes deeper and deeper into the lore High on Life, explaining the intricacies of how the guns fire (the triggers are not their dicks, for the record) and how the intergalactic cartel used override microchips to use them against their will. There’s also a virus the cartel used to zombify most of the Gatlian race and surgically graft them onto their bodies. Then he gets into other alien species and breaks down the complexities of each of their anatomies. “Gatlas is very much in the background of this particular story,” he says. “But we really know that world and what happened there and why it happened. I’ve been living with this thing for six years.”

Roiland loves deep world building. “It’s my favorite thing,” he says. “On Rick and Morty, almost every episode we get to create a whole new world and think about the rules and all kinds of shit people will never know about. This game was that times – fucking, I don’t even know. Narratively, we’re world building and we want that world to feel real. There’s so many species, so much backstory.” He slipped back into another lengthy description, this time of the translator microbes, a highly contagious but harmless virus that allows you to understand alien languages in English. “I need my sci-fi to have explanations and logic,” Roiland says. “It needs a solid, sturdy foundation for me to [be happy]. We think about a lot of that stuff in the game.” 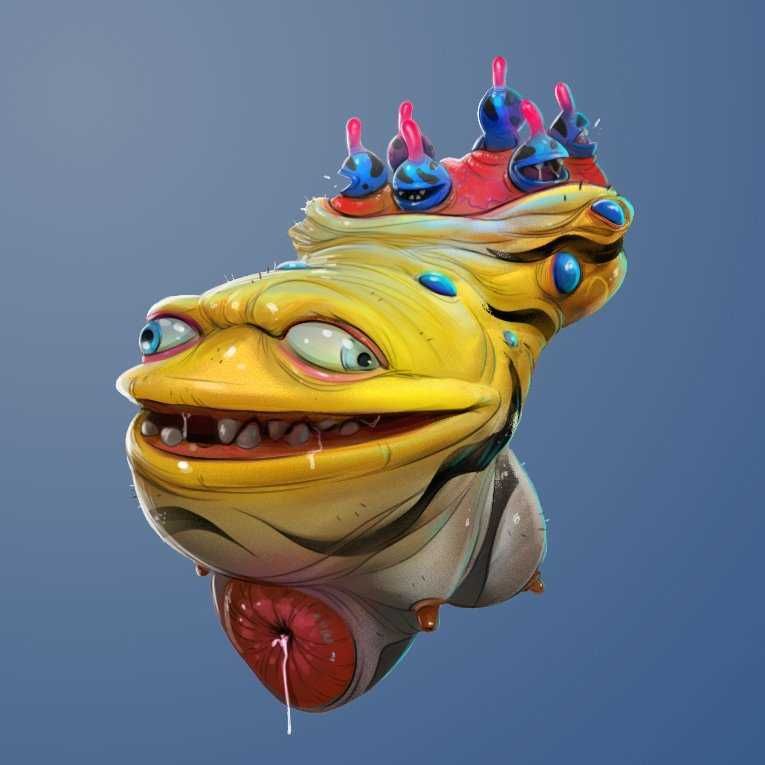 If you didn’t know Roiland’s work, his descriptions might make you think High on Life was actually a horror game. The title itself is actually a reference to the central conflict. The alien cartel that invades Earth is kidnapping humans and using them to get high. Roiland describes the sensation of being stuck inside a hyperbong as being stuck in sleep paralysis. You can’t can’t move or scream, but you’re fully aware that you’re slowly being consumed. High on Life is a comedy game of course, but as a lifelong fan of horror, Roiland loves exploring macabre scenarios too. “My desire was to handle that stuff in a really grounded, horrific way,” he explains. “There are moments in the game where we try to let that stuff breathe and make people feel uncomfortable. Despite it being a comedy game, it’s dealing with addiction and it’s dealing with drugs, but it’s flipping it on its head because we are the drug.” Roiland says that the moments of tension and terror were his way of making the player care about the stakes “It’s hard in a comedy where everything’s a joke, you want players to actually care about their role in the story and think that what they’re doing is impactful.”

High on Life is the fourth title from Squanch Games, but Roiland says the studio is just getting started. The game is getting a lot more attention than Trover and their previous games did, and he’s excited not just to see how people will react to it, but what they’ll be able to do in the future, too. “All we really care about at the studio is making cool shit, and in order to do that we need to have a little war chest of money,” he says. “Instead of going hat in hand to Microsoft or Sony and saying ‘hey, here’s this awesome game we want to make,’ we want to get to a place where we don’t need to do that, we can just make a cool thing and ship it. That’s the dream.” Roiland says the studio wants to do more in the High on Life universe, but also smaller games, pixel art projects, and experimental games. “The sky’s the limit,” he says. “We have an amazing team and I have so many ideas.”