Each level of Kirby And The Forgotten Land has its own set of secret objectives. Most of them involve collecting a handful of items or finding a hidden area. The only hint the game provides is the name of the objective, and some are more descriptive than others. The first stage of Redgar Forbidden Lands – Enter The Fiery Forbidden Lands – has a particularly vague one: "Find The Secret Passage".

As you'd guess from the name, this stage has a lot going on. Finding a secret passage is hard when you're focused on moving Kirby out of the way of giant lava balls. You might need sharp eyes for this secret objective, but it is an easy step towards 100 percent completion if you know where to look.

Where To Find The Secret Passage 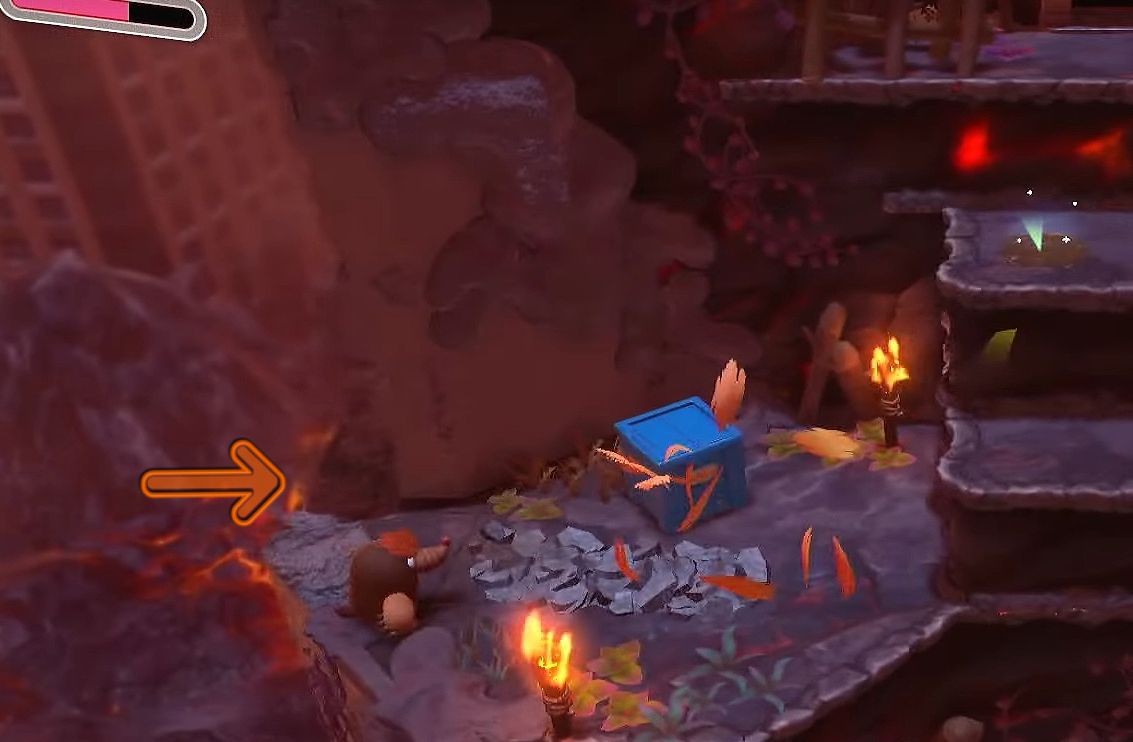 The secret passage is located around the midpoint of the level. At the end of the second area, you should see an exit door behind a moving staircase. Off to the left is a Digguh (a mole-like enemy) and seemingly not much else.

Kirby will have to dispatch the Digguh to get to the secret passage, but don't be so eager. The passage is on the other side of a fence that you have to dig under. So, if you don't already have the Drill copy ability, discard whatever you have now and inhale the Digguh.

Enter The Fiery Forbidden Lands is pretty focused on the Drill copy ability and its evolutions. Three of the four Hidden Waddle Dees in this level require Kirby to tunnel under a fence at some point.

One other mission, "Destroy Seven Falling Lava Balls", is only possible by activating Water-Balloon Mouth at a hidden pipe. The pipe is located near one of those three Waddle Dees, so yes, it also requires Drill. As a rule, if you see a yellow fence with a picture of a mole, it's Driller time. Thankfully, there's almost always a Digguh or other means to gain the copy ability nearby.

Now that you've dug the Digguh's grave, the way to the passage is open, if hidden by perspective. At the leftmost edge of the area, there's a narrow ledge wrapping around the side of the cliff, partially hidden by shadow. Head down this way, but watch out for the two Noddys blocking the path.

Kirby will take damage if he runs into them, but since they're fast asleep, they won't attack. Using Drill attacks on such a narrow ledge might be dangerous, so just jump over the enemies and climb up the ladder. Here's the yellow fence. Use the Drill to dig underground and come up on the other side.

What's In The Passage

The "Find The Secret Passage" mission should clear soon after passing the fence. At this point, you can just turn around, head back to the exit door, and proceed to complete the stage. But you shouldn't! Collect all the Star Coins lying around, and keep moving forward through the ruined building.

The hallway will wrap around until you're on a ledge above the exit door. There's a chest here. Open it for a red Capsule. Getting the Capsule isn't required for 100 percent completion of this stage, but it will give you a random Vol. 3 Gotcha Figure.