Kirby's Dream Buffet is a celebration of the pink puffball's thirtieth birthday, so it's only natural that some of his most iconic Copy Abilities make an appearance. Re-imagined around the game's food theme, the Food Copy Abilities are crucial for winning races and fighting off opponents in Battle Royale.

We've ranked every Food Copy Ability in the game according to its overall usefulness. Use each in the right situations to grab as many strawberries as you can and drive up your score – just be sure to watch out for your opponents, who will try and use their own attacks on you! 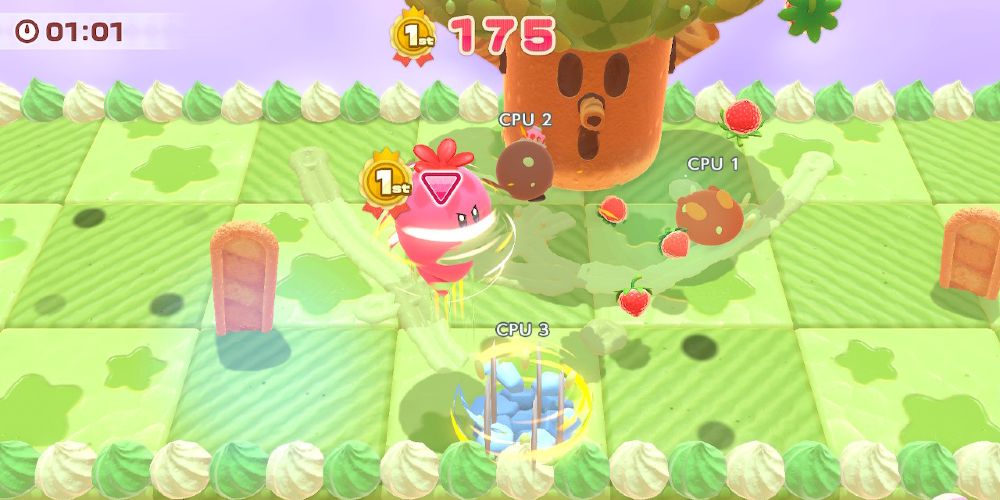 Drill is one of the best Copy Abilities in Kirby And The Forgotten Land, but in Dream Buffet it's too hard to use effectively. When it's activated, Kirby digs underground, where he is able to move freely without worrying about enemy attacks until the ability expires. You can also pop back up early by pressing the Copy Ability button again.

Drill damages any enemy or opponent that Kirby hits while he's digging into or out from the ground, but the delay on each make it hard to get any hits without a healthy dose of luck. You also can't collect strawberrieswhile underground, making Drill the only Food Copy Ability that can actually prevent you from increasing your score. Drill is best used as soon as possible when it's acquired so that you have room for a new power as soon as you hit another item box. 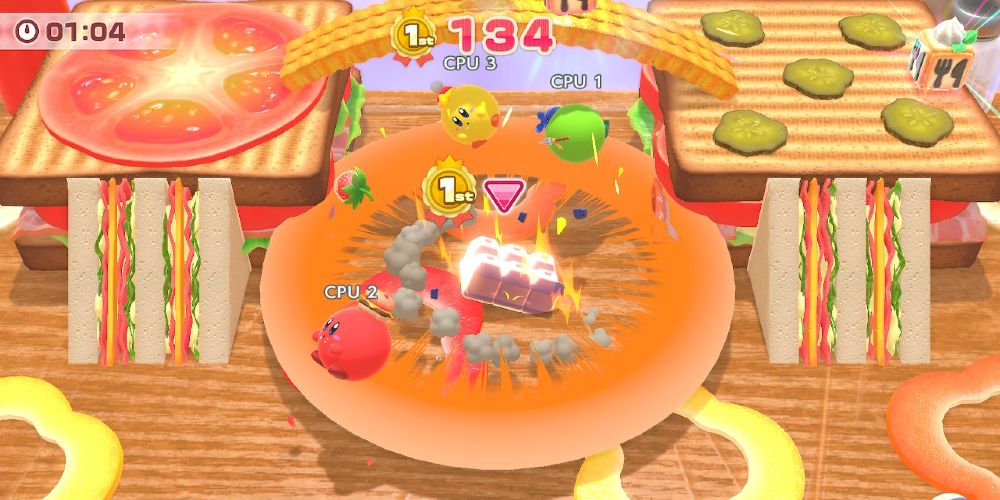 While Stone might be a devastating component of Kirby's arsenal in Super Smash Bros, its slow speed in Dream Buffet leaves something to be desired. However, if you can use it while your opponents are bunched together fighting over strawberries, you can potentially knock them all out at once!

Stone sends a wide, circular shockwave across the stage. Players who anticipate it can simply jump over the attack, but if you're right on top of them when you attack their timing will need to be perfect – otherwise, they'll be sent flying.

If you're playing on a stage that has multiple levels of elevation, like the one picture above, the shockwave from Stone will only affect the level from which it originates. Clever players can avoid the attack by being over or under it! 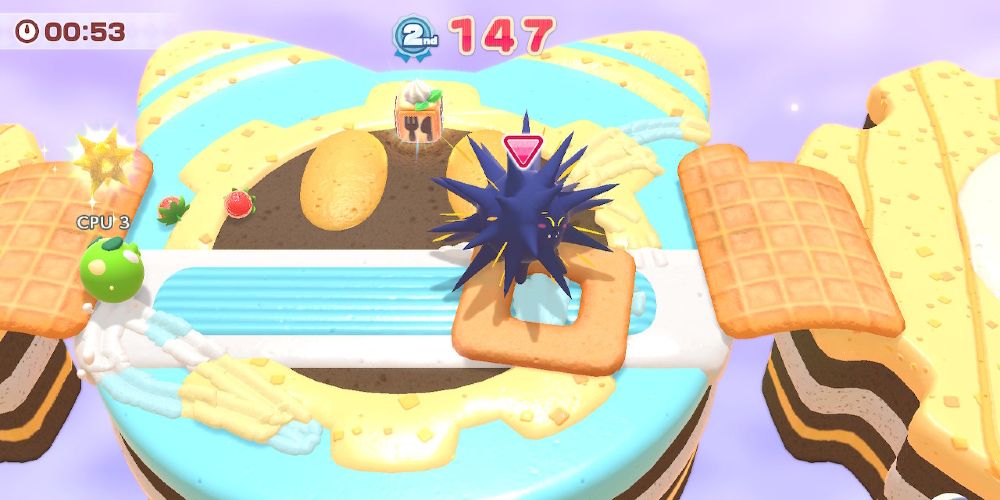 If your current Battle Royale includes Needle, stay as far away from your opponents as possible. It causes any opponents close to Kirby to get knocked off the board, and when it appears it does so frequently!

Needle is dangerous as a close-range threat, but you usually need to chase your opponents down to be able to use it. It does, however, have a secondary power that you can use to catch unsuspecting foes! After using Needle, press and hold the Copy Ability Button. Kirby will start spinning, readying a spiny charge in whatever direction you're pressing the analog stick when you release the button! 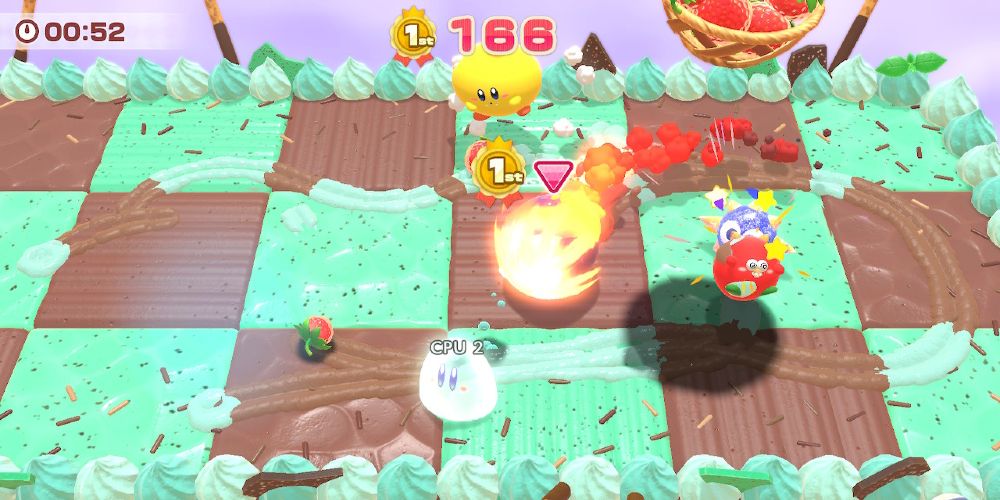 By munching on a fiery pepper, Kirby can bring the heat on the racetrack and the Battle Royale arena. Burning give you extra speed and blasts opponents into the stratosphere, making it a very versatile Food Copy Ability.

Many players don't know this unless they've been paying attention to the Tasty Tidbits at the bottom of the screen on the Home Table; if you press the Copy Ability button while Kirby is in fireball form, he'll get an extra burst of speed! Try to time your button press just before the fireball ends to get the most out of your spicy treat. 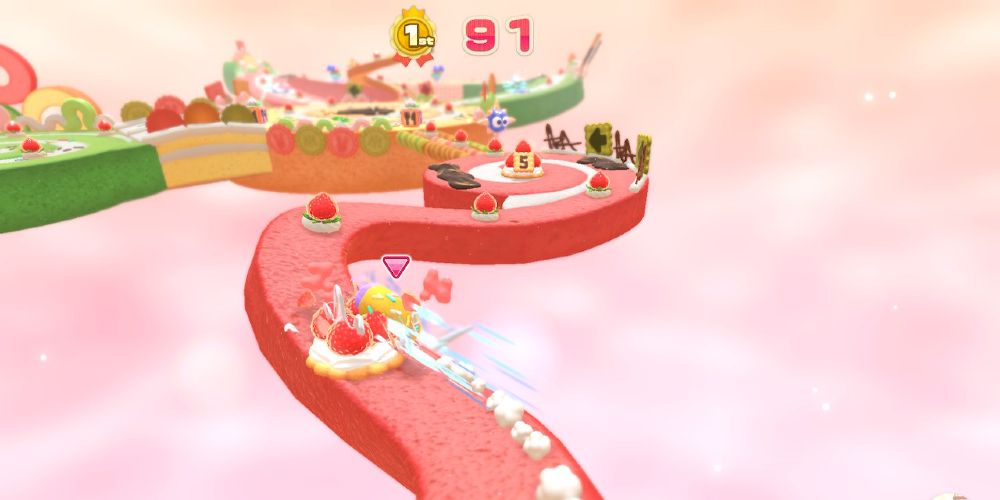 Wheel is one of the few Food Copy Abilities that's more useful during a race than a Battle Royale. This Kirby classic lets you zoom at incredible speeds, plowing through any enemies or opponents unlucky enough to be in your way! You can hit the brakes by pressing and holding the Copy Ability button again, trading speed for the ability to change directions on a dime.

Wheel is a good all-around attack, but its sleeper ability is that it's very hard to fall off the stage while using this Copy Ability. Use Wheel to blast across tricky balance beams, collecting strawberries and taking shortcuts with ease. 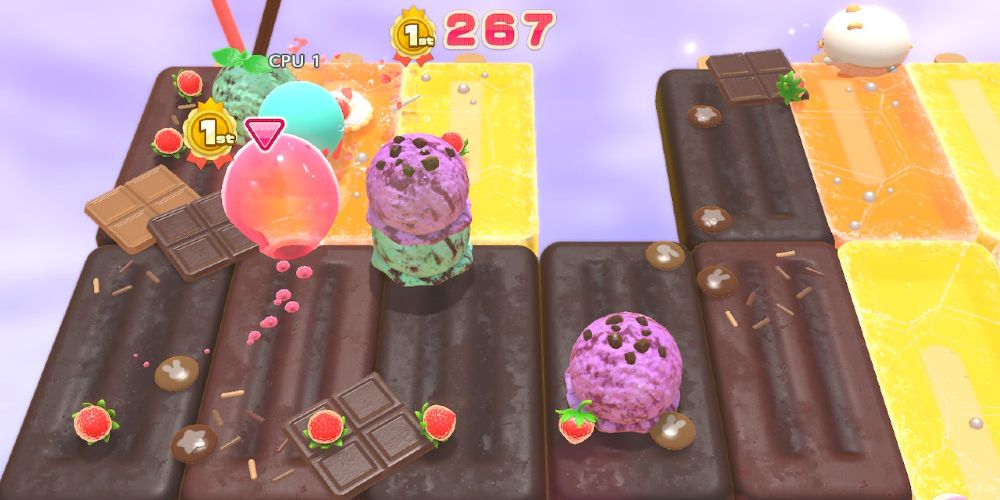 A player who knows how to use Jelly will always be a contender for first place. While in Jelly form, Kirby is immune to attacks but can still pick up strawberries and item boxes! Use it just as an opponent tries to take you out, and they've pass right through you instead!

On the racetrack, Jelly is one of the best Food Copy Abilities you can get. It allows Kirby to pass through Cookie Walls, leaving the rest of the pack far behind while they struggle to break the barrier. Jelly also causes Kirby to move at a set speed regardless of incline or terrain. Use it to easily glide through sticky chocolate syrup or slippery ice cream bars; with a bite of Jelly, nothing can get in your way! 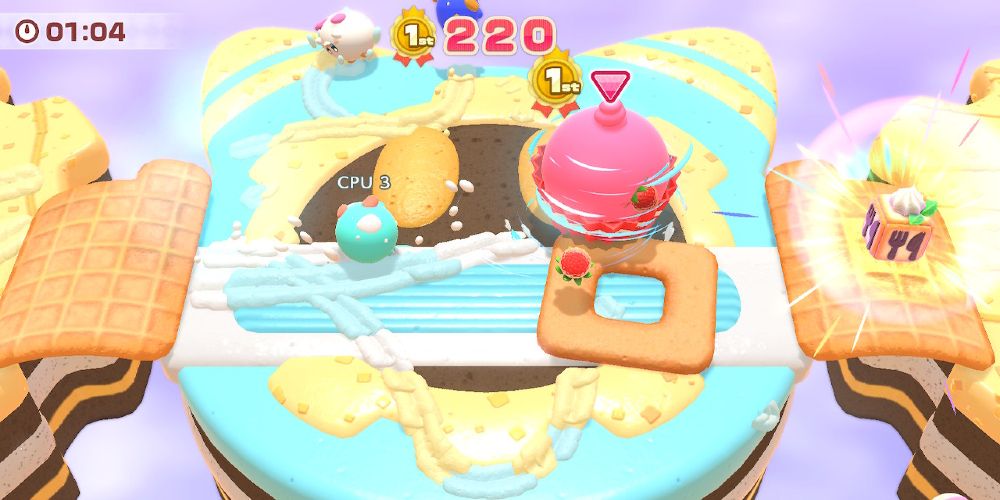 More than any other Food Copy Ability, Tornado has the potential to move the user into first place – especially at the end of a hard-fought Battle Royale! Similar to Needle, Tornado can knock out opponents that get too close, but the real benefit of this Copy Ability is that it draws in nearby strawberries. Use it as the timer wears down, when strawberries fall from the sky like rain, to get a last-second boost to your score.

Pressing the Copy Ability button again while Tornado is in use will extend the power's range, drawing in more strawberries. This causes the ability to end more quickly, so timing is critical if you decide to use the secondary ability. 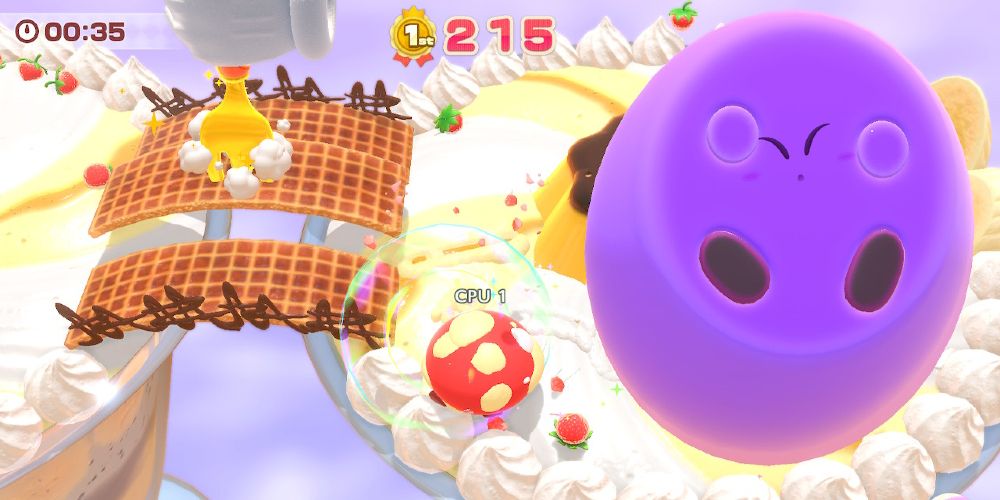 Kirby purists might say that Invincible Candy is a power-up, not a Copy Ability, but in Dream Buffet it's all about the snacks and there's none better than the lollipop. True to its origins, Invincible Candy causes Kirby to instantly KO anyone he touches, while rendering him immune to damage at the same time.

Invincible Candy is incredibly rare, so don't expect to see it very often. It also never appears for the player in first place, since they don't need the help. If you're behind in score and get Dream Land's most coveted confection, use it to even the odds!