There are exactly two kinds of dodgeball. When I was a kid, my P.E. teacher Mr. Swanson would set up a row of cones that divided the gym in half, then split the class into two teams. He’d then dump out a Rubbermaid container full of multicolored squishy balls and command us to throw them at each other. Our baby arms would sail the foam-filled “dodge balls” back and forth across the centerline until everyone either got hit, or more commonly, caught the balls, thus knocking out the thrower. It’s a painfully boring game that I think we only played so that Mr. Swanson could take a nap in his office.

Knockout City is the other kind of dodgeball. The kind we played after school in the cul de sac with a red rubber kickball that left welts on our arms and probably broke a finger or two. The kind of dodgeball that Billy Madison plays with his kindergarten class. I’m convinced that Velan Studios started with that echoey ping sound of a dodgeball smashing a kid in the dome and then built an entire game around it. Knockout City is a bit more complex than good old-fashioned street dodgeball, but it has the same kind of high-impact, kinetic energy.

That said, it isn’t much more complicated than street dodgeball. There are a handful of different game modes that all boil down to “hit other people with a ball to win.” There are no classes or characters, thankfully. Every player has access to the same abilities. For variety, each game will introduce a random special ball alongside the normal balls that spawn around the map. There are six special balls including a bomb ball, a moon ball that gives your character low gravity, and a jail ball that traps other players inside.

That should give you some idea of the line Knockout City walks between high-skill twitchy gameplay and goofy antics. It isn’t a character shooter — there are no cooldowns to manage or ultimate abilities — but it does offer a pretty robust move set. Players can run, dodge, tackle, charge up shots, and pull out a glider to fly across gaps. It’s essential that the movement feels precise and fluid because the core of the experience, the combat, is surprisingly demanding. 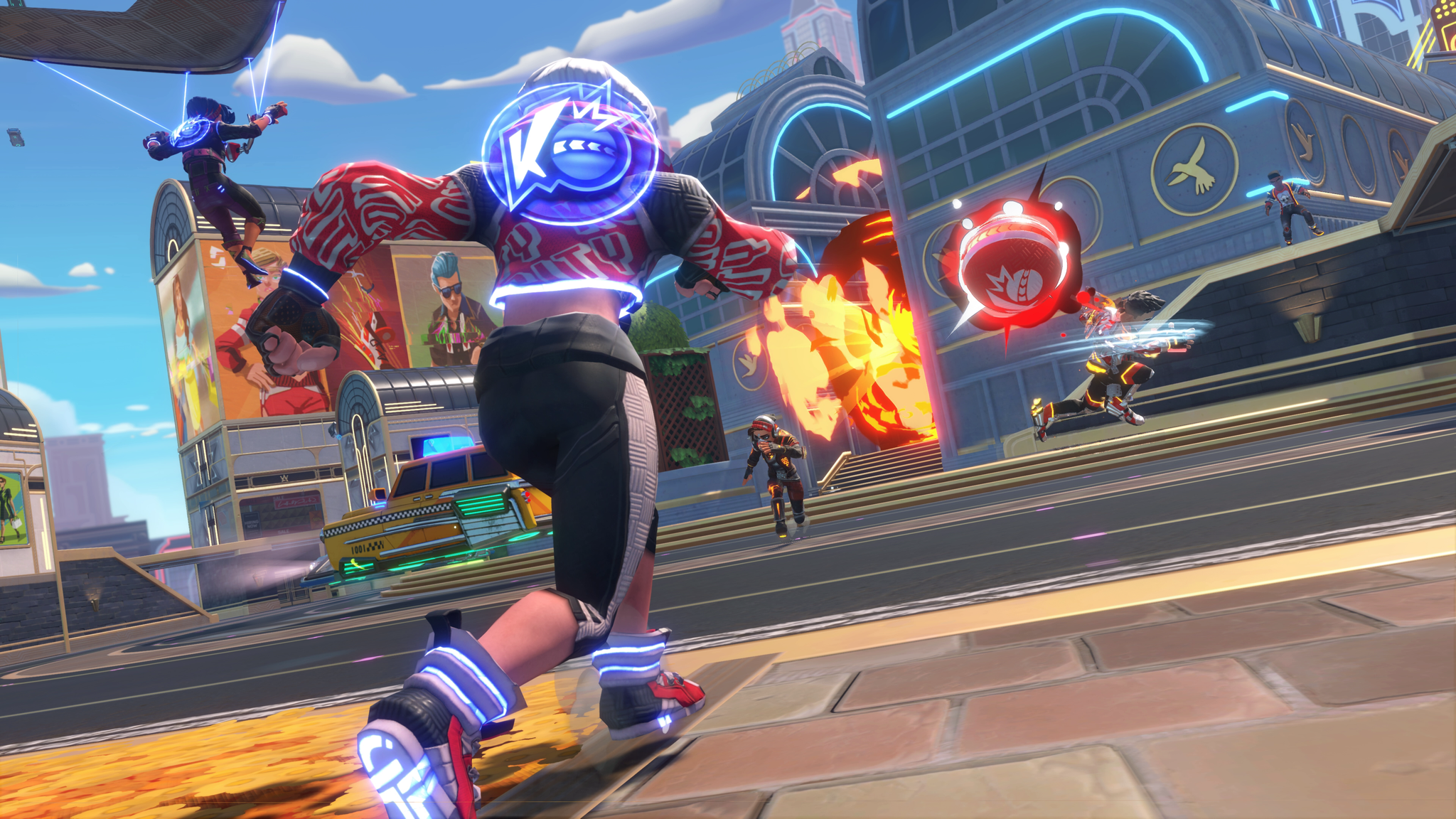 If you aim in the general direction of another player you will lock onto them so long as you maintain line of sight, and then for a few seconds after they dip behind cover. When someone locks onto you, you’ll see a red outline around your screen and a subtle directional indicator of where the enemy is in the world. If you have good timing, you can press a button and catch the ball. If you have exceptional timing, you can catch the ball just before it hits you and throw it back harder. If you and your opponents volley the ball back and forth, it will get faster and faster with each toss.

Knockout City doesn’t reward good aim, it rewards positioning, timing, and most importantly, intimidation. This is a mind game, and the toolset supports psychological warfare. You can charge a ball up to throw it faster, naturally, but you can also fake a throw to trick your opponent into trying to catch too soon. You can spin before you throw to curve the ball around corners or hit people facing the wrong way. Or you can front flip as your throw to lob the ball in a long arc which can hit people behind cover or just psych them out with an unexpected drop shot. Some of these tactics are a great way to sneak hits in during big team fights, but when you lock eyes with an opponent and commit to a showdown, you really need to have a mastery over every trick in the book if you want to survive. Managing your spacing, your timing, and your type of throw as you trade the ball back and forth, each throw getting stronger and faster, is some real edge of your seat stuff. Managing to outsmart people to secure a knockout feels pretty amazing. Getting the drop on someone does give you an advantage, but it really does feel like skill and reflexes are everything in Knockout City.

I know what your next question is, and yes, you can turn yourself into the ball. Teammates (and opponents) can pick you up in ball form and hurl you across the battlefield. It’s a bit of a desperate play, but when the enemy team has complete control over the dodgeball supply, there’s no better feeling than tucking yourself up into a little ball and emoting “Throw Me!” to your teammate for the final knockout you need to win. It’s absurd, of course, but it helps the game strike a really great balance between silly and serious gameplay. 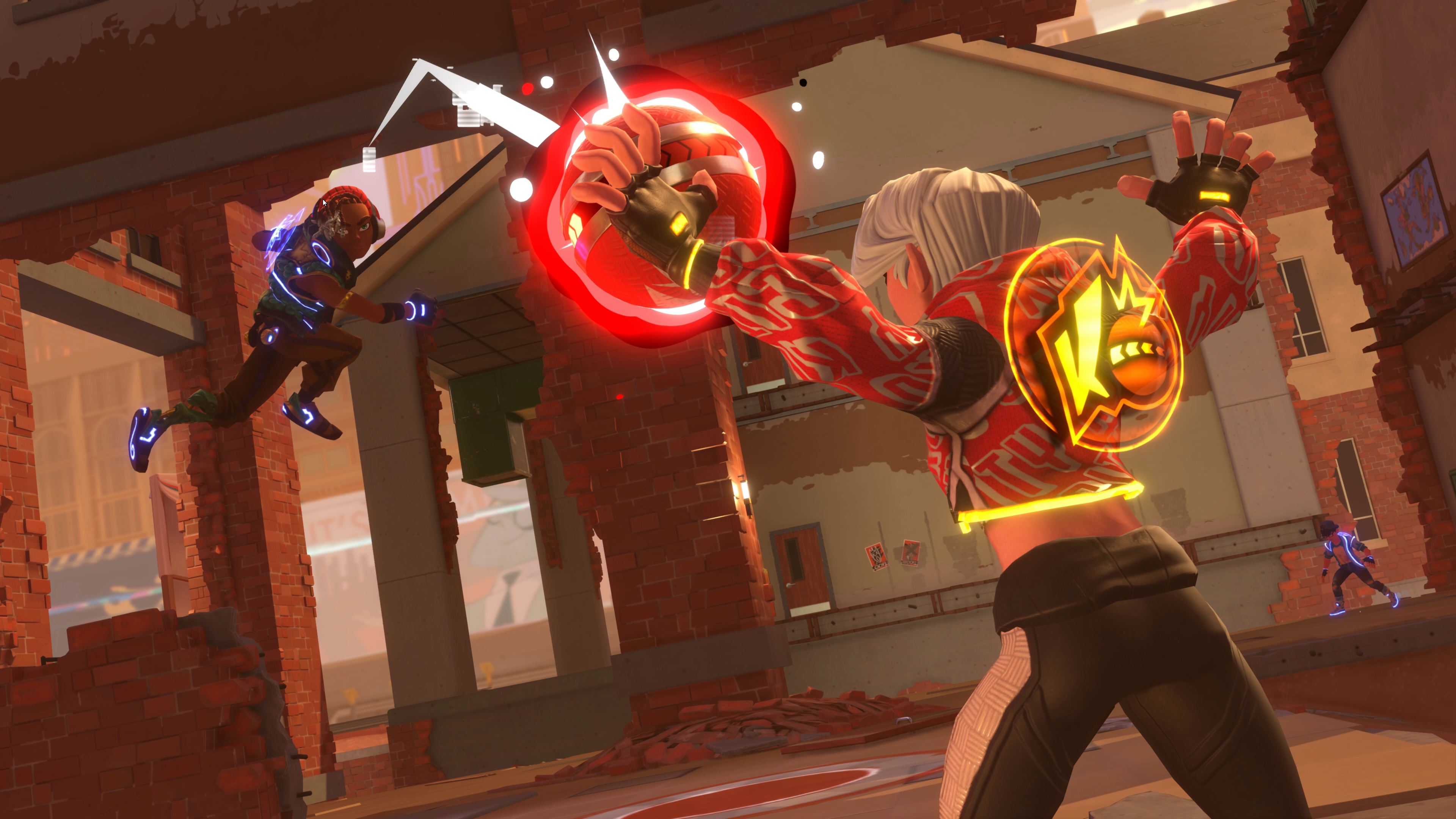 Knockout City is really set up for success. It launches this May on PC, PS4, PS5, Xbox One, Xbox Series X|S, and Switch, all with cross-play and cross-progression. It’s got a battle pass-style progression system, a huge variety of Splatoon-quality cosmetics, and some pretty impressive social features for clan organizing and group play. If the people come, Knockout City is ready for them. It isn’t free-to-play, which concerns me. This is where Rocket Arena went wrong after all. There is a free trial period for new players, but ultimately the game costs $20. I hope people will give it a shot because it really is a lot of fun. I desperately crave casual games with a good amount of depth that reward skill but don’t punish me for not dedicating my life to it. Knockout City is that game, and I’m excited for more.

Next: Somehow, This New PvP Dragon Riding Game Is Even More Fun Than It Looks