Equipment is a card type in Legends of Runeterra, introduced with the Awakening expansion. In simple terms, Equipment cards are weapons you can give to your units, granting them the Equipment’s stats and often some other ability.

Unlike your average buff card, if the unit carrying your Equipment dies, you don’t lose it; instead, it returns to your hand and keeps any buffs you gave it. It can then be given to a new unit. The power level of these Equipments varies wildly, ranging from useful bonuses to game-winning effects. Here are the best Equipments you can give your units in Legends of Runeterra. 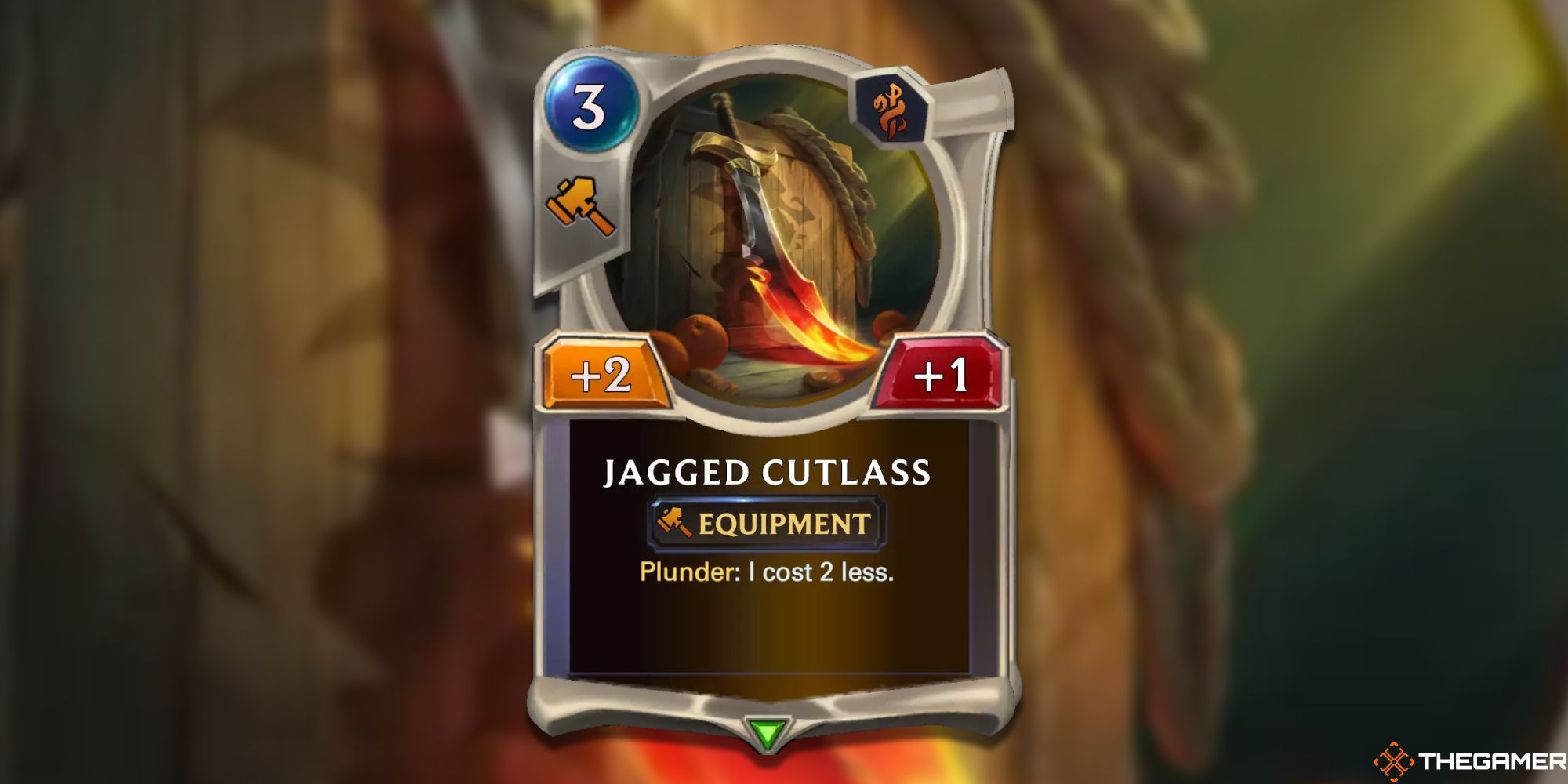 The Jagged Cutlass is intended to see play in extremely aggressive decks, rewarding you for damaging the enemy Nexus by giving you more damage. It’s the classic and powerful combo of damage plus damage equals lethal.

That said, the Cutlass likely isn’t impactful enough unless the deck you are playing is truly set on reducing your opponent’s Nexus to zero as quickly as possible, since the simple stats it provides become far less relevant as the game progresses. But if that is your goal, the Jagged Cutlass is worth considering. 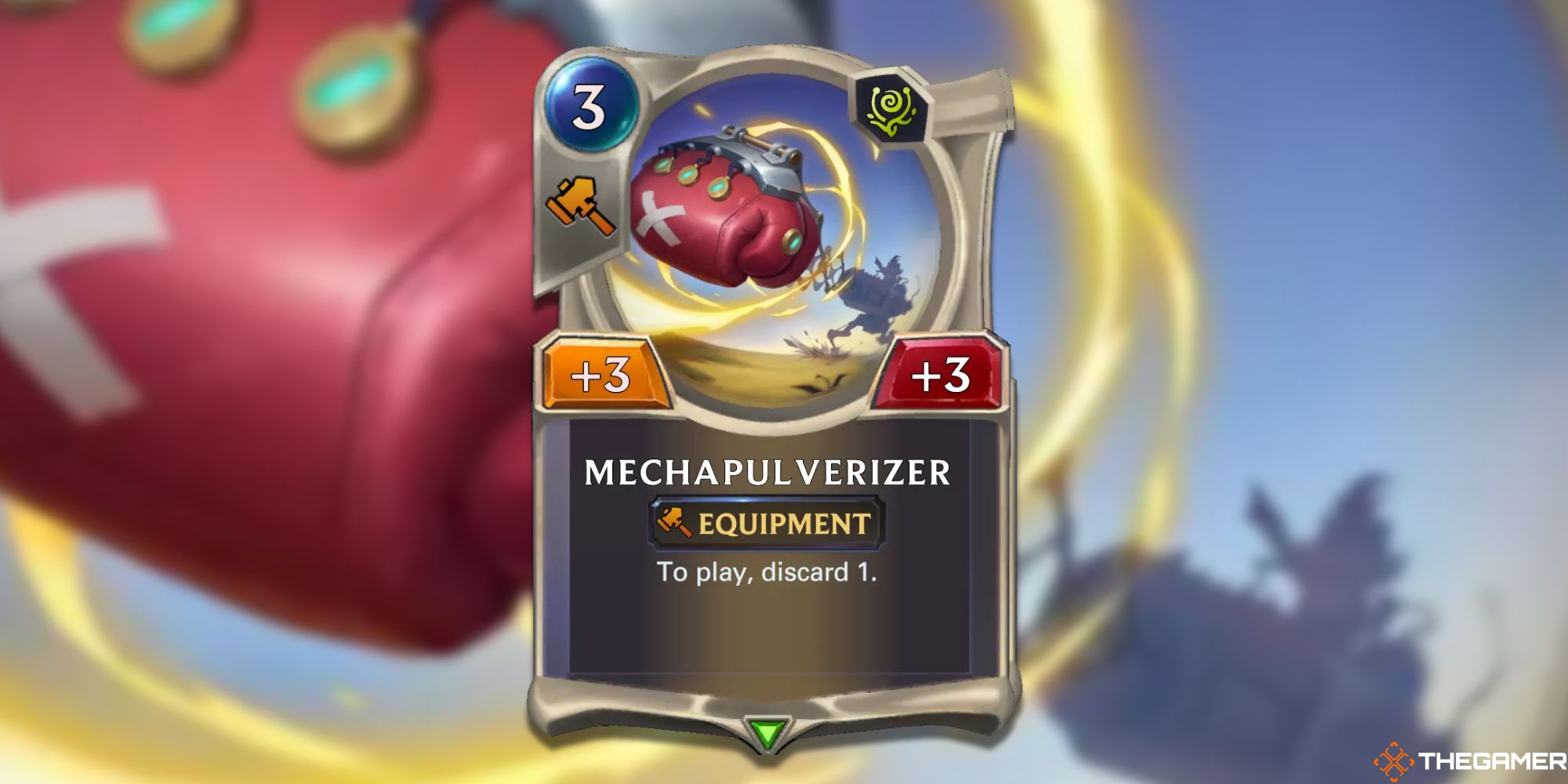 Getting 3/3 in stats for three mana isn’t a great deal, so you’re only going to run the Mechapulverizer in a deck where discarding cards is actually beneficial. Otherwise, the downside likely means the card isn’t worth playing.

Bandle City does have a lot of discard cards, so the idea of such a deck isn’t out of the question, but it doesn’t currently exist in the region. However, if one ever rises to prominence in the meta, the Mechapulverizer should provide some early punch (get it?) for the deck. 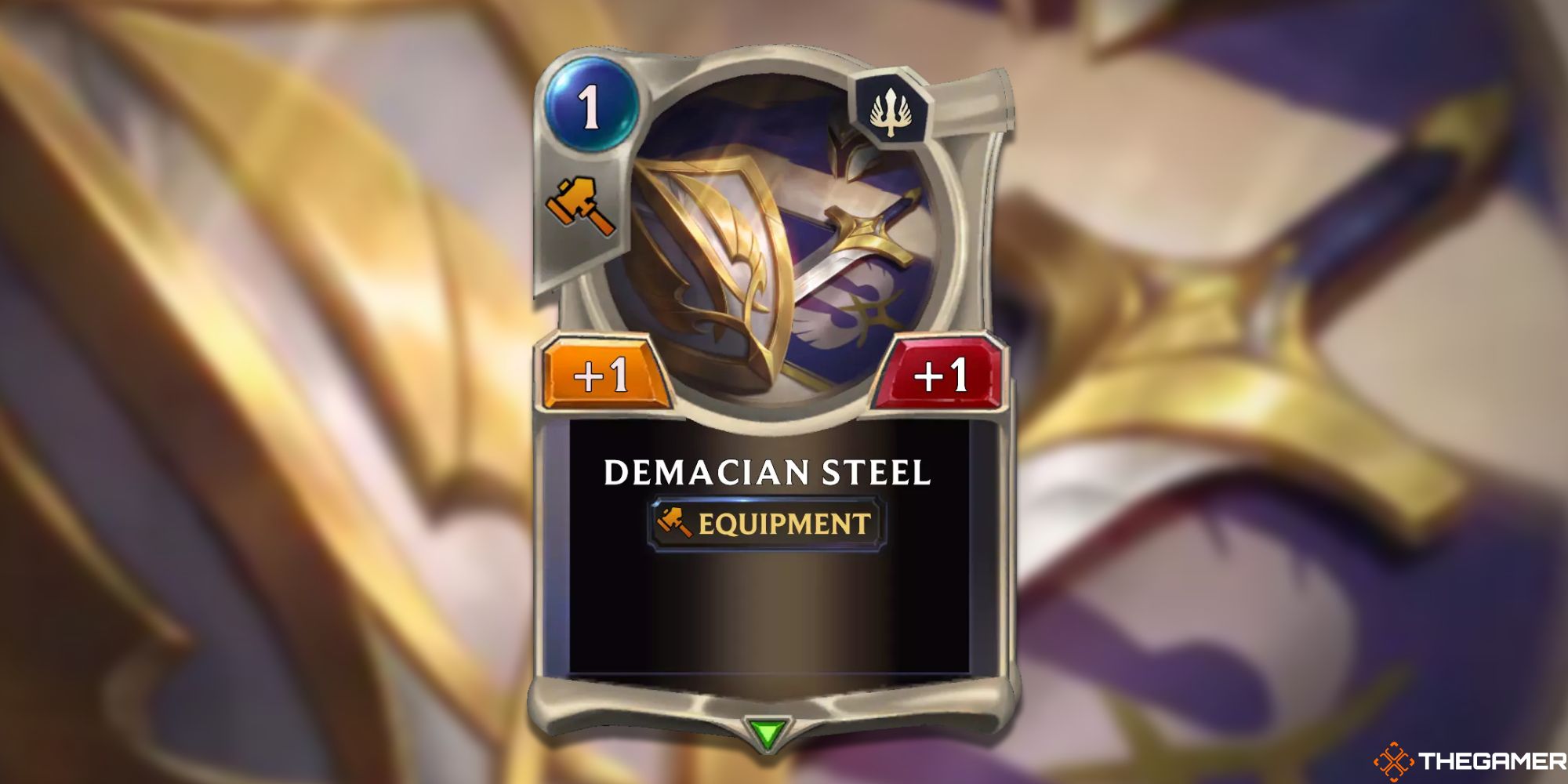 Many of the Equipment cards introduced so far in Legends of Runeterra are fairly simple, likely to help introduce players to the new card type, but Demacian Steel goes above and beyond in that regard. In fact, it might be the simplest card in the game.

But simplicity doesn’t necessarily mean weakness. Demacia, as a region, heavily focused on combat between units, so even a 1/1 boost can make a significant difference. And if you buff the Demacian Steel, it can provide continuous value, ensuring that your trades are always favorable. 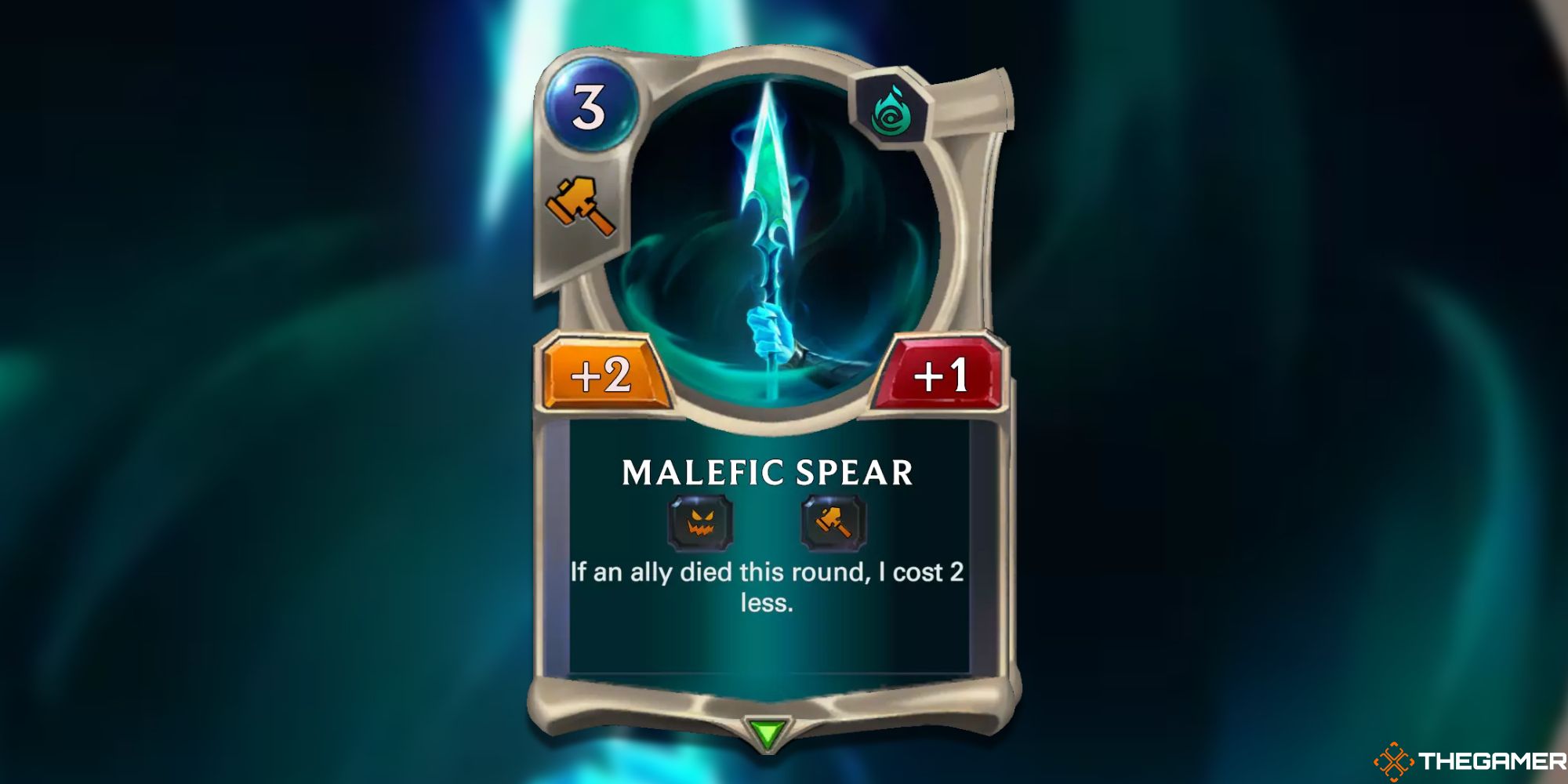 The Malefic Spear is essentially a better version of the Jagged Cutlass. The mana cost and discount are exactly the same, and you get Fearsome as a bonus, a powerful keyword for any deck. Sure, in theory one of your allies dying feels like a harder condition to meet than damaging the enemy Nexus, but allies die all time, especially in Shadow Isles, where killing your own units is a commonplace occurrence

Playing the Spear for one mana might actually be easier than doing so for the Cutlass in many cases. That being said, there isn’t currently great aggressive deck for Shadow Isles, so the Spear hasn’t seen significant play. But any future Shadow Isles decks that are trying to blitz their opponents should consider including it. 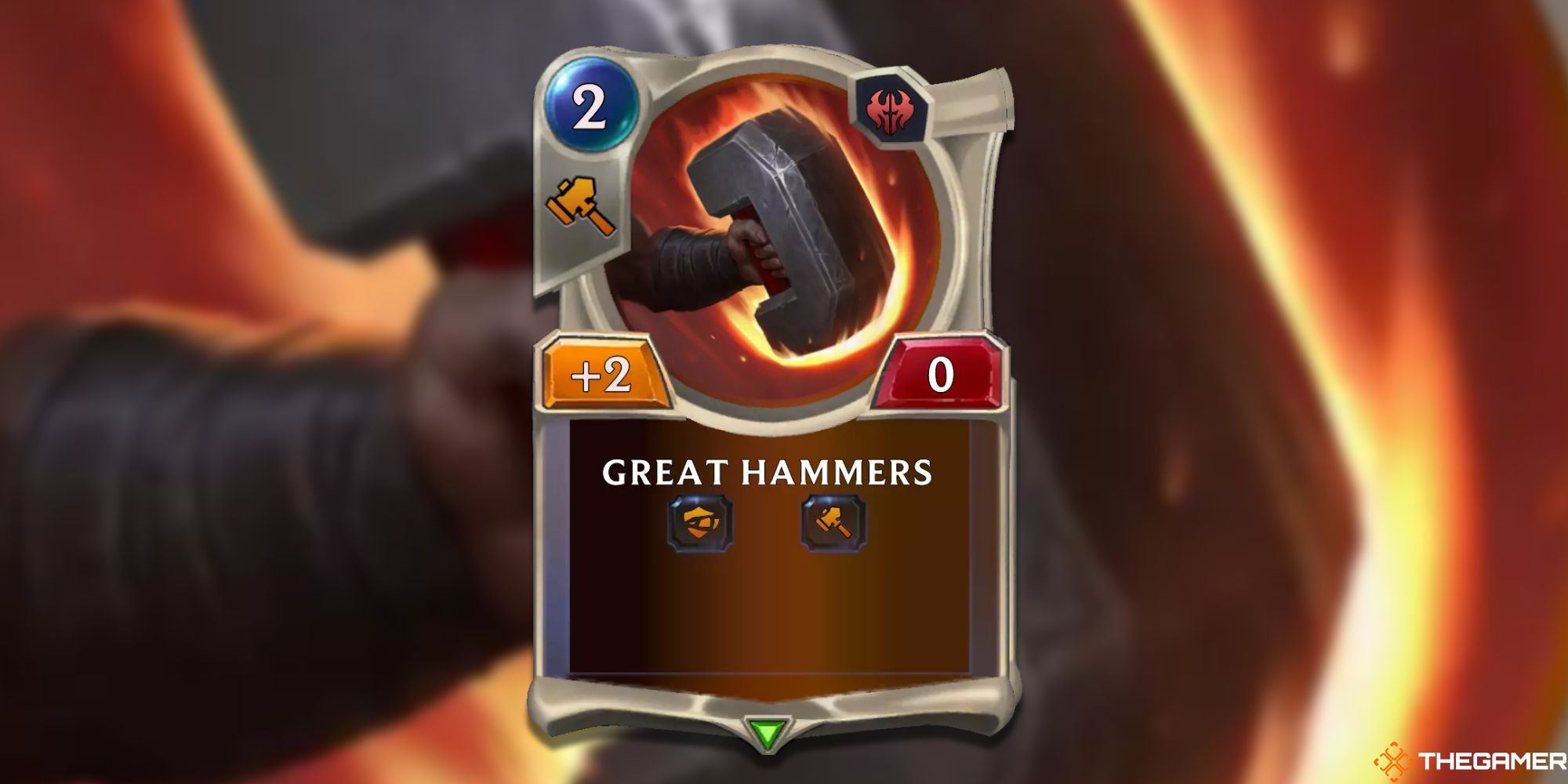 Overwhelm is one of the better Keywords in Legends of Runeterra. When you are playing an aggressive deck, your opponent will try to thwart your efforts by blocking your units. Overwhelm allows you to push through them, and the Great Hammers are a cheap way to get it on your units.

Plus, the Hammers give you a nice little Power bonus to make the Overwhelm attack even more effective. The card isn’t going to fit into every aggressive deck, but it can be a solid tool if you need some extra firepower to finish off your opponents. 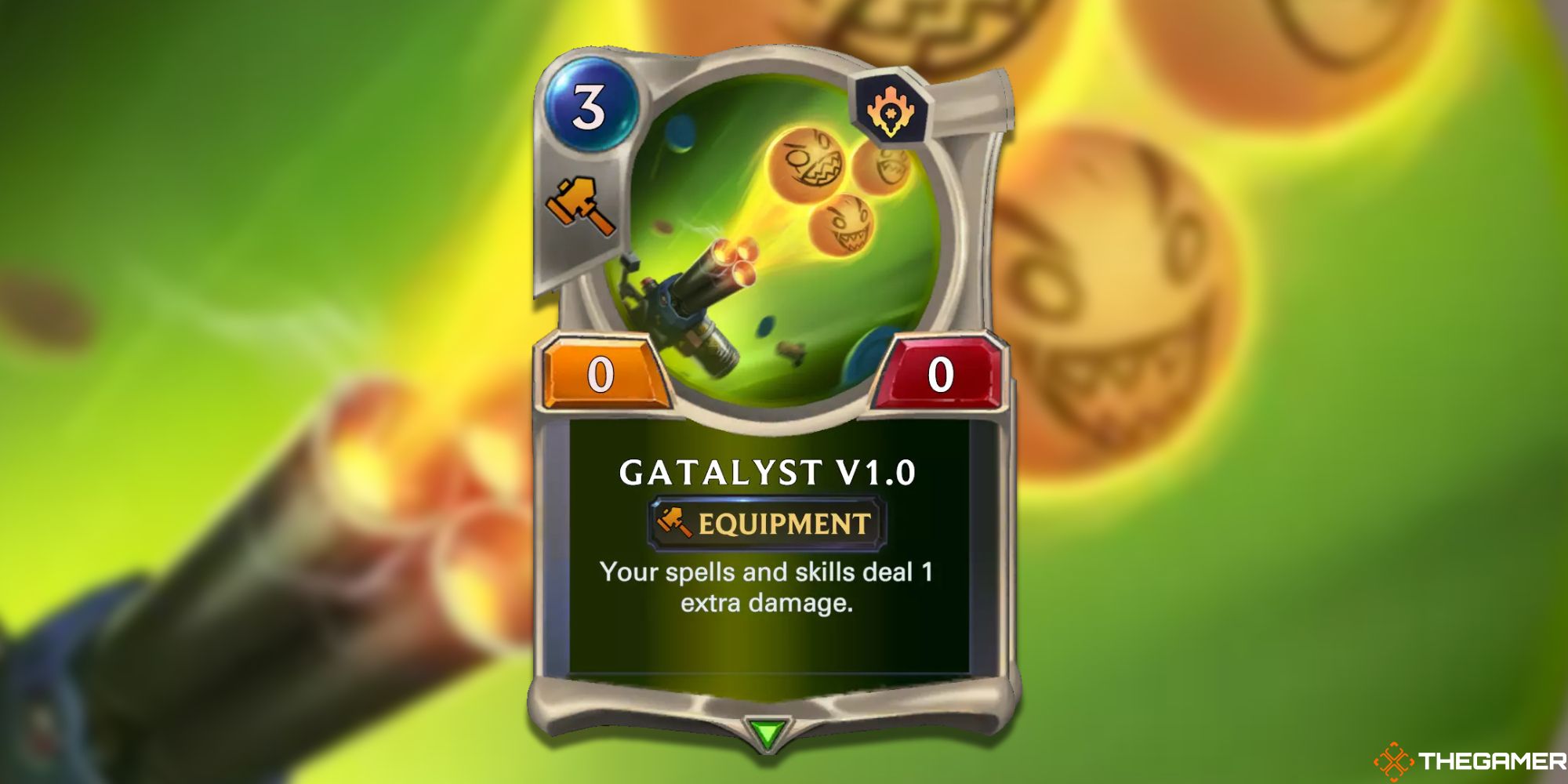 As the power of Ravenbloom Conservatory has shown us, increasing the damage of your spells and skills by even a single point is a dangerous effect. The Gatalyst does exactly that, and unlike the Conservatory, you don’t need to go through any hoops to get it. The downside of having the effect on a weapon is that you lose the effect if your unit dies, at least until you play it again.

There isn’t currently a deck in the meta that makes great use of it, but with an effect that powerful, it seems like it’s only a matter of time before the Gatalyst finds a home.

4 Treasure of the Sands 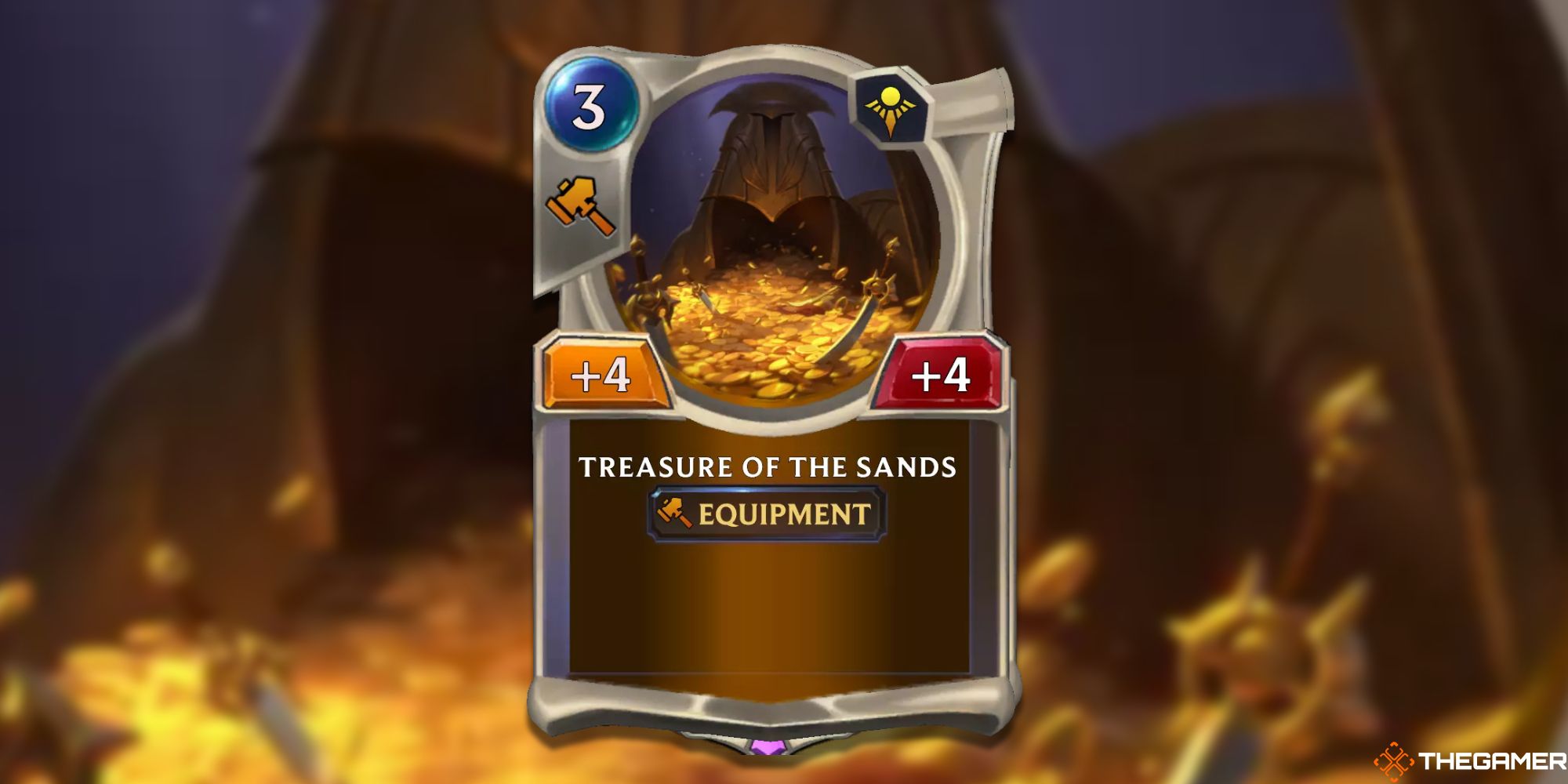 It’s only stats, but 4/4 in stats on three mana shouldn’t be underestimated. It gives you a serious early-game tempo advantage, since most units at that stage in the game won’t be able to compete with such a large unit. 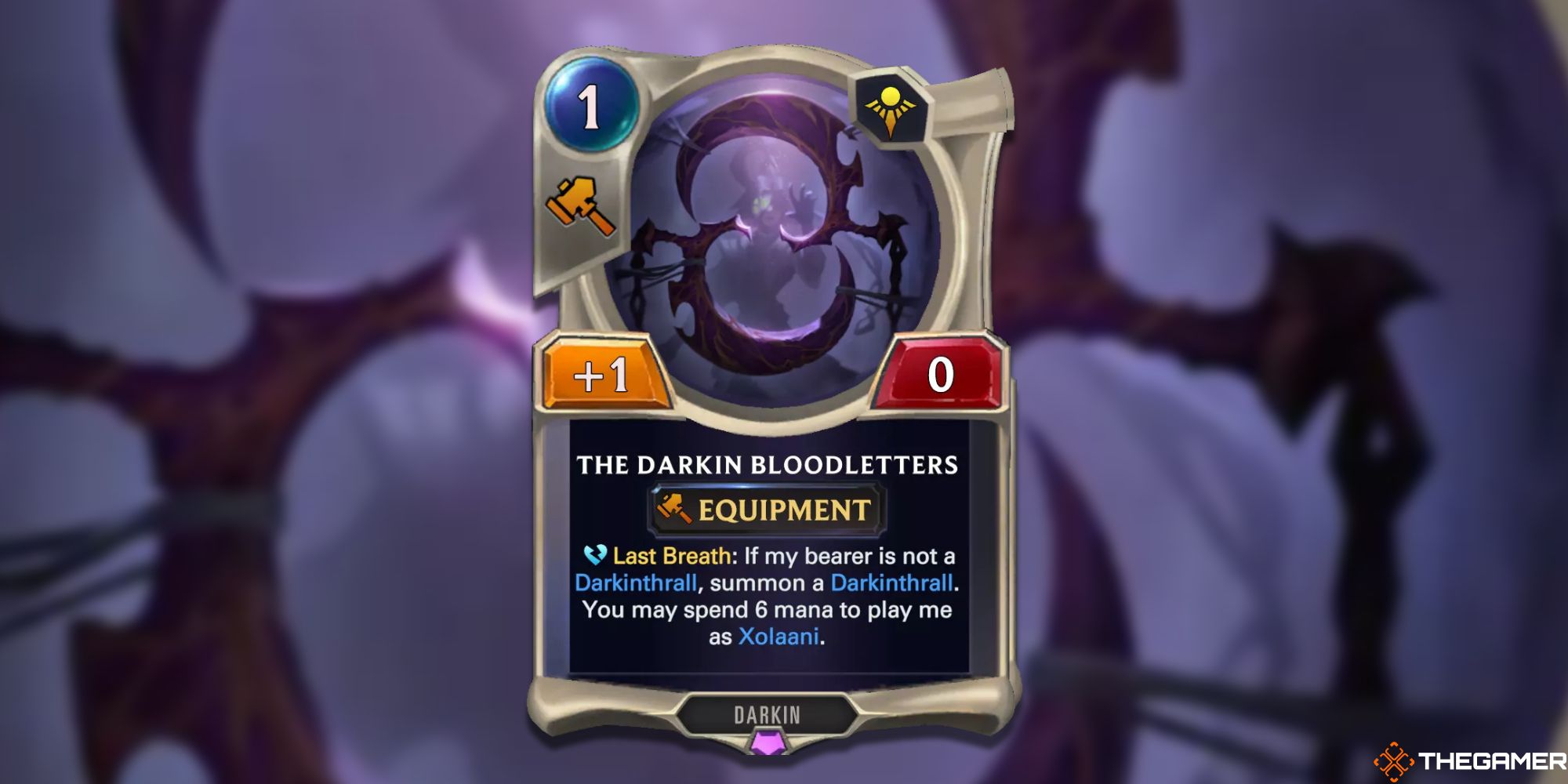 Its unique ability allows you to summon a nearly infinite swarm of Darkinthralls. These units are only 1/1 in stats, but they gain plus 2/2 if you choose to play an Equipment on them, although re-equipping it with the Bloodletters means you won’t get another Darkinthrall if it dies. Additionally, for six mana and the added cost of sacrificing one of your units, you can instead summon Xolaani which, as a 7/7 with Overwhelm, represents a threat your opponent needs to deal with immediately. 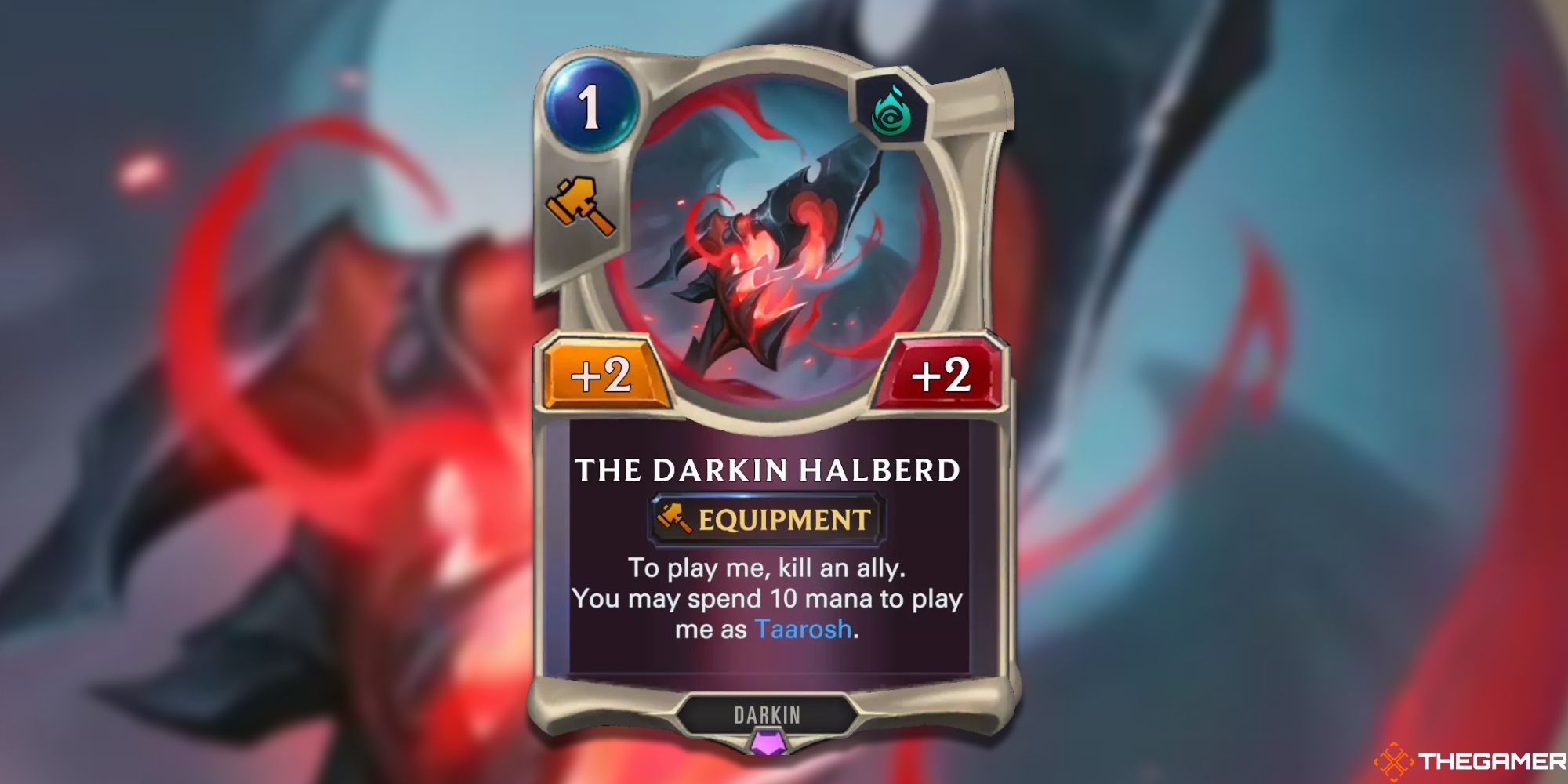 Getting 2/2 in stats is a decent boost for one mana, but in most decks, the drawback of playing Darkin Halberd will make it not worth including. However, there are some scenarios in which killing your own units is not a particularly large downside, but is in fact actively beneficial.

Champions like Nasus and Kindred level up and gain power from the deaths of all units, including their own allies. And certain units actually benefit from dying, most notably the Undying, which returns stronger after being killed. The Darkin Halberd is an easy fit into this sort of deck, turning a supposed weakness into an outright bonus. 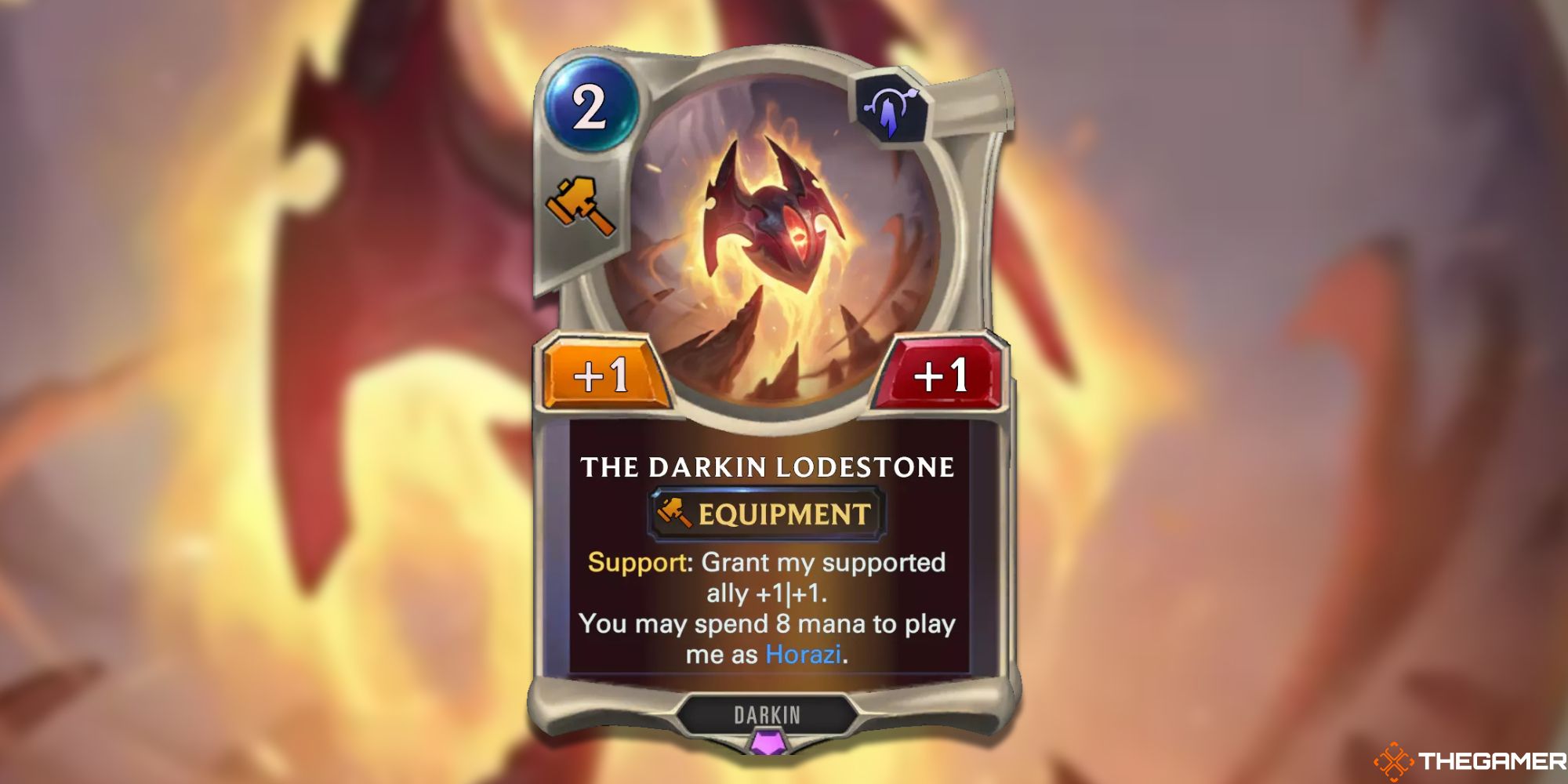 The Darkin Lodestone gives 1/1 in stats to the unit it’s equipped to and to any unit it supports. That’s a nice bonus, especially if you combine it with Elusive units. Still, that alone wouldn’t make it the best Equipment card in Legends of Runeterra.

However, you can play the Loadstone as a unit instead. And it’s not just any unit. Horazi costs eight mana, a high price that's extremely warranted. Aside from being a 7/7 with Spellshield, she also increases her supported ally until its stats match her own, and grants them her Keywords. If allowed to attack, Horazi can easily combine for well over 12/12 in stats combined. Often, those extra stats will be on an Elusive unit, swinging at your helpless opponent’s Nexus and getting you the win.