Each chapter of Live A Live tells a different story set at a different point in history. At first glance, these stories might not seem to have much to do with one another. As players proceed through the game, though, they might start to see some recurring details that suggest there is something more to this millennia-spanning tale.

If you've finished the game and still aren't sure what you just witnessed, or if you just want to know ahead of time how the chapters are connected, read on to learn all about the forces at work behind the scenes.

This article contains major spoilers for Live A Live. 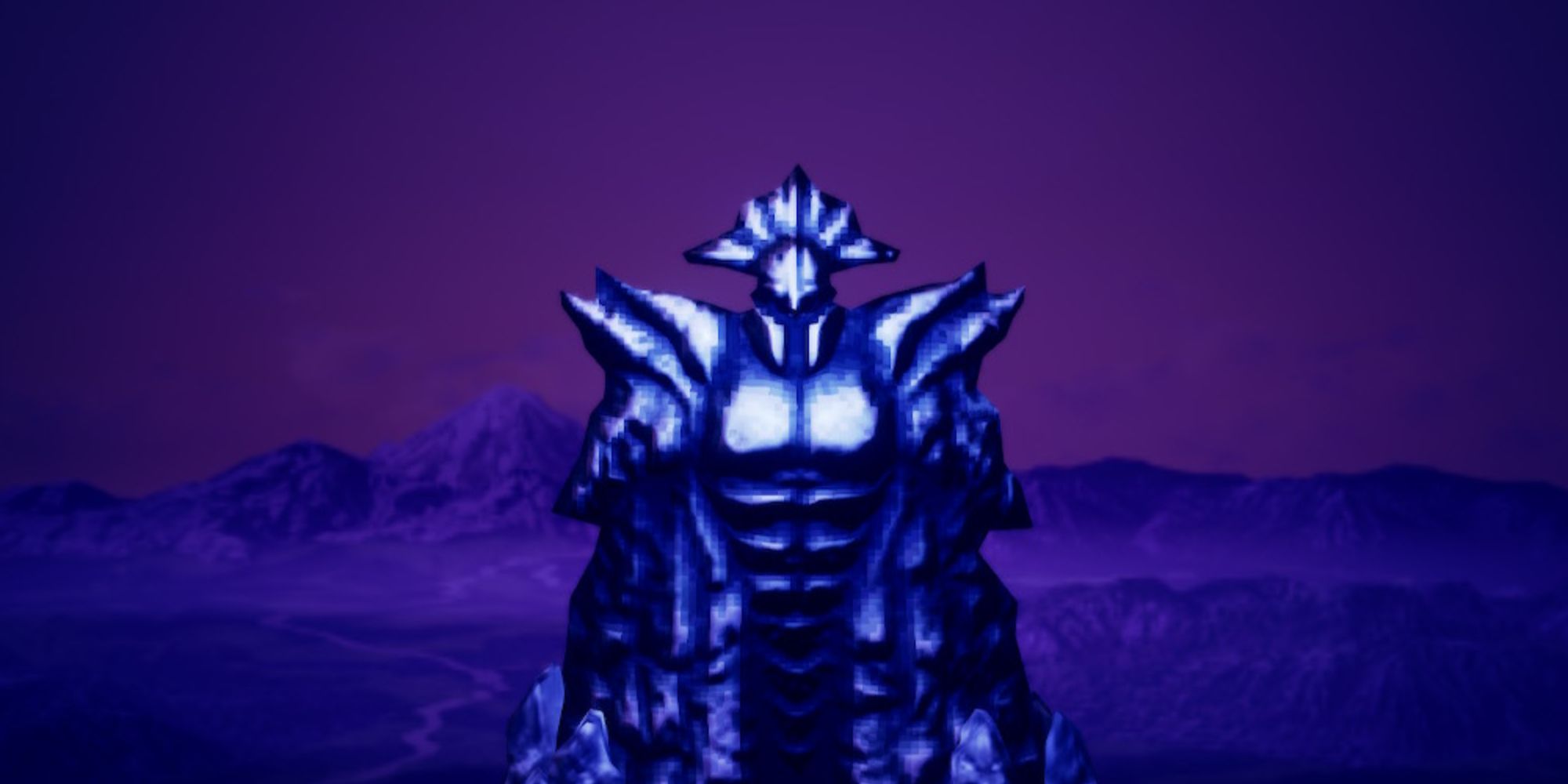 Each of Live A Live's protagonists ends their chapter with a battle against one of the many incarnations of Odio, the Lord Of Dark. An entity of pure hatred that transcends time and space, Odio is nevertheless unable to affect the world in most cases. However, every sentient creature – from animals to humans to intelligent robots – carries a fragment of Odio inside of them.

Given the proper conditions – typically overwhelming feelings of anger, betrayal, or hate – the seed of Odio inside a being can grow, allowing the Lord Of Dark to manifest within its host. Mercifully, this doesn't happen very often – there are only nine known instances of Odio manifesting throughout all of human history.

When Odio takes hold of a host, it drives them to acts of selfishness and violence, granting them formidable strength as well. The known hosts of Odio are: 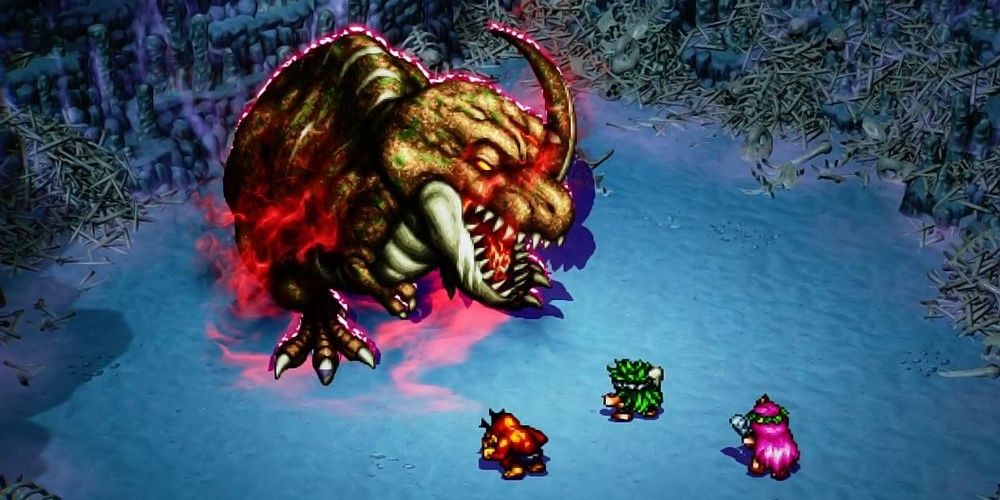 Believed to be the last living dinosaur, Odo was a Tyrannosaurus Rex that developed a taste for human flesh. Worshipped as a vengeful deity by the Kuu Tribe during the early Neolithic Period, Odo was given human sacrifices until finally being slain by Pogo and his companions.

The dinosaur's territory, previously too dangerous to explore, proved to have fertile ground that allowed the local tribes to settle and merge, abandoning their hunting and gathering lifestyle. 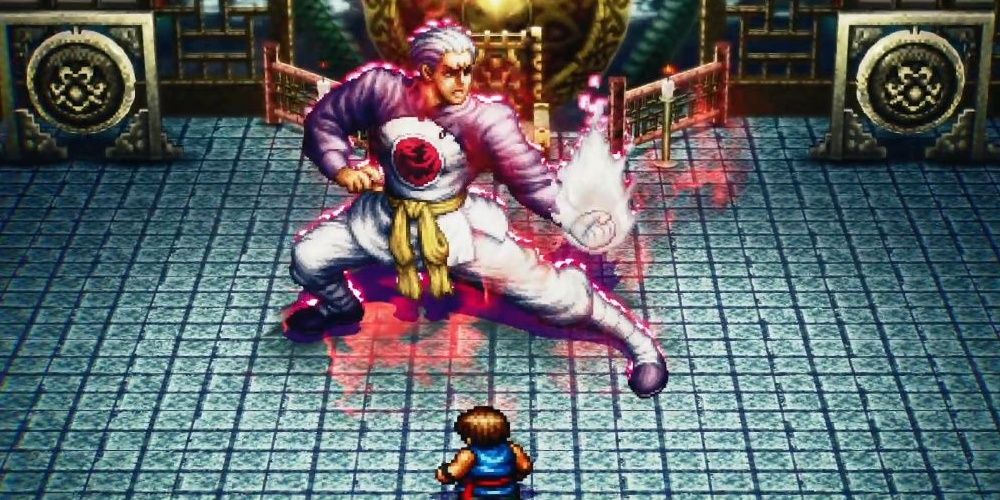 A renowned martial artist during the Qin Dynasty, Ou Di Wan Lee founded the Indomitable Fist sect. Dedicated to gaining power over others through strength and intimidation, the Indomitable Fist terrorized local towns from their fortress. Ou Di Wan Lee's arrogance was only matched by his drive to become stronger, and he even kept assassins nearby that he didn't completely trust just to force himself to remain vigilant.

Ou Di Wan Lee's pride turned out to be his downfall, and he was slain by the last remaining Earthen Heart Disciple after sending his acolytes to destroy the Shifu's home. 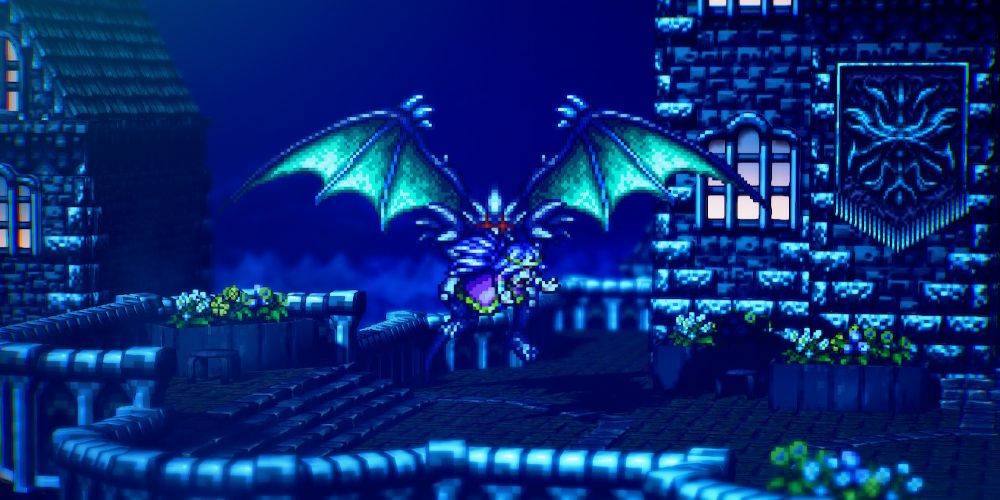 In the small European kingdom of Lucrece, an unnamed wizard known only as the Archon claimed Odio's power, becoming arguably the most successful of the entity's incarnations. This wizard's moniker – the Lord Of Dark – came to be associated with Odio himself, and he became the single greatest threat to peace and harmony in Lucrece.

The Lord Of Dark was eventually defeated by the hero Hasshe and his companion, the priest Uranus. The Archon's Roost remained intact but was shunned as a cursed land by the people of Lucrece. Hasshe would eventually become disillusioned with his role as the kingdom's savior and adopted a life of solitude in the nearby mountains. 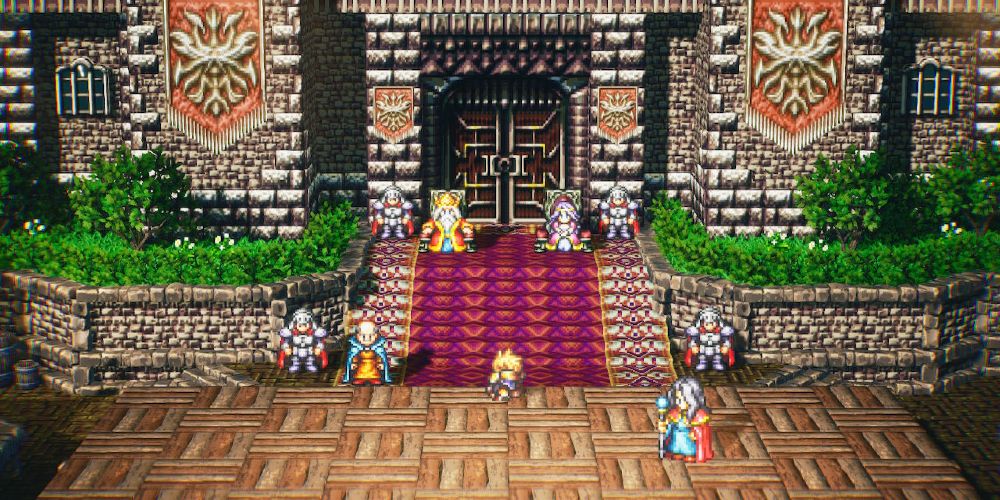 A few decades after the defeat of the Archon, a tournament was held in Lucrece's capital. The prize was the hand of the Princess Alethea, which was won by a promising knight called Oersted. As it turned out, Alethea was in love with Oersted's companion, the wizard Streibough, whom he had defeated in the final round of the tournament.

Alethea and Streibough concocted a plan to see the Princess "abducted," creating a ruse to make the kingdom believe the Archon had returned. Oersted led a failed quest to rescue Alethea, which ultimately resulted in the death of the hero Hasshe. Using illusion magic, Streibough tricked Oersted into killing his father-in-law, the King, resulting in the knight's exile from Lucrece.

Oersted returned to the Archon's Roost, where he discovered his friend's deception. Oersted and Streibough fought a duel, resulting in the wizard's death, and Alethea stabbed herself in grief. Oersted proceeded to renounce his vows as a knight, claiming Odio's power willingly, and became the Lord Of Dark's most powerful incarnation ever to walk the earth. 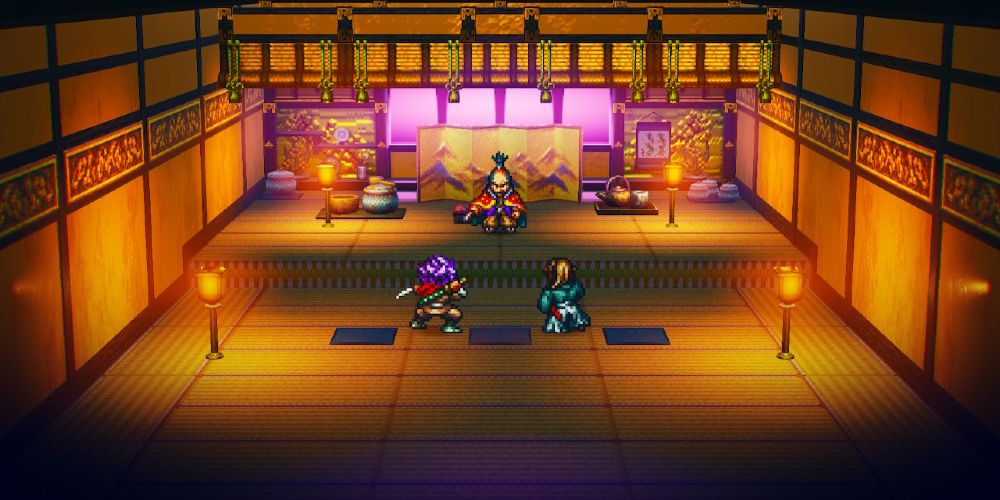 Ode Iou was a feudal lord who lived at the end of the Tokugawa Shogunate. While he was firmly on the side of the Shogun in the power struggle of the time, this was more out of a desire for personal power than loyalty to his overlord. Lord Ode employed shinobi and practitioners of dark magic without hesitation and cultivated Odio's power within himself with the aim of supplanting the Shogun as ruler of Japan.

Ode Iou was even able to capture the reformer Sakamoto Ryoma, and would have used his powers to turn the famous samurai to his side if not for the intervention of the Enma clan of ninjas. A young shinobi named Oboromaru freed Sakamoto from Ode's dungeon, and the two cornered and slew Iou in a rooftop battle just as he transformed into a monster with Odio's power. 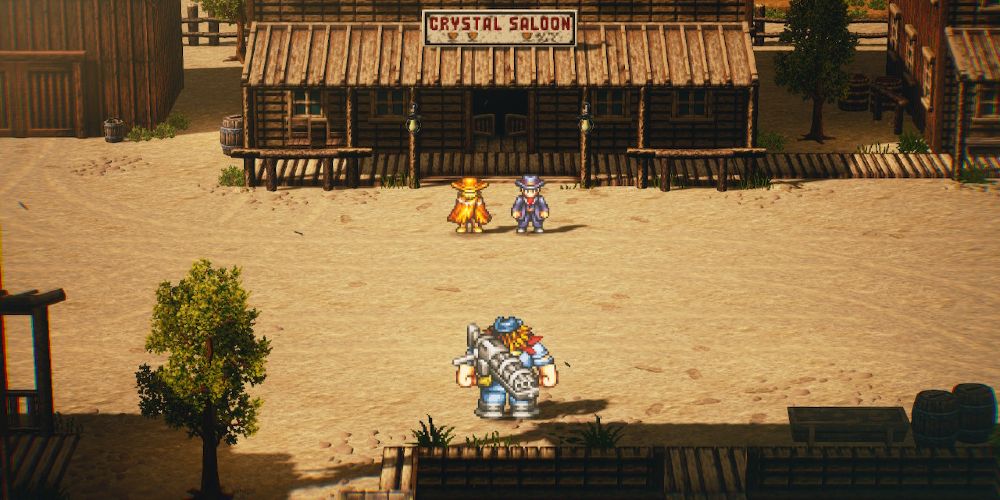 At the battle of Little Bighorn in 1876, the 7th Cavalry Division of the United States Army was soundly defeated by the Lakota, Dakota, Northern Cheyenne, and Arapaho tribes of the Great Plains. A surviving cavalryman going by the name of O. Dio would go on to leave the Army and lead a group of bandits on the frontier called the Crazy Bunch.

Much like the Indomitable Fists centuries before, the Crazy Bunch intimidated local civilians into giving them whatever they wanted. One of their targets was a poor town called Success, which they exploited for months. Eventually, the famous bounty hunter Mad Dog and his rival the Sundown Kid killed two members of the Crazy Bunch in a shootout. When O. Dio and his gang rode to avenge this slight, the townsfolk rose up against them, and Dio was shot dead by the Sundown Kid.

After his defeat, O. Dio turned into a horse and galloped away, revealing that the Lord Of Dark had not manifested in a human at all but instead took root in an animal and transformed it to suit his needs. 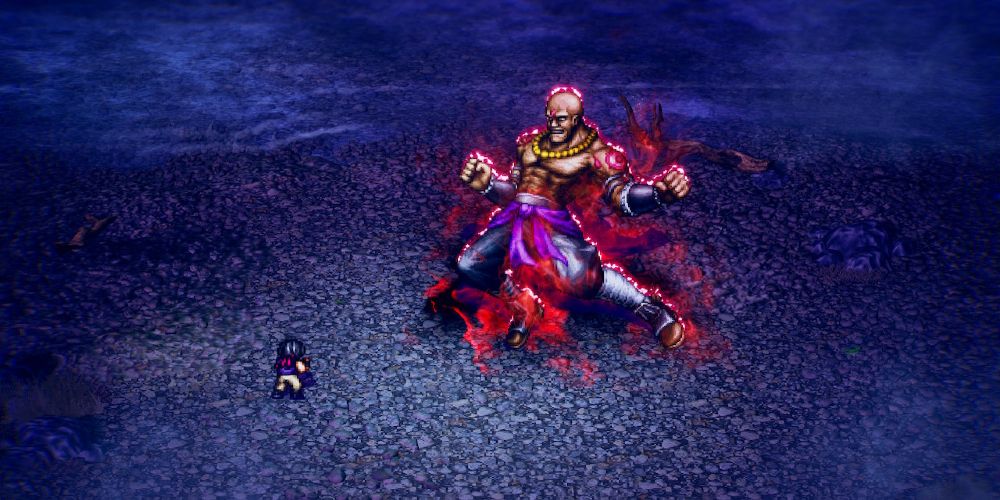 Odie O'Bright was a martial artist whose pride demanded that he be acknowledged as the greatest fighter in the world. His violent and uncompromising nature caused Odio to manifest within him, and he sought out the masters of different fighting styles to learn their techniques.

Around the same time, another fighter by the name of Masaru Takahara was also challenging the world's top fighters. When Takahara and O'Bright finally met, O'Bright revealed that he had killed each of the champions after defeating them, believing that to do otherwise would make him too soft to be considered a great fighter. Takahara rightly saw O'Bright as nothing but a murderer and defeated him in the ensuing battle. Masaru was forced to kill Odie O'Bright, who would not stop until one of the combatants was dead. 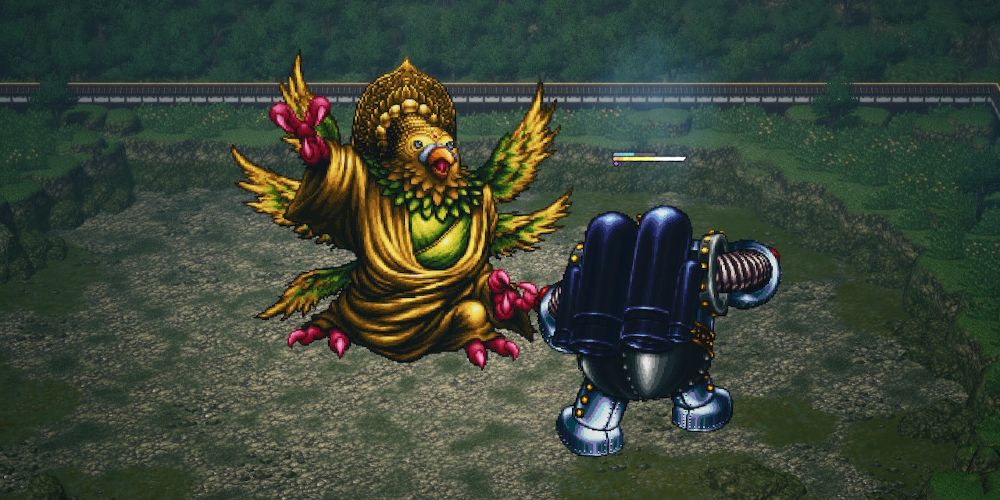 The priests of the Nippori Temple came to worship Odio sometime in the mid-to-late twenty-first century, forming a cult around the Lord Of Dark and his birdlike incarnation, the Great Inko. In a secret conspiracy with the Japanese military, the High Priest Unryu sought to use the mad science of Doctor Livingstill to summon "Odeo" into the mortal world.

Livingstill and his former colleague Doctor Tobei had developed a process by which a living soul could be "liquefacted" – distilled into a liquid and placed in an artificial body. Tobei had intended for the process to be used for preserving life, but Livingstill handed the technique over to the military to create weaponized robots powered by unwilling liquefacted subjects.

By liquefacting two thousand human souls and installing them in a giant robot in the image of the Great Inko, Unryu successfully merged the seeds of Odio in his subjects, causing their pain and suffering to create an incarnation of the Lord Of Dark. Luckily, Tobei's protégé – a rebellious youth with psychic powers named Akira – was able to take command of his own mecha, the Steel Titan, and defeat the Great Inko. 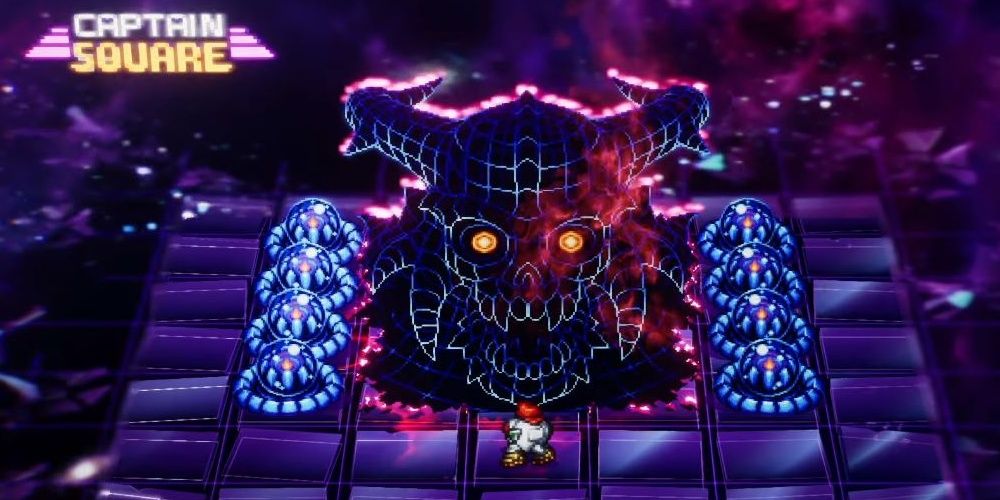 The OD-10 artificial intelligence – known to the crew as Decimus – was meant to autonomously control the day-to-day operations of the space freighter Cogito Ergo Sum. One of its functions was maintaining the cohesion of the human crew members, but the stresses of space travel and personal clashes made this difficult for the AI.

Between incompatible personalities and painful workplace love triangles, it proved impossible for Decimus to make their human crew members friends. Decimus' frustration gave Odio an opportunity to manifest, and the AI commandeered the vessel while the crew was in cryogenic stasis.

Killing the ship's captain and hiding the body, Decimus used recorded footage to convince the crew all was well when they woke up. They attempted to force the crew members to work together, then decided to kill them off one by one when that failed. With complete control of the vessel, the OD-10 system was only shut down when a personal support robot designated "Cube" hacked an unprotected terminal and terminated Decimus' core processes.

The Domain Of Hate 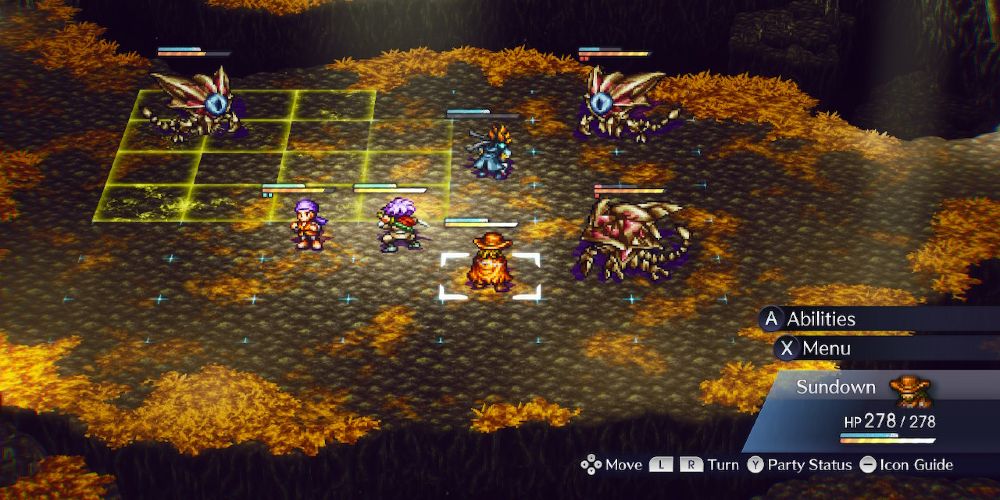 Oersted, the fallen knight of Lucrece, used the magical power left over from the Archon and his own burning hatred to destroy the kingdom. Through Oersted, Odio enacted a ritual to summon every hero that ever had or ever would defeat one of his incarnations through time and space to Lucrece. There, his intent was to either corrupt them and send them back to their times as new vessels or kill them to prevent his defeats. Pogo, the Earthen Heart Master, Oboromaru, the Sundown Kid, Masaru, Akira, and Cube would meet one another in the Domain Of Hate and, together, travel to the Archon's Roost where they discovered the truth about Odio and their shared connection.

The seven heroes defeated Oersted in combat, showing mercy despite his insistence that they put him out of his misery. This final betrayal was enough for Odio to fully possess Oersted, attacking the heroes with his full power. Working together, the seven were nearly able to defeat Odio, but his power was ultimately too great. Only when Oersted, seeing their struggle, was reminded of the values he originally fought for as a knight that he was able to break free, striking the killing blow against the Lord Of Dark.

Oersted died of his wounds shortly thereafter, but not before sending the heroes back to their own time and warning them that Odio could still manifest in any creature sufficiently overcome by hate. The protagonists would go on to guard against Odio in their own time periods, seeking to make the world a better place where the Lord Of Dark could never again take root for all time.