If you like a good dose of lore in your RPGs, Lost Ark certainly delivers. The exhaustive main storyline continues through the continents as you explore and level up, while a host of side quests enrich this further. But perhaps best of all are the little incidental tales you can find in the hidden stories across each area.

Shushire has the standard seven stories to uncover as you explore this frozen continent. Two of them span more than one area, with one requiring you to work your way through most of a dungeon to complete it. But they all have generous time constraints. To find any locations you may have missed, read our guide below.

A Letter To My Friend – Three-Part Hidden Story Location 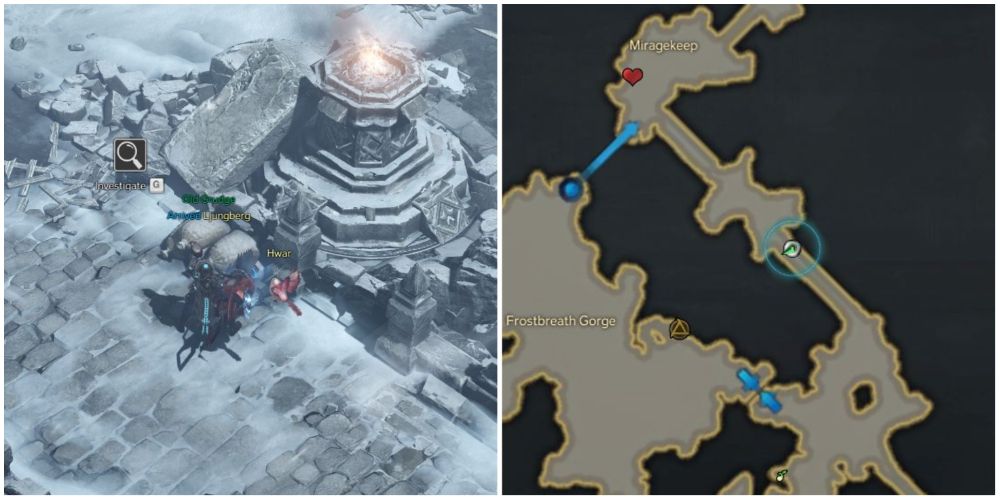 You’ll want to start this one at the Frostbreath Gorge Triport in Icewing Heights. But be aware that it is a three-part story, with the second two parts being inside the Maze of Mirrors. We suggest you’ve already completed that at least once before you attempt to complete this story, so you know the lay of the land. You have a generous one hour to get to part two inside the maze after collecting part one.

From the Triport, head a little southeast and make the jump down. At the bottom turn left (north) at your first opportunity, then follow the narrow path that heads down the stone steps northwest towards Miragekeep. At the bottom of the steps on the right of the path, just before the area opens out, you’ll see some sacks on the ground. Investigate here to begin the story. 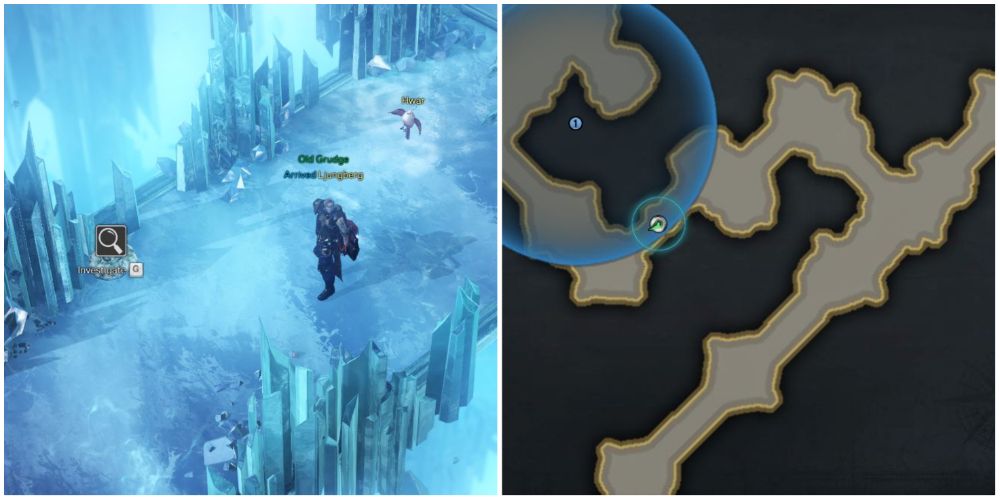 Had back the way you came up the steps, across the area there south, then along the long path that heads southeast to the Maze of Mirrors (or triport across if you’re worried about time). Enter the dungeon on either difficulty level. Follow the story as it takes you northeast, finally opening up a path that goes northwest. Keep following as it turns southwest into the next room, then southwest again. Between these two rooms, you’ll find part two of the story, written on a stone slab. From here, once again, you have a generous one hour to find the final chapter. 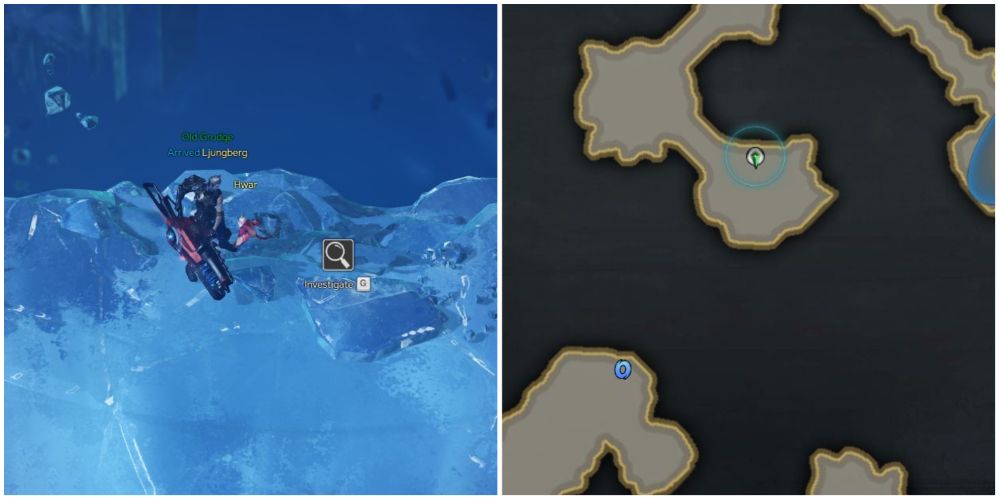 Now complete this area of the Maze of Mirrors by defeating the Maze Gatekeeper. This opens a new pathway that takes you northeast. You’ll be immediately attacked when you arrive in the next room. Once you defeat these insects, walk to the north side of the room, and you’ll see a book on the floor. This contains a short note that concludes A Letter to my Friend. 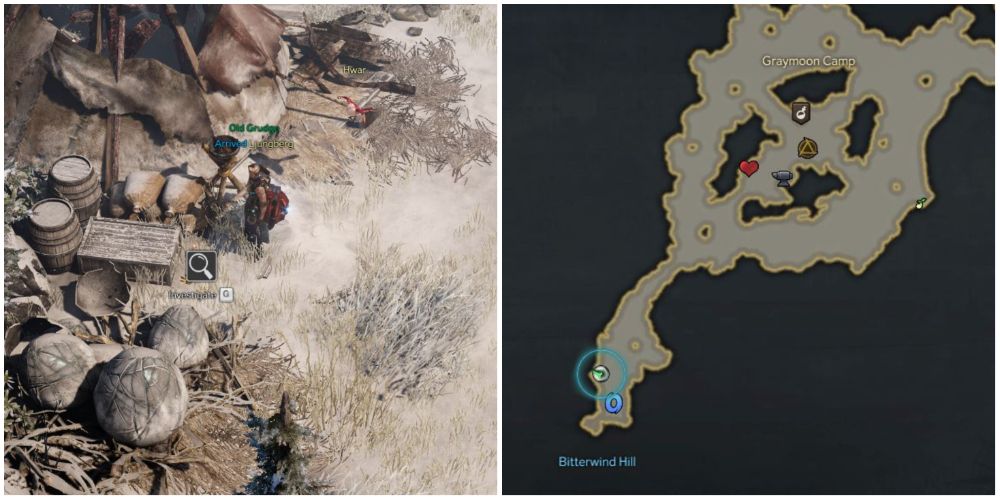 This is a three-part story, with the first two parts quite a distance from each other in Iceblood Plateau – and the third in neighbouring area Icewing Heights. You have a generous 20 minutes to get to each next clue. But do be aware that if you don’t make it to the next clue in time, you’ll have to start over. Part one is just on the left of the path as you enter Iceblood Plateau. You’ll see a burned tent with an unlit torch just outside it. There are some glowing animal tracks on the floor by the torch. Investigate them to start the story. 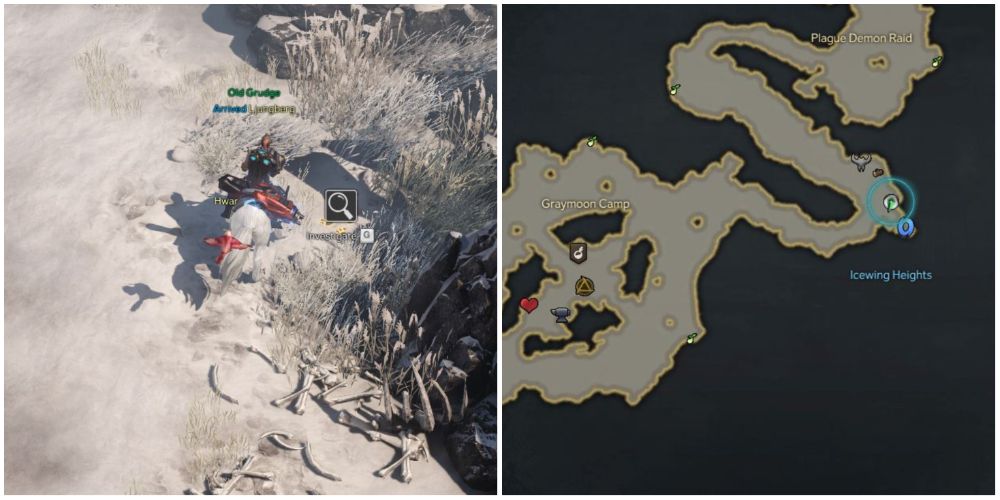 Mount up and ride northeast through Graymoon Camp, then east towards the portal to Icewing Heights. Just before the portal, north of the path, you’ll see scattered animal bones – and just above them another set of glowing animal tracks. Click them to complete part two of your search. 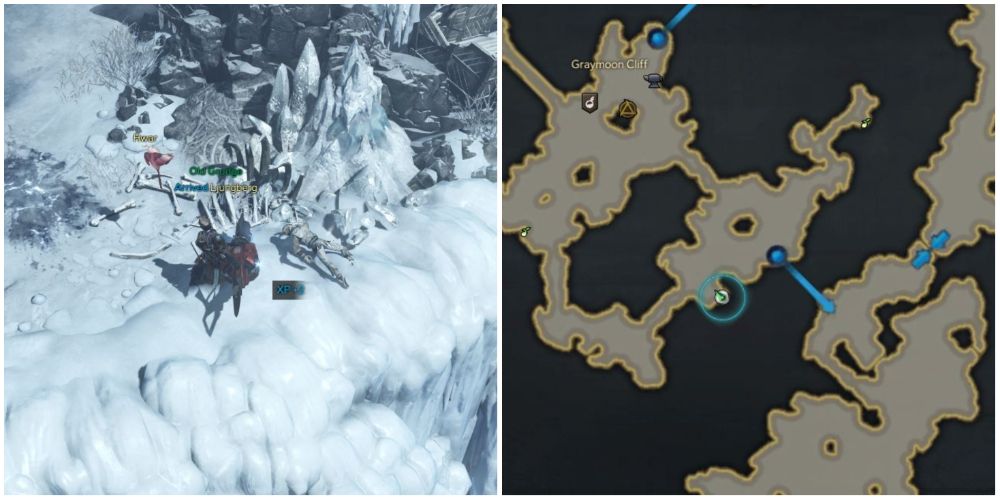 Finally, head through the portal into Icewing Heights – or better still, if you’ve already explored the area (advisable), teleport over to the Gray Wolves Camp Triport there. Leave this area by the icy bridge southeast and keep going across the area you arrive in towards the rope slide on the map. Don’t take it – instead, follow the cliff edge west until you see a frozen body on the ground. Investigate the body for this tale’s sad conclusion. 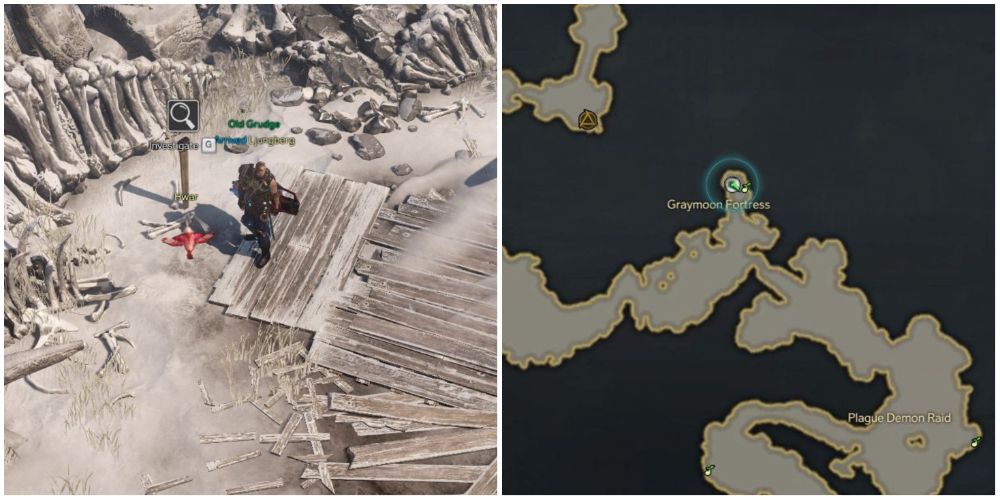 Teleport to the Frostpeak Temple Entrance Triport in the north of Iceblood Plateau. Leave the area west and follow the path as it turns south and then east through Plague Demon Territory. When you finally arrive at Graymoon Fortress, look for a gap in the wooden defences that leads up a slope north to a small supply area. The supplies are on the right, but there’s a large metal spike stuck in the ground on the left-hand side. Investigate this to find out the story of Faith’s Edge. 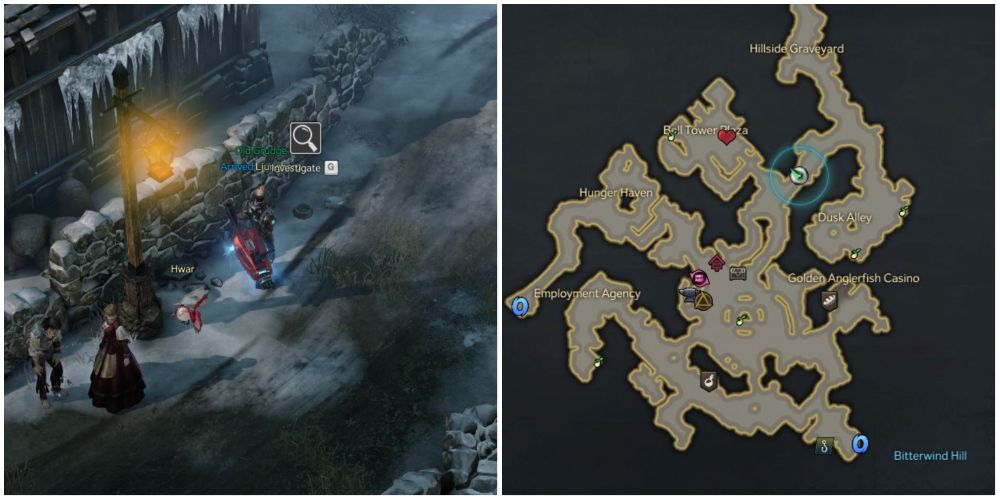 Start from the Rigens Village Triport and take either of the paths leading to the northeast. Pass the steps leading to Bell Tower Plaza and keep going northeast past the couple standing by the lamppost on your left. Just past them, you’ll see a note on the floor next to a cat’s water bowl. Read it to find out more about the foul-mouthed baker. 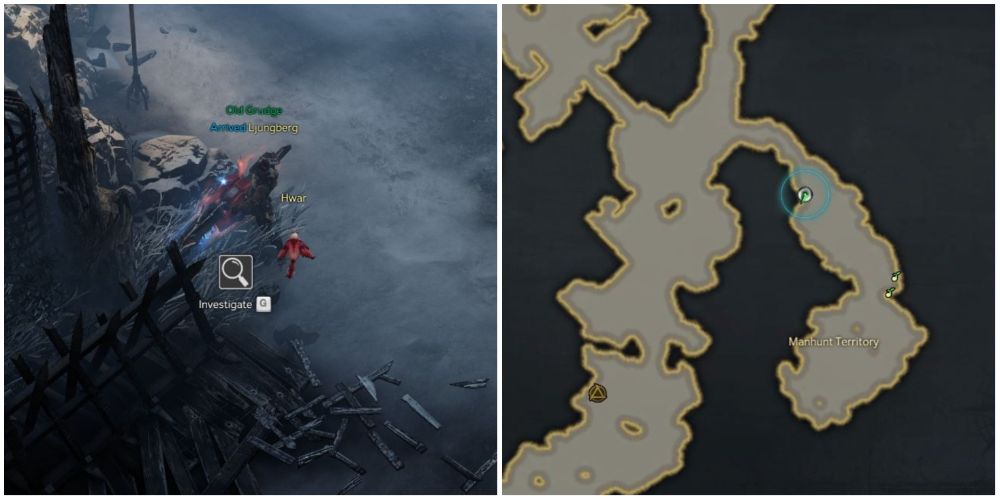 Portal over to the Southern Basin Triport in the southeast of Bitterwind Hill. Head north between the pillars and up through the deserted village, turning east just after you pass the broken well. Follow the trail as it starts to turn southeast, keeping to your right-hand side (west) as you go. As the path starts to widen out a little, you’ll find this hidden story on the ground just past a burning torch and a tall cage. 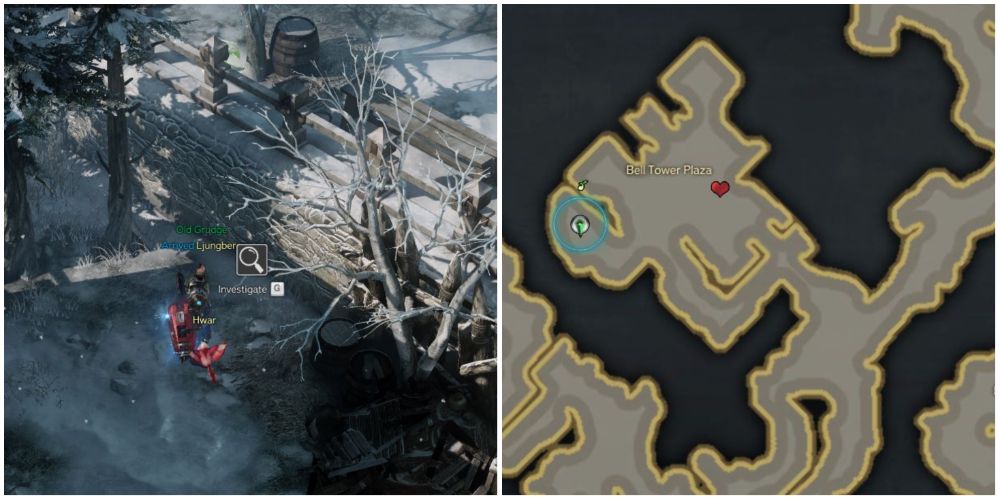 This hidden story is in two parts. After finding part one, you need to find part two within 20 minutes, or you’ll have to start again. But as both parts are in Rigens Village, there is no time pressure. To find part one, head northeast from the Rigens Village Triport and then northwest down the steps into Bell Tower Plaza. Stick to the left past the people in the middle of the plaza and look for some more wooden steps heading down. Turn right at the bottom, and you’ll find part one of the story scrawled on the wall at the end by the two trees. 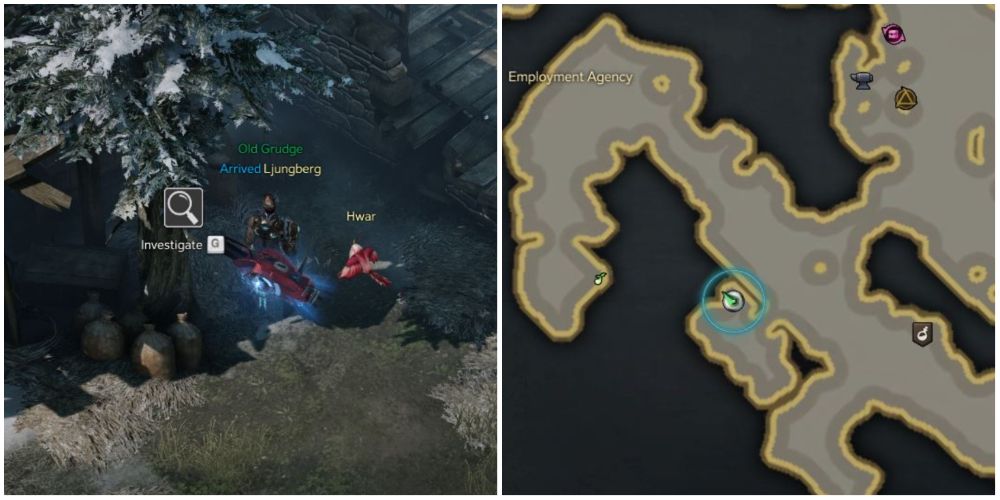 Now head back to the Triport and leave the village square down the steps leading southwest. At the bottom, head directly southwest once more and down another short set of wooden steps. Turn right at the bottom into the corner, where a piece of paper on the ground will conclude the story of the Shushire Boys. 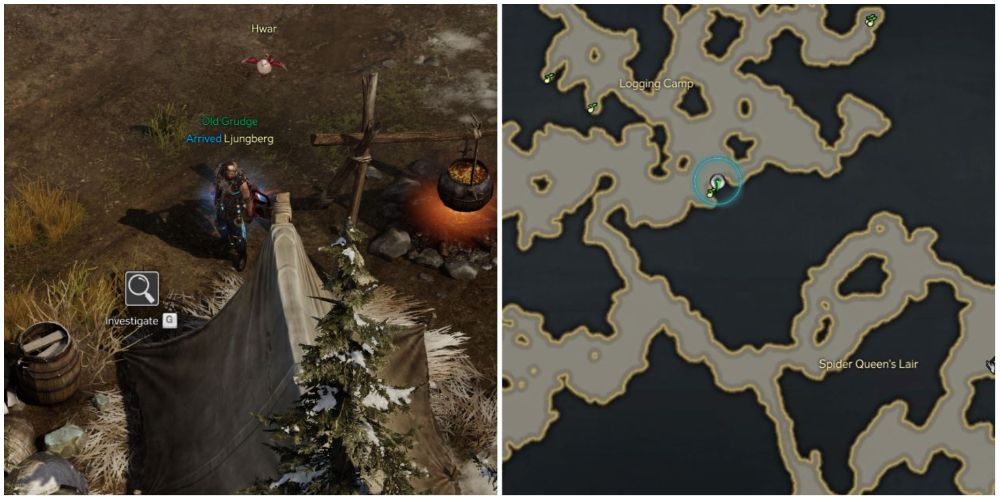 This is a three-part story, which gives you 20 minutes after reading each part to find the next one. All the parts are relatively close together in the Lake Eternity area, so this should be plenty of time. But do remember that if you fail to make it to the next part within the time limit, you’ll need to start again. Start the story by heading to the Logging Camp Triport. Leave it south into Logging Camp, heading left at the fork when you get to the tent and campfire. When you see a small burnt-out campfire head directly south – and you should come to another tent with a cauldron cooking over a fire. Investigate here, in front of the tent, to begin. 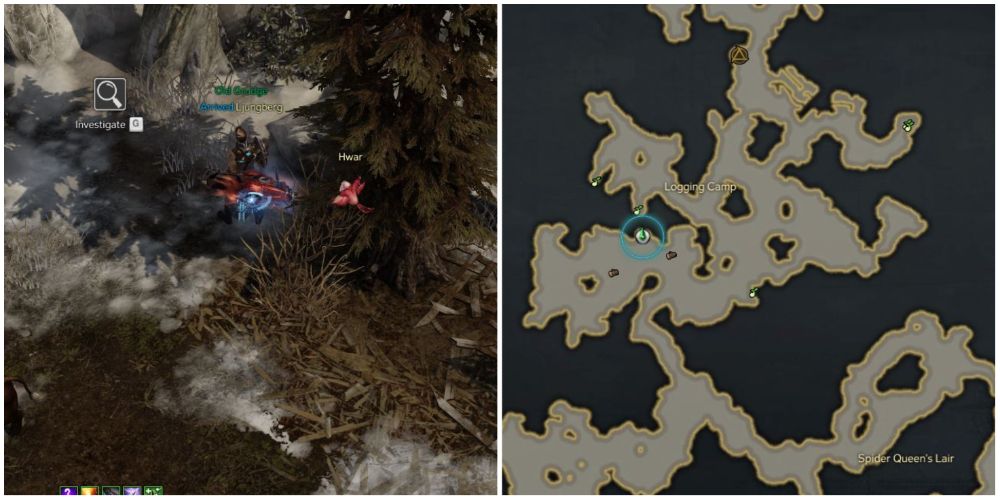 Staying in the Logging Camp, walk directly west. You’ll pass Adventurer Louis and get to a large snow-covered rock. Here, turn north, and you’ll come to a large axe in a wood stump. Walk a few paces to your left, between the trees, and you’ll see a book on the floor. Read it to conclude part two of the tale. 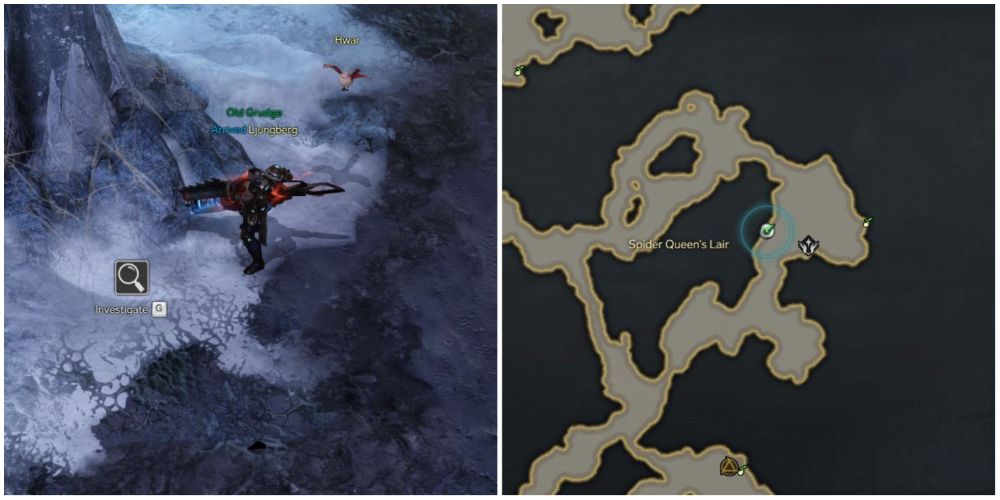 Finally, you need to head into the Spider Queen’s Lair itself. From the second part, head south out of the Logging Camp and follow the path southeast towards the lair. Take the left turn that goes east and work your way through the spiders, heading northeast. You’ll eventually arrive at the northern end of the lair proper. Once inside, follow the west wall until you see a blackened skull on the floor. Examine in to conclude Tarsila’s Lullaby.