Historic is a non-rotating Magic: The Gathering format made specifically for Arena. While Historic was originally implemented as a casual format for Arena players to make use of cards that had rotated out of Standard, the deck builds that have risen to the top of the format are anything but casual. In fact, they often require more foresight and decision branches than many Modern decks.

The biggest reason for the added difficulty in piloting these decks is the prevalence of combo in Historic. For those unaware, combo decks are builds that rely on assembling a handful of cards in order to trigger either an extremely powerful game-winning effect or an infinite loop that, in some cases, wins the game on the spot. Without further ado, let's take a closer look at some of the best combos available in this surprisingly complex format. 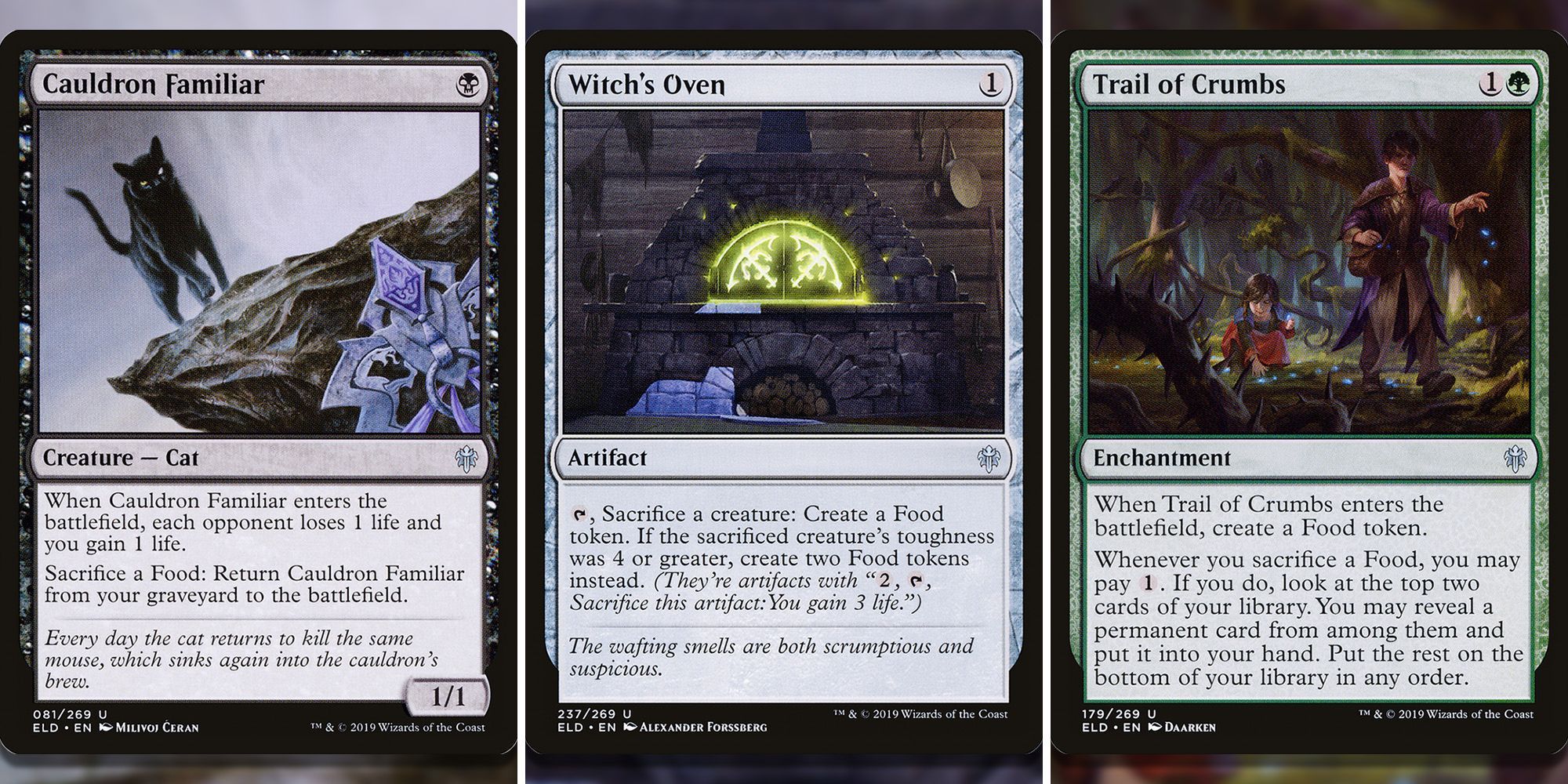 Although it's been through many changes, Golgari (green/black) Food is arguably one of the oldest combo decks available to Historic players. However, anyone who has tried their hand at the deck has likely discovered that properly piloting this combo engine is far from a walk in the park. Once you have assembled the cards above onto the battlefield, the deck works as follows. Each turn, you can use Witch's Oven to sacrifice Cauldron Familiar and generate a food token. Then, you can sacrifice the food token to return the Cauldron Familiar to the battlefield, draining your opponent for one life in the process.

This loop also provides you with an infinite chump blocker, effectively preventing one enemy creature from ever attacking you. Once you have Trail of Crumbs on the battlefield, you can pay one generic mana each time you use Cauldron Familiar to sacrifice a food token and draw a card during the loop as well. In other words, the deck's engine provides you with an infinite loop that drains a life, provides a chump blocker, and draws a card.

While this is certainly a nice combo to enact, it's a long way from winning you the game on the spot like many other combos are capable of doing. This is what makes Golgari Food such a difficult deck to pilot correctly. It's worth mentioning that Ravenous Squirrel is often an important player in working towards your eventual victory, as this little bugger is capable of growing to enormous heights while also providing you with a card draw out in case your first Trail of Crumbs is dismantled.

4 Dragon's Breath (Dragonstorm + Terror of the Peaks + Bladewing the Risen) 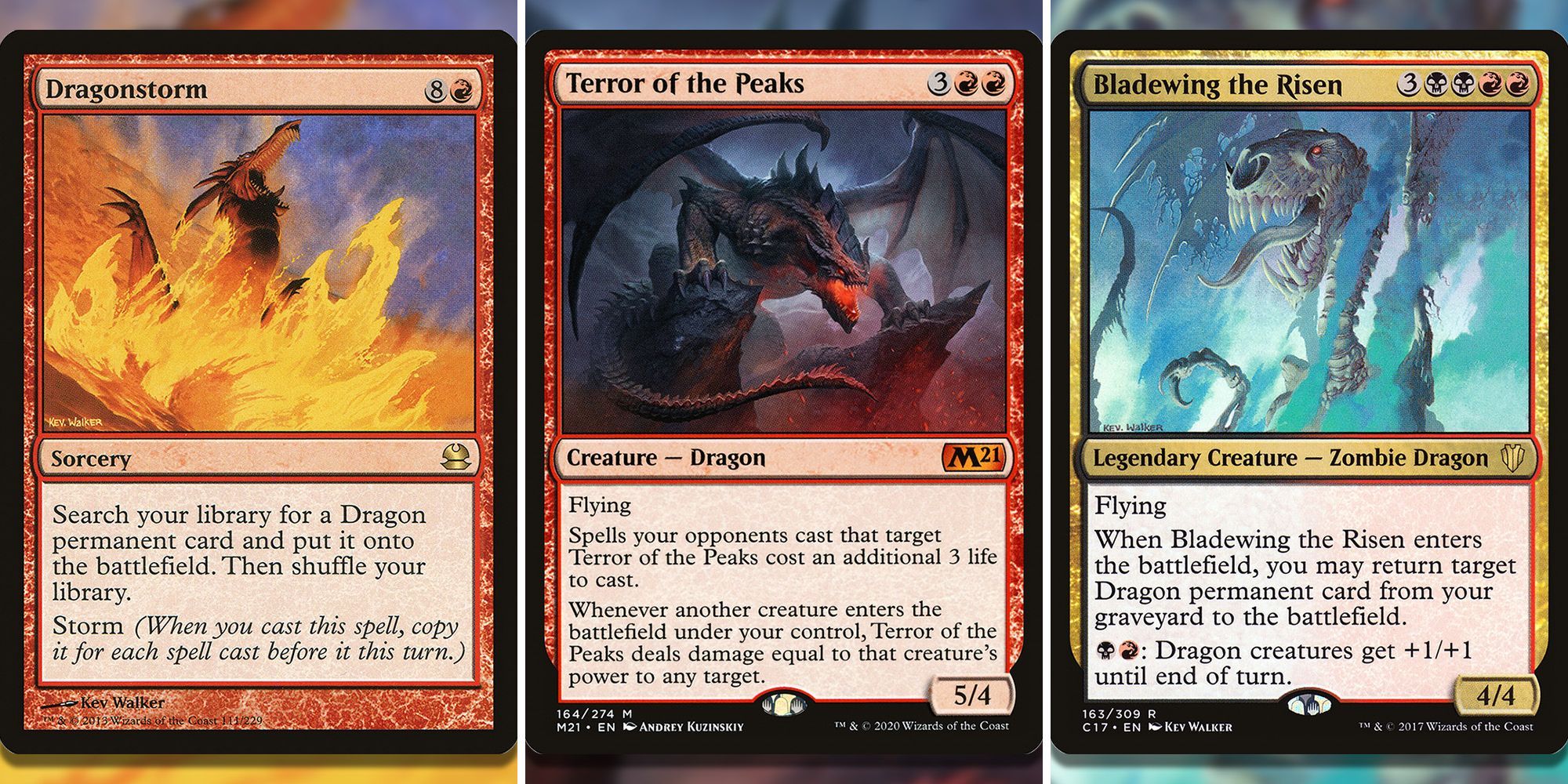 Dragonstorm is one of the oldest instant win combos present in Historic. Ever since the release of Strixhaven's Mystical Archive about a year ago, this combo has terrorized the best-of-one Historic ladder with no remorse. While it's not a part of the actual combo, the card that makes this deck so effective and consistent is Faithless Looting. The deck features a number of other looting (draw, then discard) effects, but none come close to the power of this cheap red instant. After all, Faithless Looting is banned in Modern. 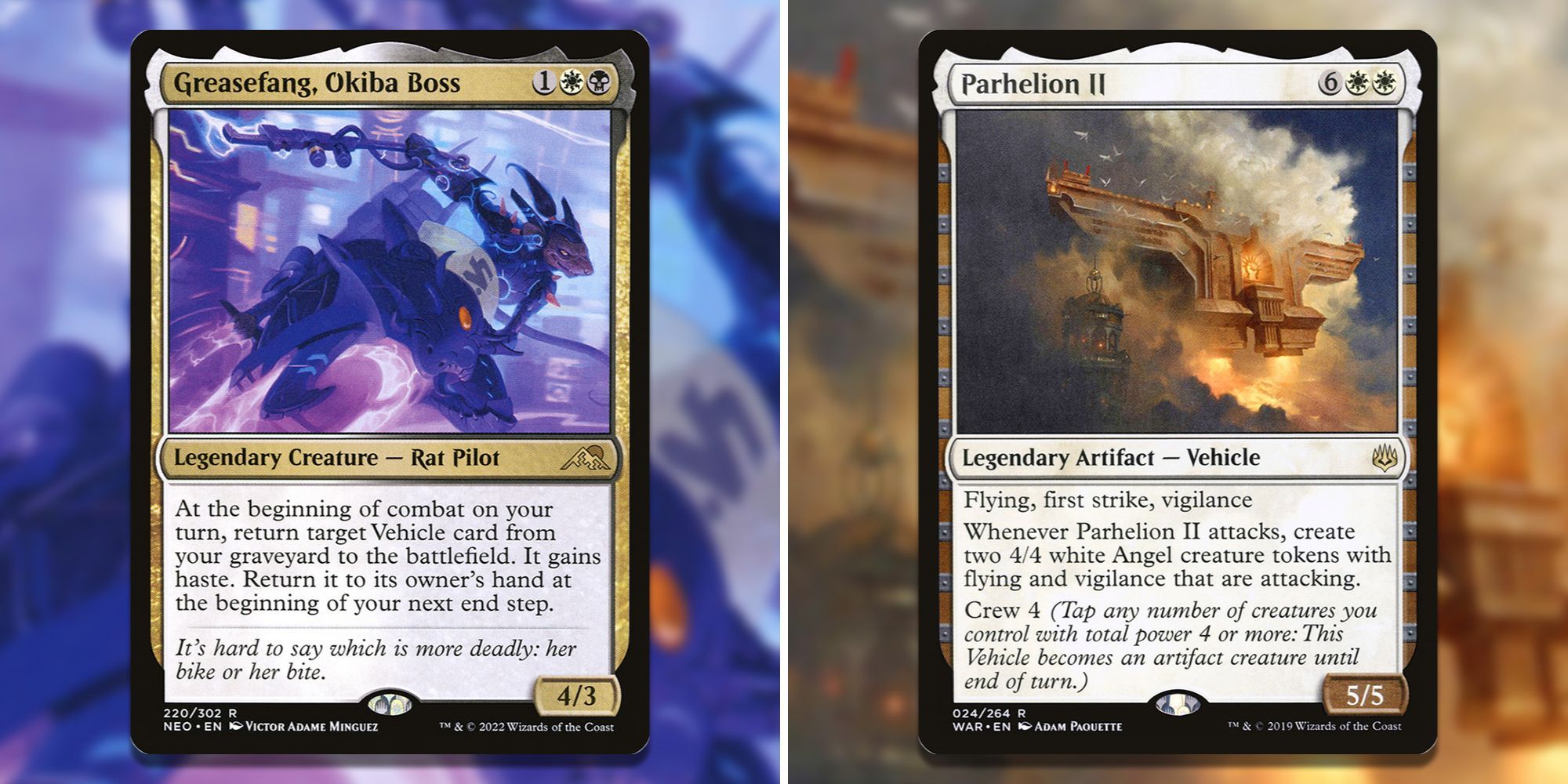 For players looking for a more laid back combo engine, Mardu (white/red/black) Greasefang is the deck of choice. While this combo doesn't guarantee a win on the spot, successfully enacting the combo will lead to victory on the very next turn 95 percent of the time. The goal here is simple: place a Parhelion II in your graveyard on the first two turns of the game by using cards like Stitcher's Supplier, Faithless Looting, and Goblin Engineer. Then, on turn three cast your Greasefang, Okiba Boss, go to combat and bring the Parhelion II out of the graveyard, pilot it with Greasefang, and attack for 13 in the air while leaving behind two 4/4 flying Angel tokens.

As you can imagine, there aren't many decks that can come back from such a devastating combat step. If there is such a thing as a beginner's combo deck, Mardu Greasefang is it. Additionally, this is also a popular combo deck in Explorer at the moment, so spending your wildcards on it will allow you to play the deck across multiple formats. 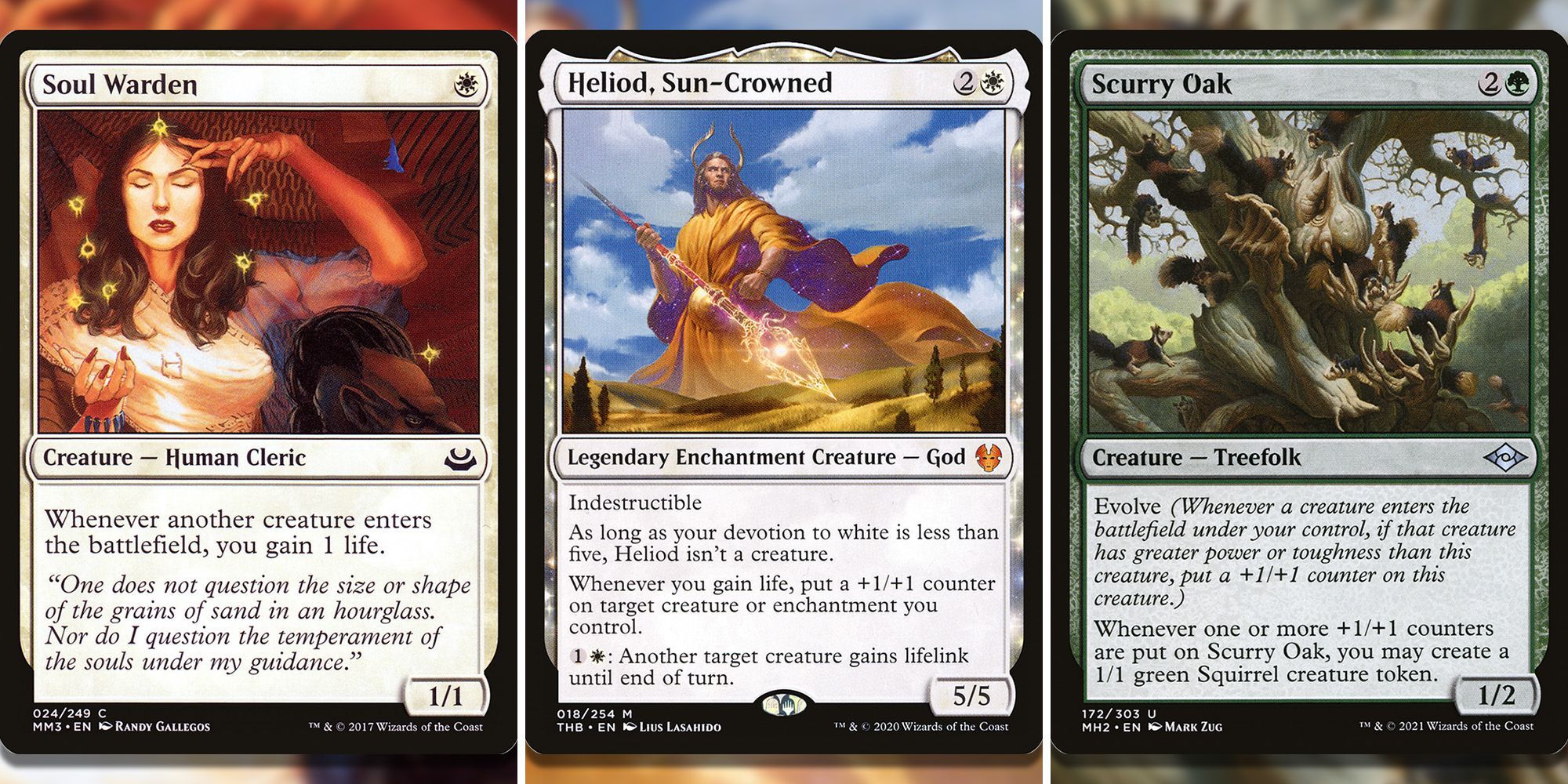 In case you were wondering, Squirrels are indeed somehow a part of two popular combos in Historic. Heliod Company is a combo deck that not only generates its pilot infinite life but infinite squirrels to boot. The combo works by assembling the three cards mentioned above onto the battlefield. We can usually rely on Collected Company to find two of them, and the third is often already present on the board thanks to there being ten sisters (creatures that gain us one life when another creature enters the battlefield) in the deck.

The combo works as follows. First, a creature enters the battlefield. Then, the sister triggers gain us one life. As a result, Heliod, Sun-Crowned supplies a counter that is placed on Scurry Oak. Then, Scurry Oak creates a Squirrel token, bringing us back to a creature entering the battlefield. You can loop this combo an infinite number of times in order to generate infinite tokens and infinite life. If your stubborn opponent refuses to concede after the combo is enacted, you can take them out with your infinite squirrel tokens on the following turn. 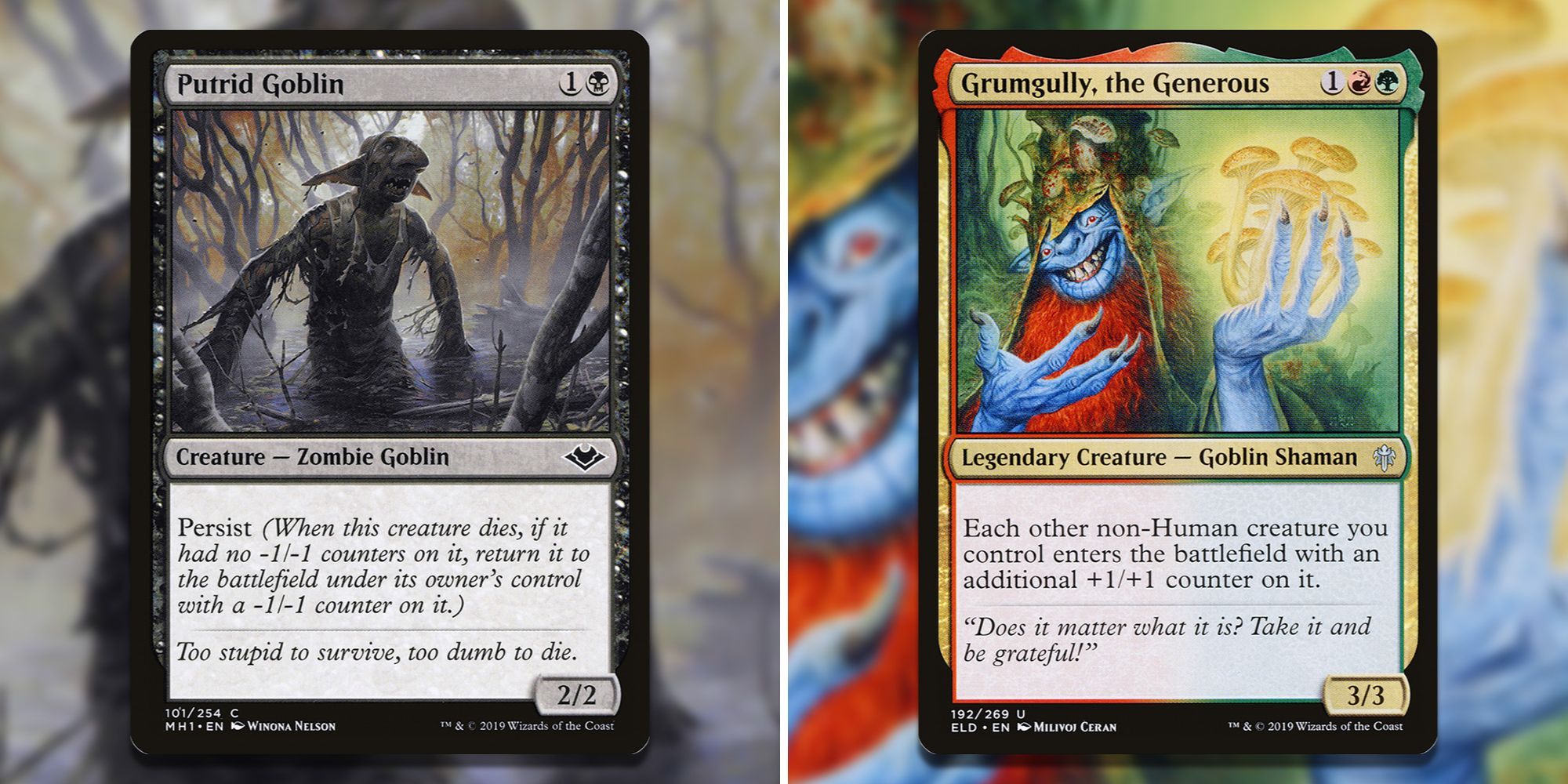 Knowledgable Historic players might have expected Jeskai (white/red/blue) Creativity to be at the top of this list, but a new combo deck has recently emerged that we would rather mention. Goblin Revels is a Historic deck that uses the newly released card Cabaretti Revels from Alchemy: New Capenna in order to flood the board with Goblins that can provide an "instant win" combo. The two absolutely key pieces here are Putrid Goblin and Grumgully, the Generous.

Thanks to the counter that Grumgully provides Putrid Goblin, the Putrid Goblin -1/-1 persist counter it should gain when returning to the battlefield is canceled out. Consequently, the new Putrid Goblin can be used as infinite sacrifice fodder for a card like Sling-Gang Lieutenant which then provides infinite damage. However, that's not the only combo this deck is capable of. Having Skirk Prospector on the battlefield for this loop provides infinite mana which you can use to get instant kills using Pashalik Mons as well. After a long hiatus from Historic, Goblins have come back with a vengeance by taking the number one spot on the ladder.