Blue is an excellent support color in Magic: The Gathering and it's one of the most feared colors to go against. It's common for players to splash blue into their decks because it does so many things well. A little known secret is that mono-blue creatures make for great commanders for competitive Commander, or cEDH.

Blue commanders hide many tricks up their sleeves such as drawing extra cards, taking extra turns, and becoming a copy of other creatures. These legendary creatures make for powerful strategies and can win games before your opponents have set up their side of the battlefield. 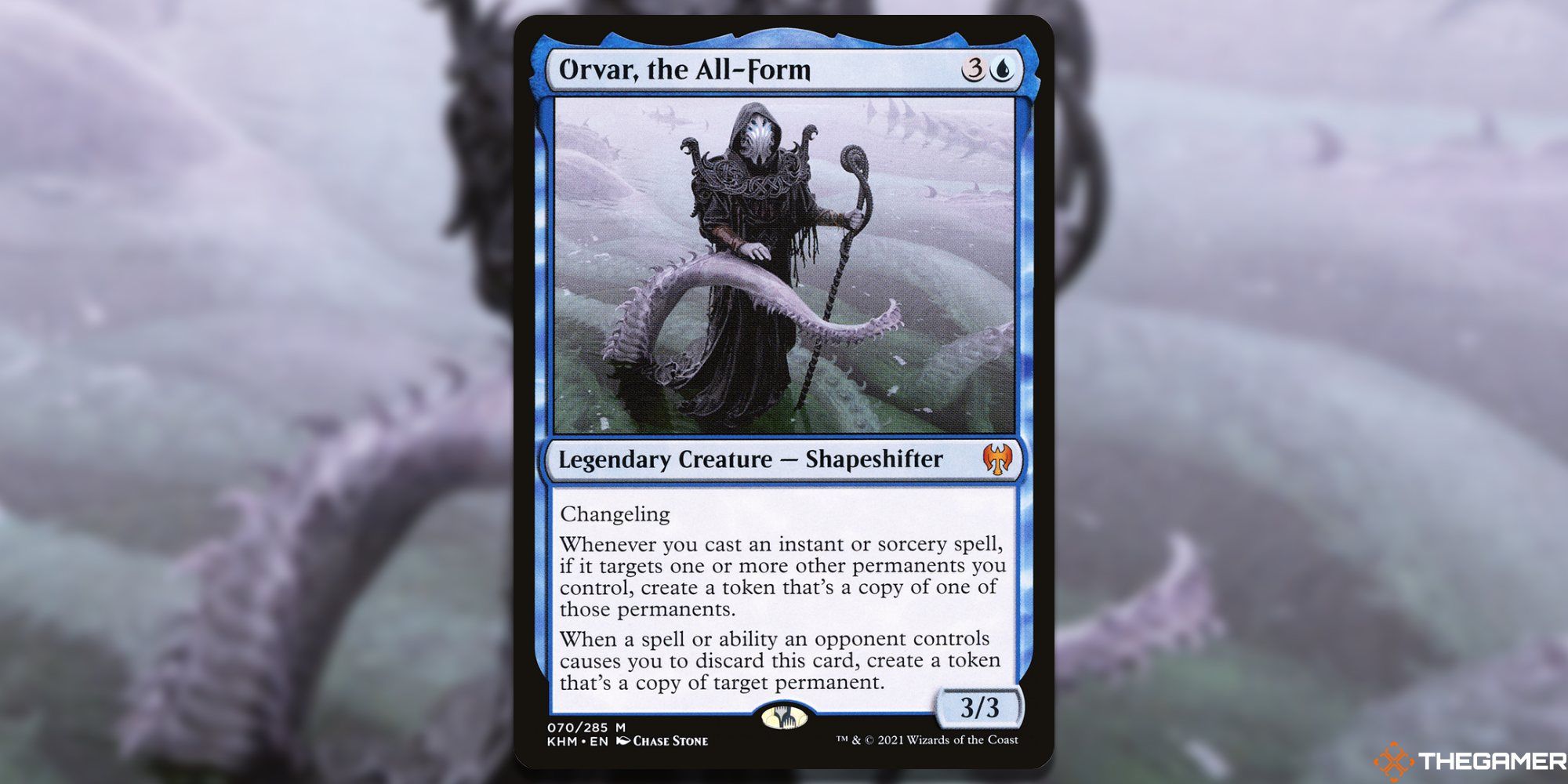 Kaldheim added to one solid Commander strategy with Orvar, which is copying permanents. Orvar goes above and beyond copying permanents, however. With the right build, Orvar creates a combo that wins the game in one turn.

Furthermore, this commander copies permanents you control at instant speed, making for plenty of combat and end-of-turn tricks. Throw Spellseeker in, and, along with the right instants and sorceries into your deck, you'll have all the cards you need for a combo. 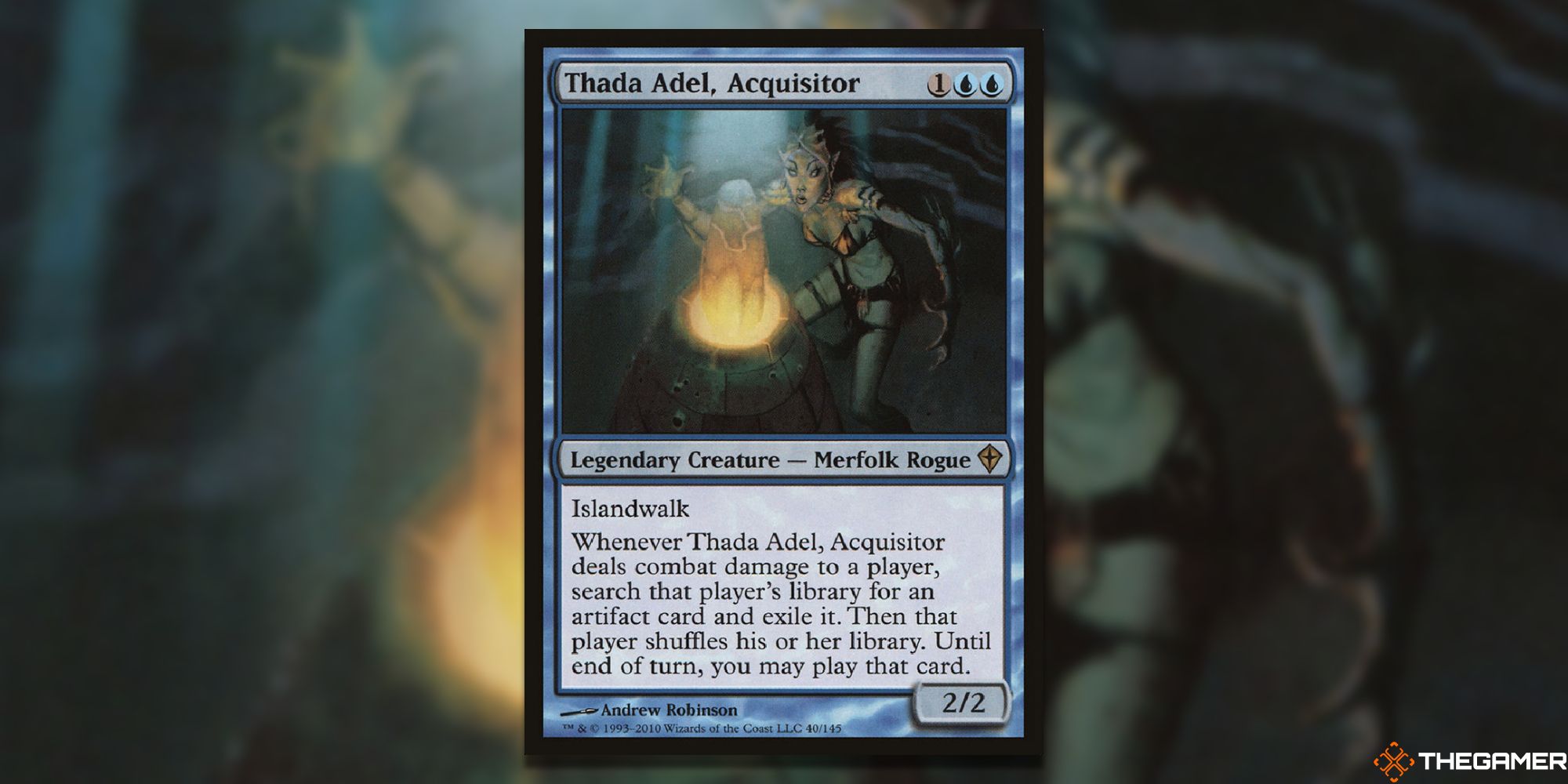 Artifacts are the linchpin in Commander, especially cEDH. So, why not steal key artifacts from your opponents to give yourself all the mana acceleration you could possibly need?

Thada Adel comes out early – earlier with the right mana ramp – because of her low mana value. Build your deck with the right equipment to ensure Thada Adel connects every time she attacks, and you'll end the game sooner than it began. 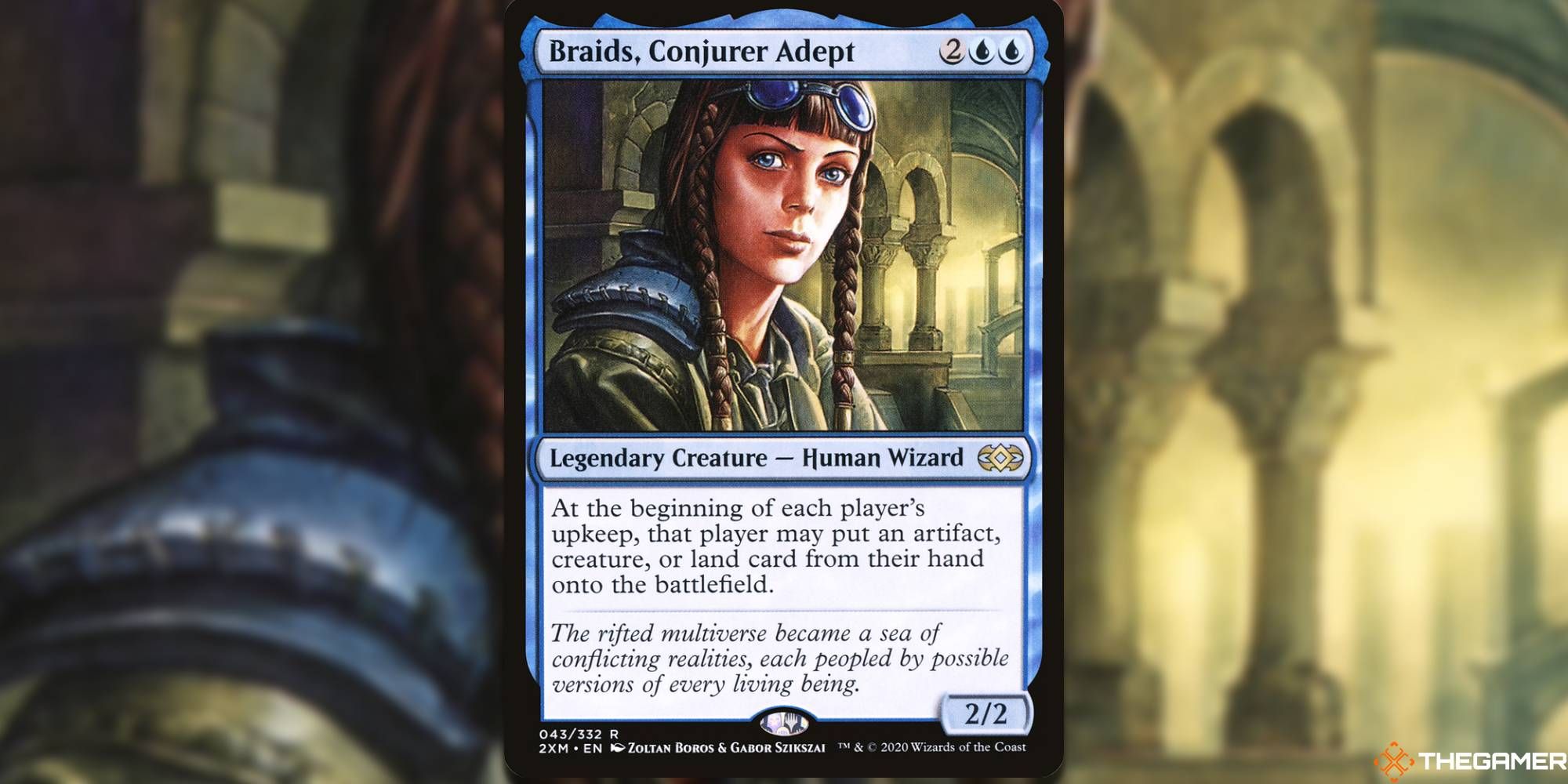 Does Braids' ability benefit your opponents too? It sure does. However, build your deck properly and everything your opponents play become yours. Throw Agent of Treachery into your deck and other similar cards to steal the very things your opponents are putting into play.

Run a giant creature like Blightsteel Colossus to steal the game, and your opponents will quickly learn that you were not actually helping them at all. 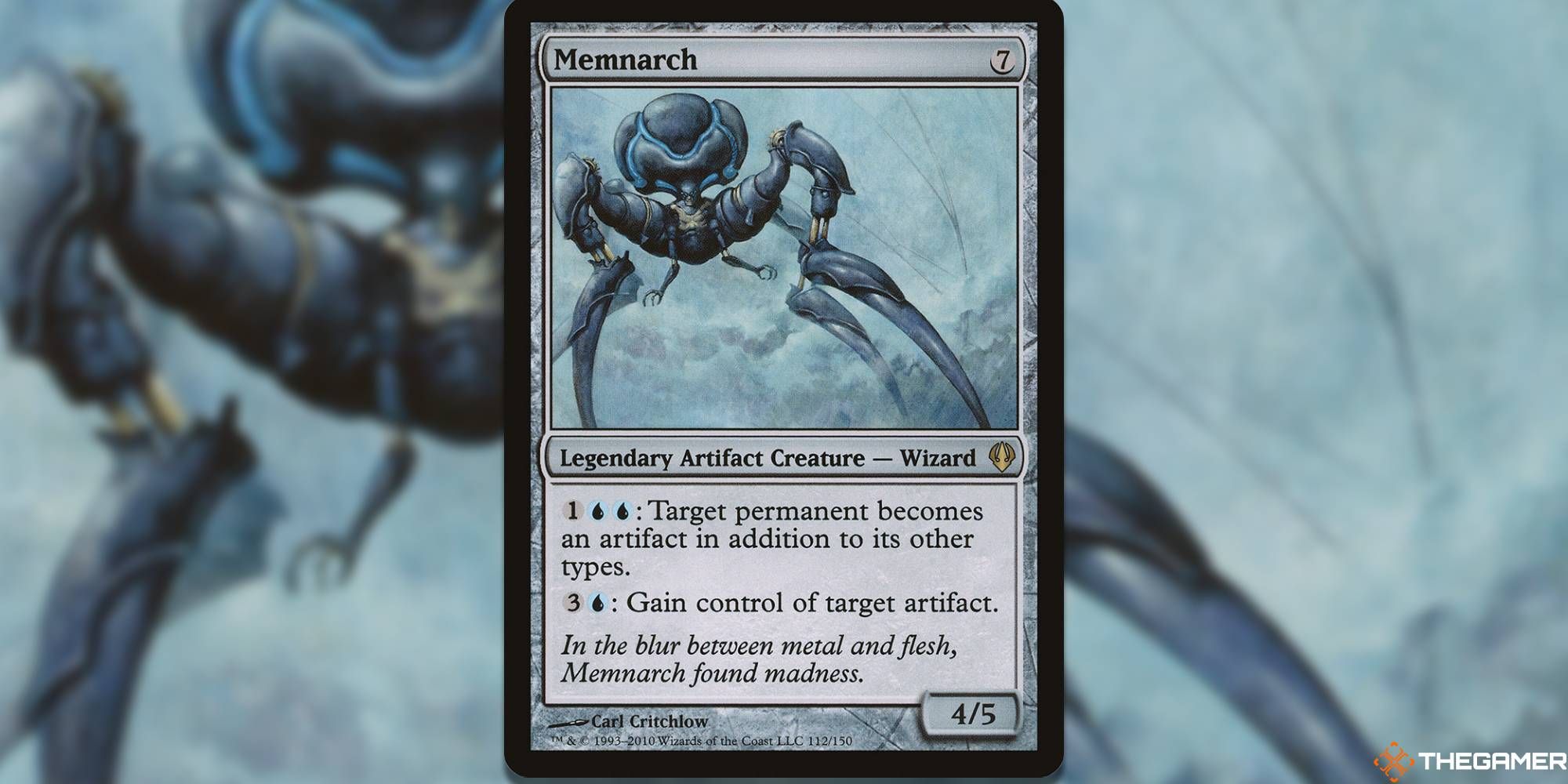 Stealing permanents is more than a solid strategy, it's fun seeing the frustration on your opponent's face when their permanents find their way onto your side of the battlefield. Additionally, cEDH uses a high number of artifacts, so you won't have to use Memnarch's first ability unless they have something threatening.

Seven mana isn't difficult to get to in cEDH either, so don't fret about Memnarch's "high mana cost." 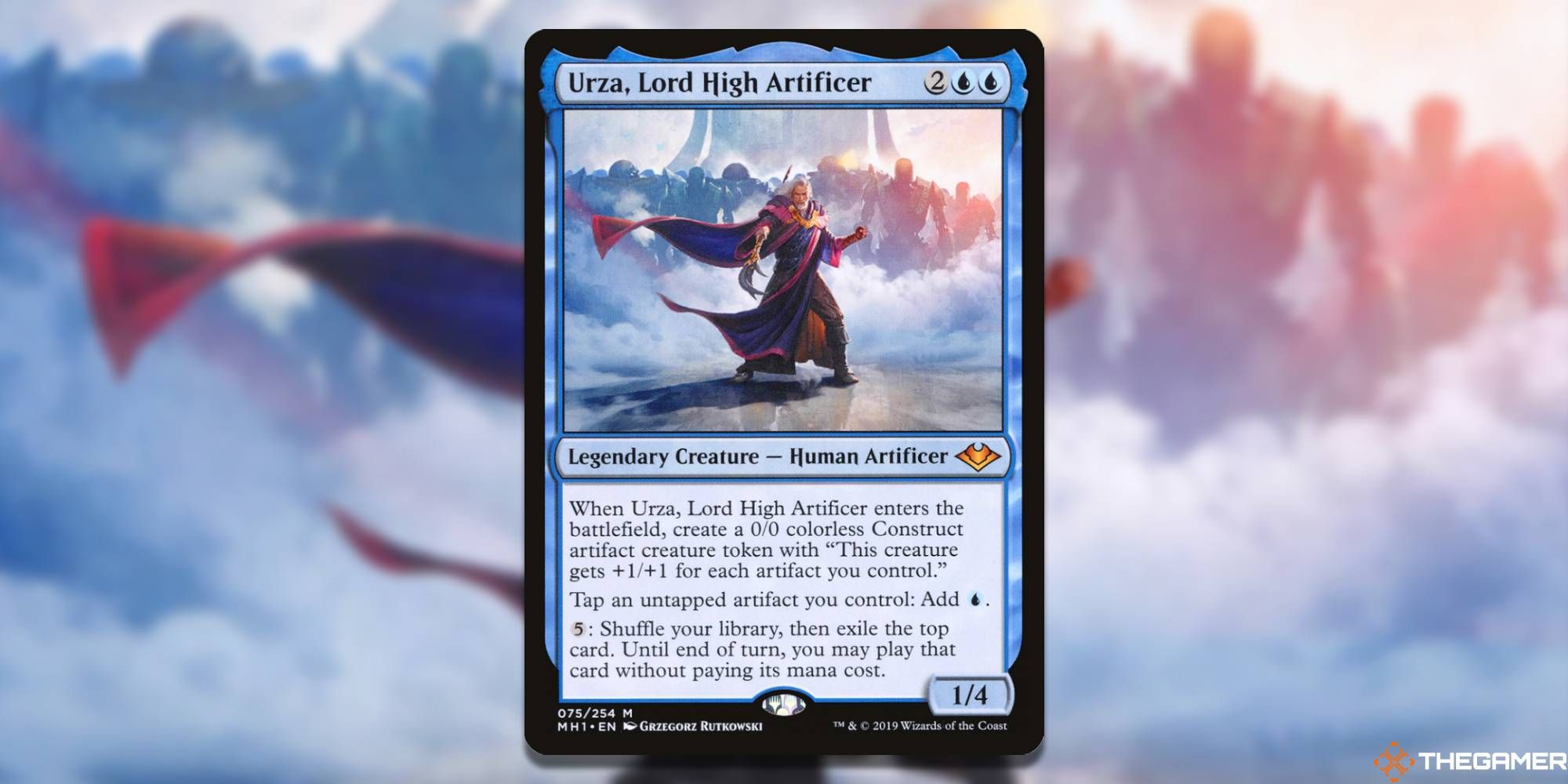 The leader of one-half of The Brothers' War is a threatening sight the moment he resolves. Firstly, he creates a lowly 0/0 artifact creature, but that creature only gets stronger with each artifact you have in play and then it, along with other artifacts you control, produces blue mana.

If you play a ton of low-cost artifacts, you'll also have a bunch of low-cost mana rocks and all the mana in the world. But wait, there's more: his last ability lets you cheat cards from your library into play at instant speed. He's the commander that keeps on giving. 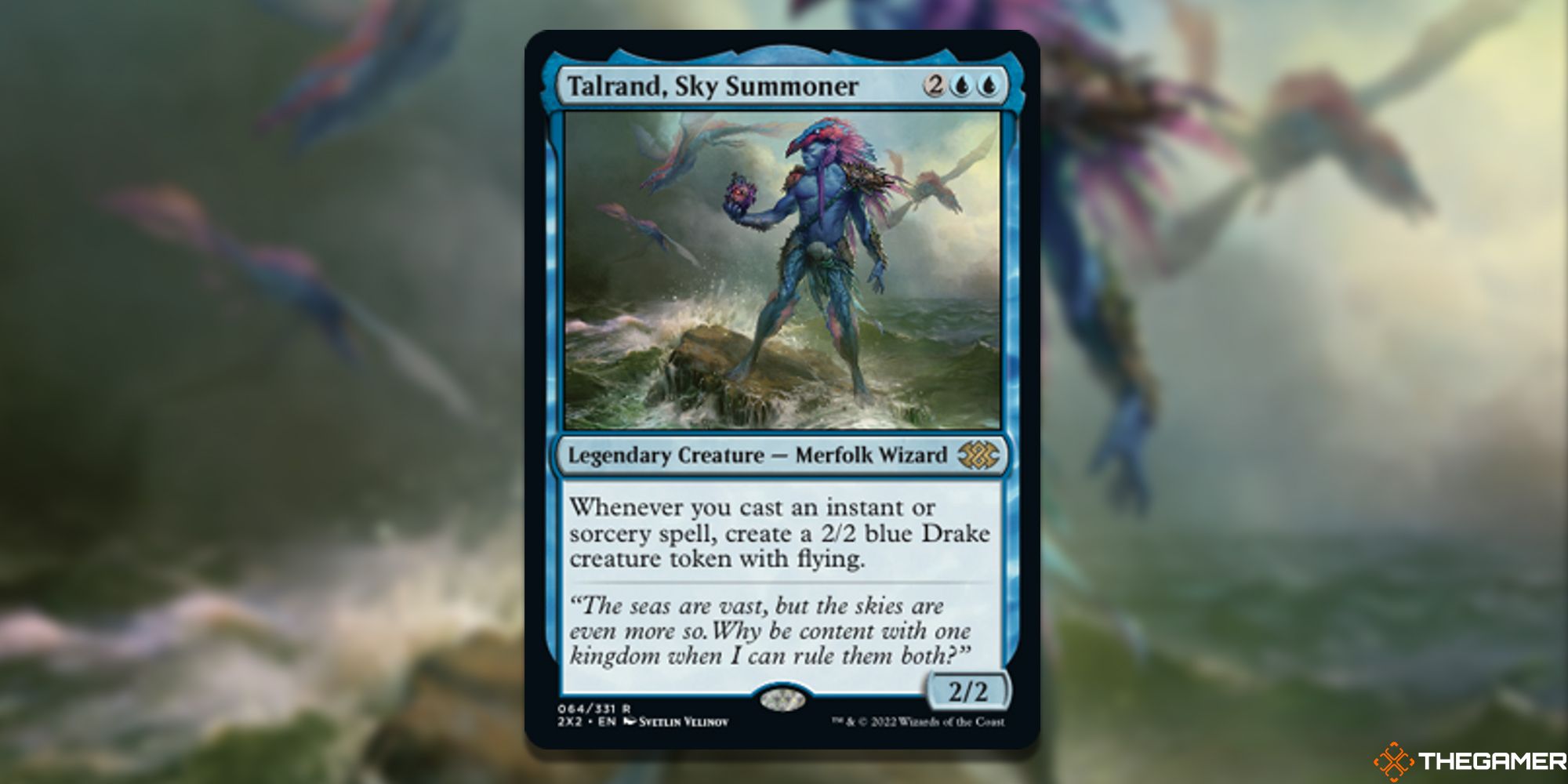 The best commander is the kind that triggers from spells you're already playing. Mono-Blue decks are already going to have massive amounts of instants and sorceries, which feeds into Talrand and his ability to summon Drakes.

Talrand lets you choose one of two significant strategies: aggro or tempo. He builds his army of Drakes, overwhelming your opponent while you slow down their plays with various spells, in turn building your army.

4 Emry, Lurker Of The Loch 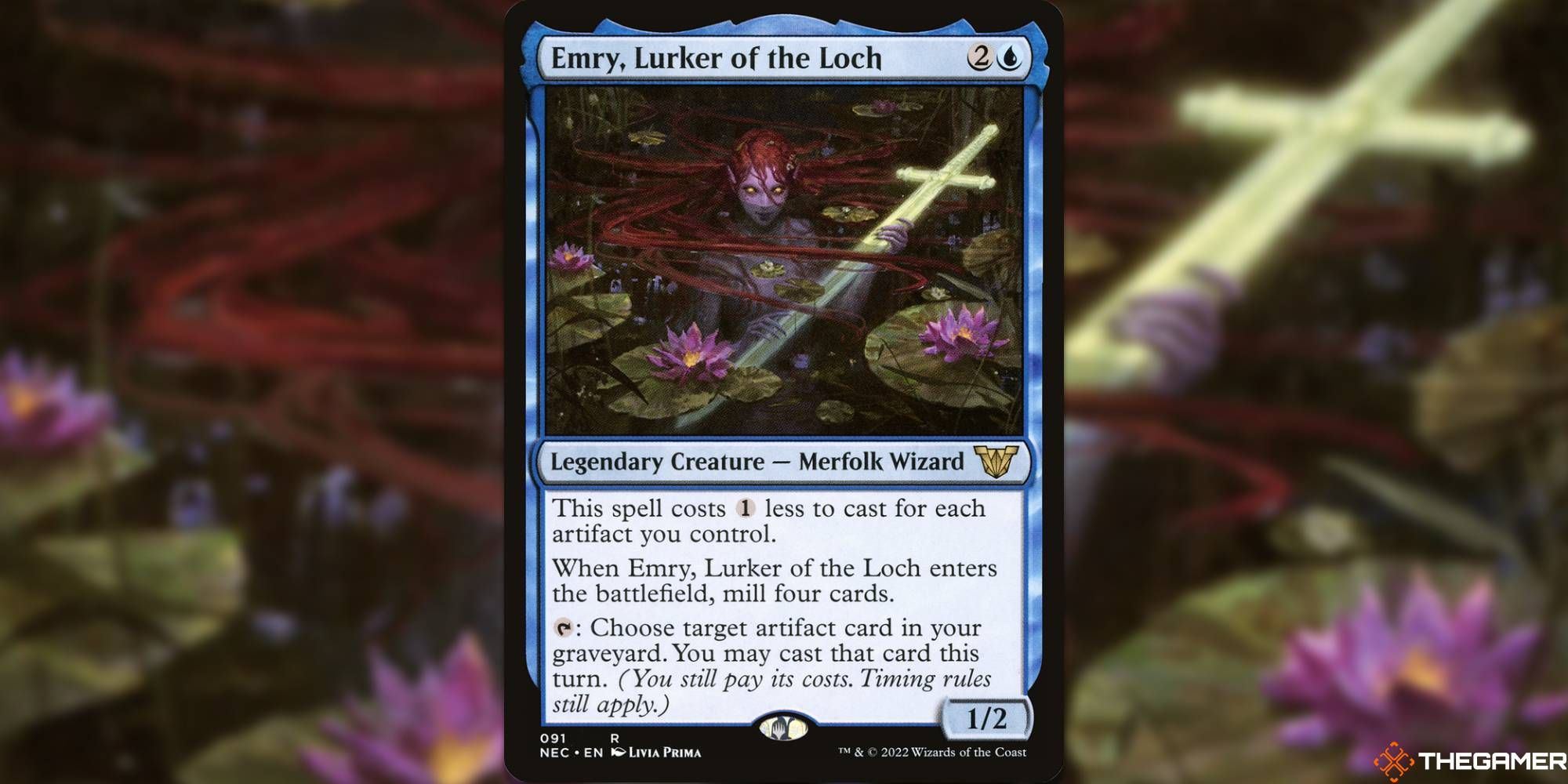 If you couldn't tell, artifacts are a common theme for blue's slice of the color pie. Throne of Eldraine gave players a lot of powerful cards, and Emry is no exception. It won't be difficult for the Lurker of the Loch to only cost one blue mana with the right amount of artifacts.

There are plenty of inexpensive artifacts that Emry can get in the early game and even more ways to abuse her ability. Even though you have to pay the mana cost of the artifact you're casting from the graveyard, it won't be difficult. 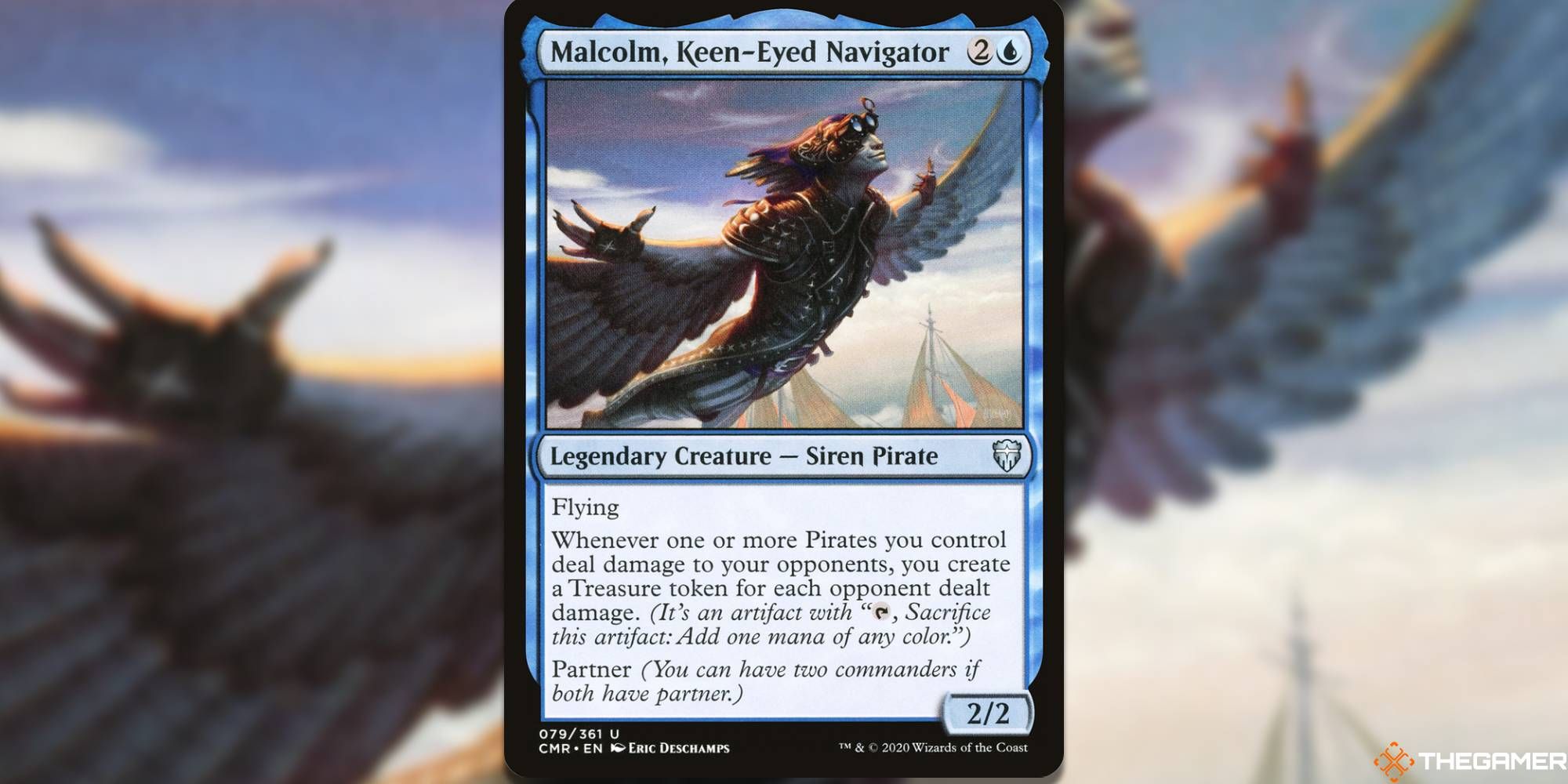 Partner was a mechanic heavily featured in Commander Legends and reappeared a few times afterwards. This lets you play two commanders, which is powerful, but Malcolm, Keen-Eyed Navigator is already great on his own in cEDH, because he racks up mana for you in the form of treasure tokens.

With the ability to fly, his attacks get through fairly frequently. Once you've attacked enough, you'll have plenty of mana to cast even bigger threats.

2 Sakashima Of A Thousand Faces 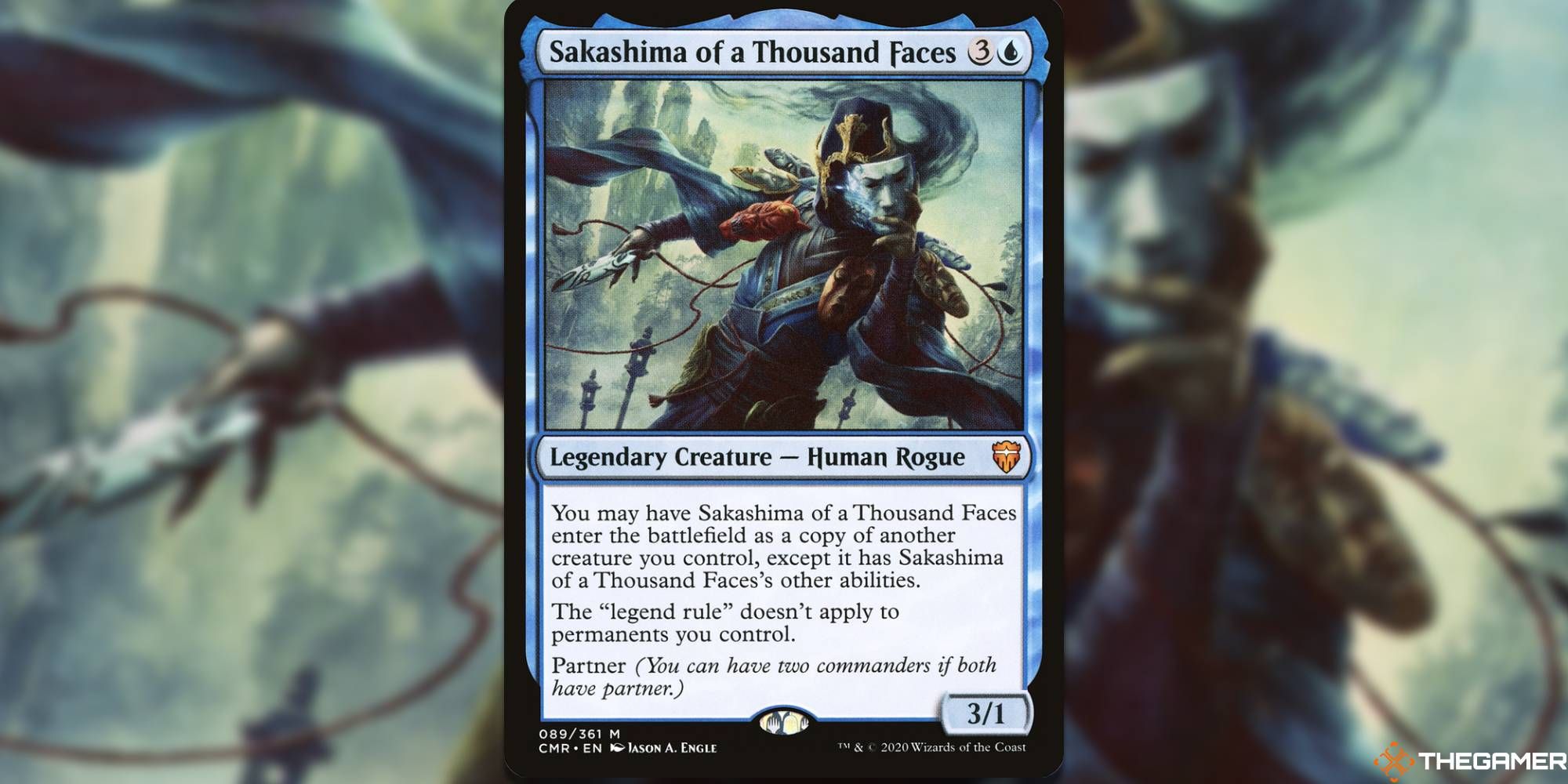 Malcolm, Keen-Eyed Navigator can't be mentioned without Sakashima of a Thousand Faces being brought into the discussion. They can be partners after all. While you will likely copy Malcolm, Sakashima can copy any creature you control. He's easily one of the most powerful creatures with partner.

So, bide your time with him and try to get him onto the battlefield at the most opportune moment. The best strategy is copying a creature that significantly benefits you in the same way Malcolm does. Something like Fallen Shinobi could be back-breaking for your opponent. 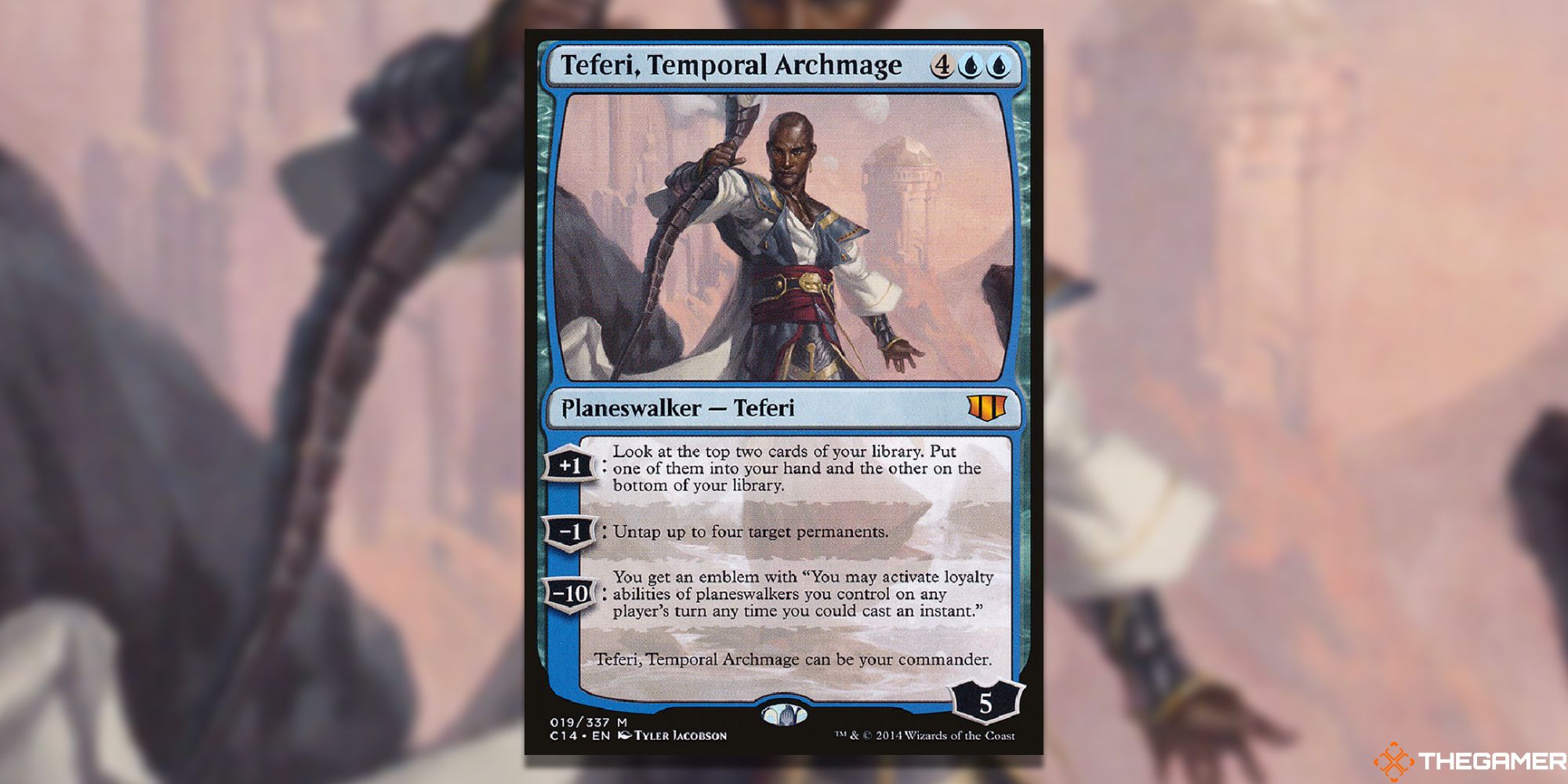 A Planeswalker as a commander? Why yes, and when Commander 2014 was released, Teferi, Temporal Archmage was the best of the five mono-colored Planeswalkers in the set. His first ability is good, but the second two are what made him outstanding.

Minus one loyalty, and he essentially only costs two mana. Untapping four permanents in a turn is a big deal. If you're able to acquire his emblem, you can use your Planeswalkers at instant speed. That's the dream, especially when playing a planeswalker-heavy deck.